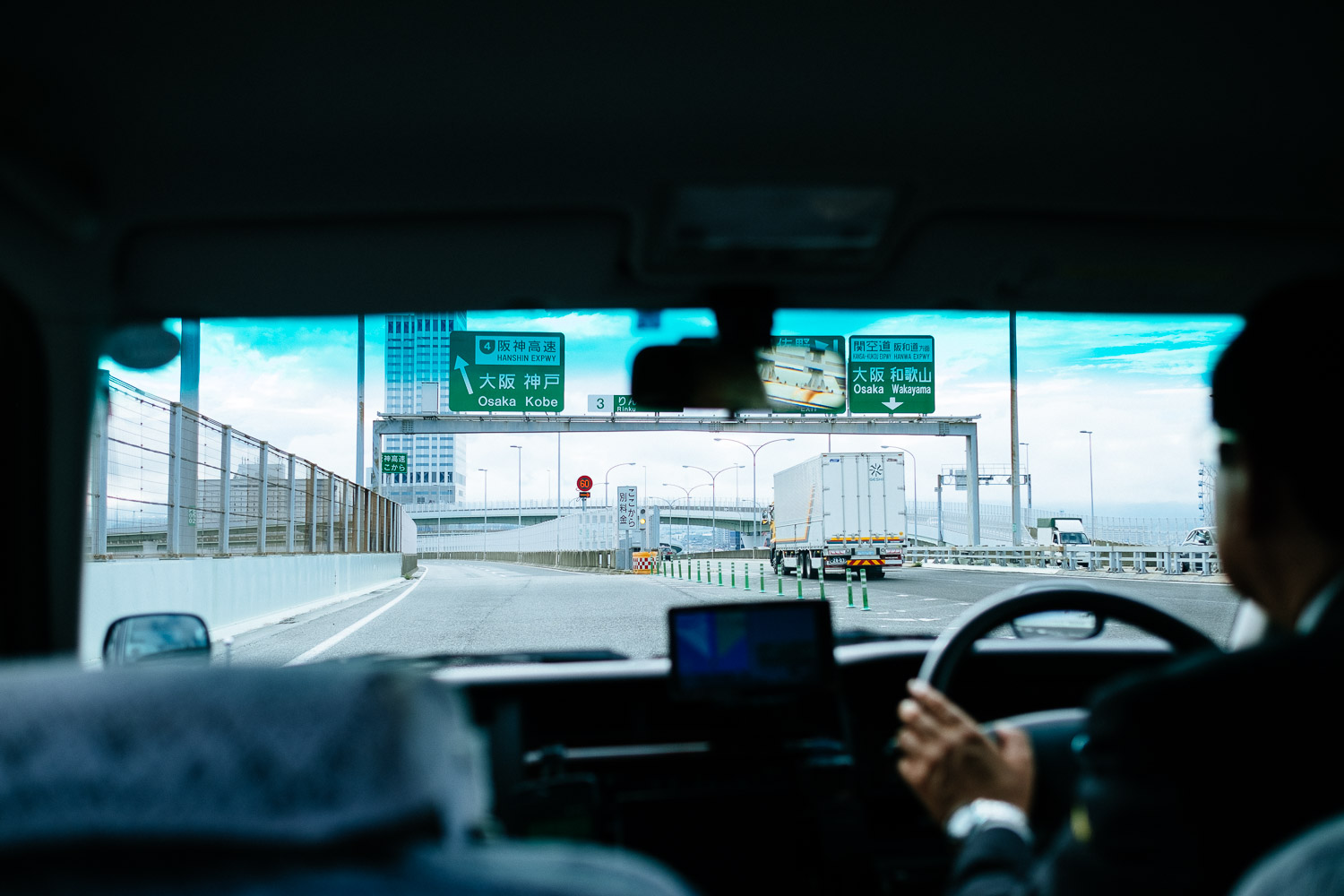 I really love to drive cars but there was a time when I was a passenger most of the time. This blog post deals with that time.

Before Covid-19 I used to travel a lot to Asia for business. I went to a lot of places I haven’t seen before so everything was exotic. Even though I was tired I used to shoot at least a couple of images on most rides.

The cars were very different. Of course the taxis and vans were mostly Toyotas and the hotel limousines mostly Mercedes but the cars where not my focus point literally. I was interested in what was behind the windscreen. 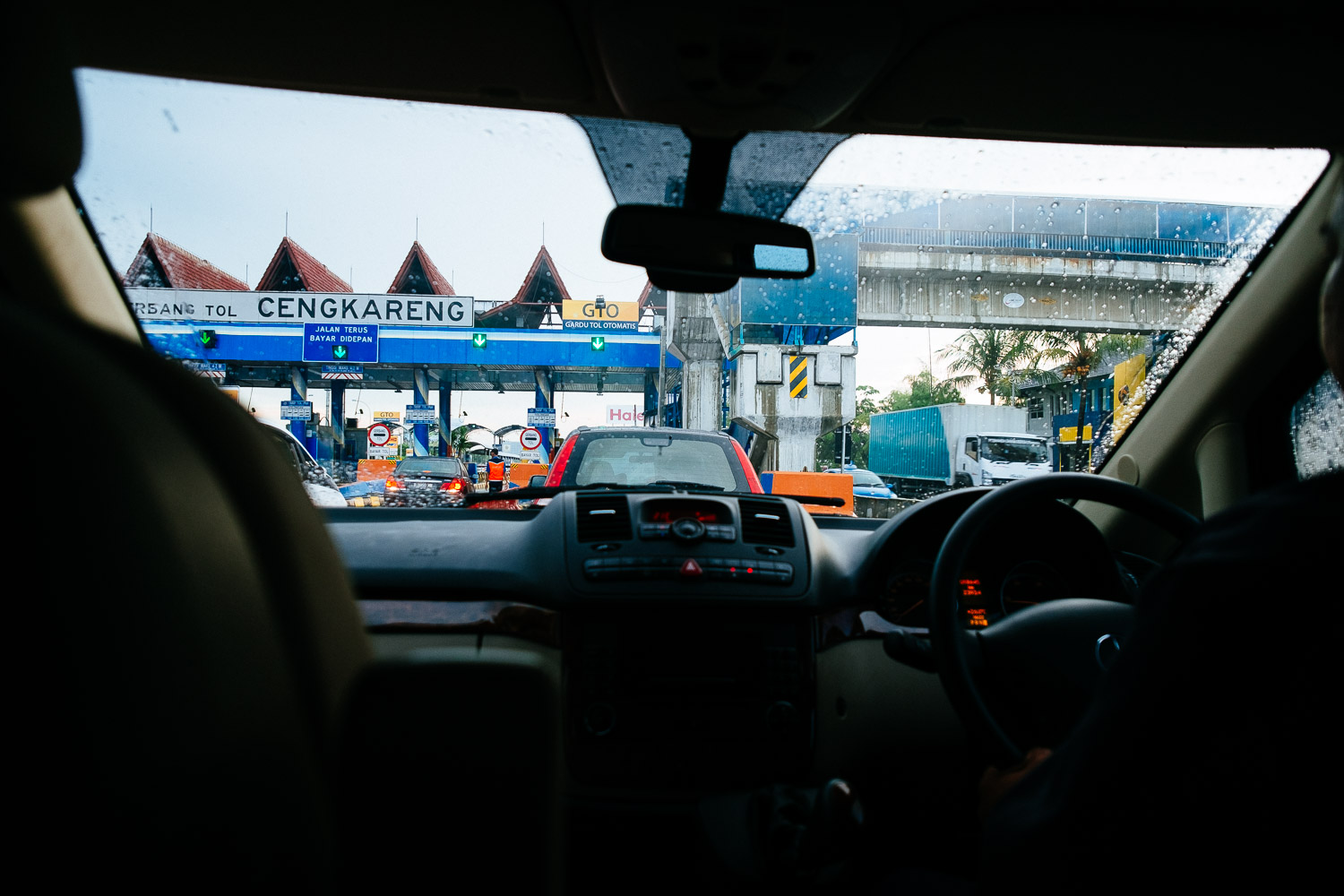 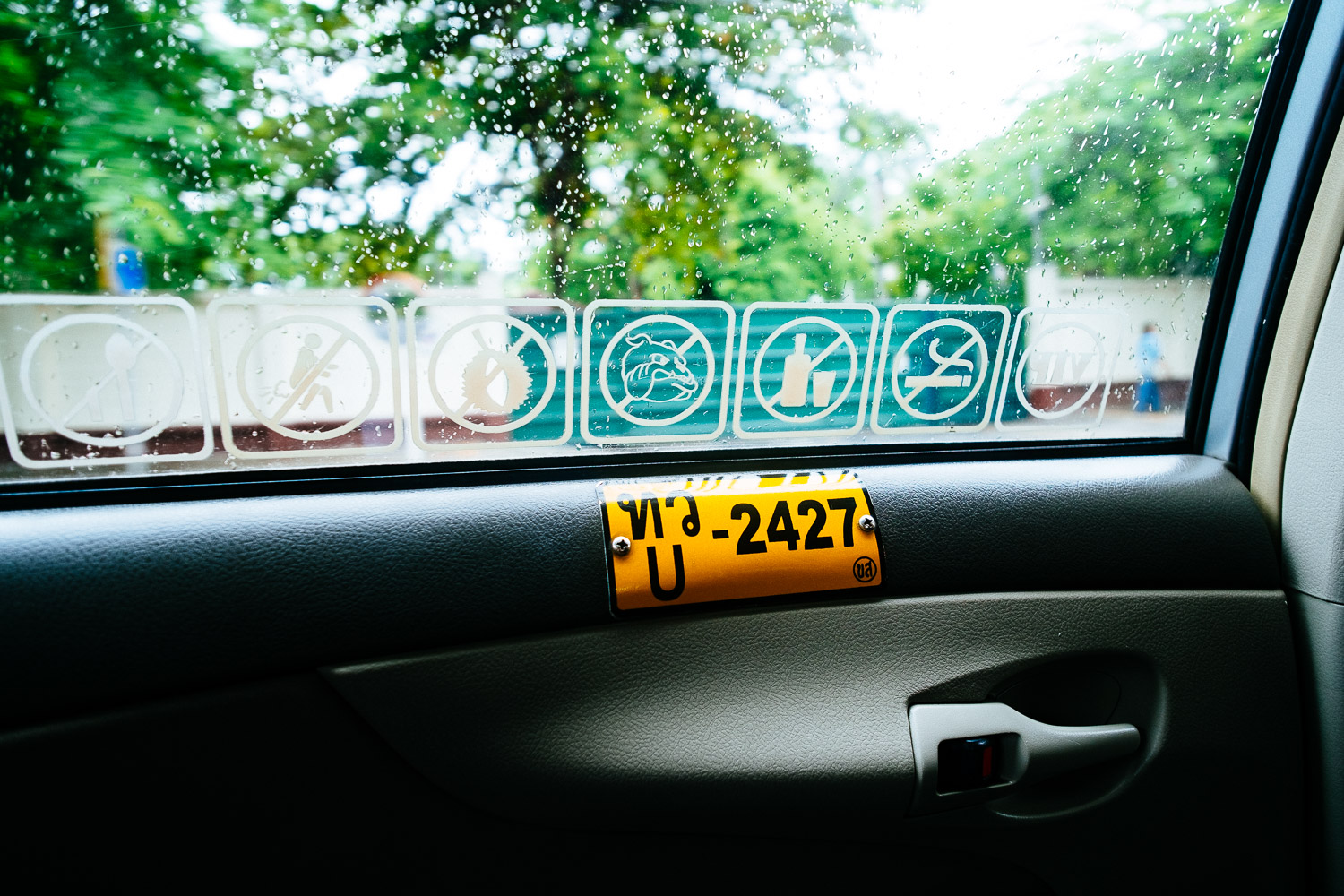 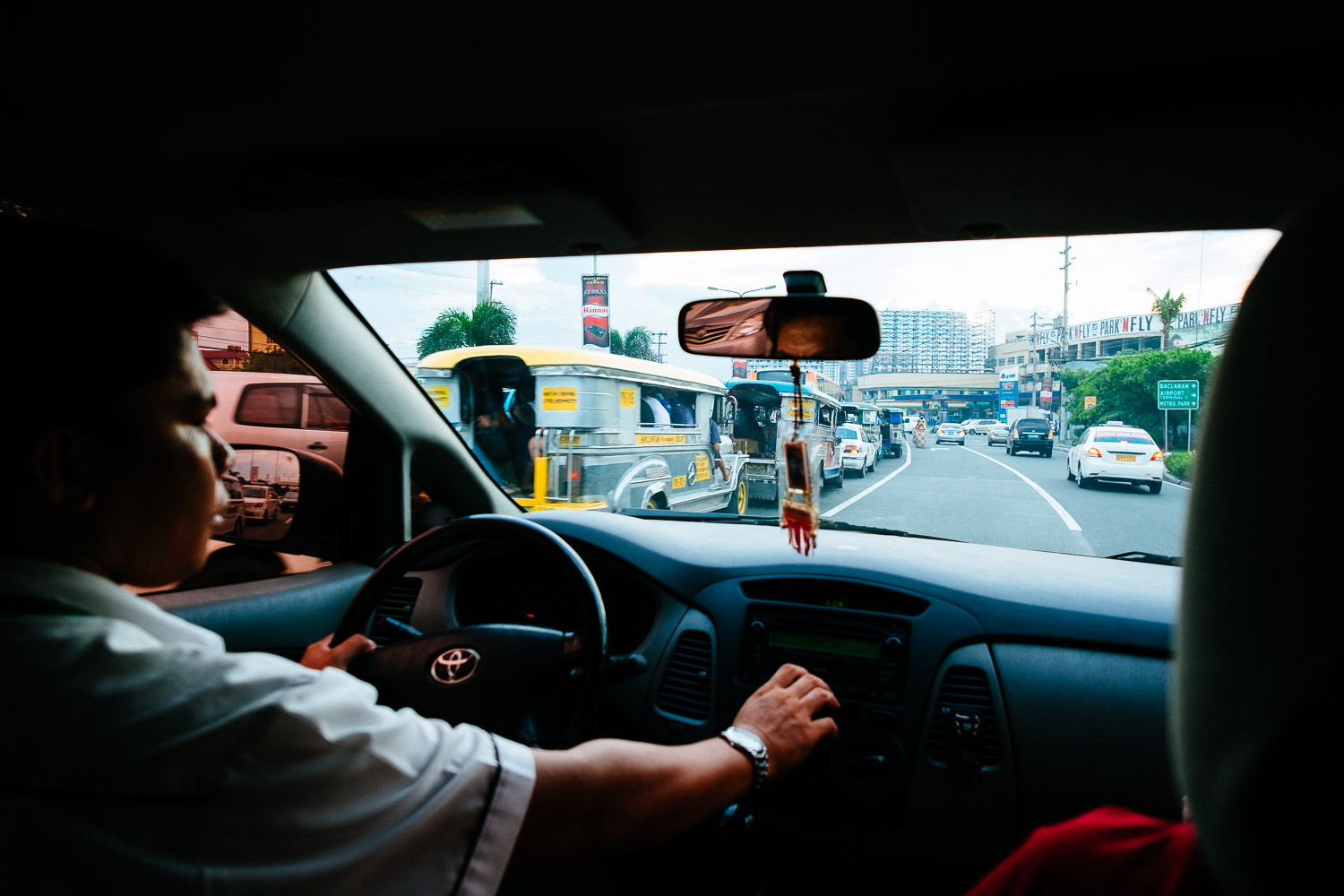 The first image on this blog post I took on my very first trip to Japan. I remember the very long trip from the airport in Osaka to my hotel. When I went to Japan the next time I arrived at Narita airport and took the train to Shinjuku, Tokyo. But on my very first trip I didn’t want to deal with trains and ticket machines so I took a taxi and since my driver didn’t speak a single word of English it was a very quiet ride.

The next image I took in Jakarta, Indonesia on the highway and the one below is from a taxis window in Bangkok, Thailand. Essentially everything is forbidden. Dogs, to drink alcohol or to eat durian, a fruit with a horrible smell. It was even forbidden to fart which I found strange since this is something you usually can’t fully control. 😉

The last image above I took in Manila, Philippines. You can tell because the steering wheel is on the left side and the Jeepneys show that we are on the Philippines.

The picture below is from a long ride from Malacca to Kuala Lumpur, Malaysia. My colleague rented a driver for me to get me back to the airport. I guess it was her grand uncle or another close relative. He drove a very old Mercedes of which he was very proud and kept it in pristine condition. We had a very nice chat, not only about the car , but also about life. 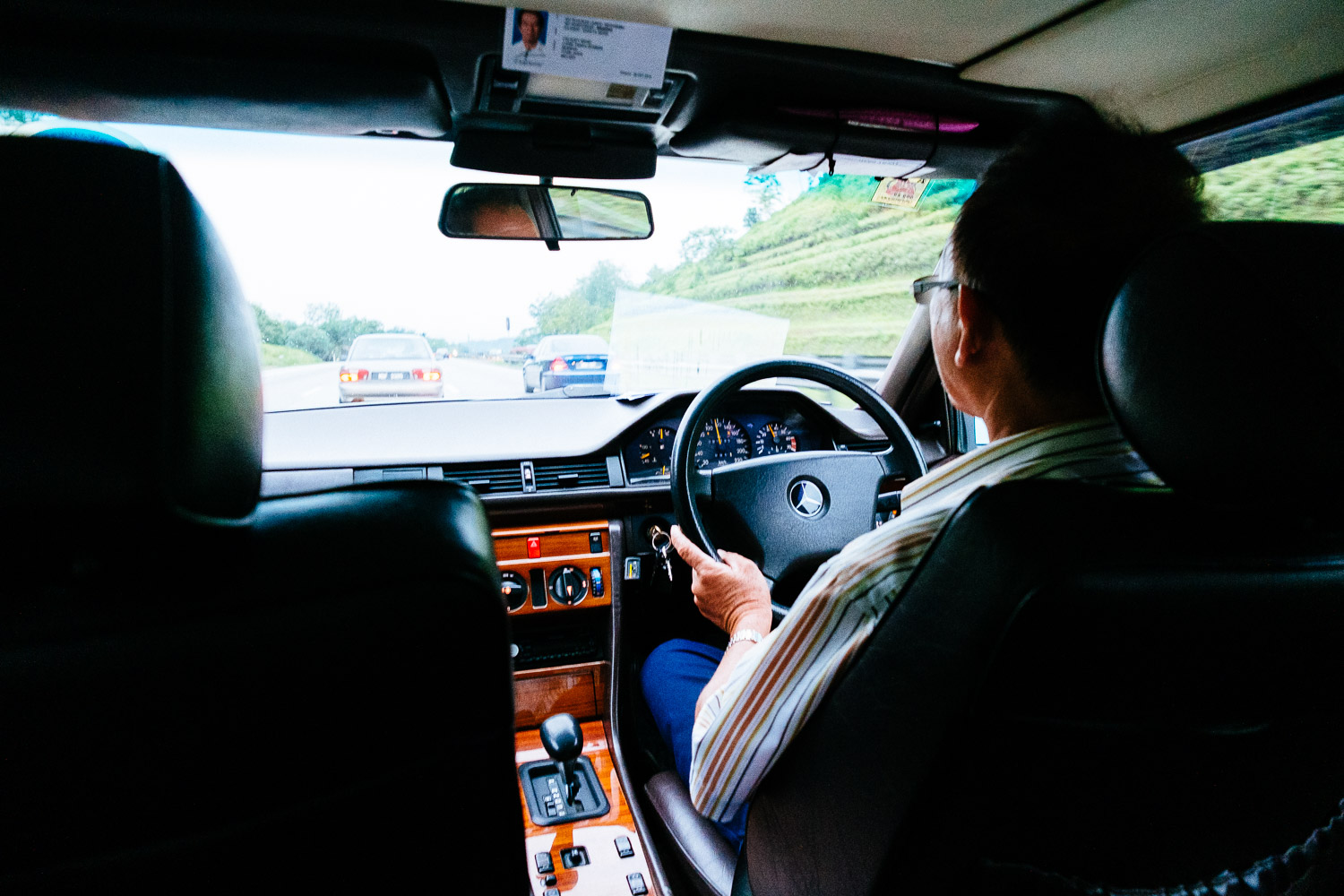 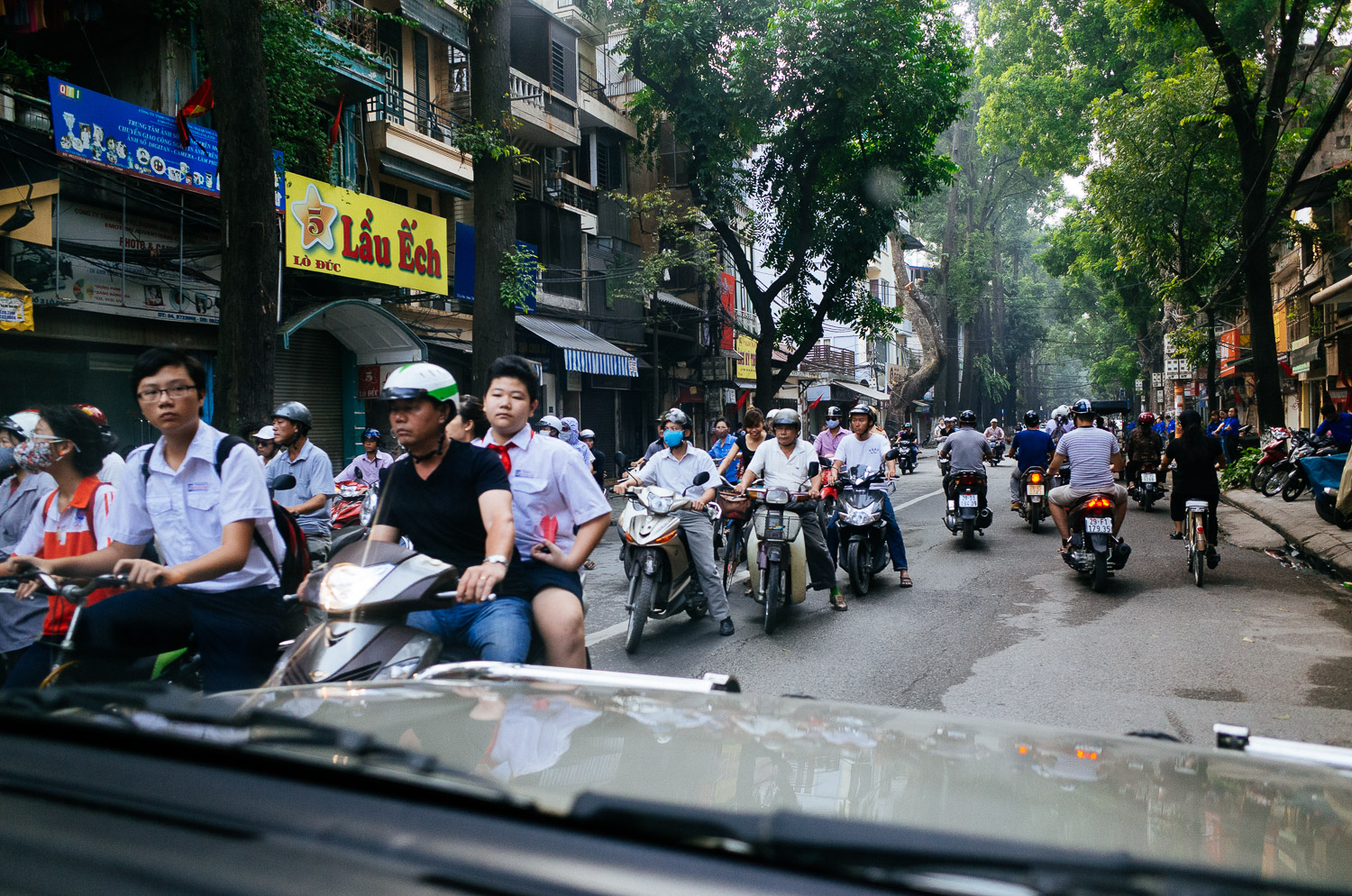 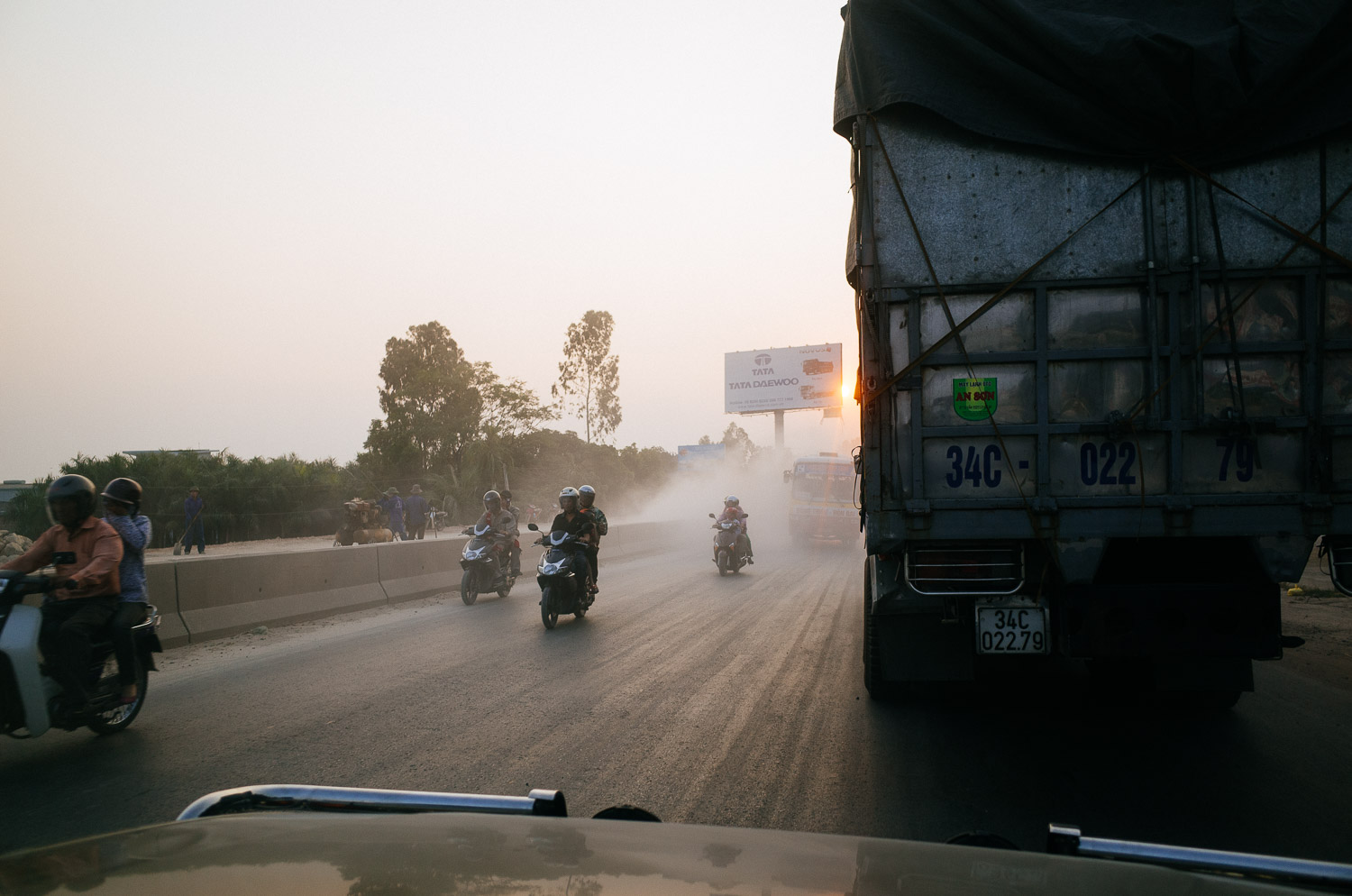 The two images above are from Vietnam. The first taken in Hanoi and the second taken on the way back to Hanoi. We were driving in a Mitsubishi Pajero. The owner of the company I was visiting offered this car plus driver so that I could visit the amazing Ha Long Bay on Saturday.

Originally I planned to simply stay in the city to visit some places but at that time I was there the famous general Nguyen Giap died at the age of 102. He was put on display so that the people of Vietnam could see hime before he get buried. So tens of thousands came to Hanoi to pay their respect. The city was in a state of emergency. There was police and military everywhere and traffic was even more crazy than usual. That’s why my business partner suggested to leave the city and visit Ha Long Bay. And I’m so glad that I did. It was amazing.

Below image was taken the next day on the way to the airport. There was still police and military everywhere and there were so many people on the airport that I couldn’t even see my own cabin trolley behind me. I just love Vietnam! 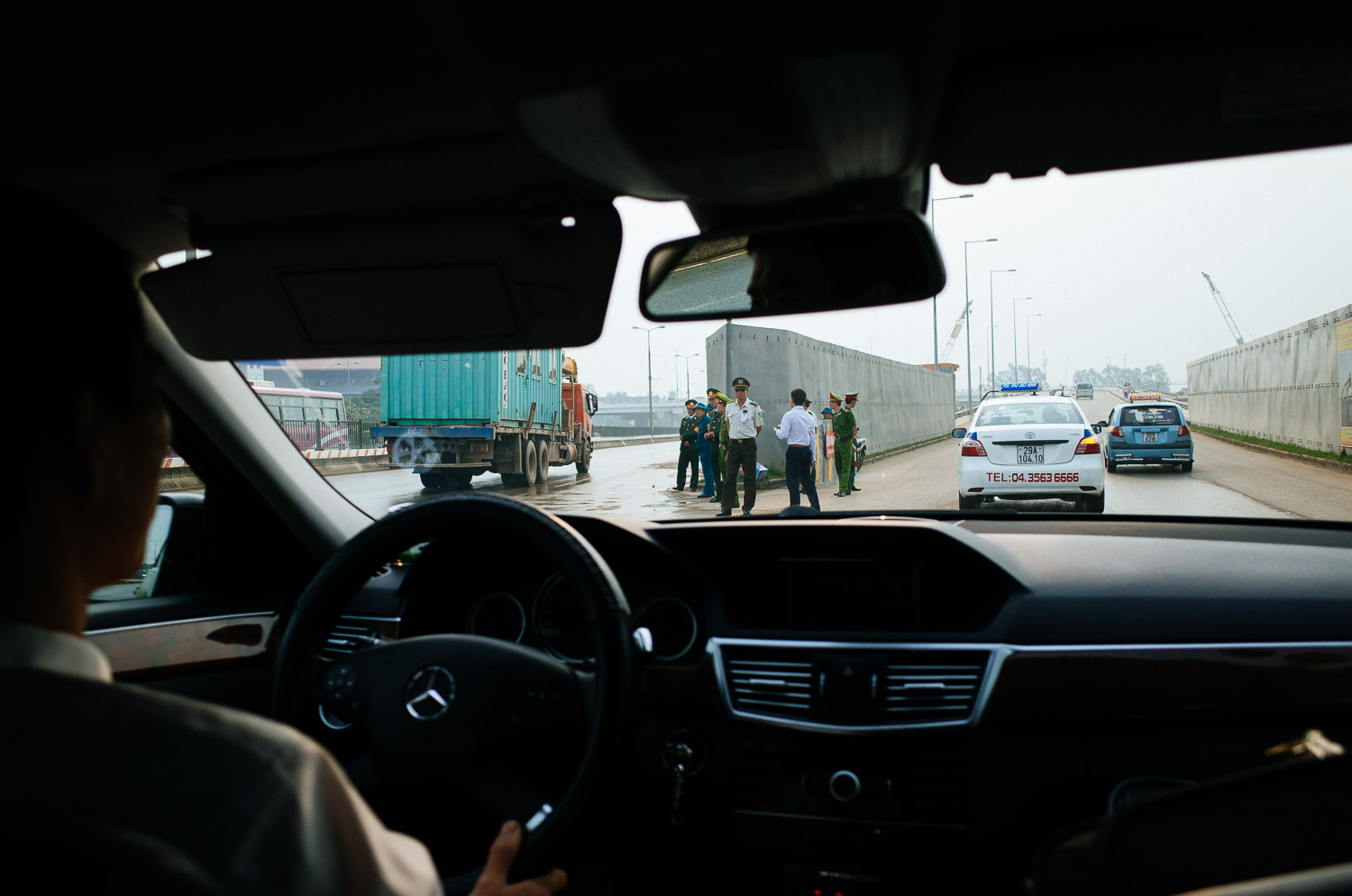 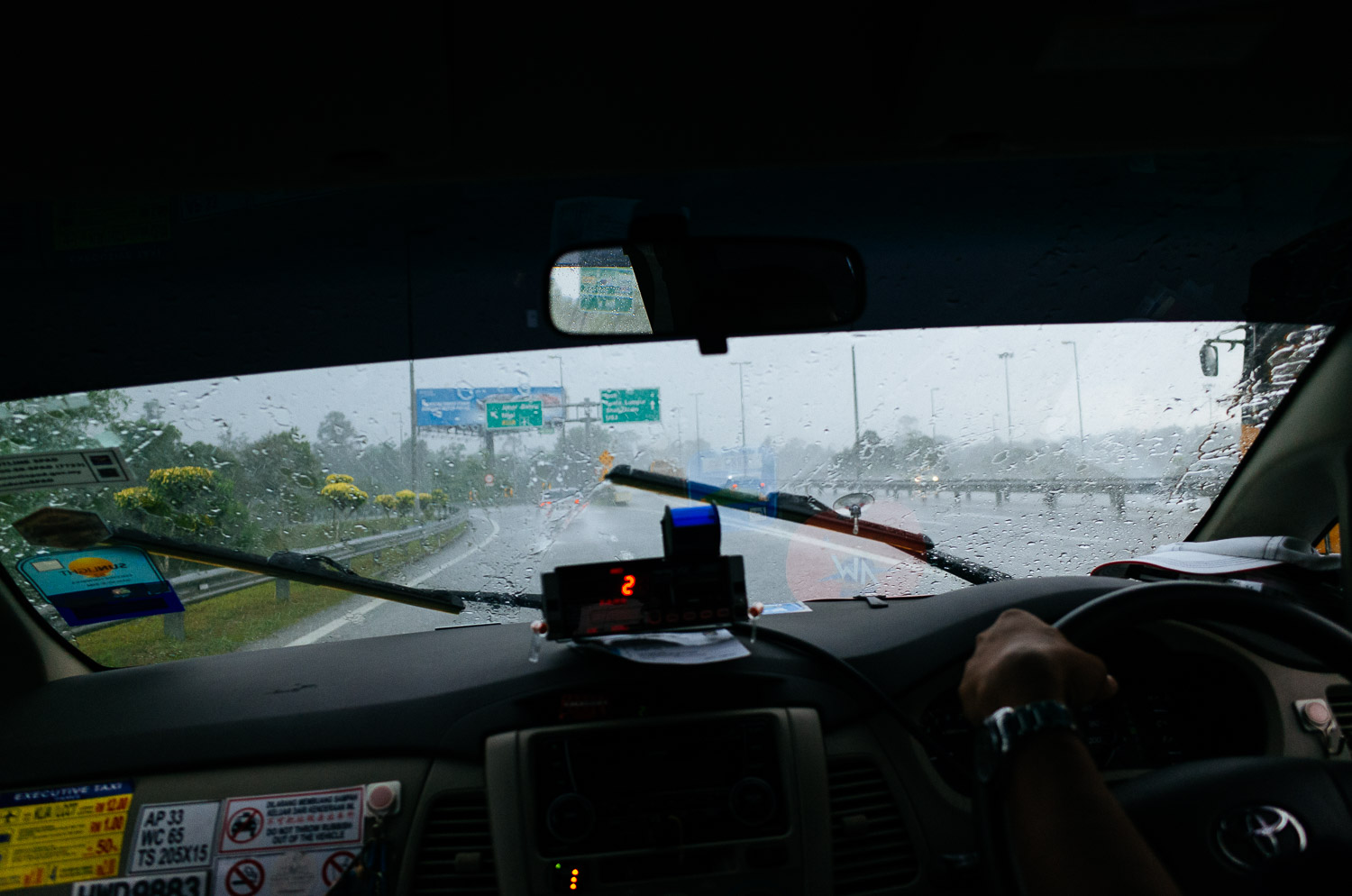 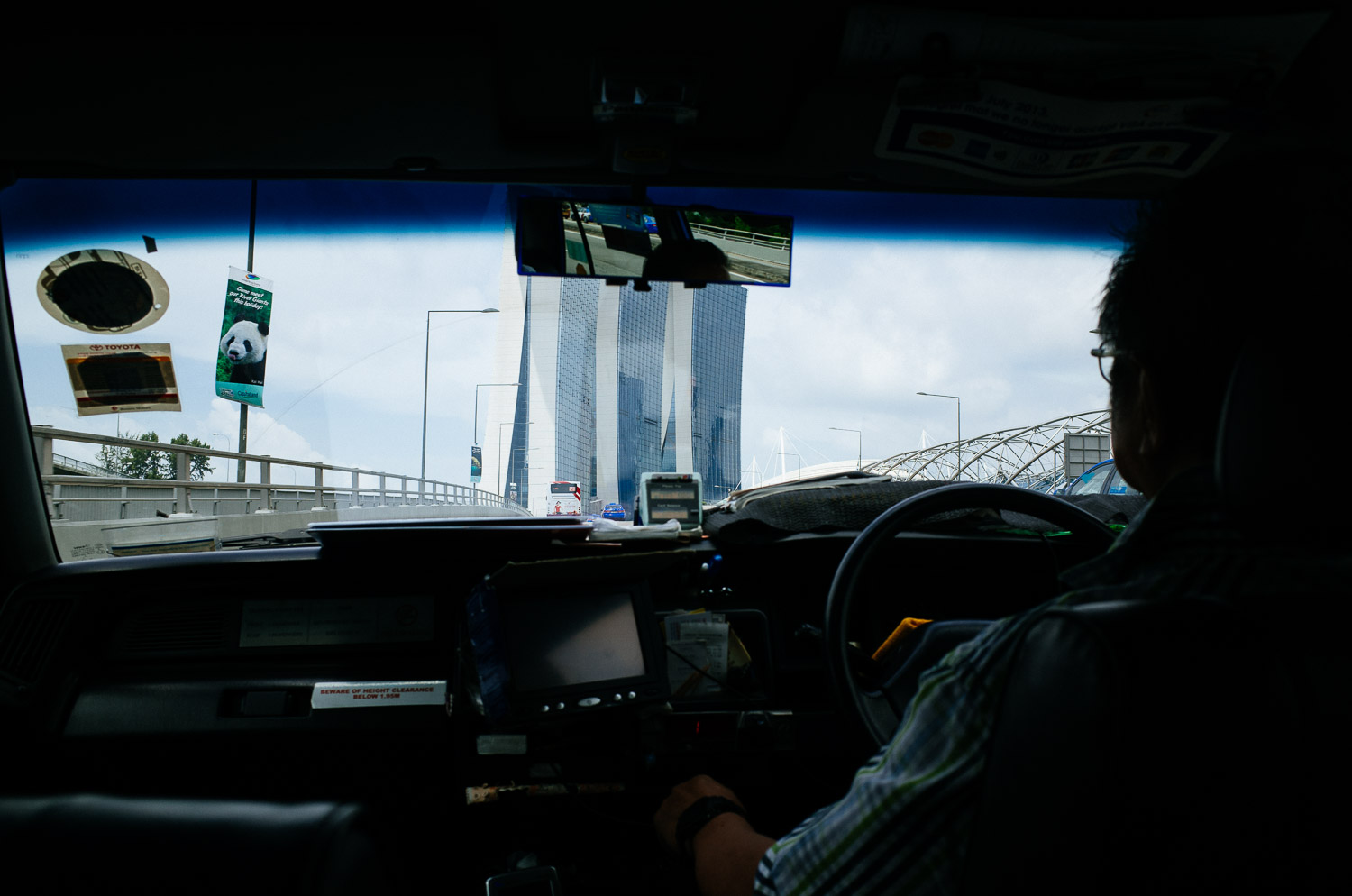 The next image I took on the way to the airport in Jakarta during a monsoon shower. At a point it rained so hard that the traffic almost came to a stand still on the highway. I think I never saw such heavy rain before in my life.

Below is an image I took on my very first trip to Singapore. I flew in from Malaysia in the morning and flew back to Kuala Lumpur in the evening. I had a business meeting and for that I chose a restaurant on the top of the Marina Bay hotel. The iconic hotel with the infinity pool that connects its towers. The view from the platform is just breathtaking. Whenever I was in Singapore I came back just to that platform to have this view again.

The image below is from Bangkok, Thailand. When I went to Bangkok I stayed in the Grand Hyatt Erewan. This was one of my favourite hotels because of service, its location but also because they used a Mercedes S-class for the transfer from and to the airport. After an 8 hour flight the massage seats and the air suspension makes a lot of sense. In such a car you could almost think that the roads in Bangkok are as flat as a mirror but a short ride in a normal taxi told my back that they are not. They are as bumpy as it gets. 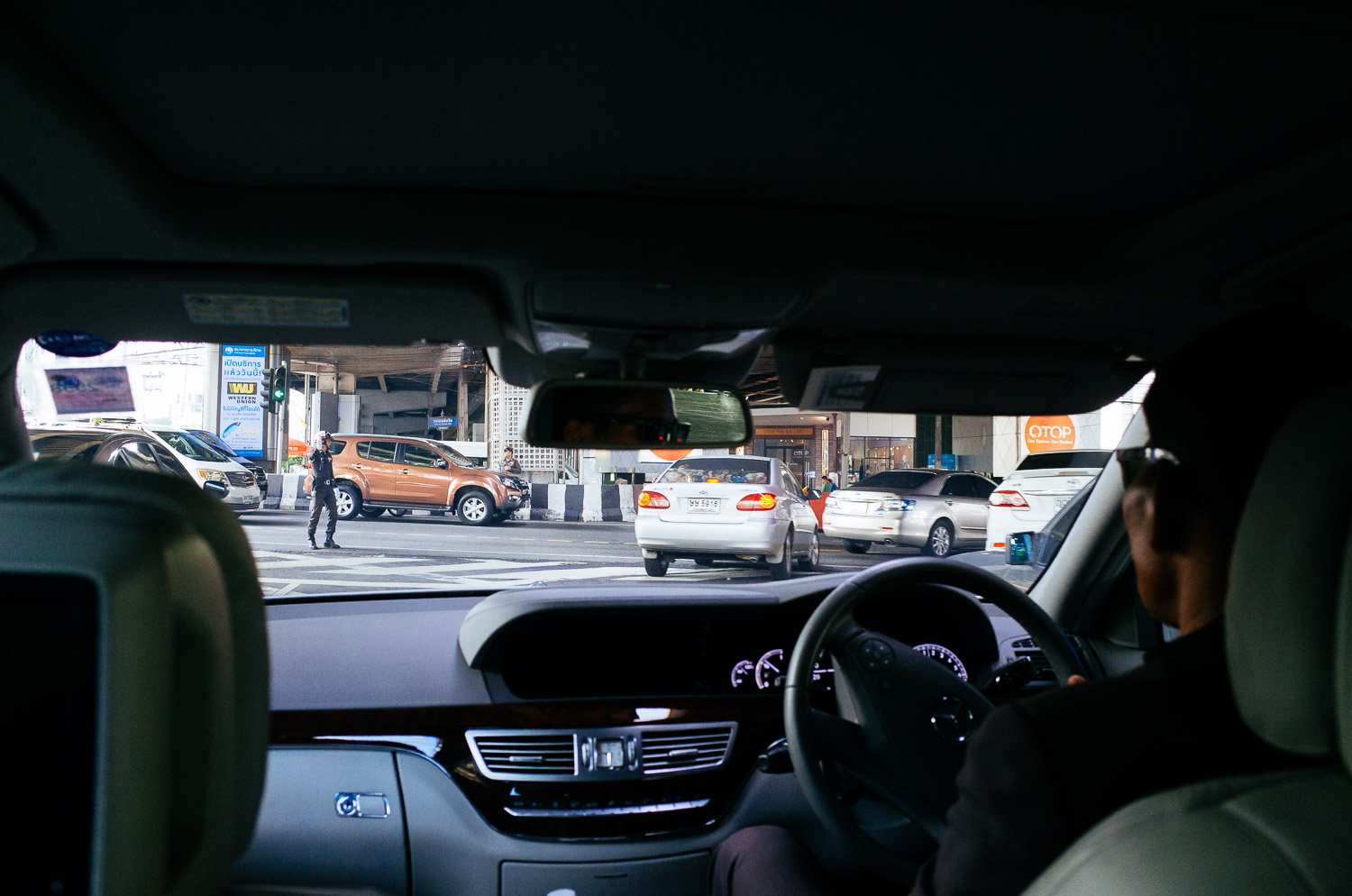 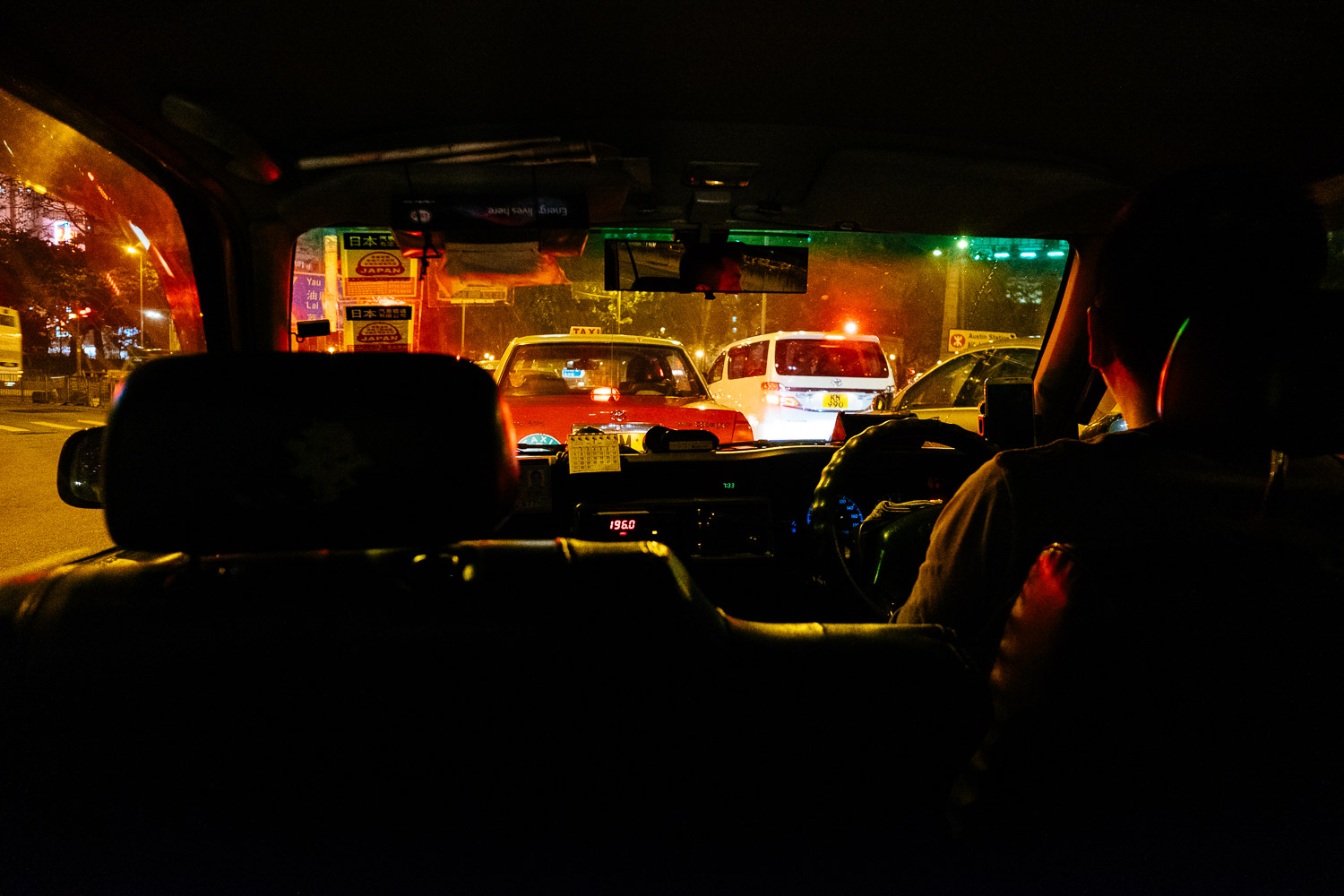 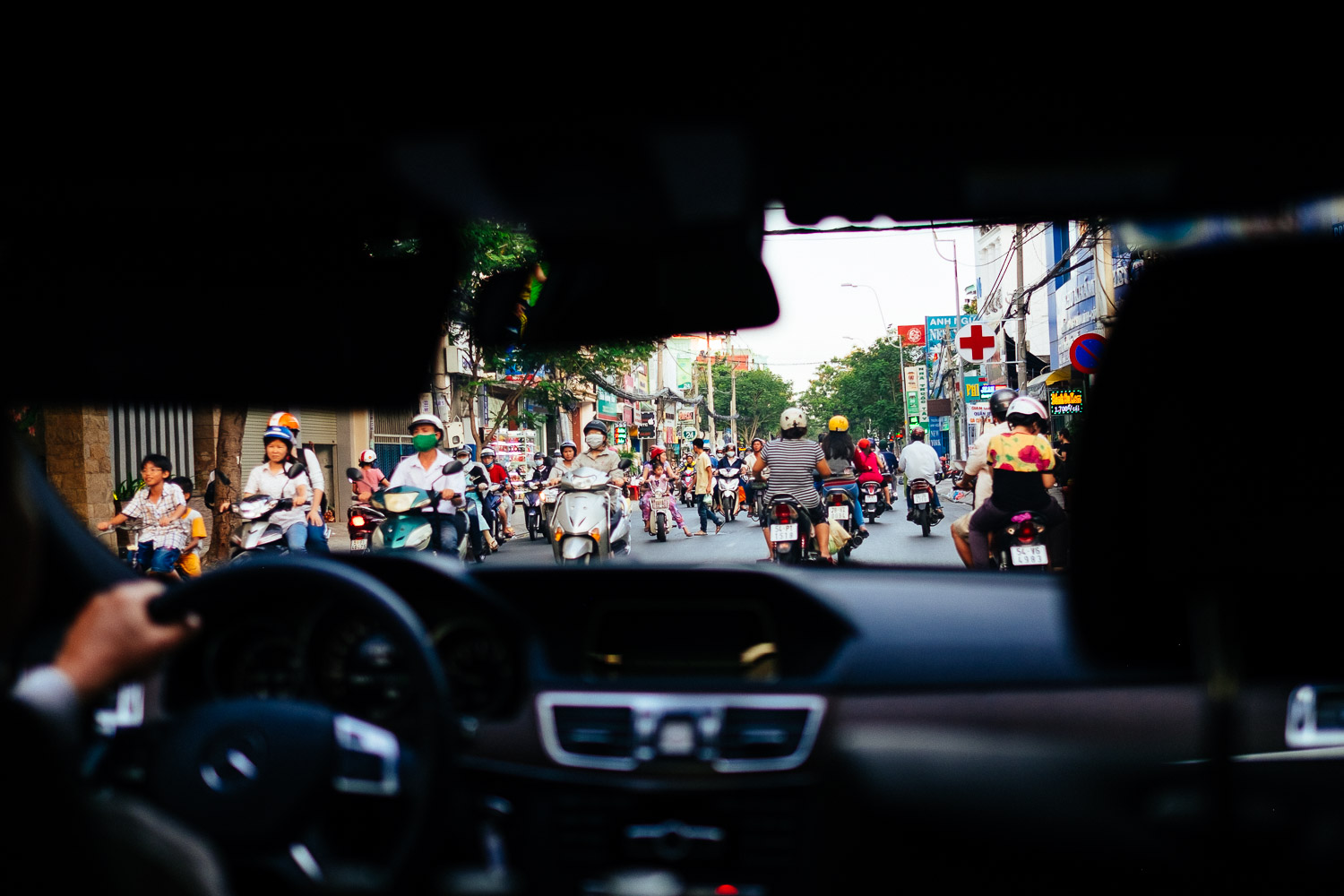 The next image shows my night ride on my first trip to Hong Kong. I remember that one very well. There was no airport transfer booked for me, I had no local money and I had no idea which taxi to take. In Hong Kong the taxis have three colours depending on the area they are traveling. For me it was the red one.

As the drivers don’t speak English there are instructors at the taxi stand. I told the young lady my hotel and she explained to the driver but he asked back a couple of times and I was not convinced that he really knew the place. But I was tired as I just arrived after a 12 course flight so I hoped inside. The ride was endless and it didn’t help that I couldn’t ask how long it would take to get to my hotel. I also found a sign that said that my taxi doesn’t except credit cards. Brilliant! I had no cash but even if I could talk to my driver I would have kept this information to myself.

When we finally arrived at the hotel I ask the guy from the hotel that opened my door to tell the driver to wait and that I would be back in a minute with the money. I ran into the hotel, explained the situation, showed my credit card and finally came back to pay my driver. Welcome to Hong Kong!

Next is from a hotel transfer ride to my hotel in Ho Chi Minh City, Vietnam. It’s one of my favourite taxi shots because it shows what HCMC is famous for, the scooters, and it also clearly shows in which car I’m in even though it’s nicely blurred. A Mercedes C-class.

In the image below I’m in an S-class again on my way to the airport in Bangkok. I never drove a Mercedes S-Class, a BMW 7 series or an Audi A8 myself but I’ve been transported in them many, many times. From that experience I can say that nothing matches the S-class when it comes to ride comfort. Not even the long versions from Ausi and BMW were as good as the Mercedes. The ride was always firmer, stiffer whereas the Mercedes was almost floating like a flying carpet. 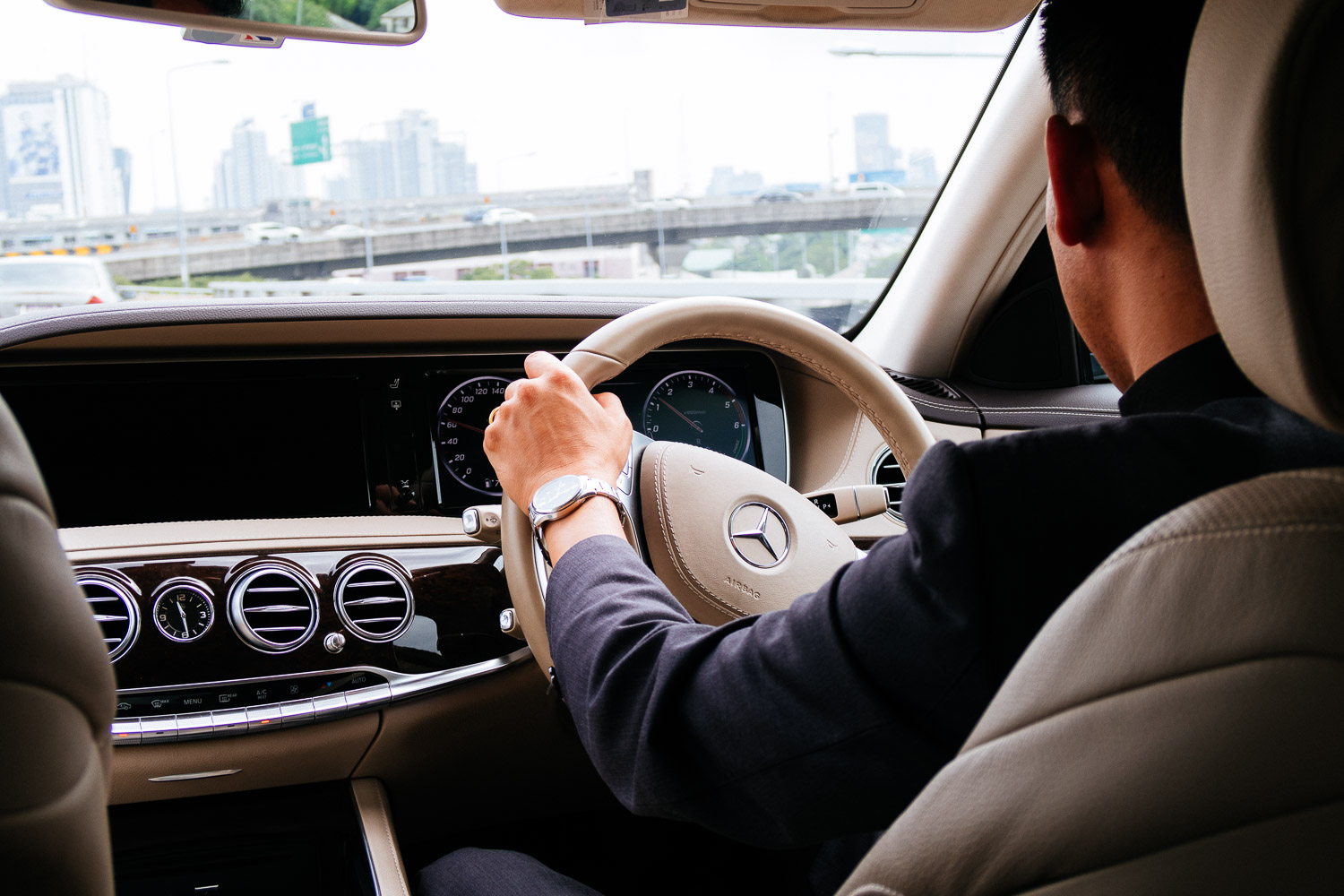 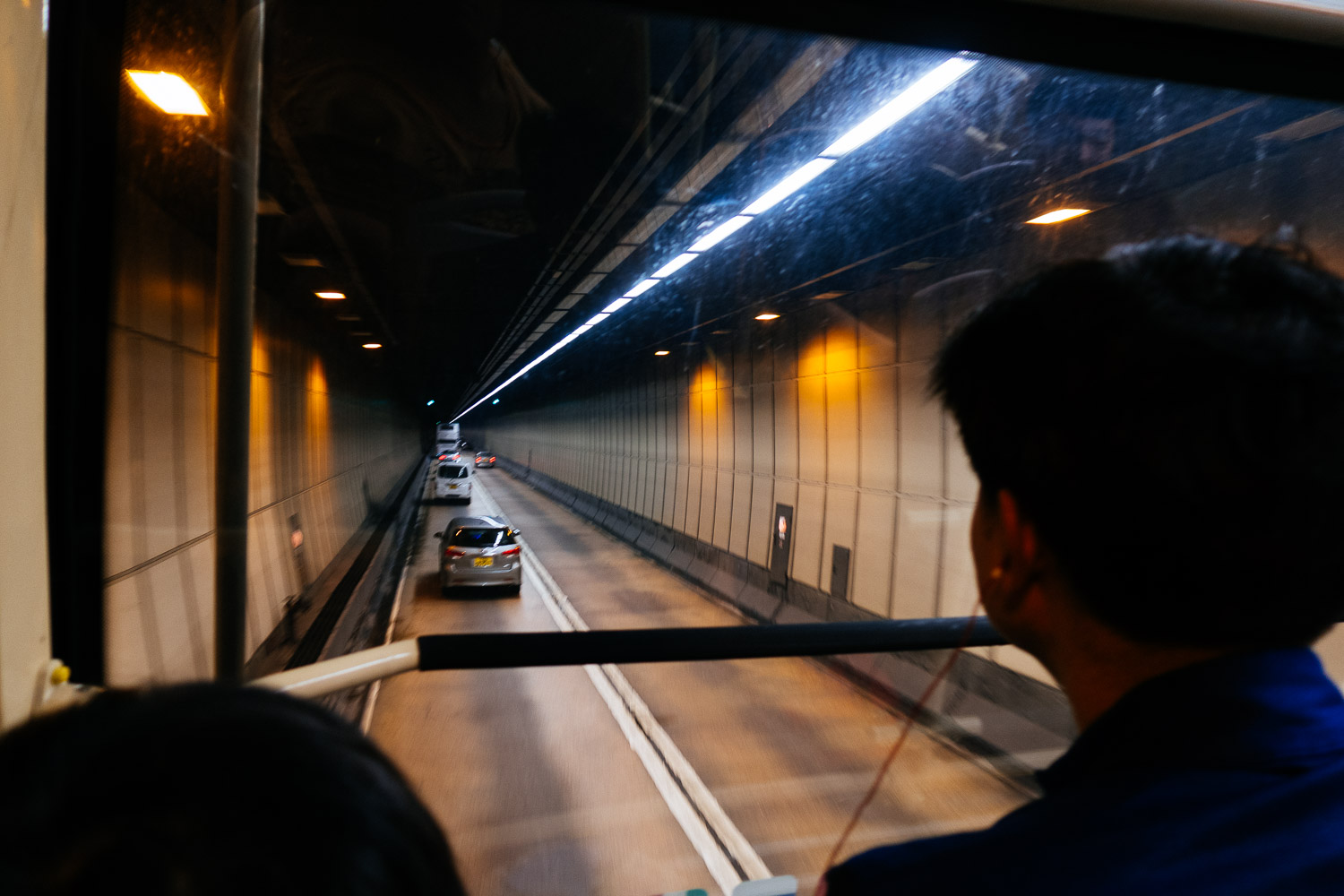 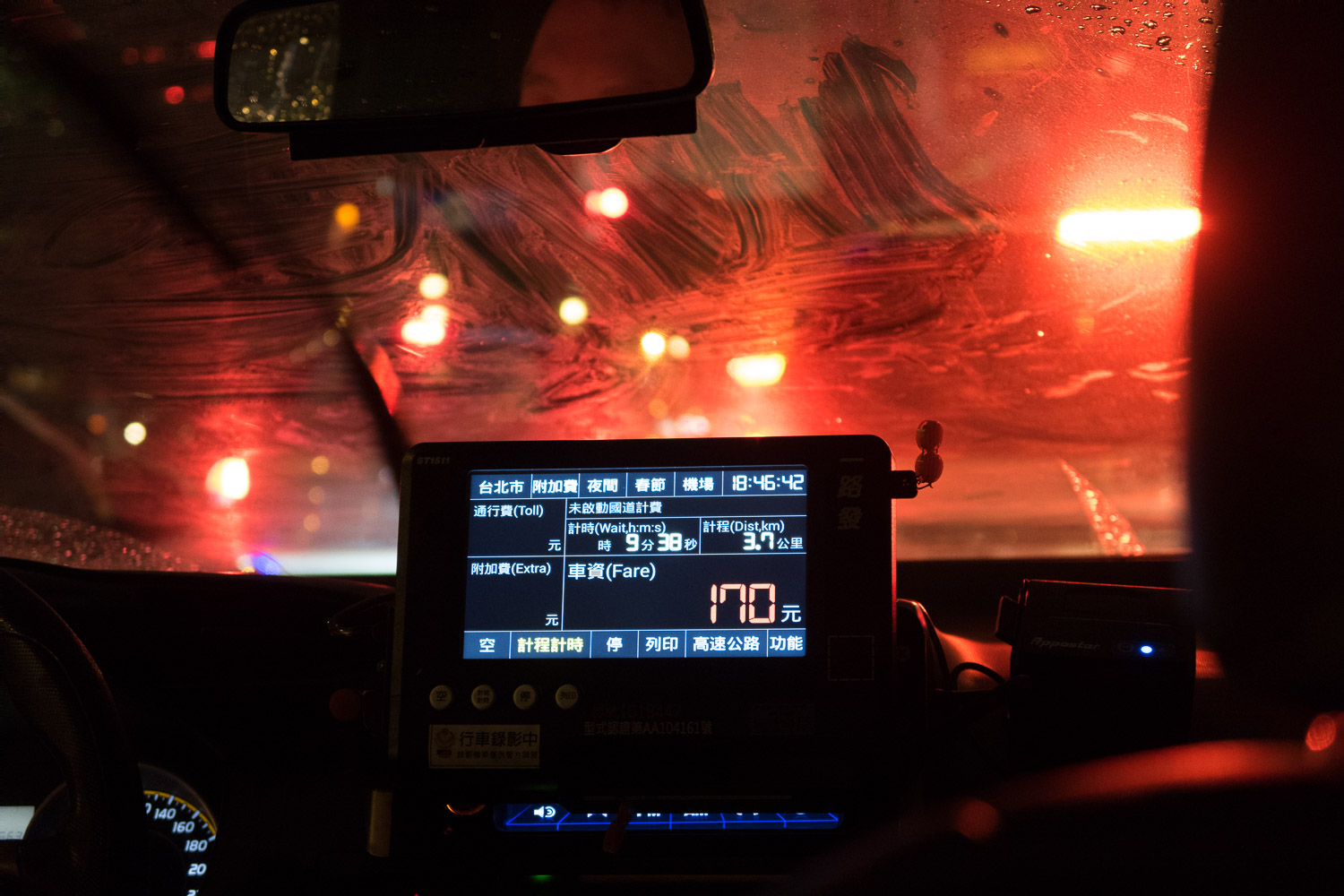 Next picture was taken in Hong Kong again. The only time I ever rode on a bus. A tourist double decker on a round trip around Hong Kong Island. It wasn’t worth the money. There is so much more to see in Hong Kong but when you visiting a place repeatedly you wan to try something new. Sometimes you find something interesting and sometimes you don’t.

The last image above was taken in Taipei, Taiwan. On one of my strangest taxi rides through a cold and rainy night. As you can see the windscreen was almost completely fogged up. The taxi driver was a quiet man. The only time he produced a noise was when we stopped at the traffic light. He rolled down the window and blew his nose in a way that is familiar to every bicycle rider and it goes like that. Close one nose hole with your thumb and blow out what is in there on the other nose hole with force. But what is perfectly acceptable on a road bike is absolutely not in any other situation in life.

But to my drivers defence it was necessary. I could easily hear the massive amount of snot  when it hit the road. After that he rolled up the window, the lights changed and we drove on. 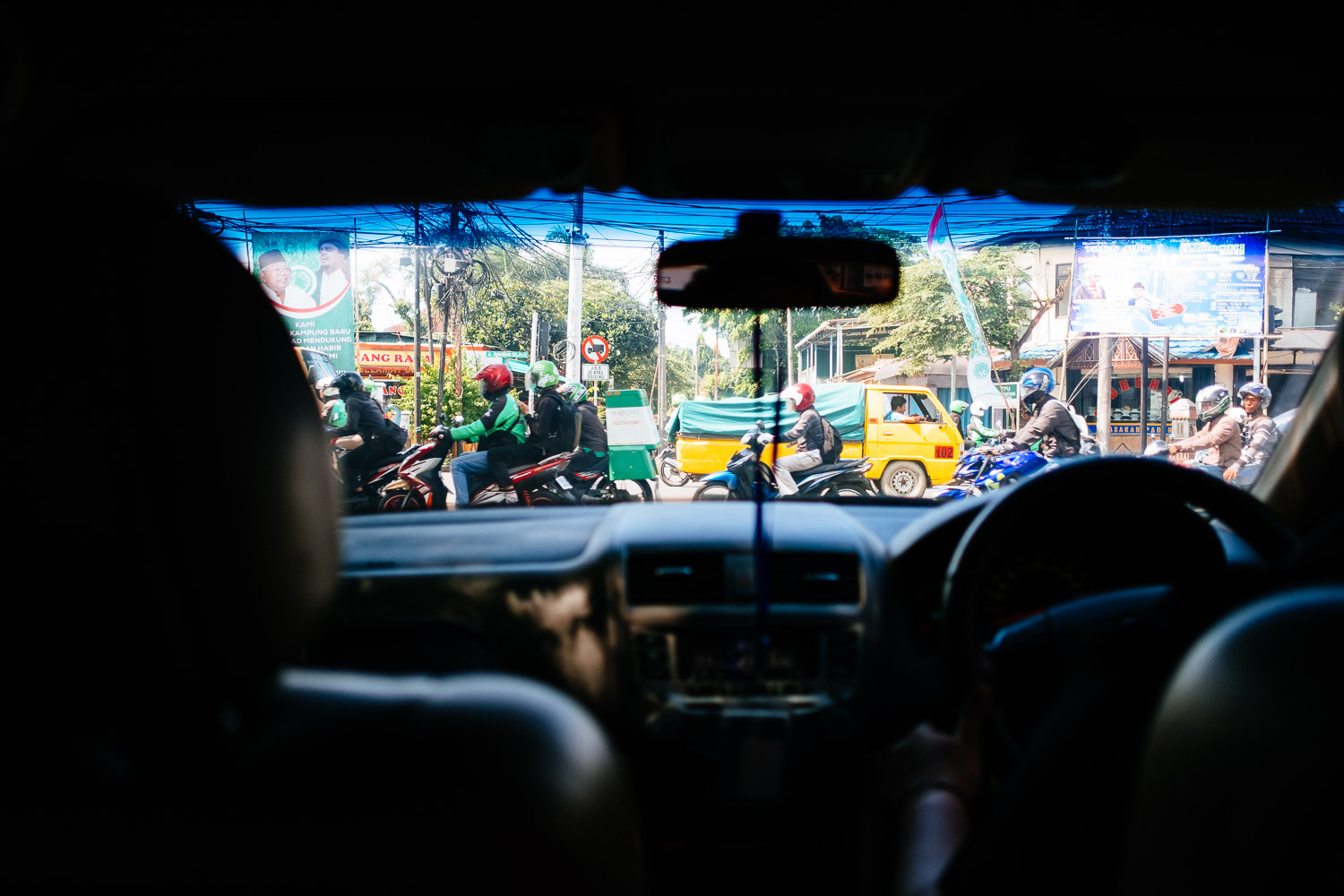 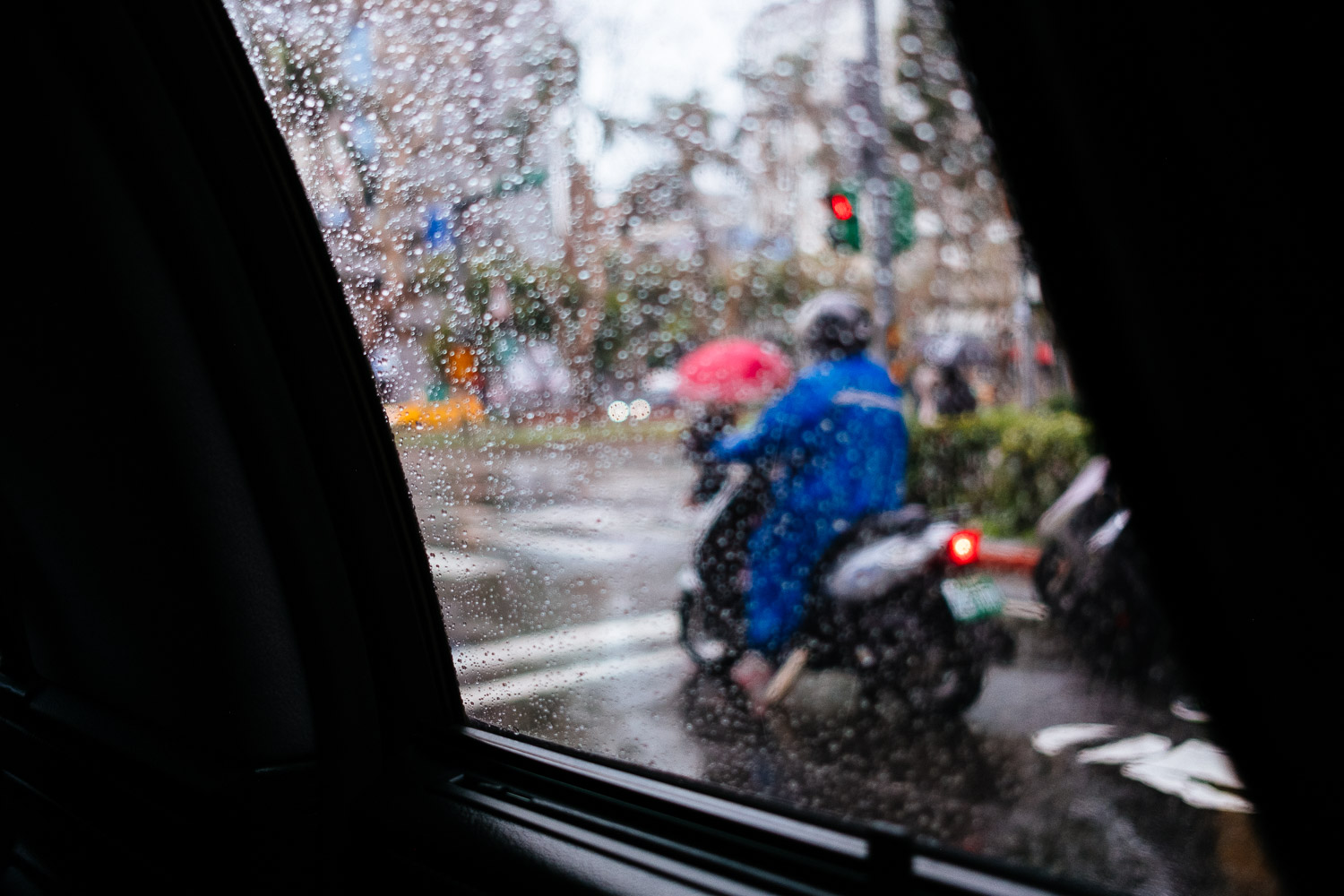 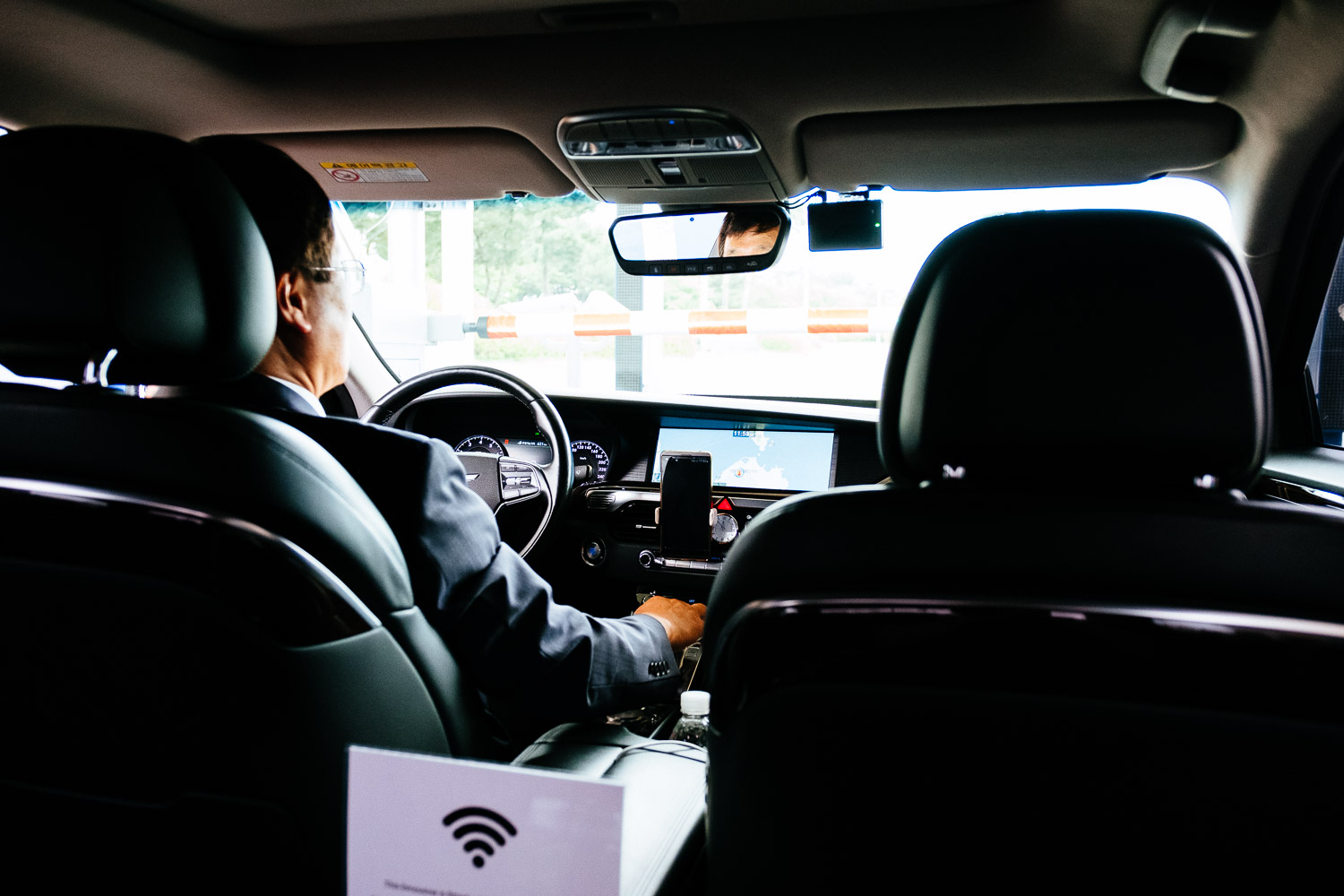 Jakarta, Indonesia one more time. On the ride from hotel to the office of my distributor we passed a rather strange looking area. Unfortunately I have no picture of that but I remember staring out of the window because I couldn’t believe that we were passing goats roaming around on the narrow, unpaved road in the middle of Jakarta. I think the ride was a short cut from my hotel to the industrial area where my customer was located. Jakarta is the second biggest metropolis in the world after Tokyo. 35 million people live here but it’s not like one big city, it is more like thousands of small towns and villages put together into one giant settlement.

Taipei one more time, this time from a back of a hotel limousine on the way to the airport. A Toyota Century with big, black curtains that you could close to hide yourself from the outside world. This car was floating like the Cadillacs or Lincolns of the 70s. Out of this world!

The last two images are from a trip to South Korea. It’s the ride from the airport to my hotel in Seoul in a big limousine from Genesis.

Of course I talked about the cars as well. At the end I’m a car person too. I drive an SUV but I must admit that the ride comfort in those limousines is much better. Especially the Mercedes S-class, the Toyota Century but also all the Toyota Crown Comforts in Japan, Hong Kong and Singapore offer a very comfortable ride.

Wait! Isn’t one country missing here? What about India? Why no images from my many trips in India? In no other country I spent so much time inside cars. No other country that I visited regularly is so exotic. As a consequence the rides in India deserve their own blog post. 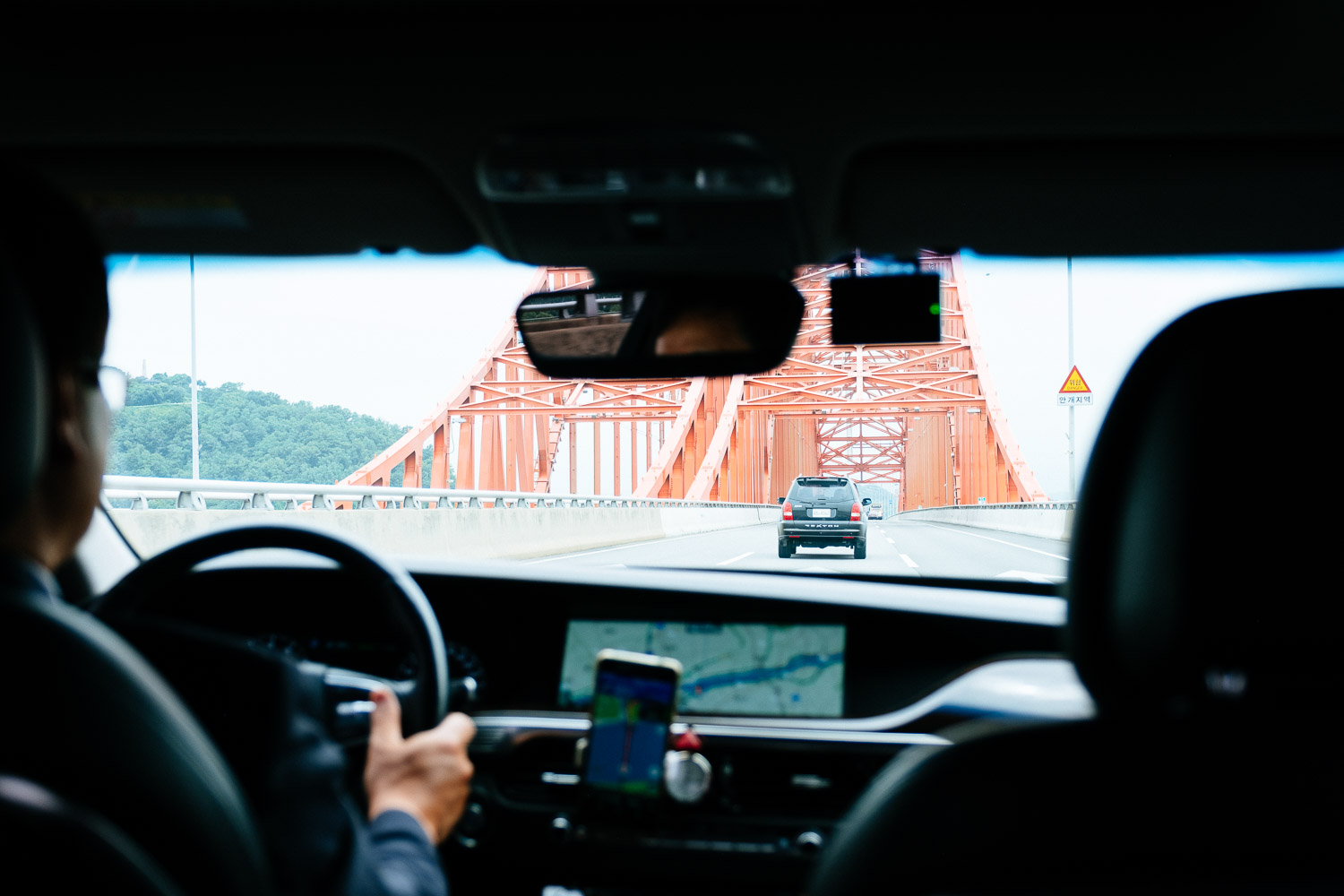