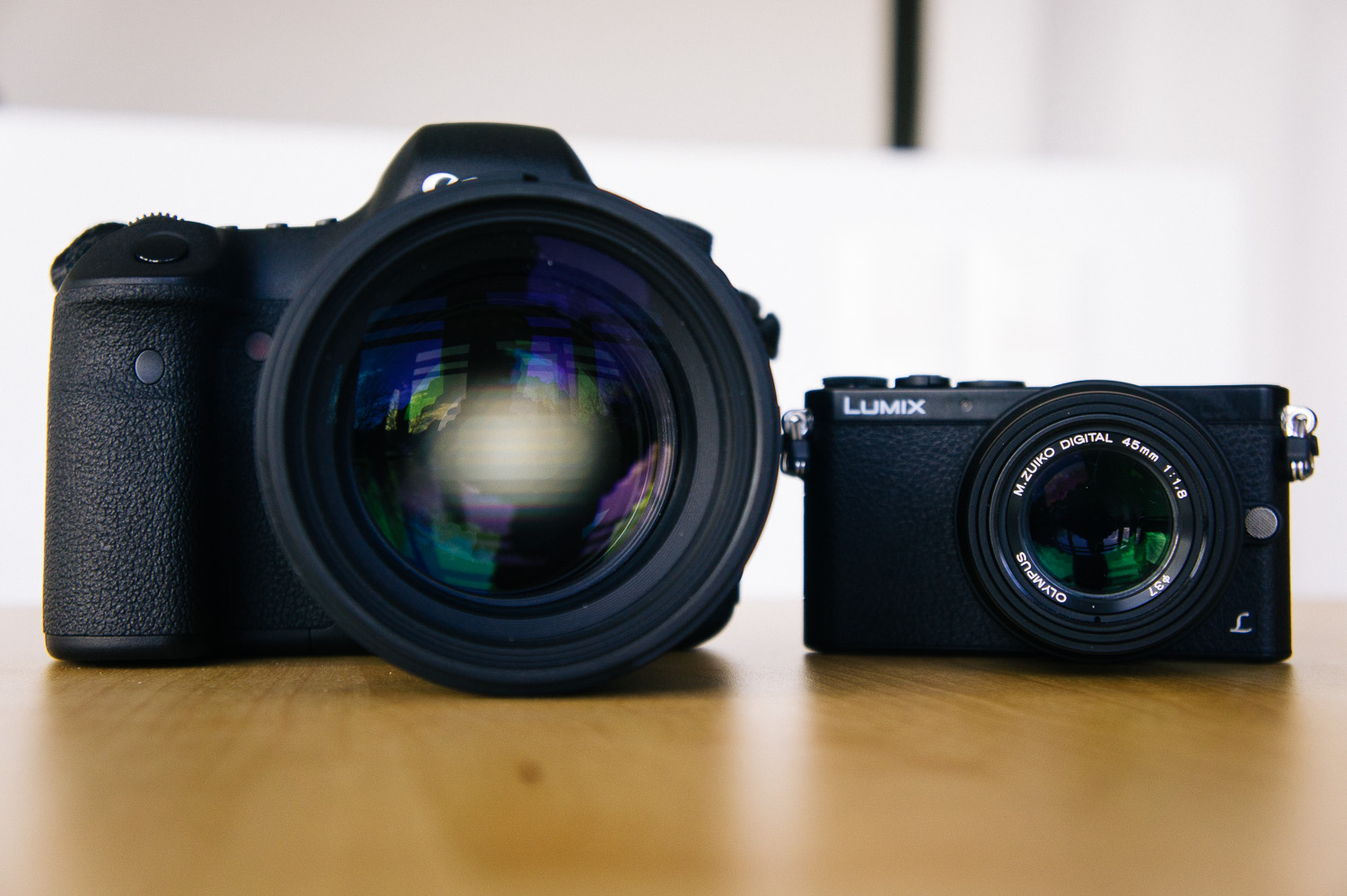 In late summer 2010 digital photography has changed forever. At least for me. 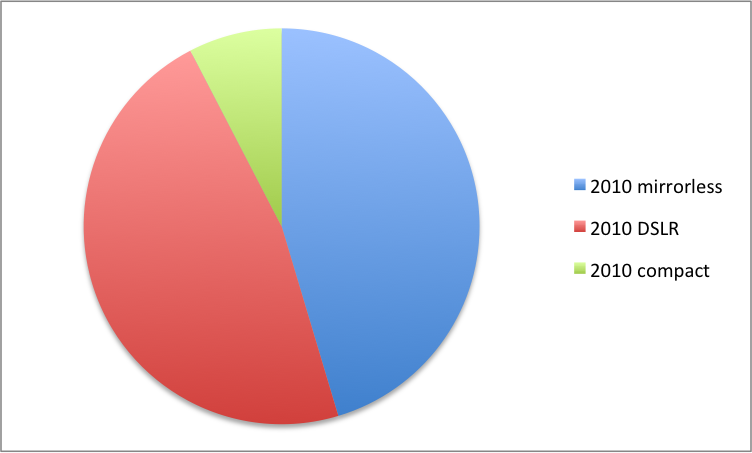 I got my first mirrorless camera: a Sony NEX-5. What a brilliant little camera! For the first time after I converted to digital photography in January 2002 I had a small camera that gave me the image quality I got from my DSLR. Thank you Sony! They were the first company who put a really large sensor in a super compact camera. I got it just before a three week vacation in the South West of the USA. Despite I took 2 DSLRs and a backpack full of lenses the NEX became my most used camera of the trip.

Maybe it is not clearly visibly in the image above but DSLR won by a couple of images in 2010 but again: I bought the NEX end of August!

There are some pictures I took with my compact cameras but that stopped after I got the NEX. 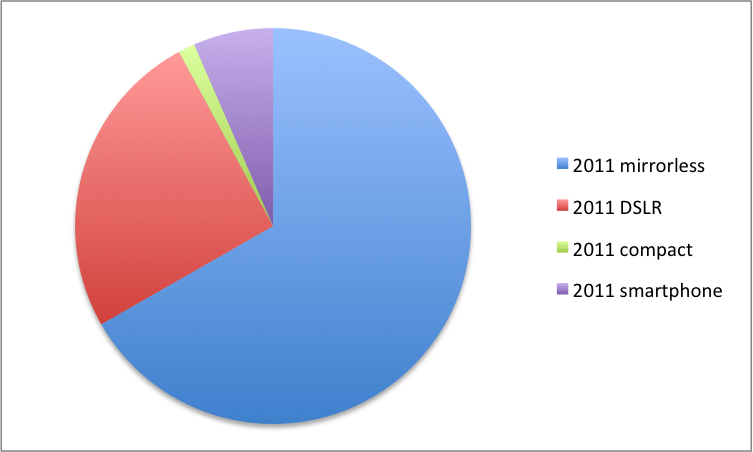 In 2011 the picture is much clearer. I spent a great three week vacation in British Columbia but used my two mirrorless cameras more often. Instead of getting the overpriced Zeiss 1.8/23mm lens for the Sony I decided to get the Fuji 2/23mm lens and got the X100 that comes with it for free. That time I used to travel a lot to former Eastern Europe for business and the NEX 5 and later the X100 was always with me.

Especially the Fuji X100 was the perfect camera. Very good high ISO, quiet as a mouse and small enough to put it in the thick down jacket I used to wear when I went to Moscow during winter.

I took a couple of shots with my Fuji F31fd compact but only because I forgot to bring a camera to a business trip to Prague and Carlsbad. The Fuji F31fd I put into my car for “emergencies”.

Lots of iPhone shots because I took no camera on a trip to Bucarest. 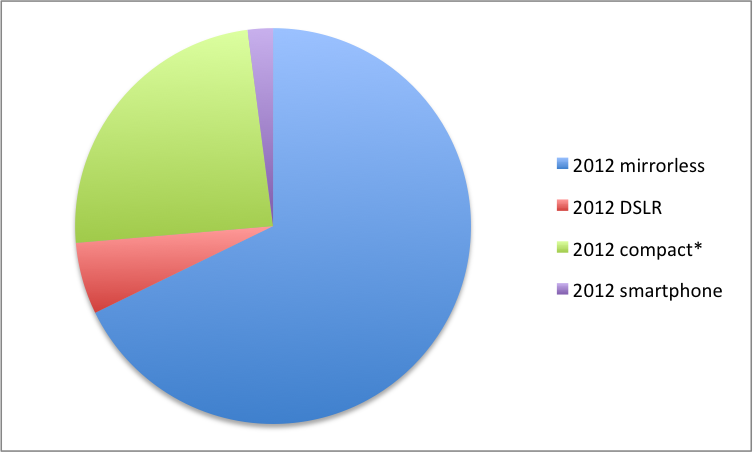 What happened in 2012? Almost no pictures taken with my DSLR. There are a couple of reasons but the most important one was that we did not go on an oversea vacation but stayed in Europe. We went to a two weeks trip to Croatia and I decided to leave my DSLR at home to test how it feels to go mirrorless on vacation. The other reason was that my much beloved Canon 5D felt clunky and old compared to the much newer mirrorless cameras.

I took my Fuji X100 and the Sony NEX-5. It worked very nice but I missed longer focal lengths. I just had the kit zoom and the 16mm ( 24mm ) lens for the NEX-5 so the longest lens was a 80mm ( full frame ). I considered to get the 18-200 for the Sony but didn’t like its size. One of the real disadvantages of mirrorless cameras: Longer lenses are rather big and heavy.

Compact* means the Sony RX100. A big sensor compact camera I bought in 2012. I used it a lot and loved the image quality and of course its size but never liked the user interface and shooting experience. It simple was not the right camera for me.

I used no “real” compact cameras and took only a couple of photos with my iPhone. 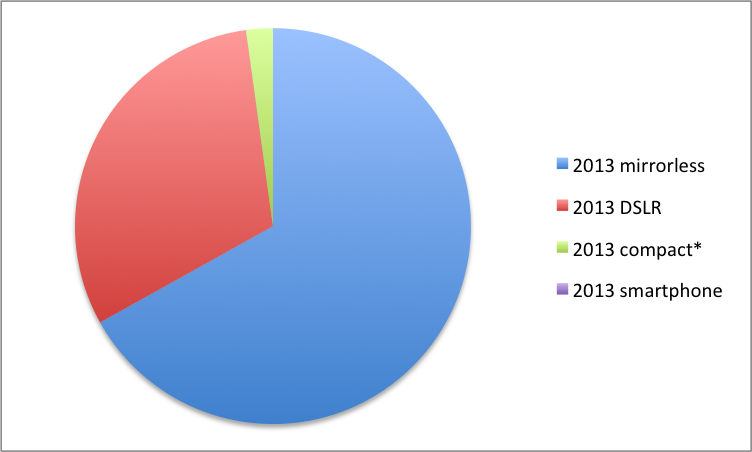 I also went to California for a three week vacation and used mainly my new Canon 6D. Kind of rebirth of DSLR for me. The 5D was a fantastic camera but it really started to feel old. The 6D has all the modern features like Auto-ISO or sensor cleaning and fantastic image quality at low and high ISO. It also features GPS which is very nice when traveling. It was my main camera during the trip but I still used the XP1 a lot in the cities.

There is a small rest of images taken with the Sony RX100 that I sold. It has been replaced with the Ricoh GR. At christmas I got my first m43 camera. A Panasonic GM1 that I plan to use mainly on hikes with Panasonic’s 14-140 lens or as a social camera with the 1.8/17 and the 1.8/45 from Olympus.

DSLR vs Mirrorless after almost 5 years: 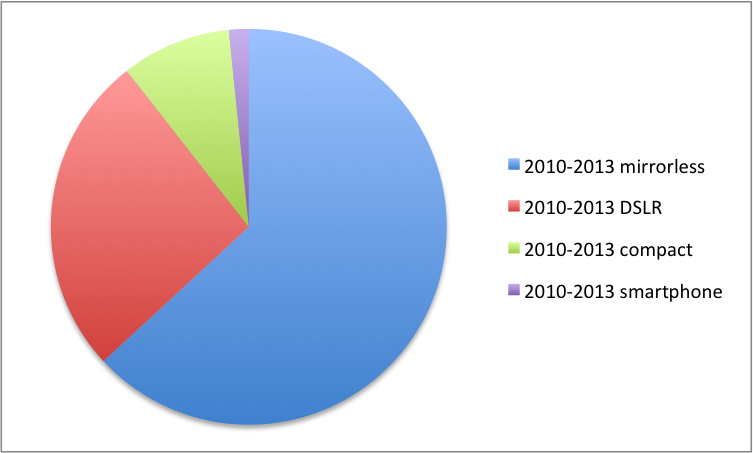 Since 2010 I took more than 60% of my images with mirrorless cameras and only 26% with DSLRs. Have DSLRs become obsolete for me? No, I still love to shoot them but I don’t like to carry them around. The high percentage of shots taken with mirrorless cameras is due to the fact that I travel a lot for business where I never would consider to bring a DSLR. Last year I traveled about 8 weeks for business and spent 4 weeks on vacations. Only on the big trip to California I brought my DSLR. So 9 weeks traveling with mirrorless only vs 3 weeks with DSLR ( and mirror less of course ).

Because of an accident that put me on sick leave for a couple of weeks I did not travel so far but stayed at home and shot mainly with the Panasonic GM1 and also with the Canon 6D. I just replaced the Canon 24-70 IS and the Canon 35L with the excellent Canon 2.8/24-70 II. As a consequence my Canon 6D will see more use. Weight aside it acts like a mirrorless with primes but with fast AF even in poor light.

No compact camera anymore and practicably no smartphone photography means that the diagram for 2014 will only show two camera types. The mix will be similar to 2013.