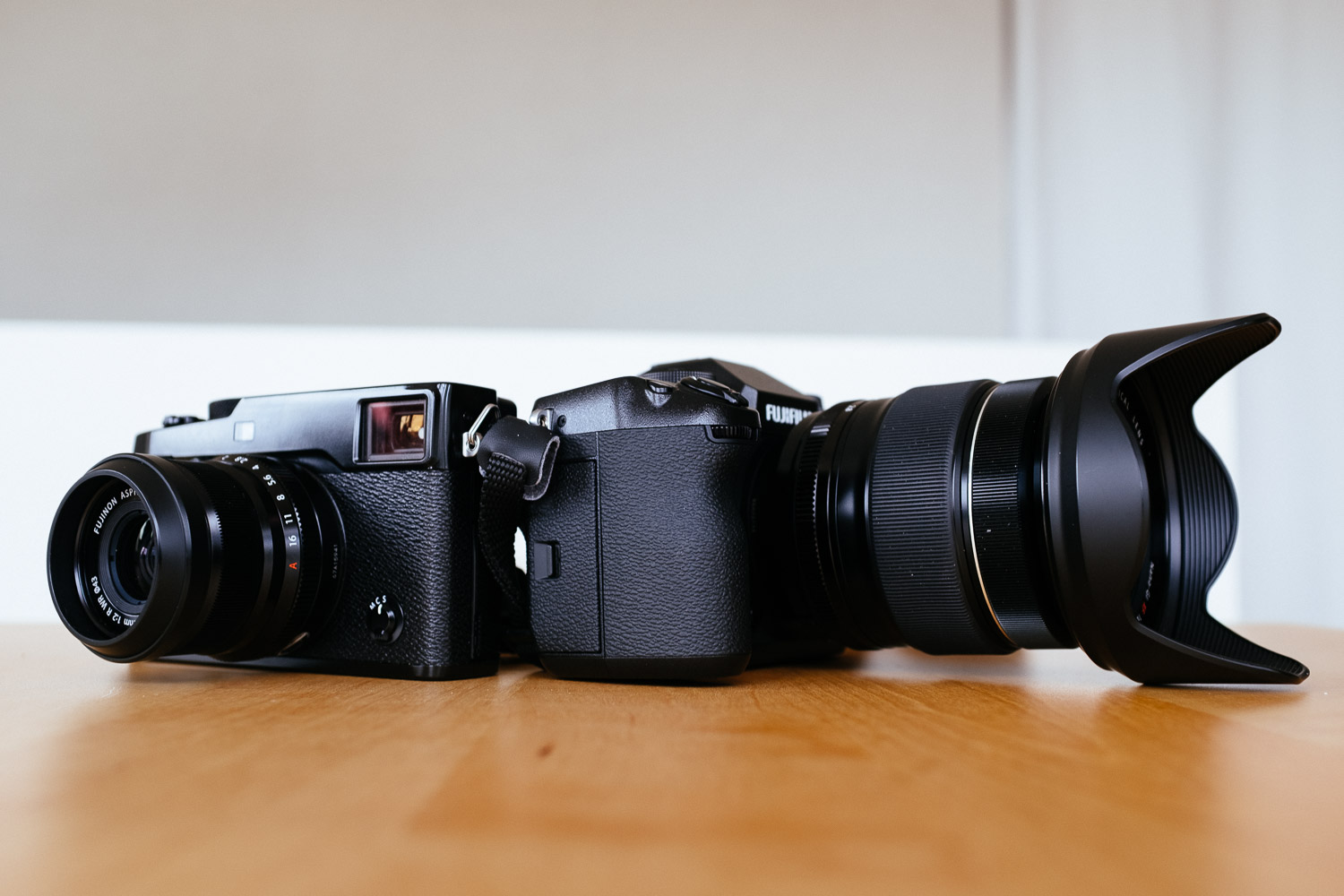 In December 2012 I got a second hand Fuji X-Pro1 as a small camera beside my Canon FF gear. Since I got the X-Pro2 in Spring 2016 I only shoot Fuji. Time to look at the cameras.

Within the ten years with Fuji I bought and sold many cameras. On this blog post I will review the Fuji cameras that I kept in chronological order.

First my camera history: When the Fuji X100 came out the layout and look of the camera reignited my passion for photography even though I never shot a range finder style camera before. I’m not that old. I started with an old pure mechanic SLR from my dad (Exakta VX1000) , over to a Nikon F801 and a Nikon F100 in my slide film days with a Contax T2 is a small camera to shoot beside the SLRs.

Regarding digital I was an early adopter with a Nikon Coolpix 950 in 1999. In January 2002 I already completely switched to digital with a Nikon D1 that I bought second hand. My last rolls of Fuji Velvia expired. Of course sensor technology and digital cameras progressed a lot in those early days so I went through way too many cameras. After my Nikon gear was stolen I tried out and switched to a Canon 5D. Back then there was no full frame camera from Nikon.

I got the Sony NEX5 when it came out and that little camera changed everything for me because it was small and light but had an APS-C sensor which was superior in low light compared to the Canon 5D that I still shot at that time. There was no way back for me. Even though I upgraded to a Canon 6D and also owned a Sony 7AR for a short time to use with my Canon glass I just loved to shoot with a small camera.

The Sony NEX5 was full of promise but also full of compromises. Handling was not ideal, the shutter was annoyingly loud and there were no lenses. When Sony finally brought out a nice 24mm lens from Zeiss it was so expensive that I got the Fuji X100 instead and this camera truly changed everything for me. It was just brilliant. End of camera history back to my current cameras from Fuji.

Fuji X-Pro2: My favourite camera of all times. Fuji took everything what was great in the X-Pro1 and improved every single detail. There are numerous reviews of the X-Pro2 and the Fuji shooting experience on my blog. I’m fully aware that some read almost like love letters. Anyway: I think what makes the X-Pro2 so special for me is that when I take pictures it completely disappears. What I’m trying to say is that all the technical aspects of photography disappear which allows me to focus solely on my subject instead of camera settings. Shooting the X-Pro2 is like driving my car. Everything feels natural, I don’t have to focus on the the driving part but can enjoy the landscape instead. This in short is what shooting the X-Pro2 is for me and why I never can sell this camera.

Beside that: I shoot this camera since March 2016. I took it around the world a couple of times because it was with me on three vacations in the USA and also on countless business trips to India, South East Asia and East Asia. Dust and heat in the deserts, high humidity in Asia and freezing cold in the Austrian alps. It never had a malfunction or even shut down, nothing came off and it still looks like new. That’s what I call a professional camera. In short: This is as good as it gets.

Fuji X-H1: Shortly after the X-H1 came out I was in Japan and of course I had to try it out. I played with it and I was impressed though I didn’t like the idea that it had a display instead of the exposure compensation dial. And of course I was not happy with the weight. Here are my first thoughts four years back: https://www.littlebigtravelingcamera.com/?p=11668

I never bought it until I wanted a second camera for an upcoming vacation in 2019. At that time the price of the X-H1 came down so much that I simply could not imagine to get a X-T30 instead. Because let’s face it: the X-H1 is brilliant and its execution is flawless. The shutter is out of this world: Whispering quiet and perfectly damped and the shutter button is great too. Build quality is something special and even surpasses the X-Pro2. If you appreciate attention to detail the X-H1 is just a joy to hold in your hand and to operate. The only reason why this is not my main camera is size/weight and that I still prefer the layout of the X-Pro body.

In short: This is a brilliant camera and if you mainly shoot with larger lenses I think this is still the camera to get. That or the new X-H2S of course.

Fuji X-Pro3: This is going to be more difficult for me. I had high hopes for the X-Pro3. I wanted the brilliant shutter and IBIS from the X-H1 but what we got from Fuji instead was a weird rear display design. Of course I was disappointed and very vocal about it on dpreview. But times go by, we get older and we get little wiser. So last January I finally thought it was time to fight my pre-justice and to give it a try.

So how is it? It replaced my X-Pro2 as my main camera because it just feels like the X-Pro2 but with a slightly better sensor, better AF in low light and improved EVF. I have this camera now for more than five months but thanks to the Corona aftermath there was only one very recent trip to Japan so far. The main improvement for me is the EVF which is now truly excellent. This is the best EVF I have seen so far not because of resolution but because there is almost no lag. This is the camera for people who hate EVFs but not because of its OVF but because its EVF is so good. AF has become quicker in poor light or low contrast situation. Now eye-AF is a real option even with the XF35/1.4R. But it is not night and day. I can’t say anything about AF tracking because I don’t use that.

I also prefer the new sensor for its colours even though it seems that there is a little more noise in high ISO shots. Again: not night and day. This is hardly the case anymore since digital photography has entered a matured phase some time ago. There are no ground breaking advancements anymore instead it’s little tweaks.

So that is what the X-Pro3 is for me: an improved version of the X-Pro2. I’m still not sure if the rear display design is a stroke of genius but it doesn’t have any negative impact on the way I shoot. It doesn’t have a positive impact either because most of the time I forget that I could use it to shoot from the hip.

My wishes for a future camera: I would prefer if Fuji would keep it simple. I’m fine with the X-Pro3 body design but wouldn’t mind to go back to the rear screen design of the X-Pro2. I have no problem with it regarding handling but it is one more thing that has the potential to break. Beside sensor and AF updates I would really love to see the shutter of the X-H1 and IBIS and a new battery.