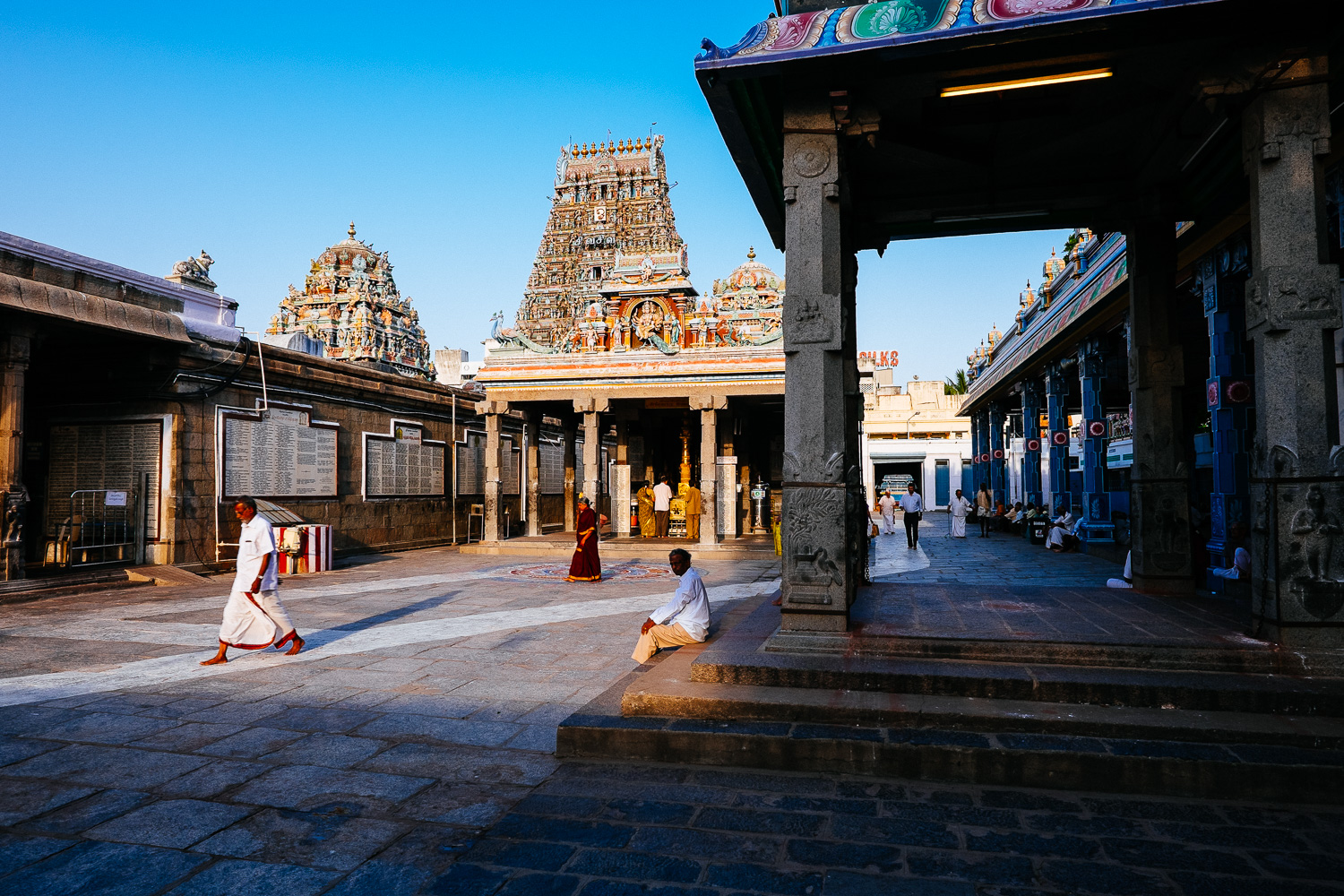 I love the temples of Asia. This one in India is one of my favorites.

The Kapaleeshwarar temple in Chennai. I have been there before but arrived after sunset: Two Penguins in India. This time I chose to stay in a hotel close to the temple and the Marina beach. 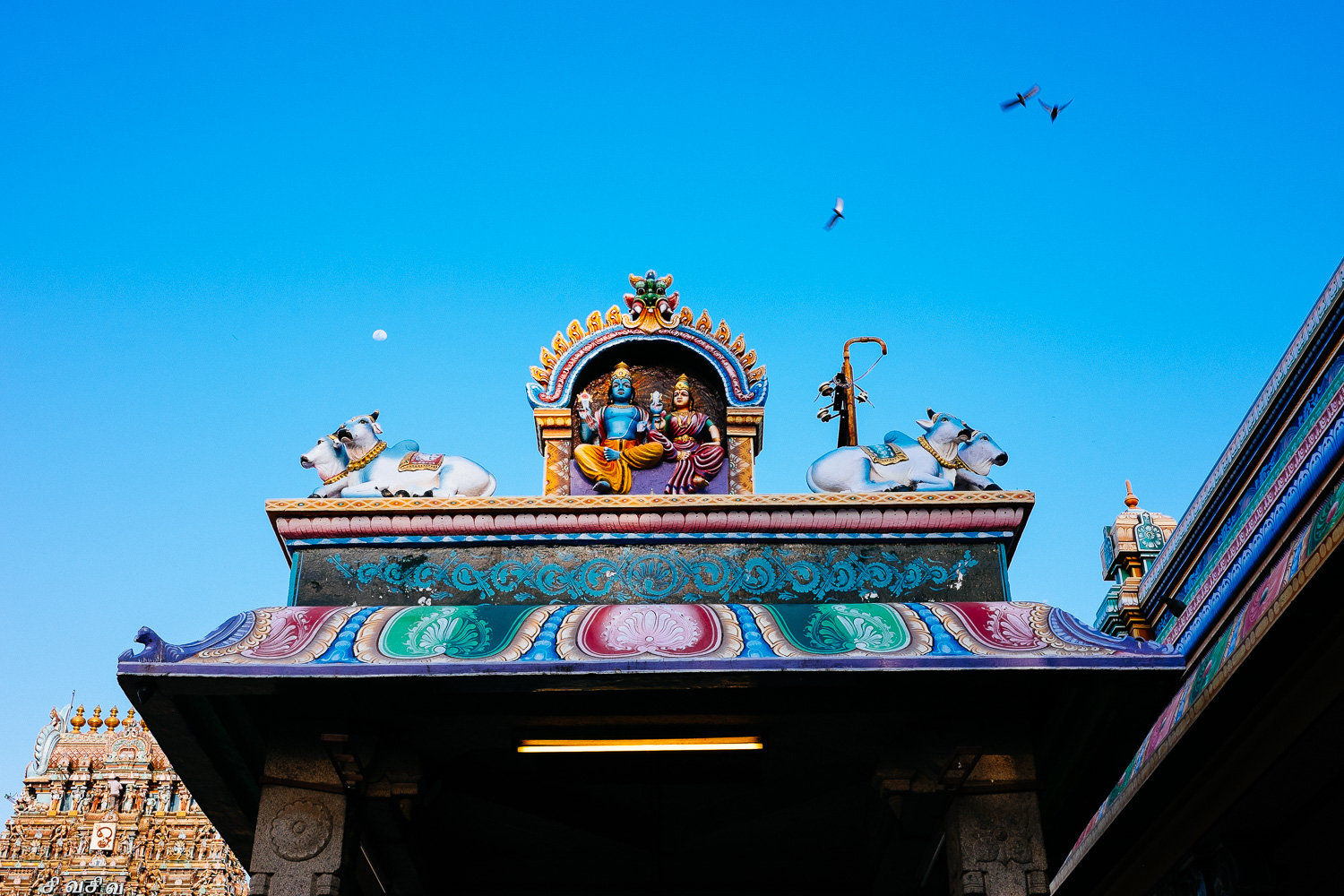 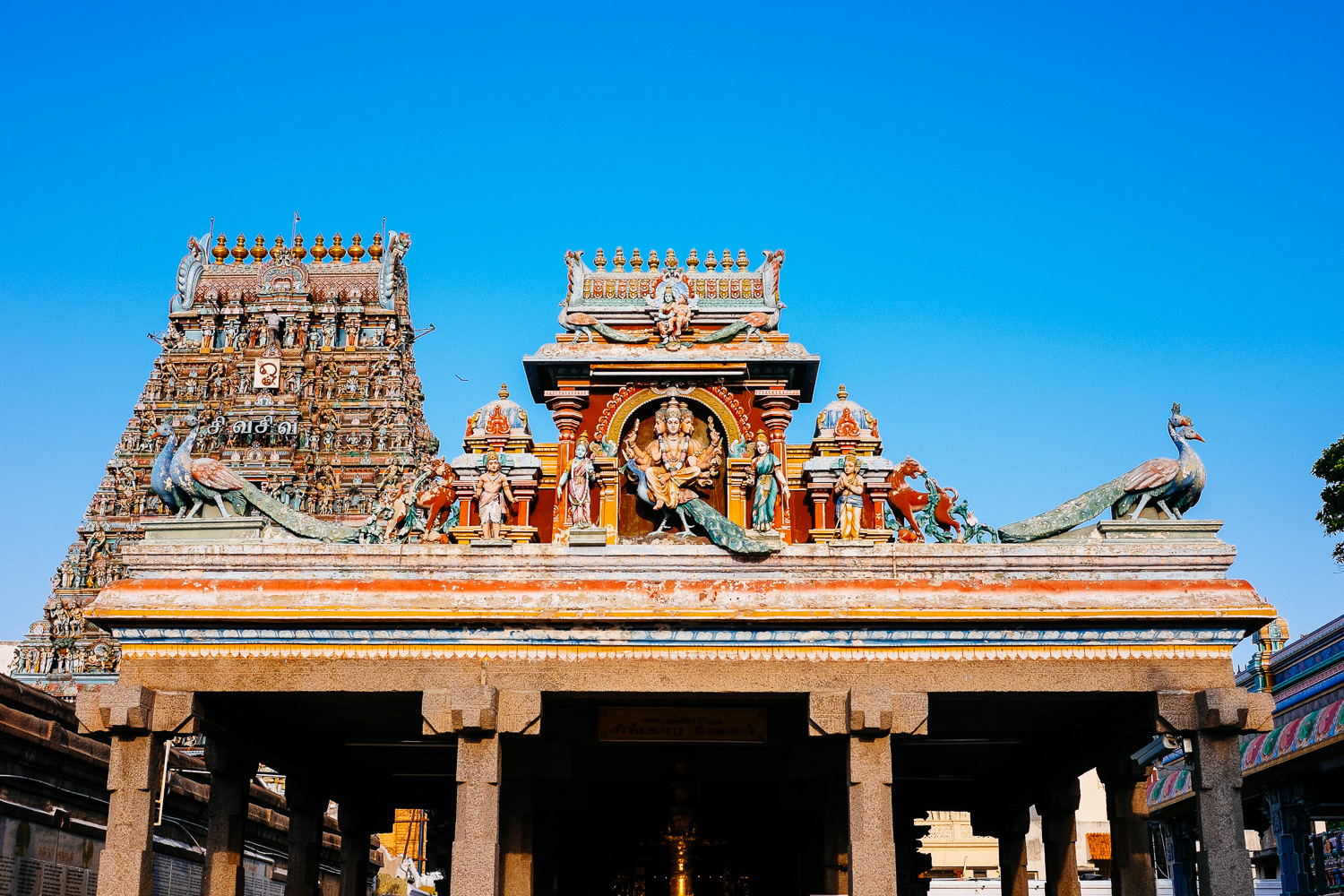 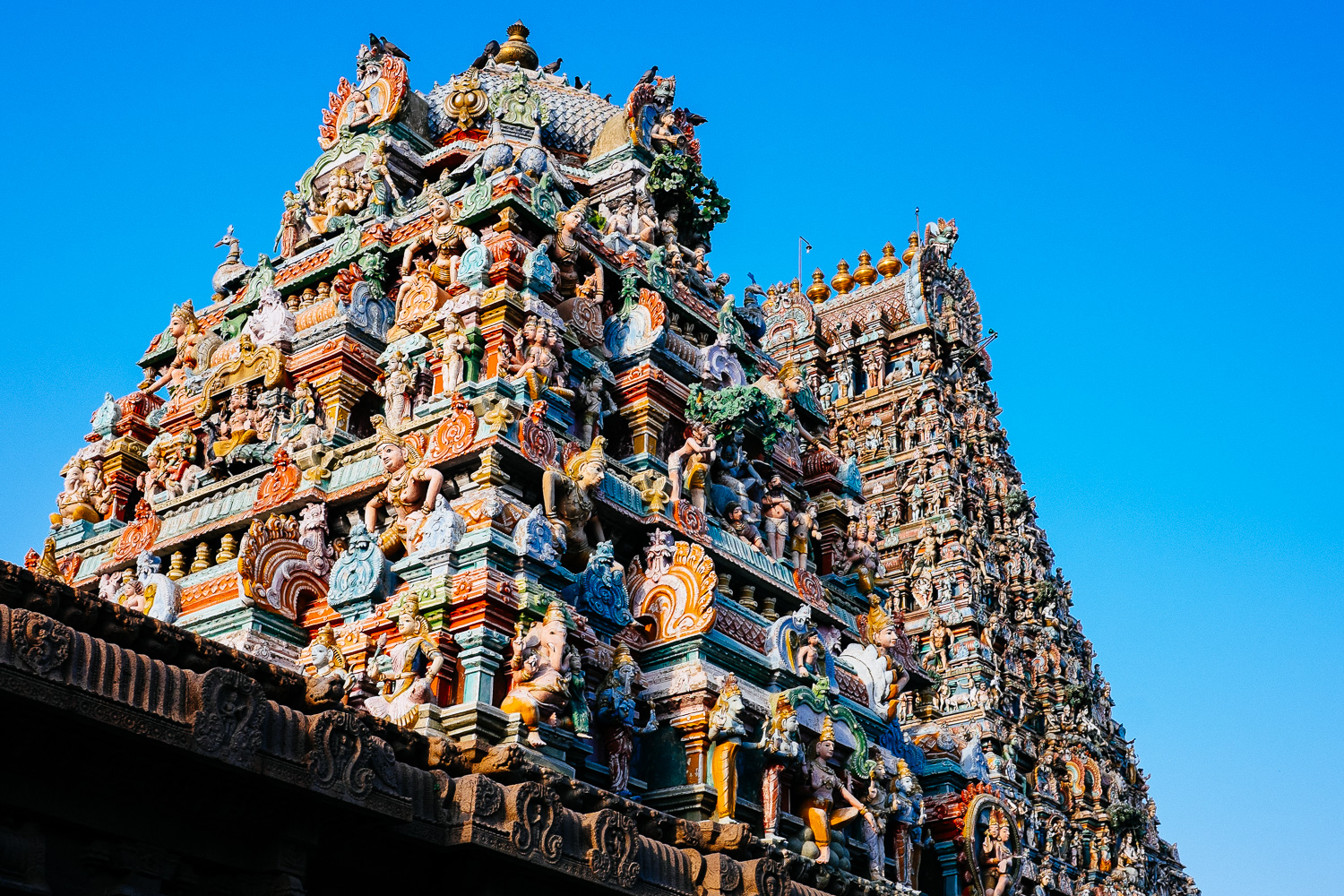 Indian temples are colorful and busy. This one is no exception. I especially like its so called Gopuram (see image above: the large rectangular entry tower in the background) with its colorful and detailed ornaments. There is so much to see and I have no idea how they clean and maintain them. I guess all the little figures will be painted on a regular base.

On this trip to India I took only two lenses. The Fuji XF 14mm and the Fuji XF 27mm. The lightest camera gear I ever used beside the trip to Santorini/Greece where I took nothing but my Canon Ixus V2 plus a small table top tripod. In Greece there was no need for a bag. Here I still need a camera bag for a couple of reasons. First it is so hot that I never wear a jacket so I need the bag also to carry two smartphones, my wallet, my passport plus a small bottle of water. The water bottle is the equivalent of a tele zoom or the 56mm but it is essential and it gets lighter.

So the 27mm as a second lens helps to save weight and the best thing is that its image quality is impressive not only for a pancake. It compliments the 14mm and gives me the chance to focus on a detail. 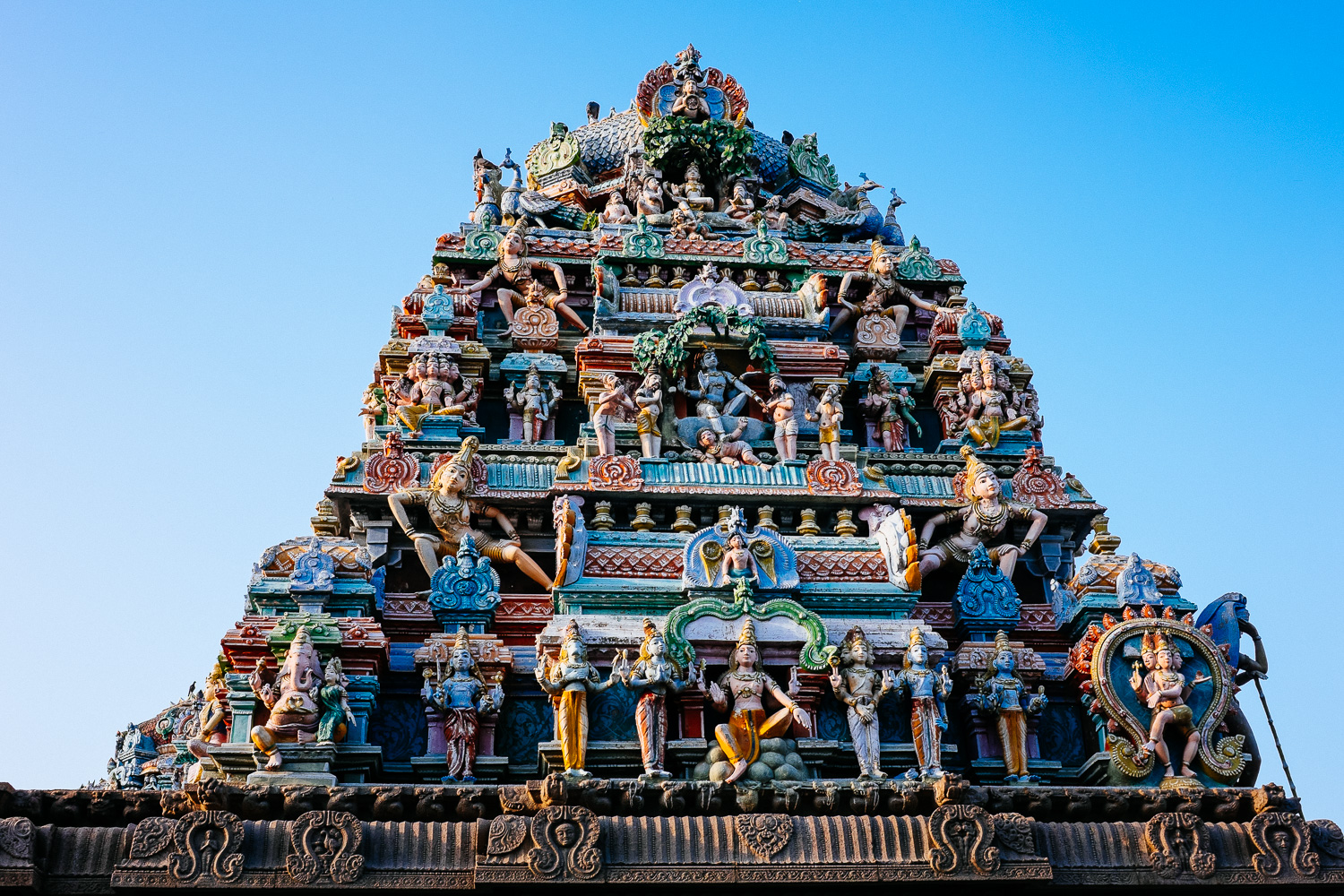 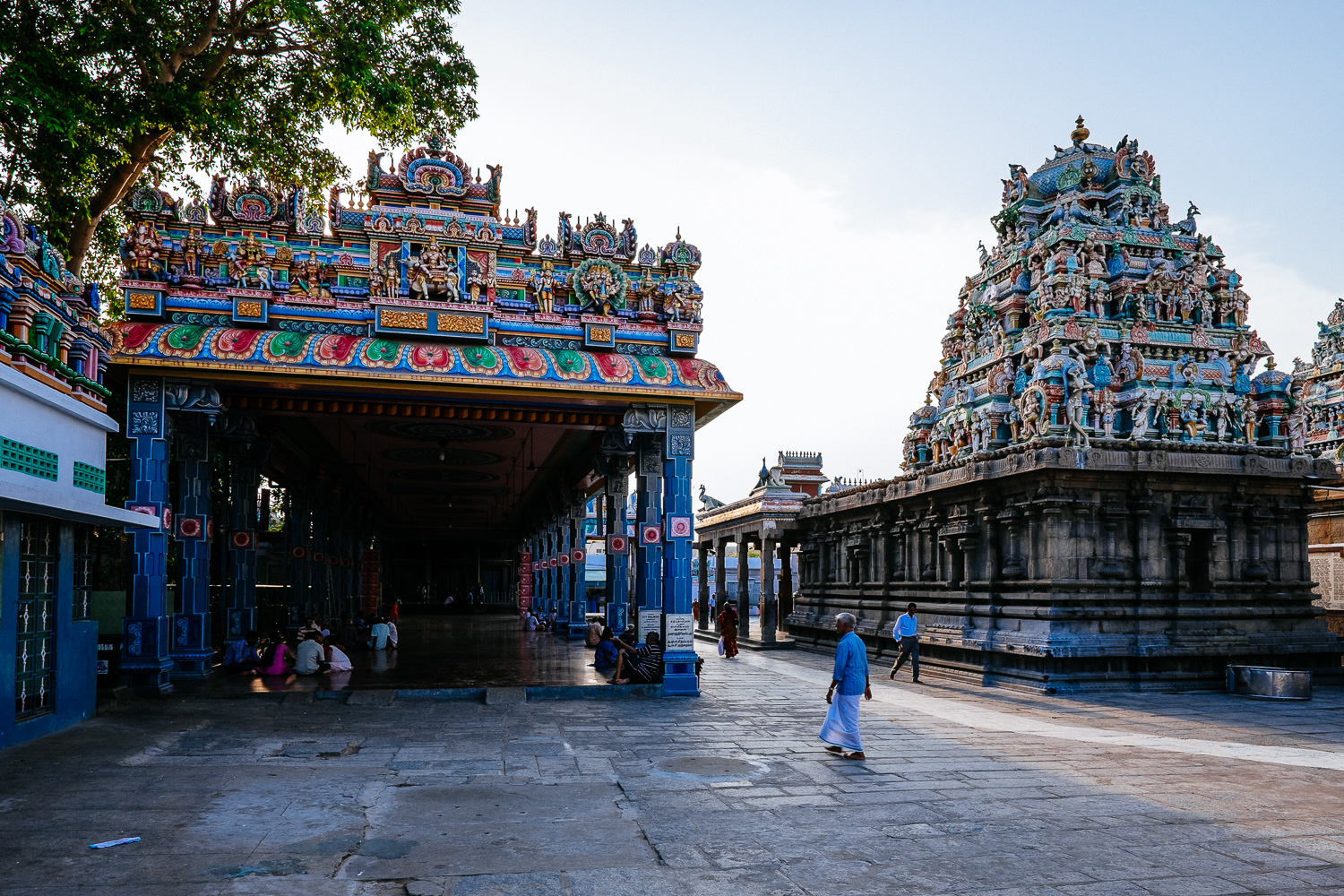 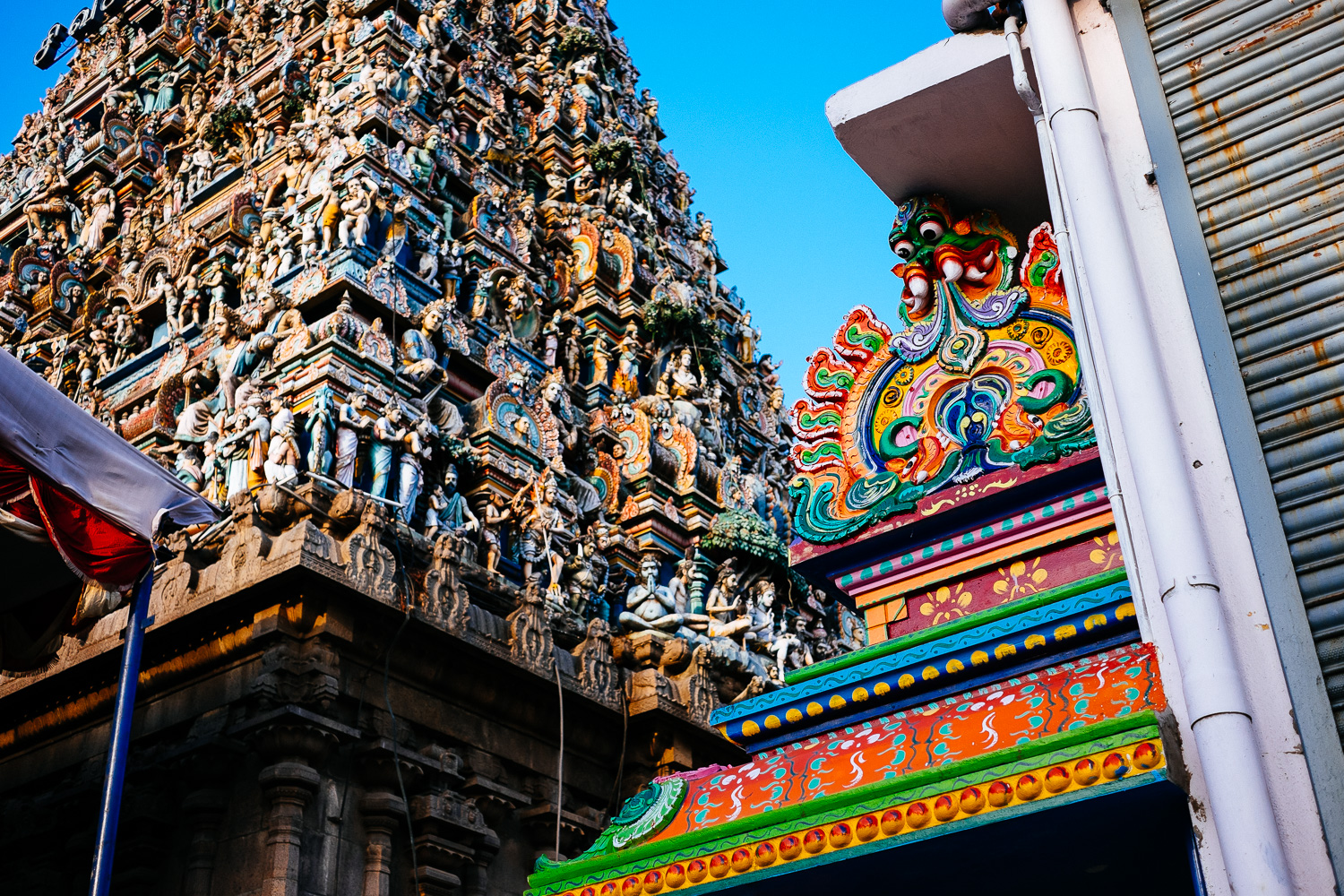 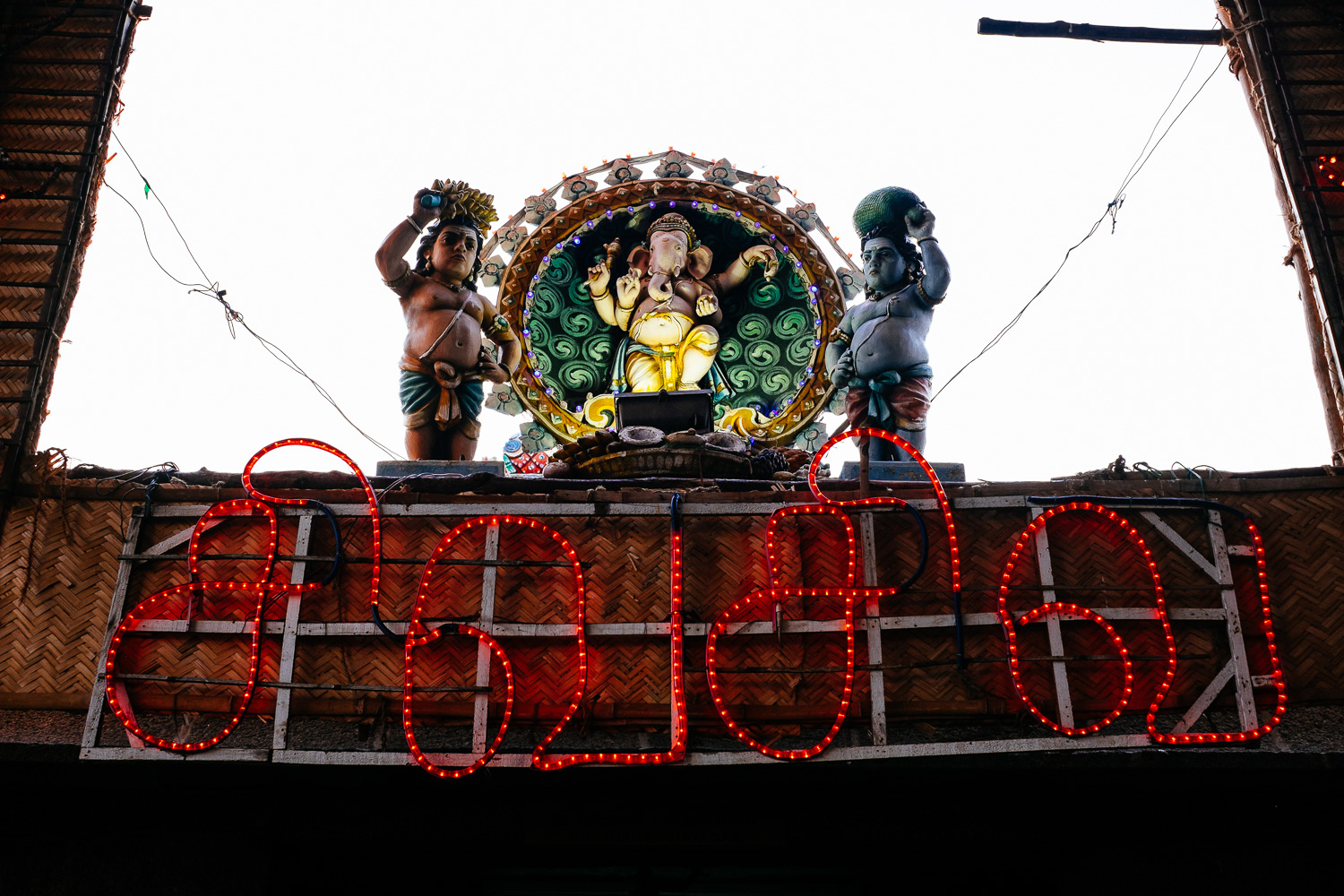 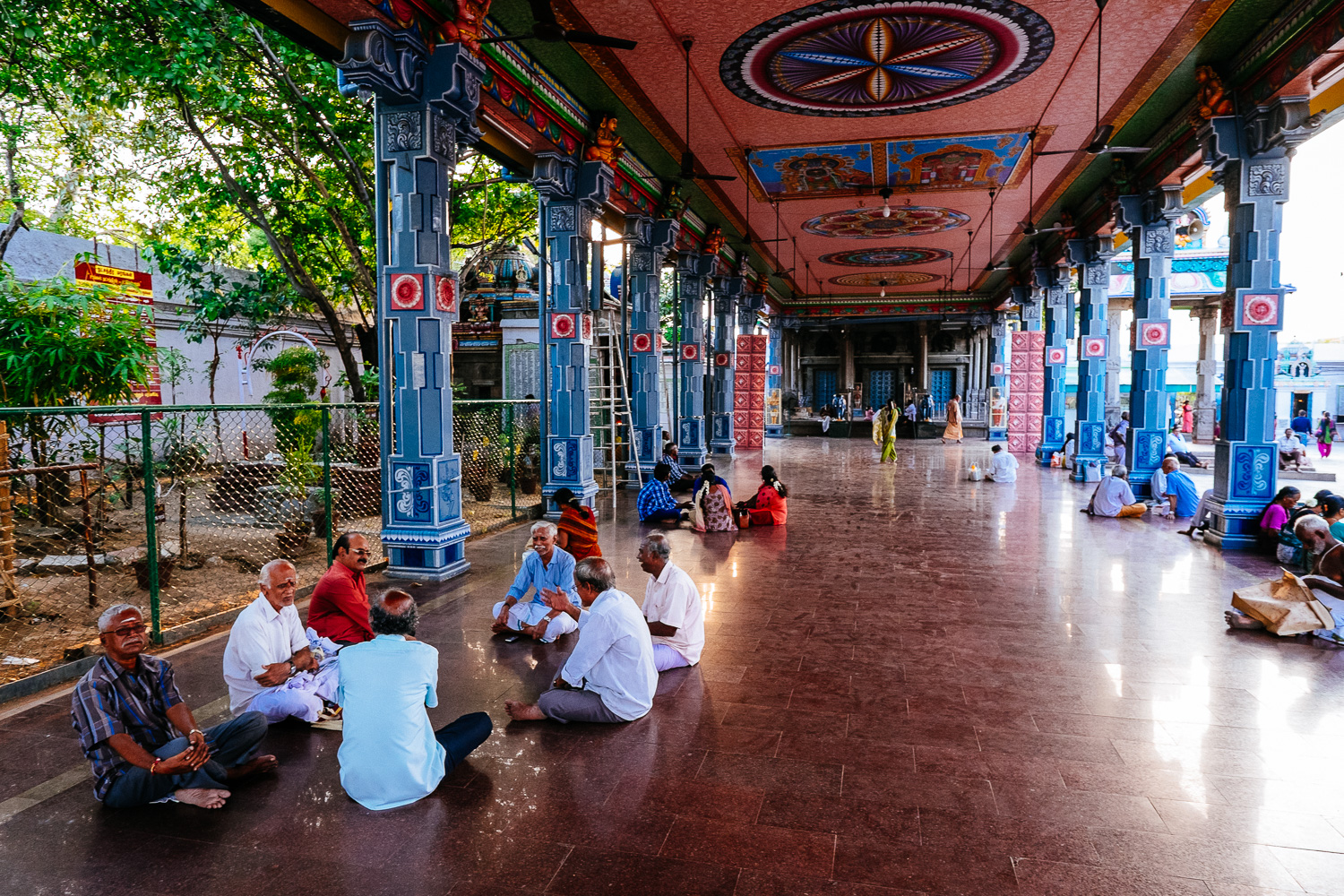 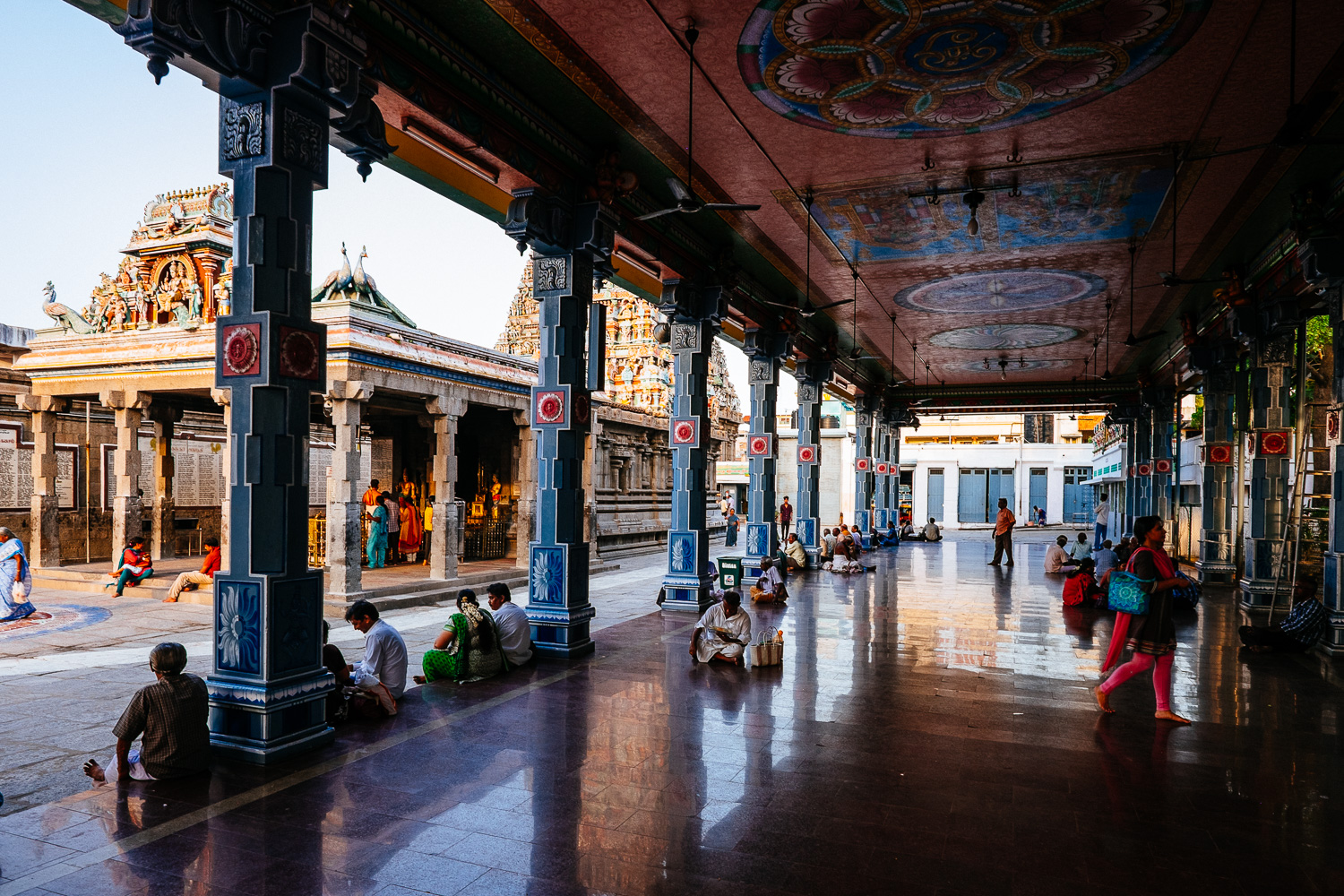 The 14mm remains my favorite lens but to also pack the 27mm is a no brainer for me now. It is super small and weighs next to nothing. I think twice before I pack the 23mm lens and I never took the 56mm lens on any of my trips so far. It is just too big and heavy. But I need to mention that I’m talking about business trips here where photography is restricted to after work and weekends. It would be a different story if I would go on vacation in Asia. But I would still hesitate to put it in my bag if I plan to walk around the whole day.

Especially in Asia where it is hot and humid you should avoid to run around packed like a mule. Keep it light and simple! Of course you could also only take the kit lens but the result  is not the same. The kit lens is simply not wide enough and it suffers distortion on its wide end. The 14mm is wide, has zero distortion and offers an incredible image quality. And while the 27mm is not faster or significantly better than the zoom lens at this setting it is much smaller and light. Both lenses together weigh no more than the kit lens.

But the 14mm and the kit lens is also a nice combination if you need to have an IS lens and want the flexibility of a zoom. Both share the same lens cap and lens shade which is handy when you switch between them. I still prefer the 14mm plus 27mm combo because of weight. If I’m willing to carry more I rather take my 23mm instead of the kit lens.

I like what I saw so far from the new 35/2 but I will pass that lens. I would replace my 23mm and my 56mm lens for lighter and smaller f2 versions in a heart beat. 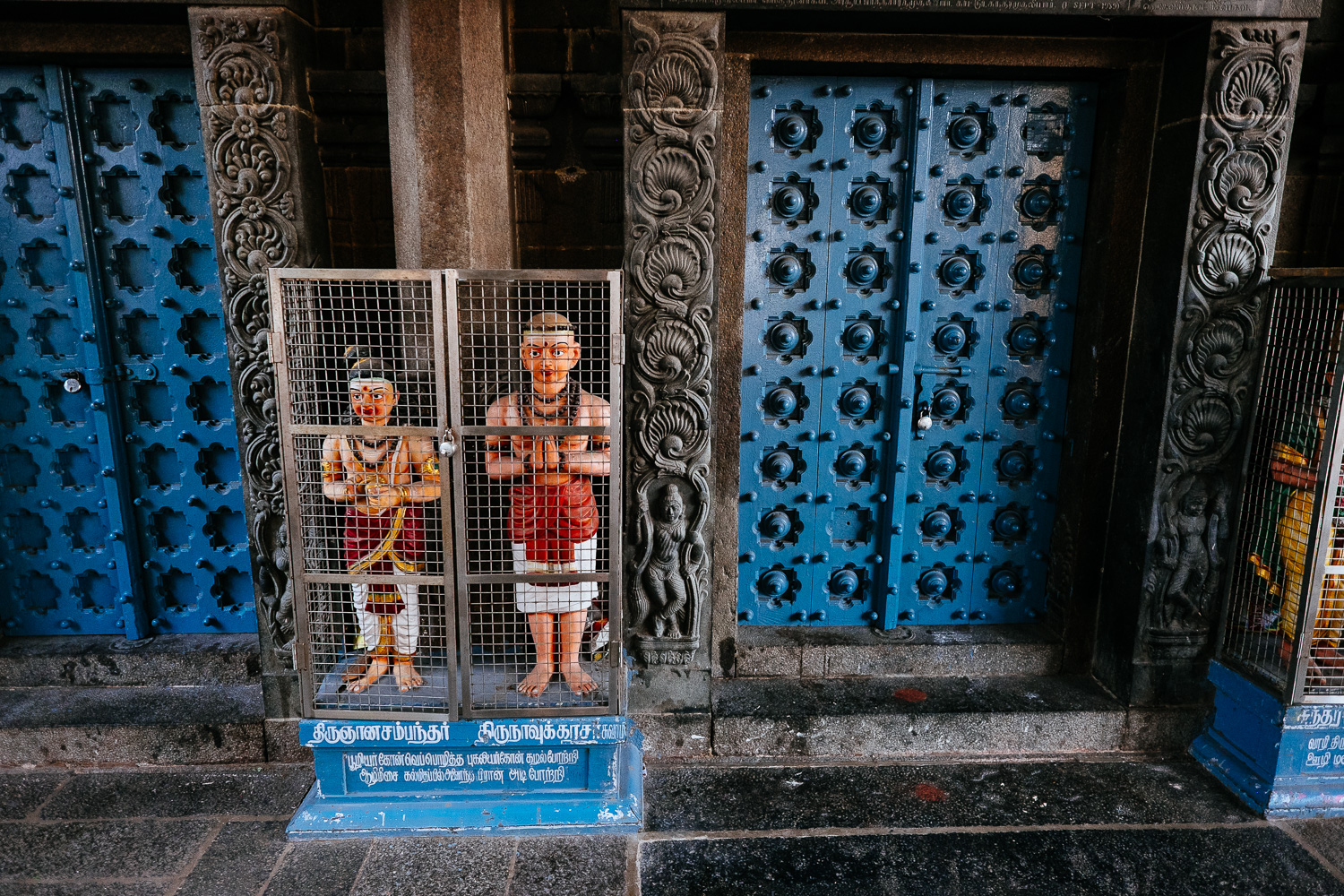 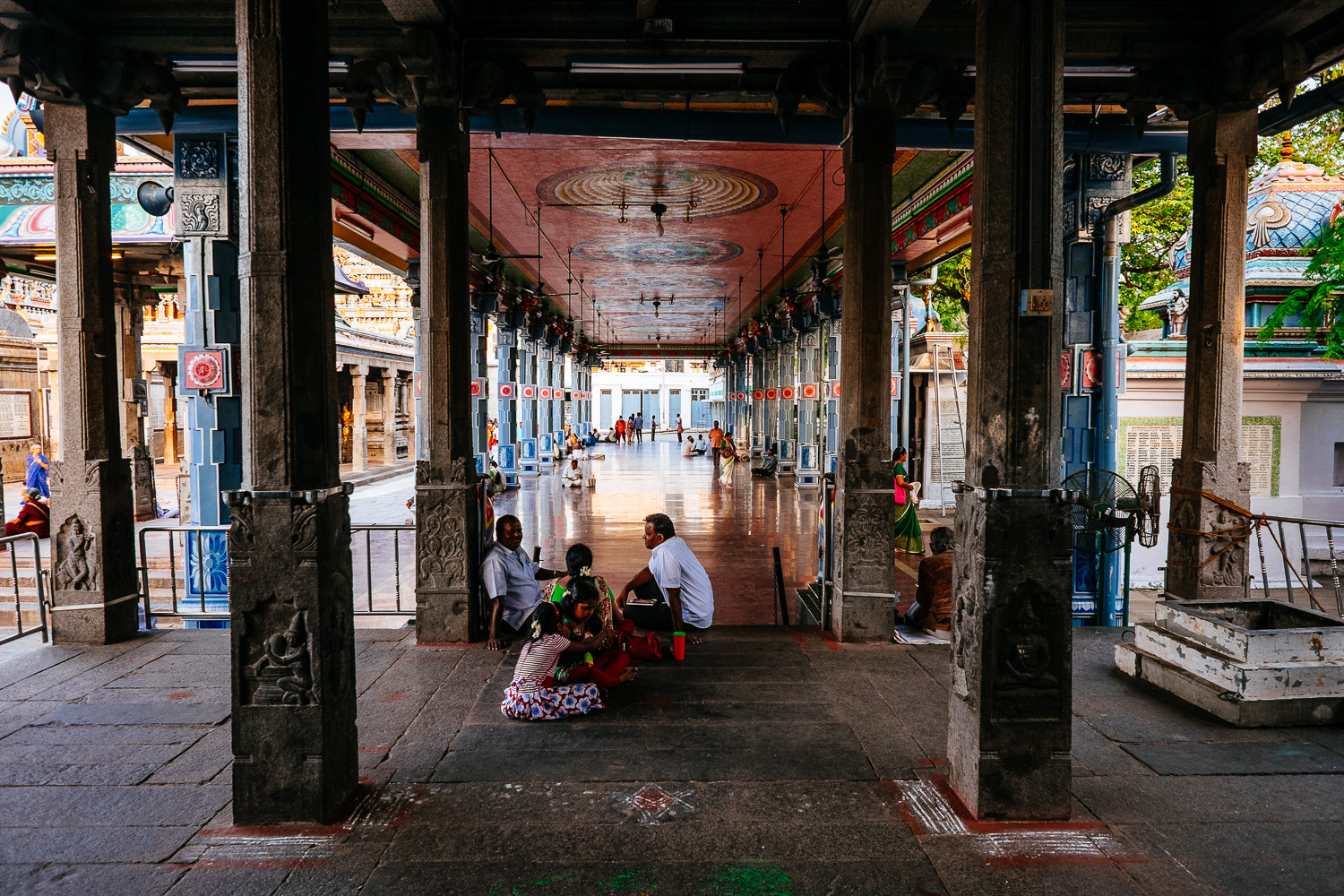 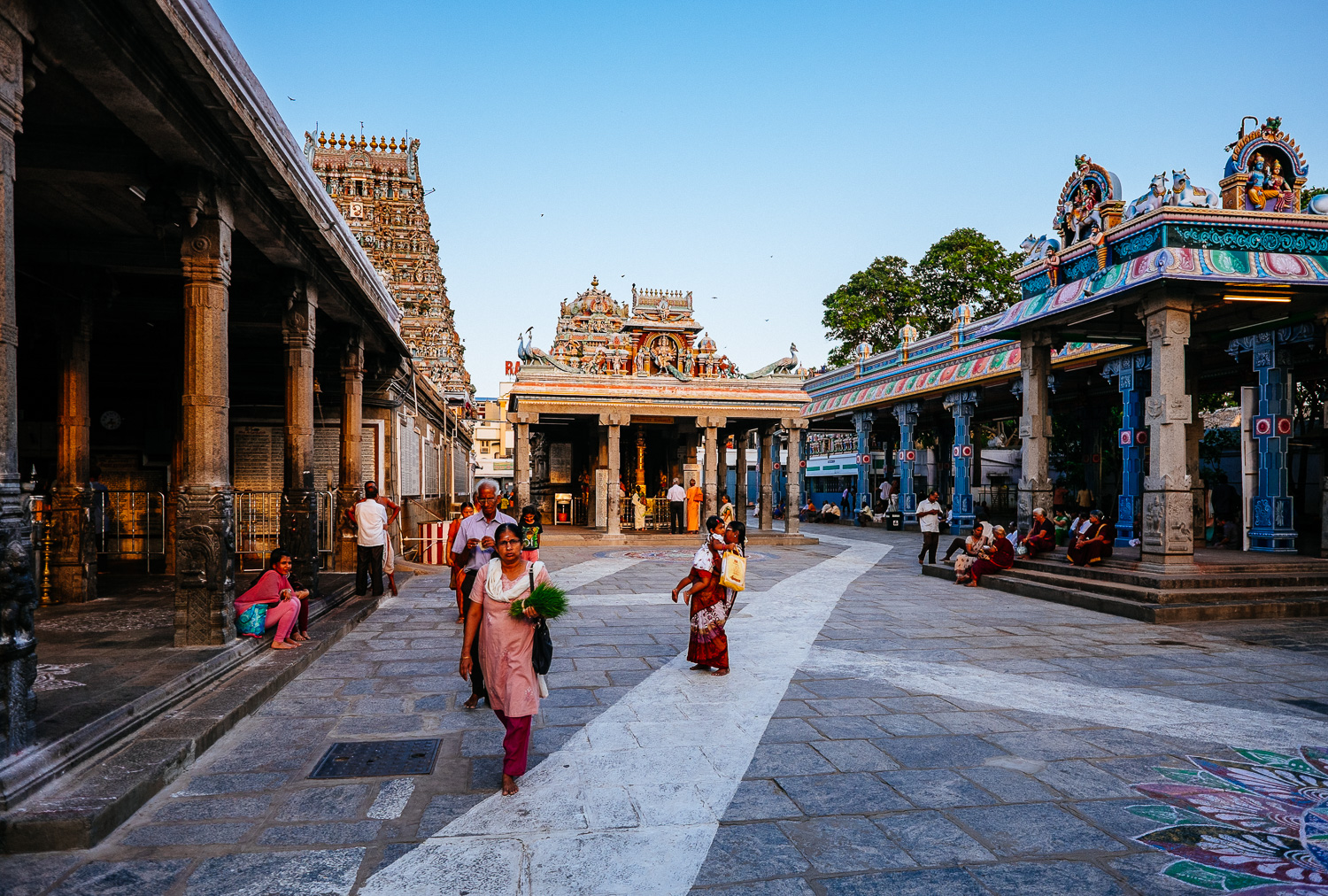 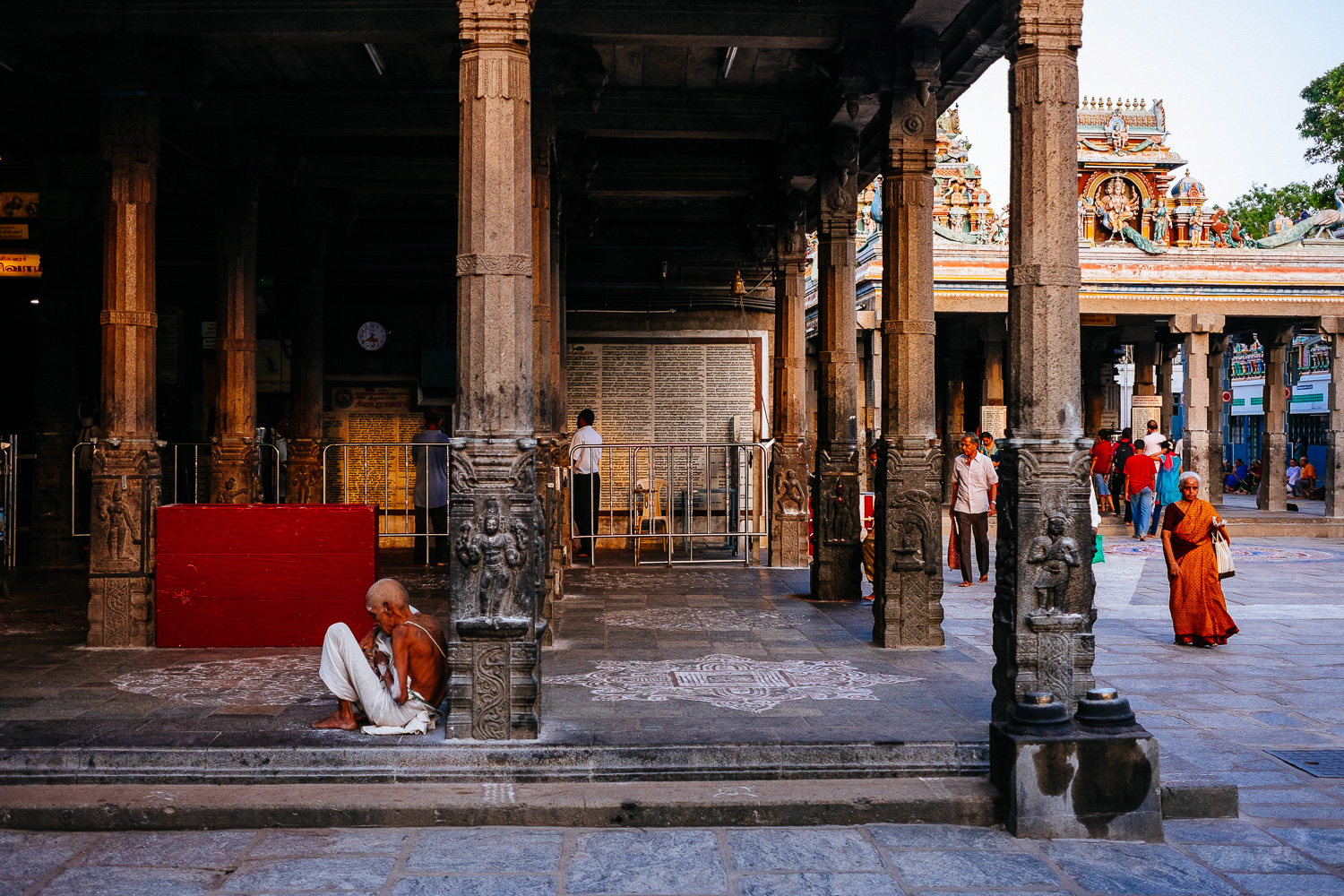 I hesitated to share the following story with you but it is part of every trip to Asia and especially India. As you can see in all the images: there are no white people. The only two with bright skin were my colleague from Malaysia (who is a Chinese Malay) and me. So we stood out like pink elephants. It didn’t take long till we had a personal guide. We didn’t ask for it and I tried to get rid of him but wasn’t successful.

So he shared a lot of not so accurate facts about the temple and asked us to donate some money in a temple for the victims of the Tsunami. Of course we were not allowed to enter this temple but if we hand over the money to him he would deposit it there for us. We didn’t spend money for “the Tsunami victims” but unfortunately he didn’t give up. At the end of the “tour” he asked for money. Though we never asked for a tour I tried to give him some money to get rid of him but it wasn’t enough. He started to complain and that he gave us a perfect tour through the temple. He followed us outside the temple and to our car. We entered the car, locked the doors and asked the driver to leave the place.

I love India for its outstanding photo opportunities on every corner but sometimes it is hard to deal with the fact that for some people here think that you are dumb and nothing but a cash machine. 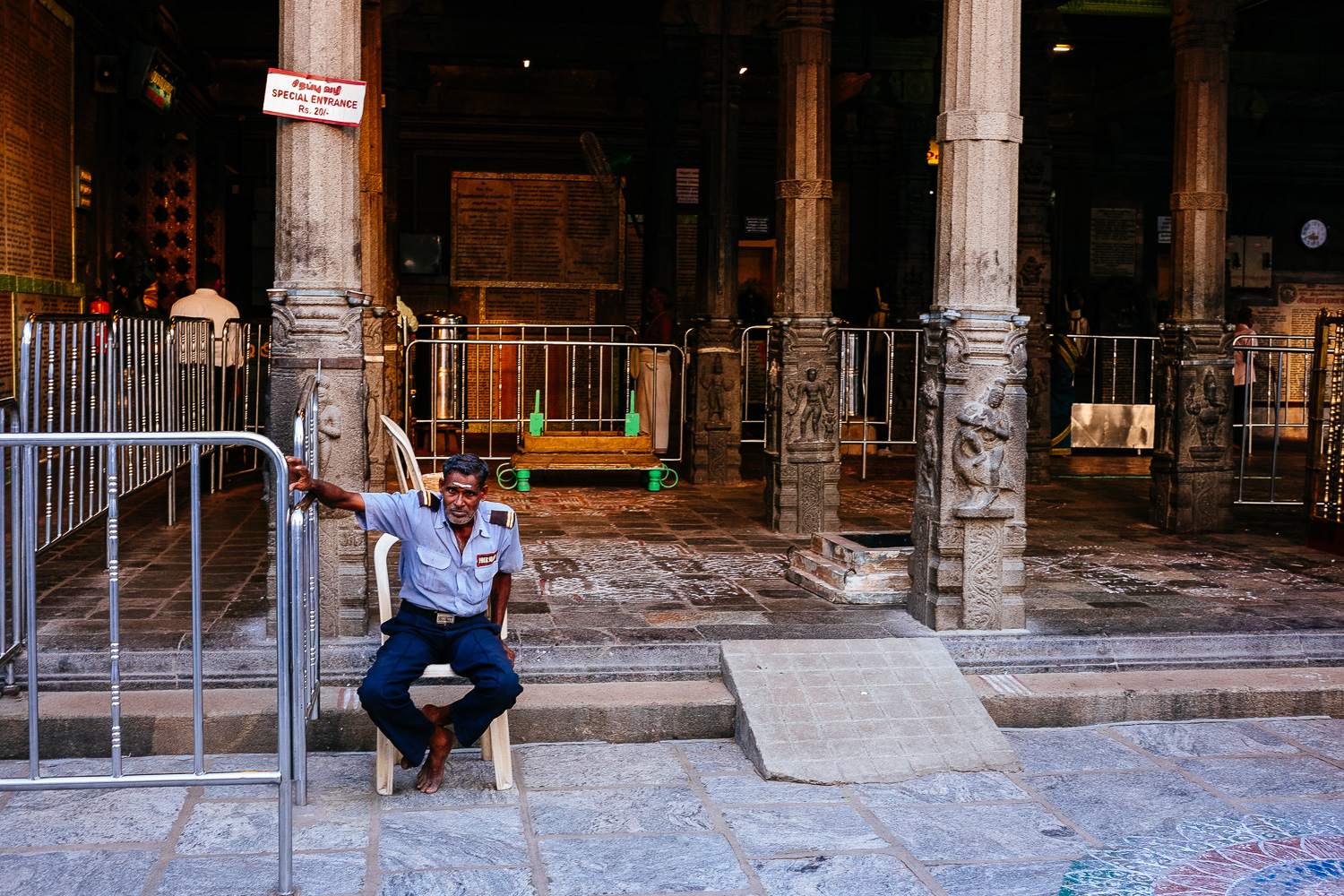