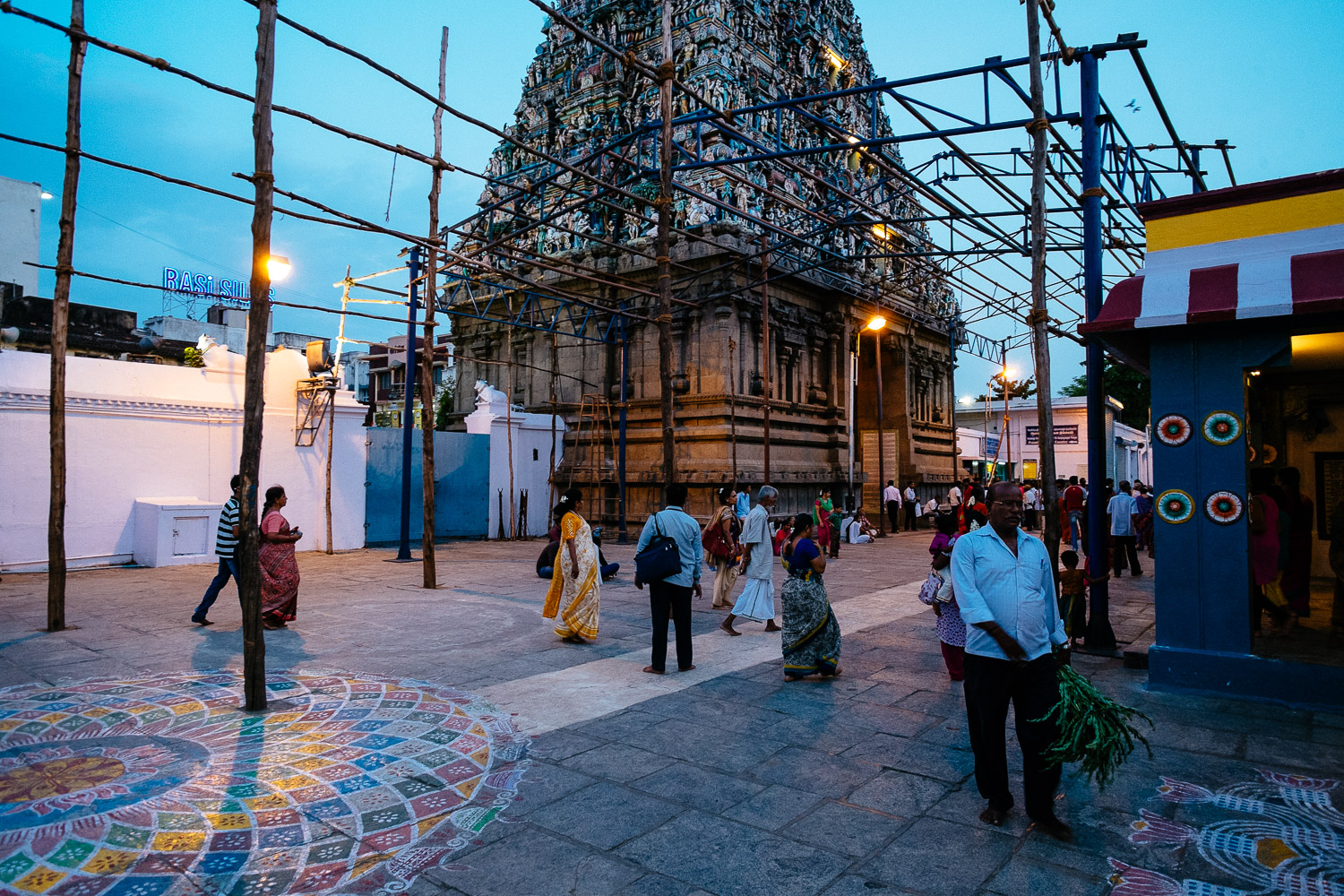 After a couple of “out of the car” shooting days I managed to take some real shots during my stay in Chennai. It was almost too late when we finally reached the Kapaleeshwarar Temple.

The sun has set already but at least the sky was still bright. Almost too bright for balanced exposures. I did some post processing beside my usual VSCO film thing on the two GR shots to give some additional light to the stucco figures of the gateway tower. I know I might have mentioned this before but I can not tell you how happy I am with todays digital cameras. The GR is hardly bigger than a Canon Ixus but the image quality is breathtaking. Small does’t mean compromises anymore. It’s like a Contax T2 but even better because back than I shot the 40 ASA Fuji Velvia while today I can raise ISO up to ISO 6.400 if needed. 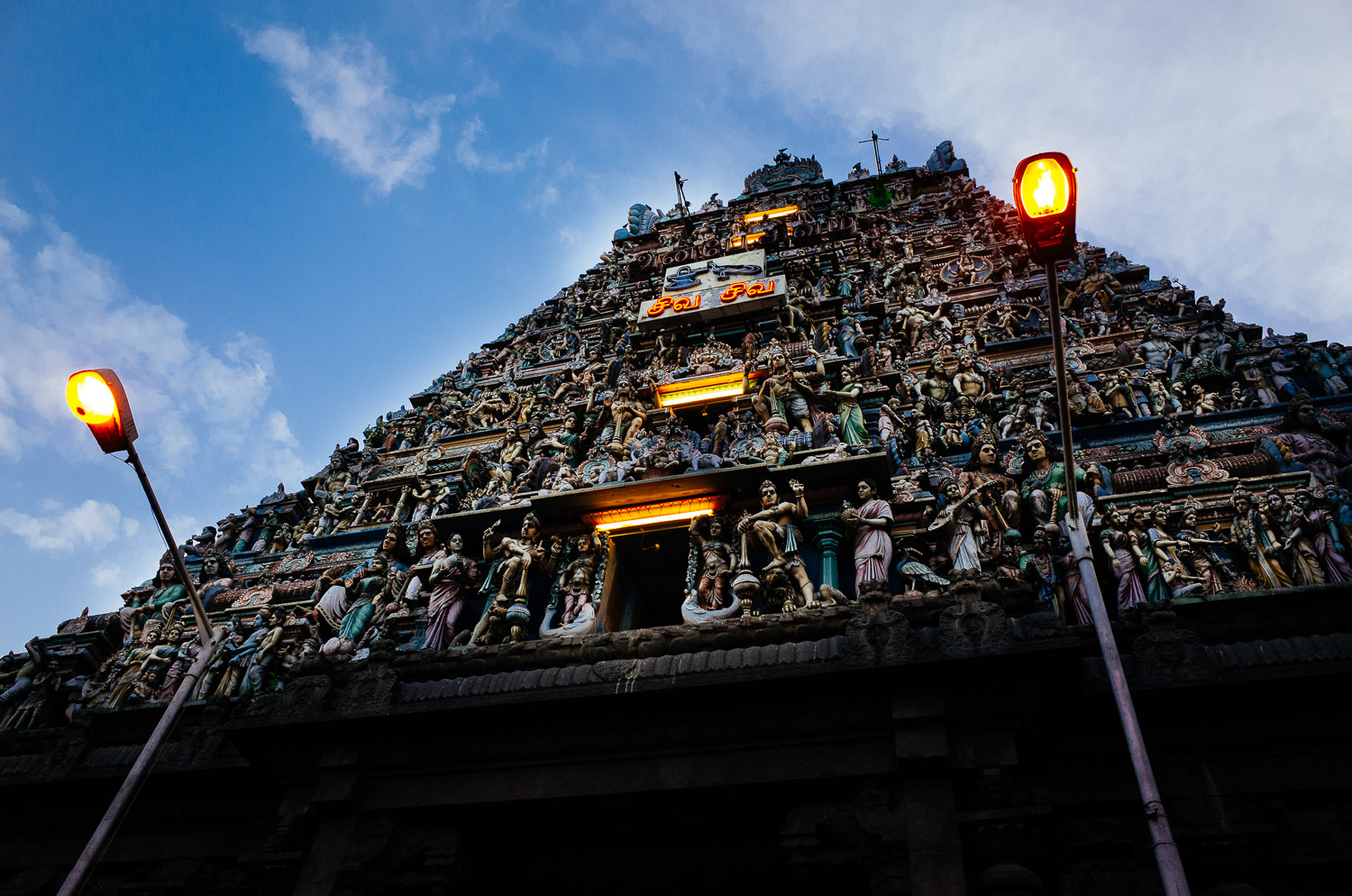 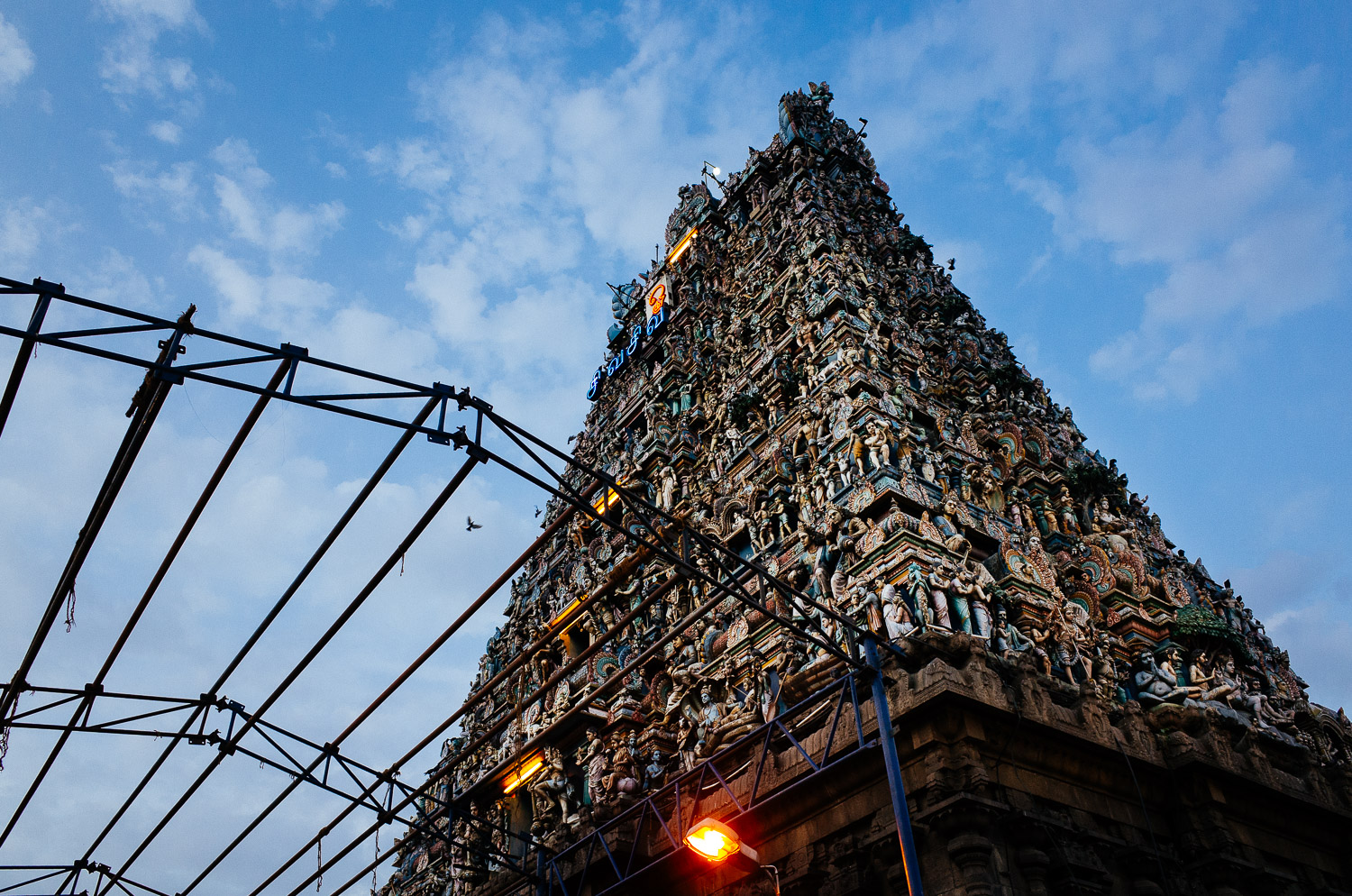 After I entered I switched to my Fuji XP1 and was asked to pay admission for my camera. The first time in my life. It was the same in Hyderabad a couple of days later where professional cameras and tripods were not allowed in the Chowmahalla Palace.

Thank God the XP1 isn’t a professional camera! And I’m very glad that I don’t need a tripod anymore most of the time. A tripod is nice if you are taking pictures of beautiful landscapes or seascapes on a lonely coast somewhere but it is useless here. There are far too many people. Spaces are tight and somebody would pump into you every second. And of course you would attract far more attention when shooting with a tripod. I’m not trying to tell you that I’m invisible just because I use a “stealth” camera. I’m the opposite. A tall white guy with a camera. If you don’t want to cause attention here you have to shoot with a smartphone and most of all you should be an Indian. 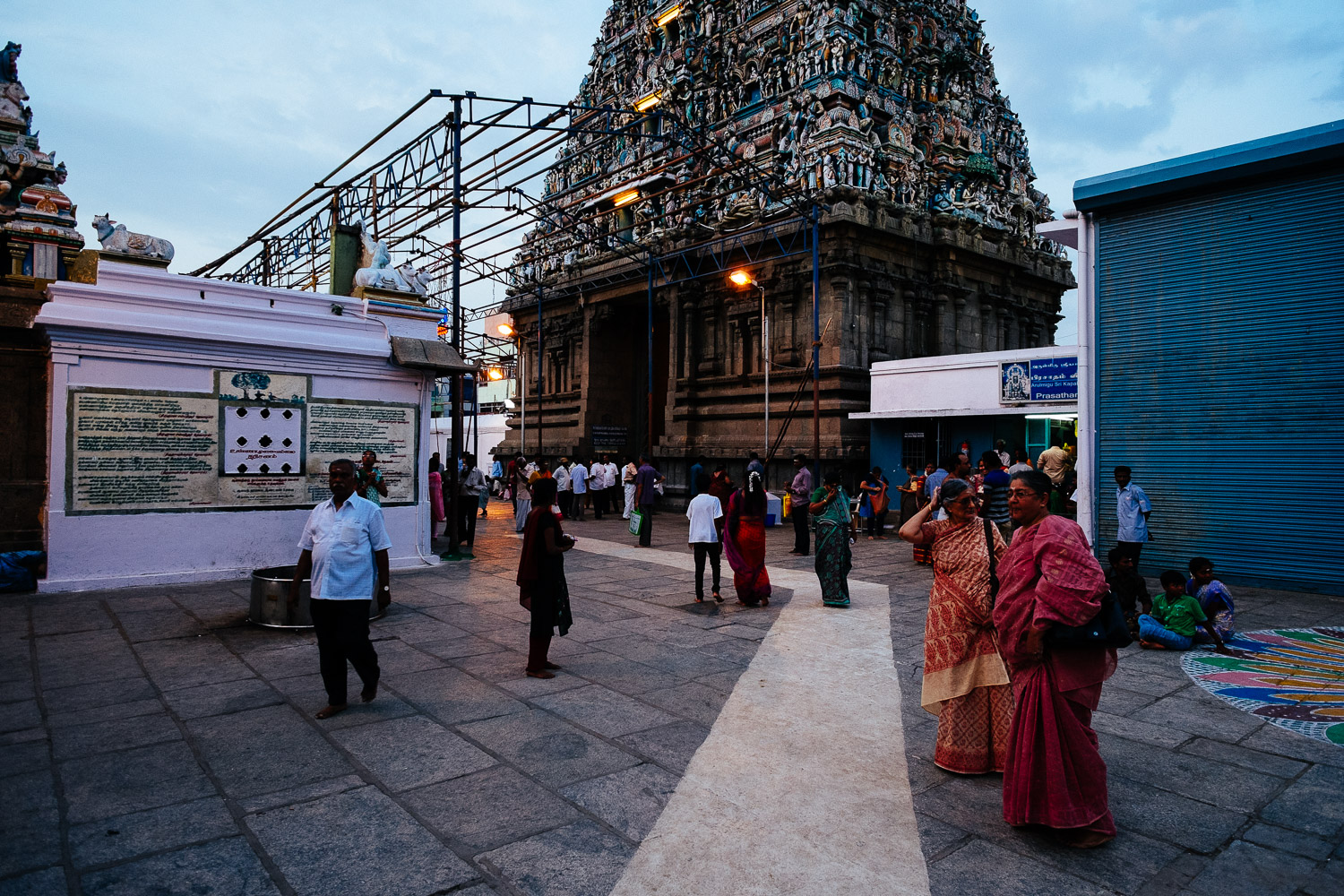 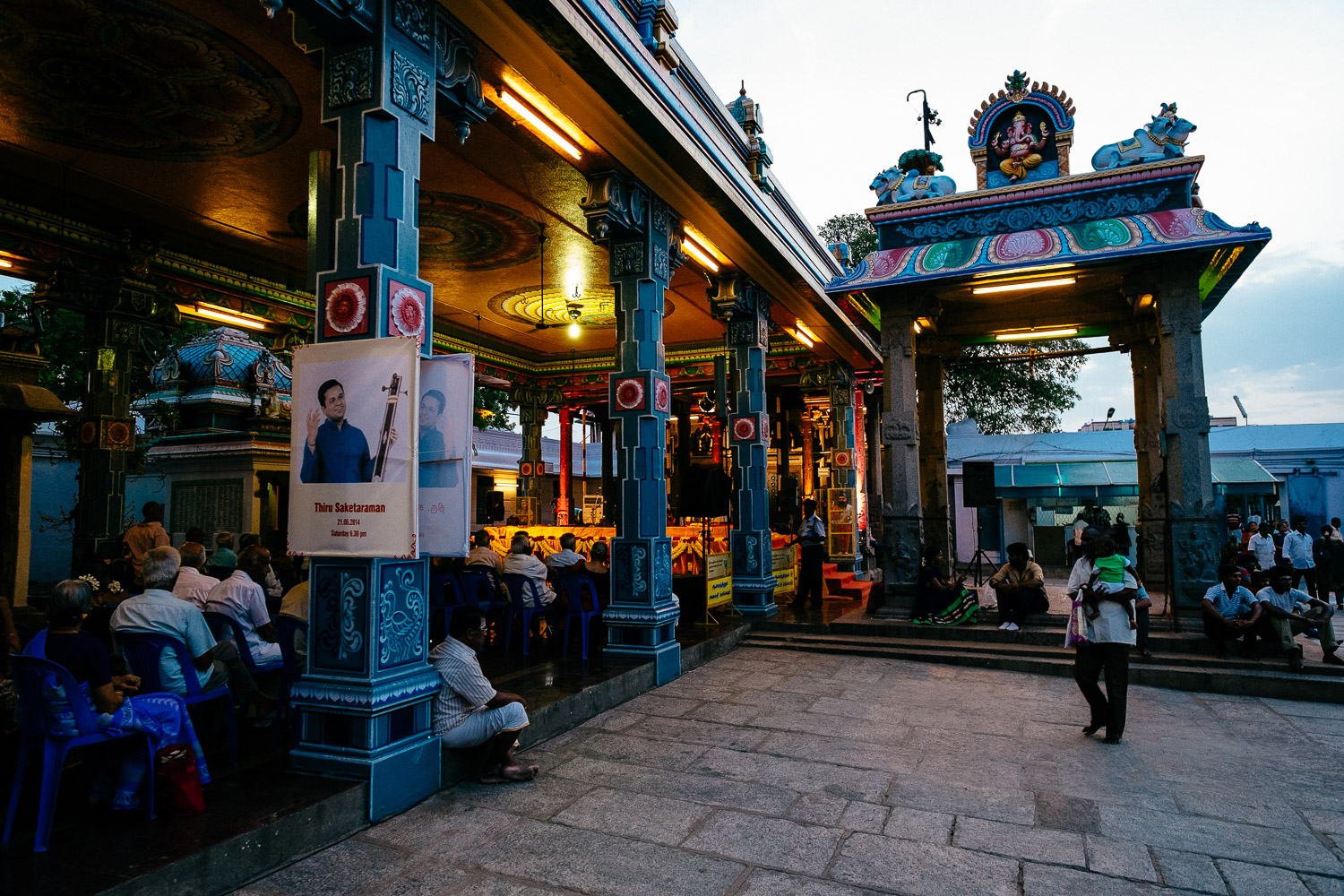 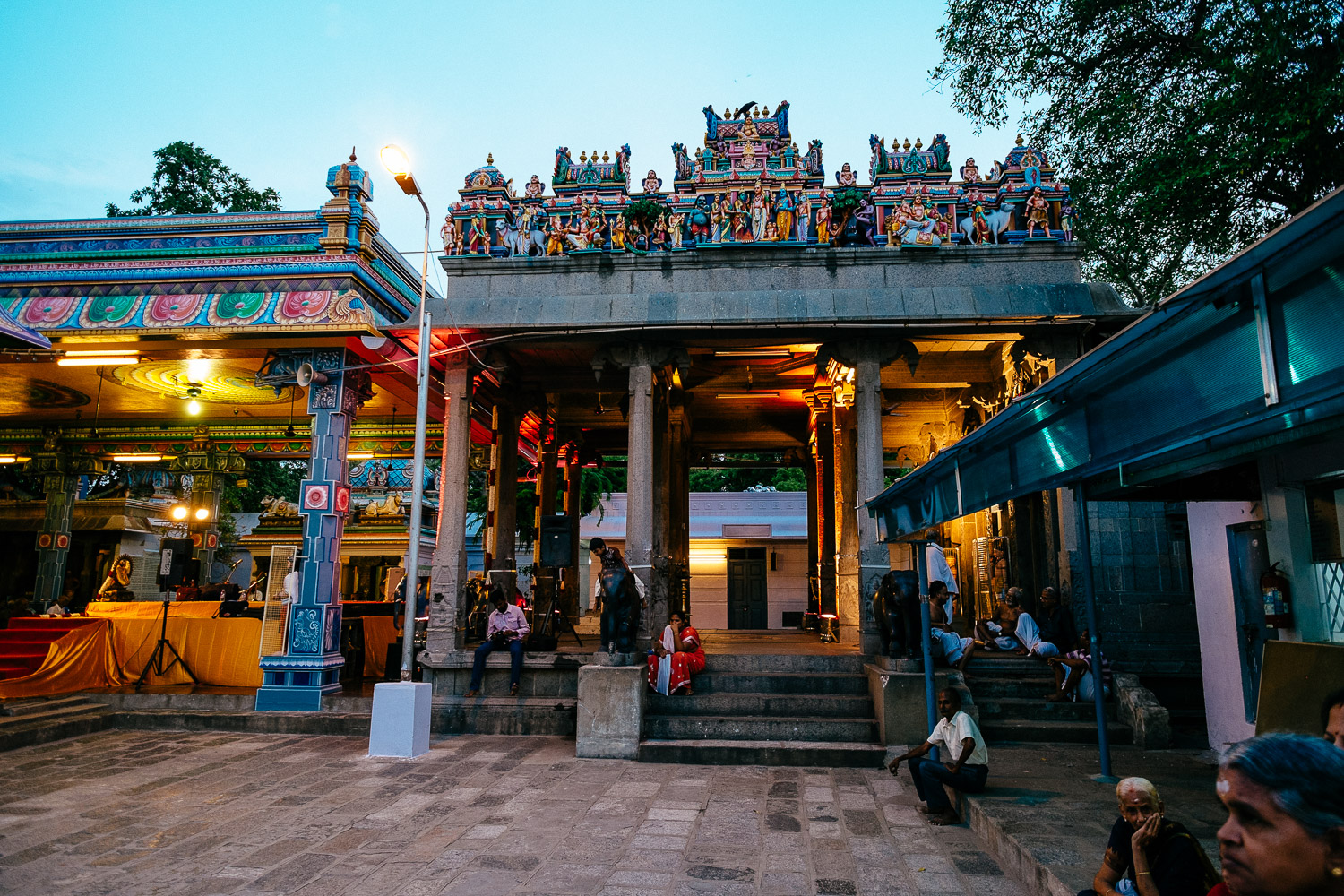 It was hot enough to fry eggs, not very comfortable if you don’t wear shoes. The local people didn’t seem to have any problems but my colleague and I stood on the heels to reduce the surfaces that touches the hot ground. A rather funny picture for sure: Two tall guys, one with camera, stepping from one heel to the other. Like penguins. 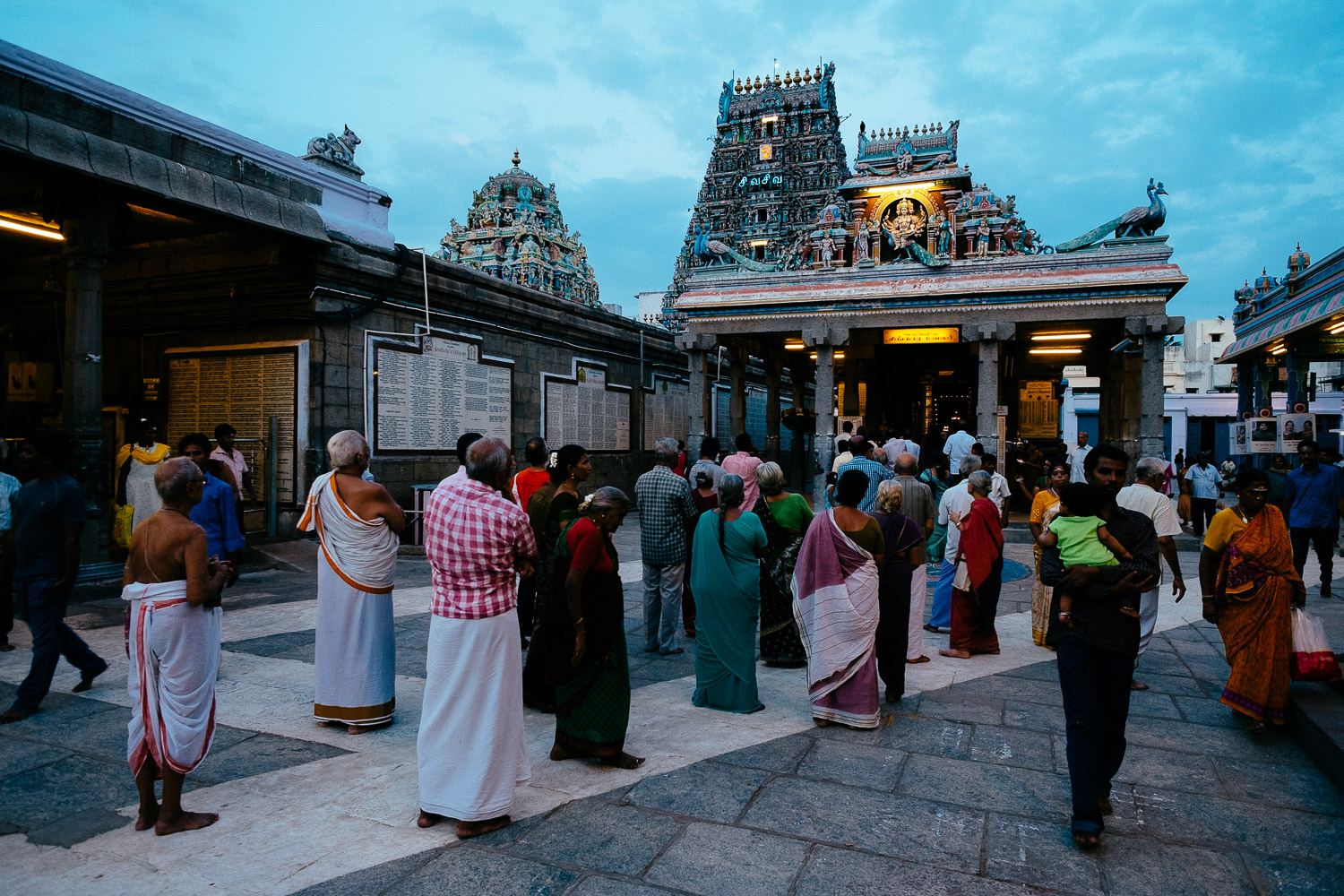 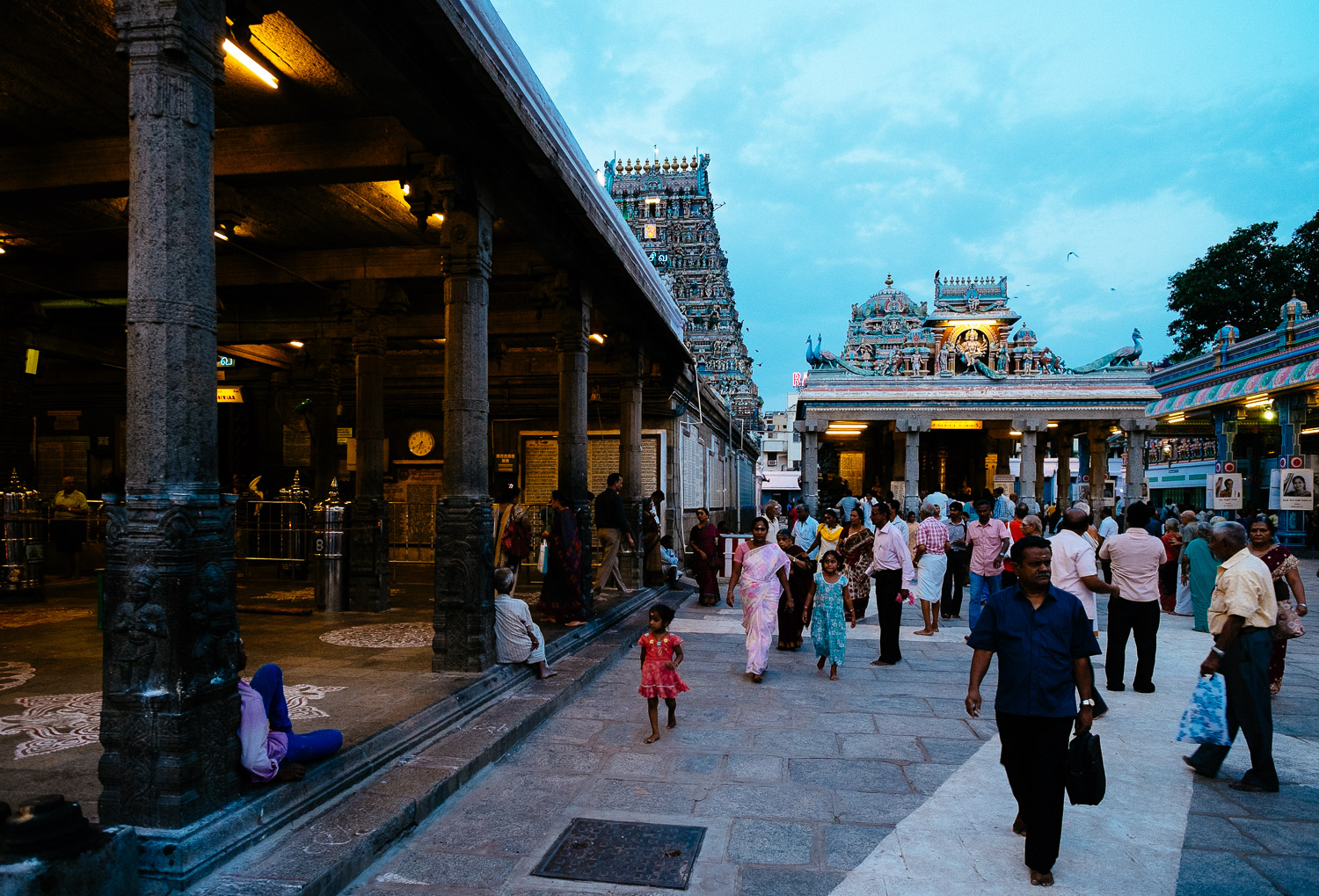 But I was very happy that I finally was out of the car and at a great location. I love Indian temples. I have been to a couple of them in Malaysia but this was my first Indian temple in India!

Maybe it’s just because of the season but there were no tourists or foreigners at all beside me and my colleague. Just local people who went there for their prayers. That’s the reason why I tried to keep some distance. I think it is very important to get close with a short lens but I think it is more important to show some respect. It wouldn’t be right to stick a camera in the faces of the people who come here for their prayers. 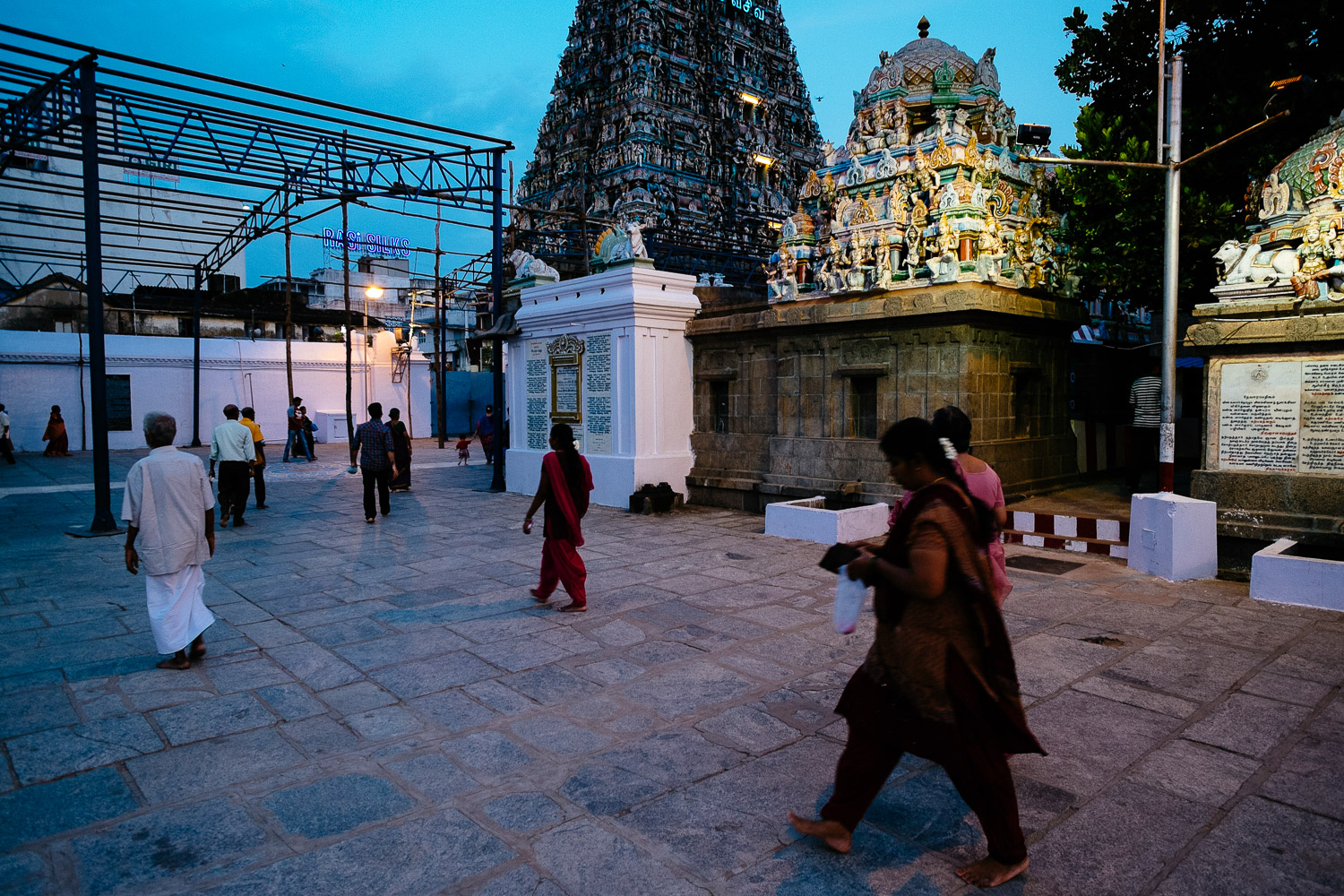 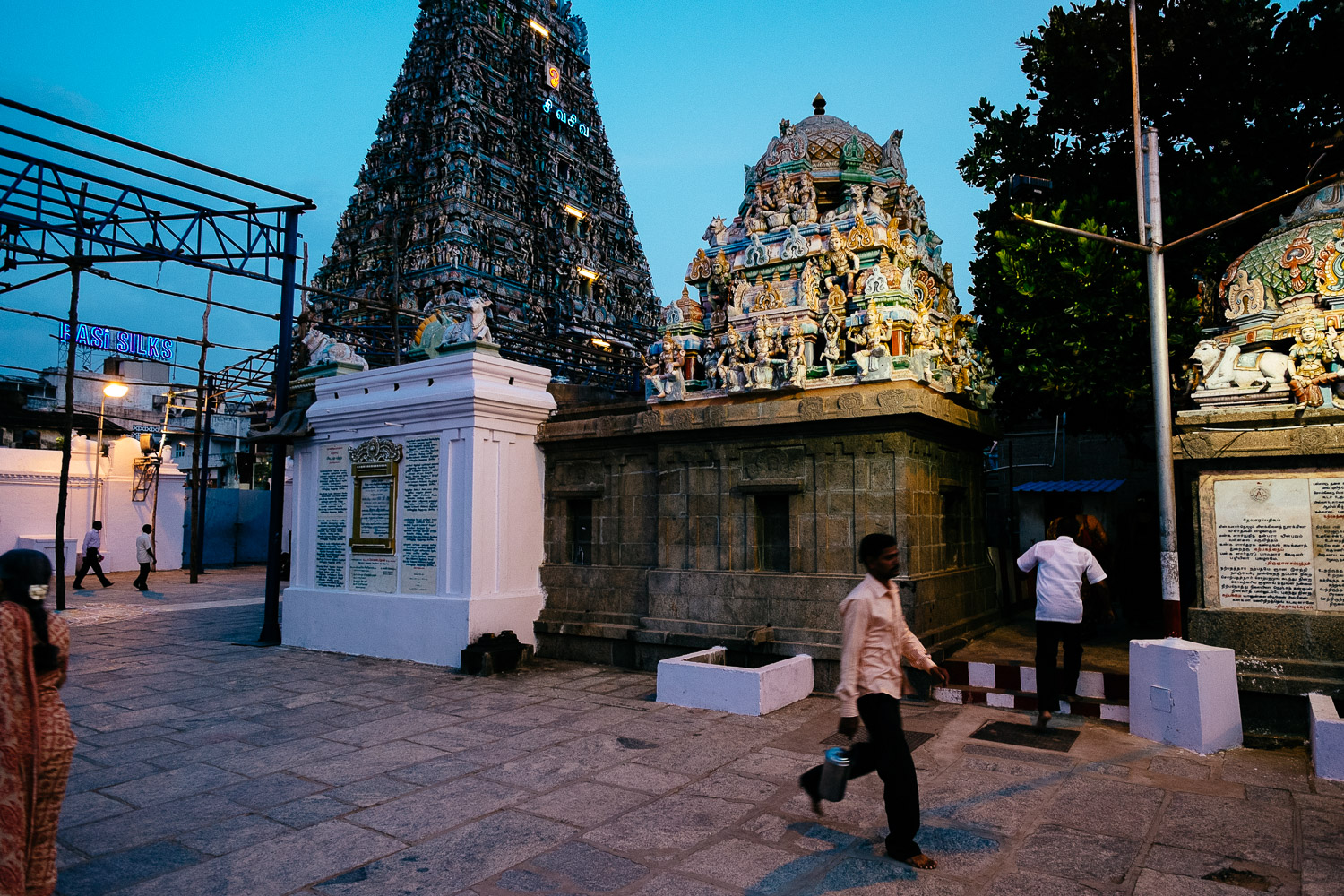 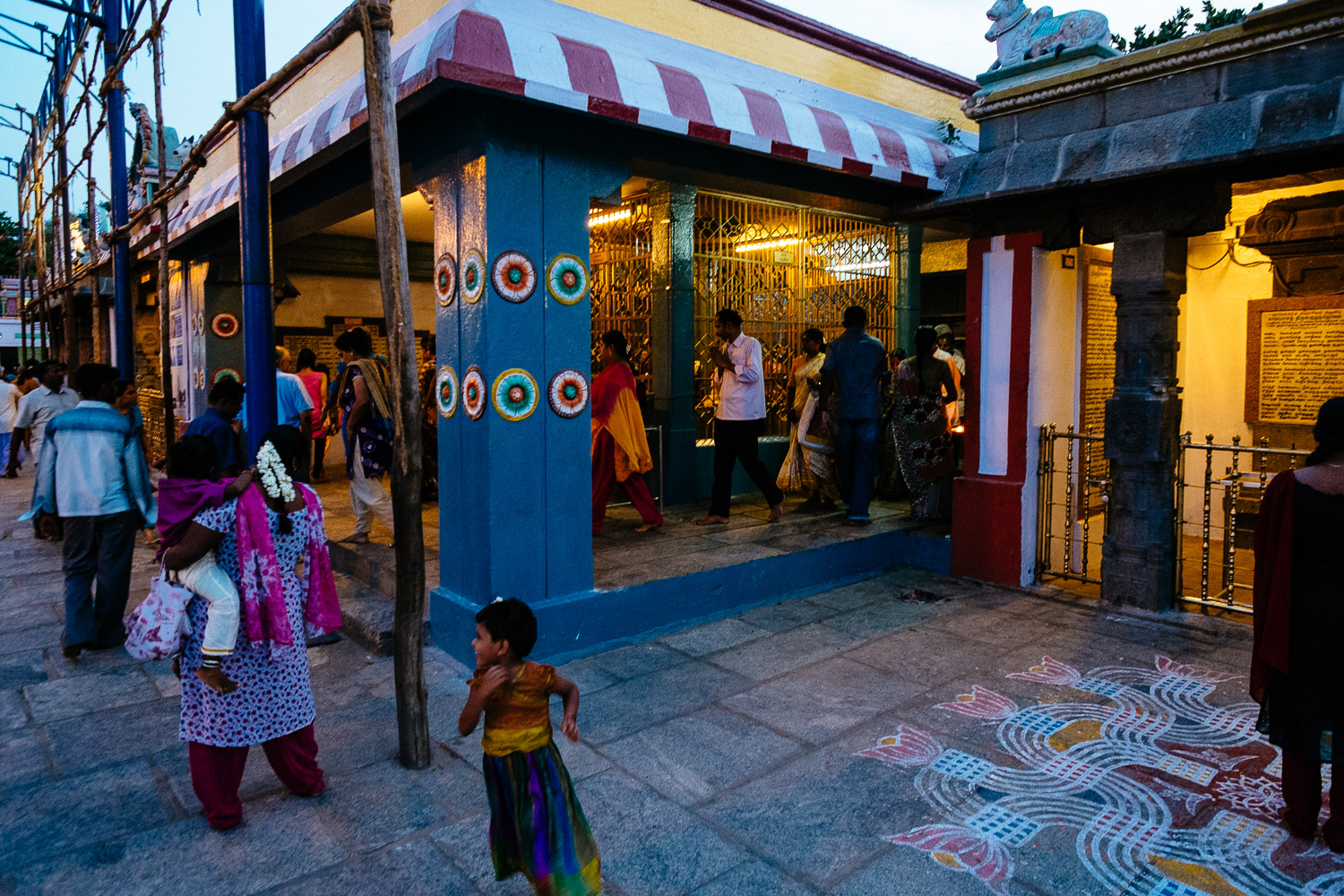 The light dropped quickly. It’s always like that close to the equator. To keep ISO values low I changed the slowest shutter speed to 1/60 in the Auto ISO menu. This was the most important firmware update Fuji ever performed for the XP1. I was whining a lot in my first look at the XP1 and also later during my first trips to Asia with this camera but now it works like it should have worked from the start.

I prefer 1/60s to the 1/30s that the XP1 would choose when the 14mm lens is attached. The faster shutter speeds helps to prevent camera shake but most of all also helps to freeze the motion of your subject. It was almost fast enough to freeze the motion of the little girl running around her mother in the image above. 1/30s would have been definitely too long to get the shot. Thank you Fuji for giving this firmware update to the X-Pro1. But Fuji even updated the firmware of the X100 when its successor the X100S was already available. This is how customers should be treated. Maybe Fuji misses some sales because the old model performs almost as good as the new one after the firmware update but they win a loyal customer base on the long run.

As much as I would like to have the great viewfinder of the X-T1 and its swivel screen but it is not enough to make me feel that I need to upgrade. I’m gonna wait for the next generation of sensors. 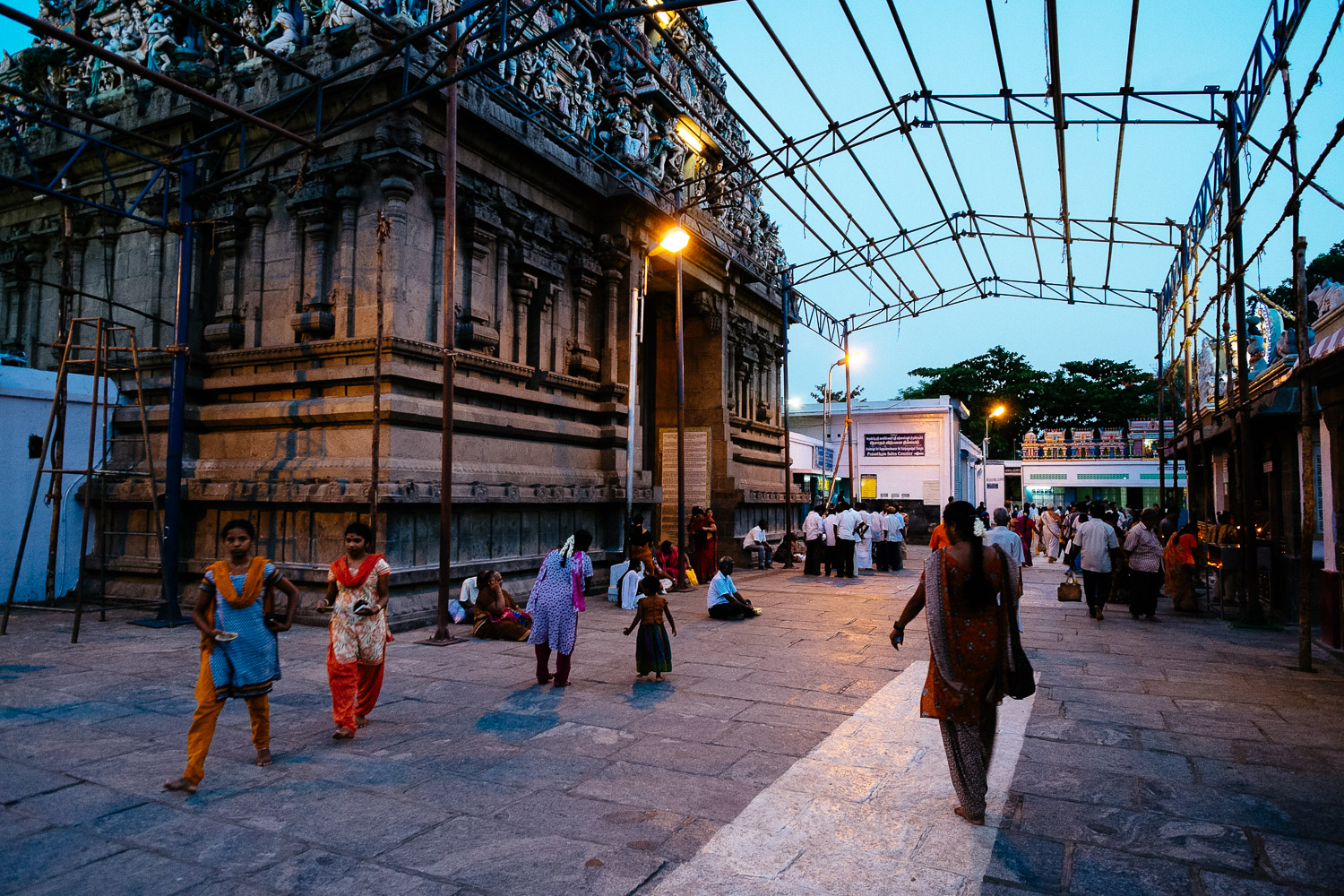