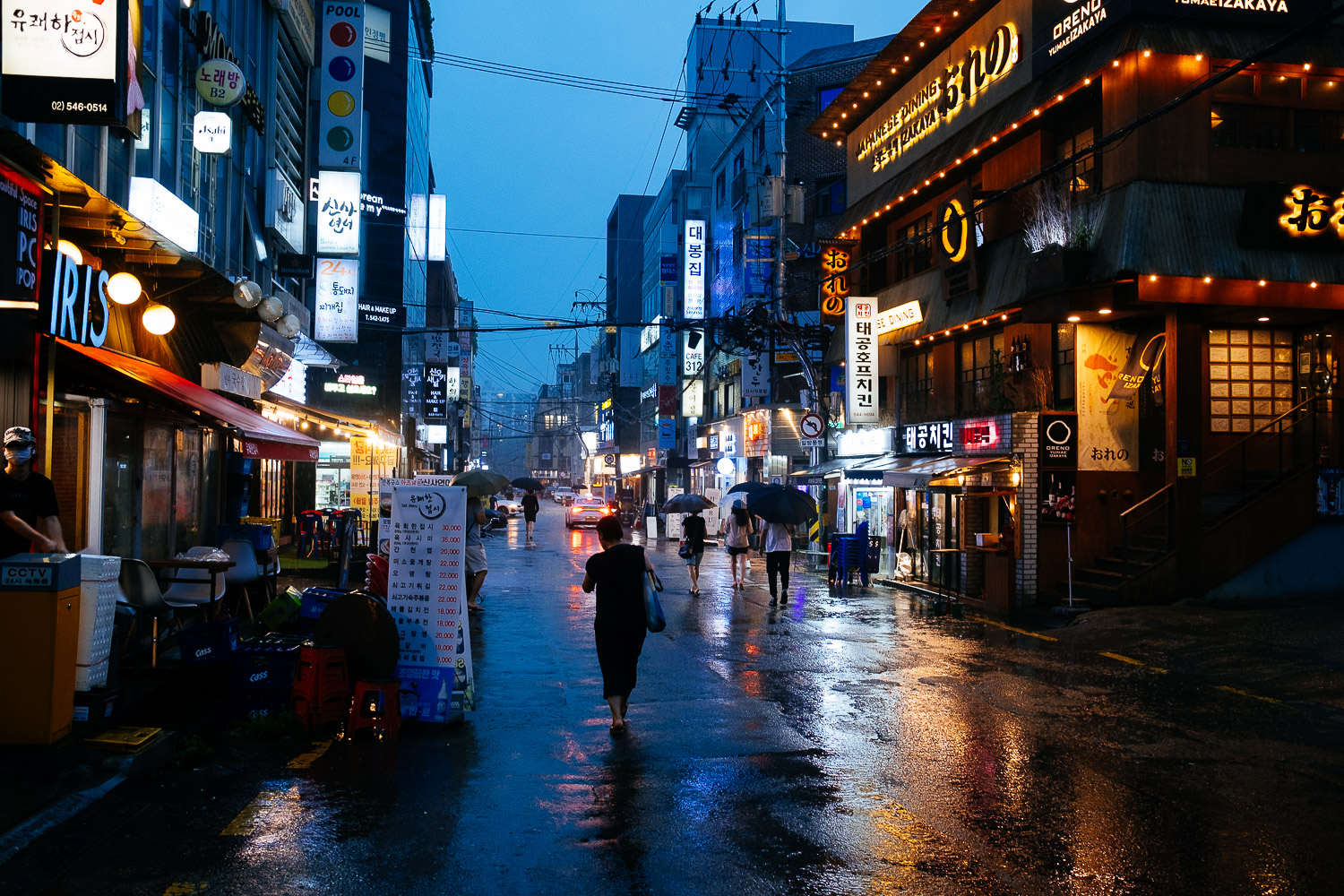 I have experienced a lot of rain, including very heavy rain but I never saw something like this. August 8th 2022 in Seoul, Korea. The day of the big rain.

When I finally got an email that confirmed that I was Corona negative I went for a walk. I just landed a couple of hours before after a long flight. The weather was hot and humid like it always is around this time of the year. For the first time I took a small compact umbrella with me on a business trip. It was no real match for the rain. 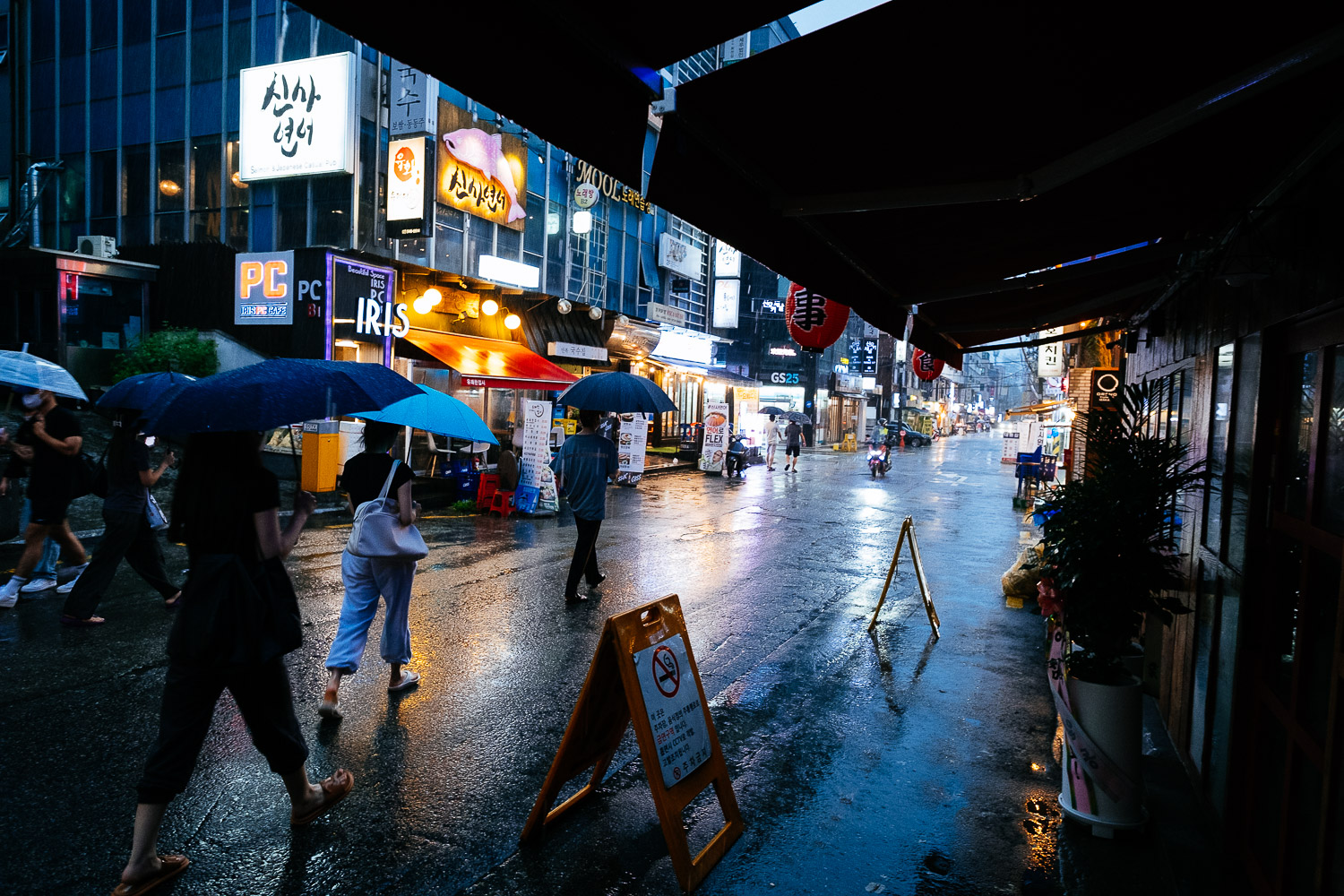 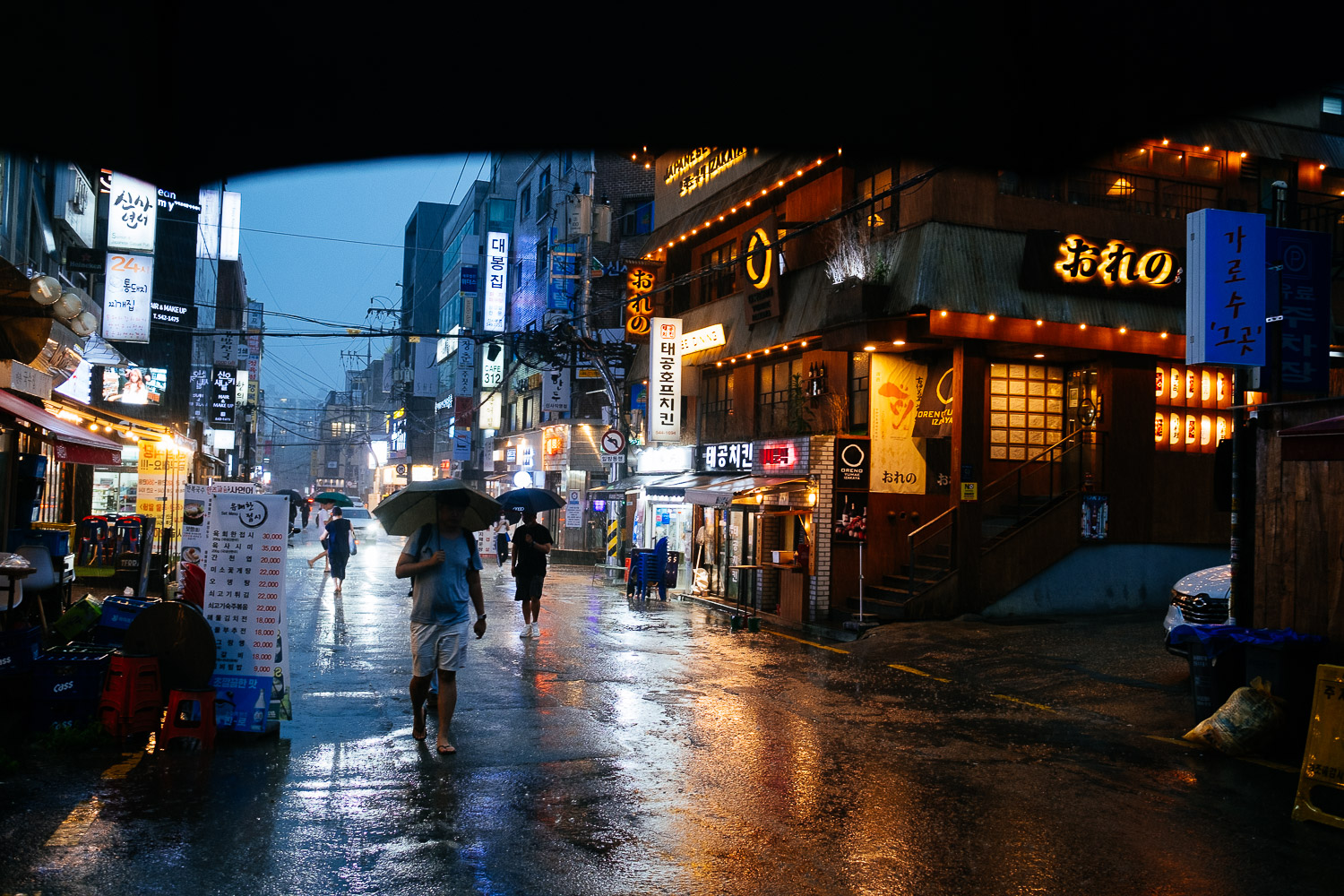 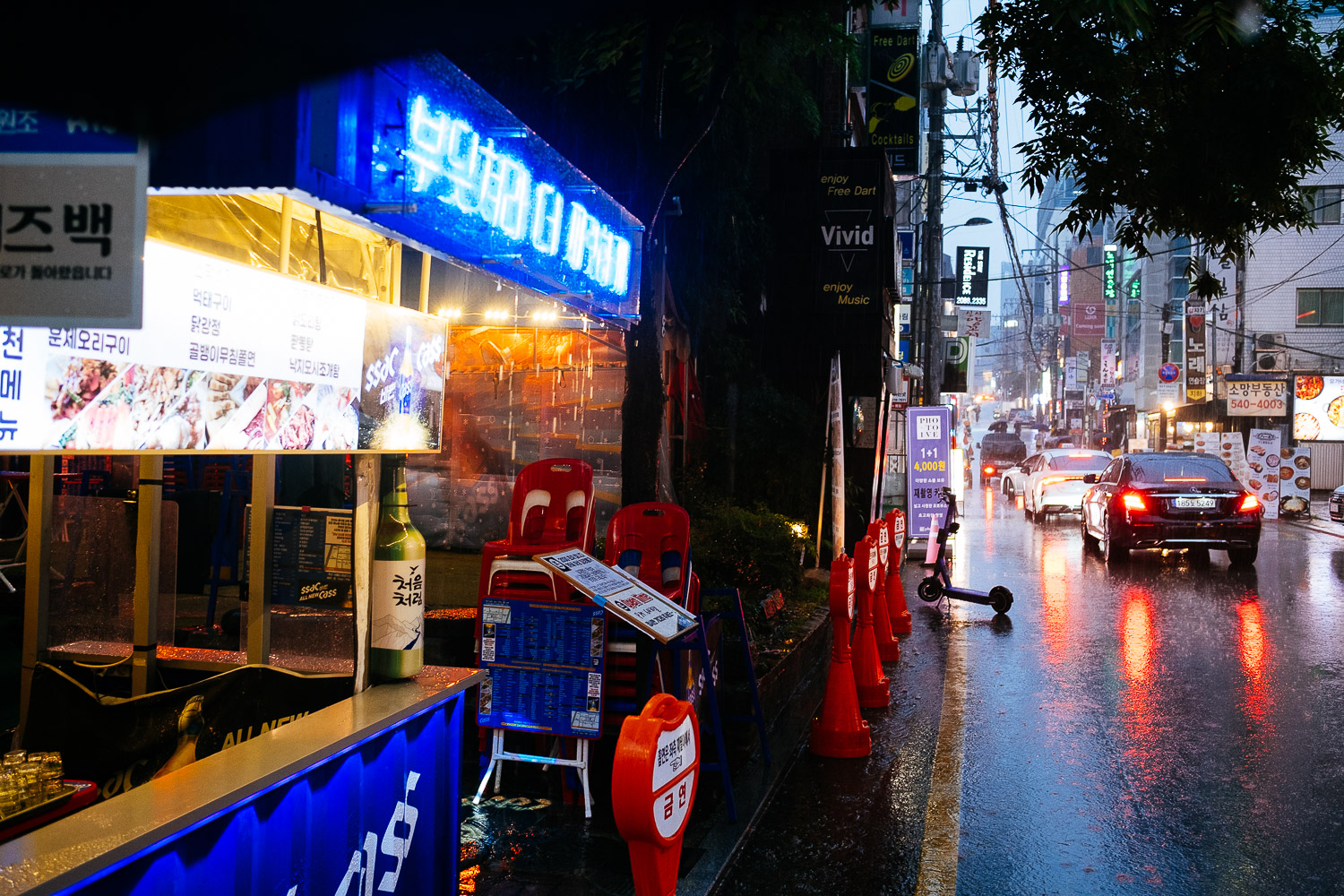 When I started my walk it was only a light drizzle but it developed into heavy rain pretty quickly. At one point I was seeking shelter in a shop but since the rain didn’t stop I decided to pack my camera away and run back to my hotel. When I finally arrived the only thing on my body that wasn’t wet were my hair. The rest looked like I jumped into a pool. The worst were my running shoes. The water went right through them. I saw many people in crogs, flip flops or even barefoot. I went back to the hotel early because I had a video meeting to attend.

I have seen very heavy rain in Malaysia and Indonesia and extreme rain in India during a thunderstorm but this one was still different. Luckily South Korea is a highly developed country so “only” 8 people died that day. Sadly some of them died in one of those semi-basement flats from the movie “Parasite”. Seoul is highly developed but there are still many people who have to live in such places. Today they still account for 5% of all households in Seoul. But it seems that the government wants to put this to an end.

Because of the deaths of the poor people in those flats there will be no more permits to use those in the future. Those flats have to be converted into parking lots or storage areas.  This decision happened only 3 days after the flooding. An impressive step in the right direction. 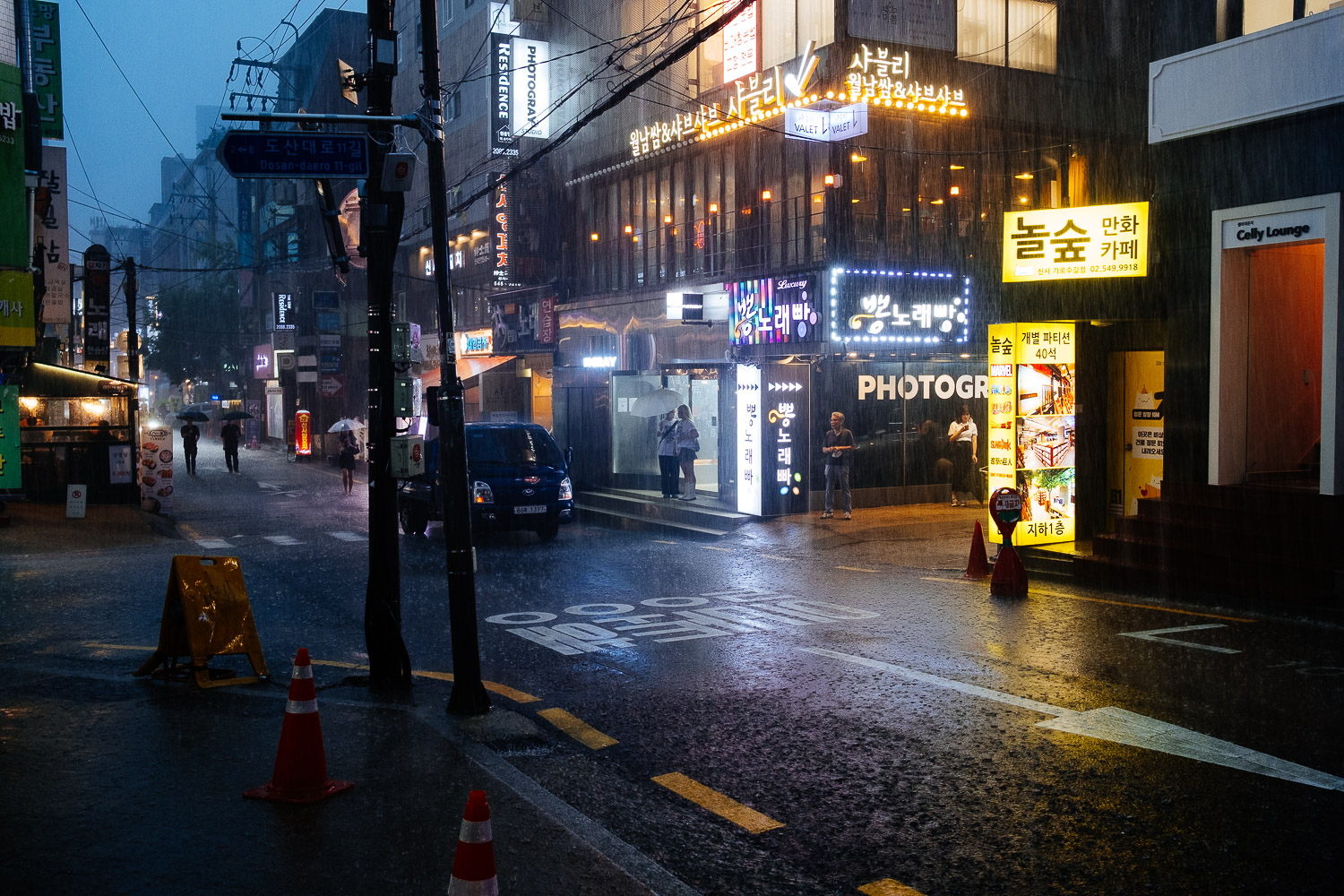 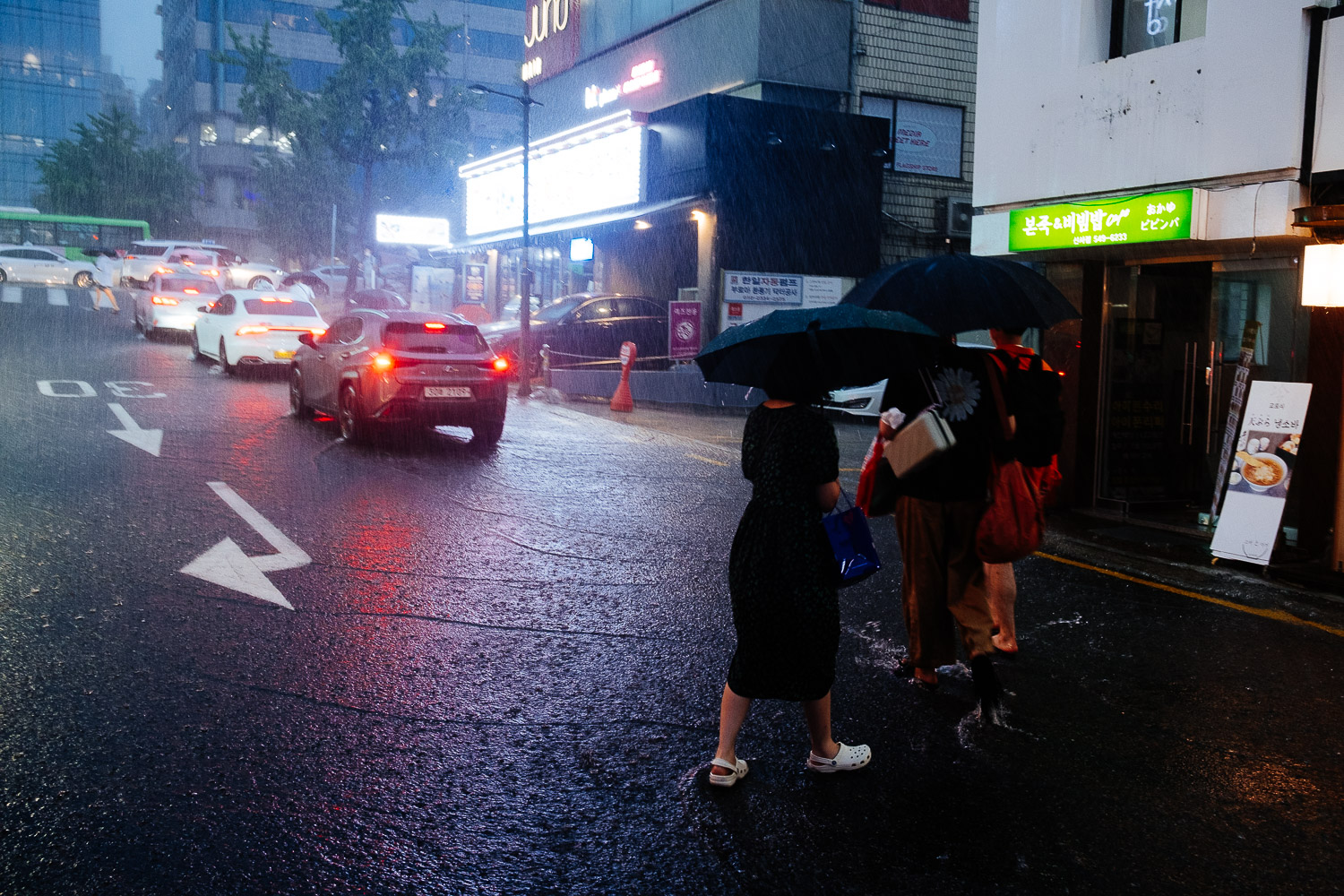 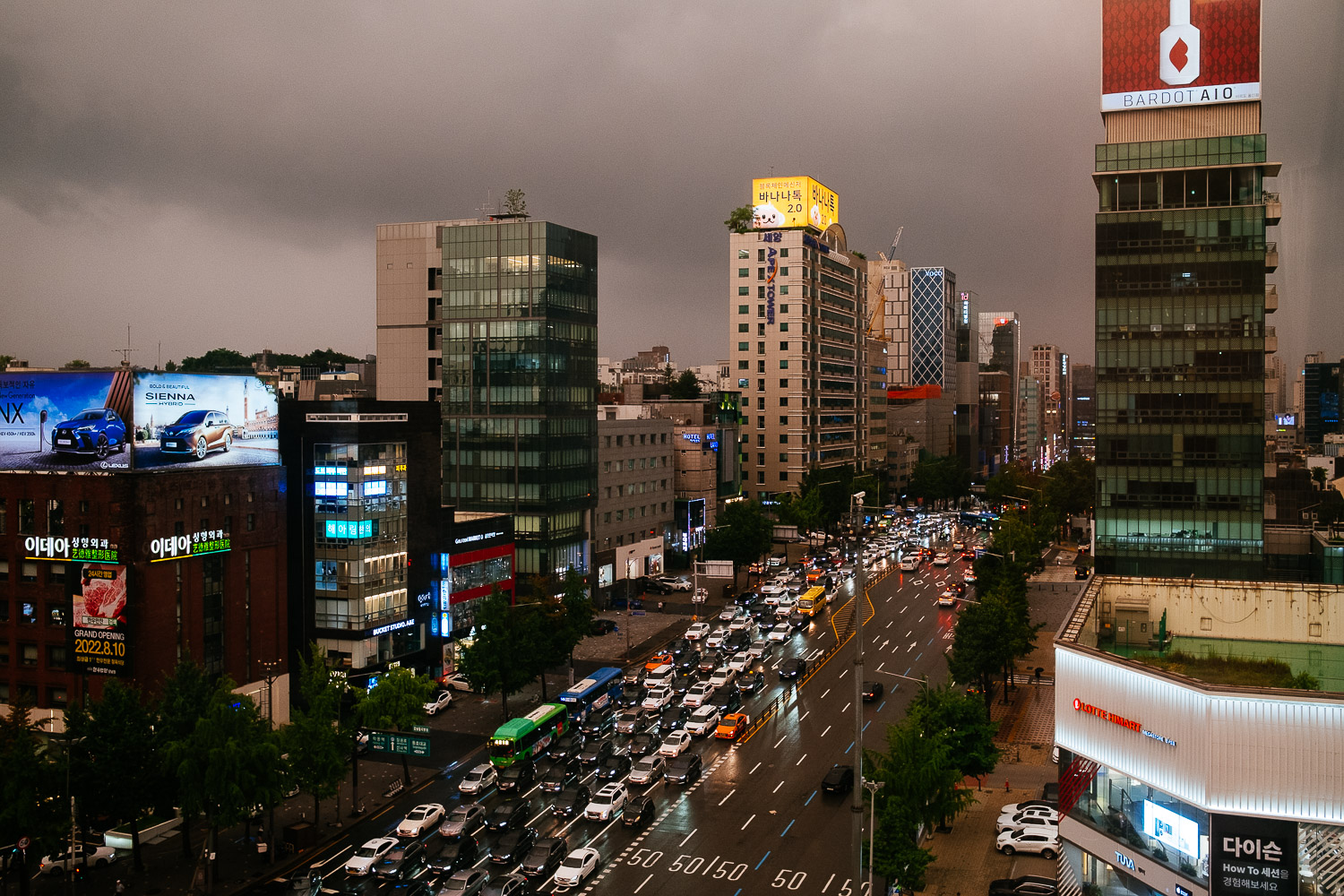 The last ray of sunshine in the last image was taken two days later when the rain finally stopped. In total it rained more than 500 litres per sqm in two days. A very strange start to a business trip that also provided me with a real bad surprise. Four days into the trip I got sick. Corona. Finally. I have avoided Covid-19 until now but here the virus finally got me.

This was my worst case scenario. To get Corona abroad and far away from home. And it literally doesn’t get any farther away from home than South Korea. I had to change my hotel for a quarantine hotel in order to isolate for 7 days. The room was spacious but the window was extremely small. It felt like a prison. Luckily I’m out of it already but those were tough days.

But like the sunshine after rain you can appreciate the simple things in life much more if they have been taken away from you for some time. Like having a real breakfast, dine out, having a laundry service or simply to stay in a room with a window so that you can tell if it is day or night. Thanks to the catastrophic rainfall last week those semi-basement apartments will be a thing of the past soon and that’s good. Everyone deserves to live in a place with a window.