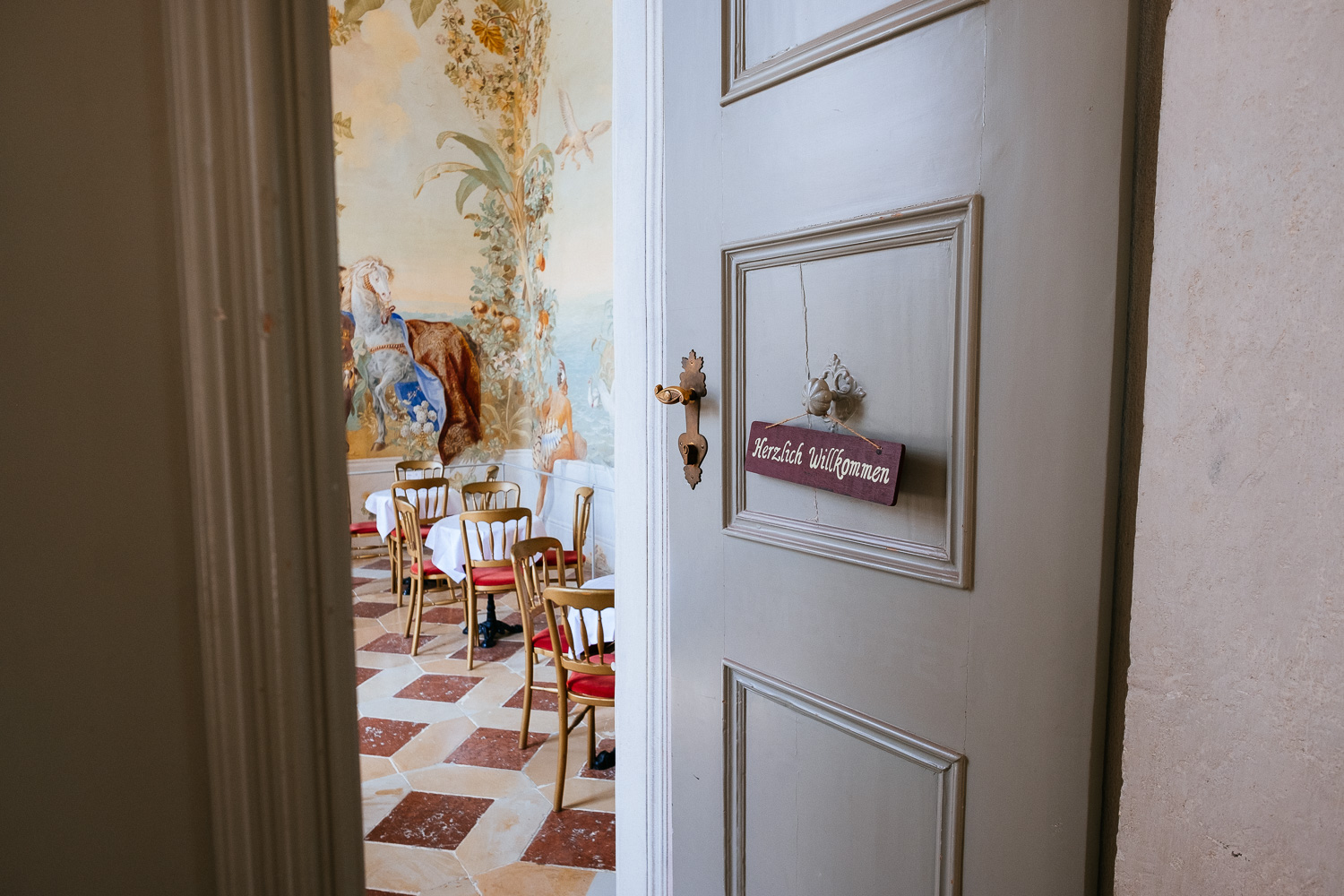 I travel far on a regular base. For business and for my vacations. But sometimes exotic things can be found just around the corner.

Like in this case. I have been to Melk Abbey countless times. It is a massive baroque Benedictine Monastery. I have taken hundreds of images from the river side or inside and also from its library but I just recently discovered the small garden pavilion just outside the main building complex. 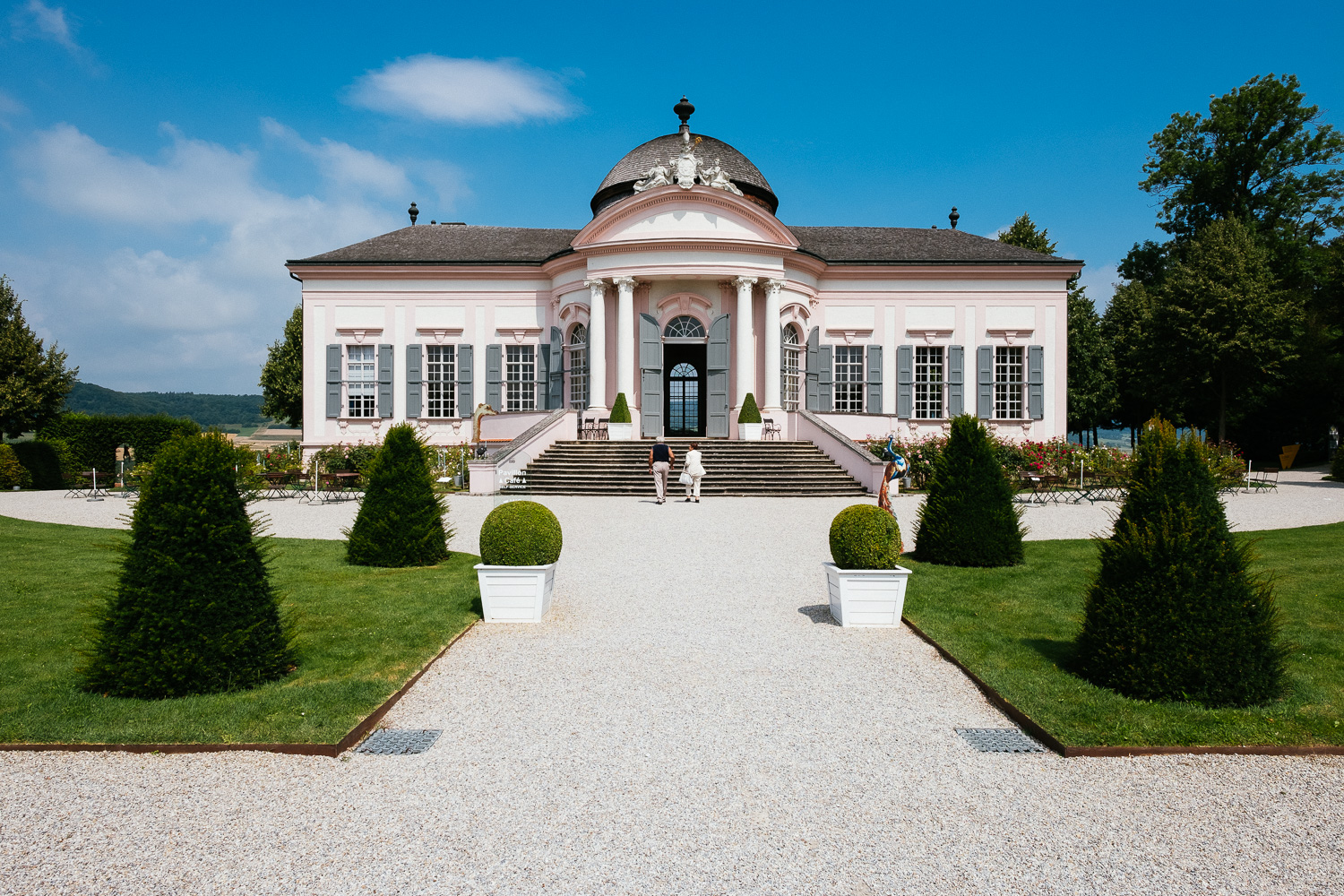 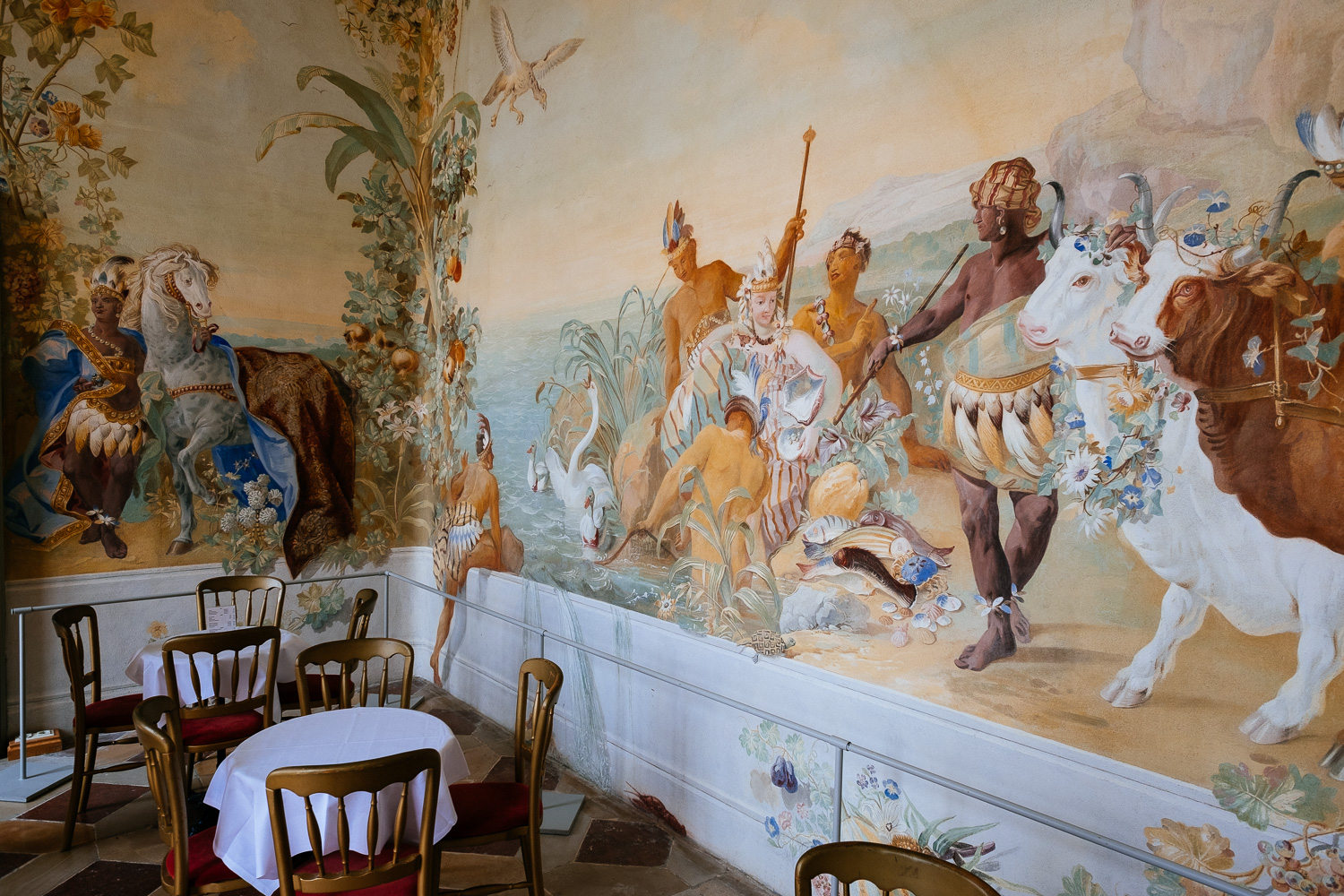 Last weekend we went to Melk but the visitor parking lot was full of cars and tour buses so we decided to go to the town instead. Eventually we walked up to the abbey and visited the garden instead of the main building. The garden is nice but the highlight for me is the pavilion or better its frescoes from Johann W. Bergl.

His wall paintings show exotic places all around the world. It reminded me of one of my favorite books when I was a little boy. “Hatschi Bratschi’s Luftballon”. A book written in 1904 full of witches, cannibals and child eating wizards. Just the kind of stuff you need to teach your kids some manners. 😉

I was raised in the 70s. The book was still there though altered, less xenophobic and racist. It was still meant to teach you to listen to your parents otherwise you will get into trouble. But the thing is: Every single adventure in the book has a happy ending. At the end the little boy that did not listen to his mother sees exotic places and finally returns back home as a hero. Of course the book is controversial but for me it was just great. It planted that desire to travel and to see foreign places. 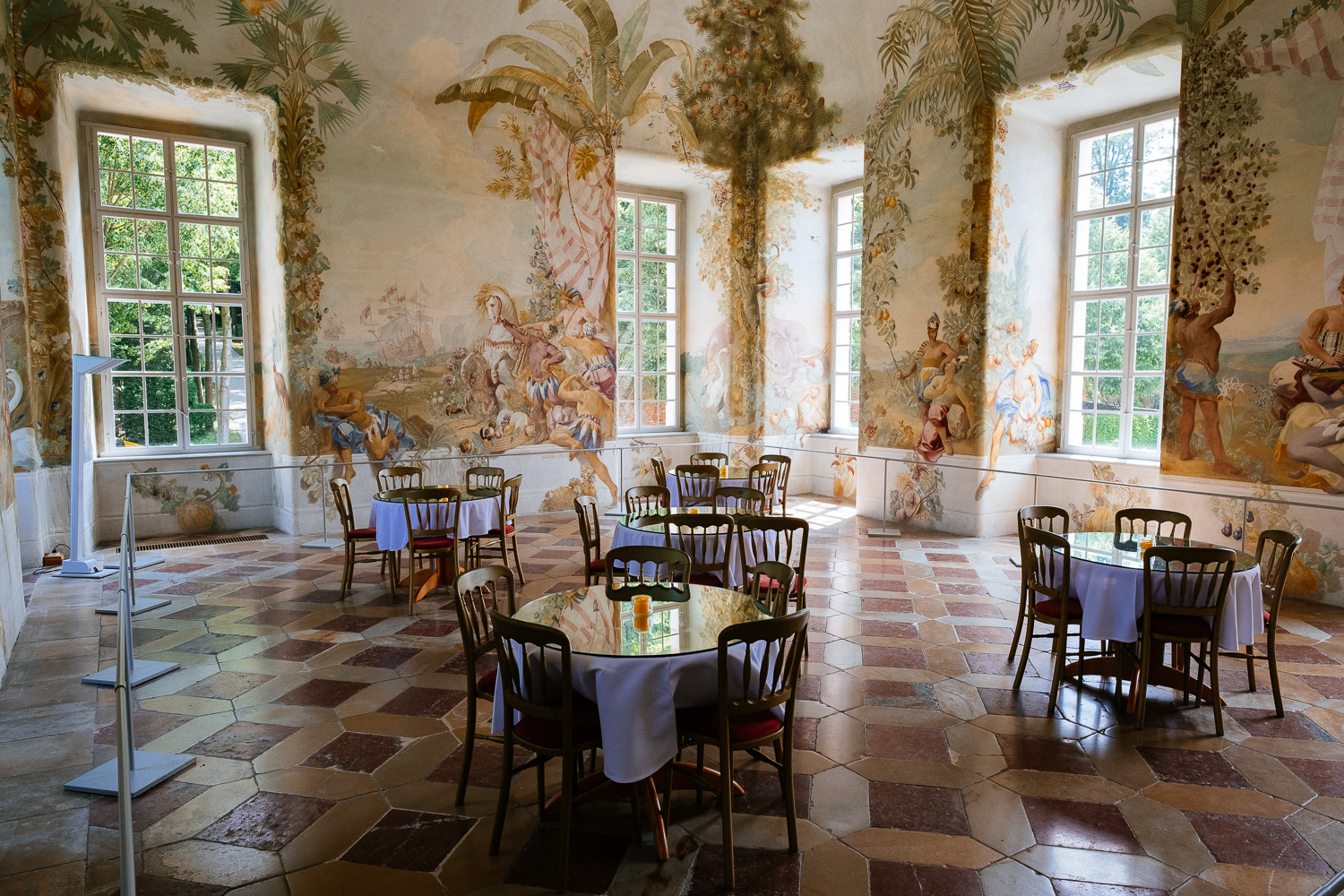 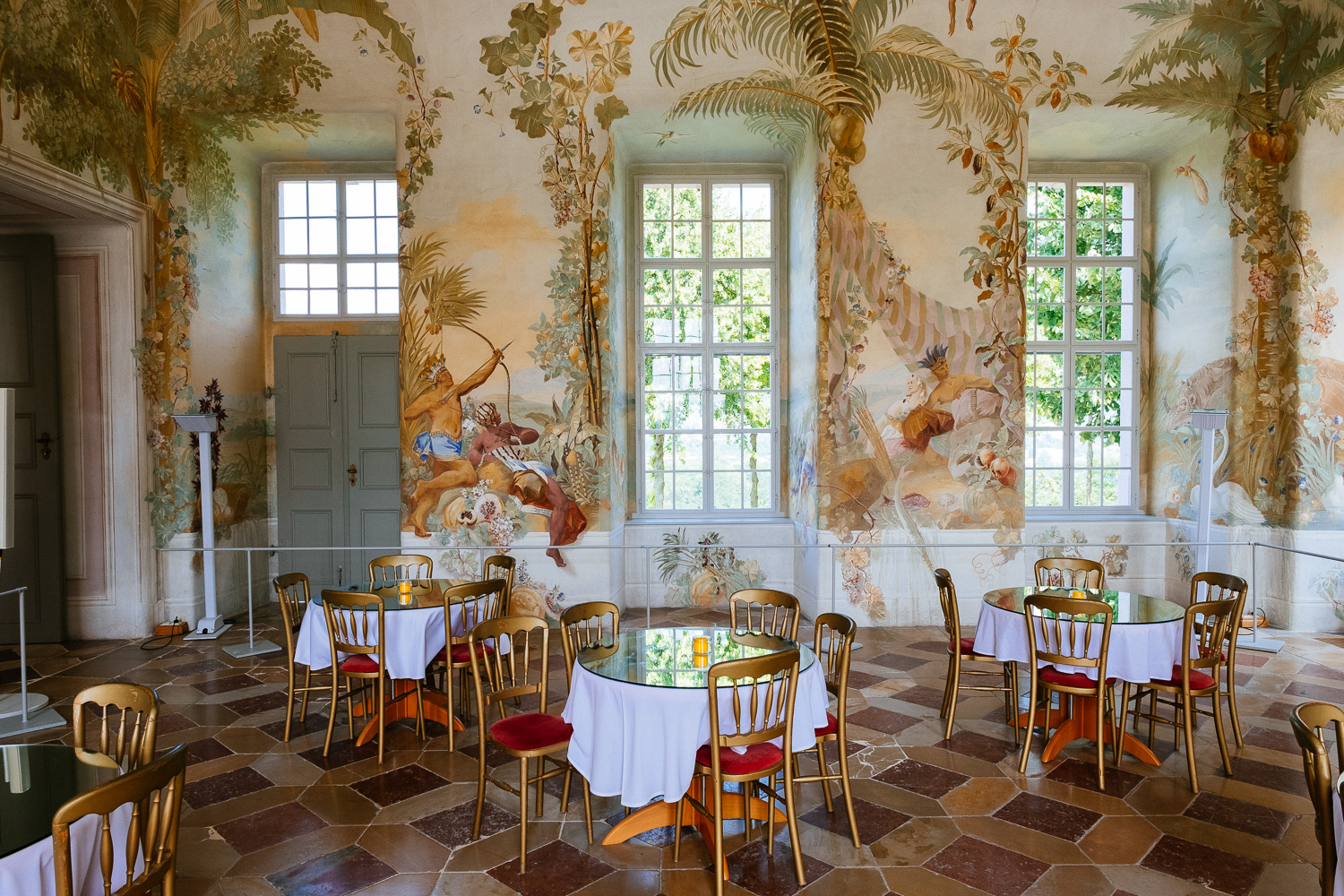 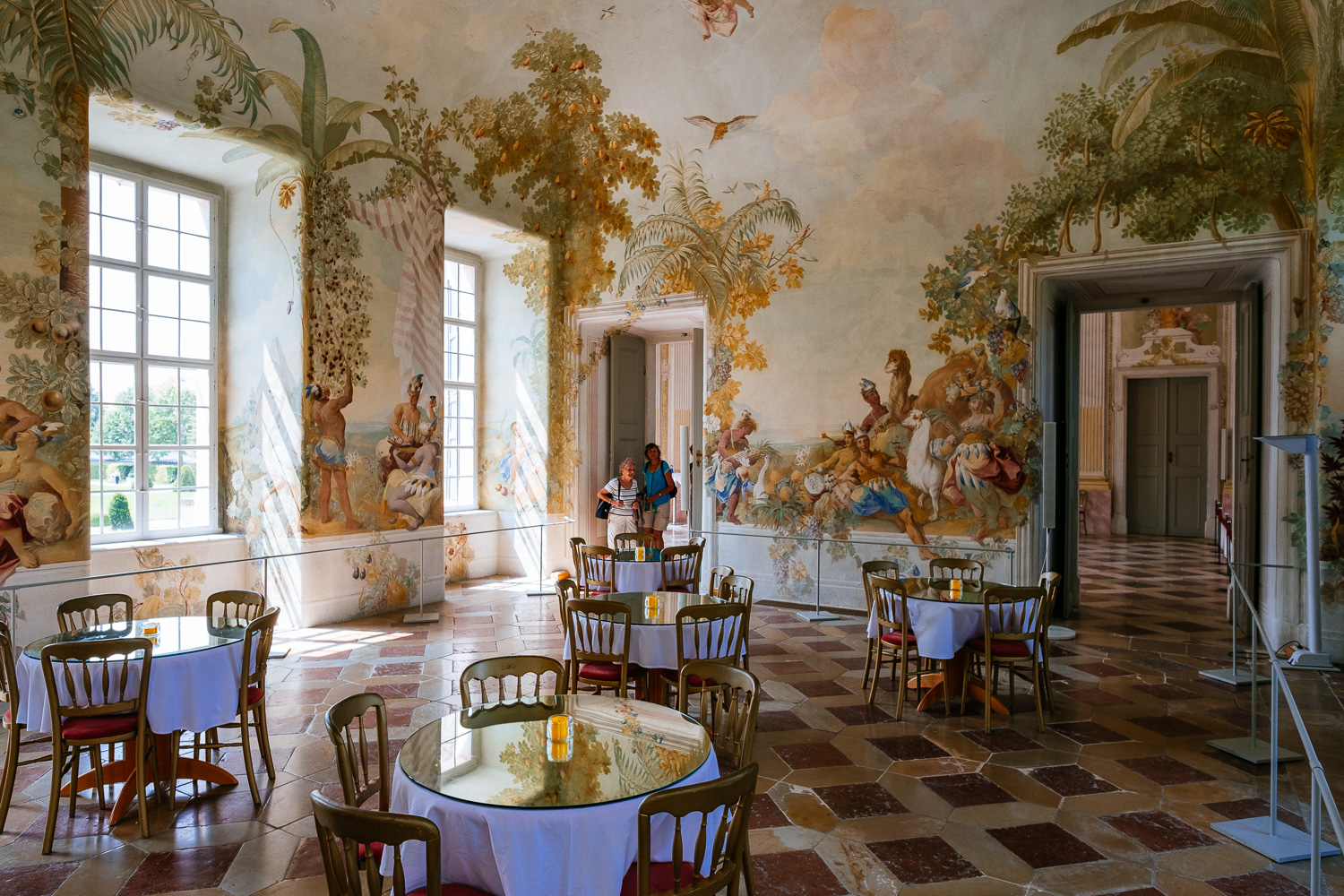 There is a small coffee house in one part of the building but it is self service and that’s why all the tables in this part are empty which only adds to the atmosphere.

That day I only brought my Asia business trips outfit: X Pro-2, 14mm and 27mm pancake. A super small and light but surprisingly versatile set. Of course the 16mm plus 23mm would also be an option but for me there are three reasons to prefer the 14/27 if the focus is on street and architecture.

I love the 16mm and the 23mm especially since I changed the lens hoods from the super ugly versions that come with the lenses to the beautiful, rectangular metal hoods. Those are also much smaller and make the lenses fit better into small camera bags. But when I shoot those lenses I can’t help to think that I bought into mirrorless to have a smaller and lighter camera but especially the X Pro-2 with the 16mm is anything but small and light. It is still my number one setup for social photography or sightseeing with friends or food photography or everything where I want to play with the depth of field.

The 14/27 combo on the other hand is small and versatile. I think both lenses together are about the same weight than the 18-55 kit lens but the picture you can take with it are much better thanks to the 14mm. There is no way that you can take those interior shots with the kit lens. If you don’t want to leave the kit lens at home I recommend to swap the 27mm for the kit lens. The 14mm plus the 18-55 is a very nice combo too and both lenses share the same lens cap and hood. If you like to keep things small and simple this is maybe all the kit you need. 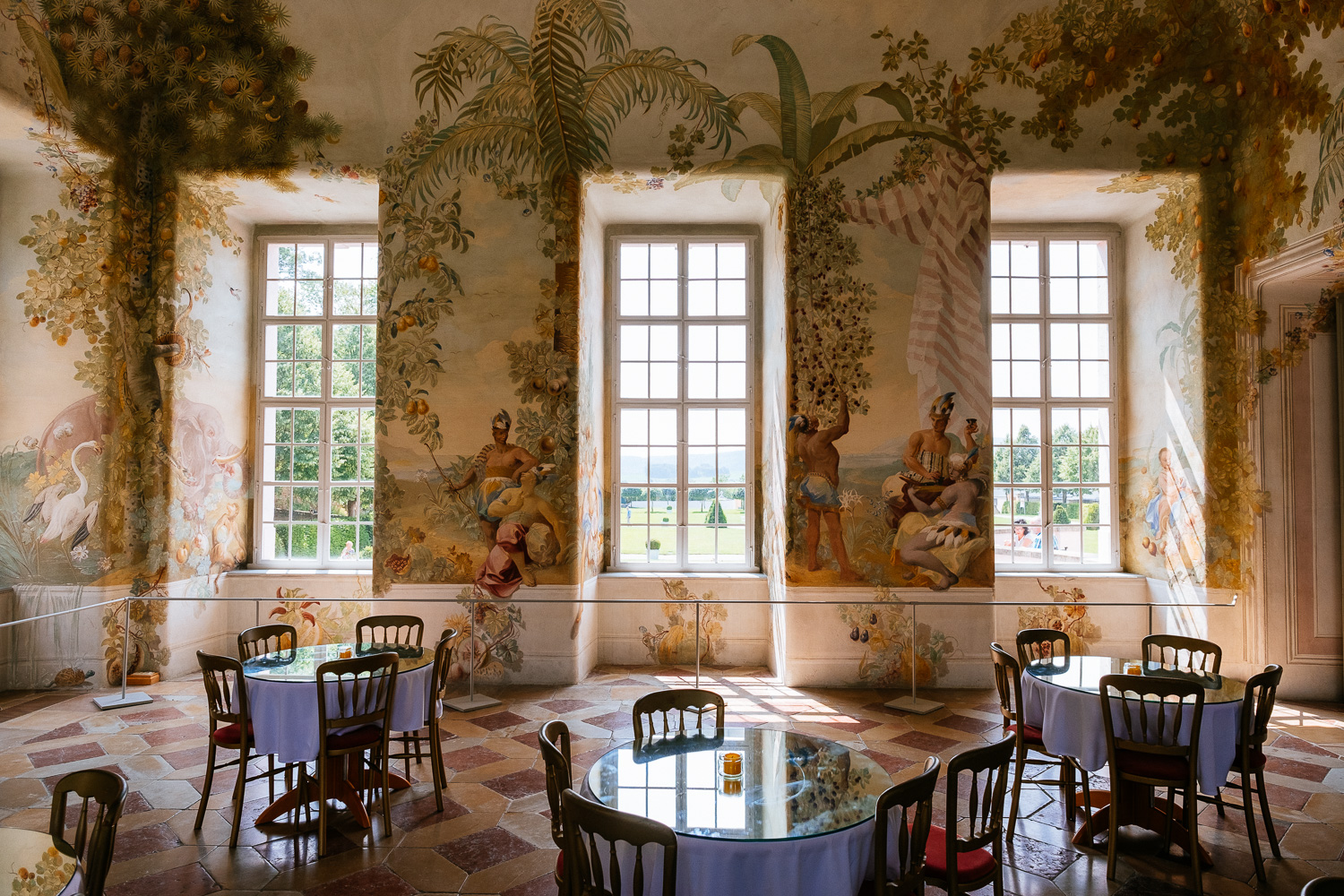 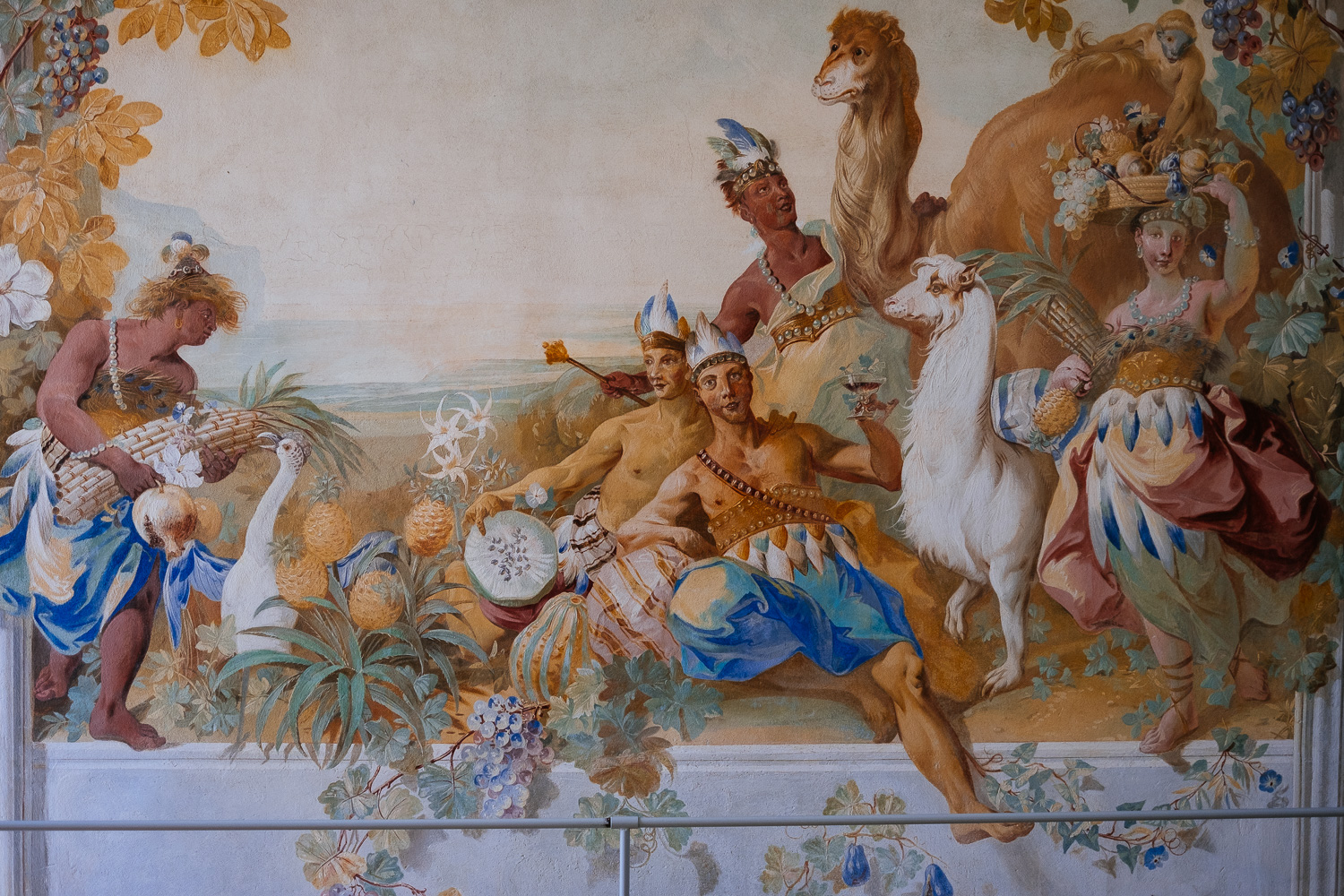 There was a high contrast in between in the interior shots in between the walls and the bright world outside but the X Pro-2 handled it brilliantly. Shots like this would not have been possible with slide film or first generation digital cameras. Today it is not a big deal. Technically I could have gone for an even stronger HDR look but I prefer to keep things natural.

And of course there is the massive resolution. 24MP gives you plenty of details and should be good enough for real world needs, i.e. the occasional photo book or big print. Of course 16MP was god enough most of the times too but now it is no problem to heavily crop into a landscape shot to make a two page panorama out of one single exposure.

The reason I bought into the Fuji system was its size and weight advantage but the reason why I finally sold all my Canon FF gear is the quality of their new 24MP sensor together with their primes is as good if not better to what I got from my Canon. 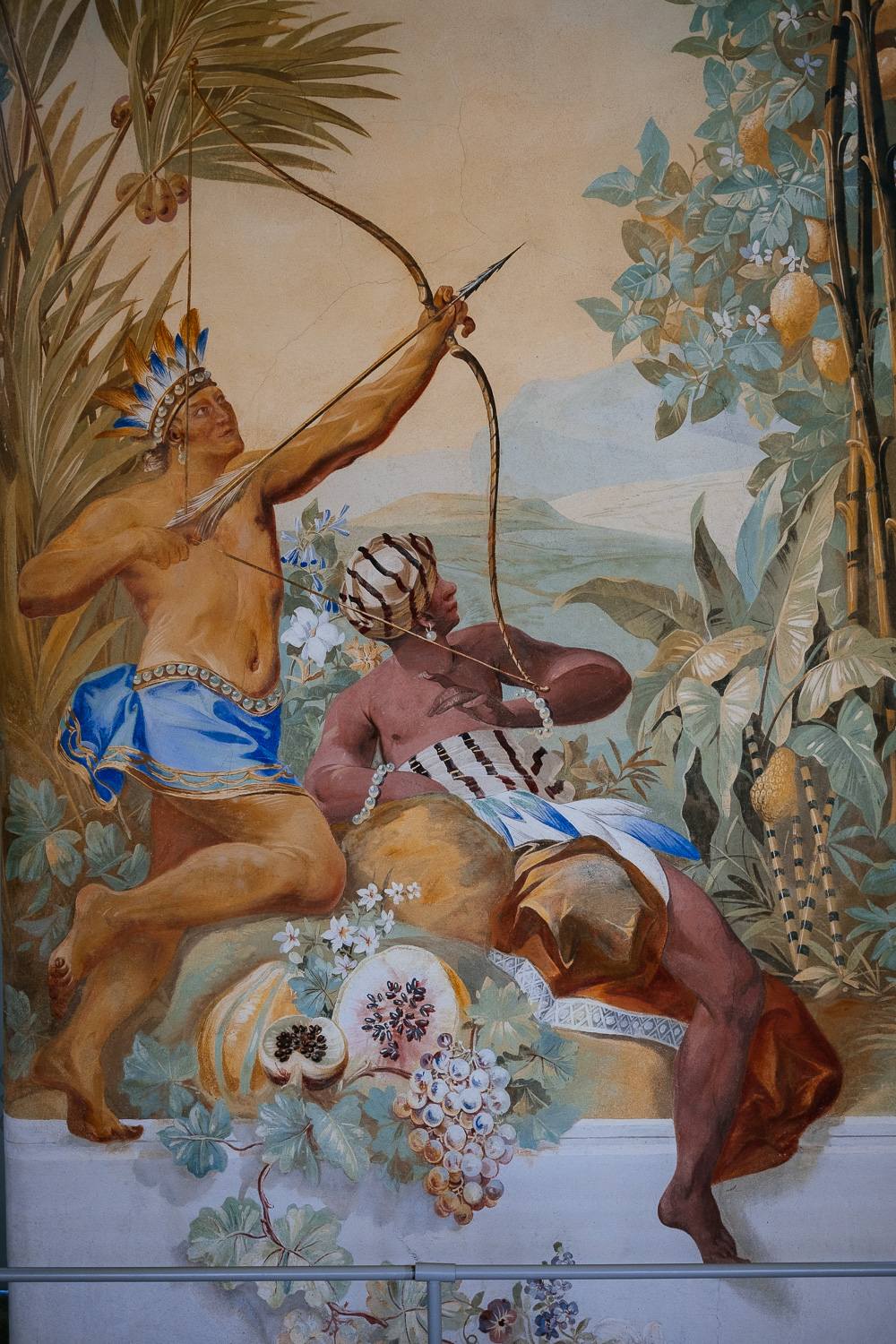 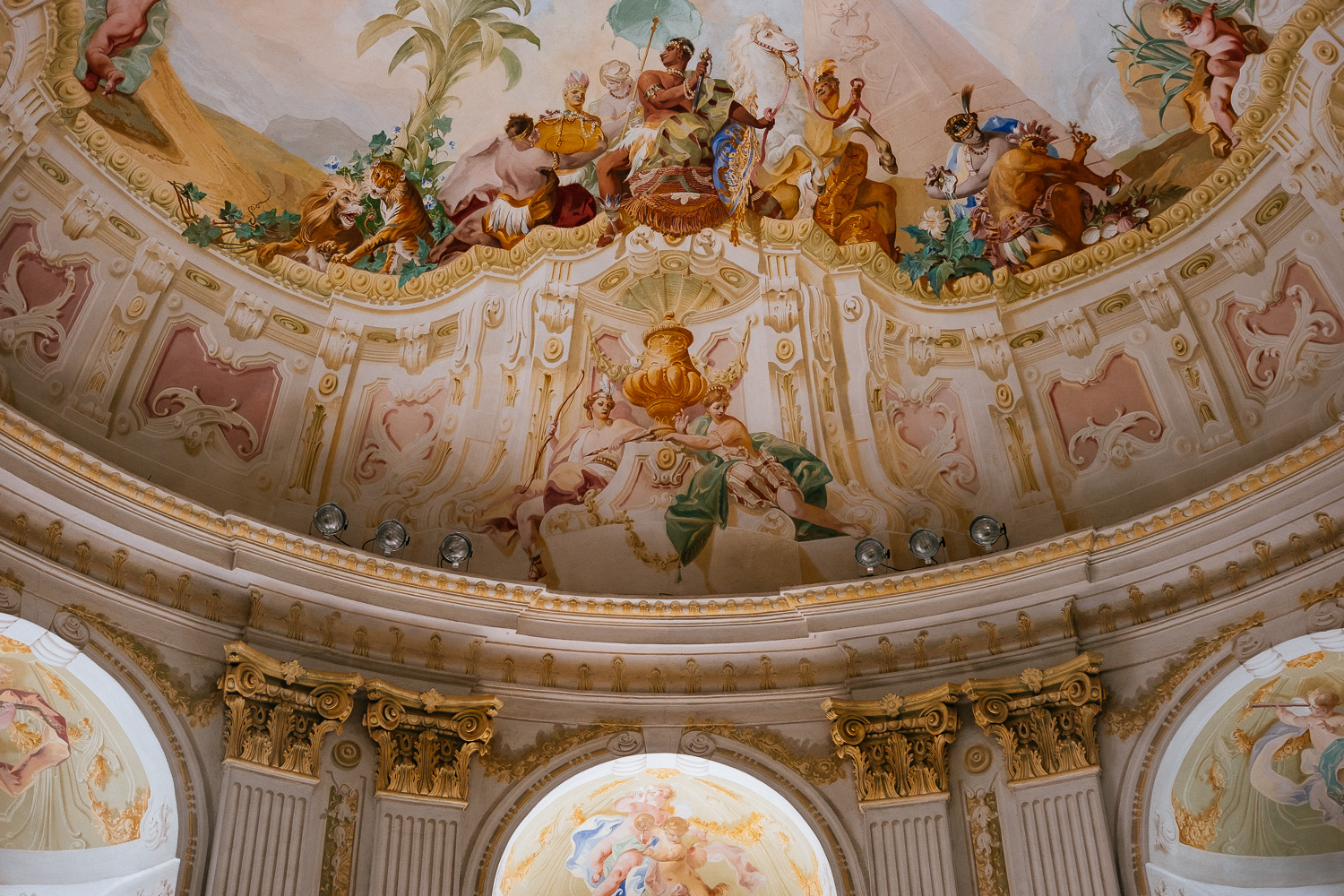