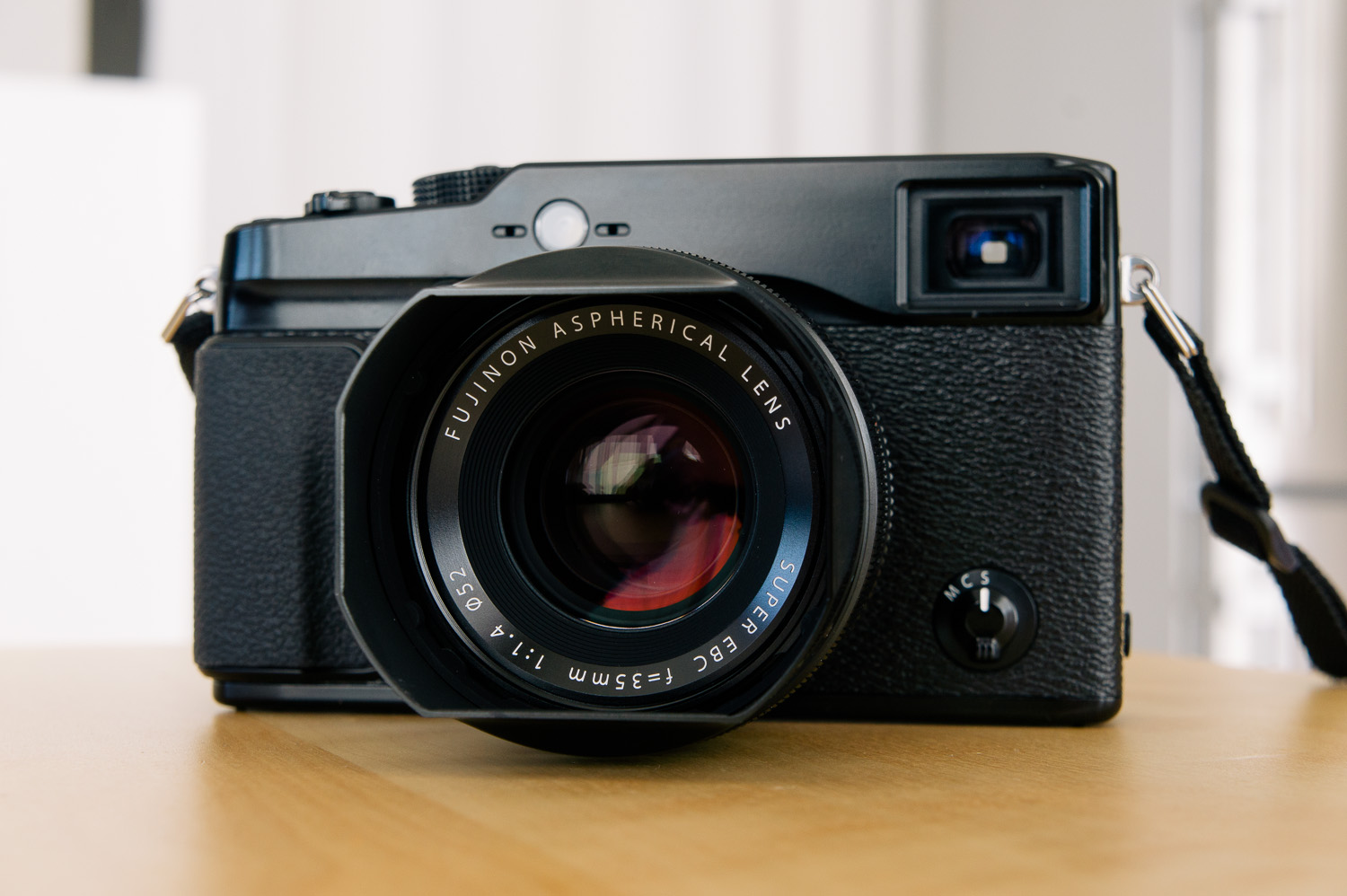 I got my Fuji X100 in September 2011 but it became my most used camera in that year. Even more impressive when you consider that it had the SAB ( sticky aperture blade ) problem, needed to be sent to Germany for repair and missed a trip to Moscow.

I know that the Fuji X-Pro 1 is not a new camera. It came out almost a year ago! By todays standard it’s already old technology and people contemplating about it’s successor. Of course today there is no successor but a smaller, lighter and cheaper version with the same sensor, a better EVF and built in flash. So why get the X-Pro 1 today instead of the X-E 1?

For me it was a very easy decision: I got the X-Pro 1 second hand. Price was exactly the price of a new X-E 1. That was a no brainer for me. With the regular price I think it is much harder decision. I still think that the X-Pro 1 makes more sense for some people.

I never use flash. Maybe because I never had a flash in most of my cameras ( D1, D2H, 5D, NEX 5 ). But most likely because I don’t like the results. I love the OVF ( optical viewfinder ) on my X100. To give it up would be a really hard for me. On the X-Pro 1 it is even more useful. Depending on the lens the frame is smaller ( if you don’t engage the optical element to compensate for the lens ) and you can see what it outside of your image. You can see people that are just about to walk into your frame. This is perfect for street shooting. I have large hands and the X-Pro 1 fits just perfect. It’s still a small camera but it’s slightly larger than the X100 and to me that’s perfect. I think it will also give a better balance with the 18-55 zoom lens and with the upcoming lenses like the 14mm or the 10-24mm zoom.

I don’t try to convince you to buy a X-Pro 1 over a X-E 1. Just make sure that you try out both before you decide and don’t underestimate the value of the optical viewfinder for street shooting. And the screen on the back is a delight.

How does it feel compared to the X100?

The X100 is perfect. I love the look ( would prefer the black version ) and the lens. I really love the 23mm ( 35 mm ) because it is so versatile but sometimes it’s good to have a shorter or longer focal length. The X-Pro 1 gives me that. Well, in the future. Today I have just the 18mm and the 35mm lens. I plan to get the 14mm, the 23 and the 56mm and most likely the two zoom lenses. 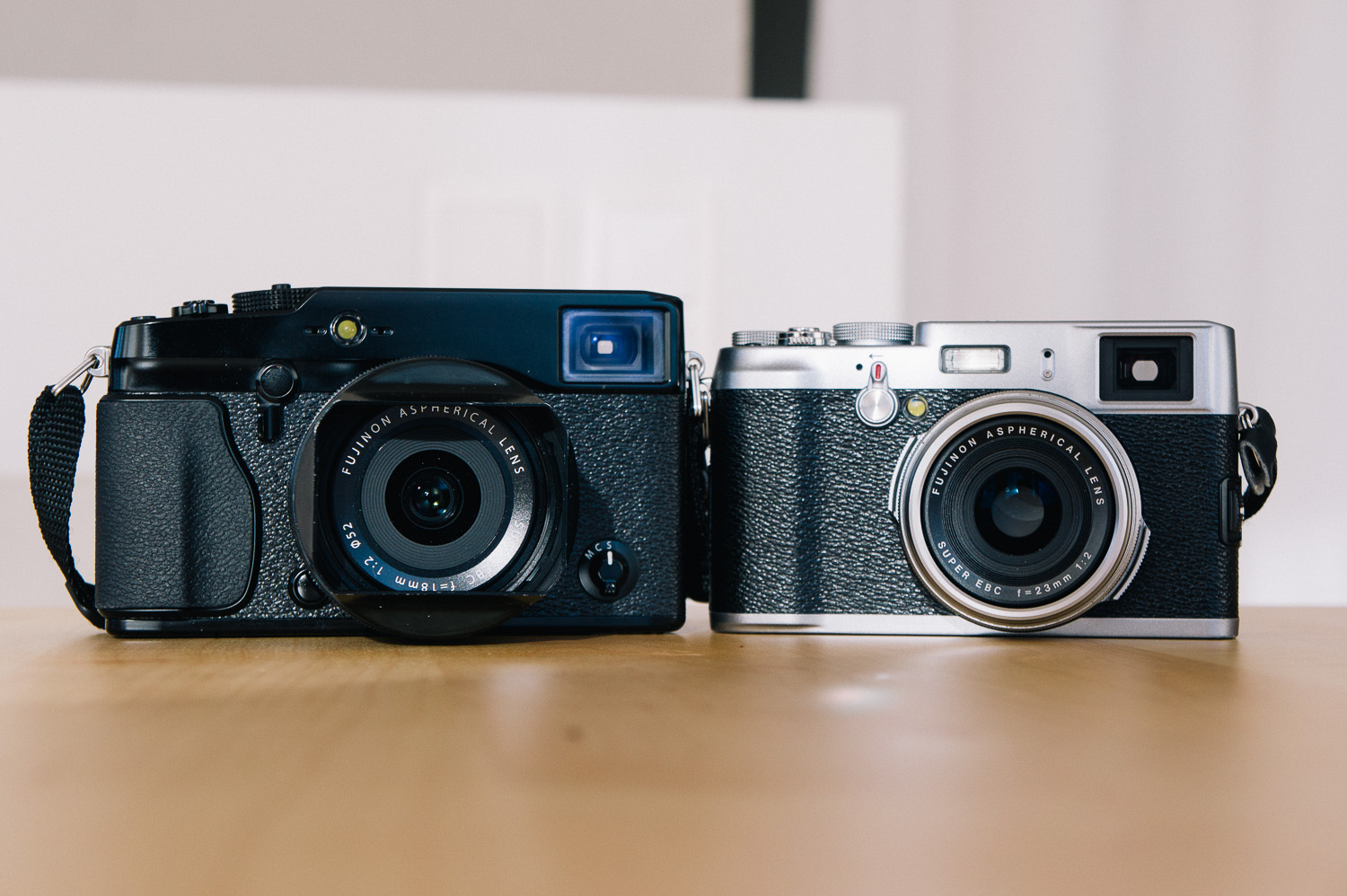 The body is larger and fits my hands better than the X100. With the 18mm lens attached it will still fit into my larger winter coat pockets. Ok but that’s true only with the 18mm lens without the lens shade attached. Put on every other lens available today and you loose “winter coat pocket ability”. The upcoming pancake will be a nice for that. Here is a picture in comparison to the X100. 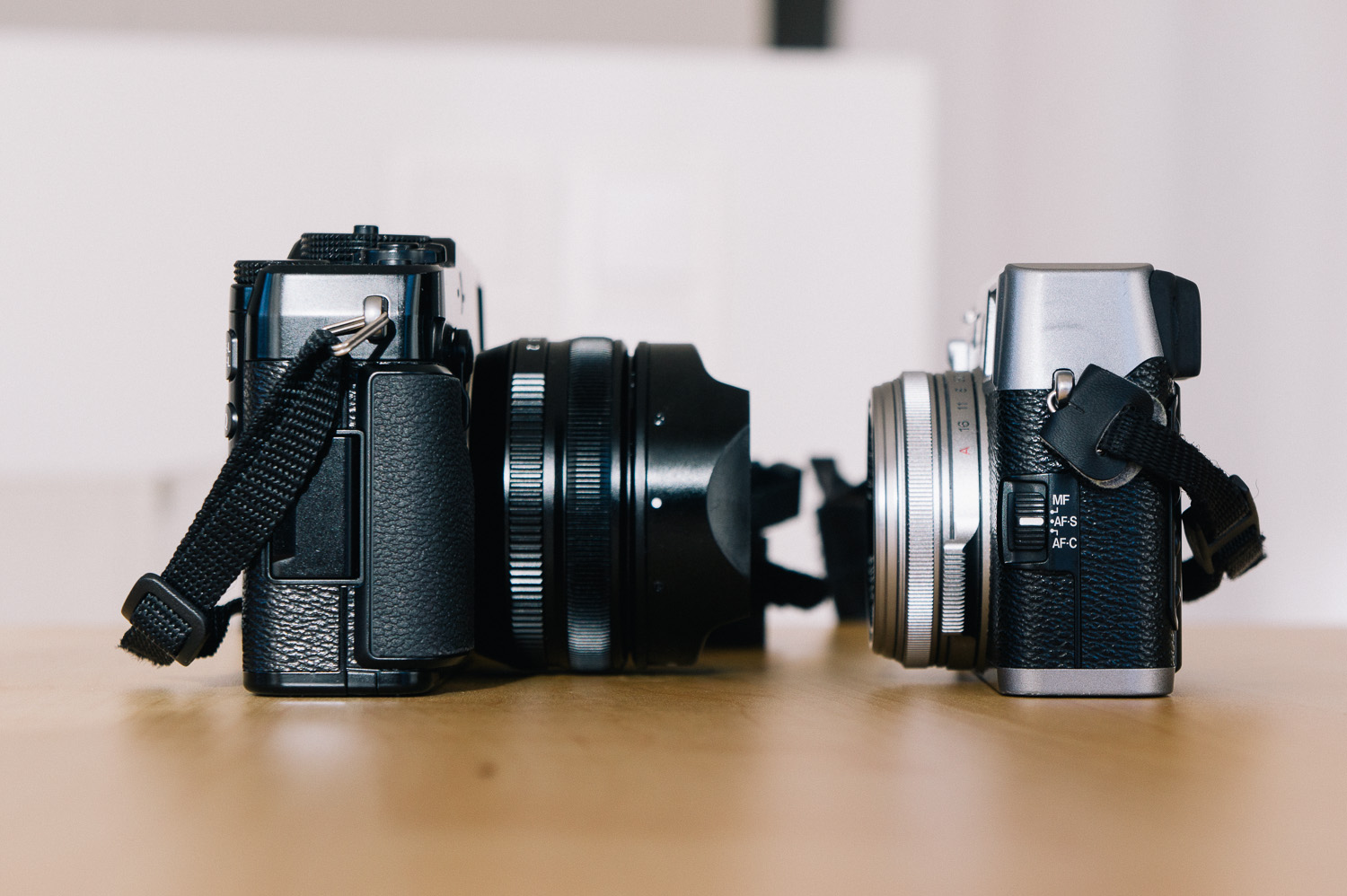 The exposure compensation dial is stiffer which is a very good thing. The shutter speed dial is stiffer too and it is even locked. I don’t think that the lock is necessary at all and I would prefer the smoother operation of the X100’s shutter speed dial. The aperture ring allows to use 1/3 stops but I never use it. I would prefer to have full stops only but maybe the third stop thing will appeal to others. The lever that toggles in between the OVF and EVF has been changed and is now easier to operate with the middle finger. It’s made of plastic and has a rather cheap feel though.

All the other controls are vastly improved. Most important change is that the small ring multi function dial on the back has been changed to a 4 way controller with a large menu button in the center. The useless RAW button is gone and there is a Q button now with a very good menu behind it. Playback and View mode buttons have been moved to a different position. That’s it. A lot of small improvements that add up to an even better shooting experience than what you got with the X100. The only real strange thing is that Fuji is still the only camera maker in the world who is incapable to design a battery that can’t be inserted the wrong way. Sure they printed some arrows on it but how hard can it be? Make it round on one side for heavens sake.

How does it feel shooting with it?

First thing you realize is that it rattles when you turn it on. The X100 does it too but in a more subdued way. The X-Pro 1 rattles like hell. Short but sharp. It rattles when it focuses and it rattles when you hit the playback button. And of course you also got some shutter noise because it doesn’t have the leaf shutter of the X100. But the shutter noise is subtle compared with the other noises it produces. It is not as loud as a NEX but it is also not as discreet as the X100.

How about the rest? It feels snappier than the X100 mainly because it’s turn on time is much shorter. There is still some lag when viewing images even if you use a very fast SD card. In one word: it is not a machine gun. If that is what you are looking for look somewhere else. But it isn’t that bad either. It is a different shooting experience to a professional DSLR and you either adapt and like it or not.

Autofocus was a big issue on the X100 but firmware releases transformed the camera. AF is an issue with the X-Pro 1 too. Even with the newest firmware update I can’t stand AF performance with the 60mm Macro lens. This might be a great lens IQ wise but AF is extremely poor. I will wait for the 1.4/56mm because I also prefer to have a fast aperture to ensure good subject to background separation. I expect AF to be faster too because of the fast aperture and less focus way because it is not a close up lens.

AF with the 1.4/35mm lens is OK but I think it is slower than AF on my X100. I did not use the 35mm a lot in the first days because it is not wide enough for my taste. I see it as a kind of portrait lens. It’s performance is really outstanding even when it is shot wide open. Of course there is also an excellent subject isolation and Bokeh is very nice. That’s also true for the 18mm if shot wide open with the subject not too far away from the lens. Both lenses create very pleasing Bokehs especially if you consider the short focal lengths. I don’t think it get’s any better on an APS-C sensor.

AF with the 18mm lens feels snappy. AF feels faster than on the X100 or on my NEX 5. I really hope that AF with the newer lenses will further improve. The 18mm lens got rather poor reviews on the net though. I also think that it is not as good as the 35mm but it is not a bad lens at all. I really like shooting it. Stopped down a bit IQ improves but I have no problem to use it wide open if the situation asks for it. I like the lens and I’m glad that I bought it. I have to admit that I struggled to buy it after all the negative comments but I got it second hand for a good price. At the moment I’m shooting it more than the 35mm.

I think the X-Pro 1 is a beautiful camera. It is even more beautiful than the black X100. I think it is one of the most beautiful cameras ever built. I know that some hard core users will say that the look of a camera doesn’t matter as long as it performs. I don’t believe in that. Photographers are in constant search for beauty.

It does’t help you to take better images but it ‘s nice to have a camera you can look at without feeling the need to throw up. I can’t image I would have bought this camera if it looks like the Hasselblad Lunar.

It is not as quiet as the X100 but hardly anything is. It is still an unobtrusive camera to avoid the word stealth. It fits perfectly well in my hands and I think I can get away without pimping it with all sort of devices like thumbs up, extra grip or Beep Boop. If you didn’t understand anything now you probably don’t own a X-series or Leica or you just don’t care to read about cameras on the internet. But if that’s the case you would not be reading those lines.

It’s not the fastest camera on the planet and I have to admit I would prefer to have faster AF and it would also not hurt my feelings if Fuji would offer face detection. They can hide it in a sub menu and deactivate it in the default setting if they like but it would be great if they leave it to the owner to decide to use this feature or not.

But despite all it shortcomings to me this is the best traveling camera today. It is an absolute joy to use. You can stay away from the menus. There is an aperture ring, there is an exposure compensation dial and there is a shutter speed dial if you want to go full manual. Everything is there, plain and simple and one has to ask why other cameras are so complicated. This is not a camera for everyone or for every type of shooting. You must be mad to use it for any kind of action like playing kids or pets. But it is an extremely rewarding camera if you take your time and shoot in a way you did before digital: Take a good look first, think, choose the right aperture, compose the shot and push the knob.

1. AUTO ISO menu like the one in the X100. There is no logical reason that one of the best high ISO camera today produces unsharp shots because the AUTO-ISO decides for too slow shutter speeds to avoid higher ISO settings.

2. Maybe a little less rattle if possible. I don’t know why it is necessary for the camera to play with the aperture blades when I push the playback button.

A rather short list but especially the first point would simplifying shooting the camera a lot.

In my next article I will have a look at the image quality. I’m a RAW shooter and Lightroom user and I have no intention to give up one or the other. Meanwhile:

Happy New Year 2013! I know that these wishes are already too late for most of you.