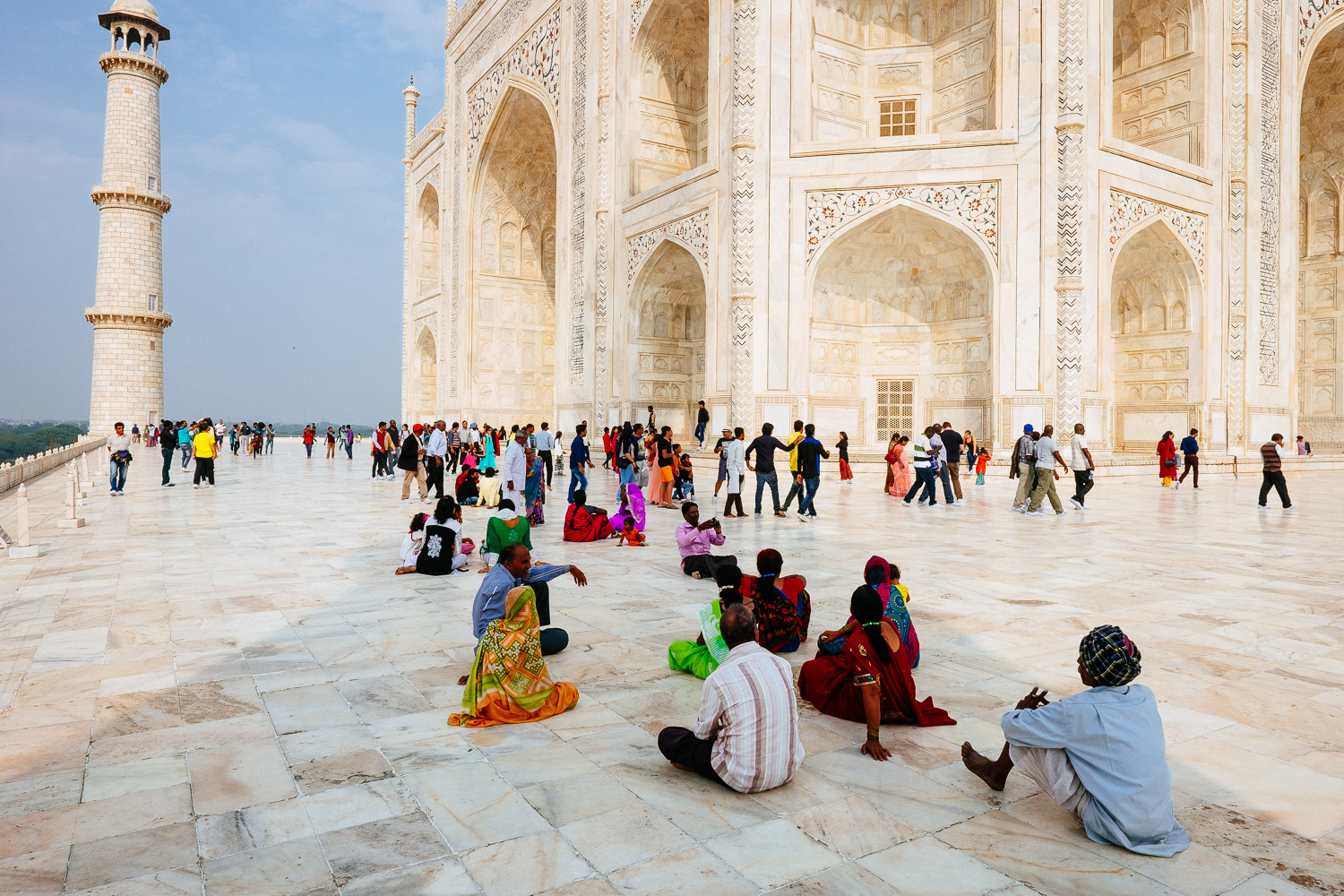 In my previous blog post of my visit to the Taj Mahal all shots were taken with the kit lens. In this blog post they are taken with my favorite Fuji lens – the XF14/2.8 R.

As I moved closer to the Taj Mahal it was clear to me that now is the time for the 14mm lens. I already praised this lens a lot on my blog. If you scroll down to take a look at the tag cloud of my blog you can see that the 14mm is my main lens and there is a reason for it. The 14mm (or 21mm in full frame terms) is a surprisingly flexible lens. It has many advantages not only over the kit lens but also over the 10-24 but of course it depends on your shooting style and subject if you value them as much as I do. Here are the most important ones:

The zero distortion plus the fact that the 14mm lens allows me to get more of a building into the frame without the need to tilt the camera upwards helps tremendously to keep the lines straight. The one most annoying thing in wide angle shots of buildings is that they look like they are falling backwards. The only way to avoid this is to keep the camera straight. Of course that means that there is a lot of foreground which must be filled with something. If you are in Asia the simplest way is to fill it with people. There is another good reason to put people into your shot. It gives the viewer an idea of the scale.

But sometimes it’s nice to leave the foreground empty to open up the space. 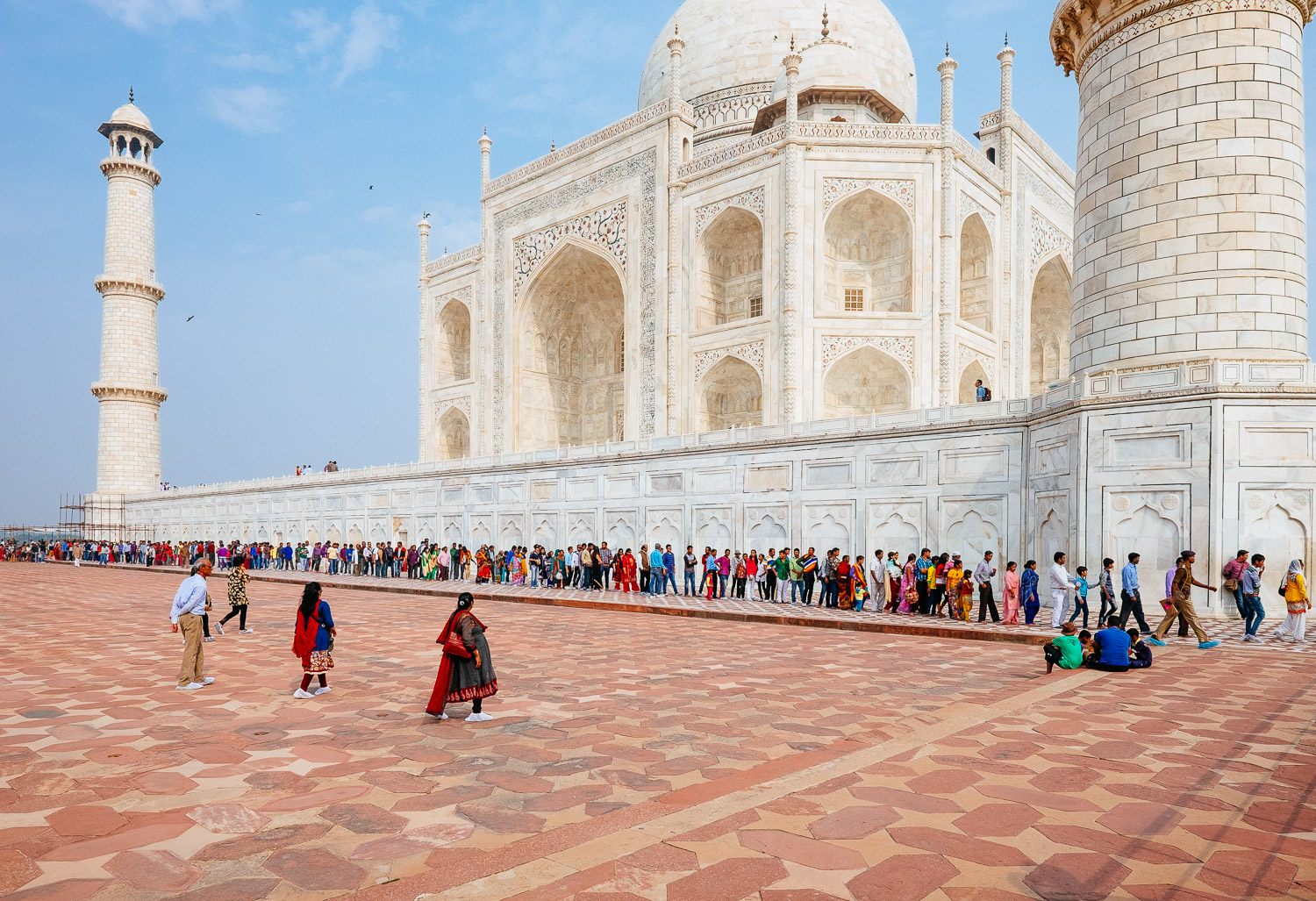 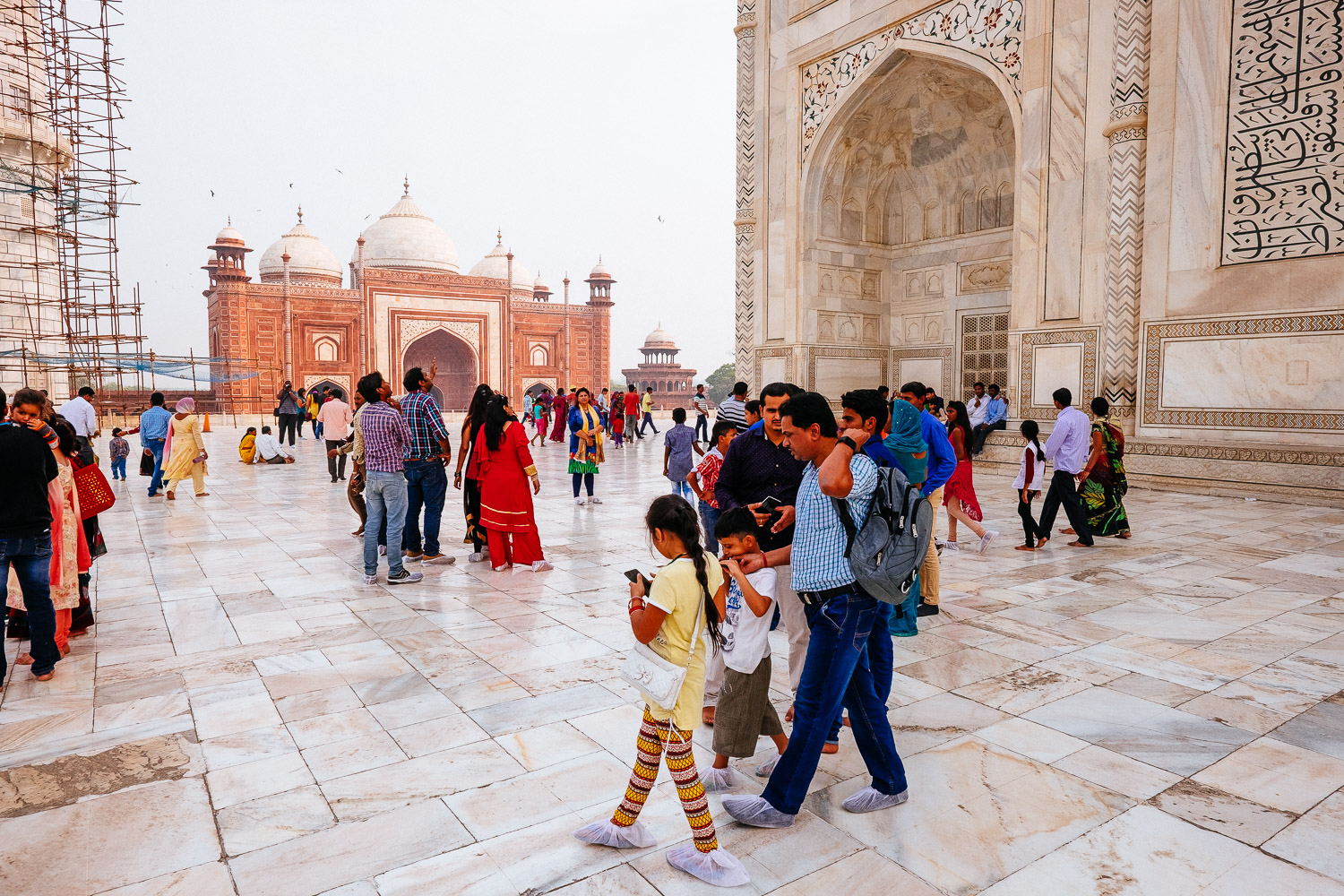 Many of those shots are slightly corrected though to avoid falling lines. If I want to include something in the foreground I have to tilt the camera down or I need to tilt it upwards to avoid to cut off a tower. It is always a compromise but because of the wider coverage of the 14mm lens this is easier to handle than with a 16mm or with the 18mm of the kit lens.

To me the 14mm is the most important Fuji lens and I think it is THE lens to buy to complement the kit lens that came with the camera. The big advantage is that it improves landscape, architectural and interior shots while the whole camera kit still stays small and portable. It is amazing what this simple, small and light two lens kit can do. 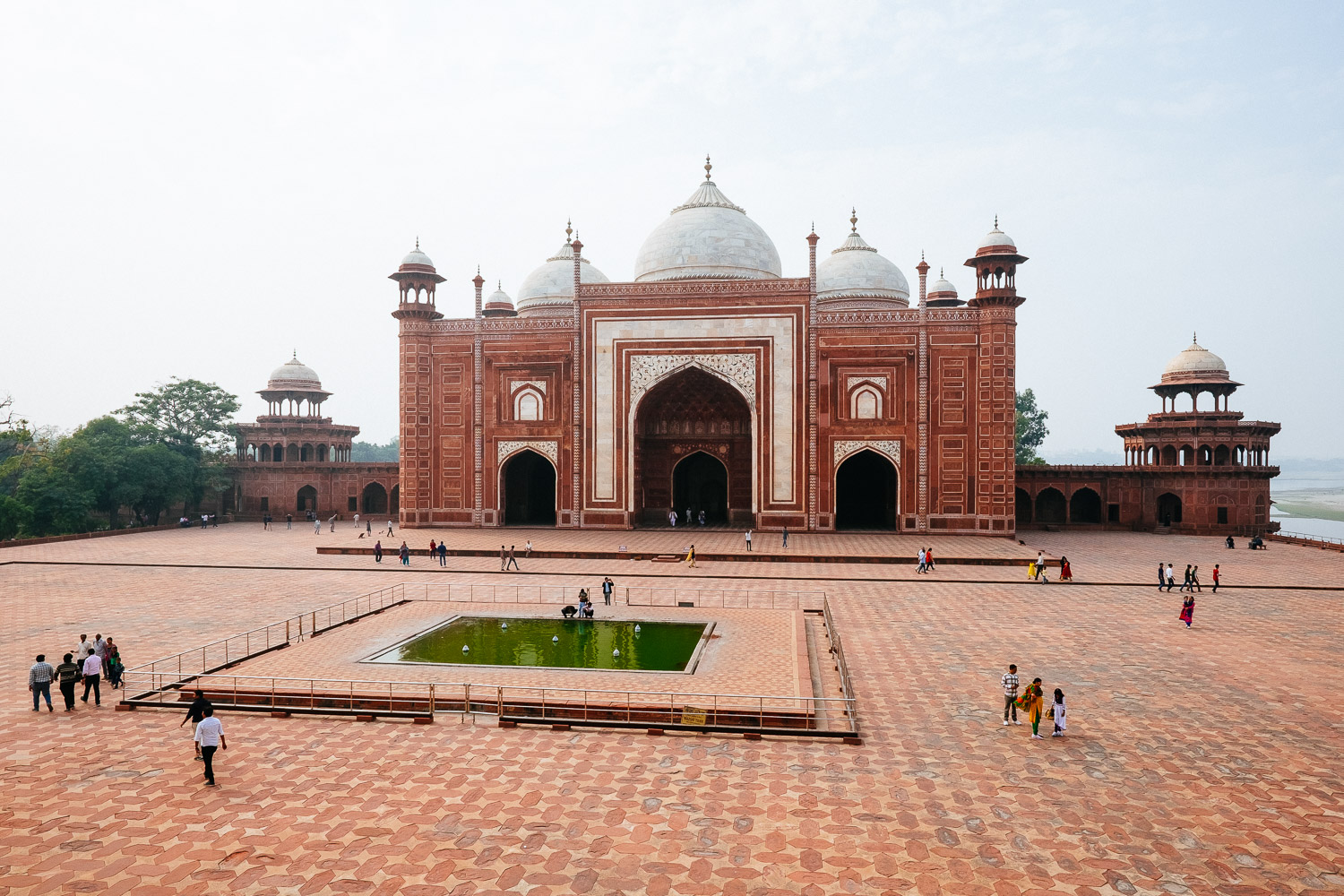 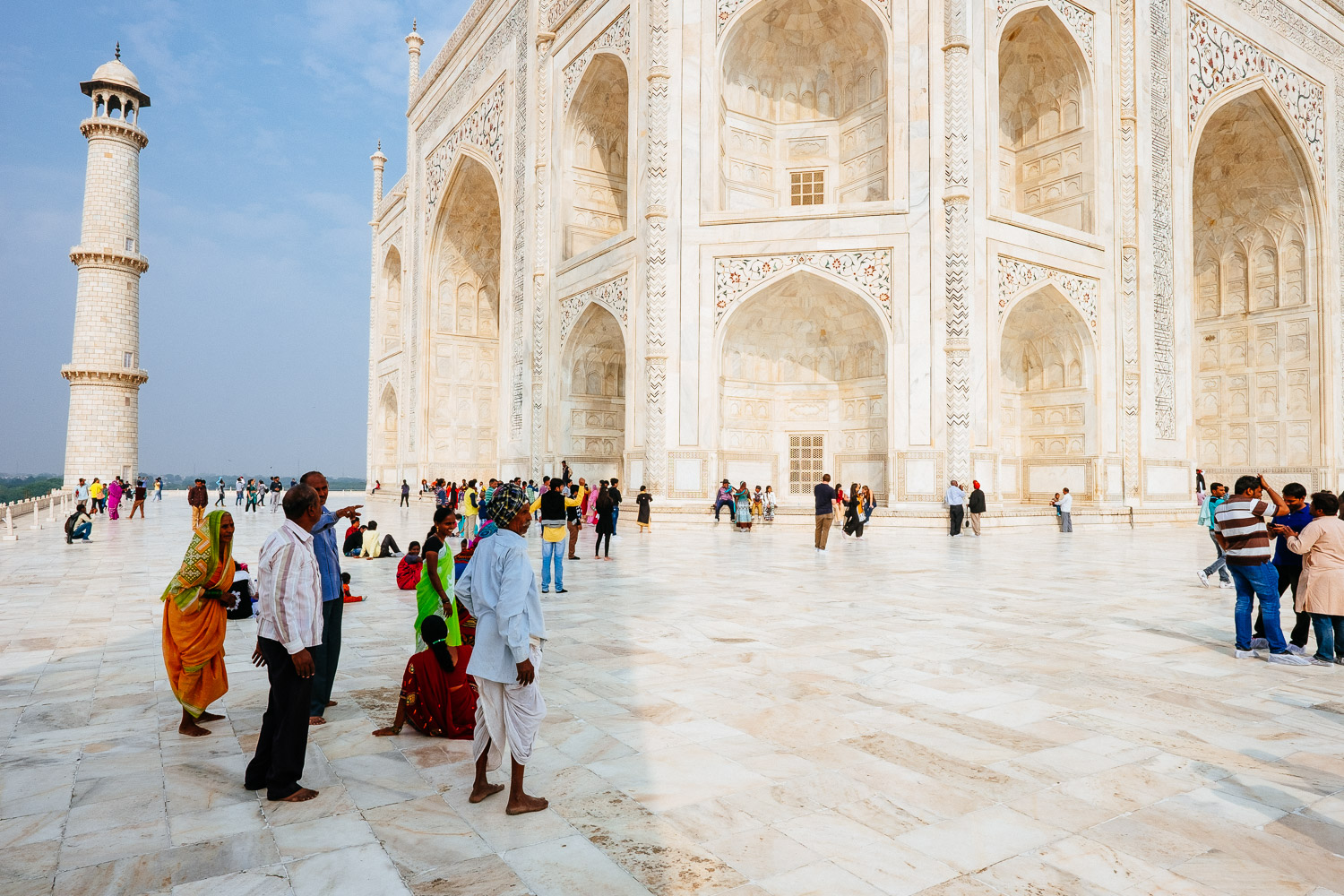 One thing I like a lot about the people in India is that the all dress in very bright and bold colors. In Austria most people prefer darker tones or even black. I always wear black. Real men wear black. But in my pictures I prefer the colorful dresses they wear here. They also go very well with their skin tones. 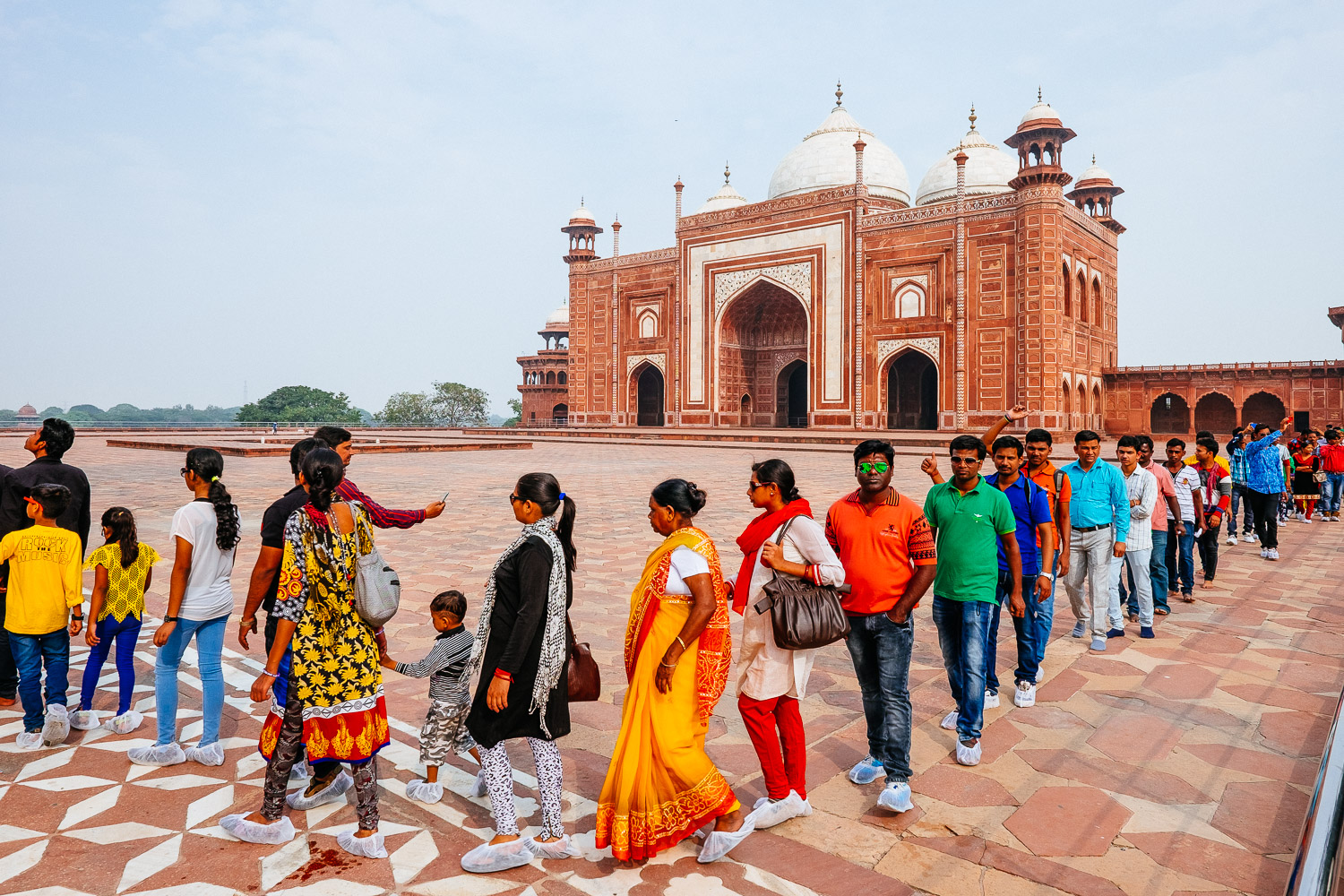 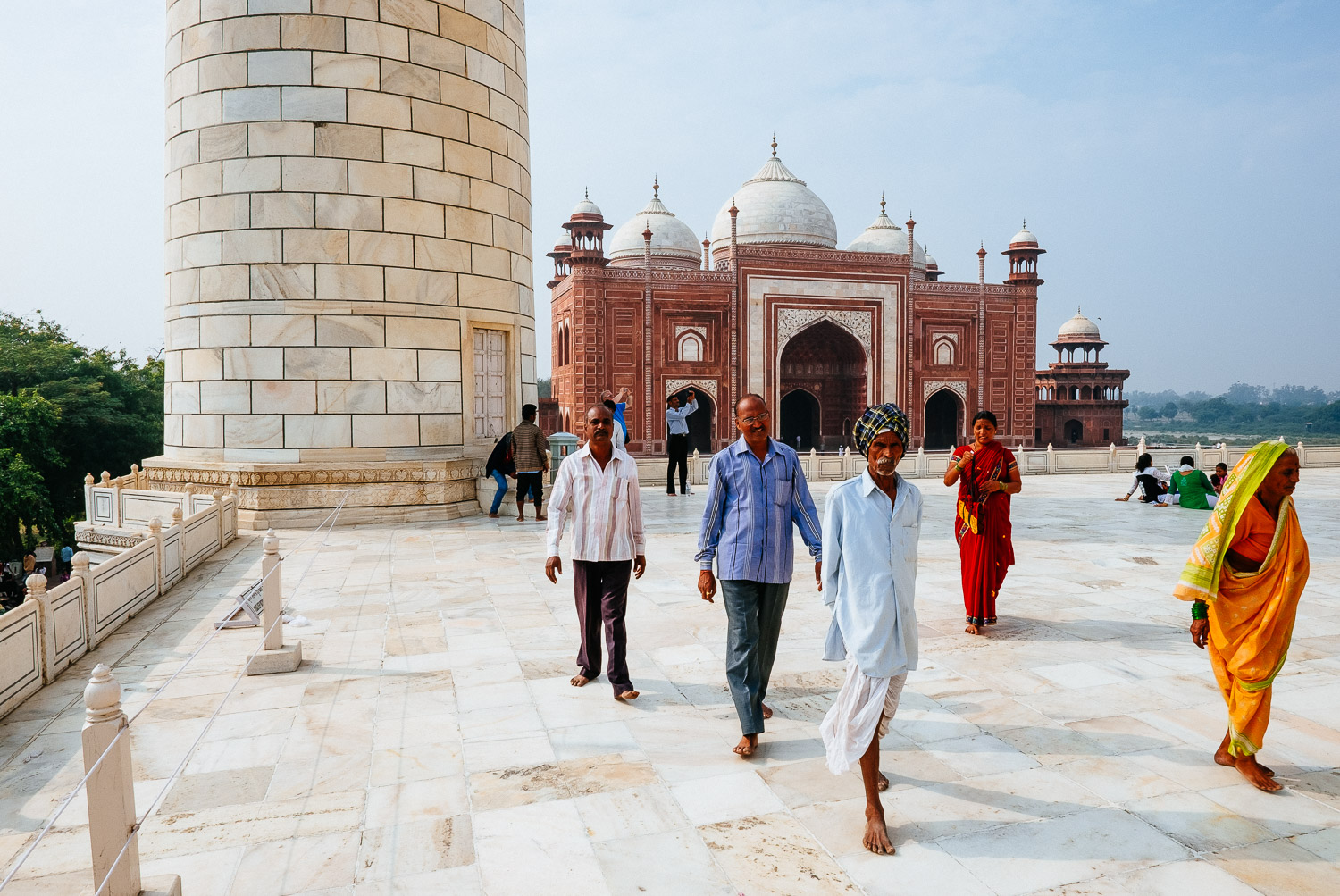 I was glad that the majority of the visitors were Indians. The pictures would have come out completely different with German and UK tourists. This is an Indian monument and it belongs to them. Beside that they look much more elegant especially if they walk barefoot like in the image above. Now imagine the same picture with a group of pale, red faced tourists in socks and sandals. Not so good!

BTW: All those people are cueing up to get inside. But there is no reason to line up. Very much like the fantastic Guggenheim museum in Bilbao, Spain the Taj Mahal is much more impressive from the outside. Inside there is nothing but two tombs. But if you think of it the whole building gets even more impressive. The Taj Mahal is not a castle or a monastery it is nothing but a tomb. A gigantic one though. 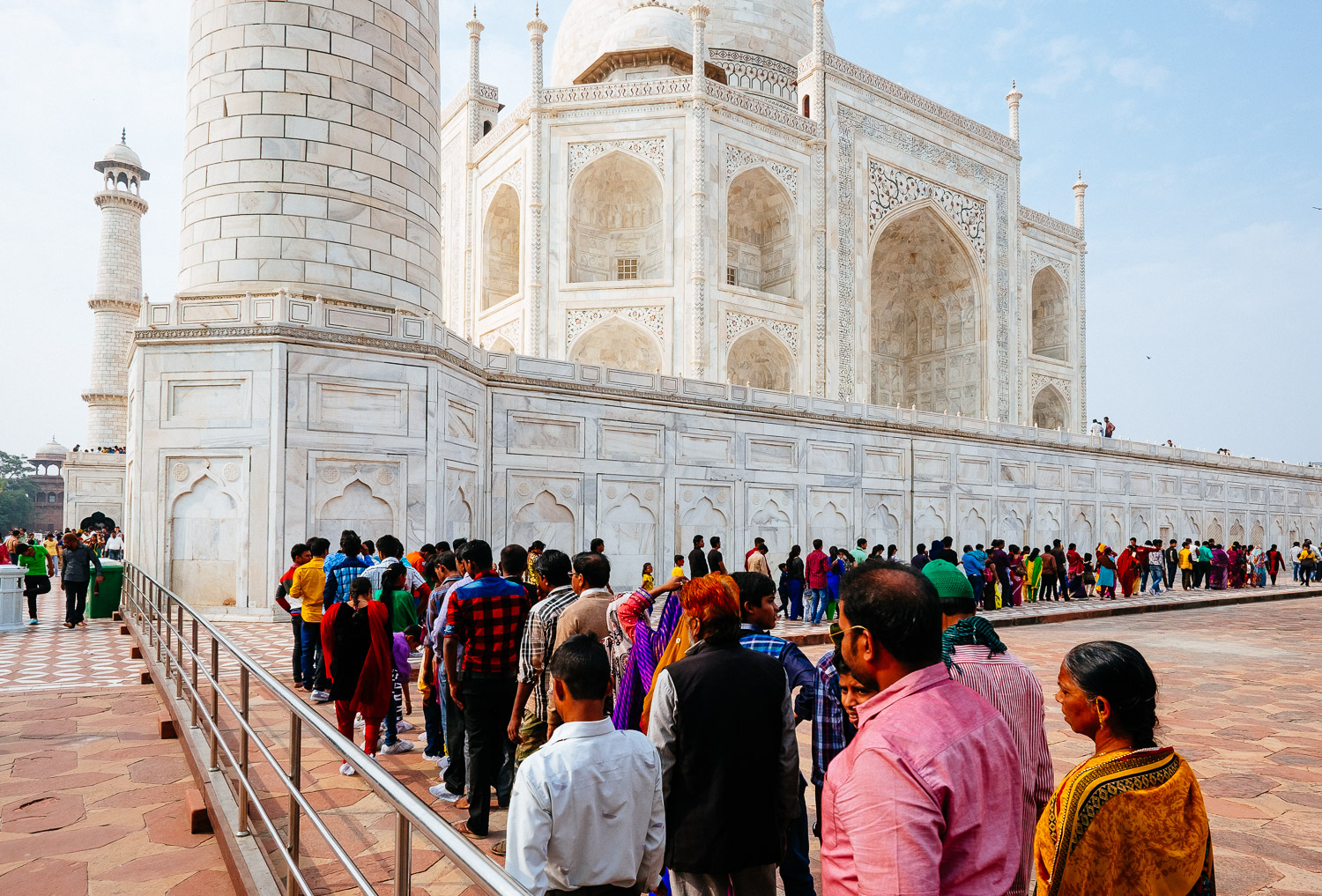 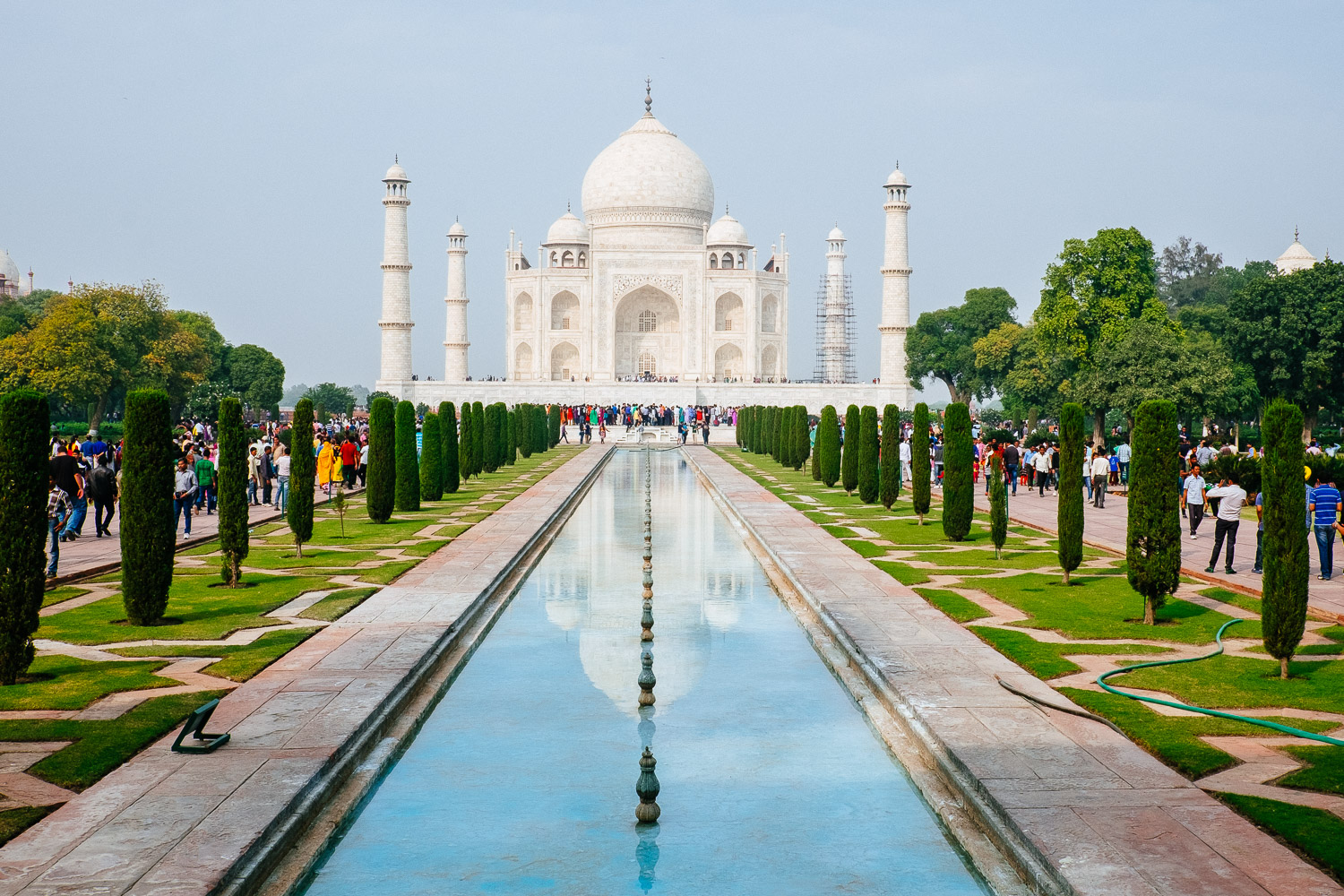 OK not all images were taken with the 14mm. There is one I took with the kit lens too. The final look back! There is a reason why almost everybody in the world knows this building. It is simply breathtaking. But images can’t do it justice. You must experience the Taj Mahal in real life. Don’t worry about the crowd, don’t worry about the light. Just come here and enjoy. It will give you goose bumps despite the 35 degrees Celsius.

But make sure that you have the right lenses with you. I recommend the kit lens and the Fuji XF14/2.8R. Both together are lighter than the big and heavy XF 16-55/2.8R and they will give you better pictures too. 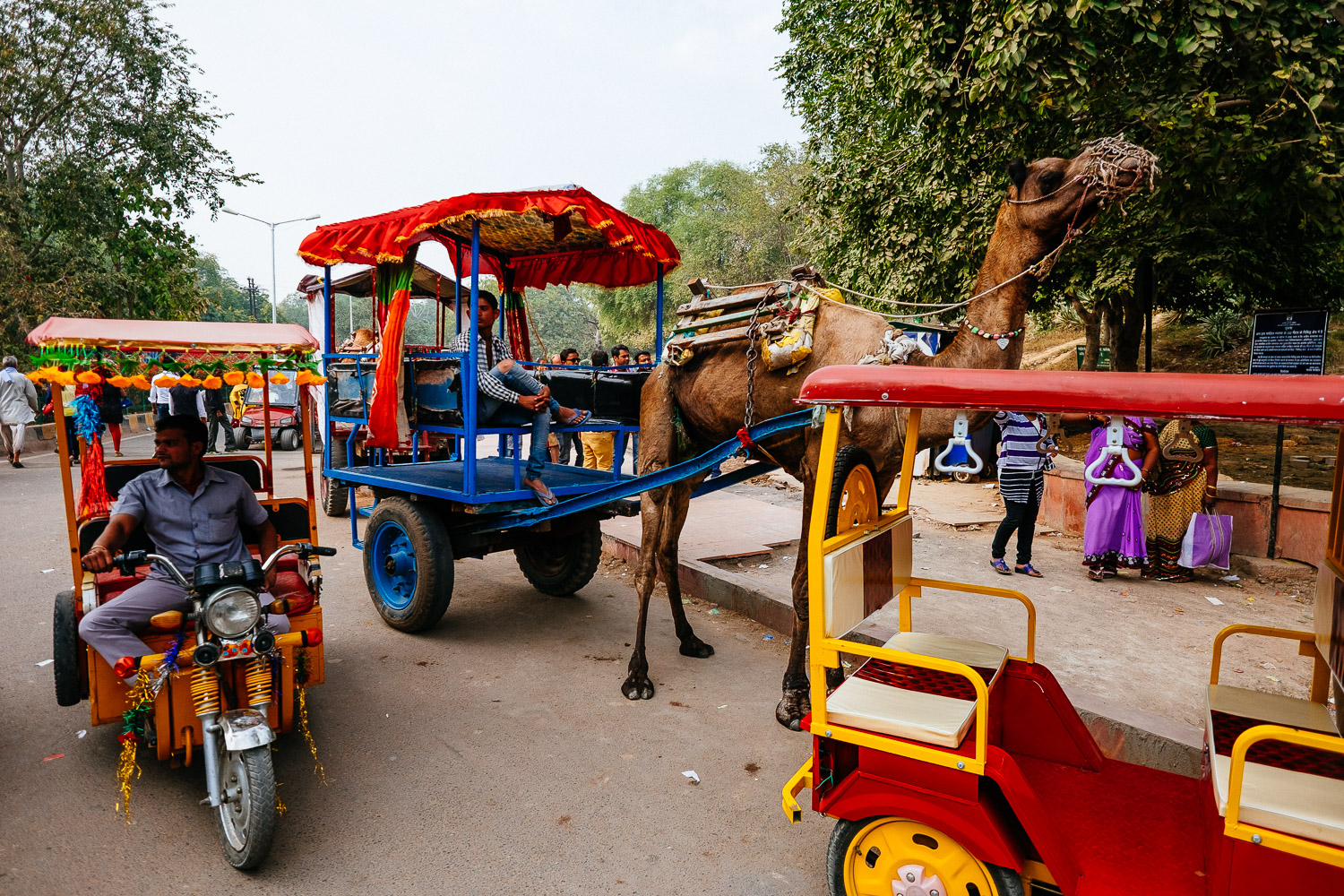 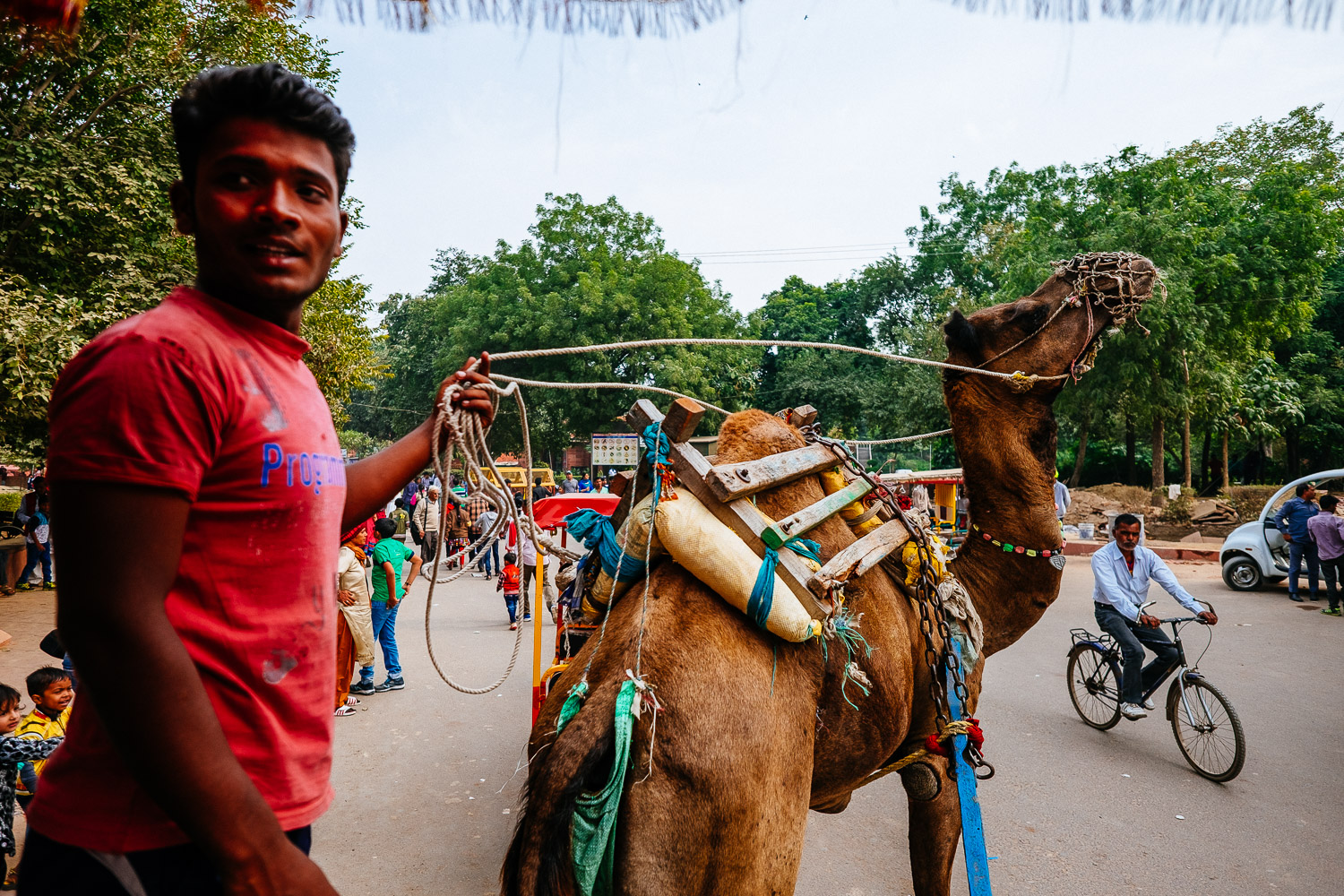