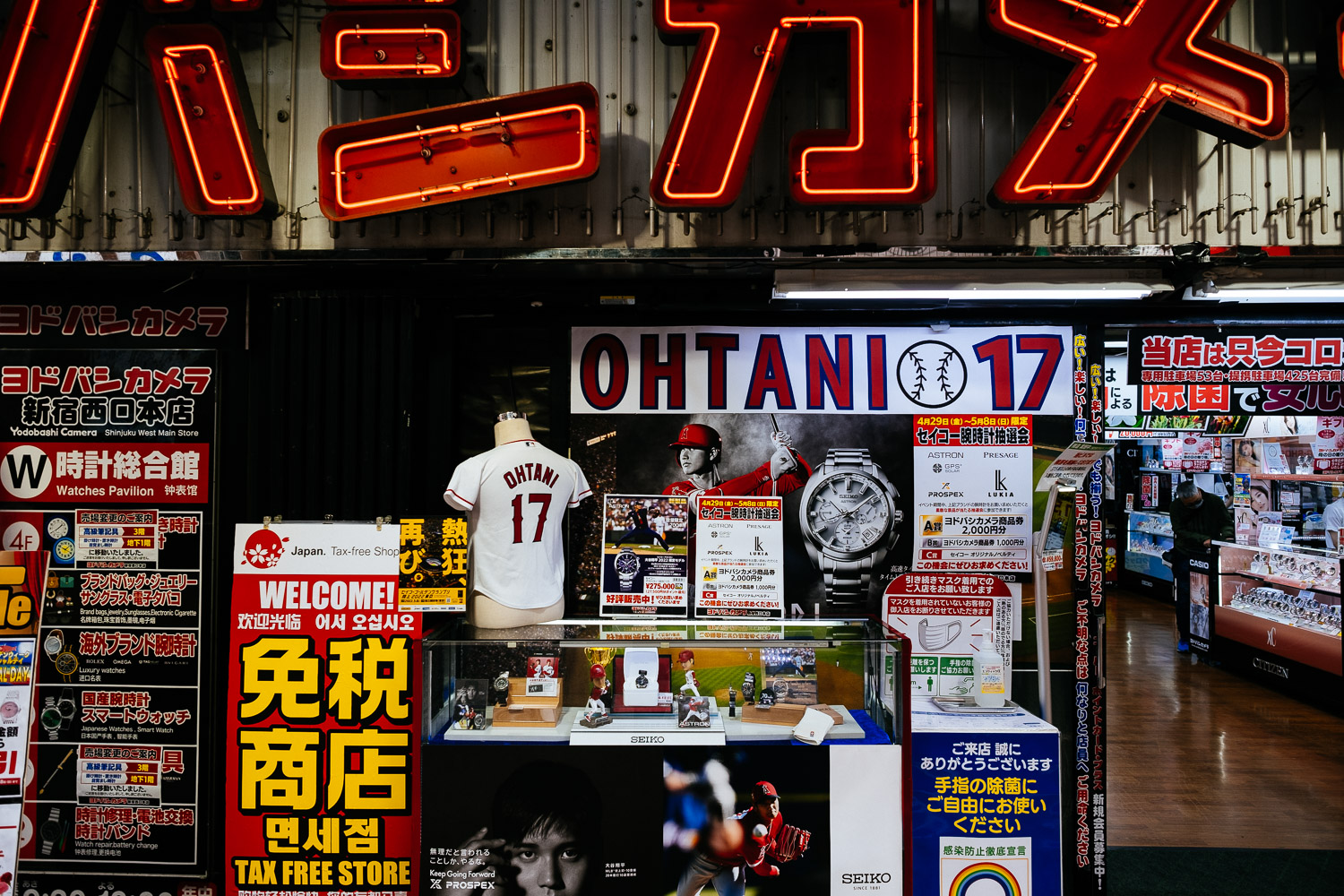 My trip to Japan was complicated and long. From door to door almost 24 hours! So I decided to go for a long walk after I dropped my luggage and had a shower.

I walked from my hotel in Shinjuku to the Kabukicho district. The red light district. Not as dirty as it sounds, at the end this is Japan. My Japanese friends told me that this used to be a tough area where the Yakuza ruled but those days are long gone. Now there are warning signs that some bars might overcharge you. It is still a very cool and colourful place and Godzilla lives here. 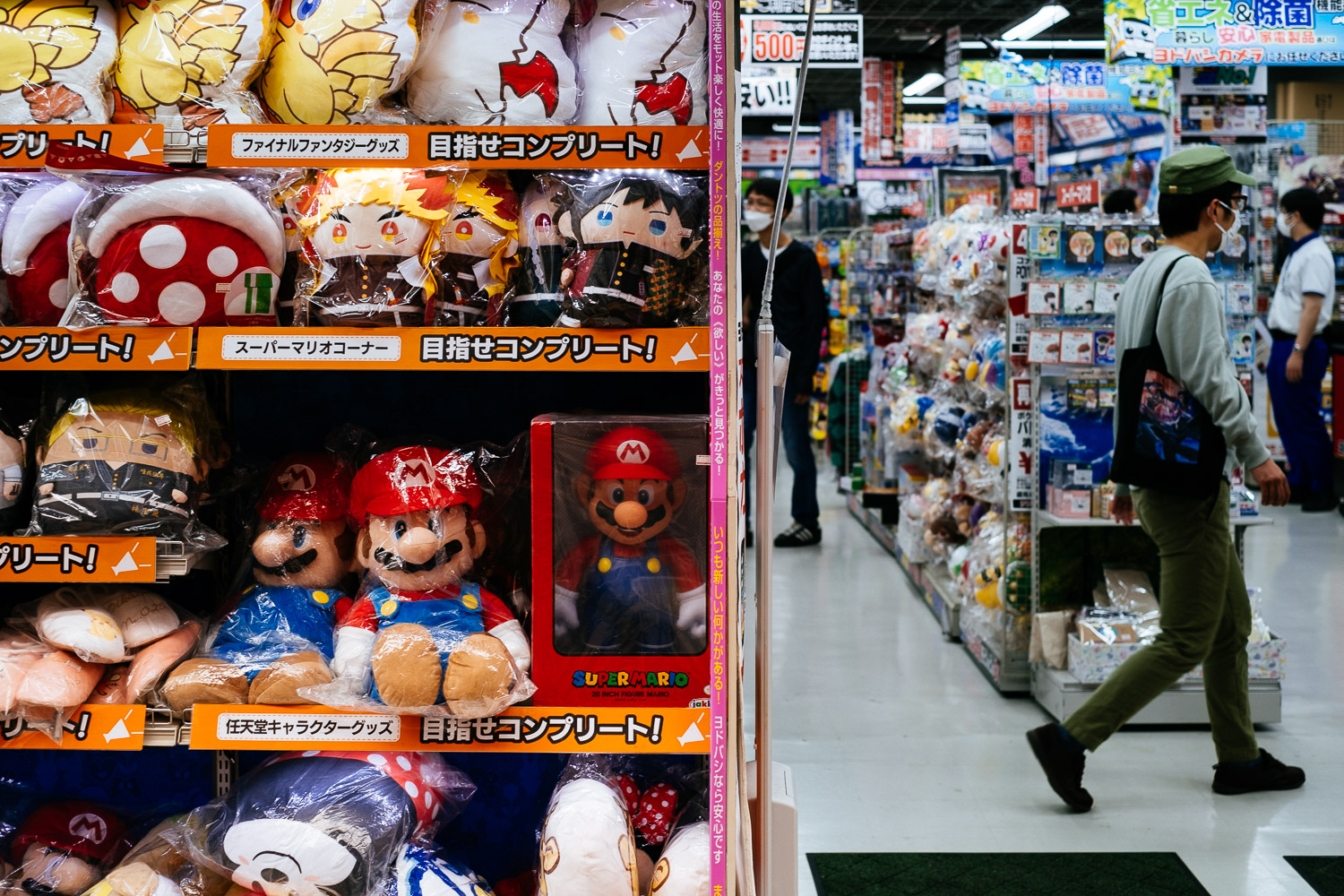 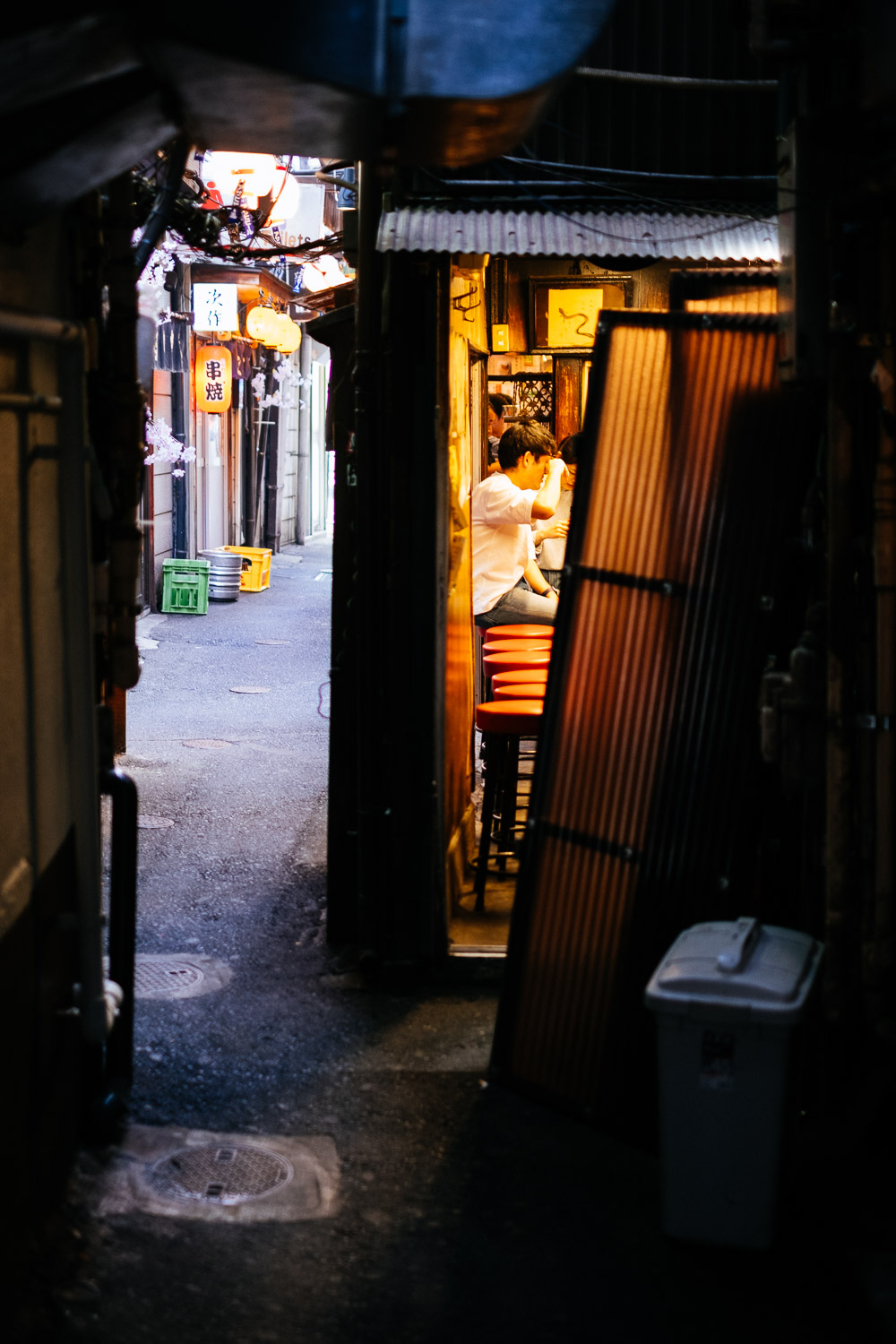 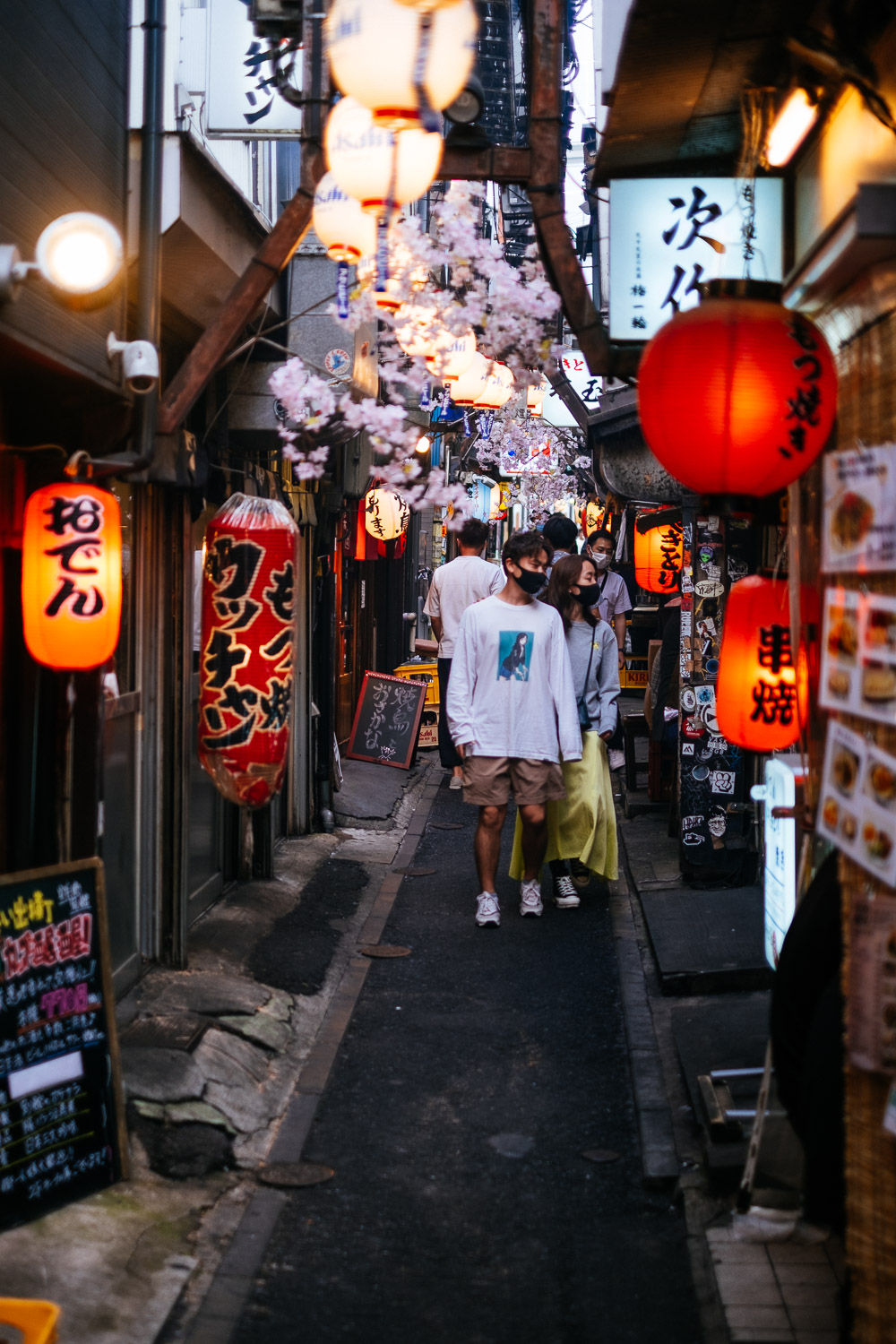 On my way there I passed through Yakitori Street or Memory Lane or Piss Alley. A place that I have covered on my blog a couple of times already. It’s beautiful, raw and old fashioned. It looks out of place in modern Tokyo and that’s why I like it so much. It is only a short and dark alley in the middle of Shinjuku but it feels like a time travel.

When I entered well before sunset but the alley was already dark. Because I usually take the majority of my pictures with the XF14/2.8R I decided to put the XF35/1.4R on my camera for a change. This is my oldest lens. I got it 10 years ago together with the X-Pro1.  Back then I loved and hated the lens at the same time. I loved its images but hated the its pedestrian AF. On the X-Pro3 this lens is still no speed demon but AF now is rather quick. Regarding AF Fuji has come a long way. I had the X100 with the original firmware which was barely useable. the X-Pro1 was only slightly better, the X-T1 was also slightly improved. The big jump came with the X-Pro2. As far as I can tell the AF on the X-Pro3 improved again especially in low light and now even eye-AF works. 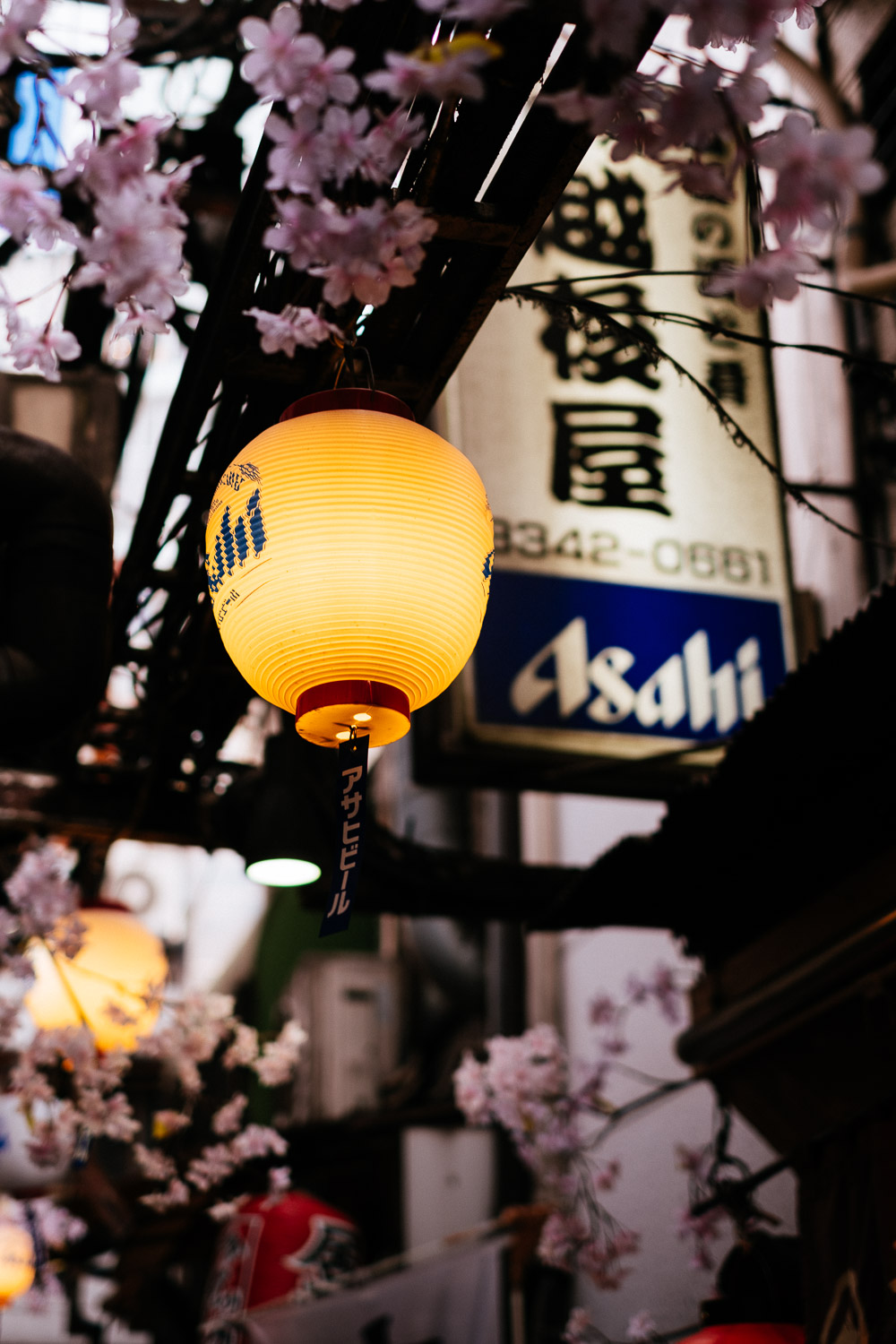 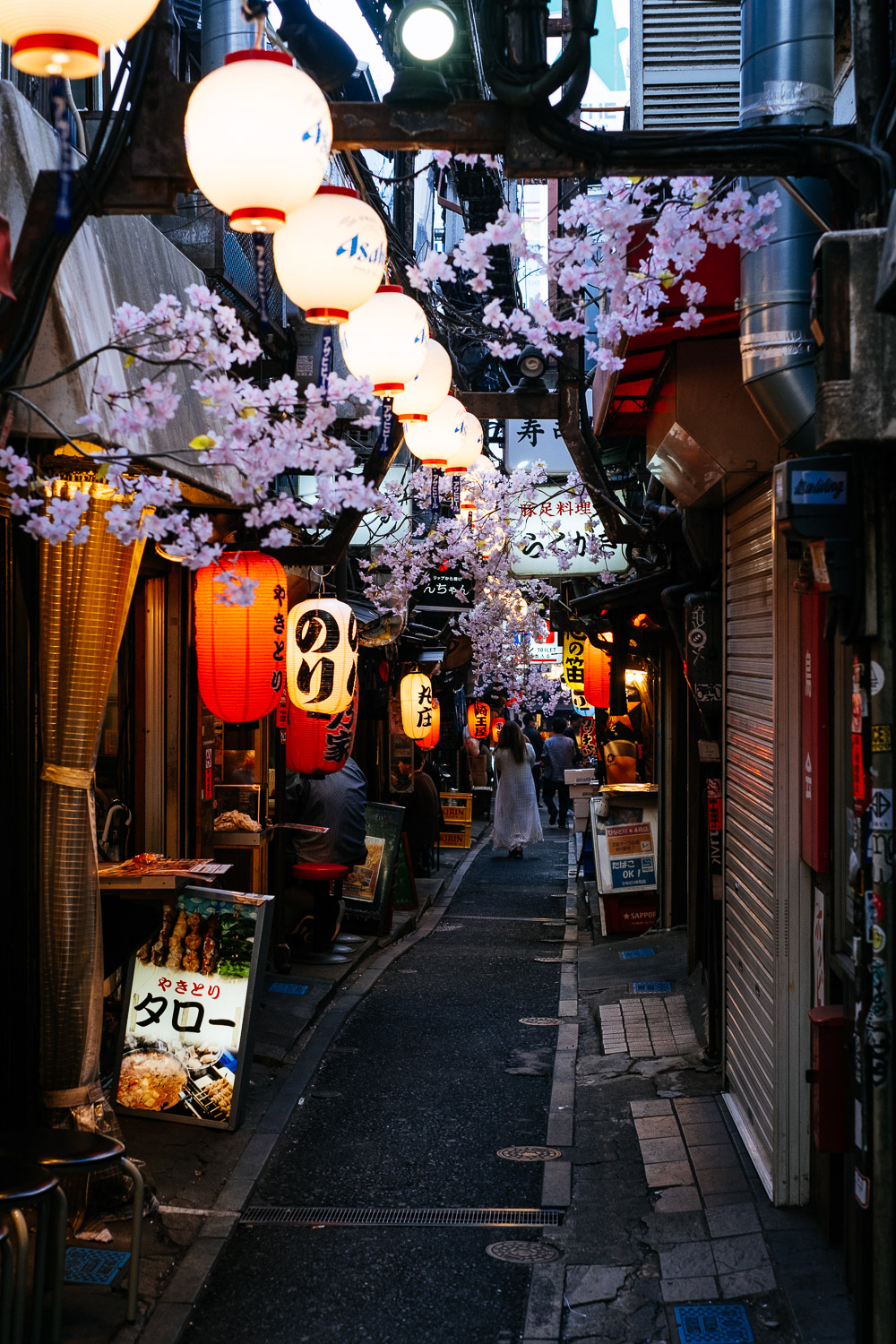 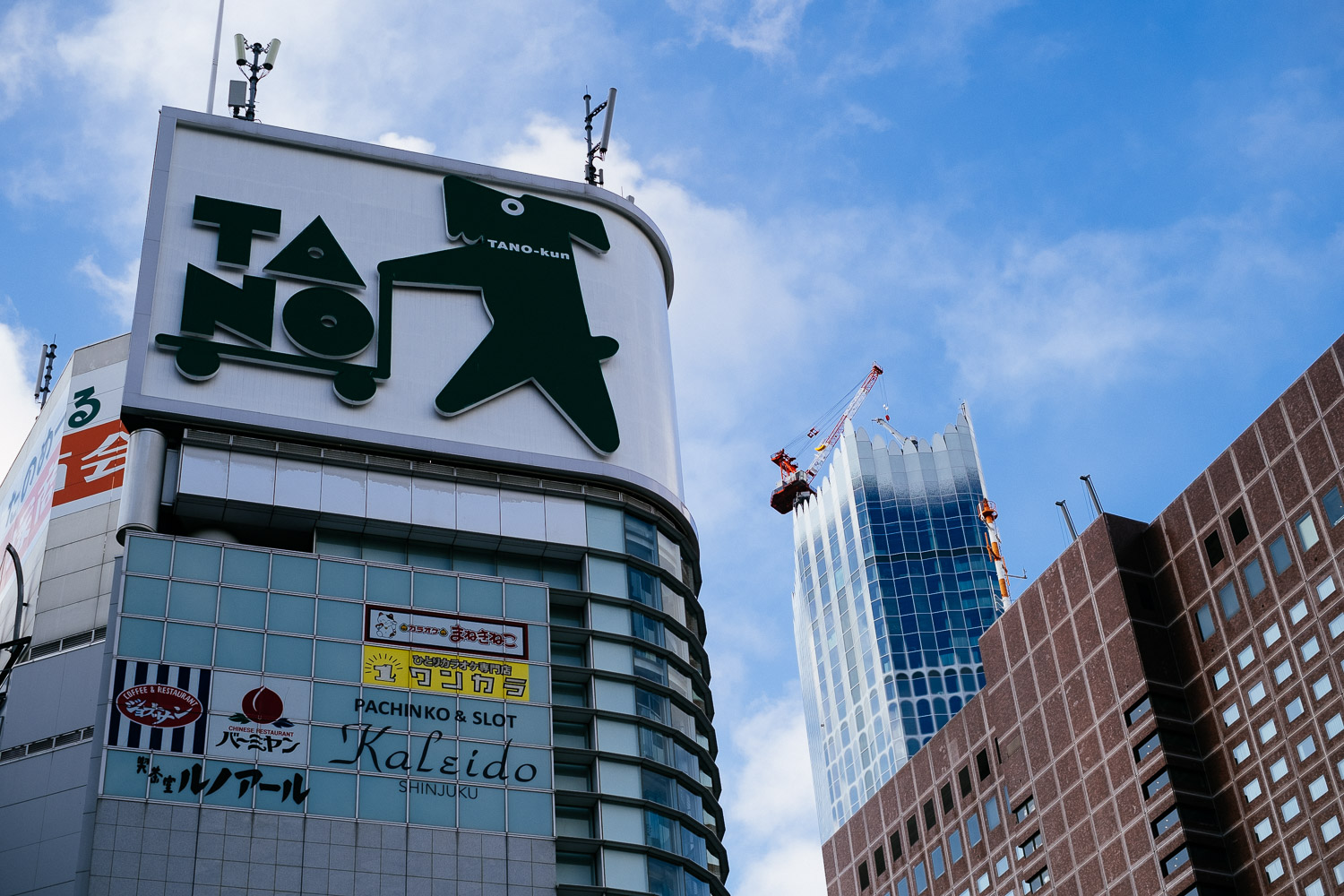 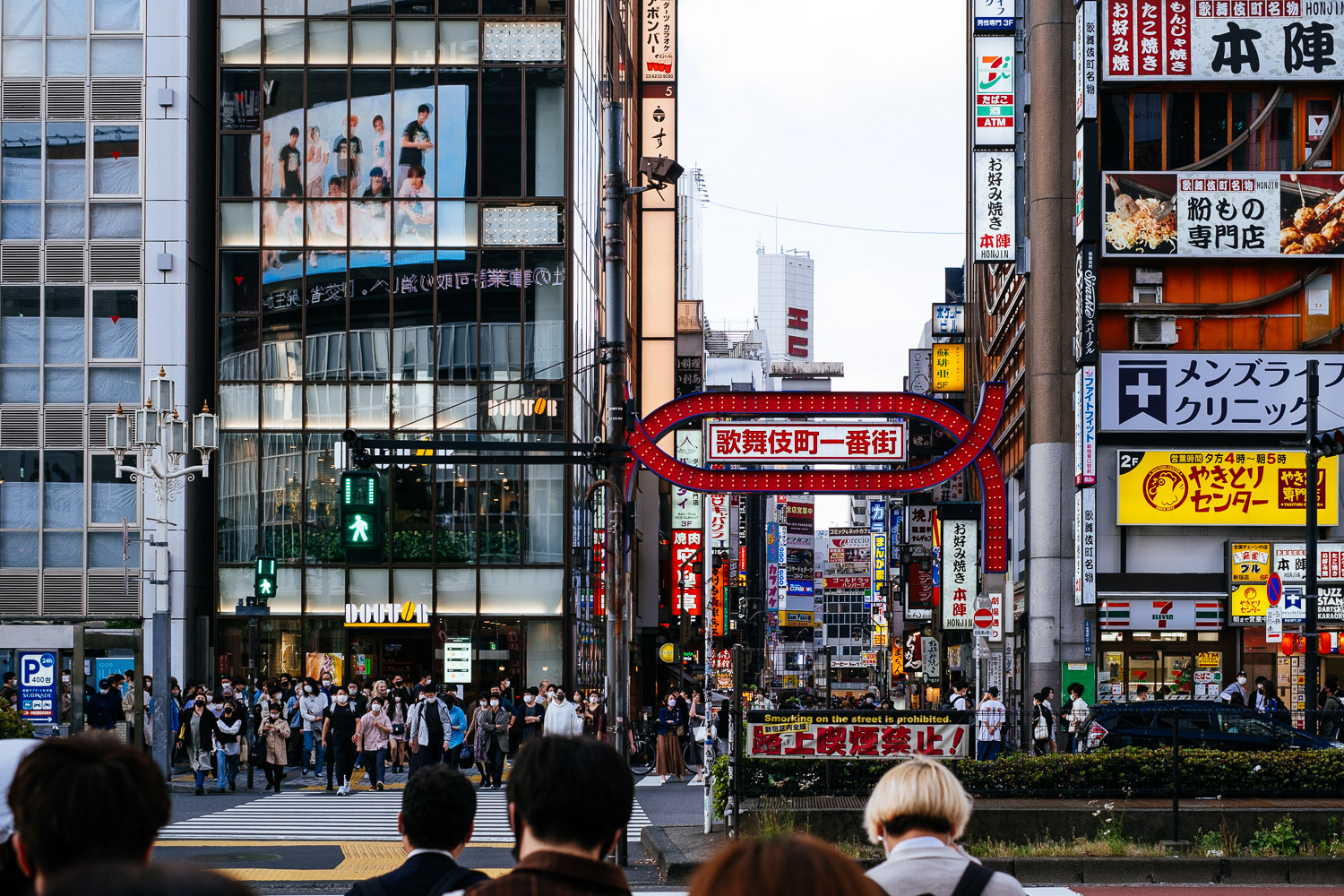 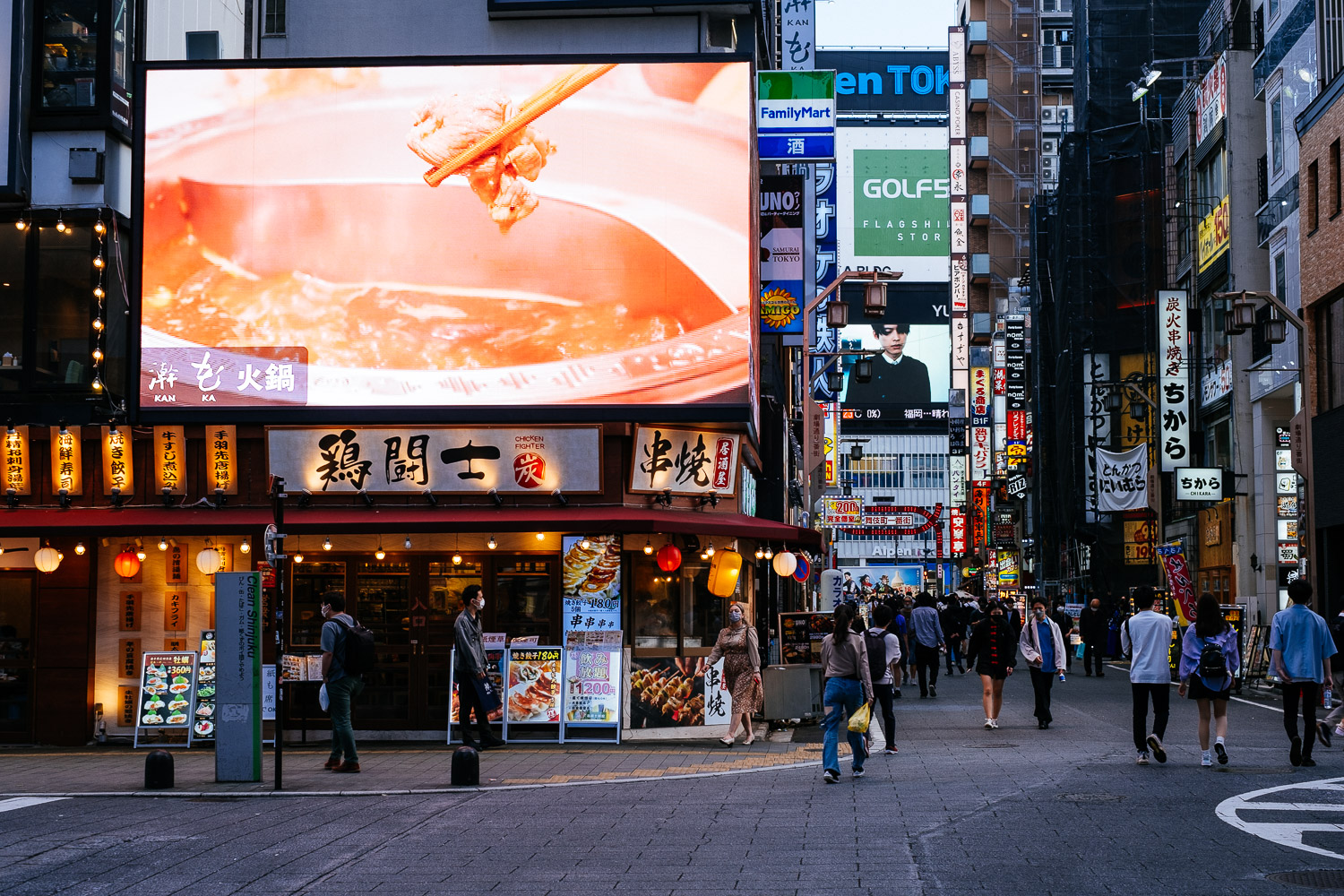 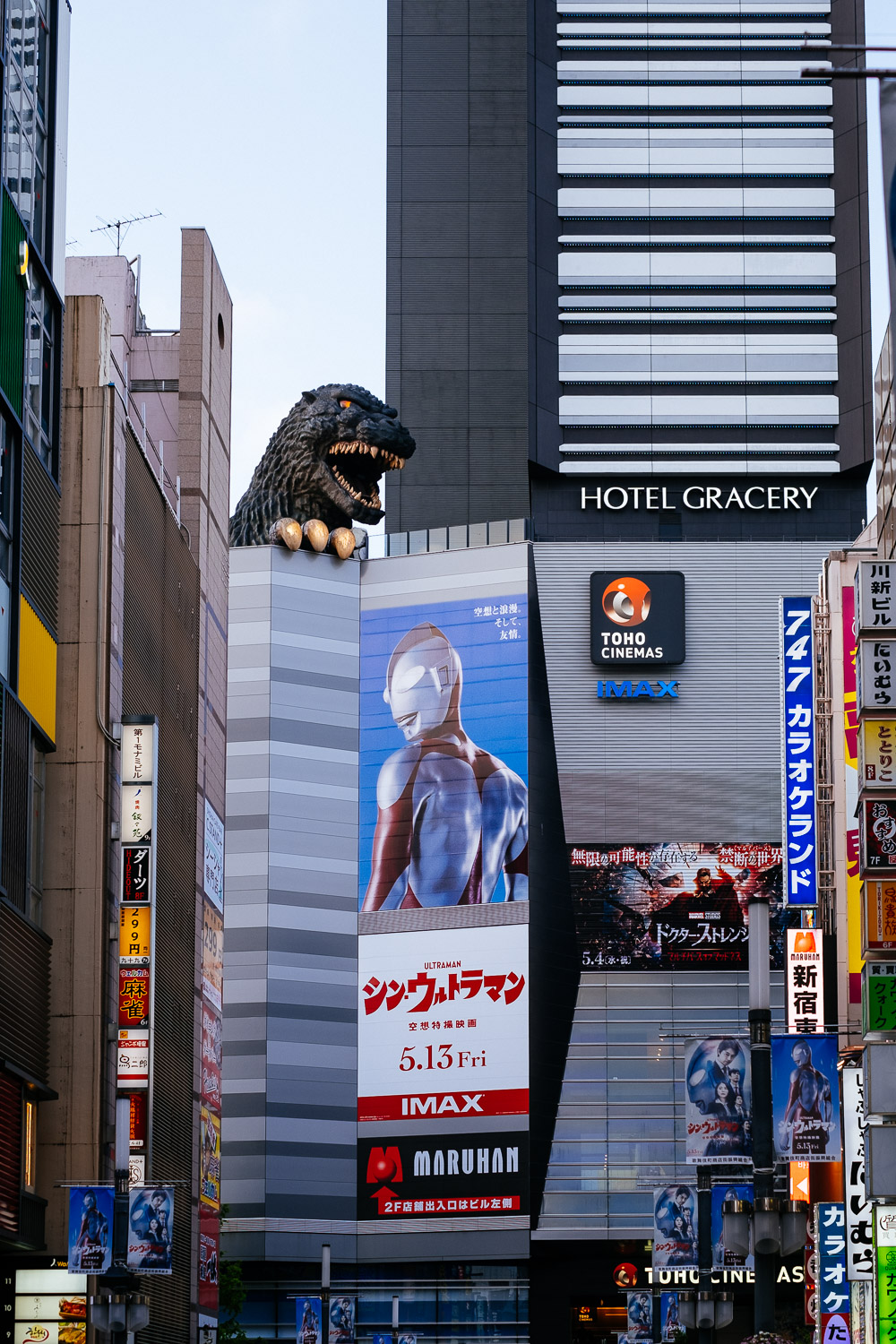 In the image above you can see Godzilla’s head atop the Toho building. I’ve always been a fan of Gorilla movies. I remember that I watched “The Terror of Mechagodzilla” in the old cinema in my hometown as a boy. Hell, I even like Roland Emmerichs Godzilla from 1998. I think it’s a perfect popcorn movie.

Brilliant! But now back to Tokyo and back to Fuji. This is my first trip with the X-Pro3 before that I shot with the X-Pro2 for almost 6 years. I was hesitant to get the X-Pro3 because of its rear screen design but I can now say that it doesn’t bother me at all and it doesn’t change the way I shoot the camera. A very important thing is that I can trust the autofocus  so there is no need to check focus on every image that I take.

On dpreview there are a lot of postings of people claiming that almost 40% of their images are out of focus and that it is almost impossible to get in focus shots with Fuji cameras. I have no idea where this comes from. I think the biggest advantage of mirrorless cameras is contrast AF. It might be a little slower than phase AF but it works. I also get the occasional out of focus shot but it is rare. I think it is maybe 1% or less. It’s still annoying but I think I now know when it happens. It mostly happens with reflective surfaces like metallic materials (paint of a car) or with sun reflections on the water. When it happens nothing in the image is in focus even in pictures taken with the 14/2.8 so I think focus goes beyond infinity. Again those are very rare cases but it still happens from time to time. But since so many seem to have trouble to get in focus shots here is what I do:

That’s it. There is no hunting at all. The 14/2.8 makes a quick sharp noise that I got so used to that I miss it when I shoot with the 23/2 or any other lens with a quiet focusing mechanism.

Important note: I never, ever focus and recompose. That technique simply doesn’t work especially with a fast lens shot wide open. My Canon 6D had only one cross sensor in the centre of the frame but now I got hundreds of AF points spread all over the frame so there is no need to focus and recompose.

And of course don’t try to focus on infinity or anything farther away than 5 meters when shooting with a wide angle lens simply because it makes no sense. It is just a chance for error because the camera fail to see clear structures and in addition you are shooting through too much air for no reason. Worst case the lens would focus beyond infinity to the extend that nothing in your shot is in focus.

With the 14/2.8 I simply focus on my subject which is usually not farther away than 3 to 5 meters. But even if my subject is a wheat field and the sky above I would not focus on anything farther away. Because if the 14/2.8 is focused on something 5 meters away everything from 2 meters to infinity will be in focus and that is if you shoot with an aperture of f2.8 for whatever reason. As you can see there is no reason at all to try to focus on some distant objects. 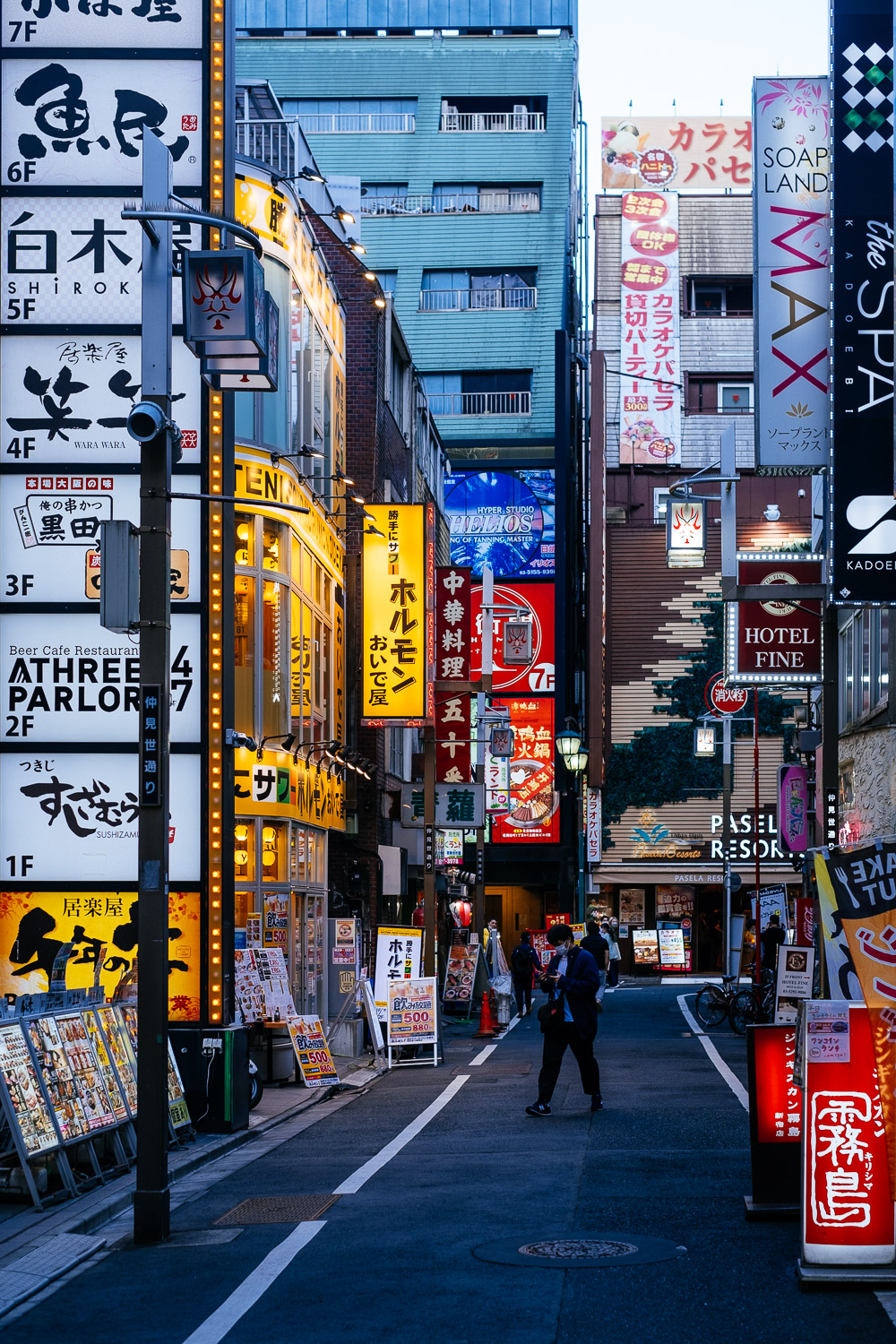 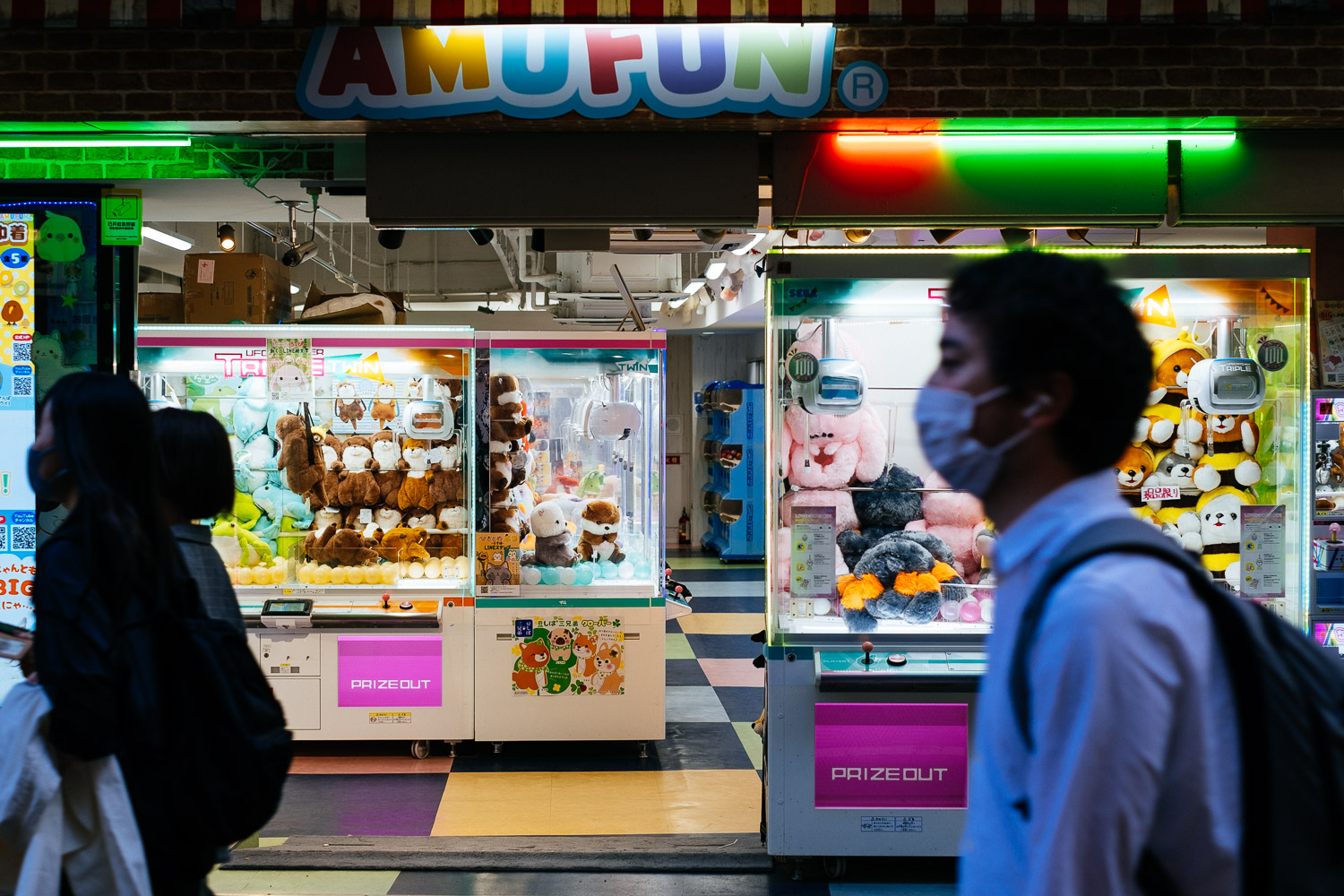 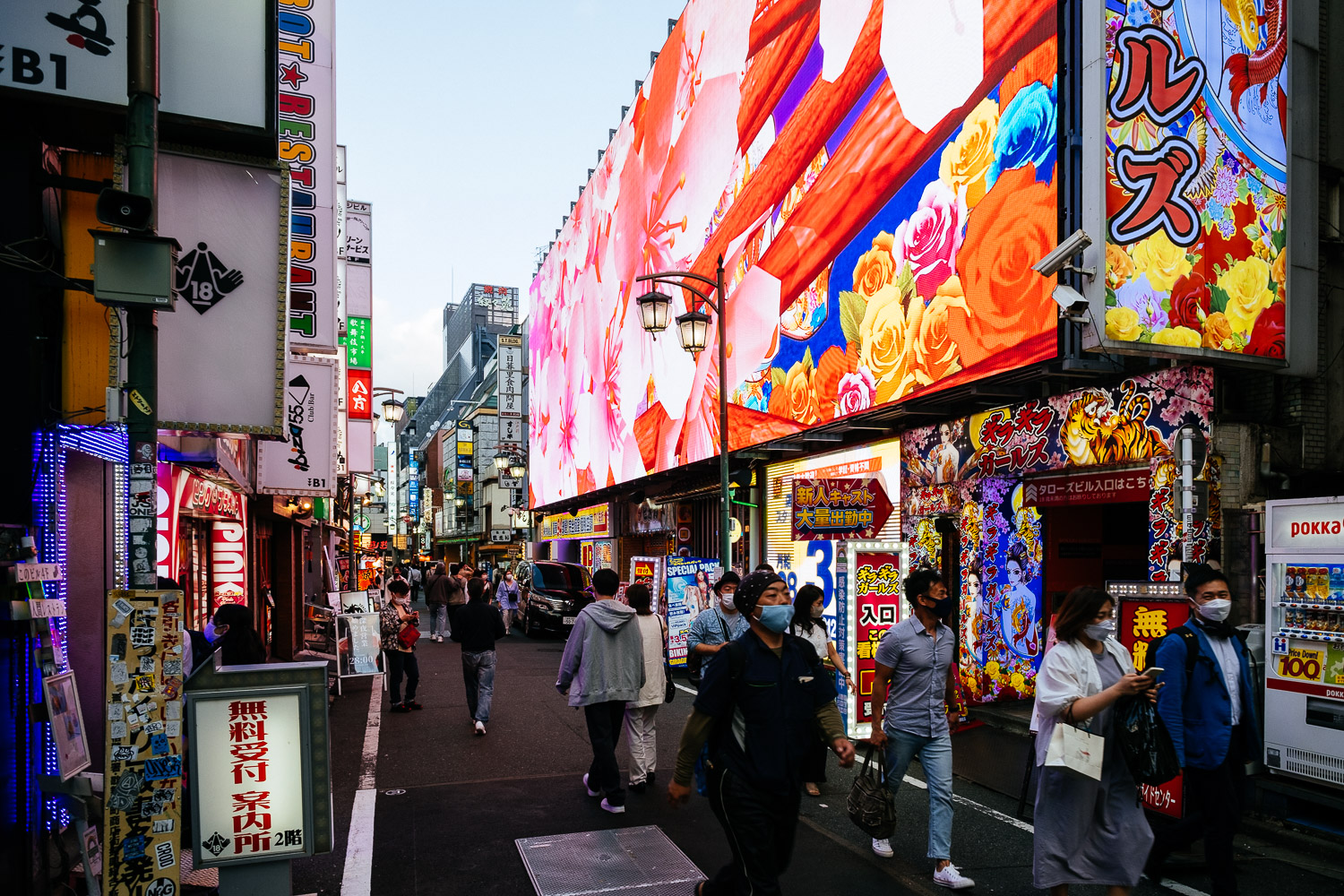 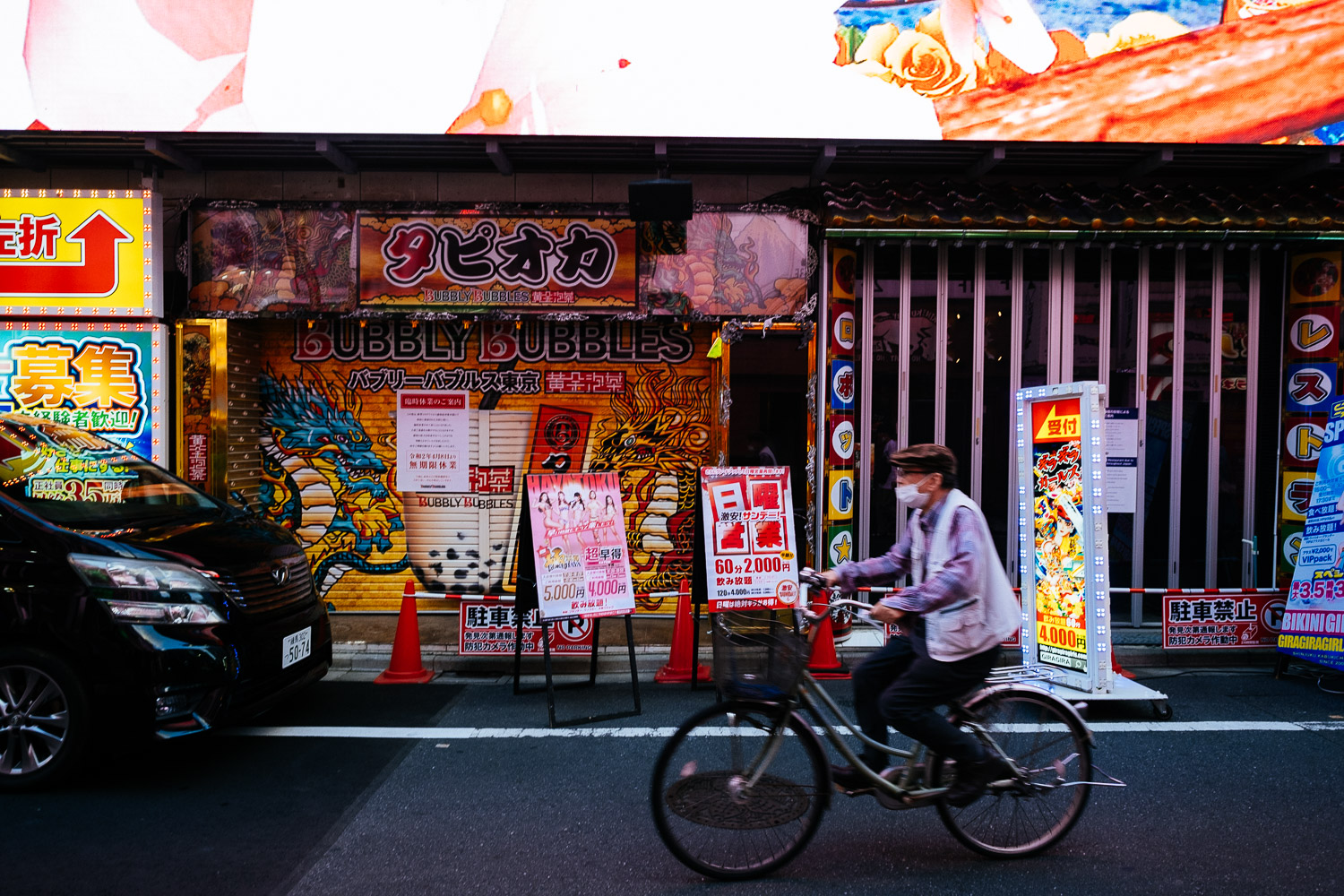 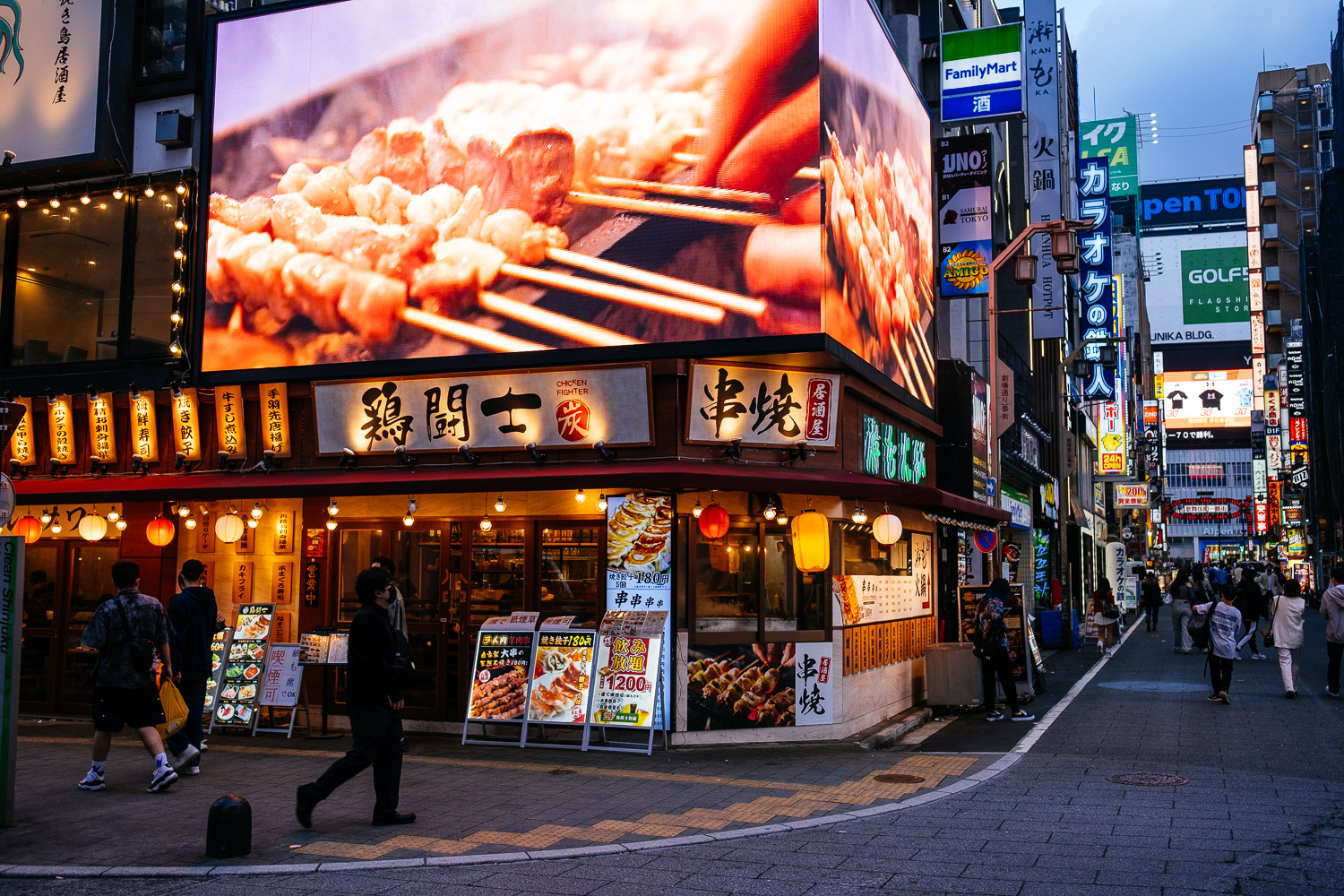 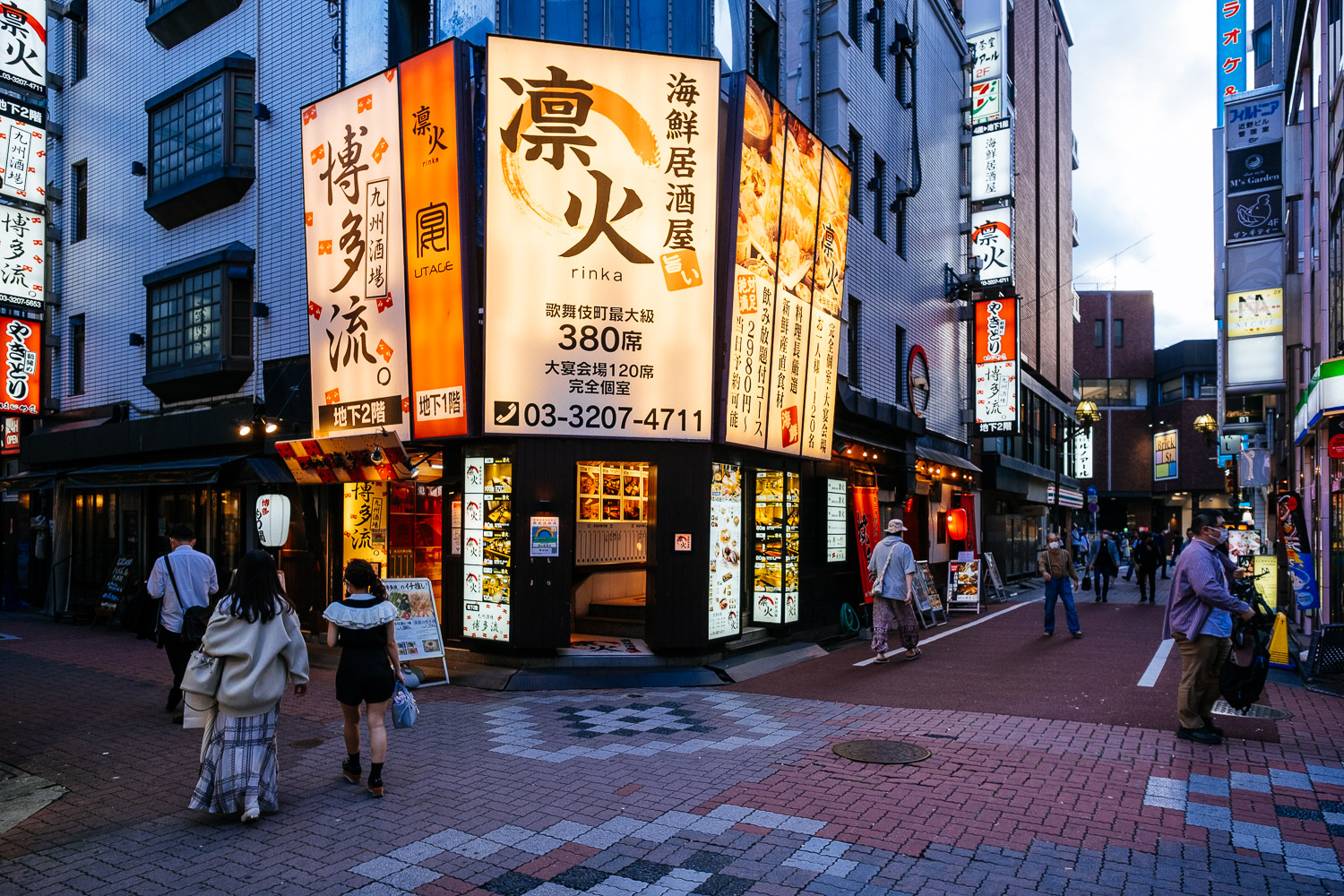 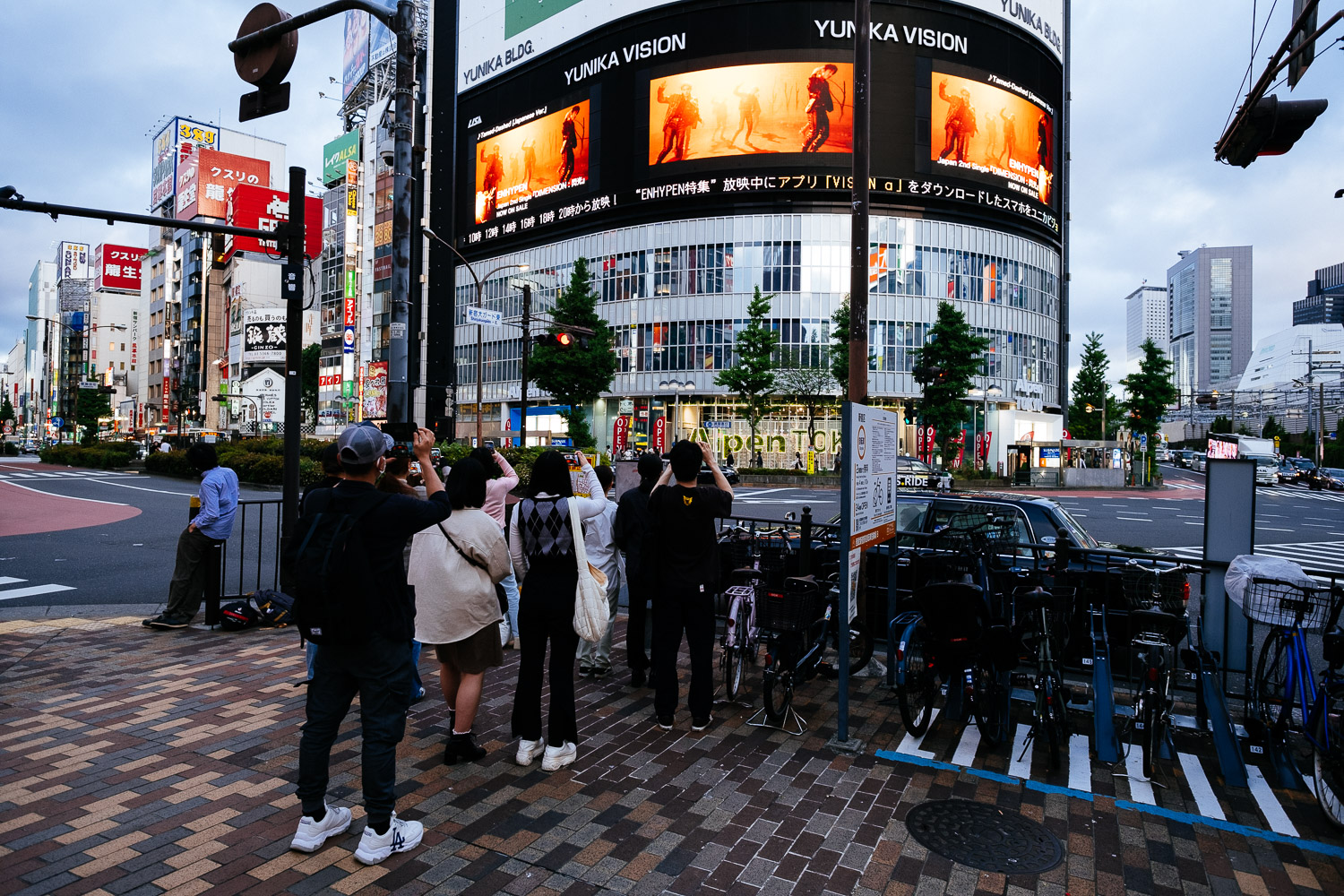 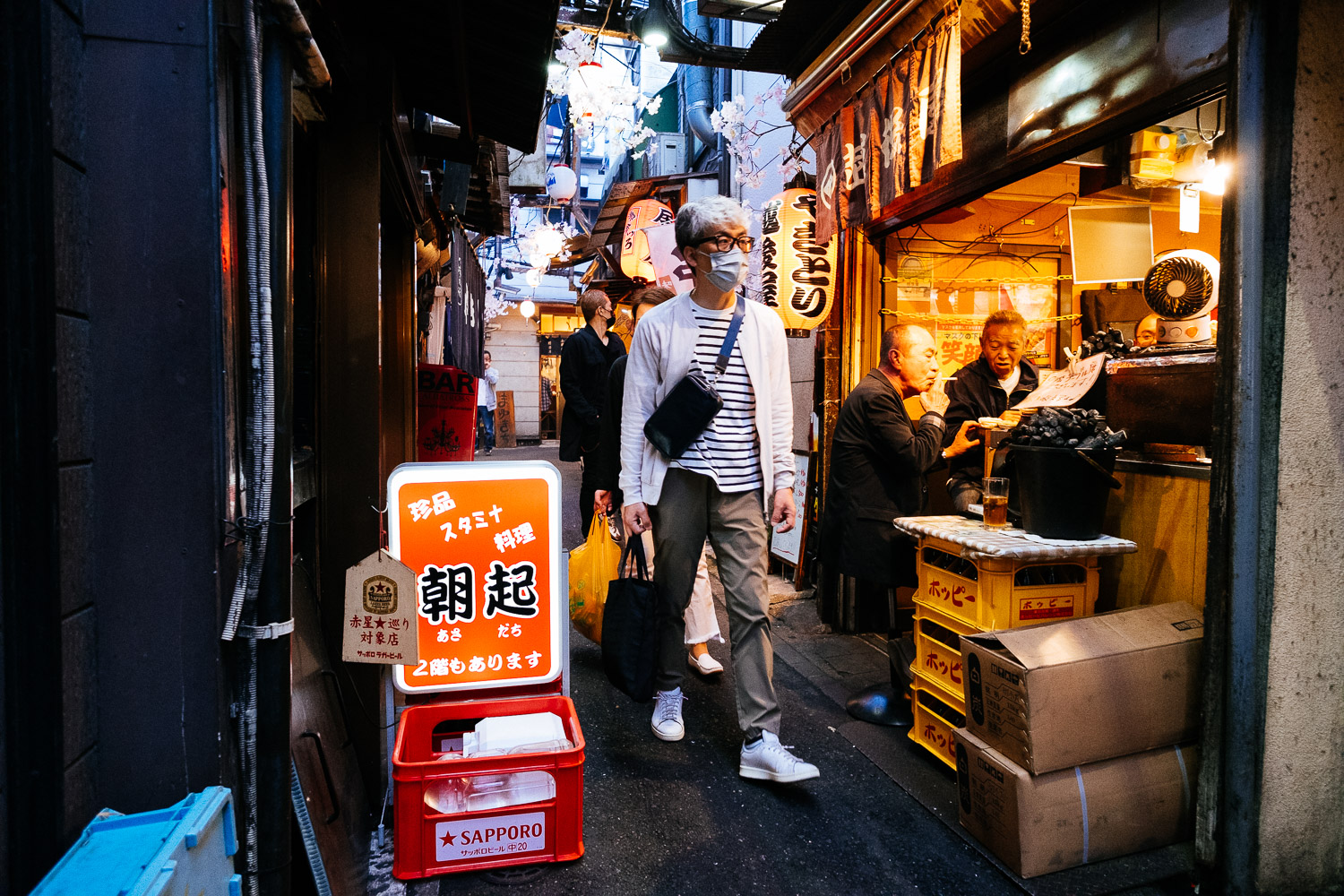 In the middle of my walk I finally switched to the 14/2.8 and occasionally to the 23/2. It is amazing what those three lenses can do. In the past I always traveled with three zoom lenses covering everything from super wide angle to tele. Of course it is nice to have the right focal length for every occasion but especially on city trips I prefer to keep it simple.

I replaced those three primes with the XF16-55/2.8WR on one trip to Korea just to see if that would work for me. The 16-55 almost covers the entire range and the image quality of that lens is brilliant too. And of course it would safe me the lens changes. At the end it didn’t work for me. The camera around my neck had become big and heavy while my empty camera bag felt like someone had stolen all my lenses. The zoom fogged up twice when getting out of my air conditioned hotel room into the hot and humid summer of Korea, my primes never did this. I think there is just too much lenses and heavy glass. 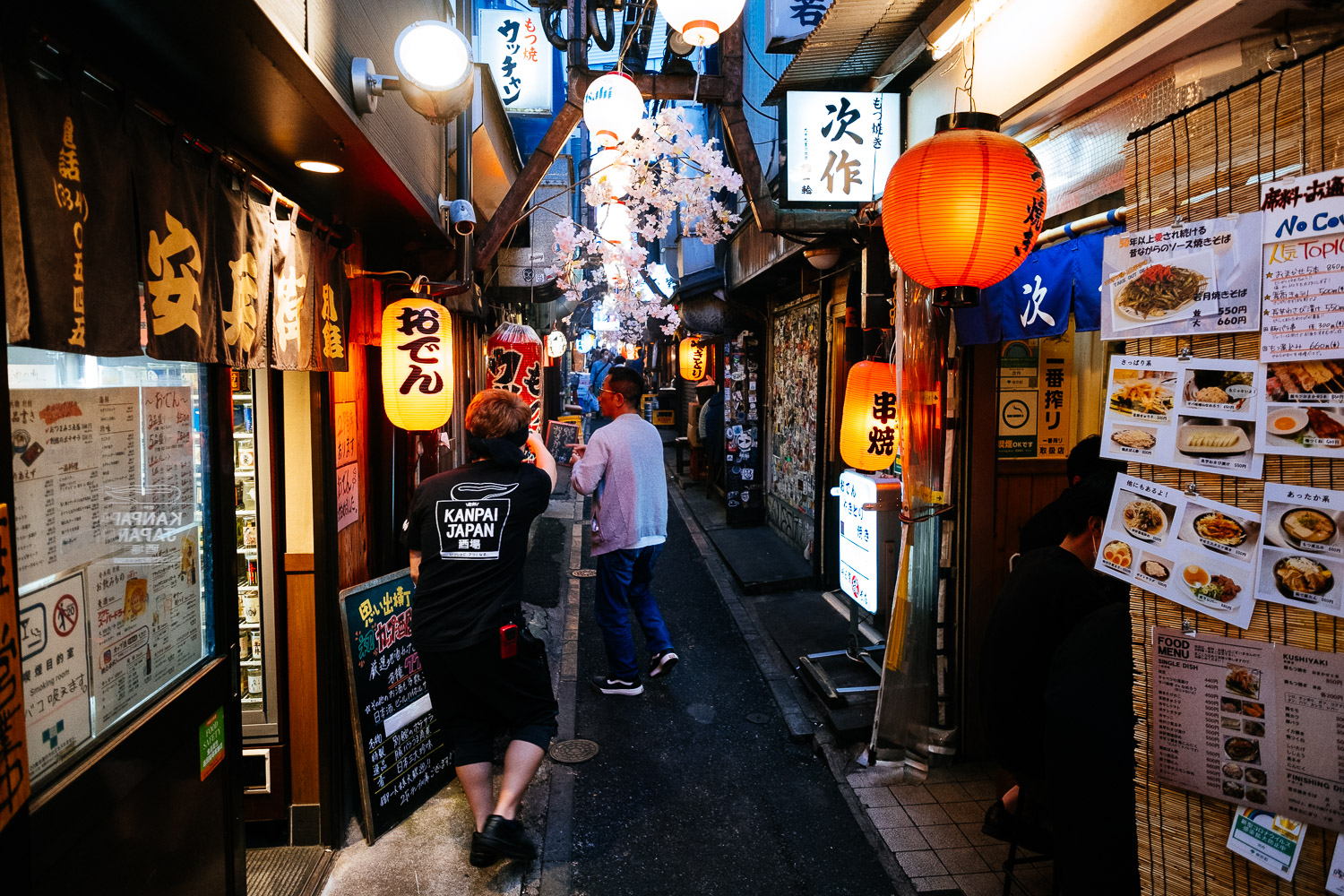 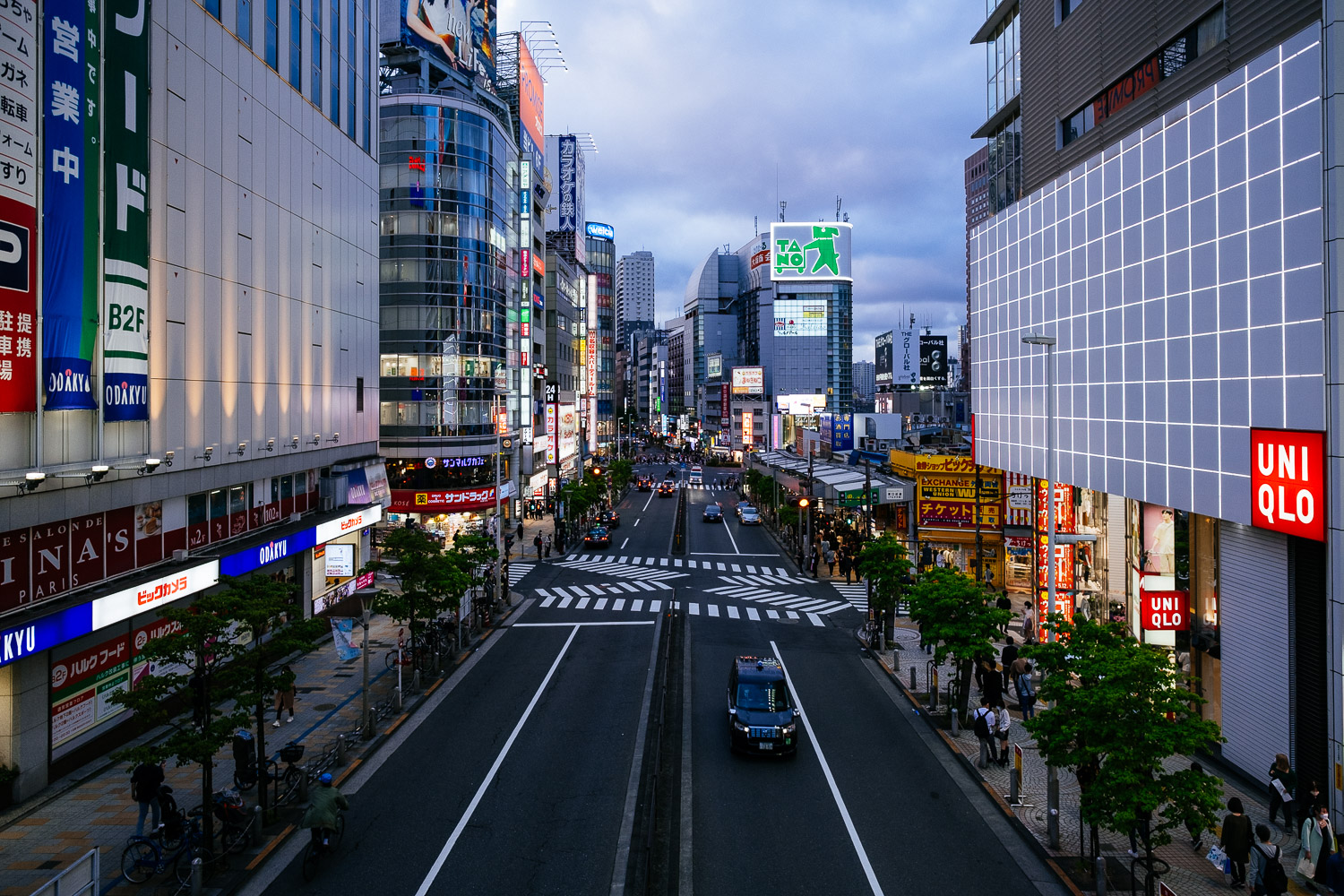 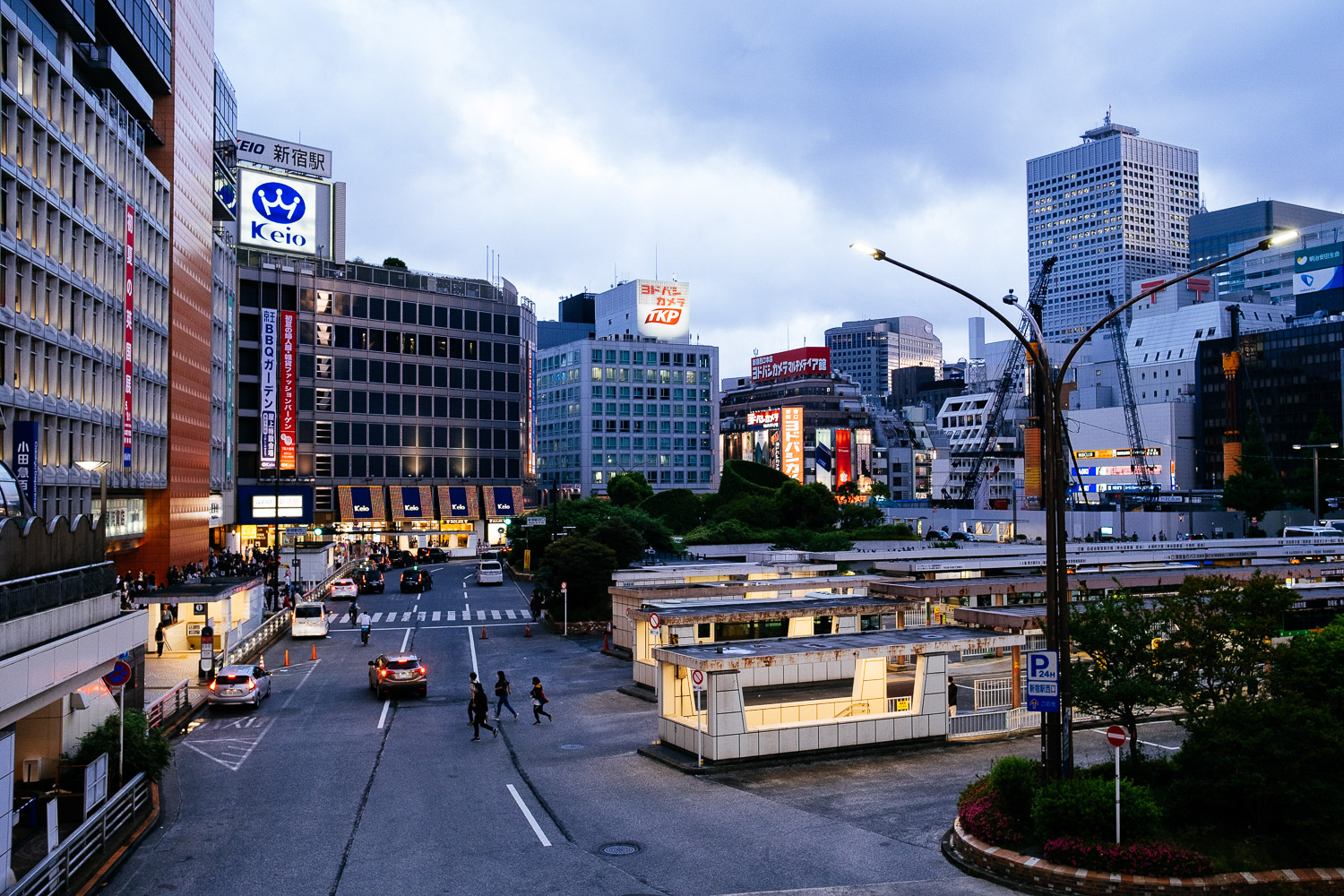 Beside the AF topic there is another myth regarding the importance of OIS or IBIS. It’s almost like you can’t take a picture without some kind of image stabilisation whether in the lens or in the camera. That of course is nonsense. Today all cameras offer excellent image quality even at very high ISO settings. So of course you can take super sharp images not only in broad day light but also in the evening or indoors. Just watch your shutter speed and you are fine. I’m not saying that OIS and IBIS is useless. I would love if the next X-Pro camera would have IBIS but only if size and weight remains the same.

But even if it would have IBIS it would not change much for me. Maybe I would set the minimum shutter speed to 1/30s instead of 1/60s in low light but anything longer would blur the people in my images too much. I would prefer IBIS over OIS and hope that future Fuji lenses will not have OIS. I always feel that OIS lenses are an optical compromise and of course there is one more thing that can break or malfunction.

When I finally was back in the area of my hotel again I walked my legs enough to compensate for the long flight. Time for dinner. 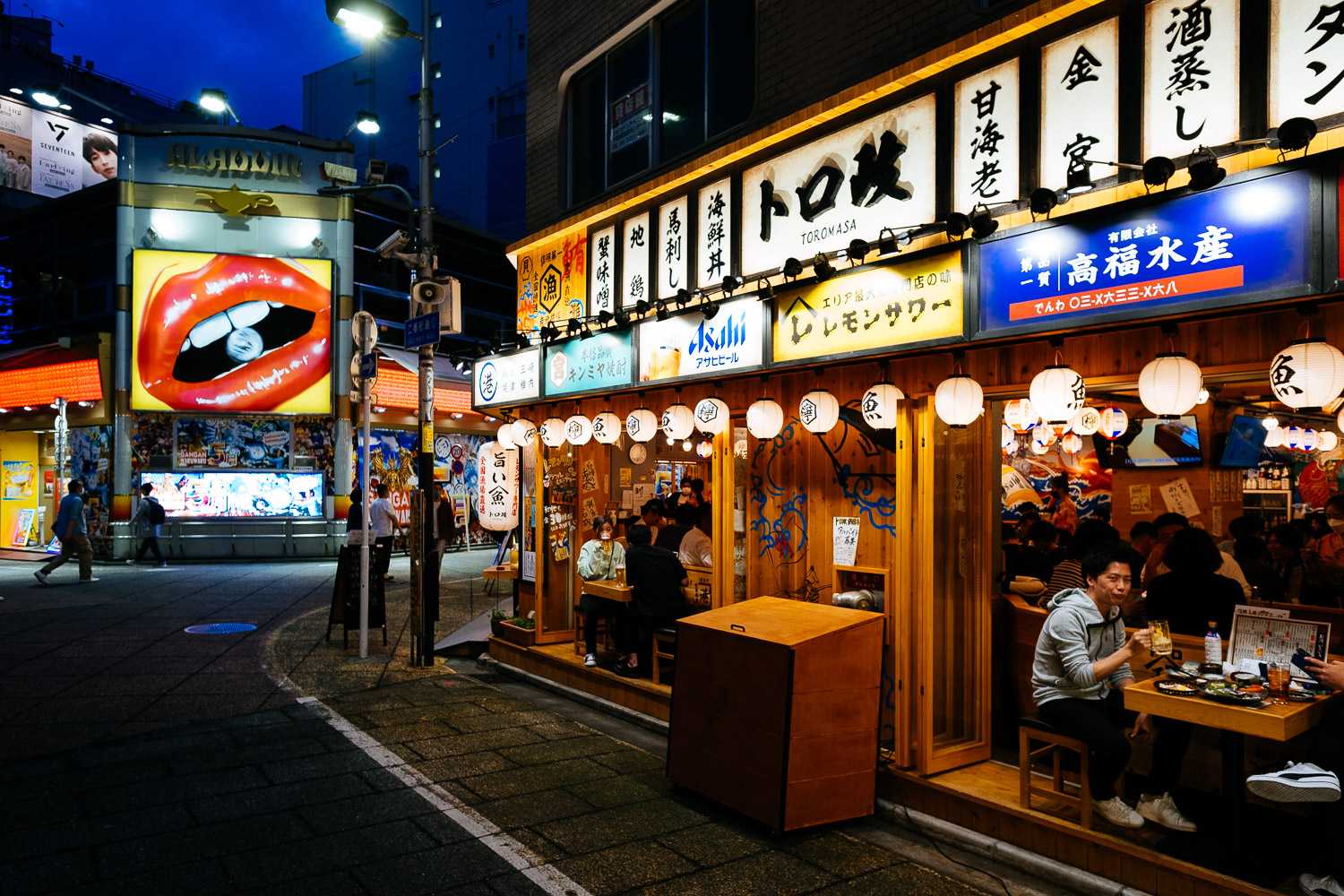