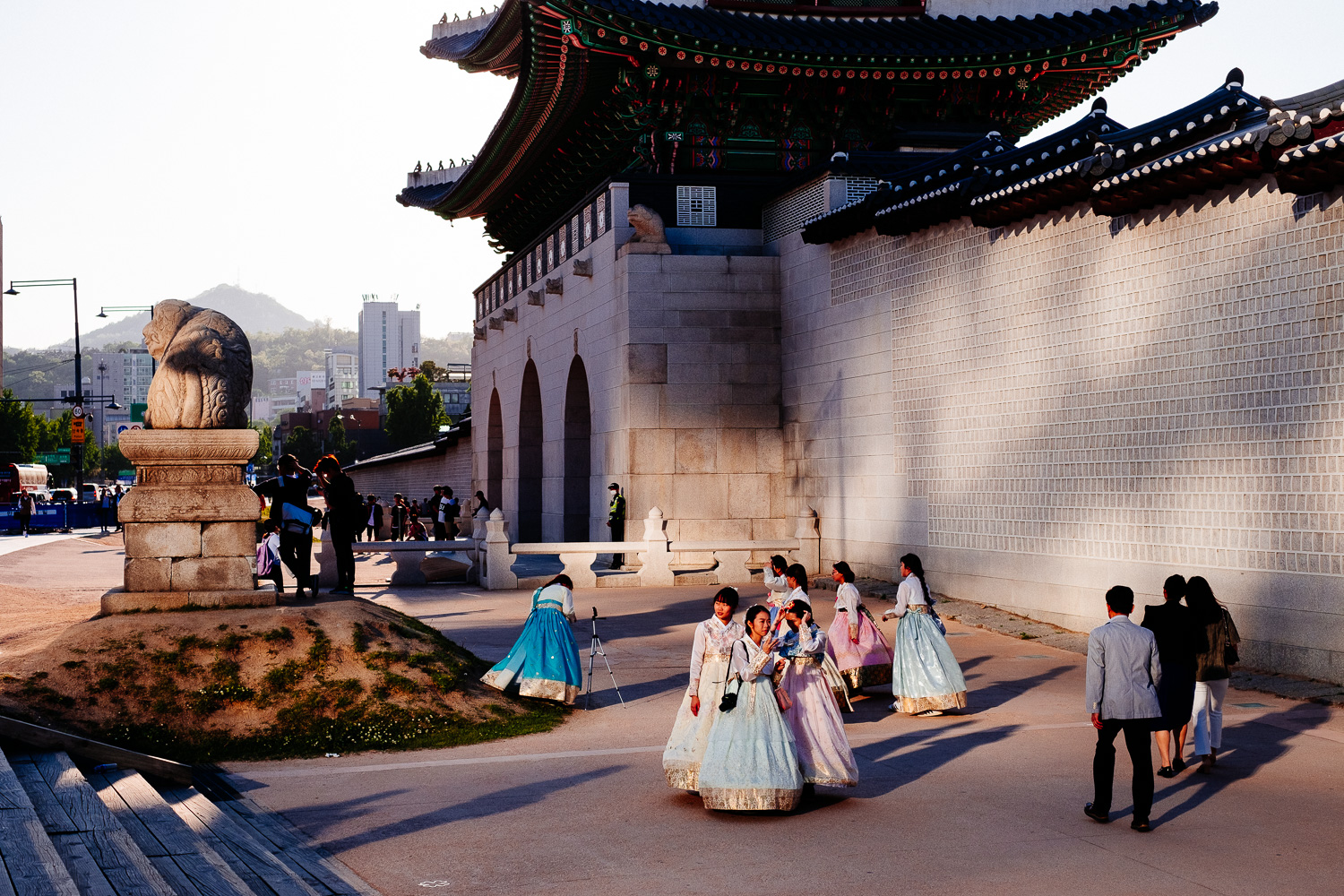 When I finally reached the “right” palace in Seoul the light was perfect but the doors closed. Not the only bad surprise that evening. 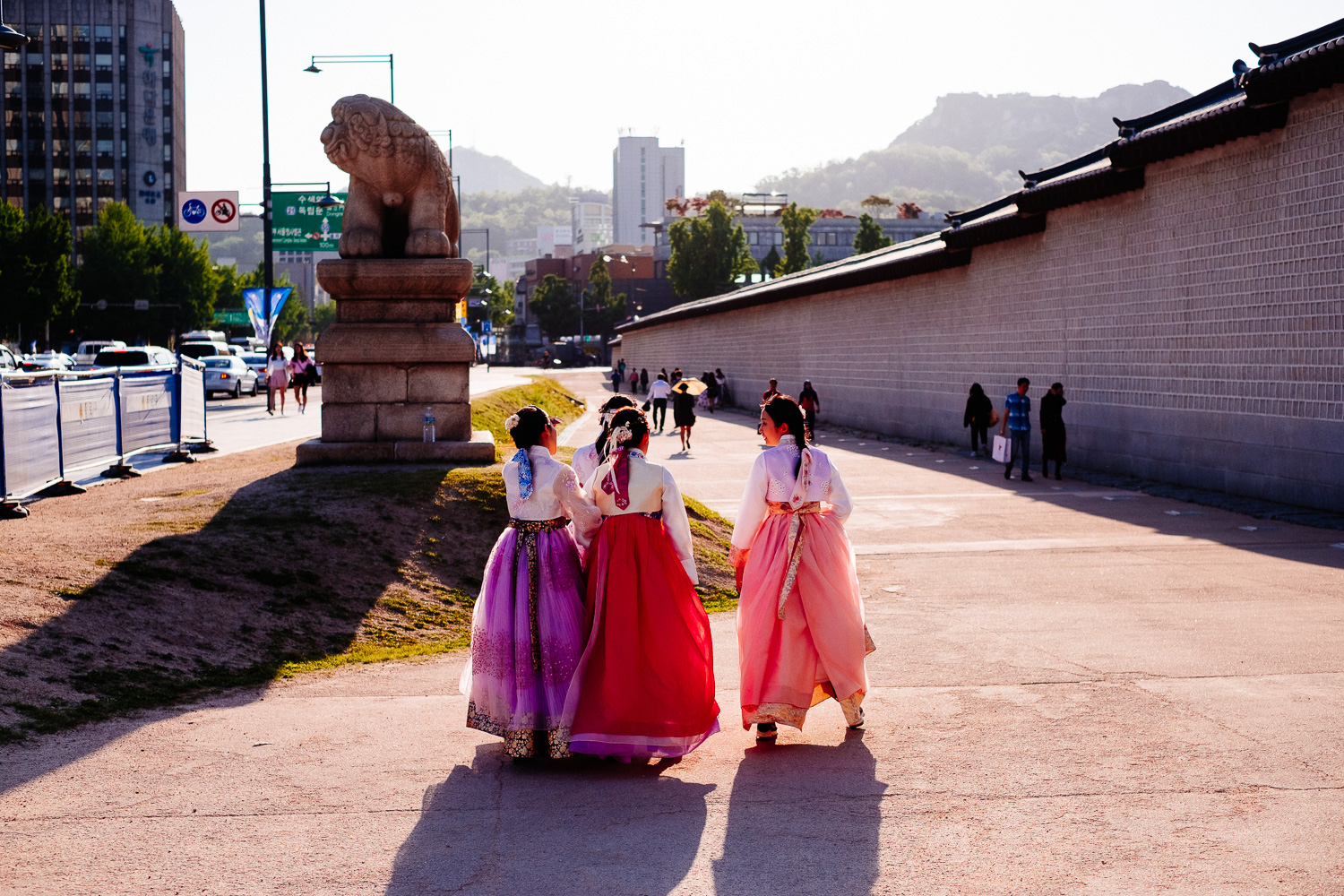 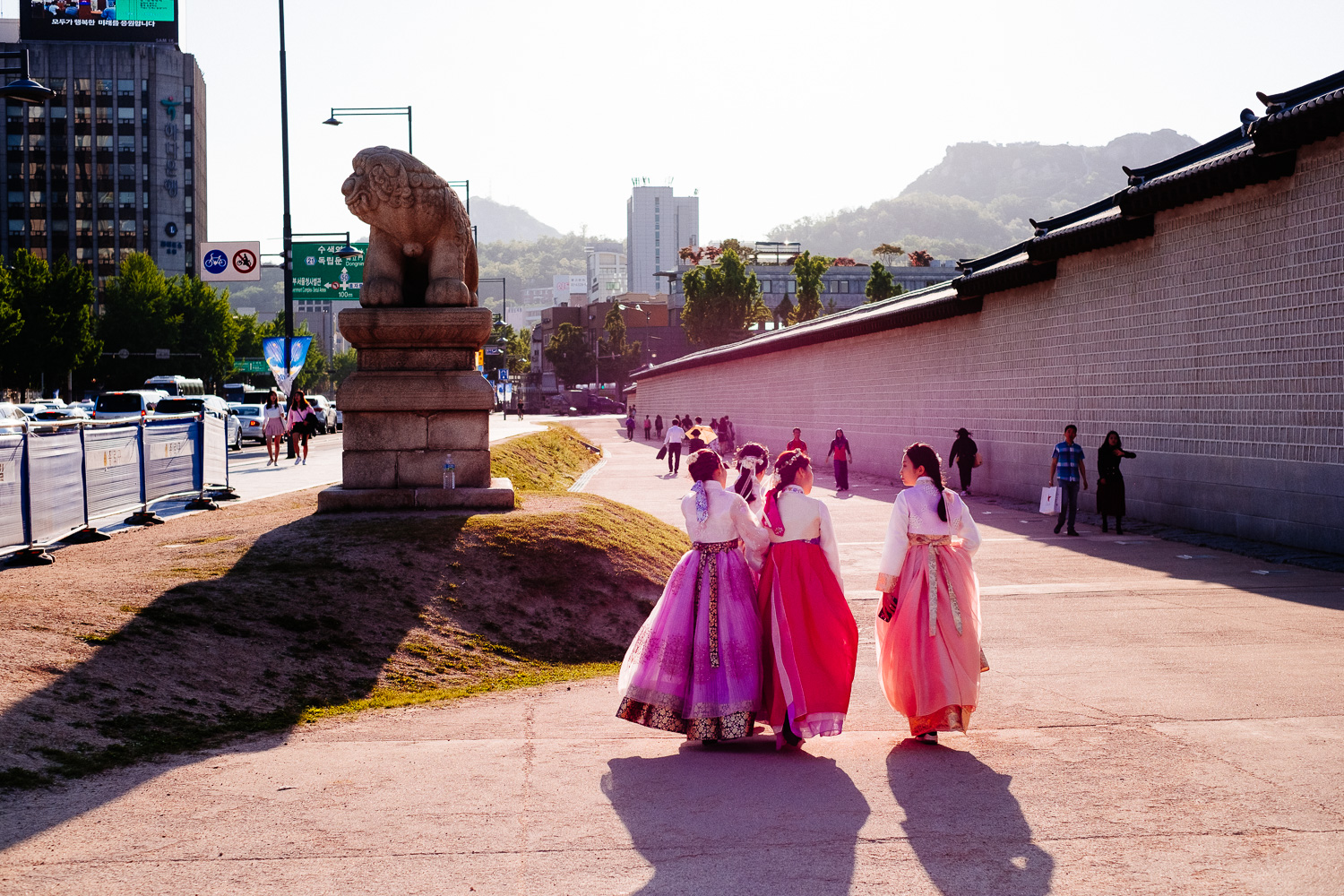 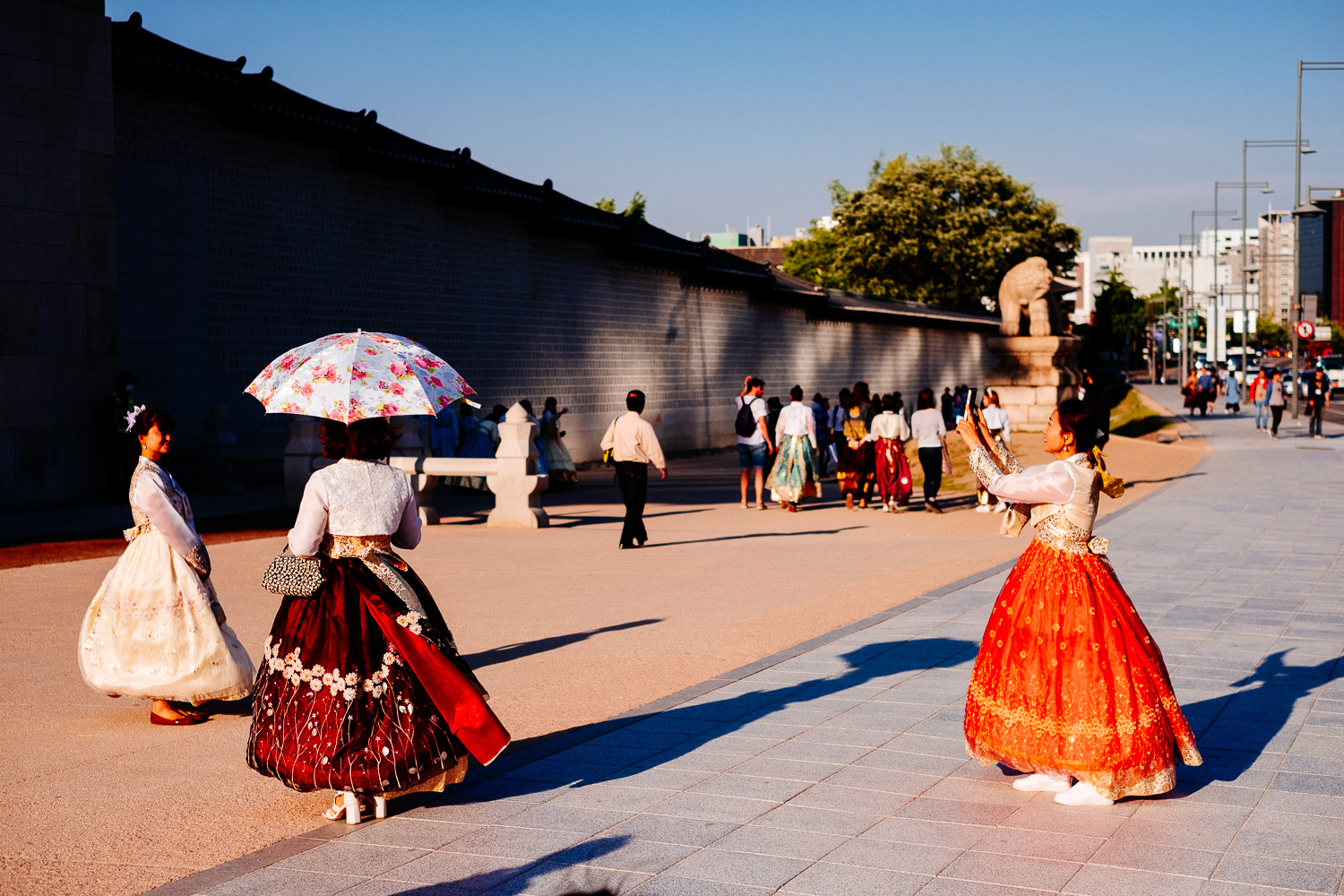 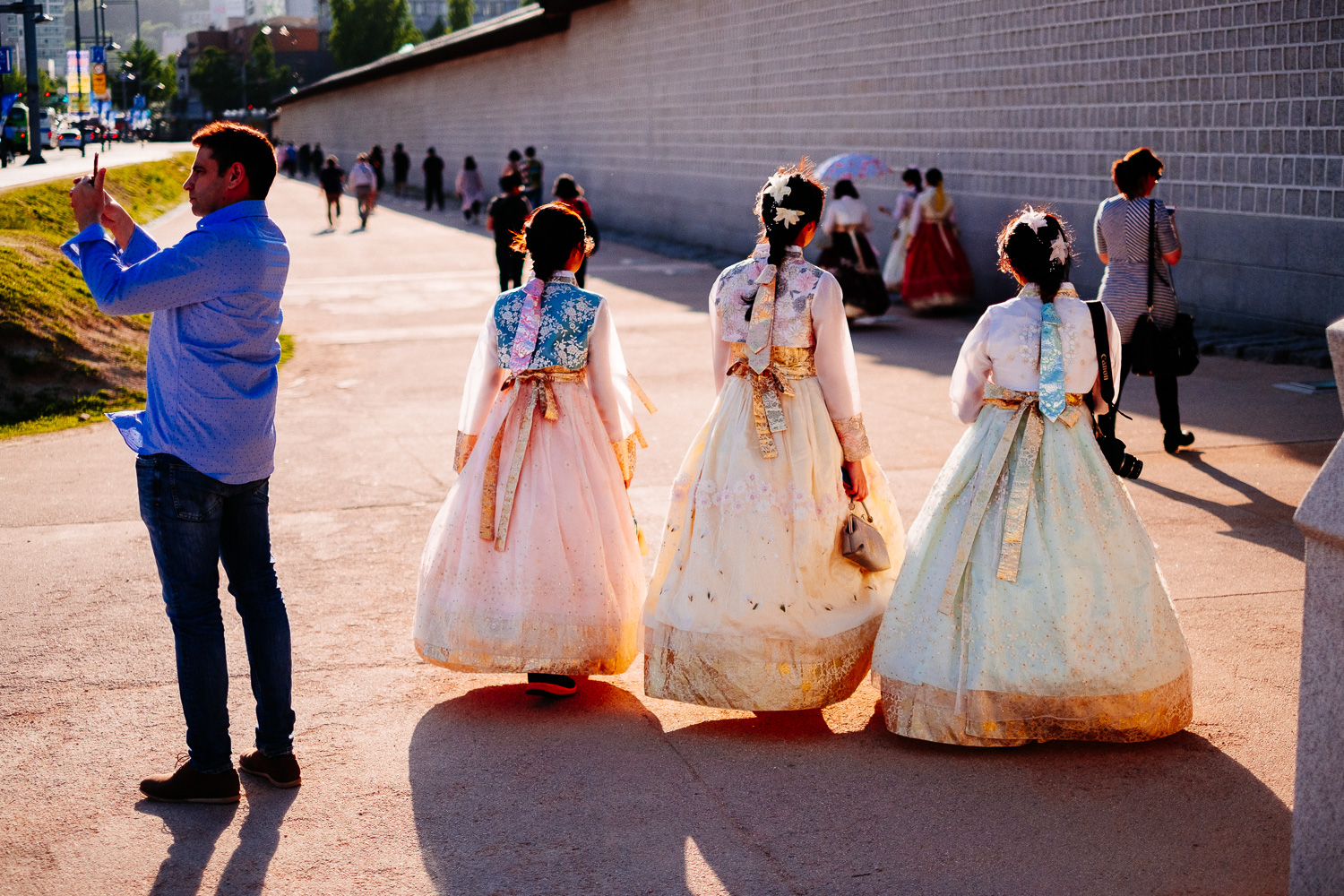 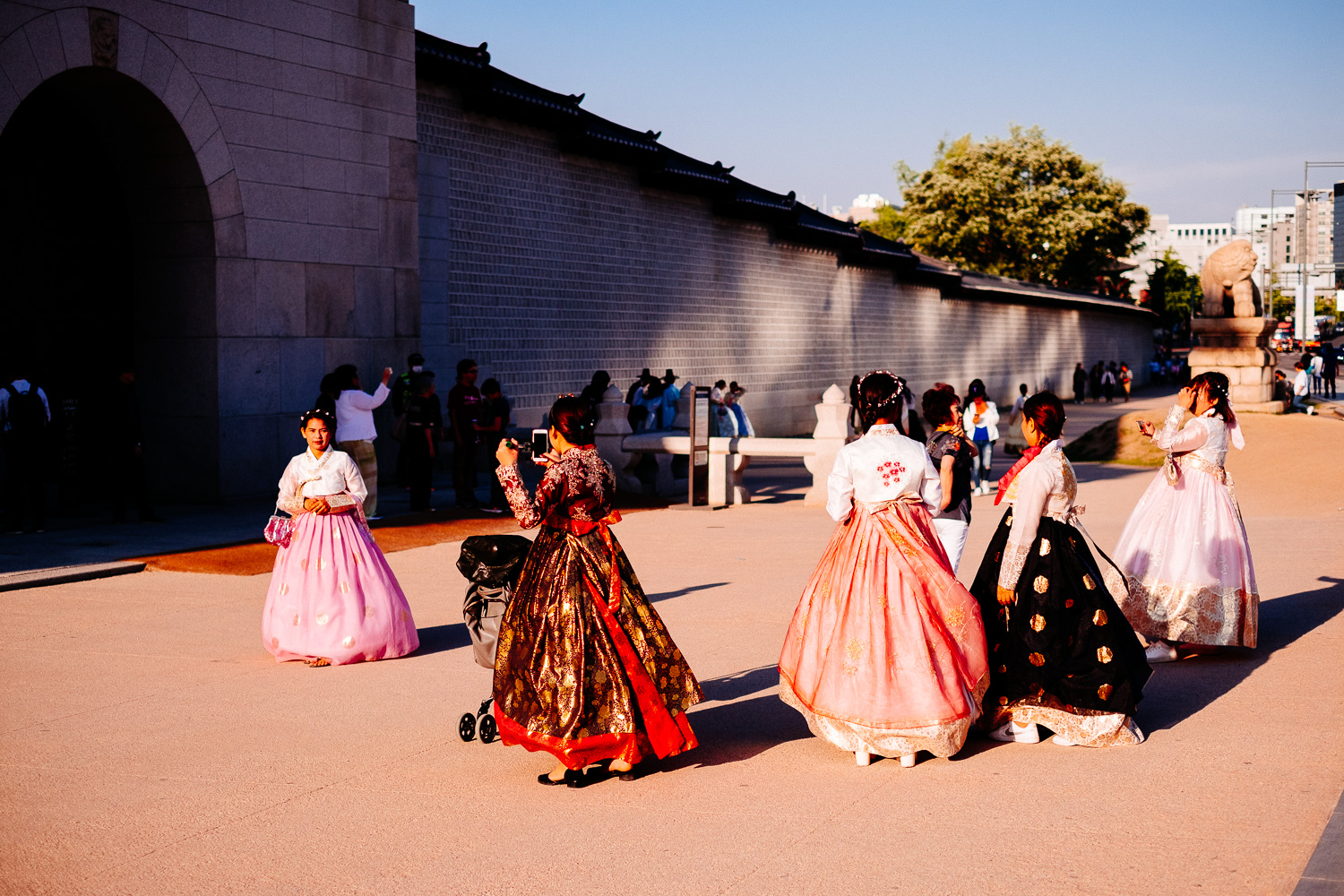 The light in front of the gate was really special. Already warm and soft but still very strong. Maybe that’s the reason why so many stayed after their visit to take some pictures of themselves. But I was on my own. My X Pro-2 is not suitable for selfies and the front camera of my iPhone is crap. So I decided to take pictures of the people around me. As they were occupied taking pictures I was unnoticed most of the time.

The girls in the traditional dresses looked beautiful and truly exotic. Thanks to google I know that those nice dresses are called Hanbok. If you guess that Hanbok means something fancy or romantic like “colourful flower of the rising sun” you are wrong. Hanbok literally means Korean clothing.

Seems that the Koreans are down-to-earth people. 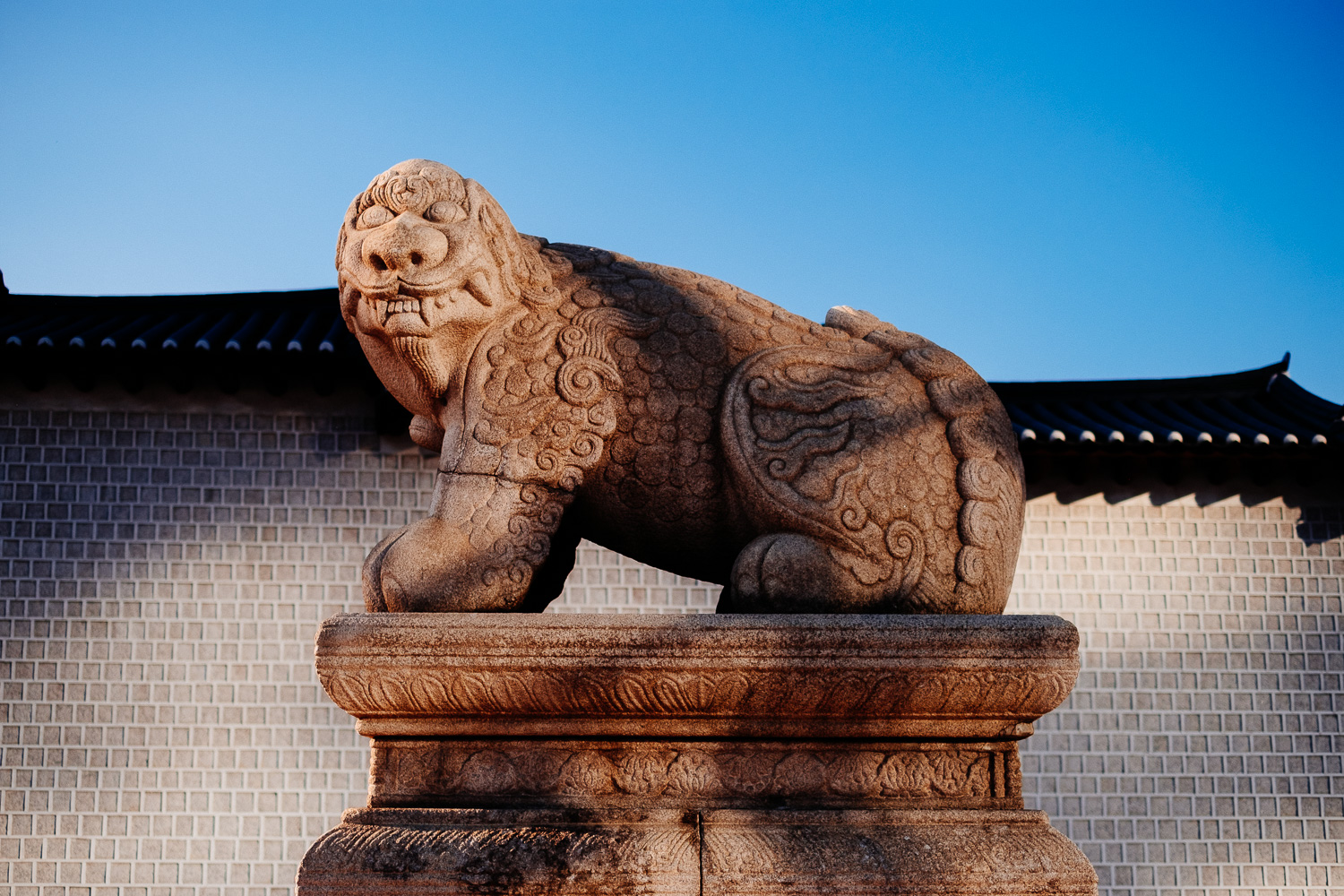 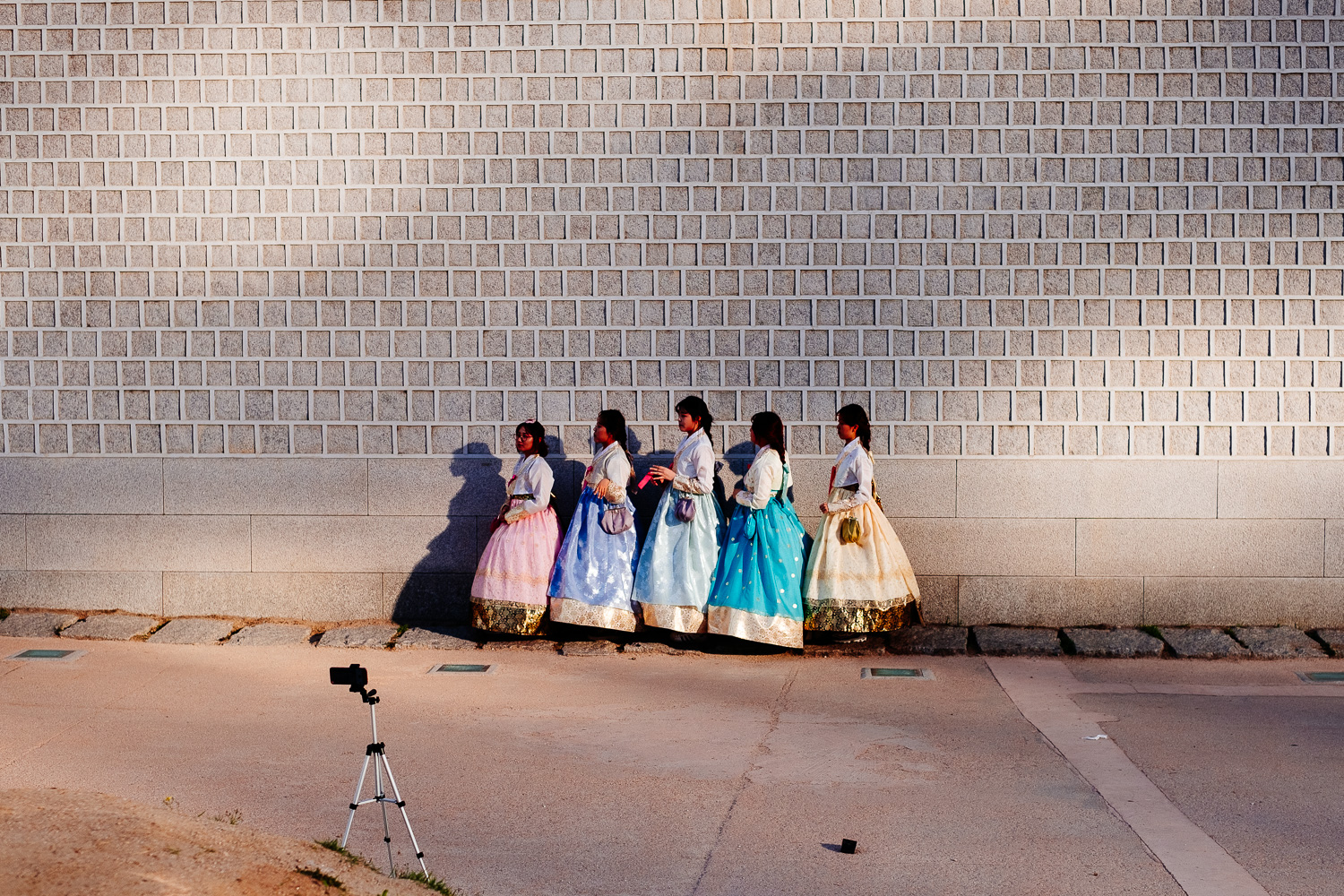 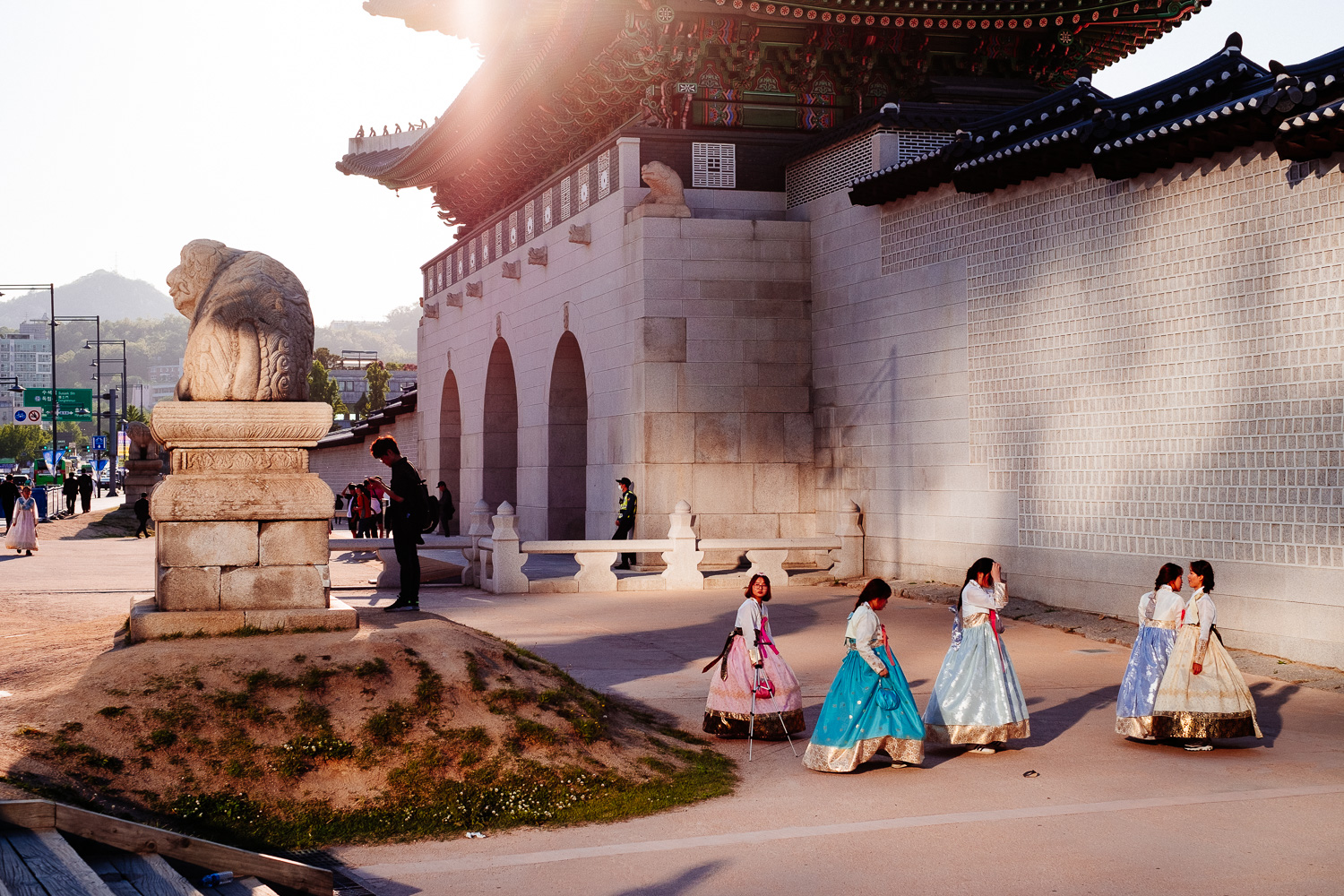 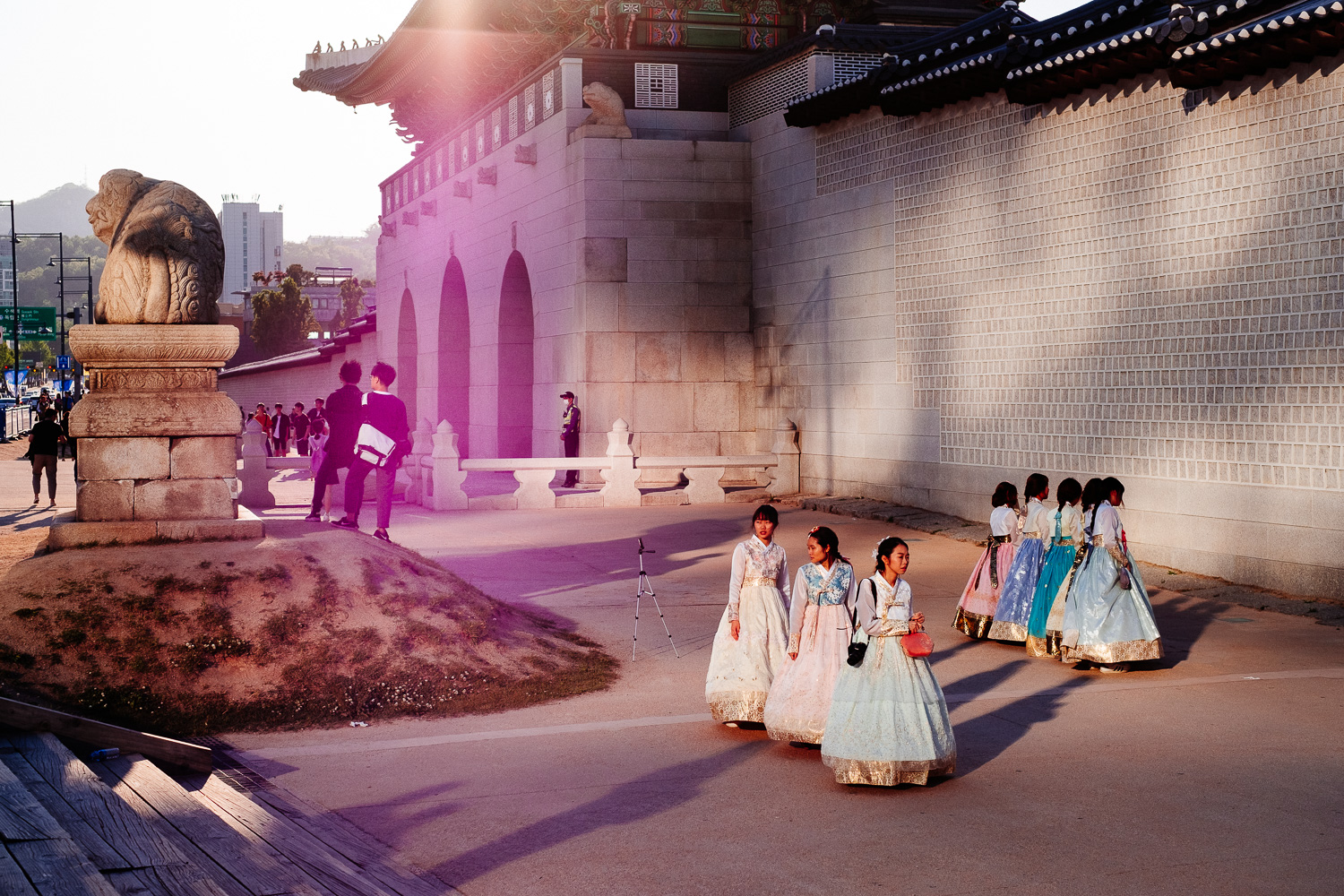 I noticed a slight purple cast when I looked through the viewfinder but I didn’t pay attention. I thought is was lens flare first since I was shooting straight into the still very strong sun. Even when I downloaded the shot on my laptop I thought it might be flair but when I “pixel peeped” I saw a strong purple grid that covers a good part of the left half of the frame. If you click on the crop below you can see the effect at pixel level. It almost looks like a newspaper print under a strong magnifying glass.

Now I finally managed to have an image ruined by this known effect. It is well known and here is a great article I found on the net in case you want to know the details. It also explained why the flare is purple. It is in fact not purple but anti-green which is a result of the X-trans sensor.

But if you skipped straight to the conclusion you read that there is nothing you can do against it. So what to do? Is it time to panic? Time to sell my camera?

I don’t think so. Of course I don’t like it. It is definitely not a feature – it’s a bug. Something that can’t be cured with a simple firmware update. It’s a behaviour that is caused by the design of the sensor. There is nothing that we can do. Should we avoid to shoot into the sun? Definitely not! It’s a great thing to shoot into the sun. I especially love it for portraits and with the increased dynamic range of modern sensors it gives great results.

How to avoid to loose images? Simply pay attention to what you see in the EVF. The effect is clearly visible. When you see purple flare in the EVF a very slight change in the angle of the camera is all it takes to make it disappear. I took a lot of shots that evening and this is the only one that exhibits this effect. Actually this is the first shot that I have lost because of this behaviour and I took more than 10.000 images since I switched to the X Pro-2! In short: The problem is real, it’s caused by the sensor design but it will very unlikely have any effect to your photography in real life.

When I uploaded the images for this blog post I realised that I shot all images of the series with the XF 35/1.4 R. A lens that I almost sold before I got the X Pro-2. AF was slow and I lost a lot of spontaneous shots. I’m glad that I didn’t sell it. The X Pro-2 breathes new life into this lens which is one of Fuji’s best when it comes to character.

I know that character usually is just another way to say that something is good but has some serious flaw too. It’s hard to describe but the images taken with the 35/1.4 just have that special something and I’m not talking about wide open images only. And there is no flaw if you use one of Fuji’s latest camera bodies. Unlike the 23mm lenses there is practicably no weight penalty if you chose the f1.4 version over the slower version. 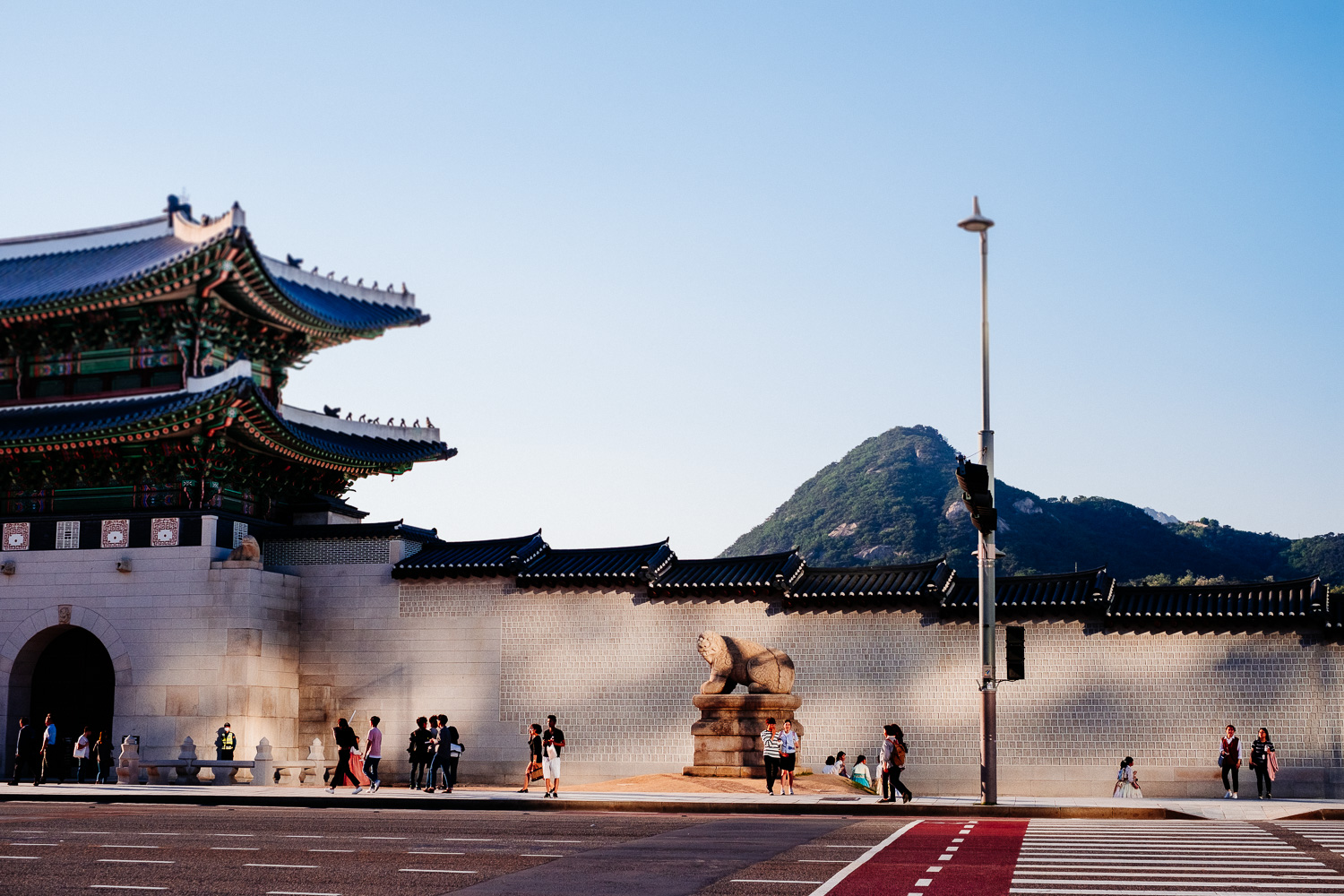