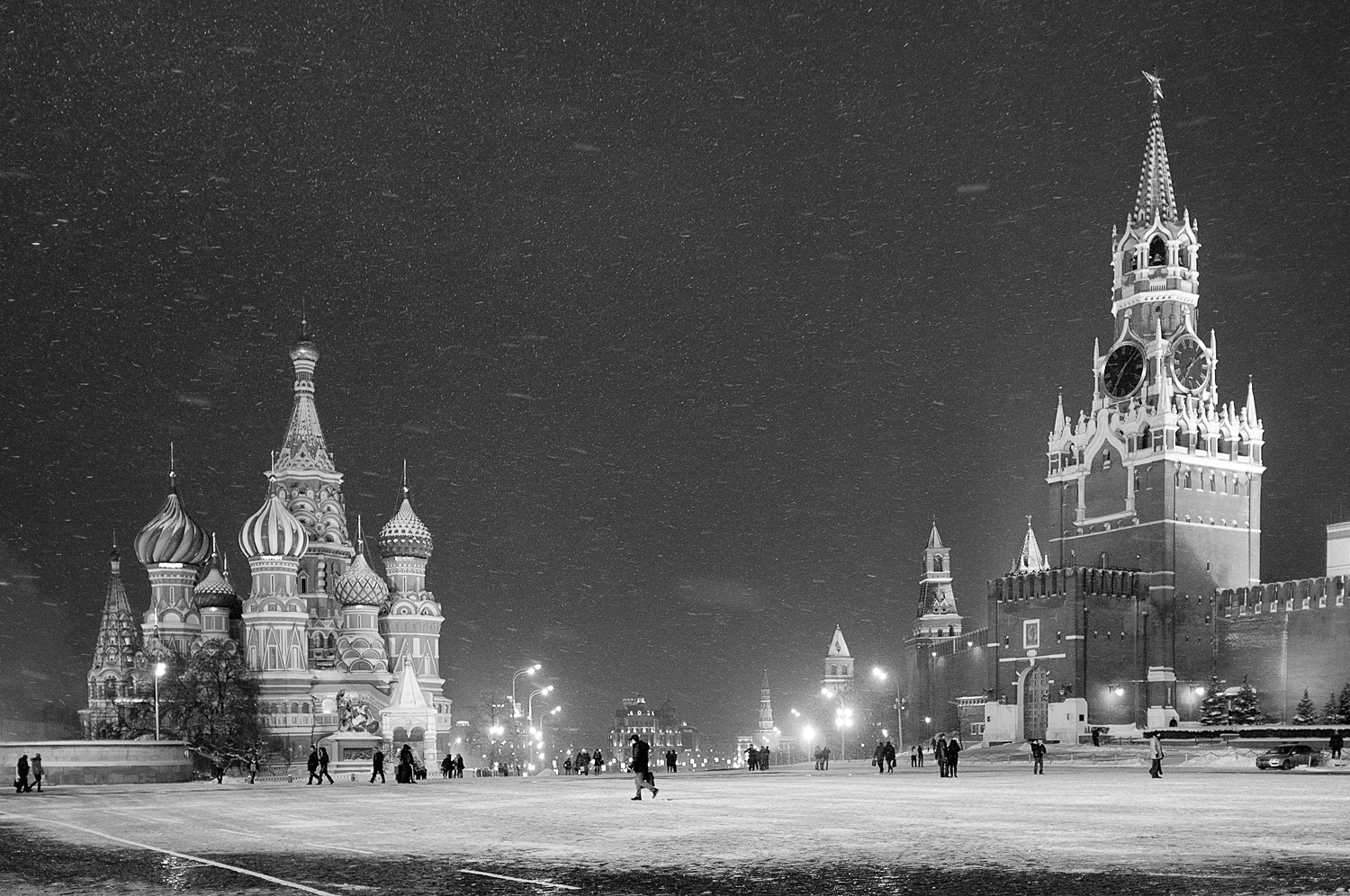 The most important factor in traveling photography is: Luck! I have been to Moscow a couple of times before in the winter but it was always too warm thanks to global warming. I think I have said that already. But it fits as this post is the second part of “Blue Hour At The Red Square” I posted about two weeks ago. It was the third night in Moscow. St. Valentin’s day. When I woke up in the morning I knew it was going to be a good day. Finally it was snowing in Moscow!

Right after the second day of our sales meeting I jumped out of the hotel to go to the red square. This time I got the chance to see it covered in snow and what can I say: It’s magical! My colleague, who was raised in Moscow, was less impressed mostly because he hates cold weather. He went straight into the GUM ( the large shopping center at the red square ) to have a coffee while waiting for the crazy guy with the camera. 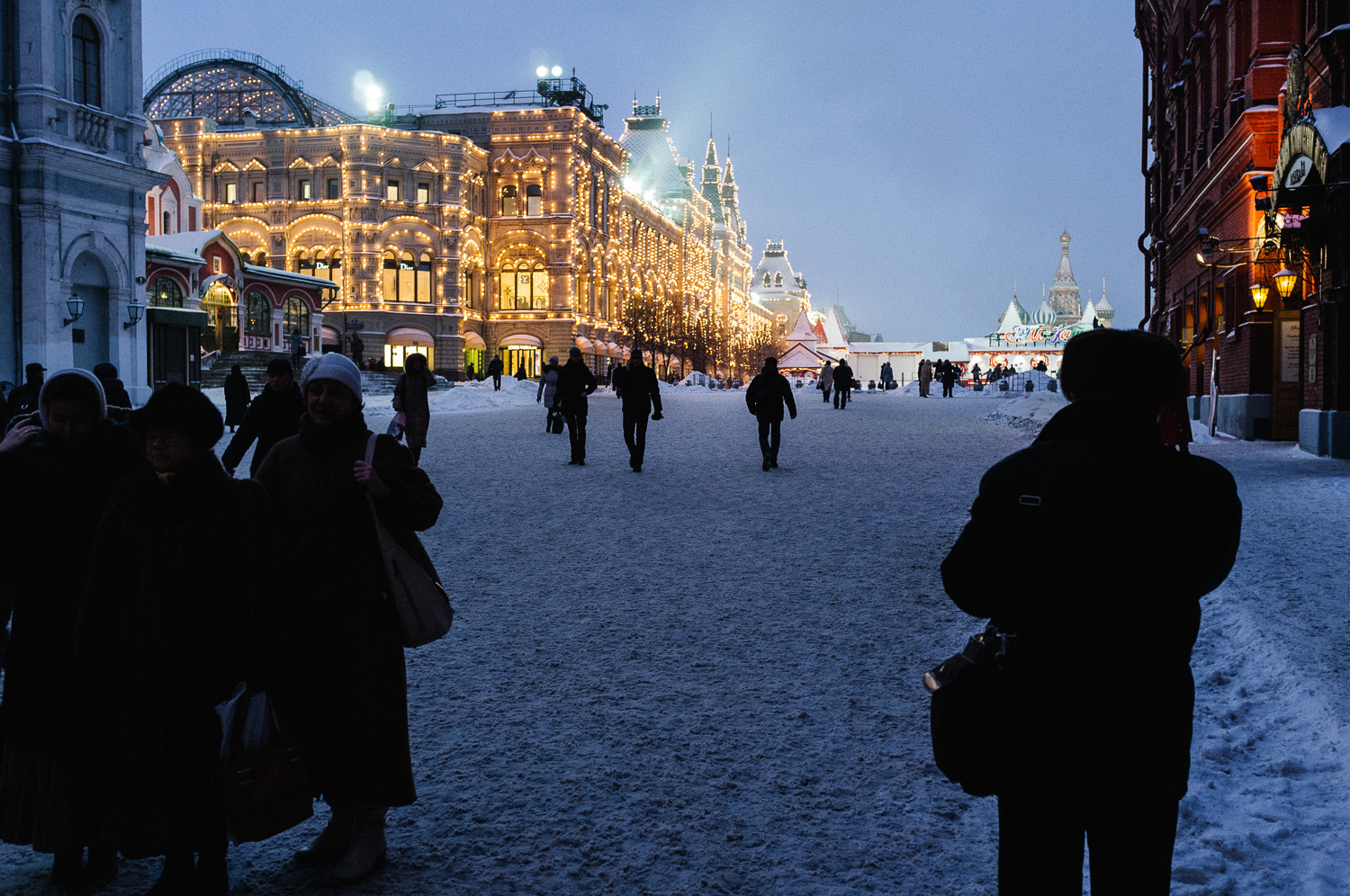 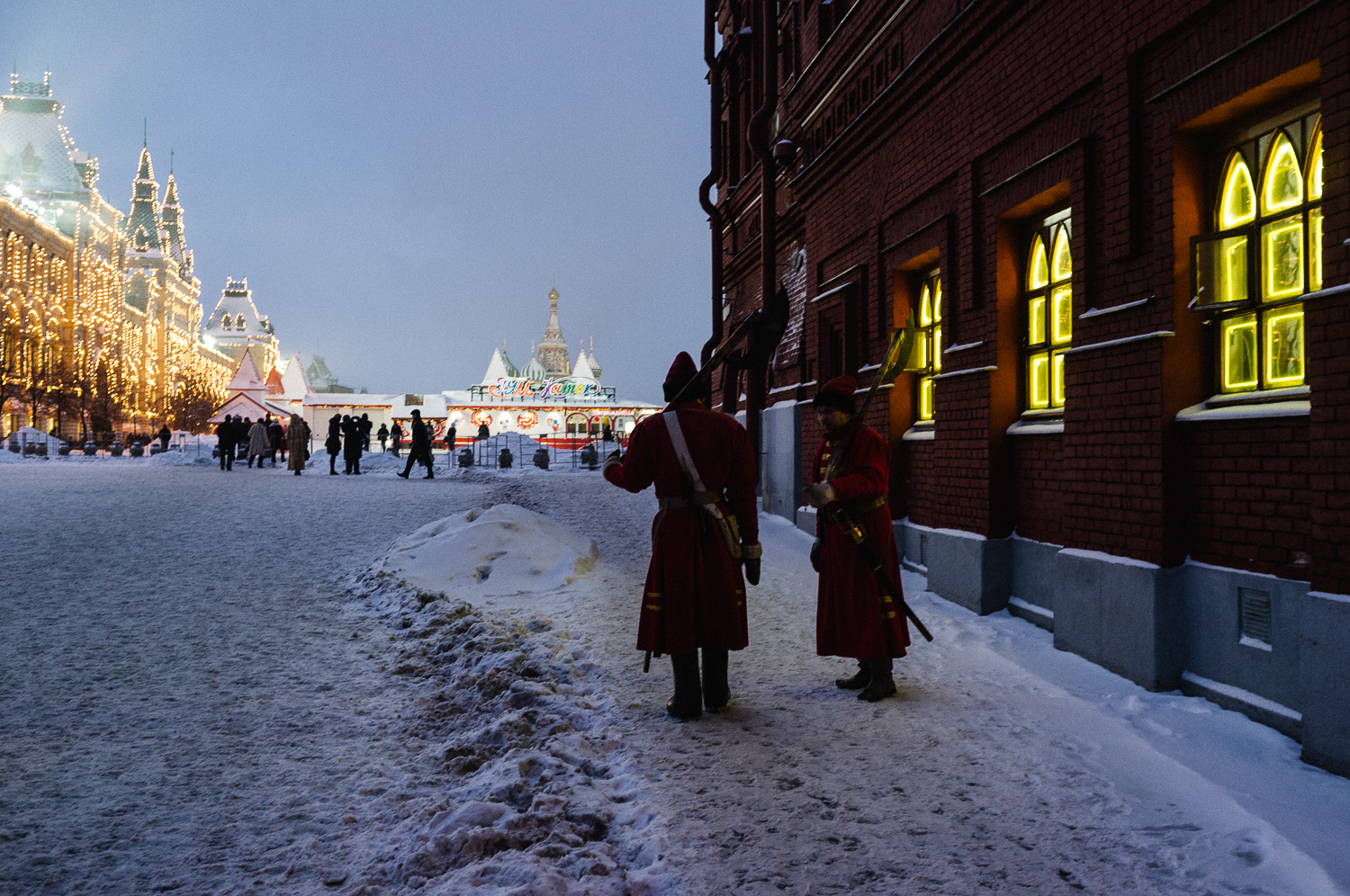 But to me it was pure magic. The whole place looks like it is a part of a fairytale. It’s the light, the buildings, the people in their winter coats, the thousands of light bulbs of the GUM and most of all the snow.

It was warmer than the nights before but still around -15 degrees Celsius. Add a strong wind and it was still far from being cozy but I wore long underpants, warm shoes and a warm jacket. 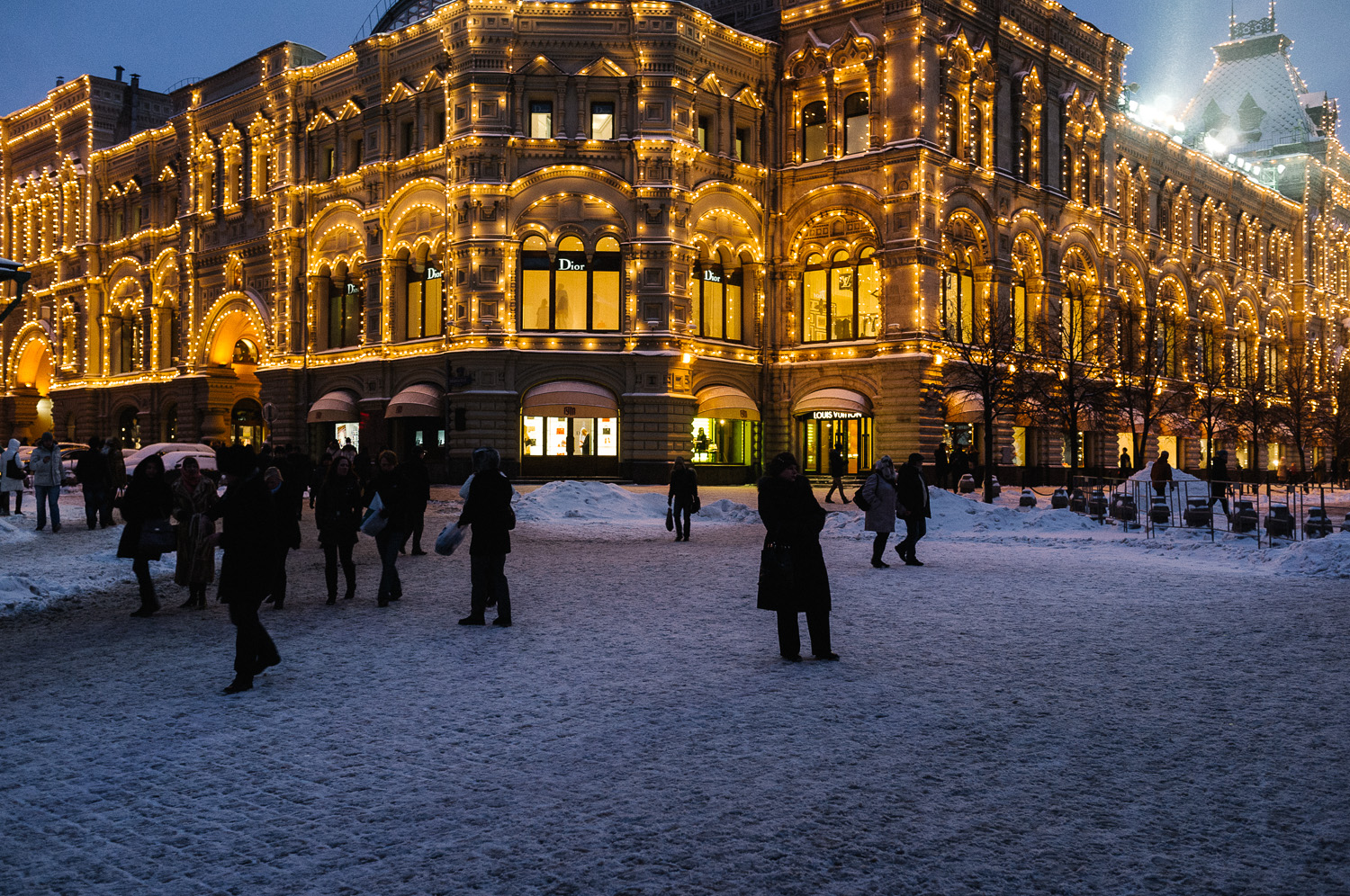 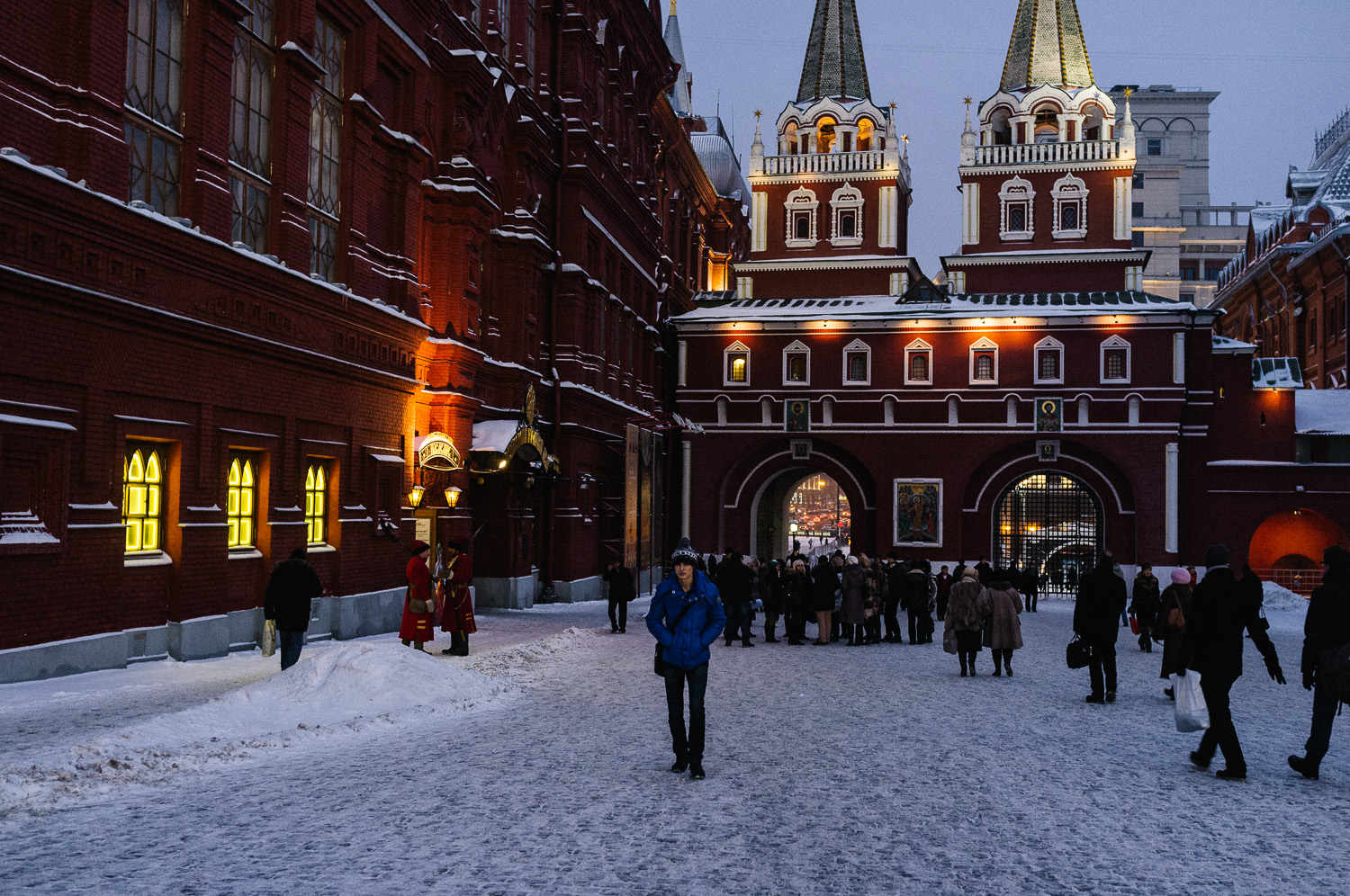 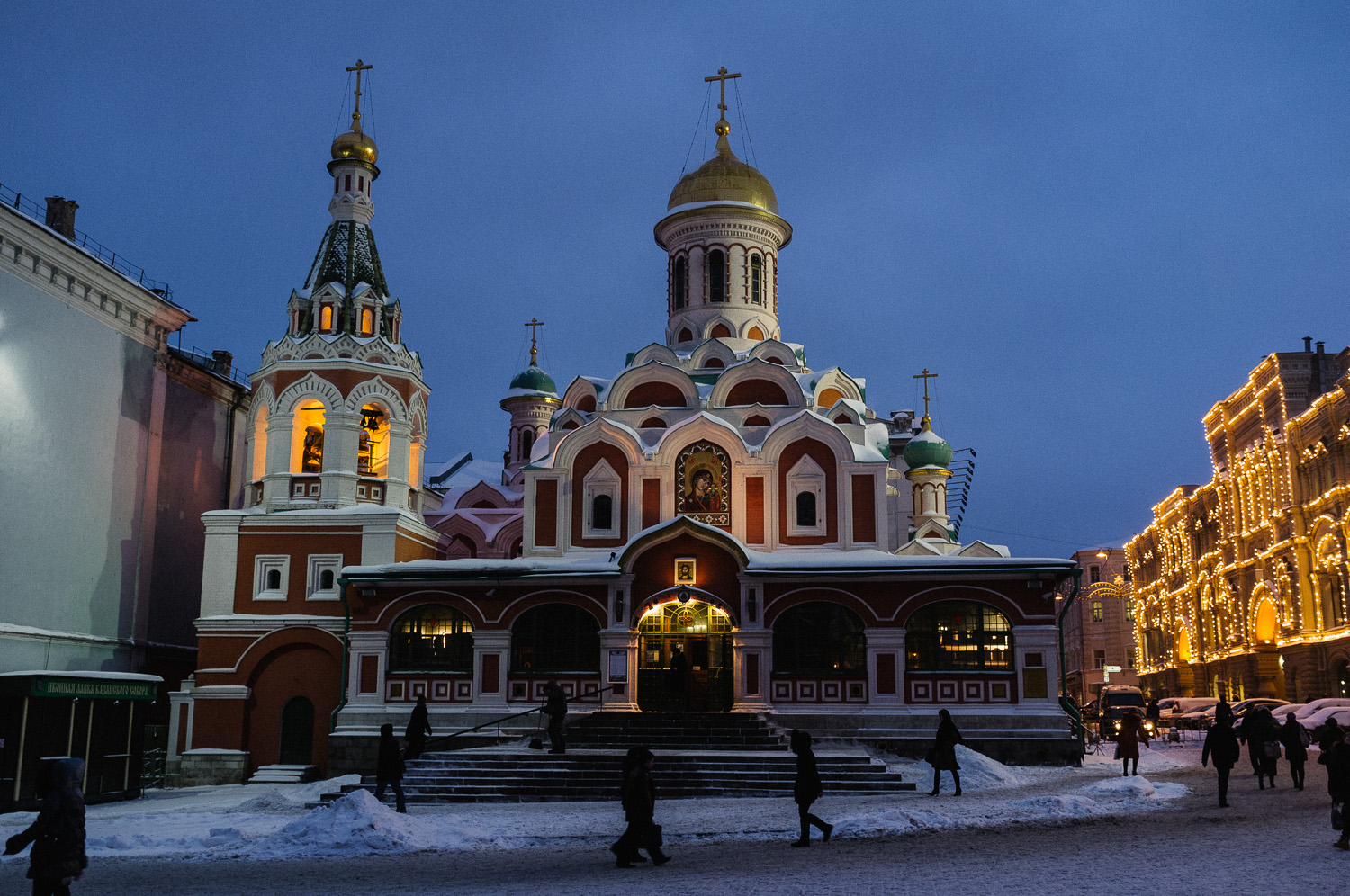 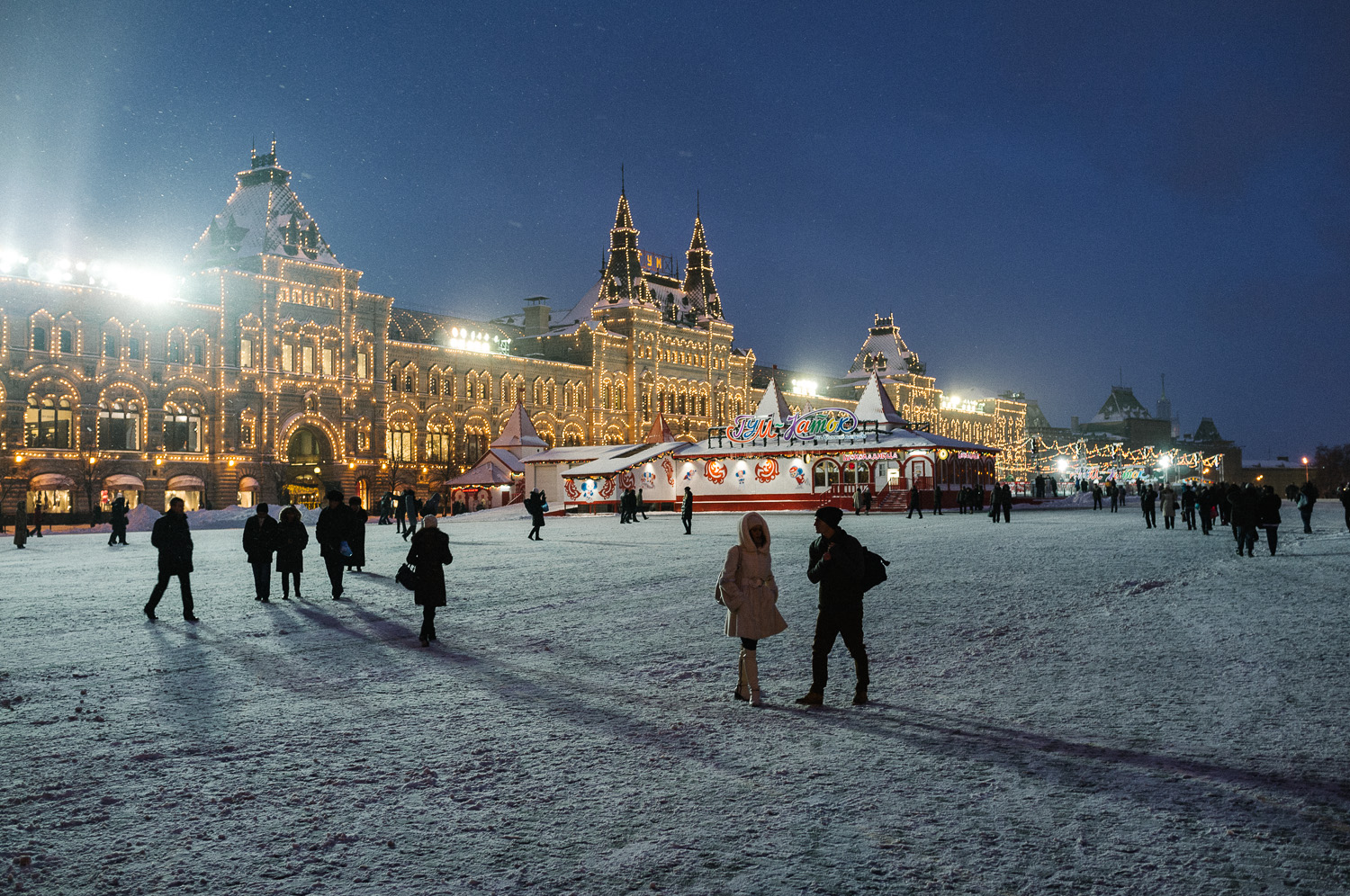 Unfortunately my pictures don’t do the place justice. Initially I almost hated them because of their weird colors. Usually the Fuji X100 is one of the best cameras when it comes to white balance but this time it failed. I think the problem was down to the fact that there are so many different light sources. One building is lit by one type of lamp while the other building is lit by a completely different kind of lamp. It is impossible for a camera to find the right balance.

My first reaction was to convert them into black and white. That solved the problem in a very efficient way but the black and white images did not show the place as I remembered it. Being no king of post processing I had no solution to this problem until I got the VSCO film presets for Lightroom. Thanks to VSCO I was able to convert them in a way that I like the images now. I’m still not totally happy with the result but it is good enough to post them in color now. By the way: I used the Kodak Porta 400 preset as a base plus some smaller changes. 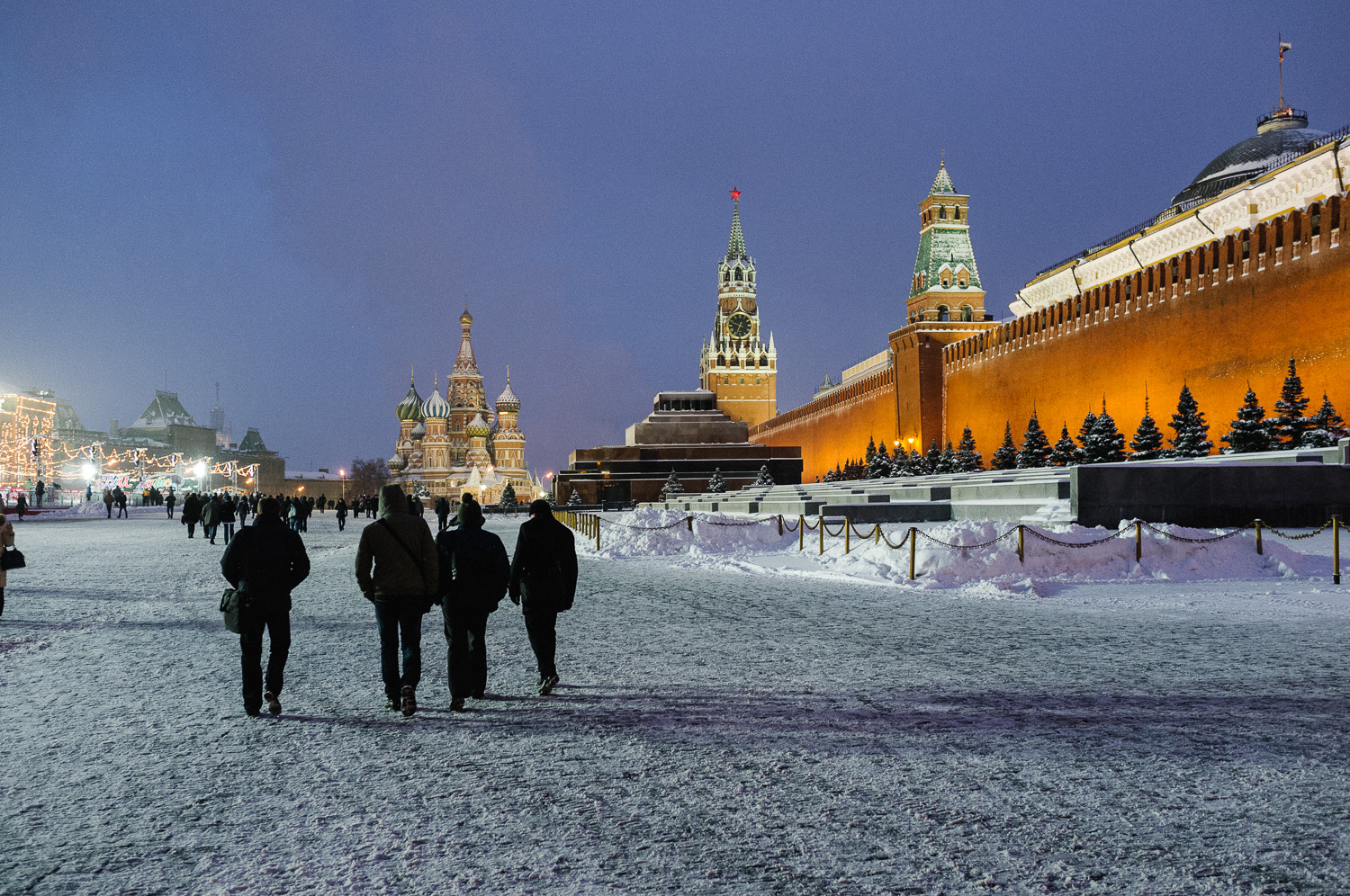 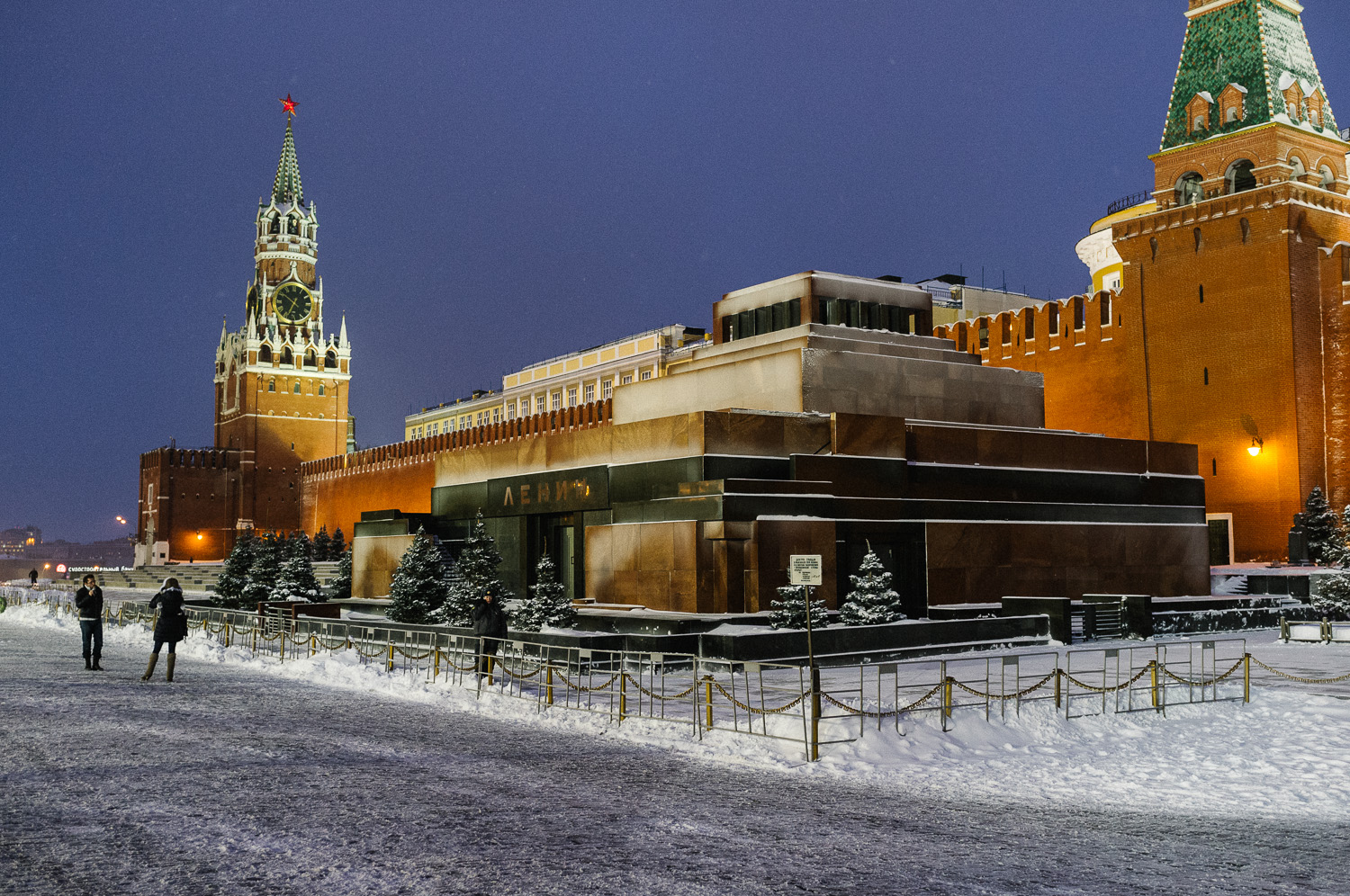 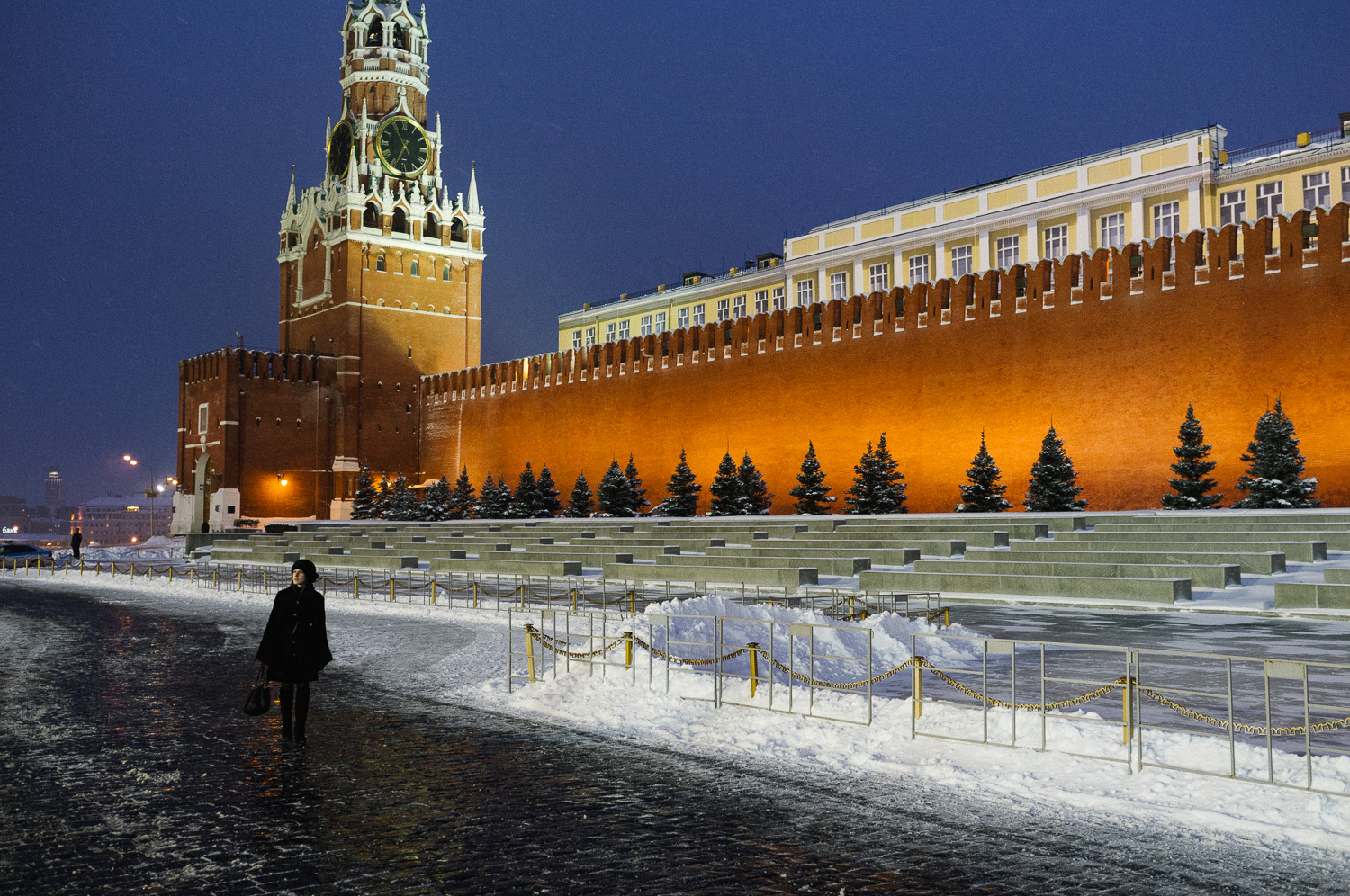 Just when I went back to the GUM to meet my colleague it started to snow. Now it was just  perfect. I headed back to the Basil Cathedral and took some shots. The one I love the most is the image below. Strangely this is the only shot I still don’t like in color. There is a strong color shift because of the light and I haven’t found a way to correct it. If you got an idea you are more than welcomed to help me.

When I finally went back to my colleague I was still in awe and told him that I think that this is probably the most beautiful made man place on earth. And I told the truth! I think I have said that in my first red square post already but I can’t stress it out enough how beautiful and magical this place looks like on a cold winters day. Go there and have a look! 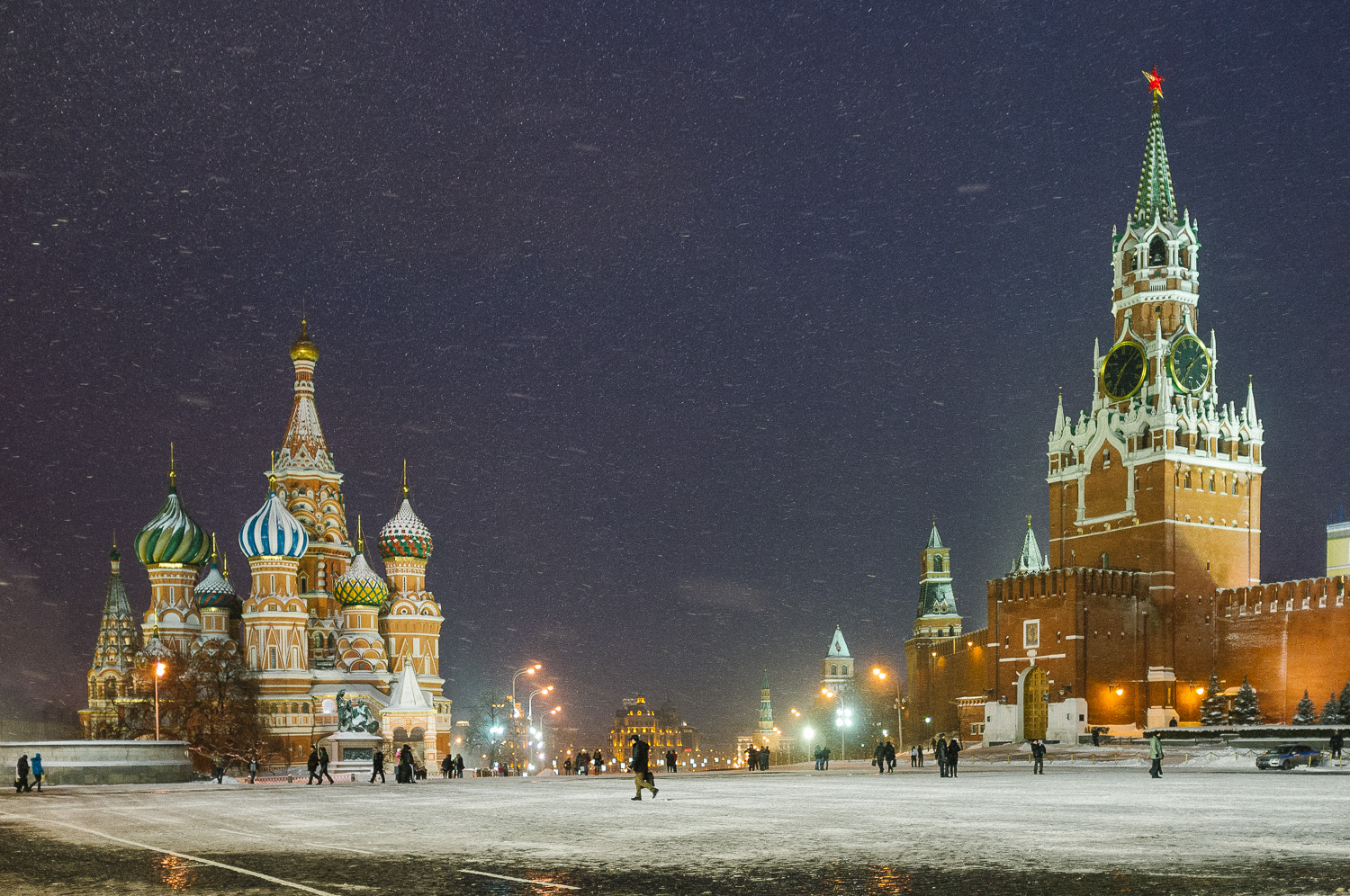