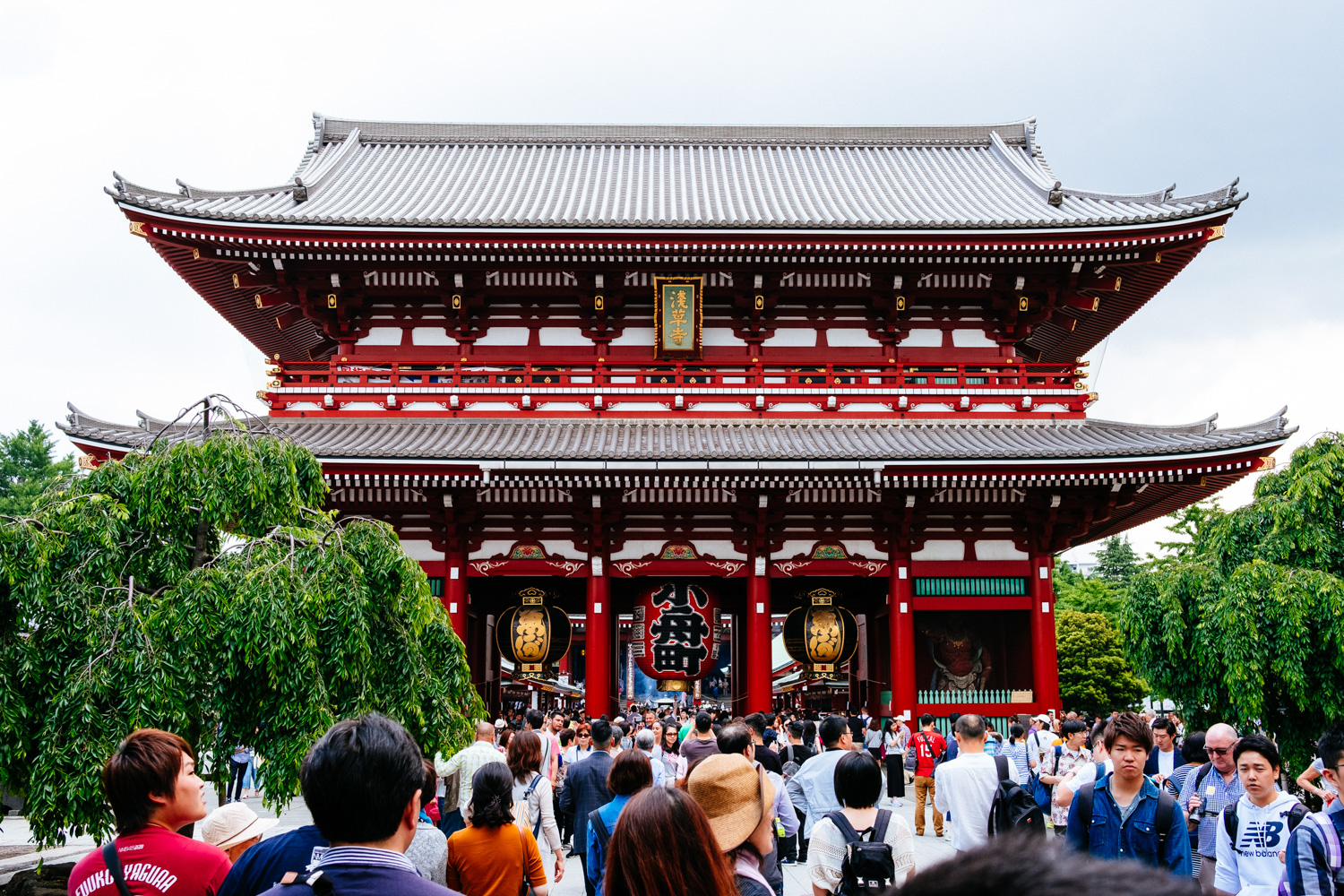 There are places you have to visit. They come on top of every travel guide. So don’t be surprised if you are not the only one.

On my second business trip to Japan I extended my stay for a weekend in Tokyo. This was the very first time that I didn’t get back after work was done. I looked forward to two days of extensive sightseeing. 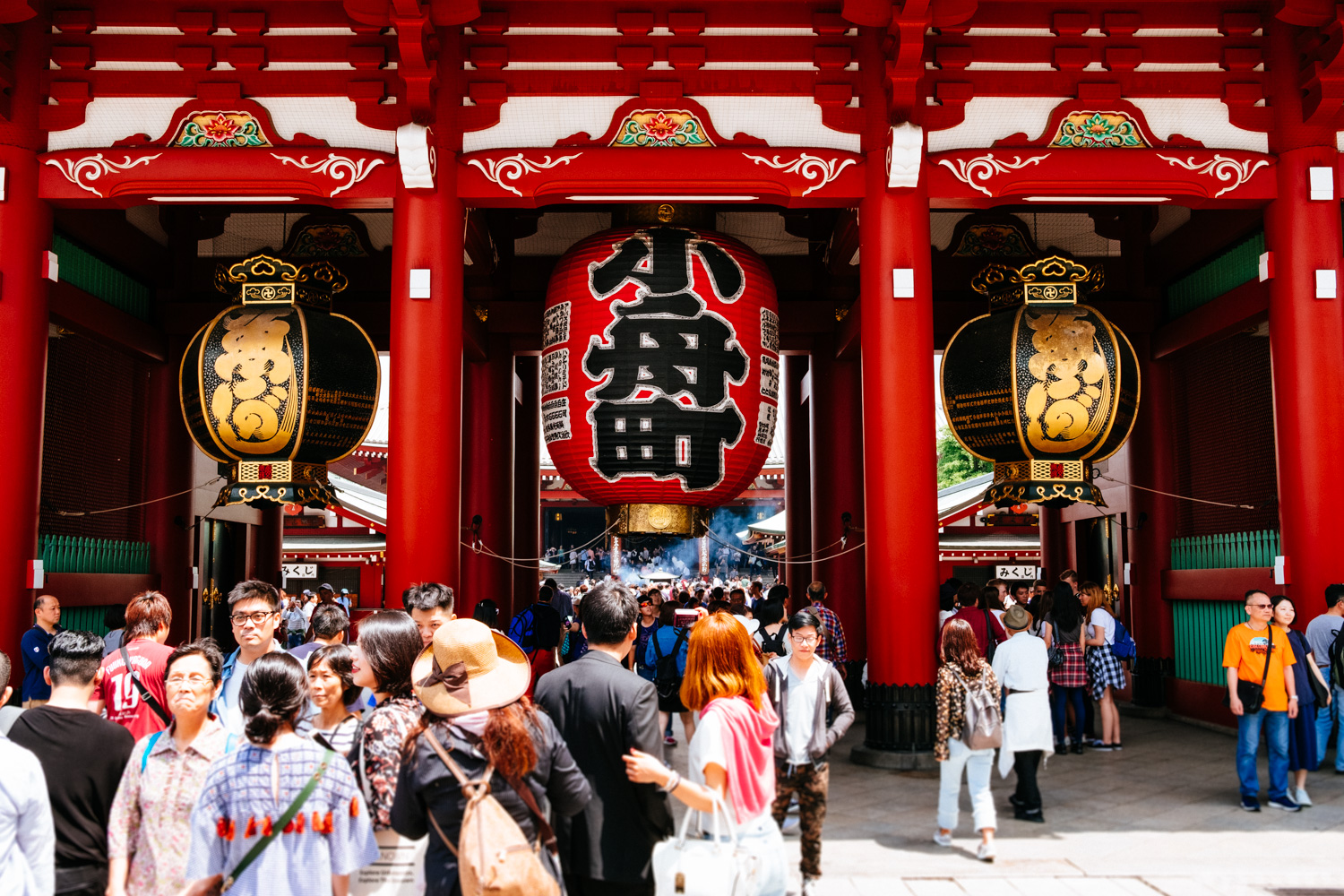 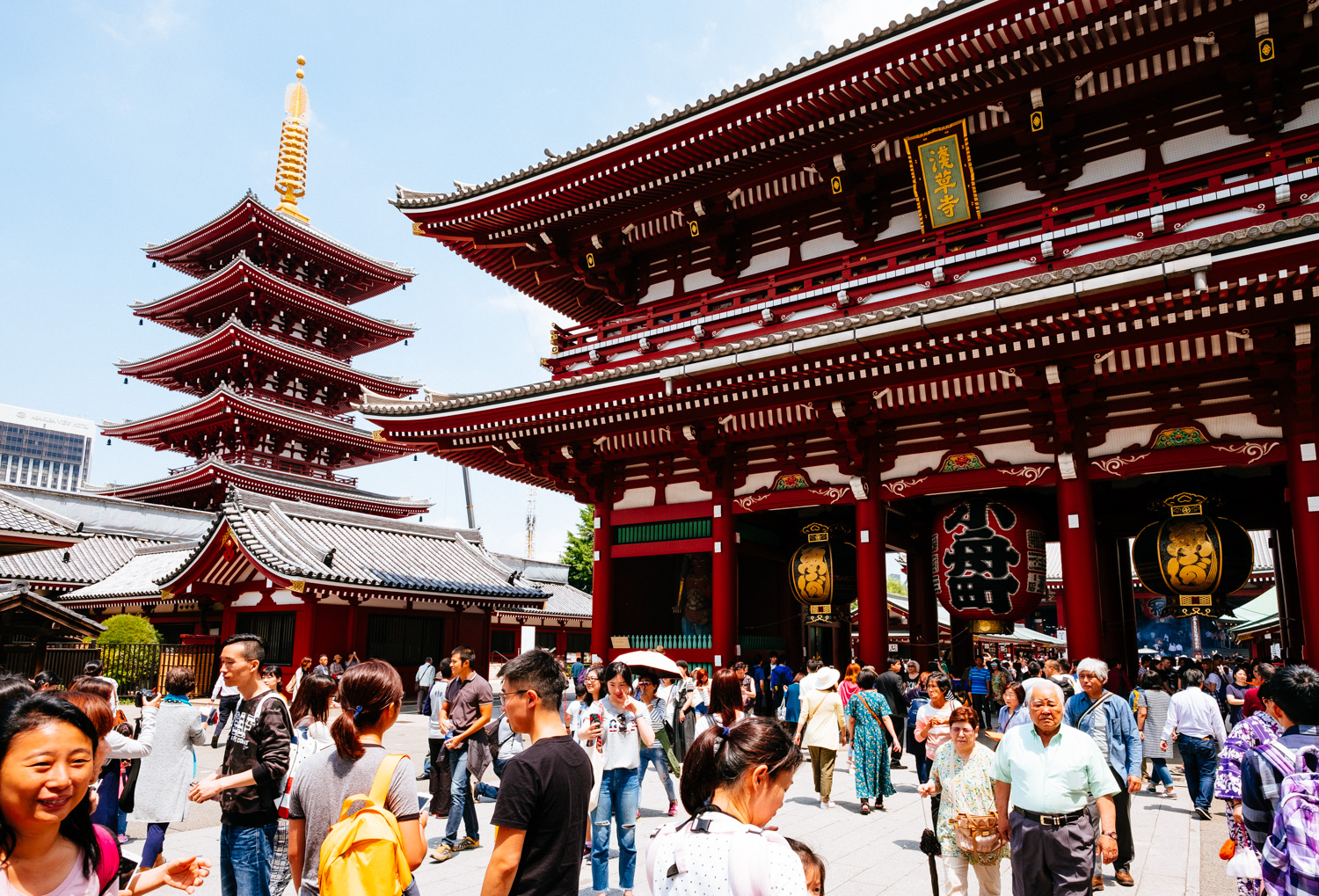 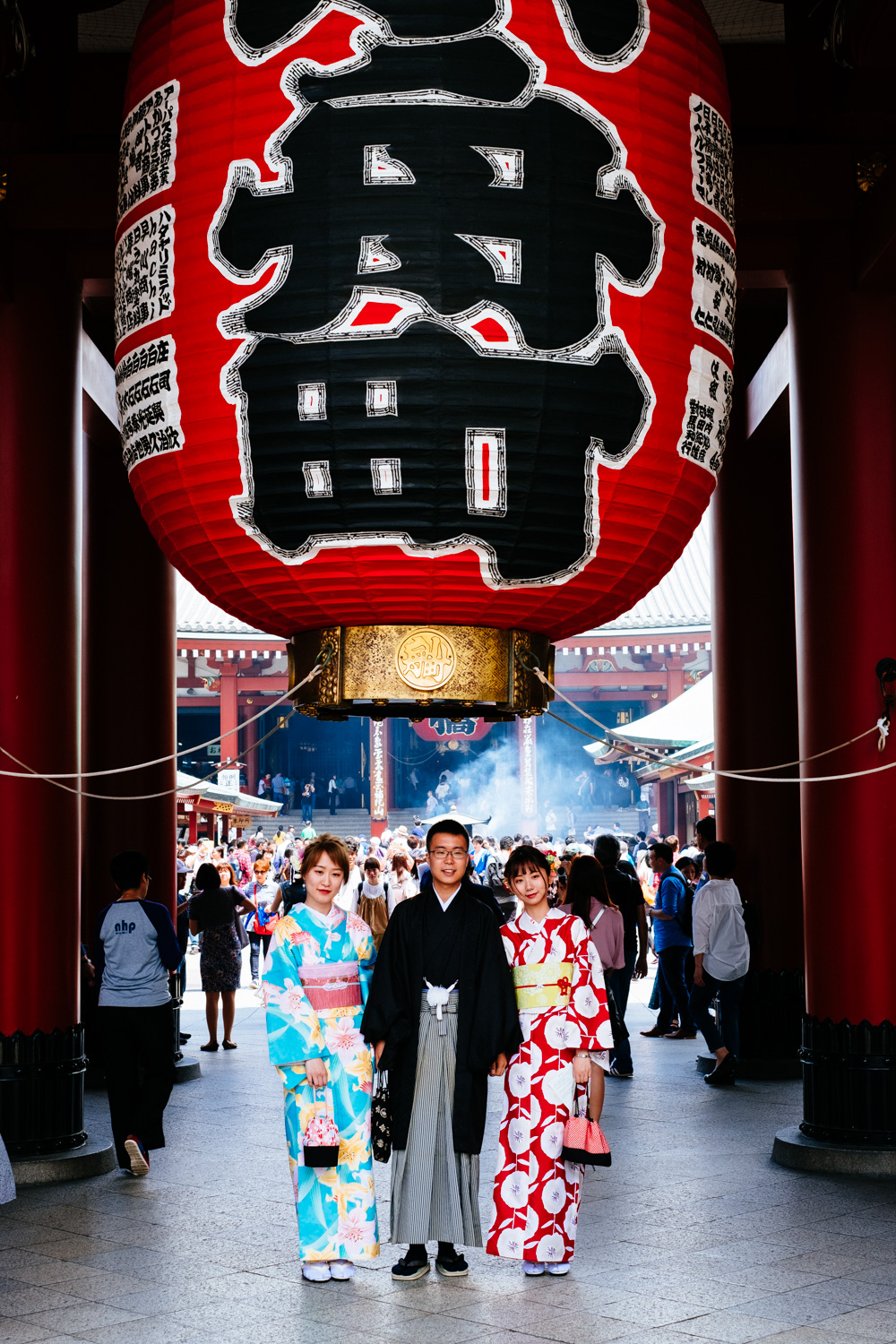 Originally I planed to visit the famous Tsukijii fish market but after almost two weeks of traveling in South Korea and Japan I was exhausted and to set the alarm clock at 3am was not an option.

So I decided to visit the Senso-ji Temple in Asakusa. One of the oldest temples in Tokyo. The one with the famous, gigantic lantern which picture you can find in every guide book of Japan. So no wonder that every single tourist goes there and takes pictures of themselves standing under the lantern. I takes some patience and good luck to capture some beautiful Japanese women in colourful traditional dresses instead of Chinese tourists in slippers. I was lucky twice. On my way in I found those three posing for their friend and on my way out another beautifully dressed woman who has their picture taken by her friend. 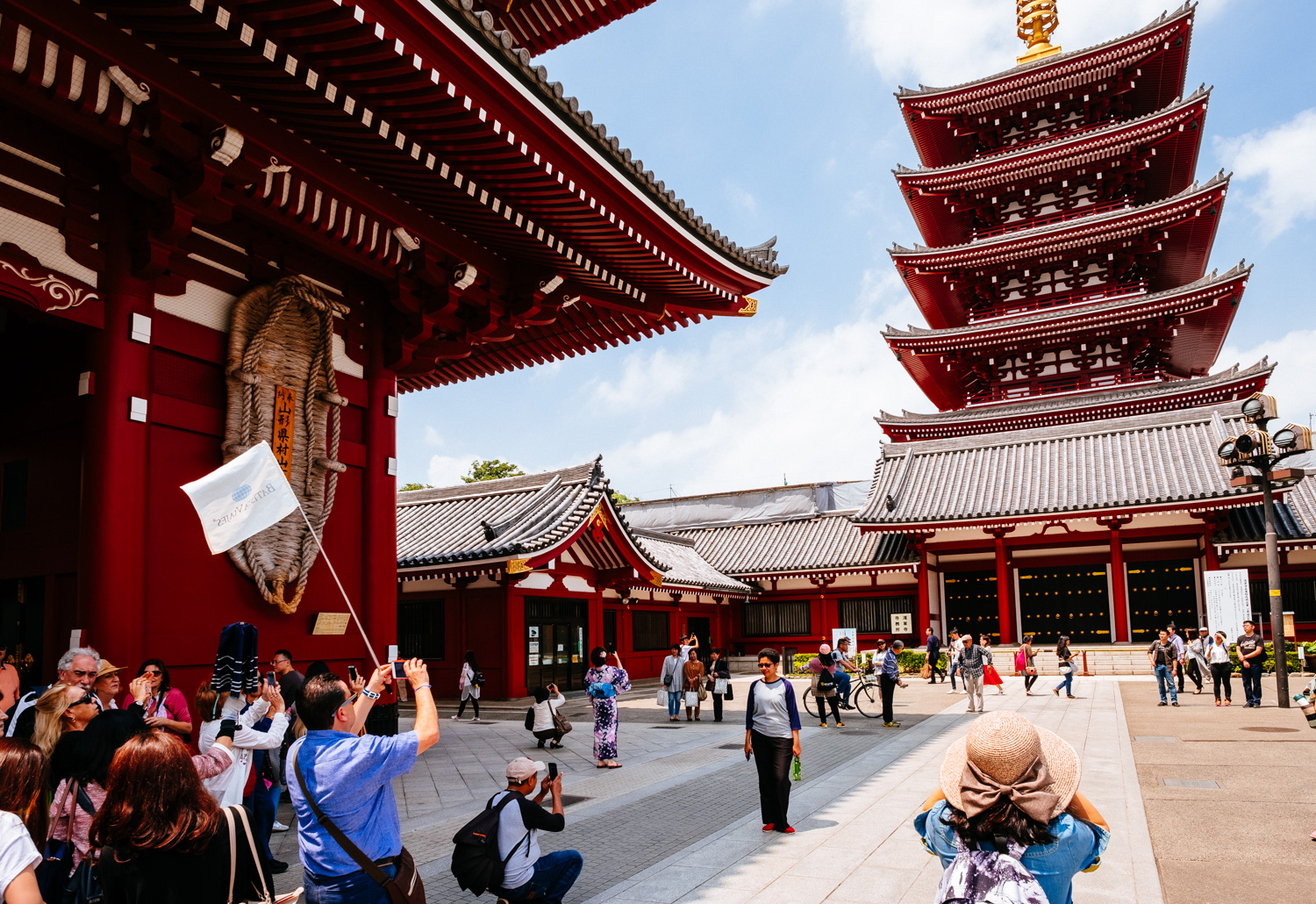 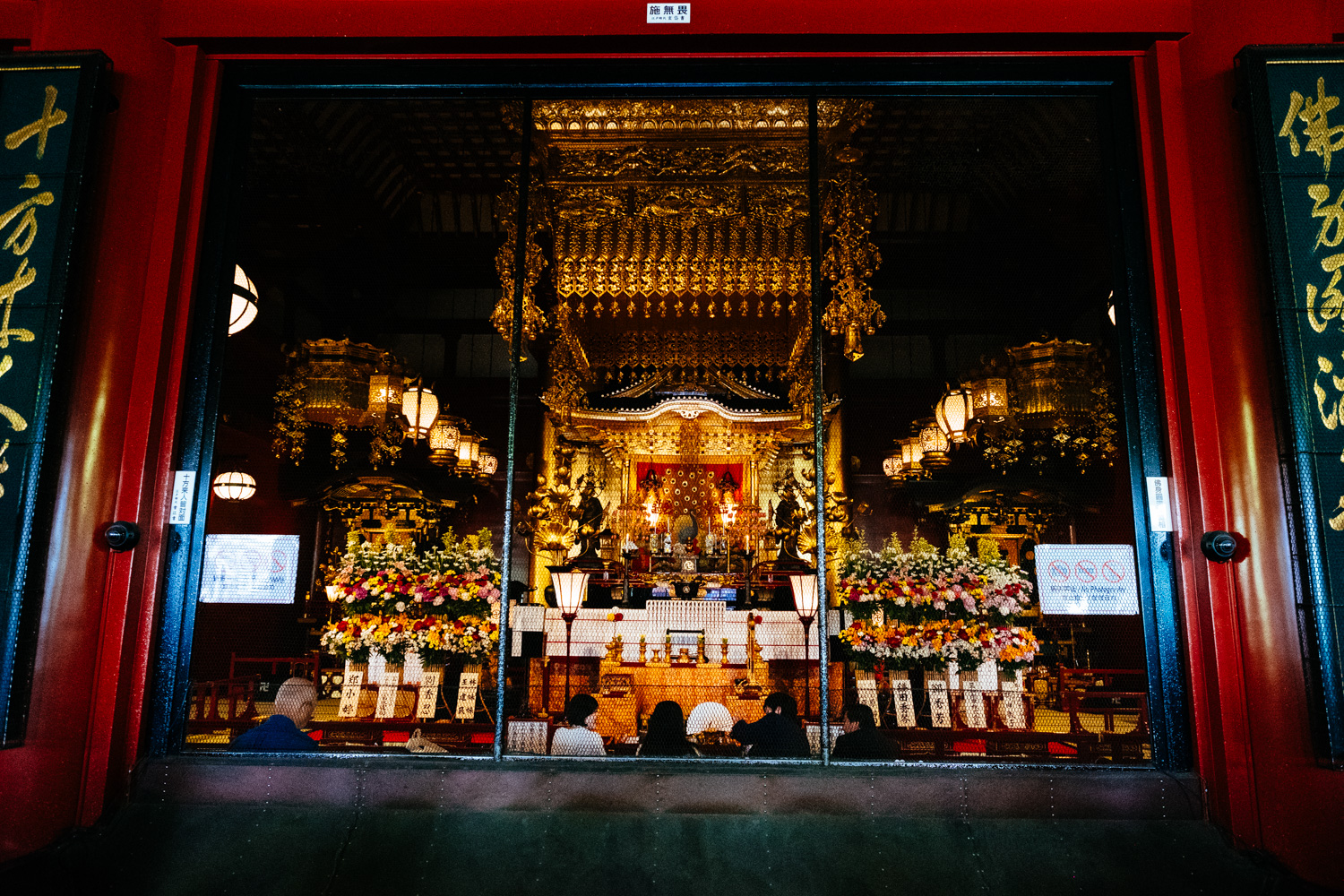 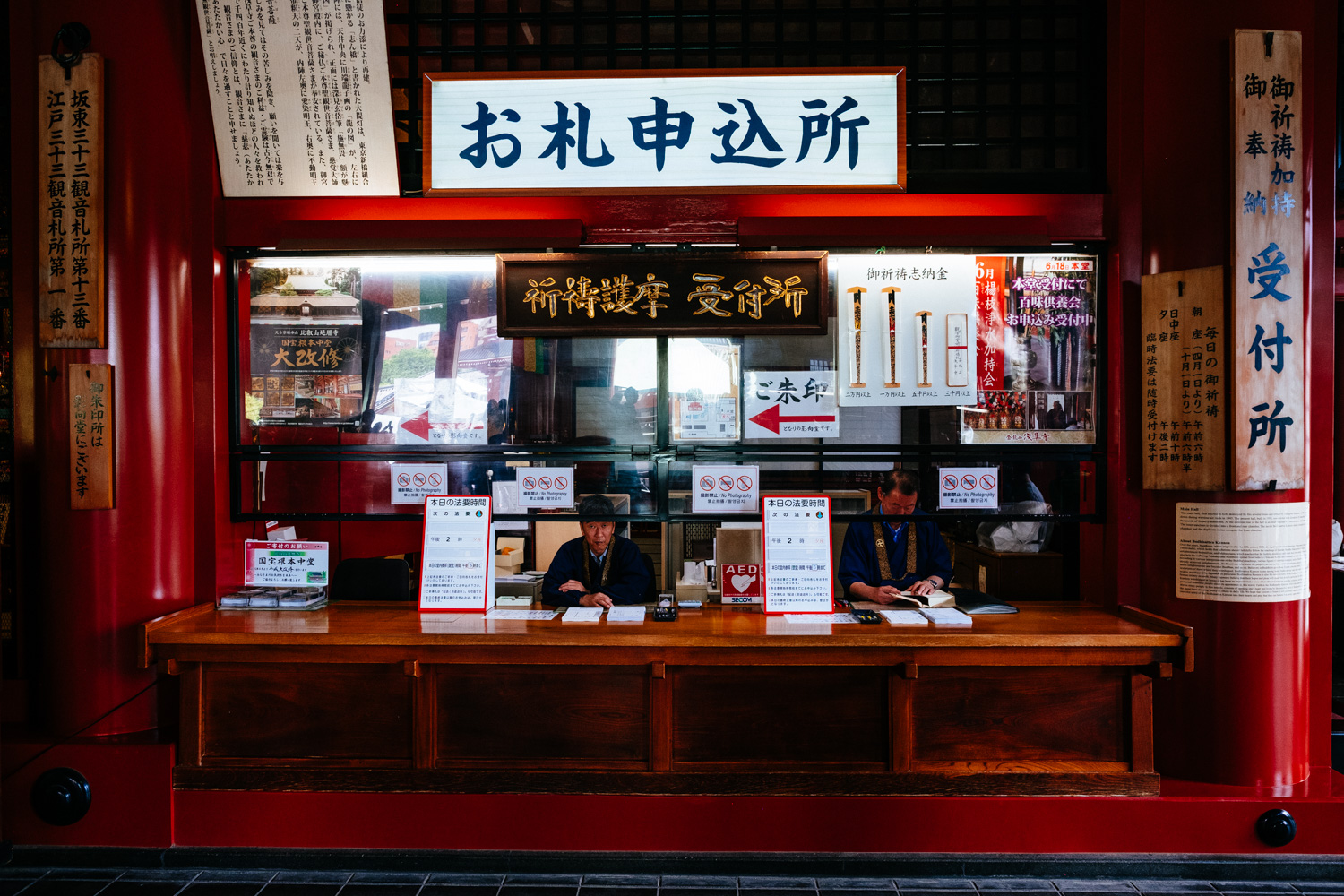 It was very hot that day and the light was tricky. That’s often the case in Asia especially in summer when the sun is strong on an overcast day. There is almost no way to balance the contrast in between the subject and the bright sky. Most of the time you need to decide to go for the correct exposure of your subject and risk to completely blow out the sky or to go for the sky and underexpose the shot. Not good. It is much better now with the new 24MP sensor of the X Pro-2 but it is still challenging.

It is best to avoid such light altogether simply by not taking any pictures in between 10am and 2pm but of course that is not always an option. Sometimes you have to deal with it.

One good solution is to avoid to include the sky or to simply focus on indoor shots. So I went inside. But there was another challenge. As mentioned at the beginning this is one of the touristic hot spots of Tokyo so the number of visitors were massive. It was very hard to get a clean shot like the one above because there were people entering my frame all the time. Normally I have no problems to include people in my pictures in fact it is the other way around. People can make a travel shot. But there is a difference in between local people in their prayers or tourist with their selfie sticks. The first make you image interesting the later have the potential to destroy it.

So as much as I would like to tell you that this was a very special visit and that this temple is a place for quiet contemplation it’s the other way around. It was very overcrowded and loud. People were pumping into me all the time and it was hard work to get some good shots. One of my favourites is the one below. It shows some prayers in the foreground and the masses of tourists in the back. It also gives a good idea about the contrast in between the dark temple and the blazing light outside. I resisted to push the shadows because I prefer a more natural look. 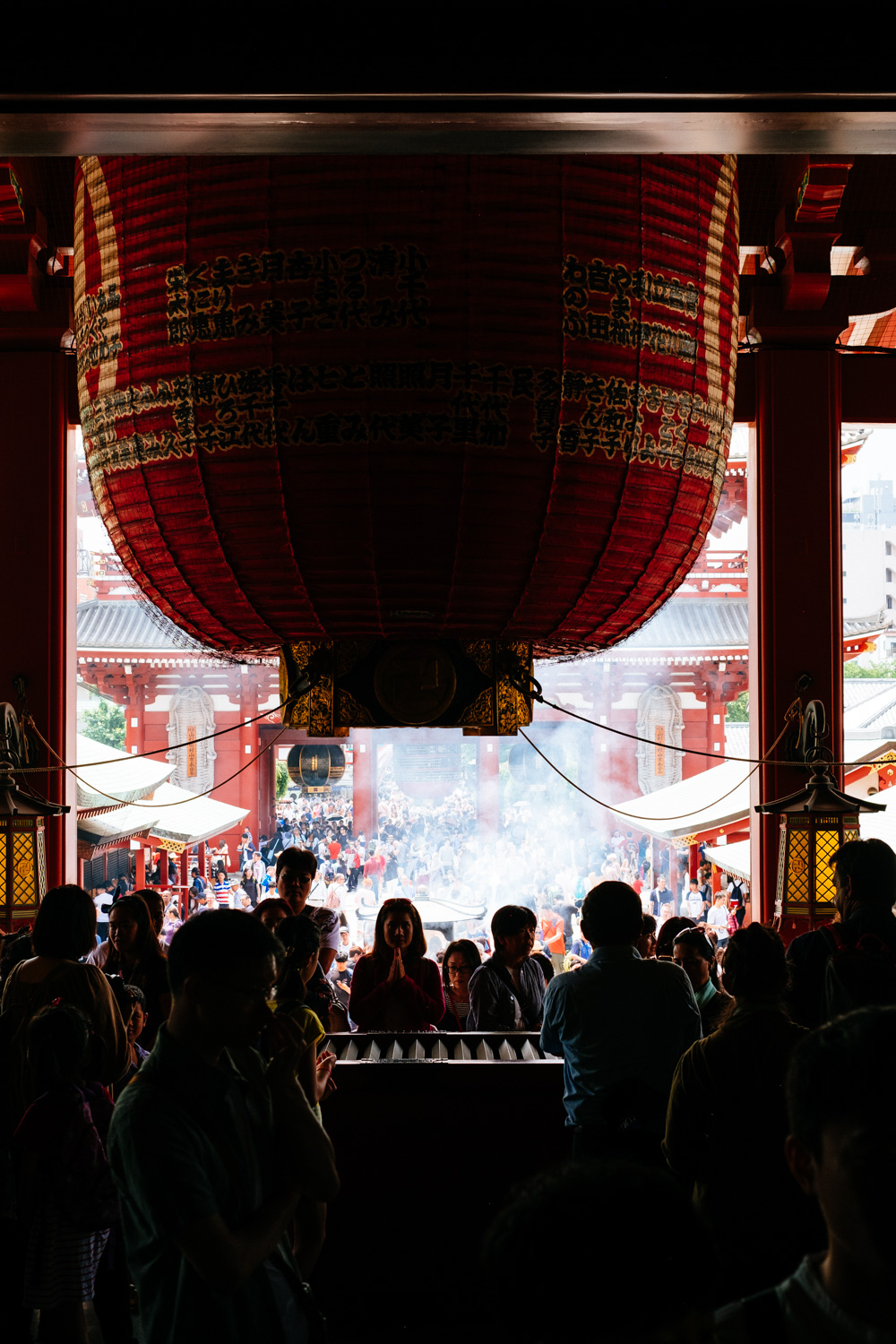 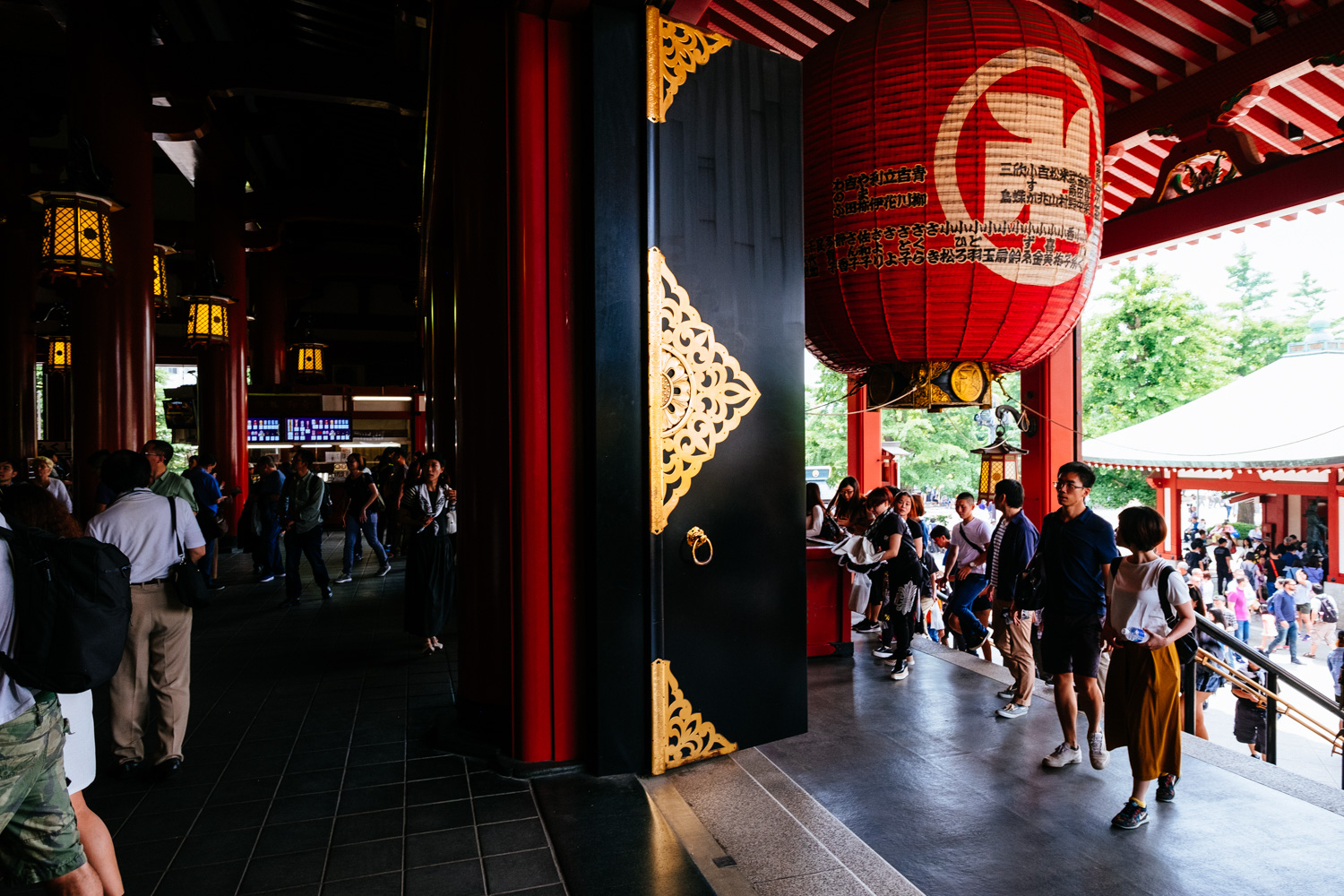 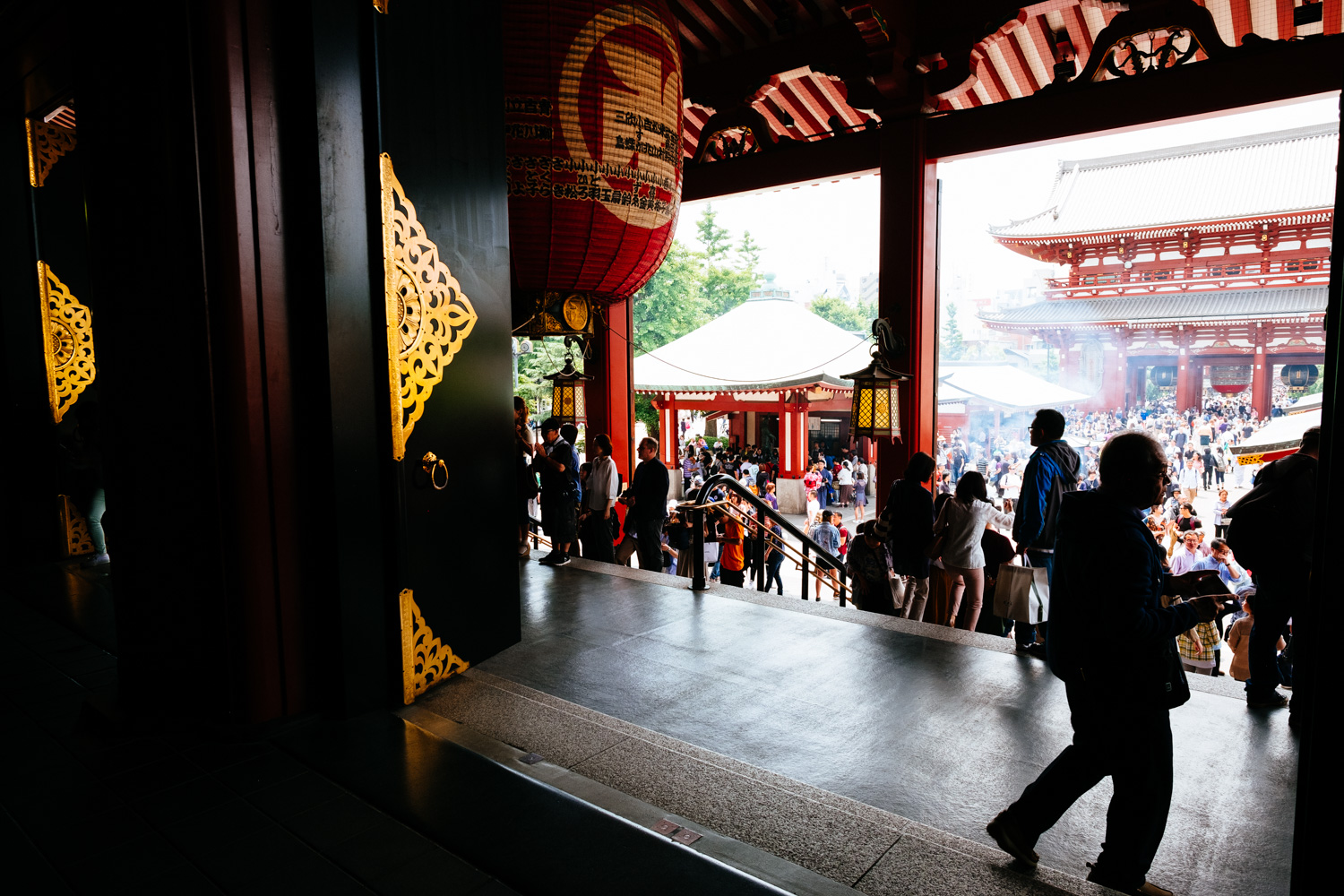 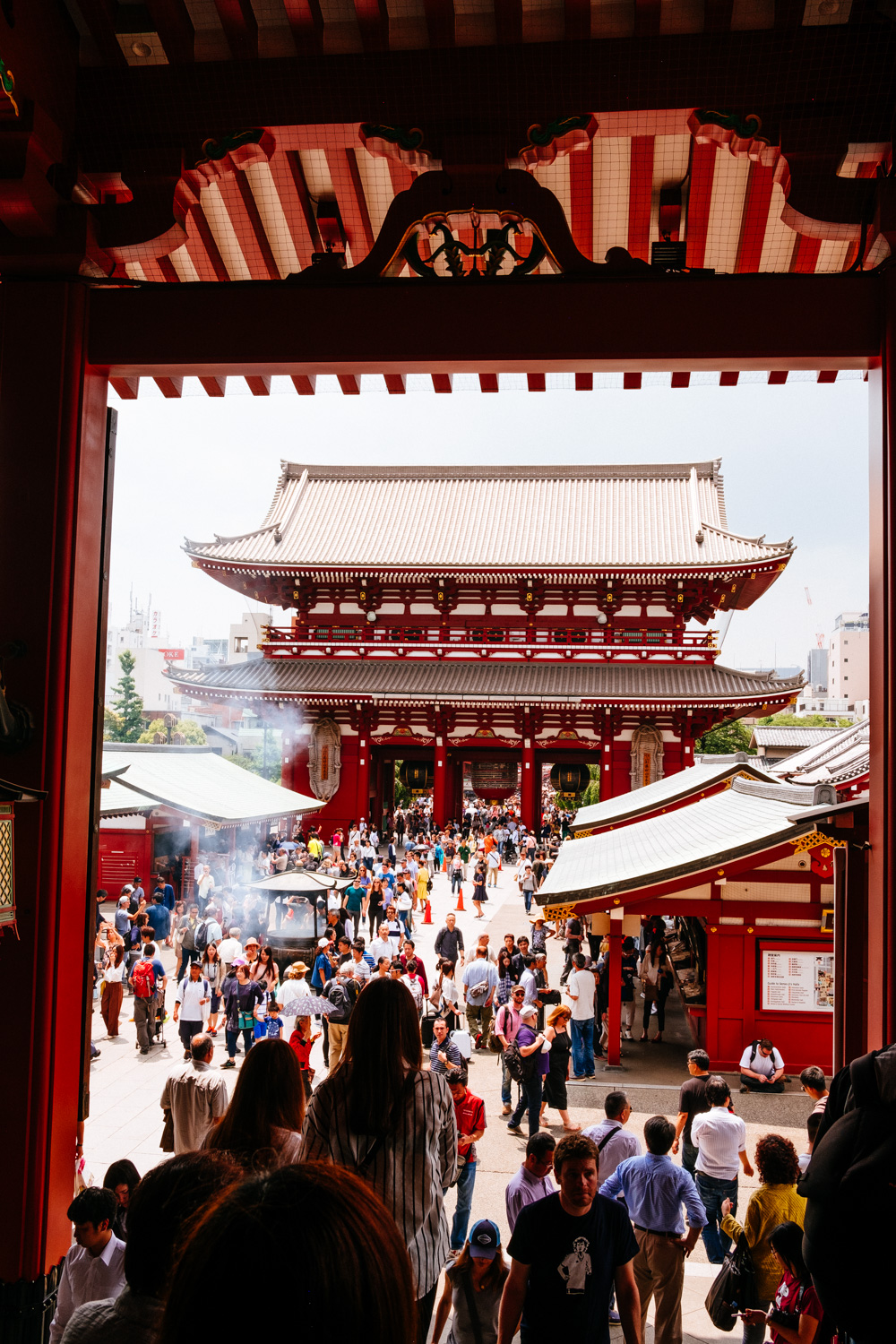 On my business trips my camera gear has to be light. Therefore I settled with the X Pro-2 plus three small primes. The XF 14/2.8 R covers the true wide angle shots, the XF 23/2.0 WR the classical reportage style pictures and finally the XF 35/1.4 R which works extremely well for portraits and for all shots where I want a slightly compressed view. I also tried the XF 56/1.2 R on one trip but came back to the XF 35/1.4 R because I preferred the wider view and of course the fact that the lens is much lighter.

For me those three primes work just perfect on my business trips but I should add one thing. On those trips I never leave the big cities so there is zero landscape photography where a wide angle zoom or tele zoom is really useful. For cities however I have learned that I prefer those primes.

How about the XF 16-55/2.8 WR to cover all three of them without the need to switch lenses? From time to time I think about this lens but not for those kind of trips and here is why. 1. It’s not wide enough. The 14mm really makes a difference in the shots. It also helps to avoid tilting of the camera which normally leads to falling buildings. The 14mm also helps in tight spaces that you can find anywhere in South East Asia’s or India’s big cities. 2. It’s not fast enough. Yes it’s f2.8 but the XF 35/1.4 R is f1.4 which really gives a different look. 3. It’s a monster. It is big and heavy.

And even though its weight is similar to the sum of the three other primes it makes a real difference if you have mounted one big and heavy lens on the camera or something like the XF 23/2.0 WR. It’s more comfortable to have a smaller lens attached and the camera/lens combo feels less intimidating to. 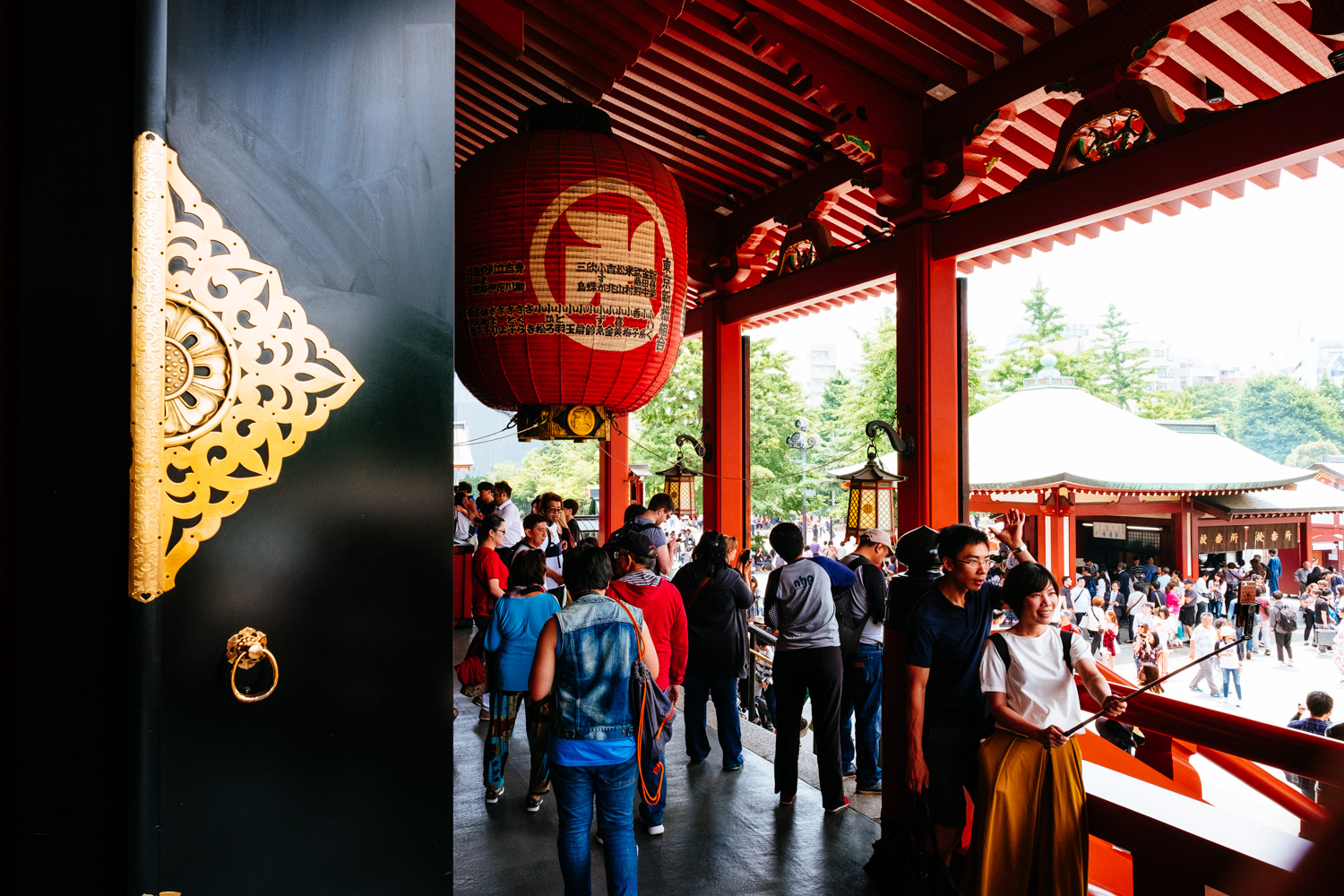 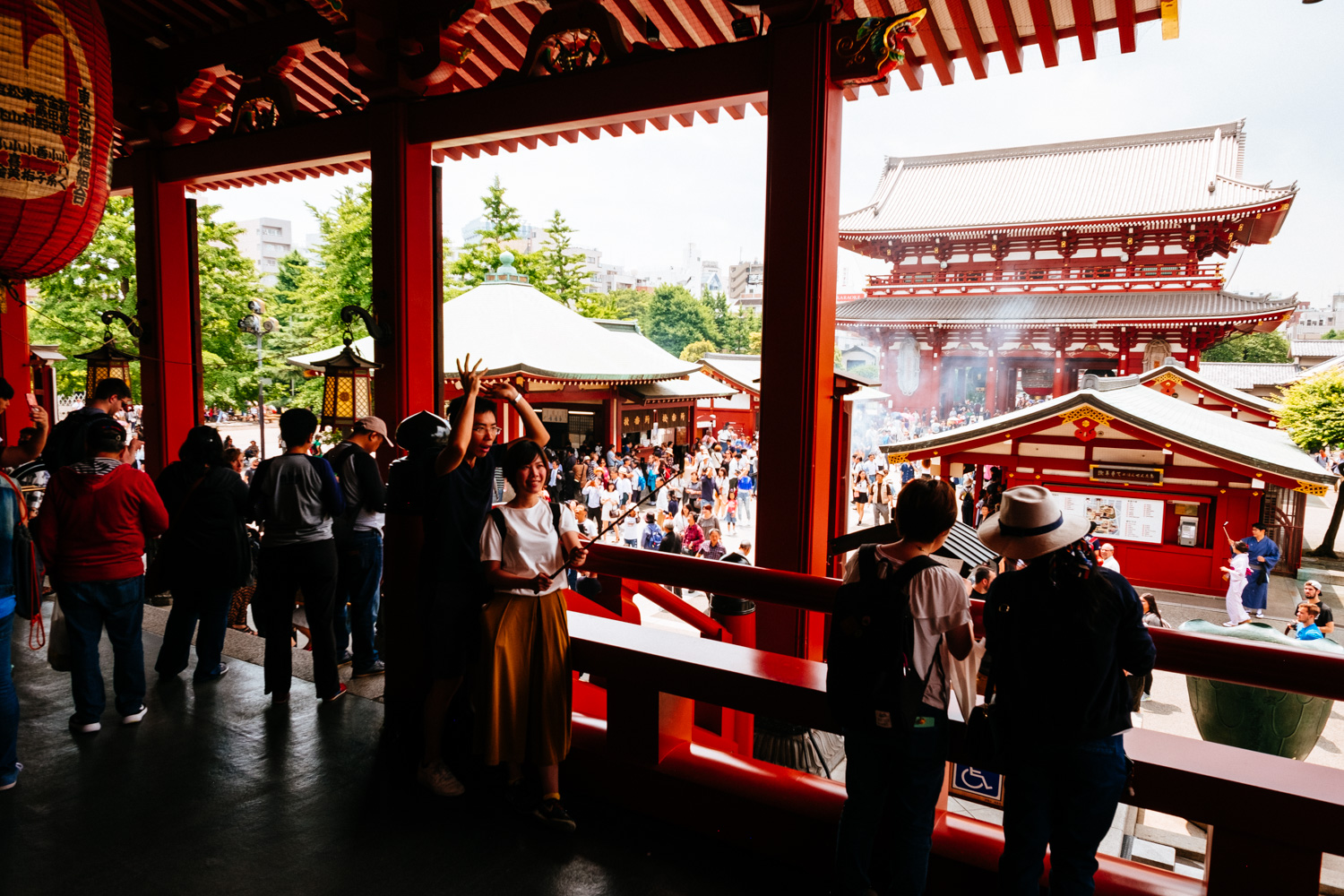 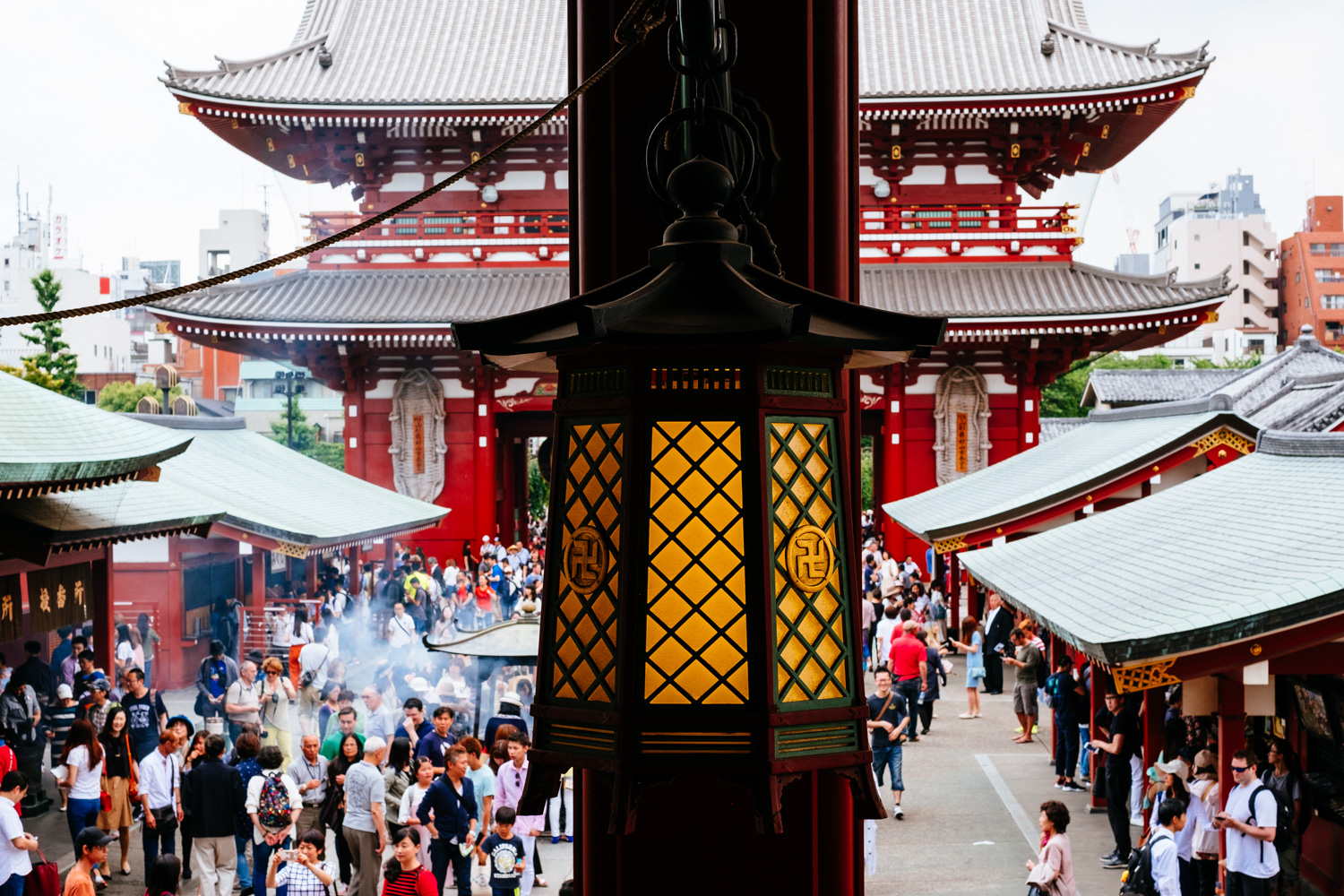 The last image of this blog post is an example what the XF 35/1.4 R can do. When I got my X Pro-1 in 2012 I initially got the XF 18/2.0 R and the XF 35/1.4 R. I meanwhile have sold the 18mm but I still have the 35mm. I’m aware that there is a newer version with faster AF and some weather sealing but I still prefer the old version because it is one stop faster and because the way it renders the image. I really makes a difference in the shots and now with the improved AF system of the X Pro-2 it focuses much faster than it did before.

I really love how its fast aperture of f1.4 helps to make the pretty young lady and the lantern stand out from the busy background and how it renders the smartphone of the tourist in the foreground. It doesn’t get any better than that in APS-C except if Fuji would make that rumoured XF 33/1.0. Somehow the XF 35/14 R reminds me on the XF 23/1.4 R. The 23mm also gives a very special look that you can’t get from their slower siblings.

So here is my top tip of the week: Try to find the XF 35/1.4 R second hand. It’s a fantastic lens and a true highlight among the excellent Fuji lenses.

The place was extremely crowded and the light was tricky but thanks to the excellent sensor of the X Pro-2 and the quality of those prime lenses I managed to bring back some very nice shots. 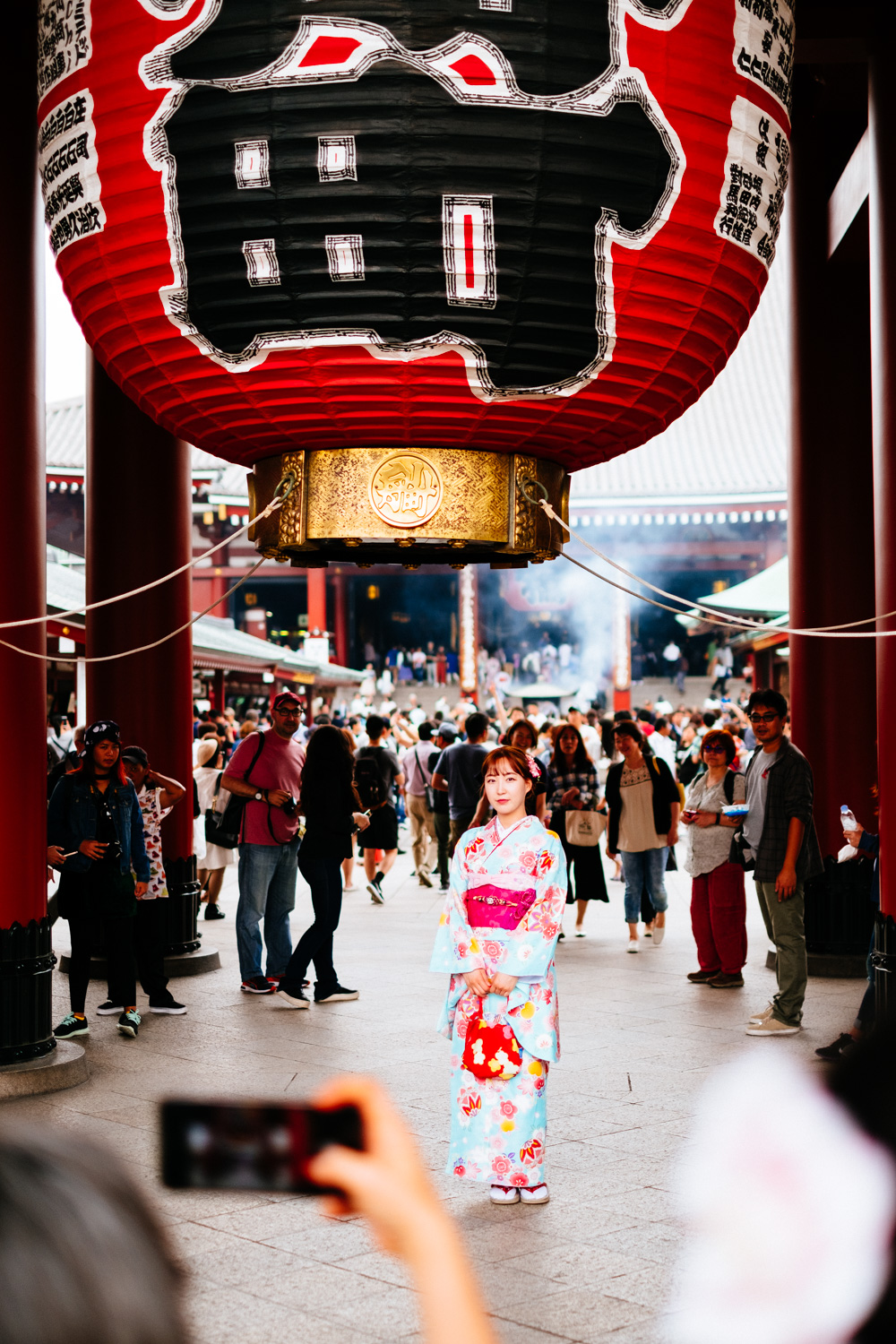