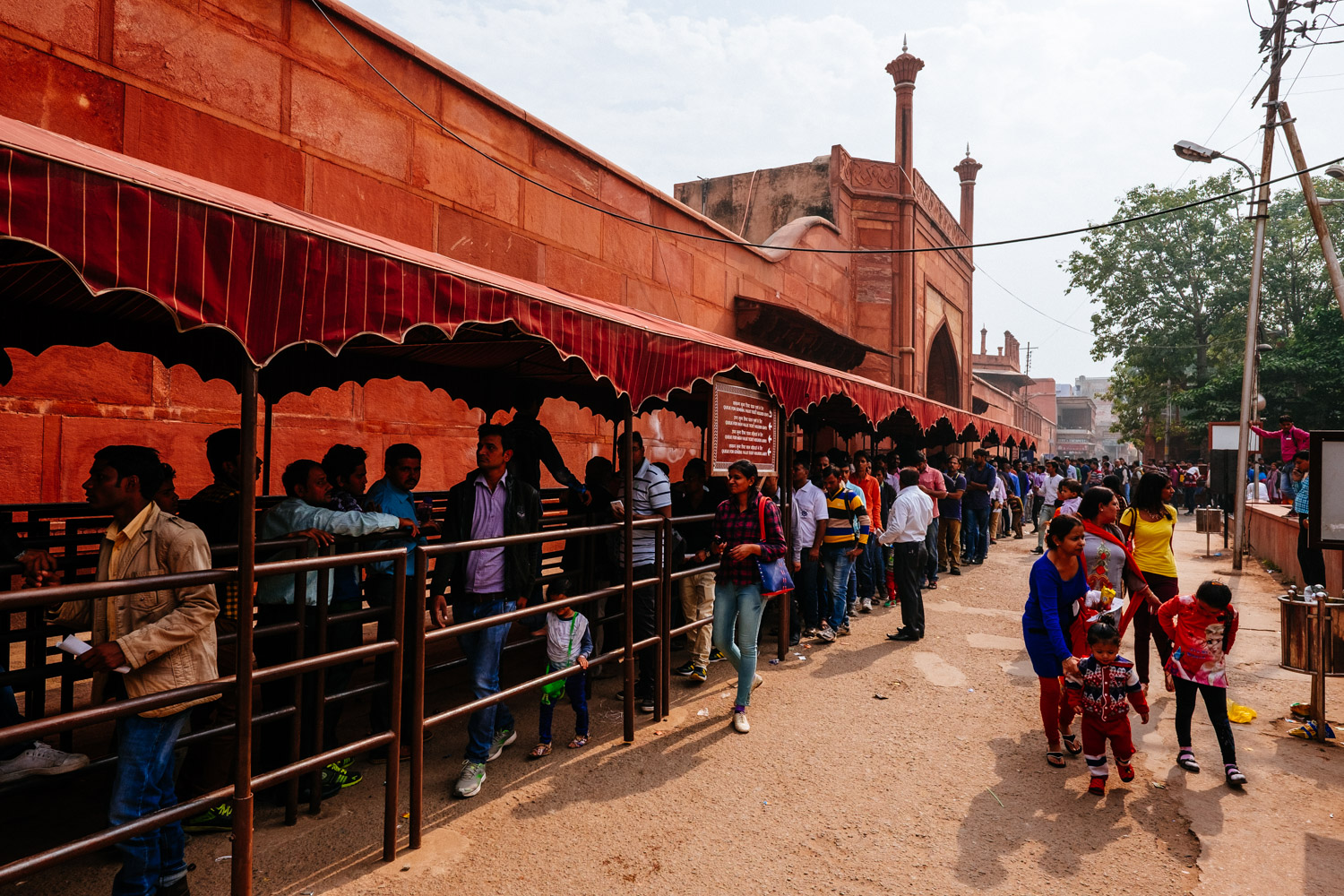 … are rare. Sometimes the music I hear can give me goosebumps. Sometimes it’s a painting or a movie. And on very rare occasions it can be a location. This is one: The Taj Mahal.

I have been to India before but never had the chance to visit the Taj Mahal. This time I made it happen. I arrived in my hotel in Gurgaon at 3 am in the morning and the car picked me at 8am.  Instead of wasting the Sunday to relax at the pool and to deal with my jet lag I decided to go to Agra to visit one of the new seven wonders of the world. 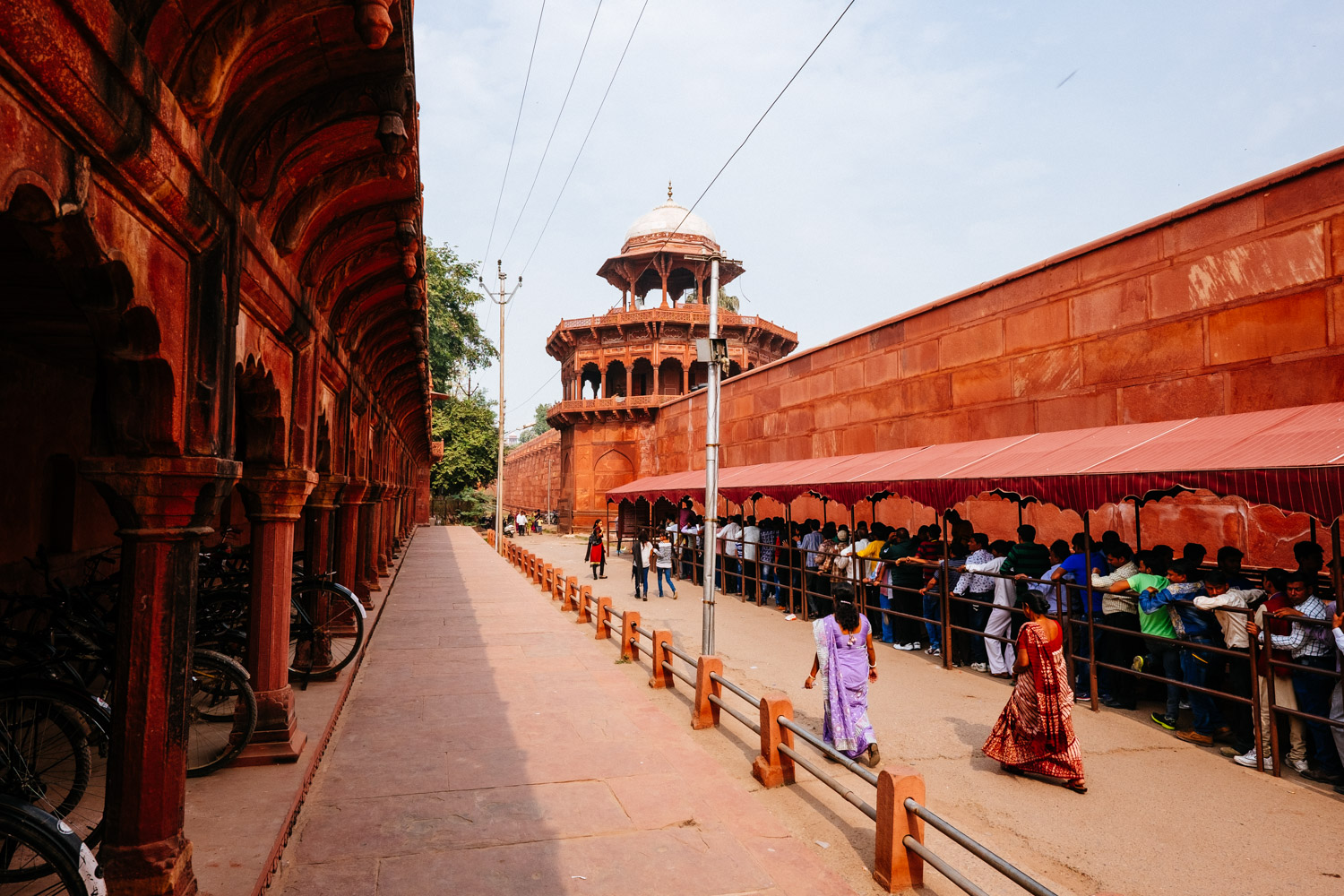 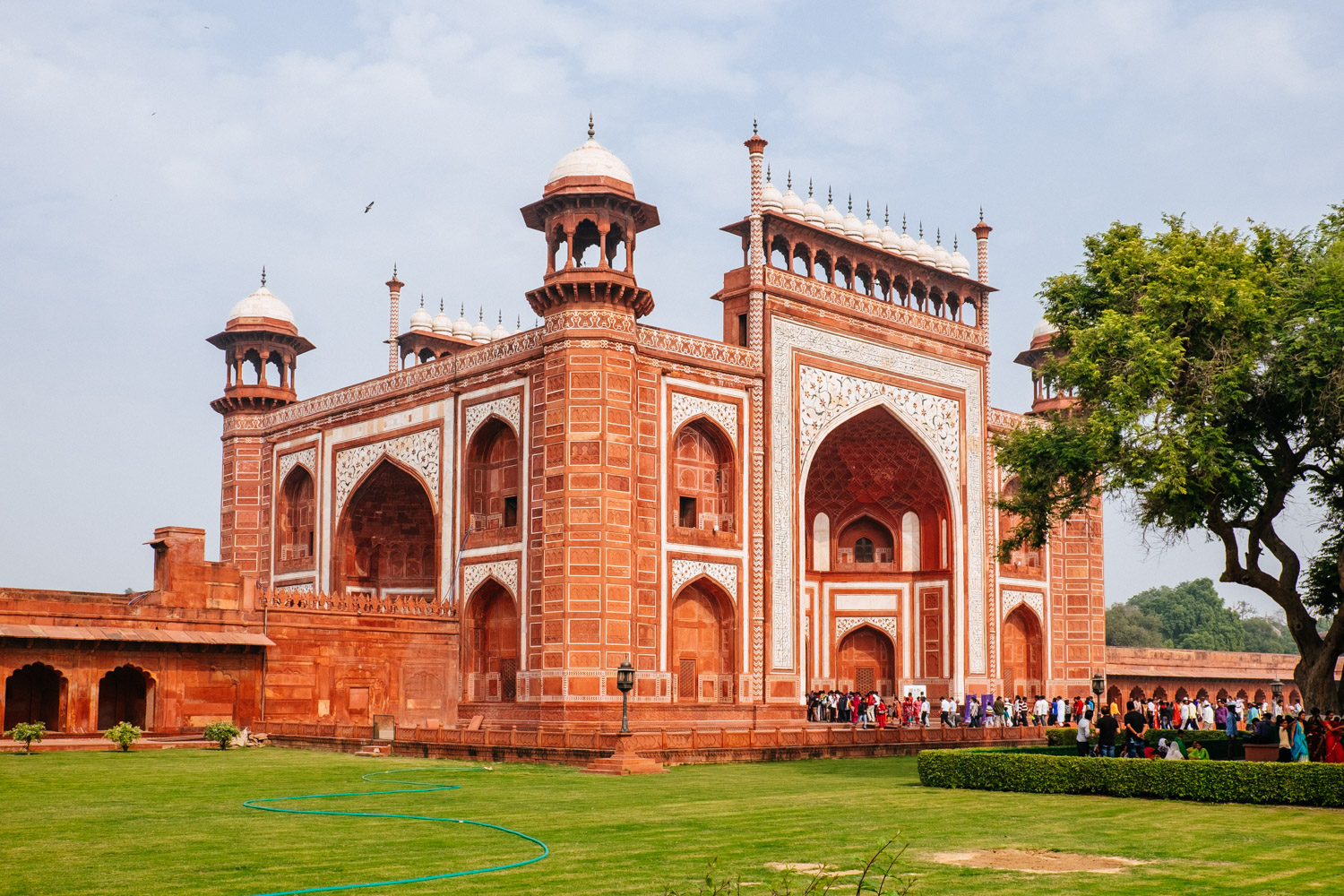 I think almost everybody in the world knows this building. The gigantic tomb made of white marble. It’s one of those iconic things where you can close your eyes at any time and your brain will reconstruct it for your inner eye even if you never saw it in person. It’s like the Matterhorn or the Eiffel Tower. On the long way from New Dehli to Agra I had the clear picture of the Taj Mahal in my mind but I worried regarding the light because we would arrive at noon.

It was not s bad as I feared and the temperatures were rather pleasant. Very warm but not soaring hot. In my earlier visits to India I managed to come at the worst time of the year just before the monsoon rain.

Outside people were queuing up and I was prepared to wait forever to get in but our more expensive tickets allowed us to bypass the long waiting line. It still felt awkward to pass all those people. 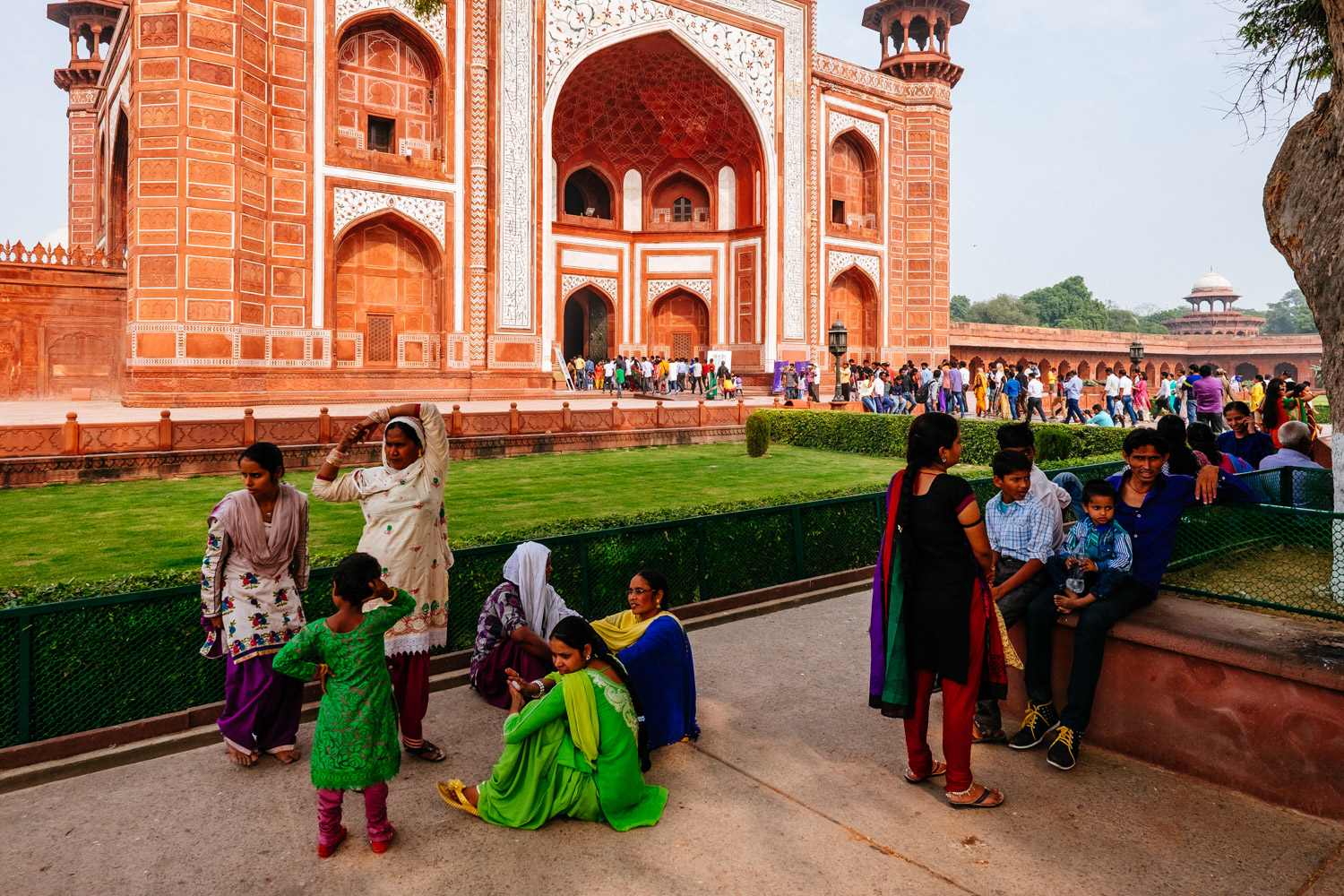 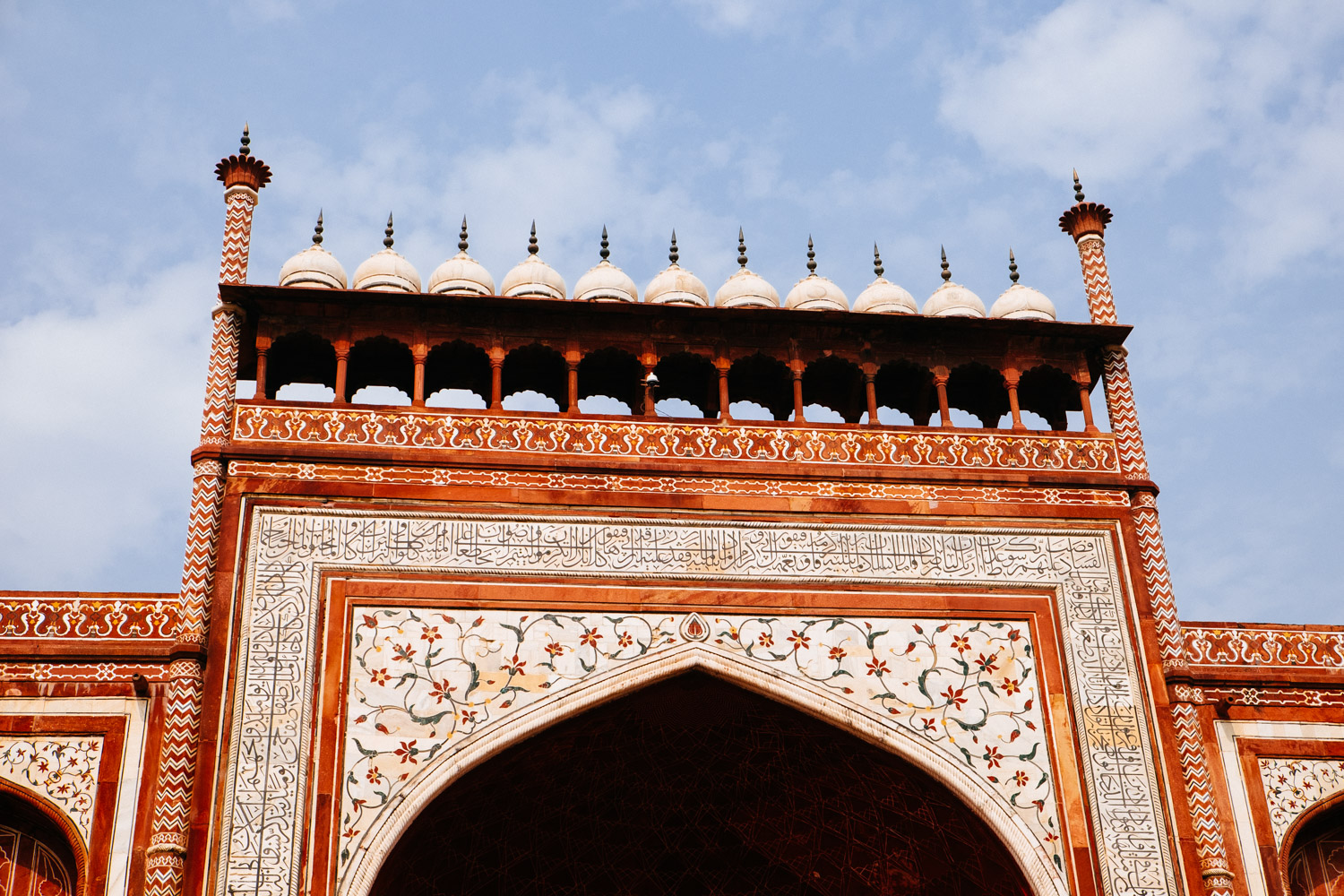 All my worries about the poor light, the wrong time of the day and the wrong day of the week disappeared when I first saw the Taj Mahal through the gate. For a moment I forgot the masses around me. The beauty of what I saw gave me goosebumps. What an amazing sight! It was like a shock.

But there was no time to stand there and stare. I was forced to hurry to get the classical “Through the gate” shot. Thank god I brought the kit zoom. It’s 55mm was just long enough to perfectly frame the Taj Mahal with the entry gate. There is no way that I would haven been able to get the shot with the 27mm or 35mm lens. For this kind of picture you need a certain kind of compression and I was glad that 55mm was good enough. And the fact that 55mm is still relatively short helped to include the silhouettes of the visitors that entered the gate.

The shot looks simple but it was hard to take. First of all because I was still in awe and second because I was not alone. There was a constant stream of people entering the gate that pushed me forward. Not literally but it is hard to stand still if everybody around you is slowly moving. I walked to far to be able to get the gate into the frame so I needed to walk back against the stream of visitors to put myself right into the center of the gate building. People were passing me left and right. Smartphones and cameras were raised right in front of me so I needed to wait for the right moment when my view was unblocked. I took a couple of images to be on the save side. The one below is my favorite because of its perfect frame and because the visitors right in front of the building give you an idea about its size.

Before I saw it in person I had no idea how huge and how beautiful the Taj Mahal is. Now I know. A true chicken skin moment. 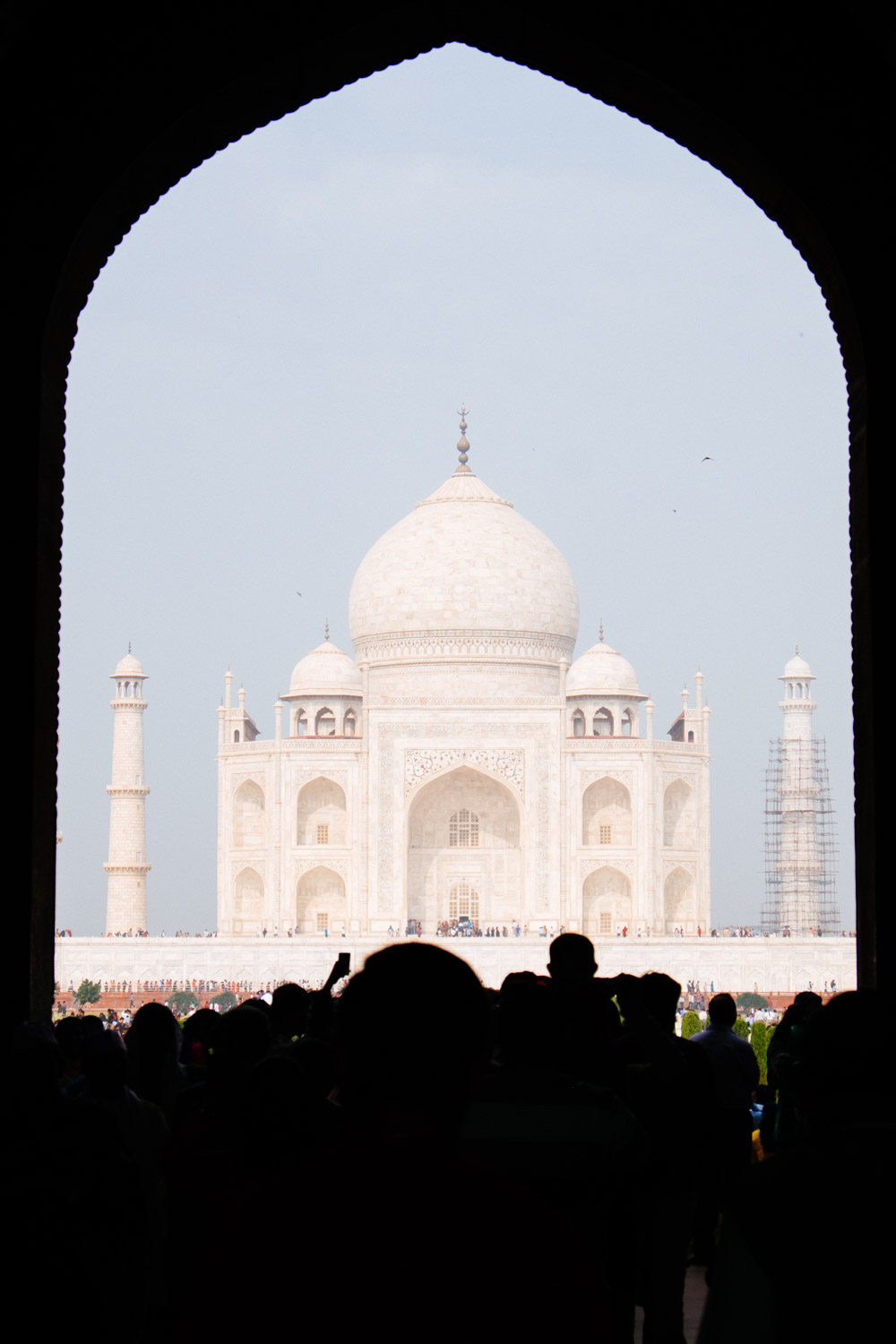