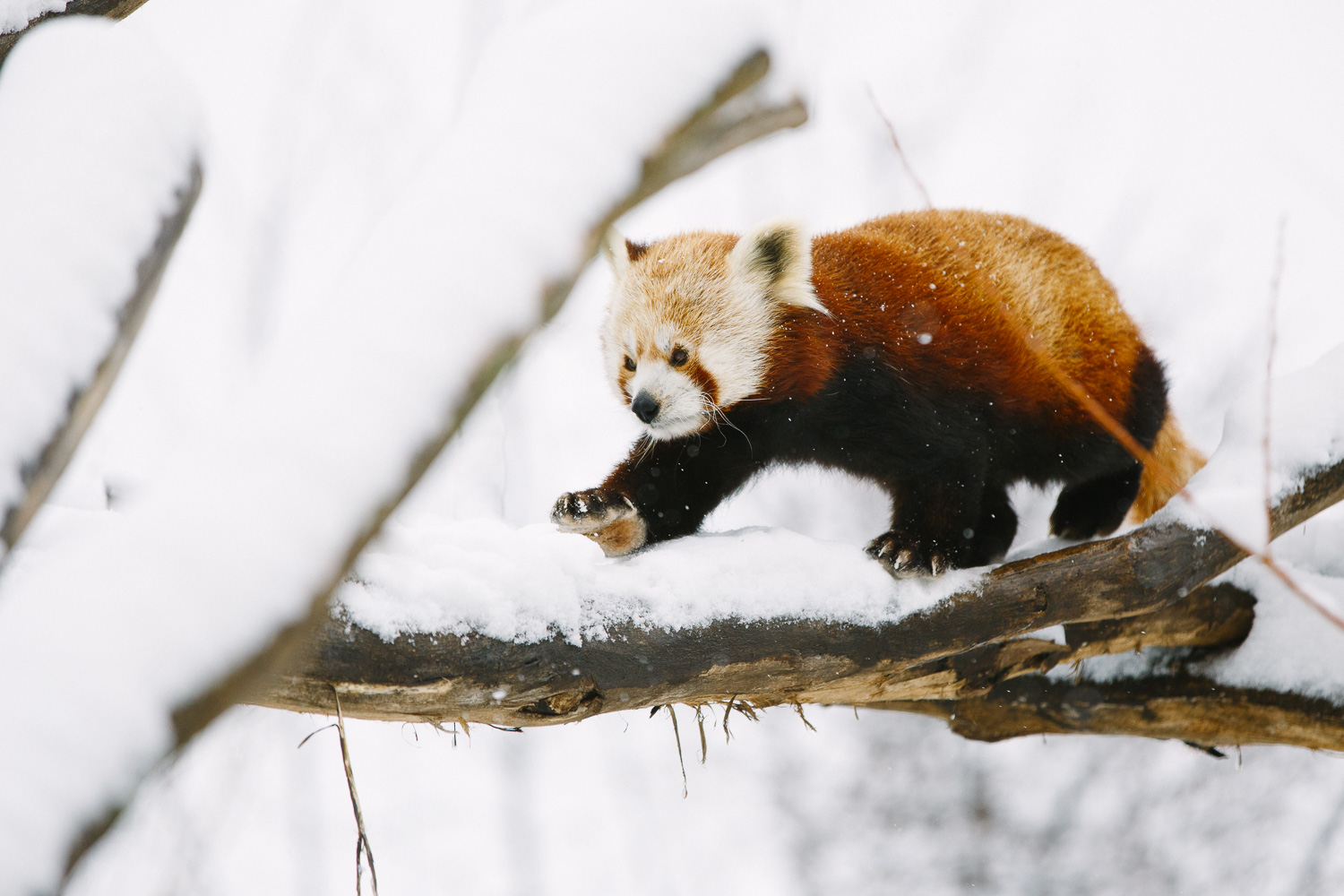 Another couple of shots from my visit to the zoo after heavy snow fall. I think I have mentioned that before a couple of times. Best time to come here is in winter right after or during a snowstorm.

One of my preferred subjects are the red pandas. Less famous the great panda bear and no bear at all. They are more like cats with super large paws. Their closest relatives are raccoons. 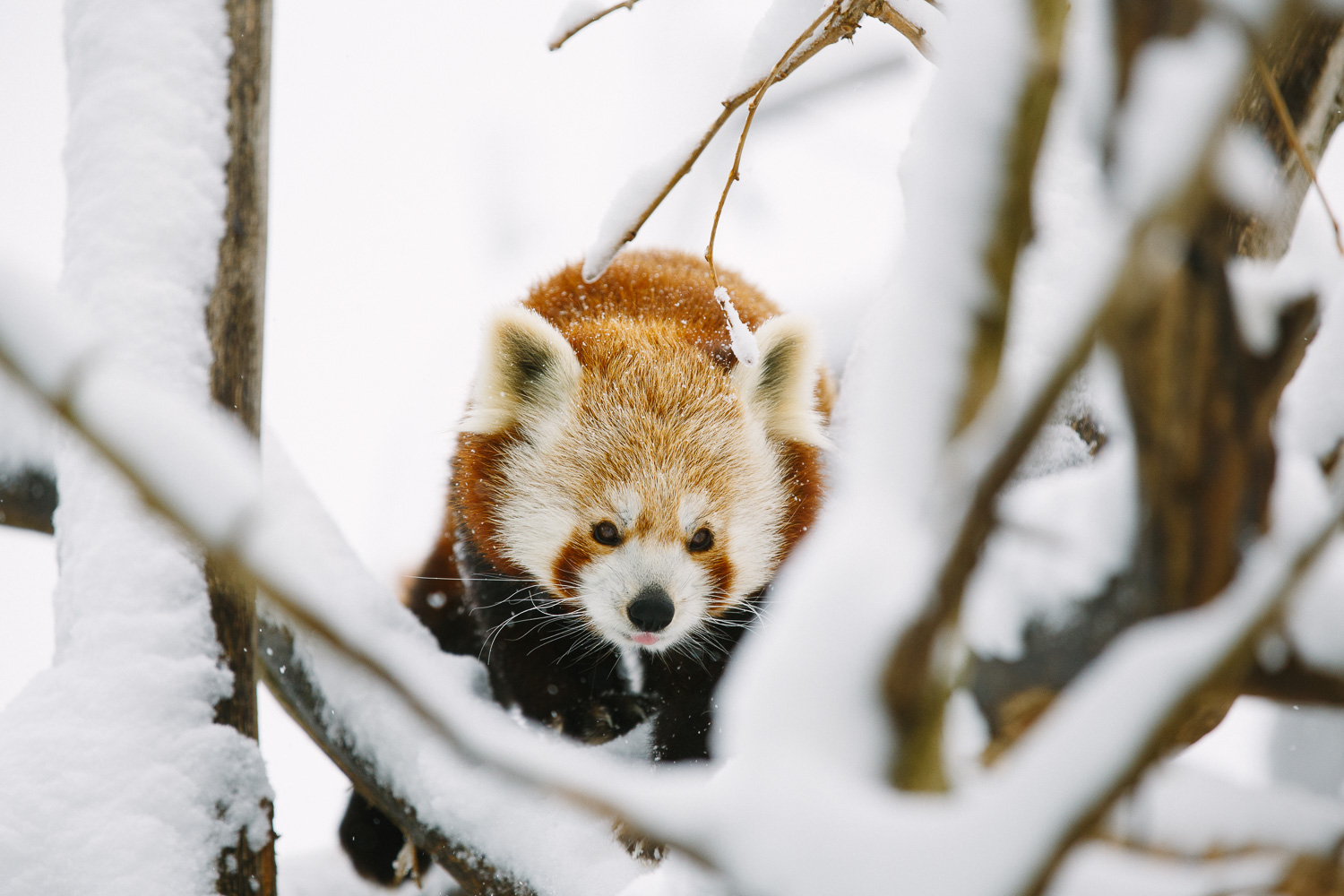 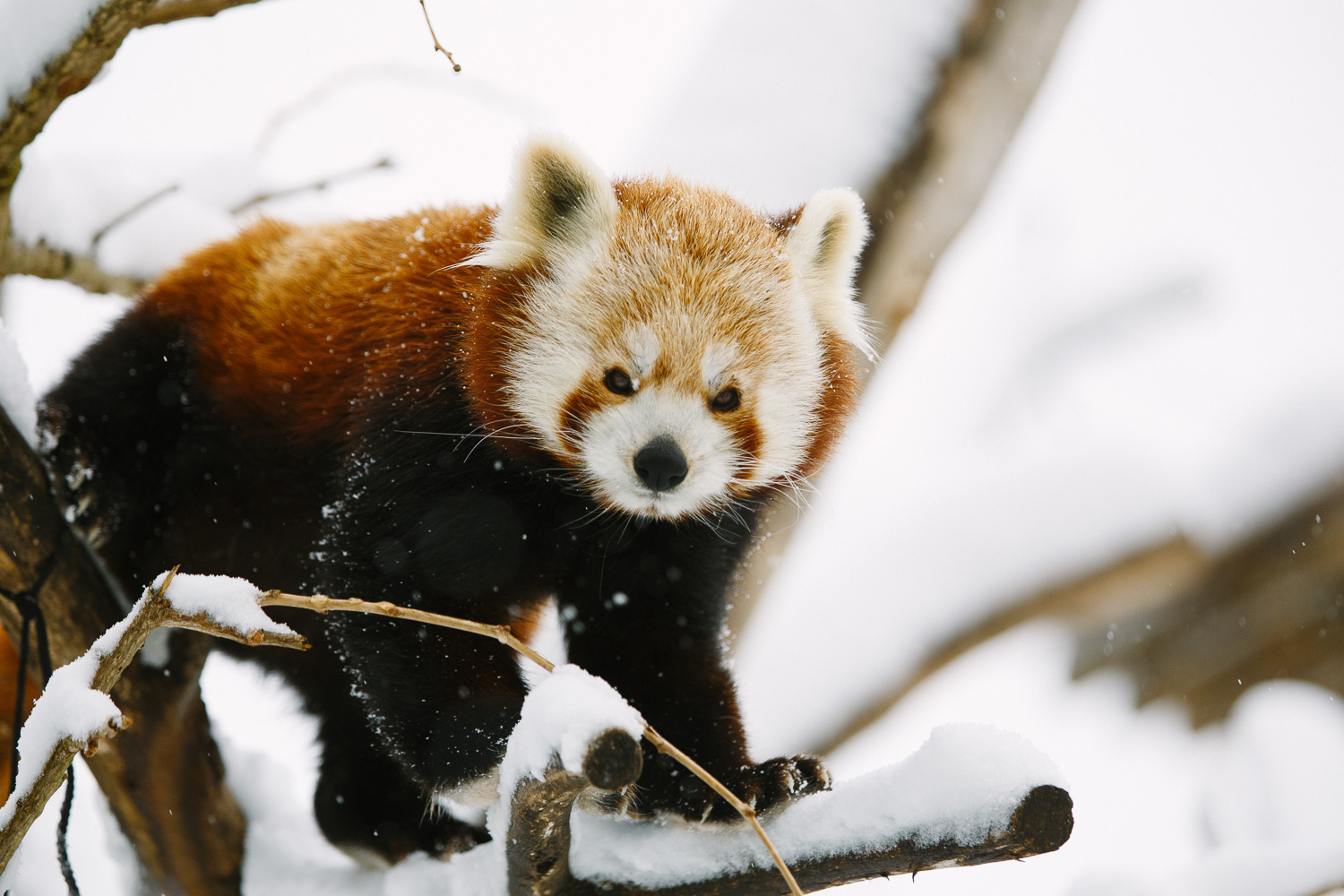 They live in the Himalayas so they are used to snow and they don’t like warm temperatures because the easily overheat. That’s why the red pandas in the zoo in Vienna sleep most of the time during summer. Another reason to come to see them during winter beside the fact that they just look amazing in snow.

The Canon 2.8/70-200 IS II plus the excellent Canon 1.4 mk III teleconverter work just perfect on the Canon 6D. The combo gives just enough reach and is fast enough to blur busy backgrounds. 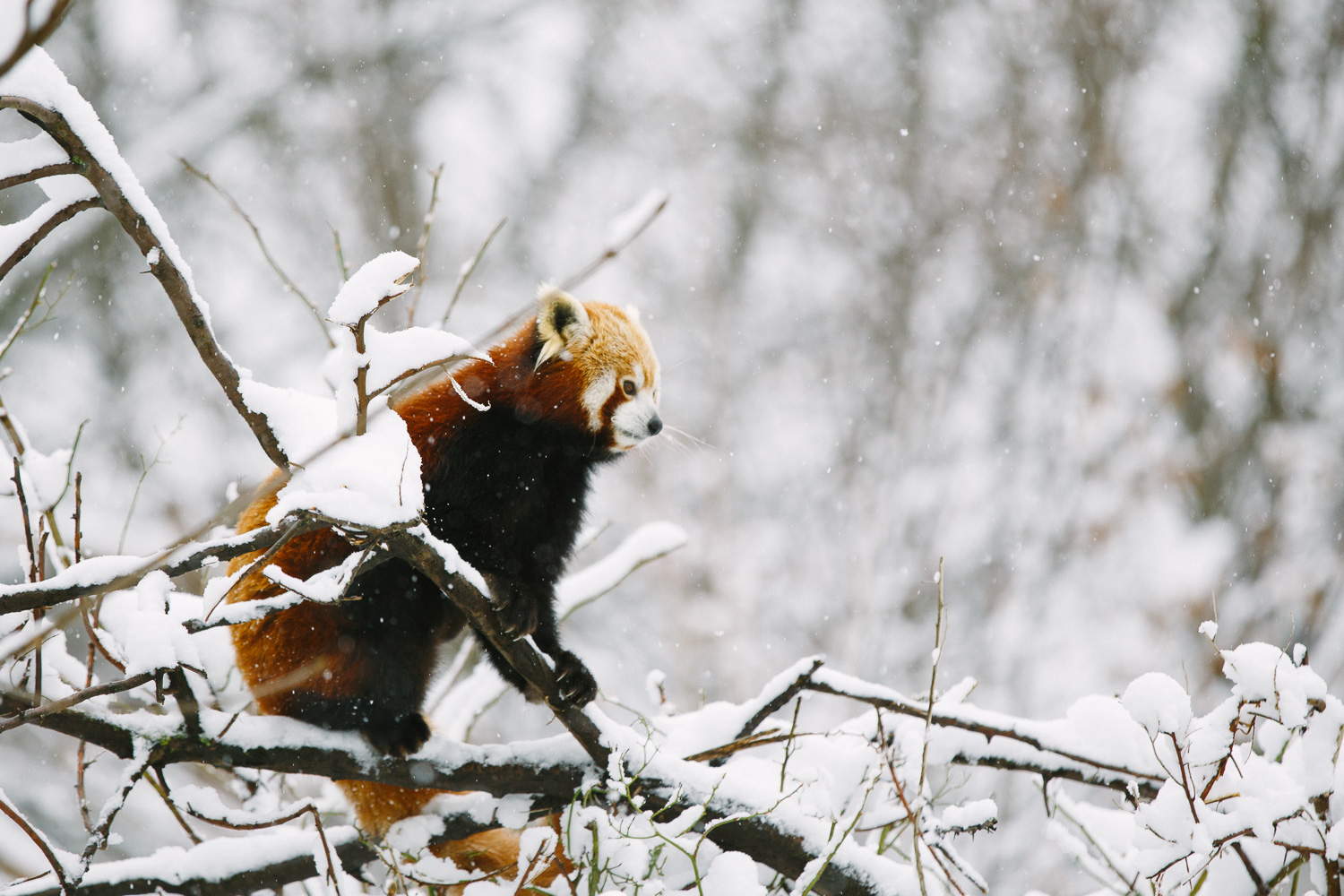 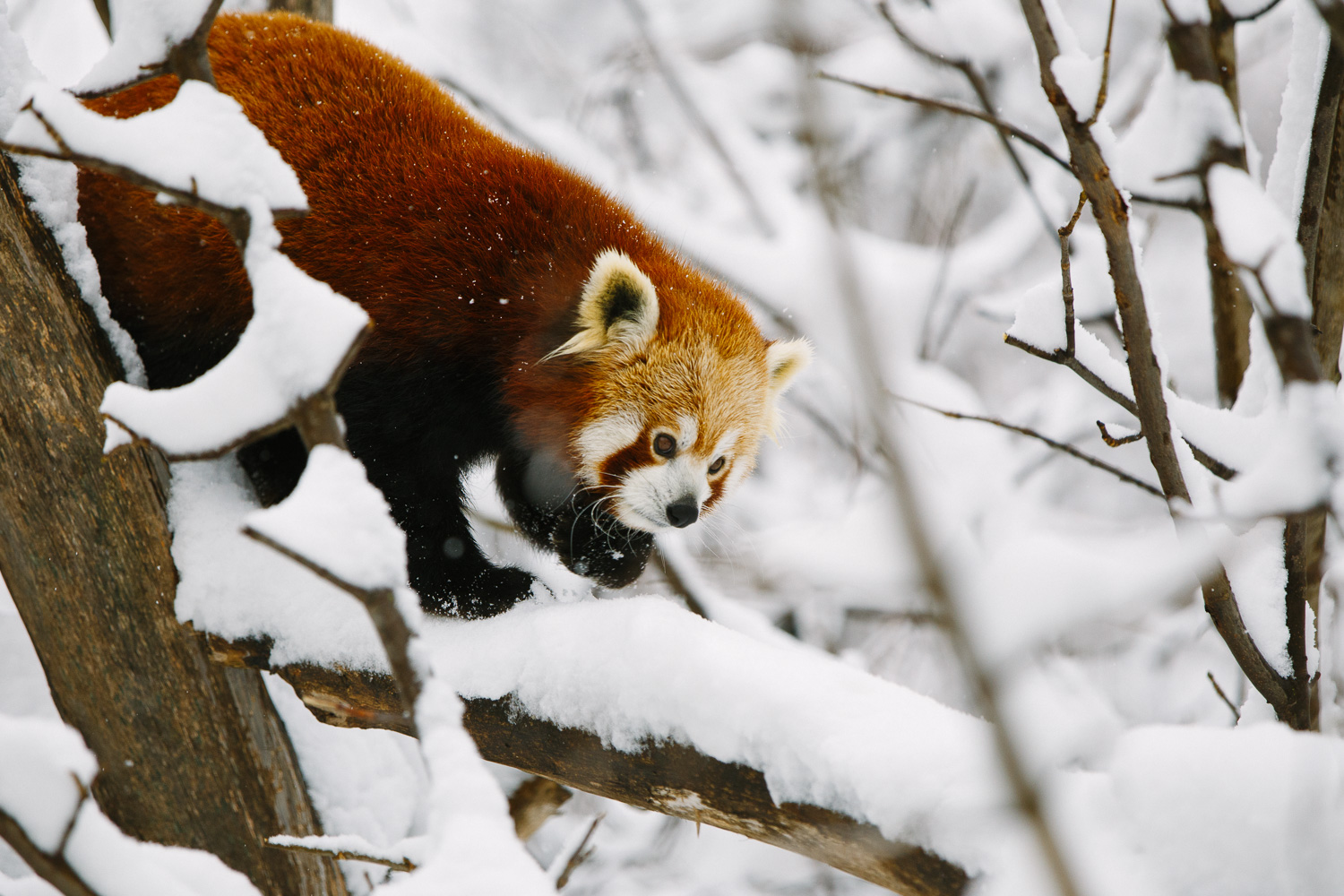 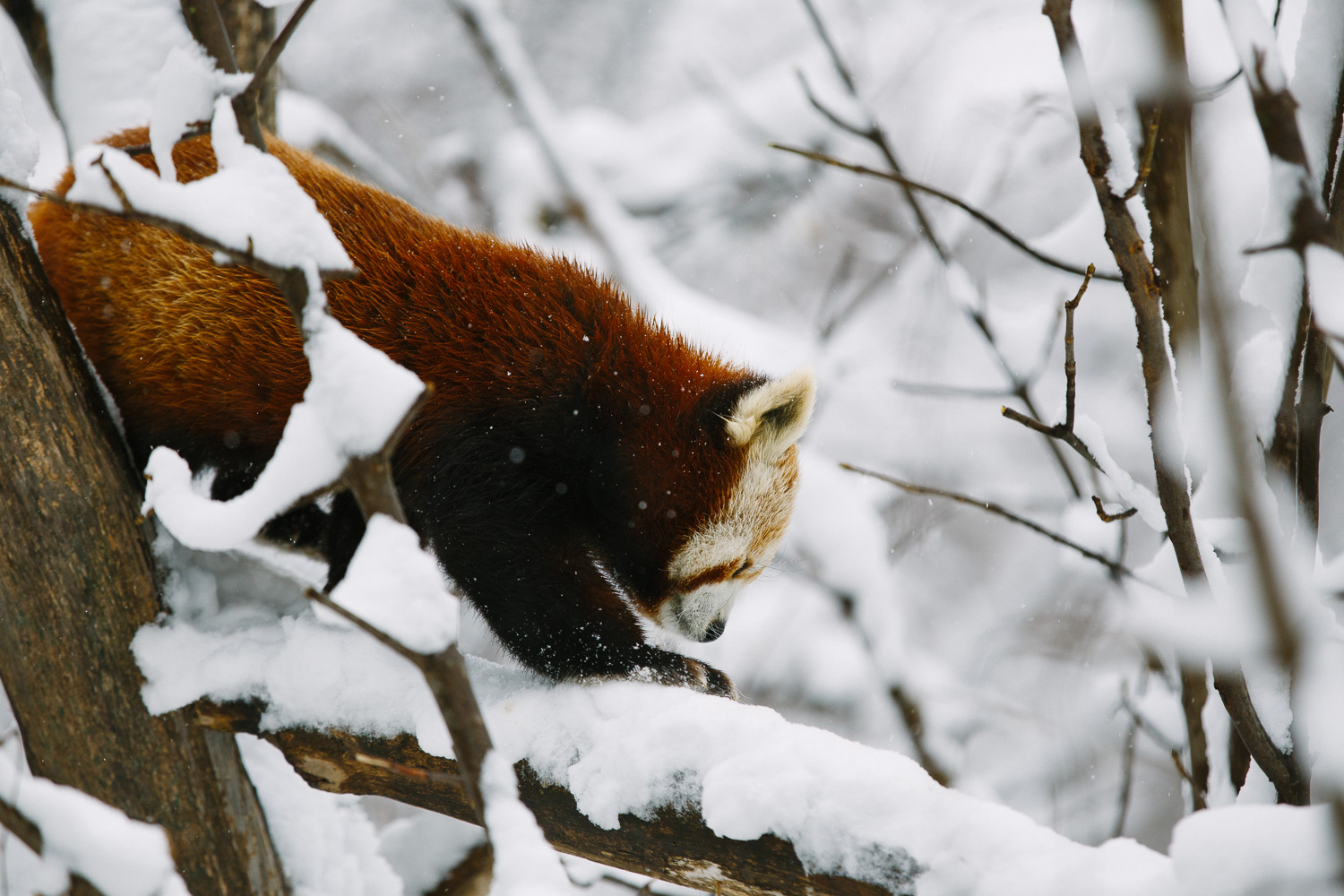 Maybe you wonder about the EXIF data of the shots. Why did I shoot at ISO800? Why such a fast shutter speed for “slow action”? The answer is simple. I was shooting in full manual mode. I always use manual mode with long lenses especially if there is snow too avoid erratic exposures.

With long lenses you look at only a small part of the scenery. That’s the biggest difference to wide angle lenses. With wide angle lenses the mix of light and the dark parts of a scene result in a balanced exposure. With long lenses there is a high chance that the dark or the light parts of a scene dominate and result in incorrect exposure. The fur of the red panda is dark while the surrounding of the panda is extremely light. Of course you can still hope for balanced exposure in auto mode but depending if the panda is small or large in the frame the image will be either under- or overexposed.

The better option is to change to full manual mode. That’s what I did here. I chose the fastest aperture f4 to blur the background and a shutter speed of 1/800s to stop subject motion (I was shooting birds before I went to shoot the pandas). Than I set ISO to ISO800 to get the correct exposure. A quick check of the histogram to confirm – done.

After this simple preparation I do not need to worry about exposure compensation anymore. All images will be exposed correctly no matter if I take a closeup of the panda (which would result into overexposure of the snow in aperture mode) or if the panda fills just a small part of the frame (which would result in underexposure in one of the auto-modes). Now the only thing I need to watch is if the level of light will change because of i.e. dark clouds and compensate for that by adjusting the shutter speed to the new situation. 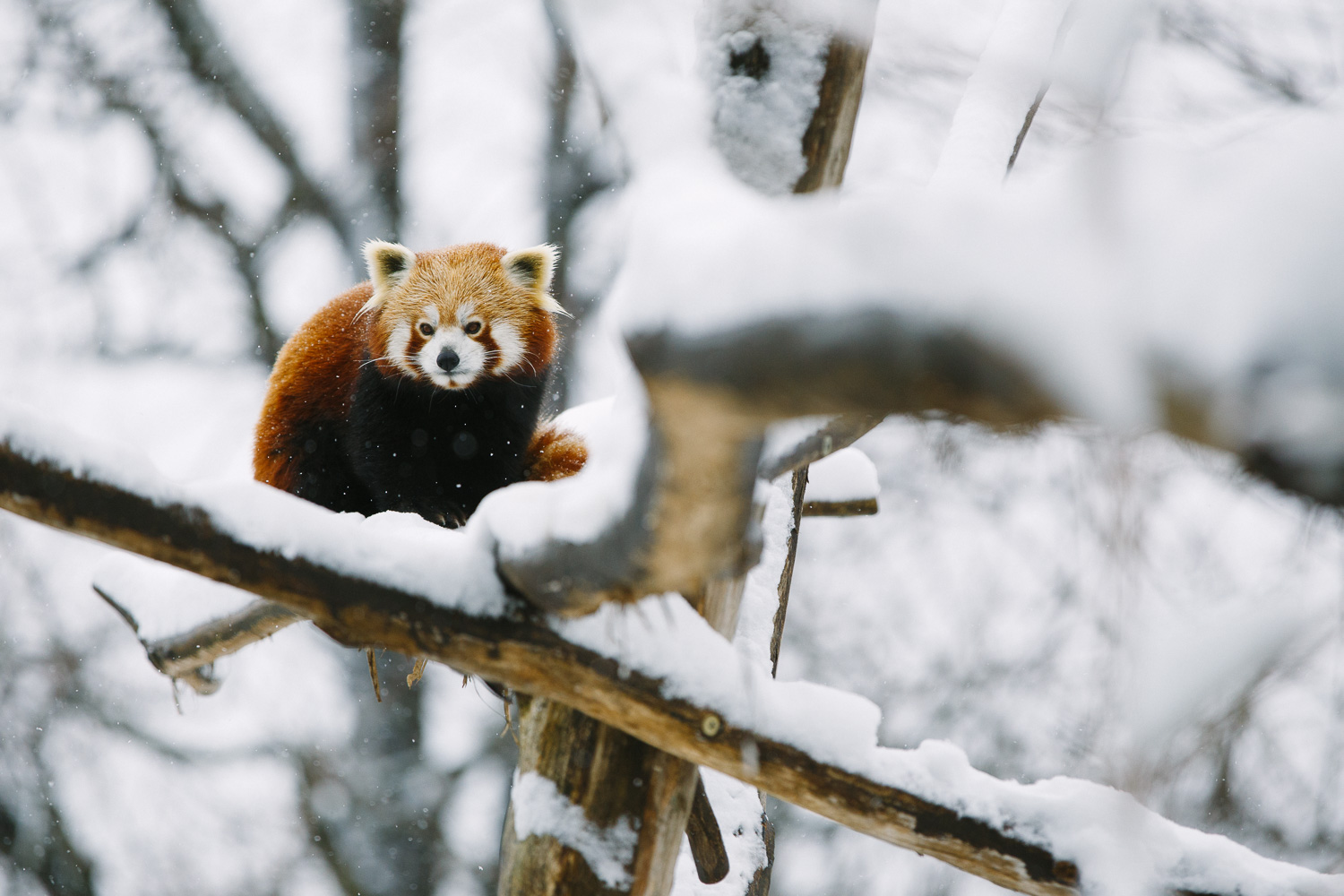 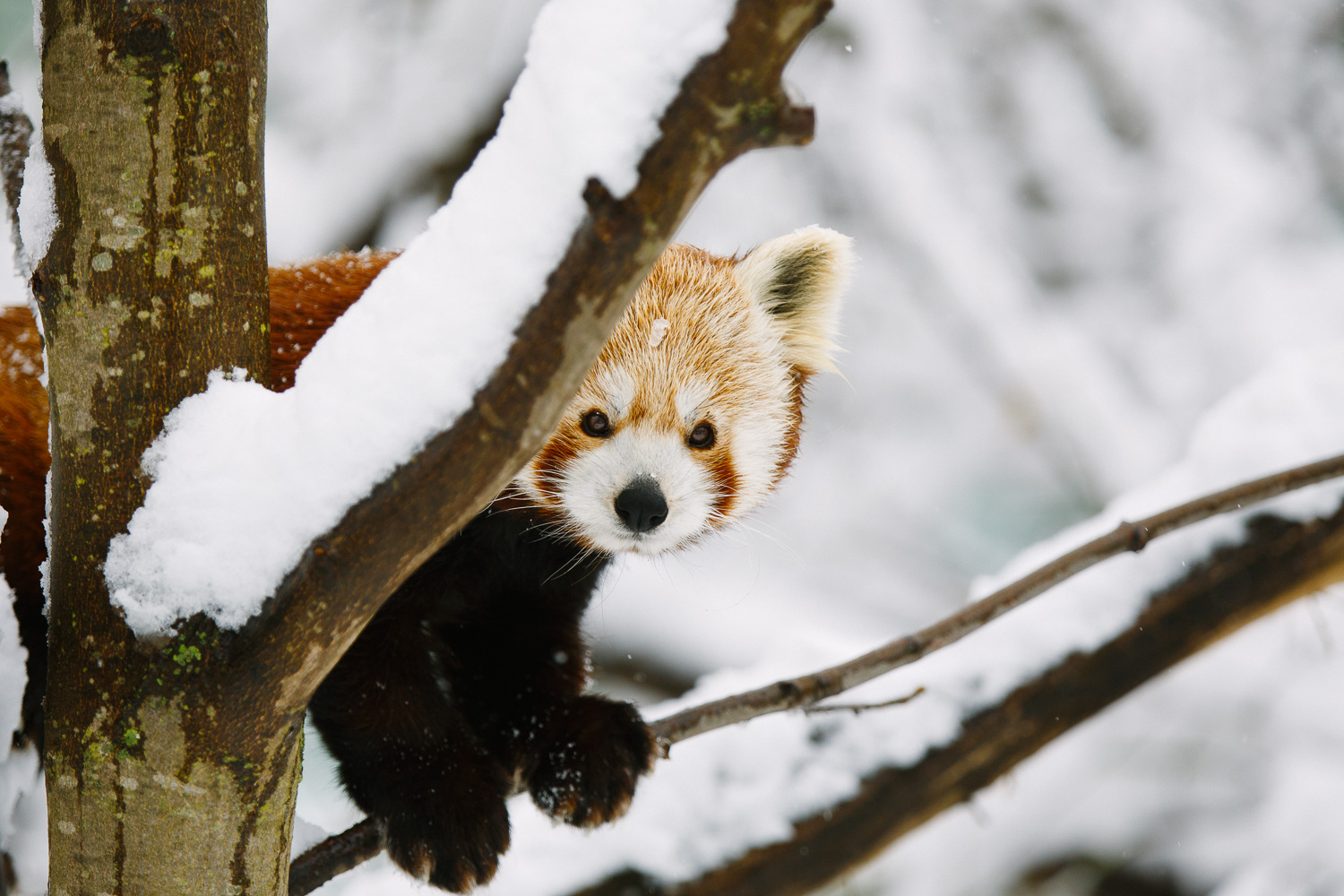 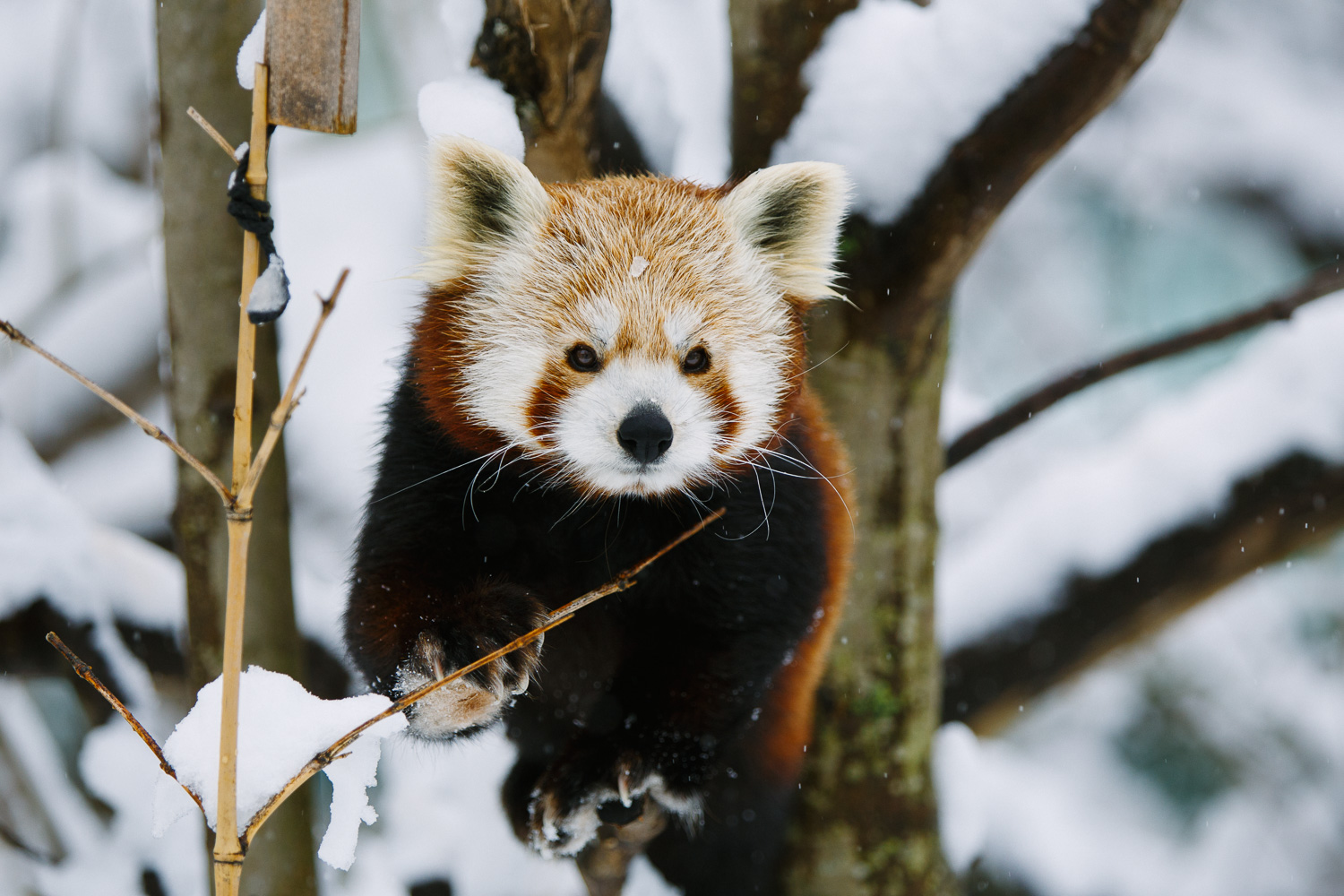 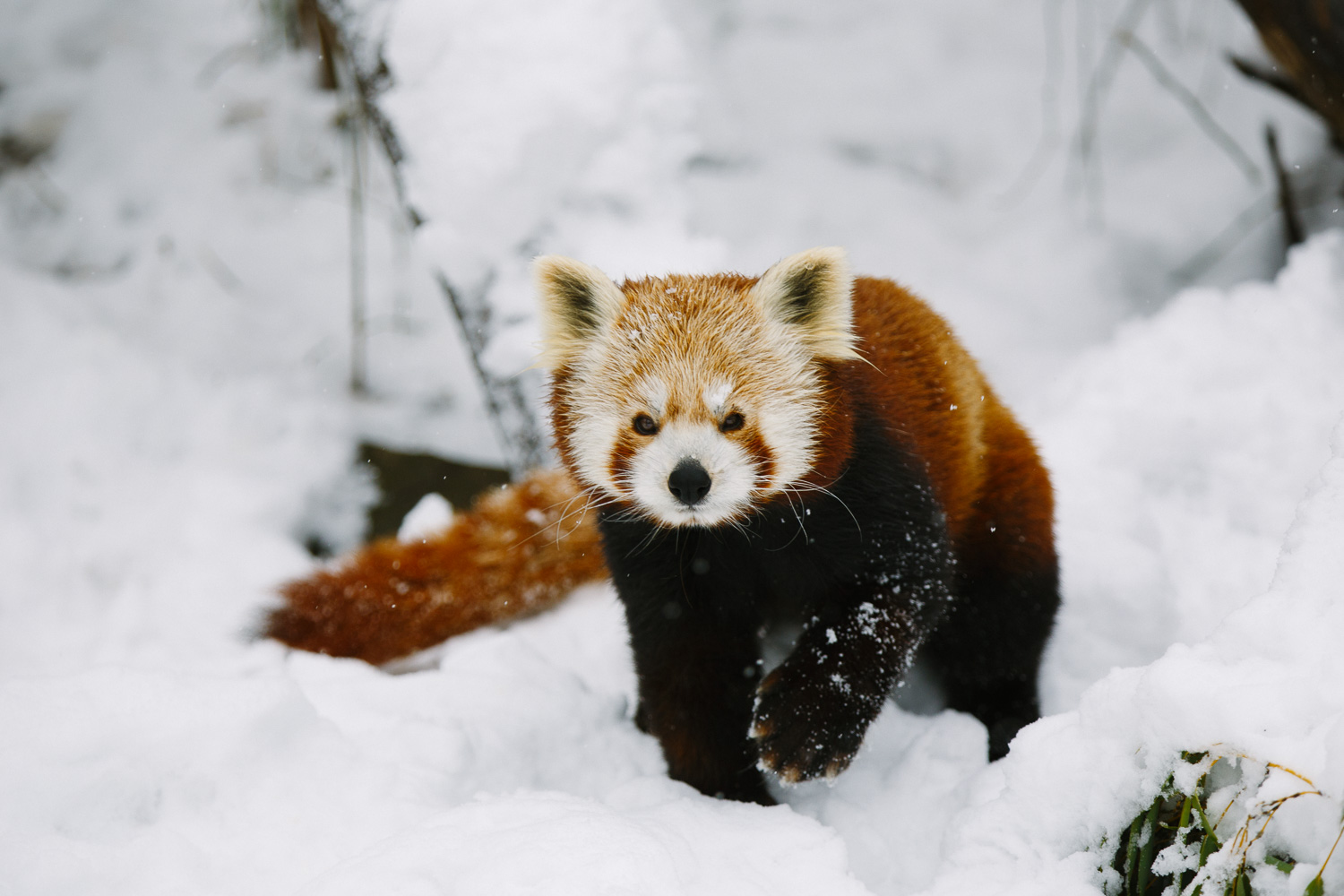 It’s amazing how reliable this simple technique works but how many photographers still prefer to shoot in auto-mode and set exposure compensation for every single shot.

I strongly recommend to change to manual mode in such conditions. It is a great thing to be able to forget about exposure and to focus on composition instead. I had enough to do to keep the constantly moving panda in focus. On such occasions I would love to trade my Canon 6D for a 7DmkII. The 6D is hardly an action camera and only its center AF point provides fast and reliable autofocus in low contrast situations.

The Canon 7DmkII would be an amazing camera but I don’t like the idea to spend so much money on a DSLR with a crop sensor. A couple of years ago, when I was a passionate bird photographer, I would have killed for such a camera. Especially for the high pixel density, excellent high ISO and fast frame rate. Today I think I will rather save some money and weight and get the Canon 70D instead. 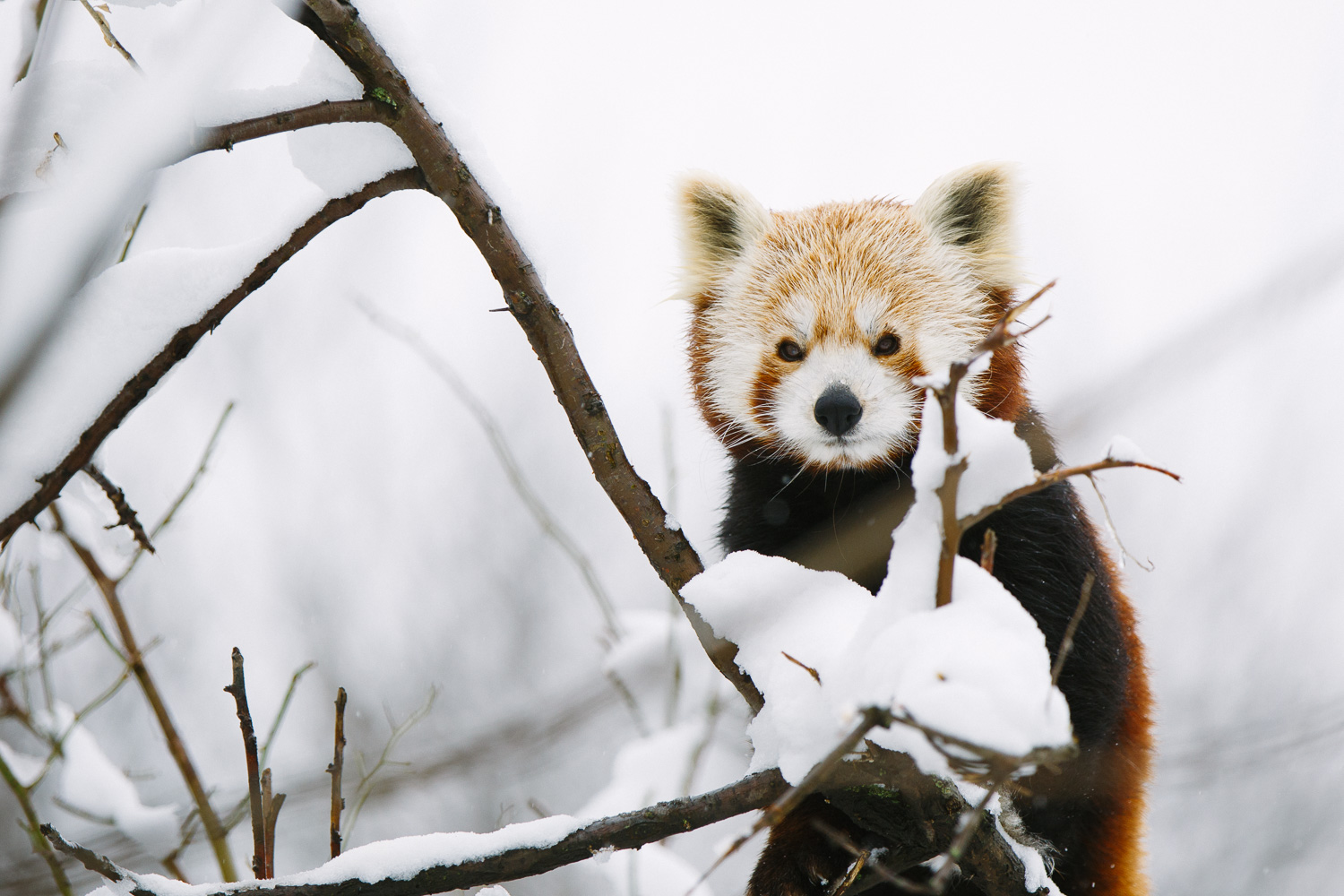