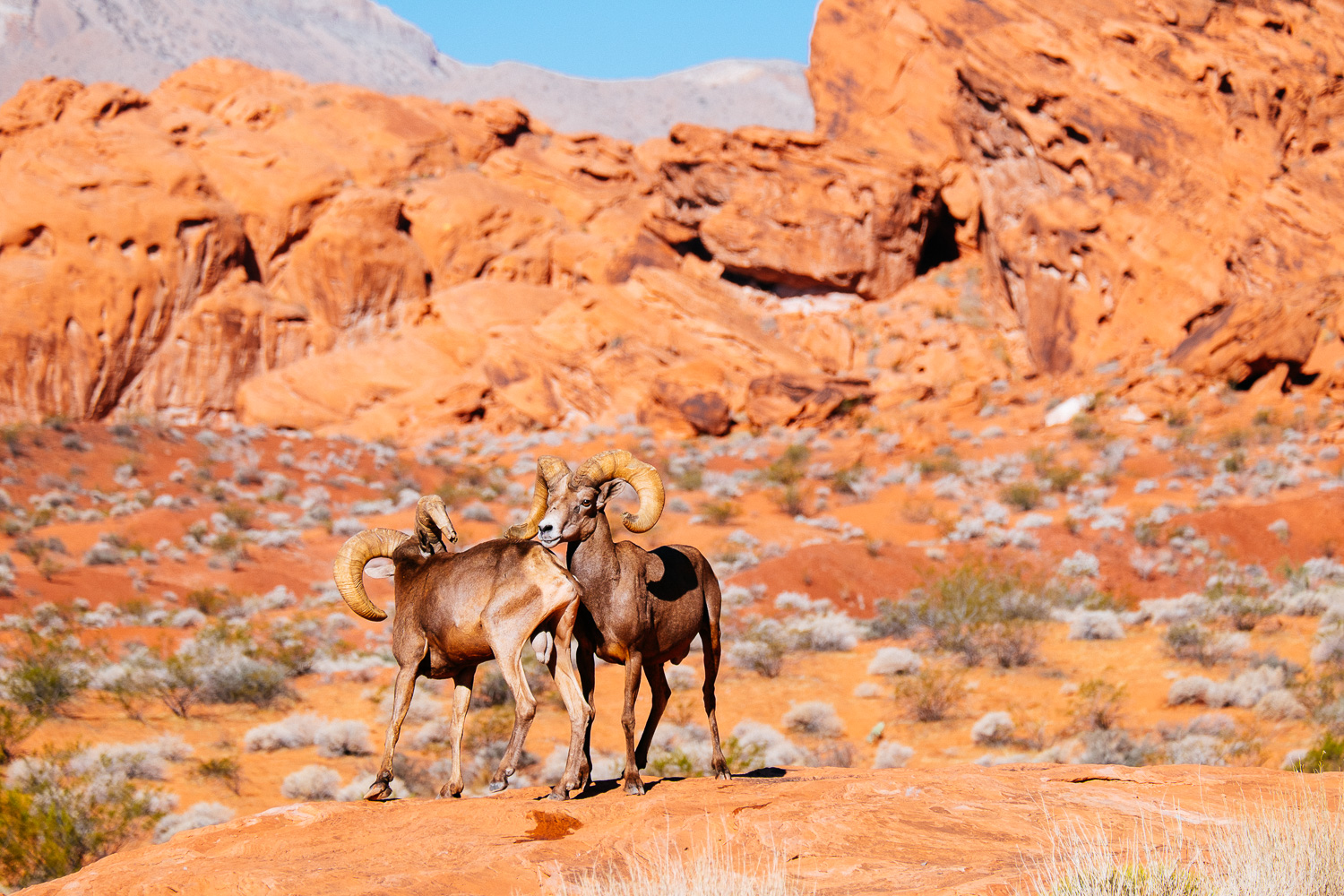 Just one hours drive outside of Las Vegas. The Valley of Fire State Park. You can easily miss it on your way to Bryce Canyon but you shouldn’t. What a place!

We arrived there very early. The tourist info just opened and we went in but when I looked outside I spotted a big horn sheep close to the parking lot. Of course my telezoom lens was sitting in the Streetshooter bag in the trunk of our car! So I went out again, get the lens and attached it to the camera. I didn’t think that the big horn sheep would wait for me but it did. 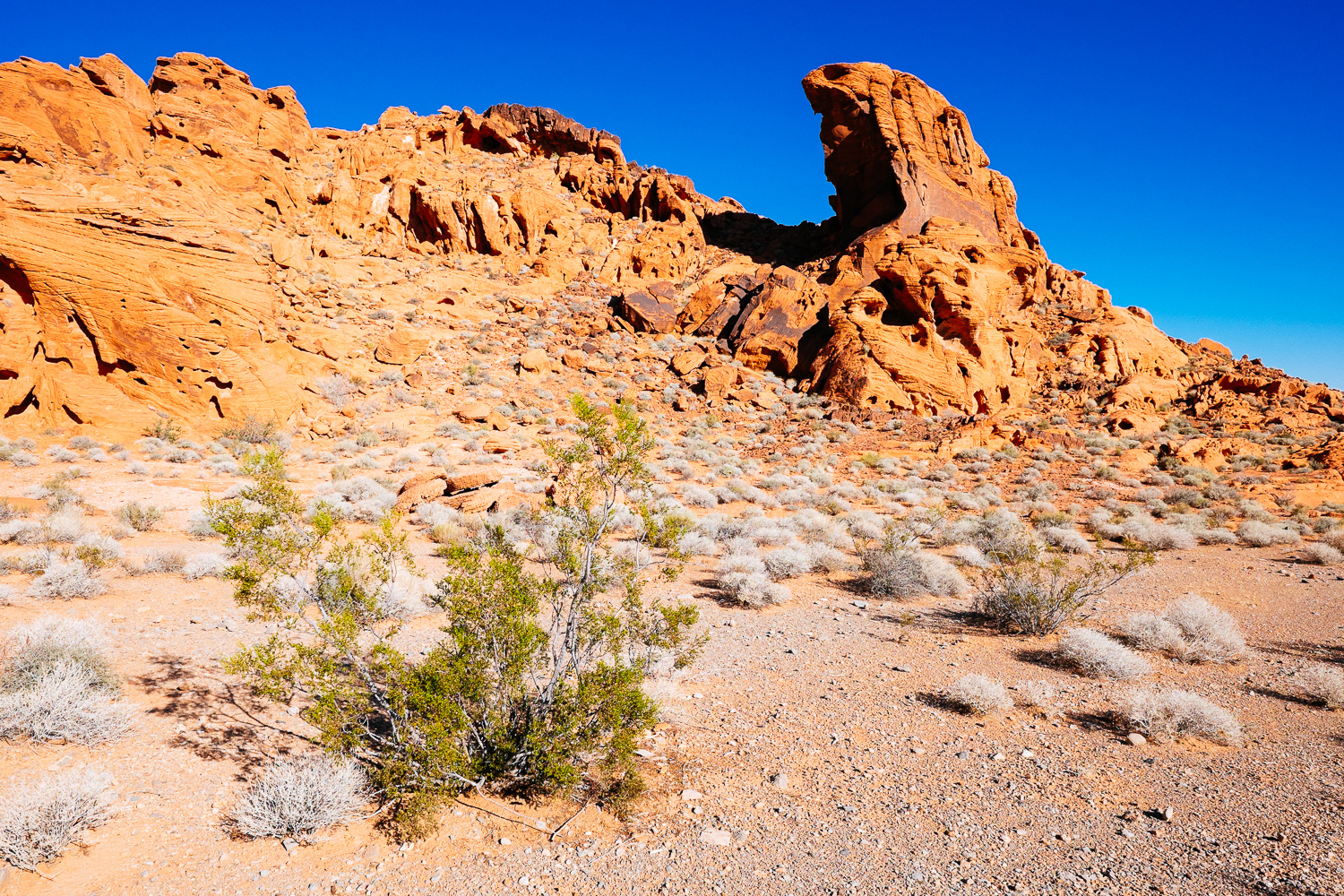 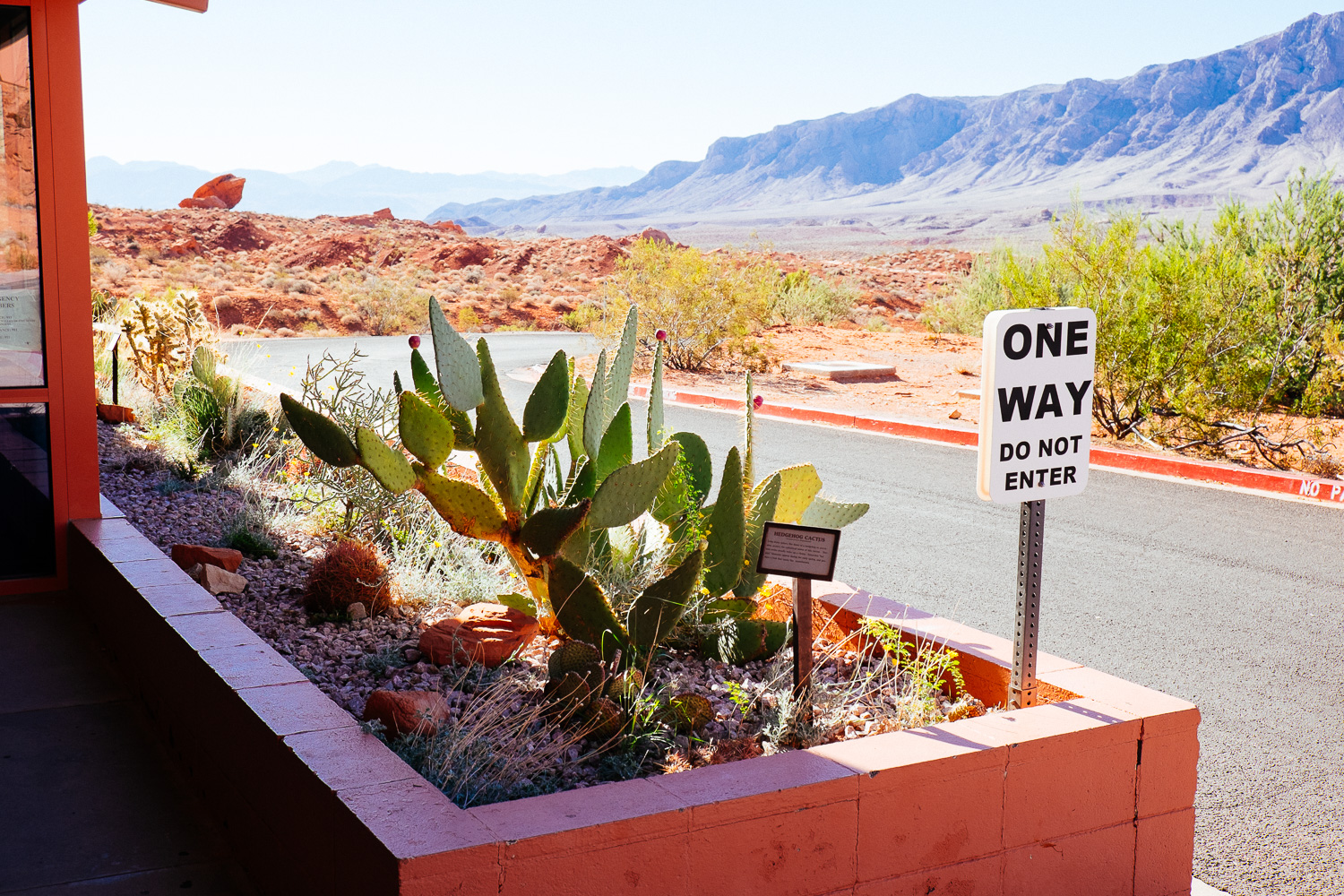 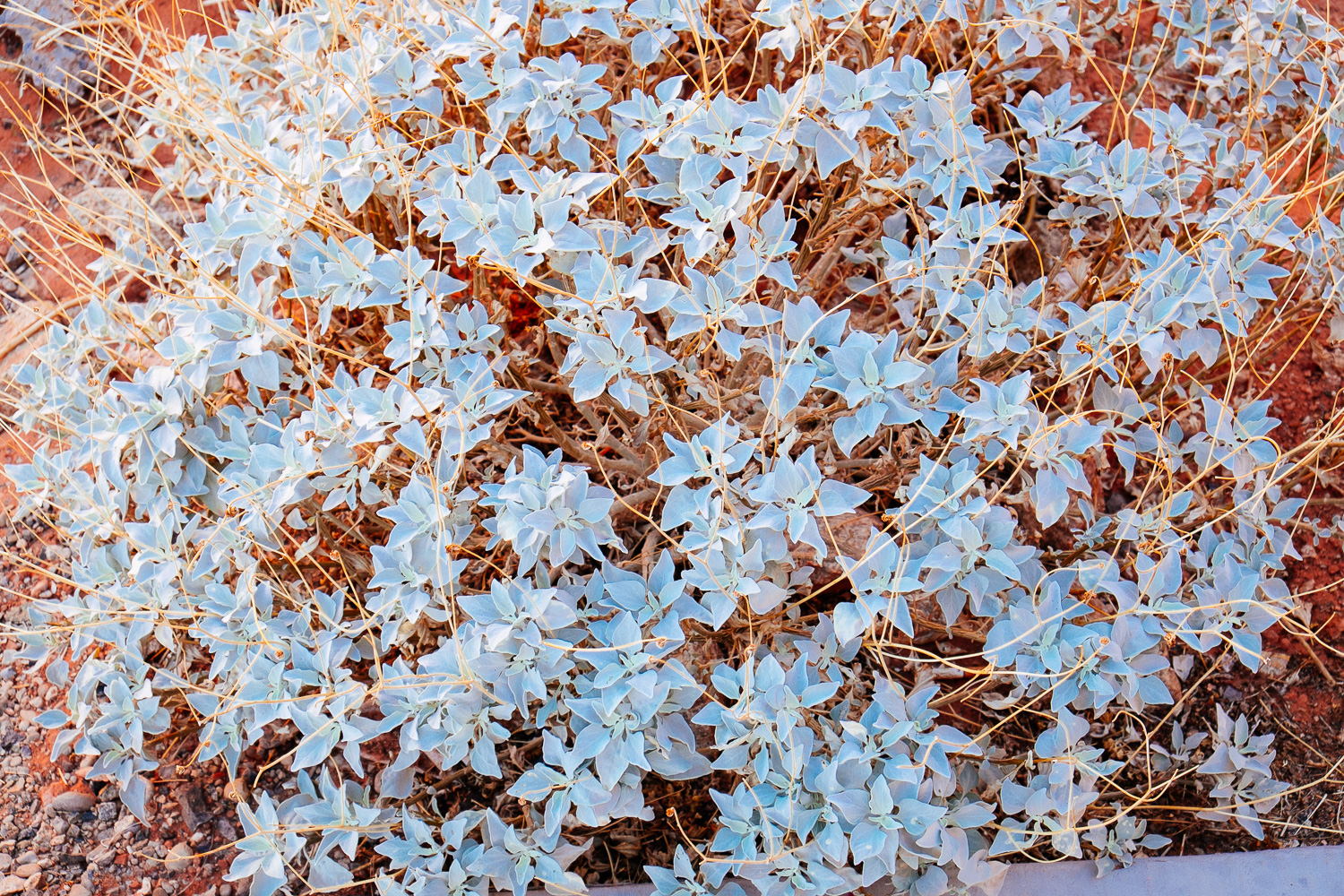 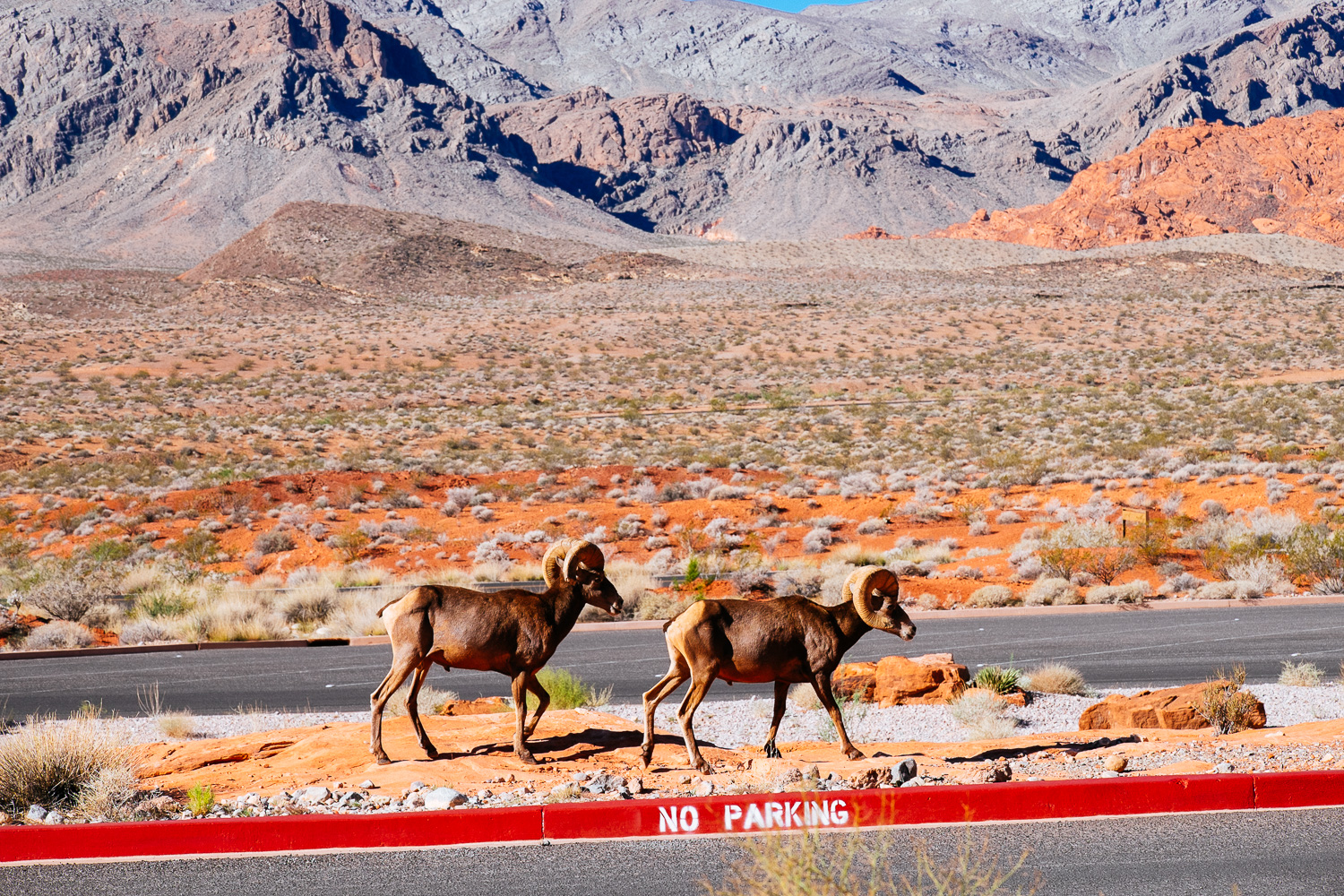 And there even was a second one. Both did not pay attention to me and another guy taking pictures. In the beginning we were even closer to them but both fore- and background was too busy for good shots. Luckily they both decided to have their little fight on a different location.

We followed too close for my taste but it is amazing how tolerant wild animals are in the USA or in Canada. You can’t do that in Europe. They would just run away the moment they recognize you. So if you live in Europe and you plan to make your living as a wildlife photographer you better emigrate to Northern America. But you need to be lucky to see wildlife just outside a tourist information. Of course being there early helps too. 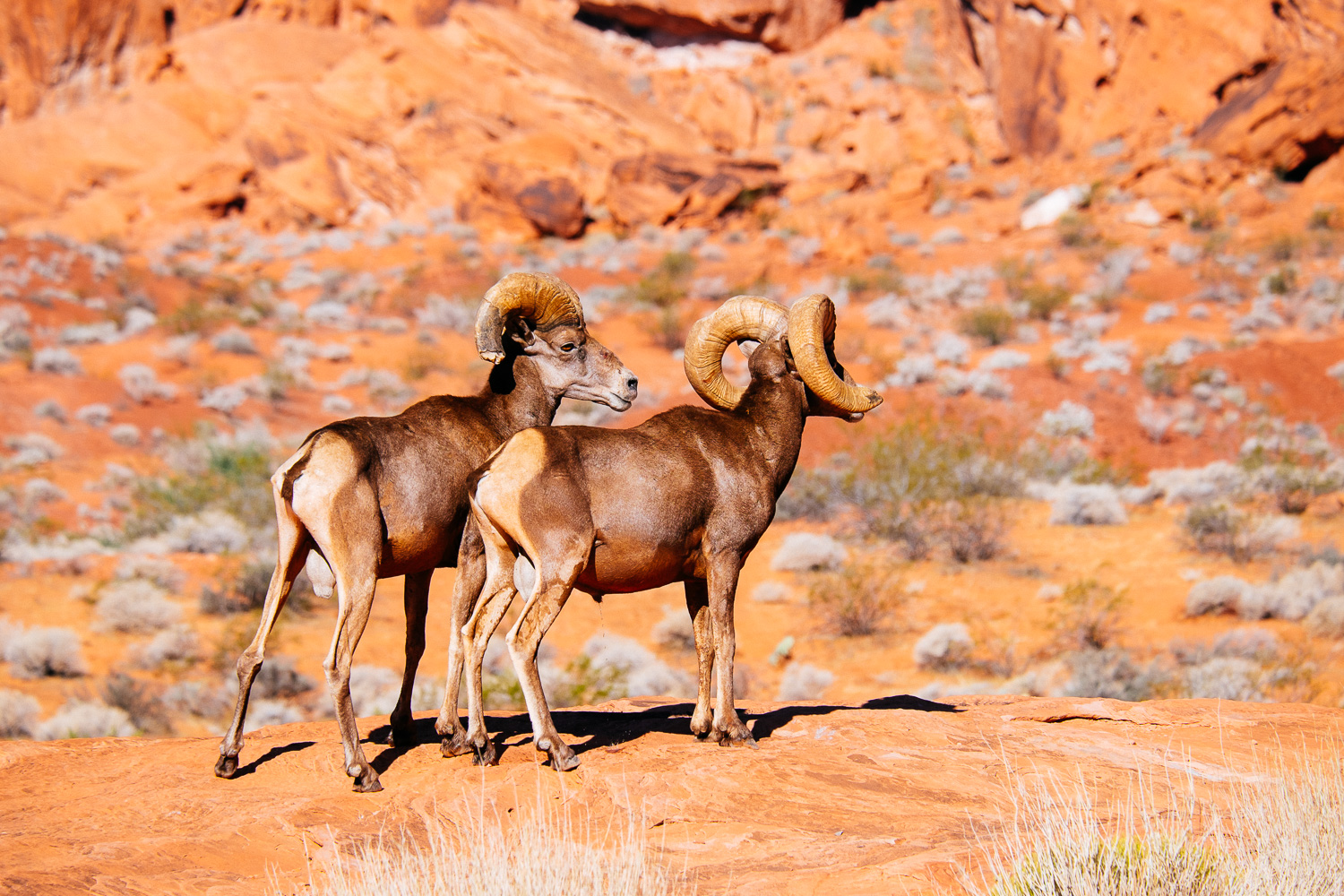 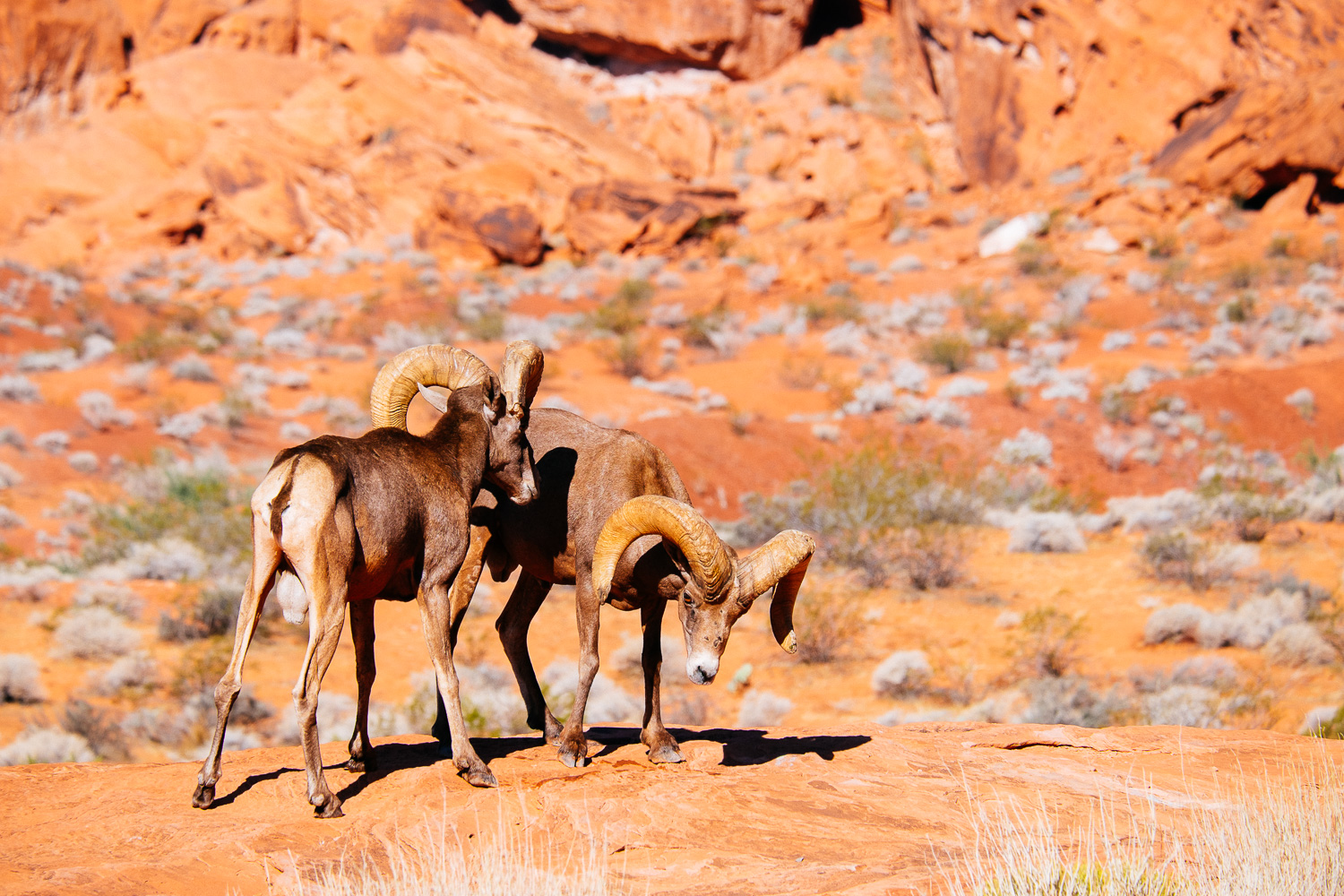 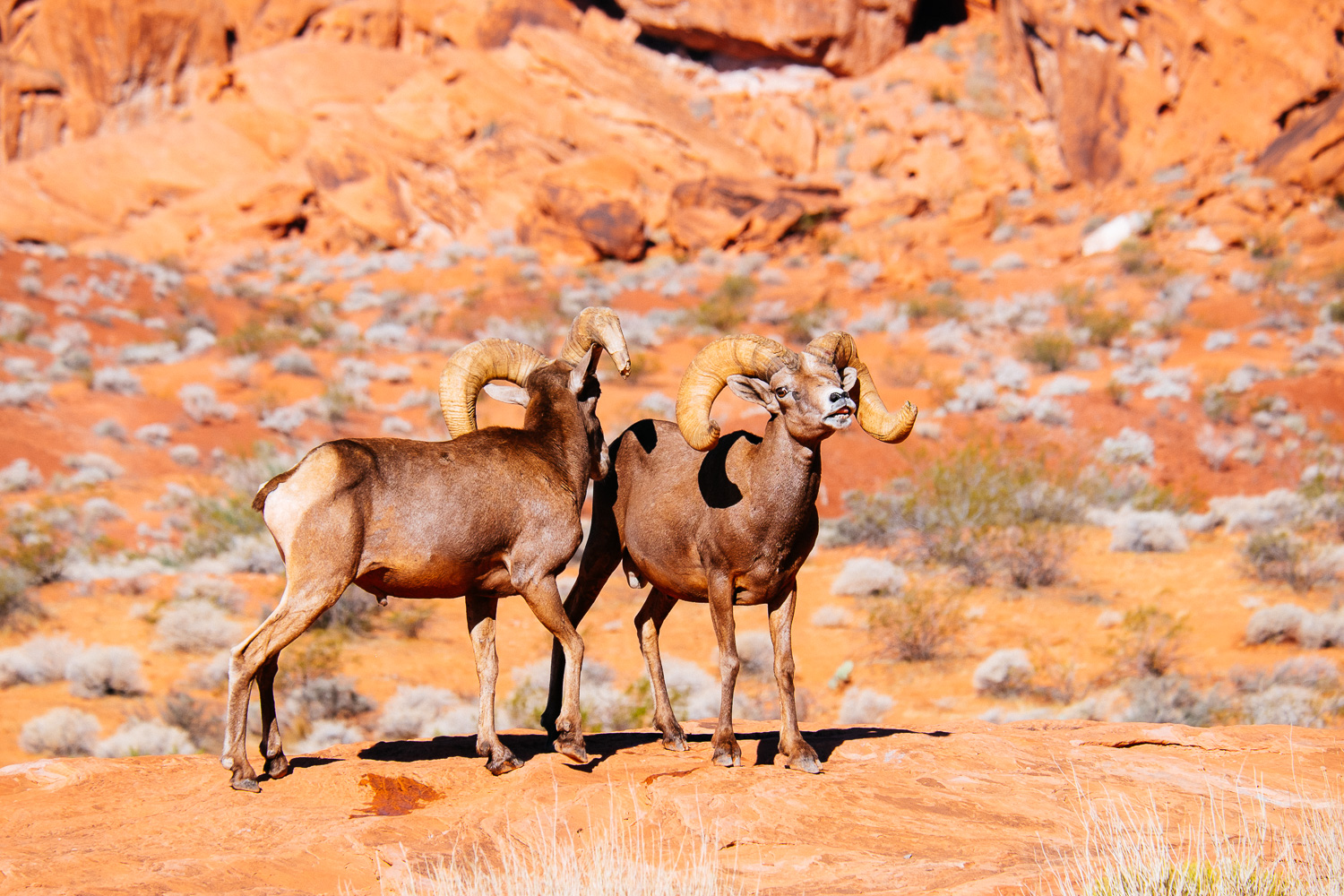 It was the first real test for my new Fuji XC 4.5/6.7/50-230 OIS. This is by far the slowest and cheapest lens I ever owned. Here is why I got it. I bought a Fuji X-M1 for my wife as a replacement for the Sony NEX to simplify post processing. On this trip we used three cameras: Fuji X-T1, X Pro-1 and X-M1. All three share the same sensor so their output is exactly the same. When I bought the X-M1 for my wife I bought the twin lens kit. This way the tele zoom lens comes for free.

How does it perform? Just have a look at the detail from the image above. That’s not too bad. Honestly I think this is pretty impressive for such a cheap lens. Of course you can’t isolate a subject from its background with such a slow lens but I bought it it shoot landscapes and there I stop down the lens most of the time anyway.

Those shots were taken with the lens on its longest setting. Usually this is the weakest point in tele zooms. I stopped the lens down to f9 or f10 to provide enough depth of field for both animals and also to increase sharpness. As a result the background is clearly recognizable. When I shoot with fast lenses I tend to blur the background much more than I did in these shots but I guess I have to rethink my technique. I like the background in these images. It puts the animal in context with its habitat.

Of course there are many occasions where you want to blur the foreground or background as much as possible, i.e. in a zoo you want to hide fences and gates or other man made things to give the impression that the animal doesn’t sit in a cage. I tried out the Fuji XC 4.5/6.7/50-230 OIS in a zoo a couple of weeks ago. While I liked the experience to walk along with a small camera and small lens I will never do it again. It is hopeless. This is not a zoo lens but this is a perfect travel and landscape lens. If you don’t want to isolate your subject from the background this thing is as good as the much more expensive and much bigger and heavier Fuji XF 3.5-4.8/55-200 OIS. 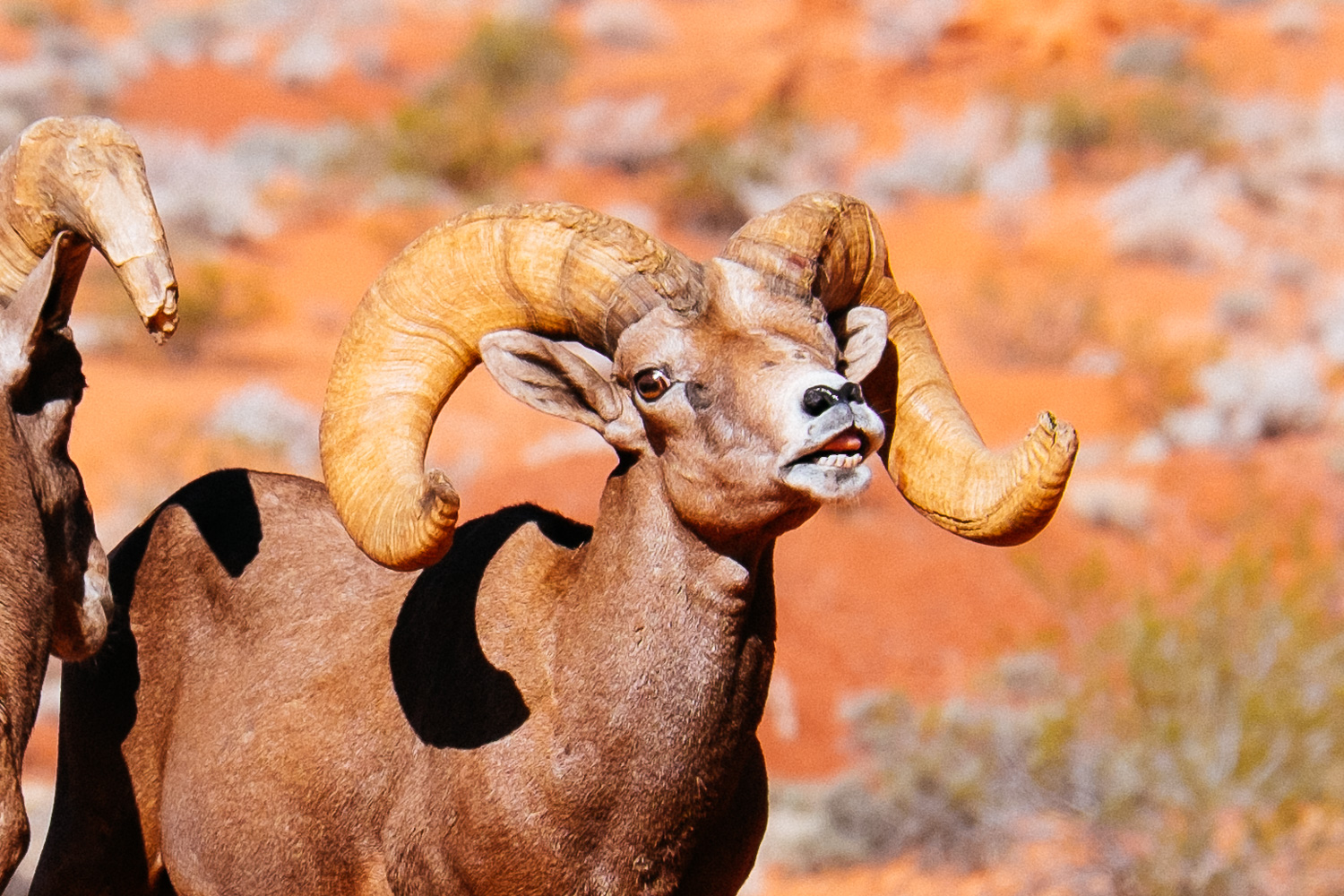 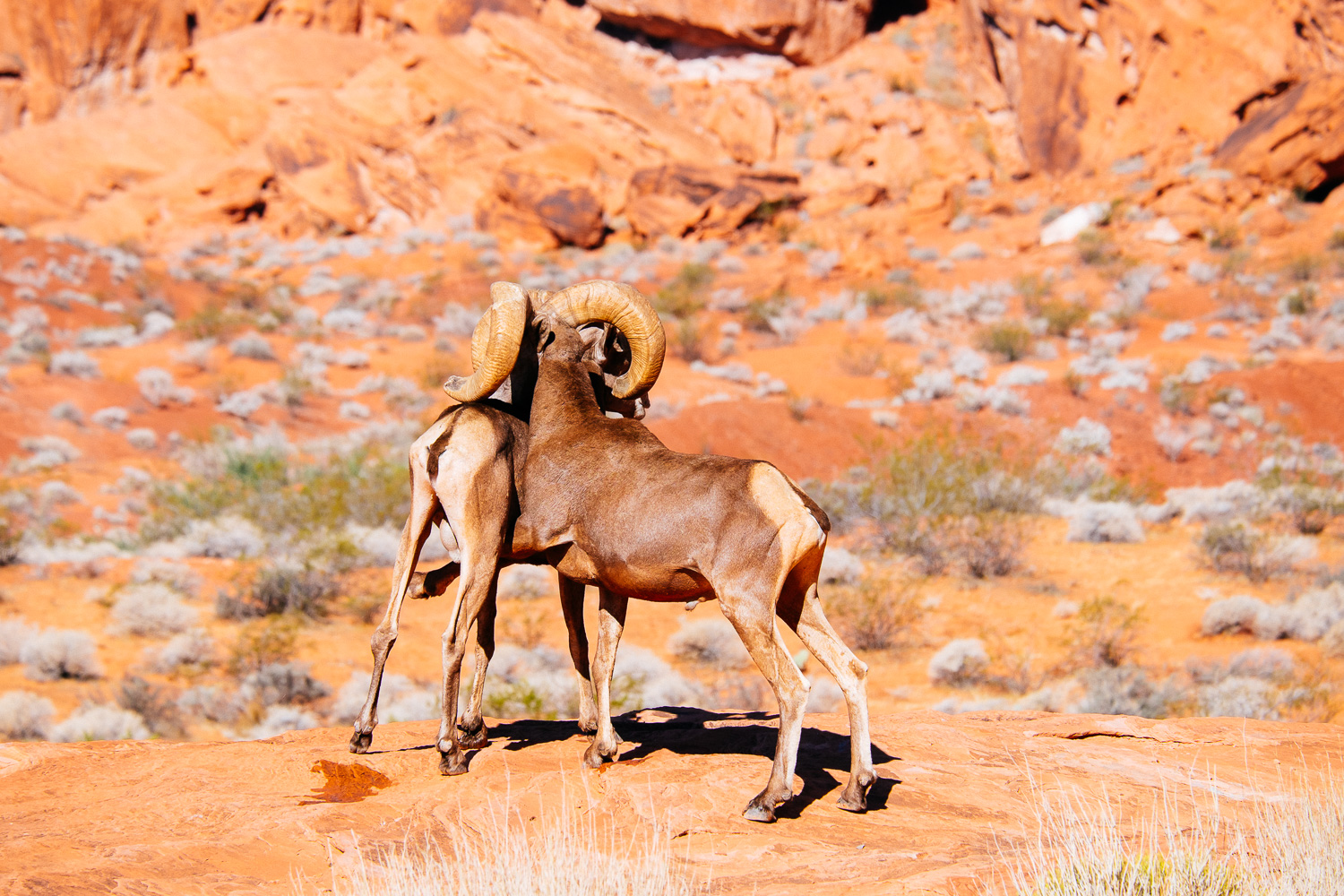 Above is a wide open example. The two stand out from the slightly blurred background. This is one of the few shots I took with the lens slightly zoomed out to show more of the beautiful landscape and to give the animals some room in the frame. I think most wildlife photographers try to get the animal as big in the frame as possible because most of the time it is very hard to get close enough to produce good results. But I found out that my favorite wildlife shots are the ones where the main subject, the wild animal, covers only a small part of the frame. Images that show the animal in context with its environment.

The image above was my favorite shot. I really was lucky that I thought about zooming out.

There was no real fight. The two bulls went separate ways after they evaluated each other. They were able to find out who was the stronger bull without the need of a fight. One of them urinated so that the other one was able to catch his smell. Maybe this was good enough to decide who would be the stronger one in a fight. I don’t know but if that’s the case it think it is a very effective method.

If you are there and you are not lucky enough to see big horn sheep in the wild just go inside the tourist information. There is a little museum where you can take a picture of the stuffed out cousin but you must leave your gun in the car. 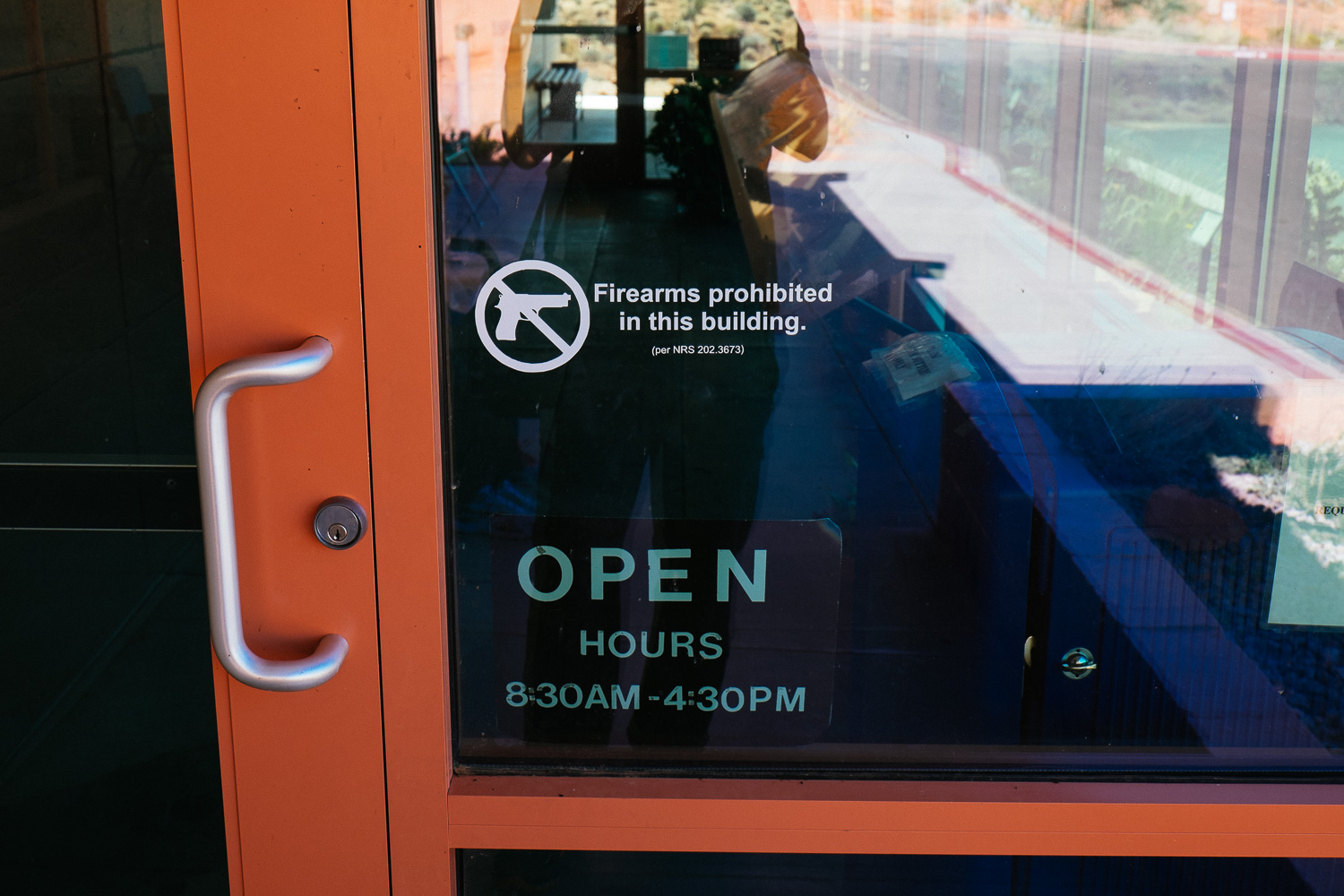 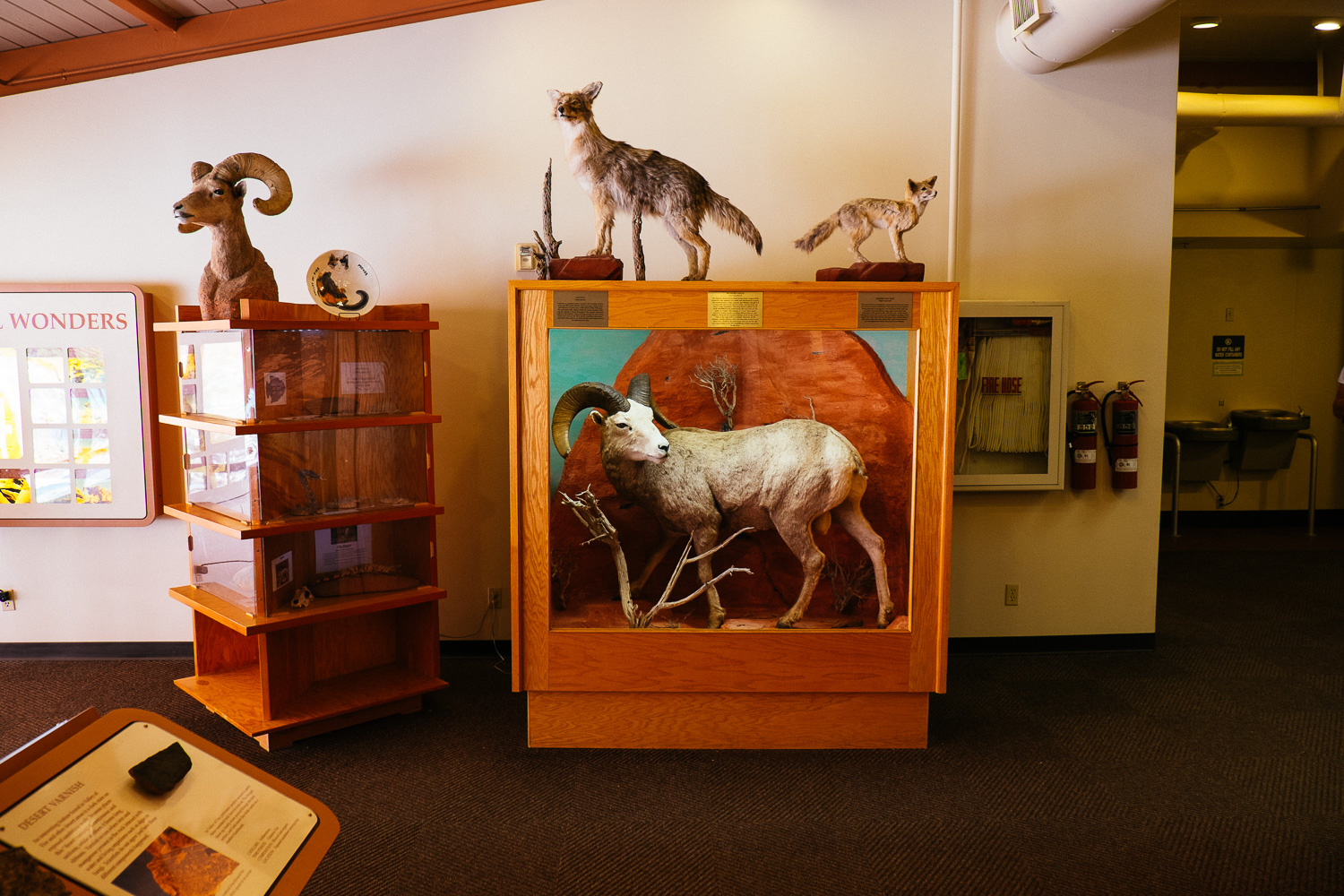