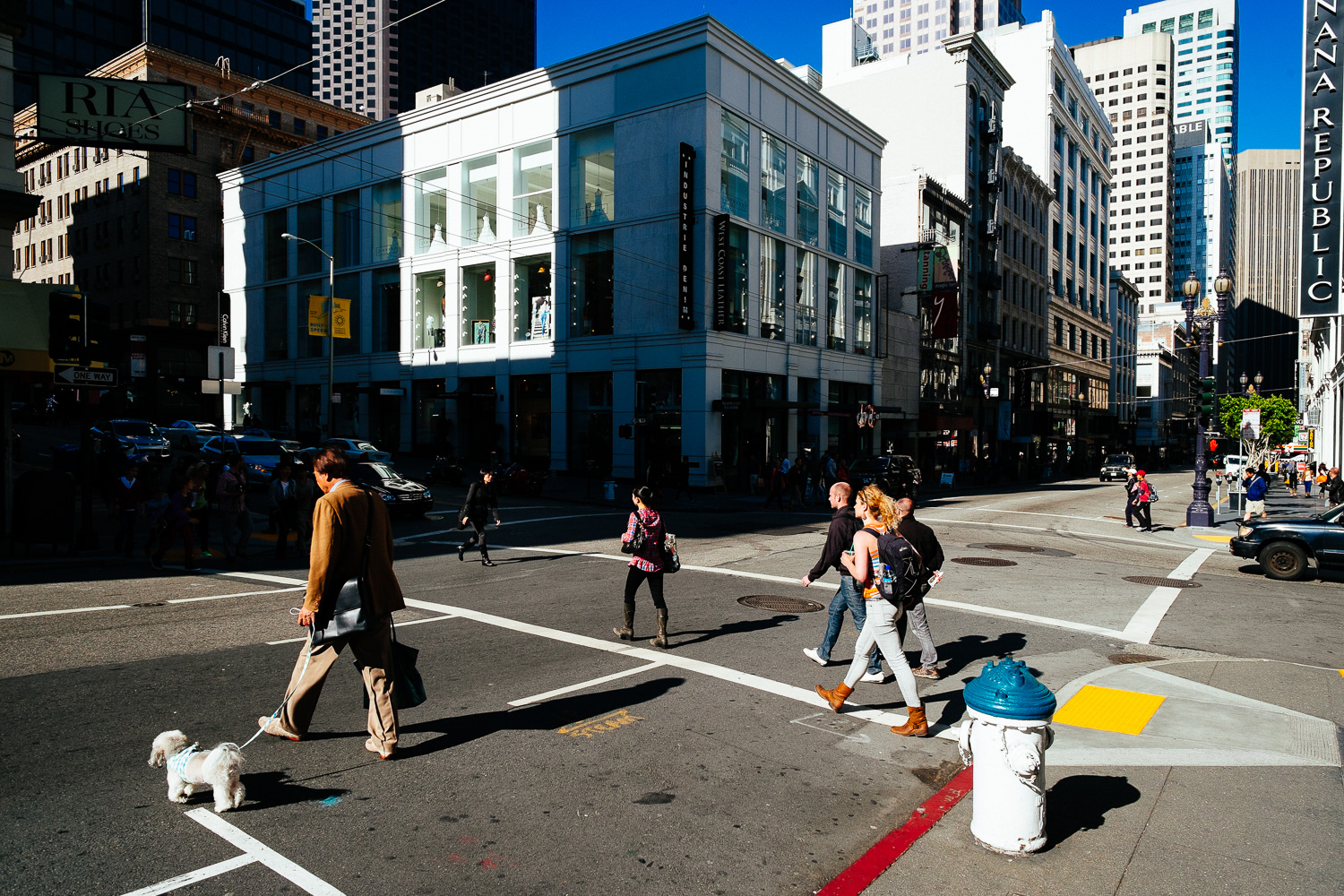 Our second time in San Francisco but this time we were traveling with a car instead of a big RV. That’s why we decided to stay in the center of the city in the wonderful Grand Hyatt San Francisco.

A fantastic place that comes only second to The Horizon Hotel in Palm Springs. When we arrived we dropped our bags and went for a walk to and through China Town. I exchanged my DSLRs outfit for my Fuji XP1 and the 14mm lens. So it’s just one camera and one lens instead of a heavy back bag. In a city a don’t need more than that. The light was beautiful and the air was fresh. 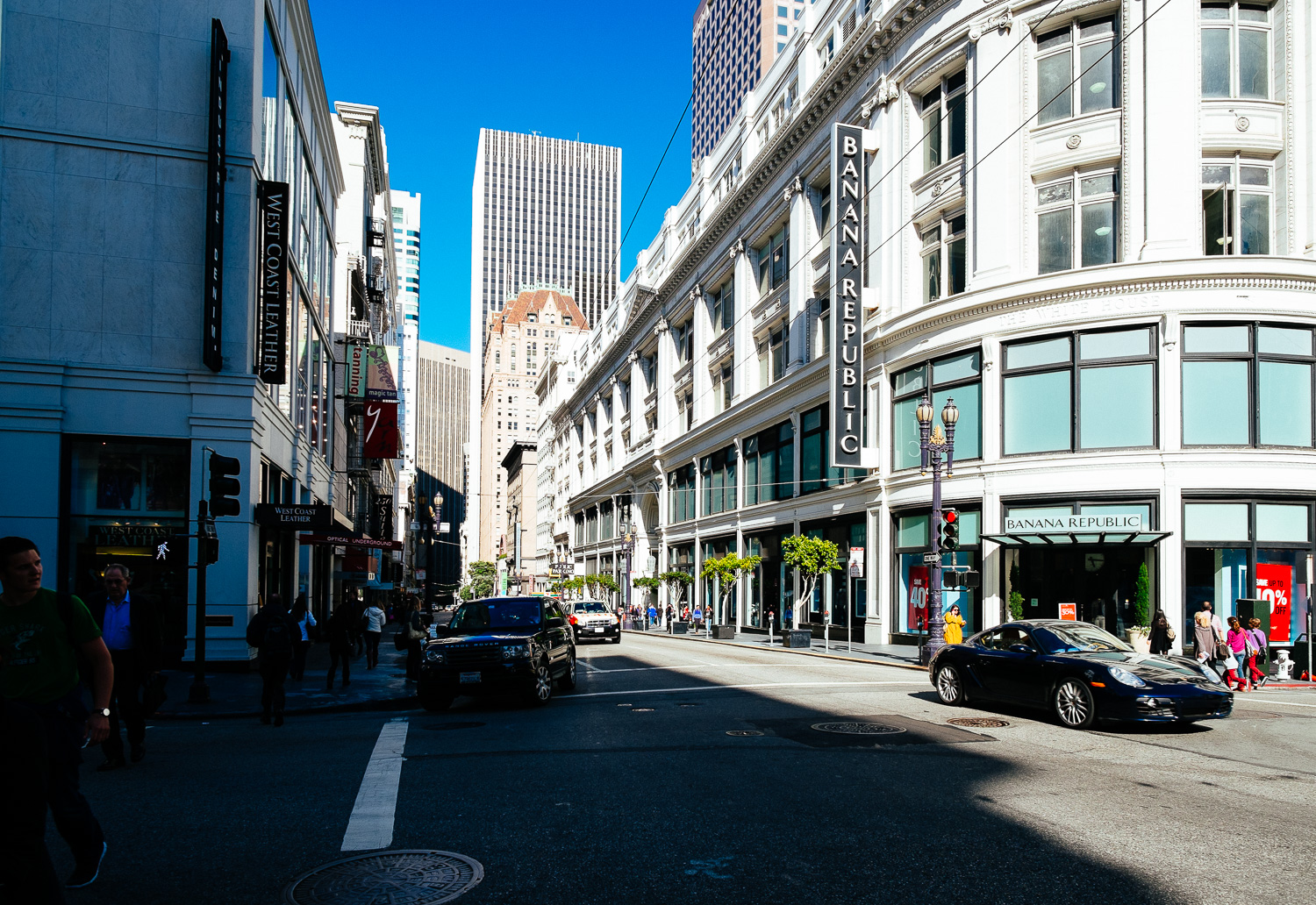 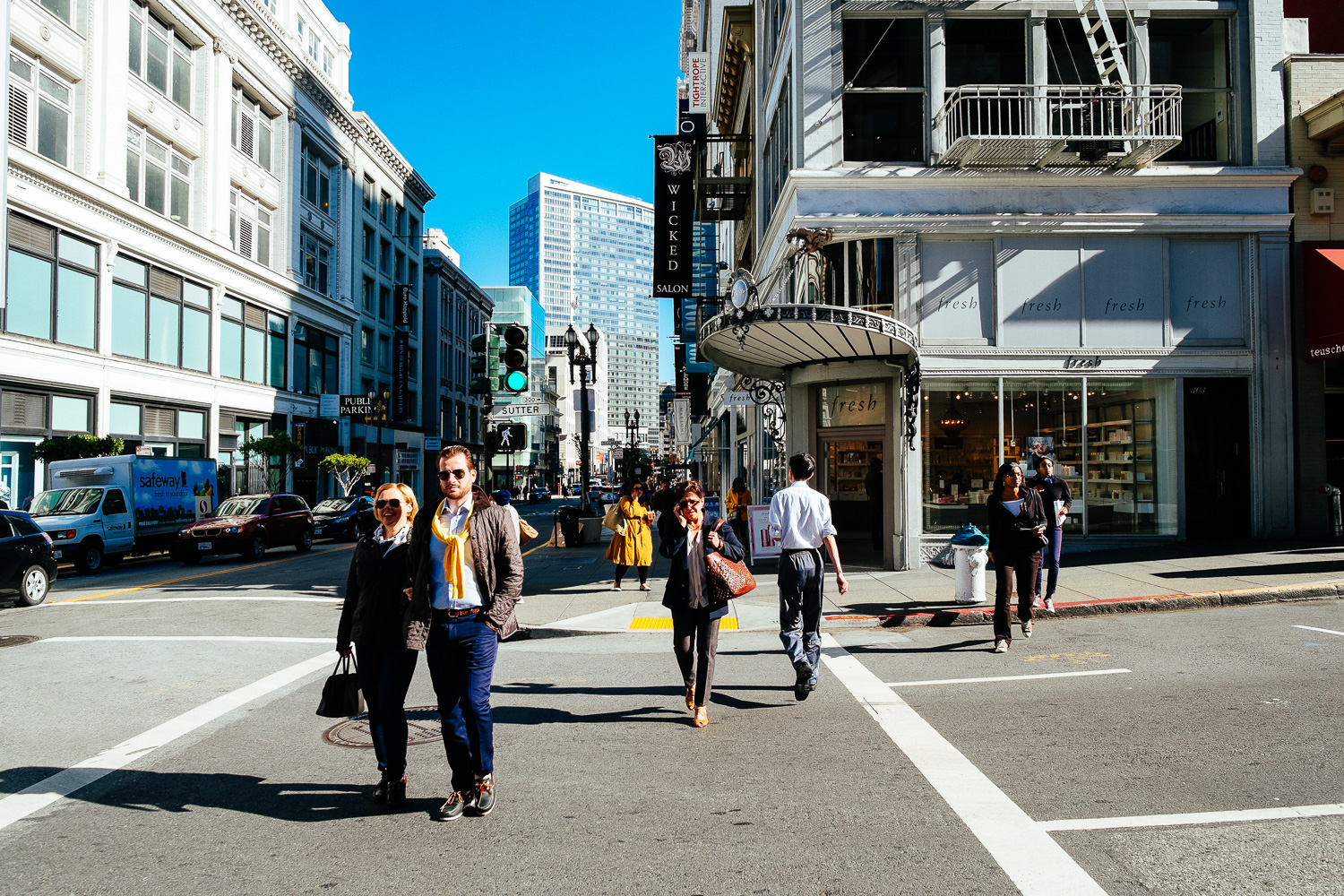 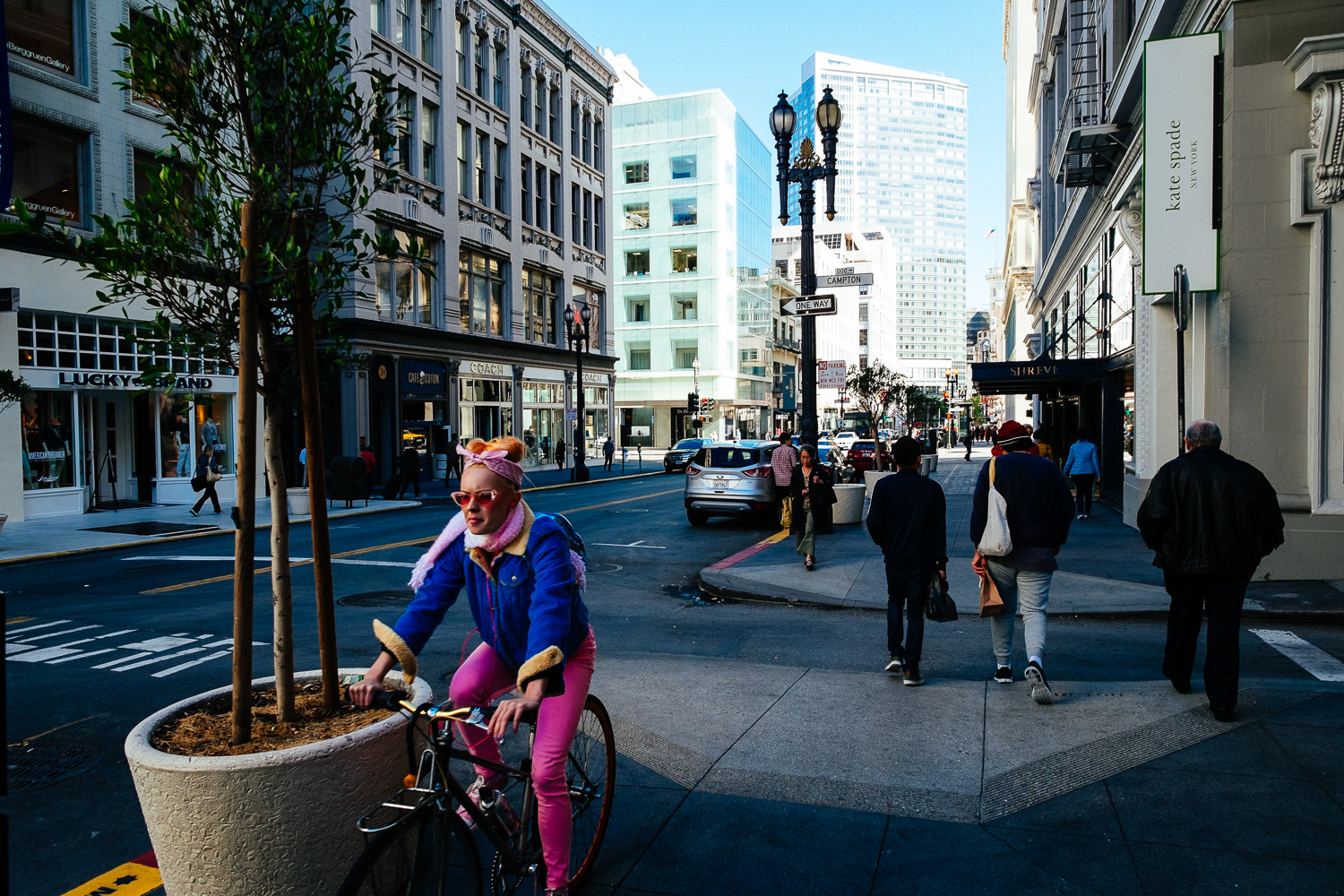 I love the XF14 lens. It almost has become my only lens when in Asia. In tight spaces there is nothing better than a true wide angle lens. In the US it was different. When I started this trip in Las Vegas I switched back to the XF18 on the first day because I was unable to handle the wide view of the 14mm lens. The roads are wide and there is no much space that it is hard to fill the frame. But I adjusted and within the first week I went back to the XF14.

At the end my vacation in San Francisco I didn’t have to think which lens to choose for my first walk. 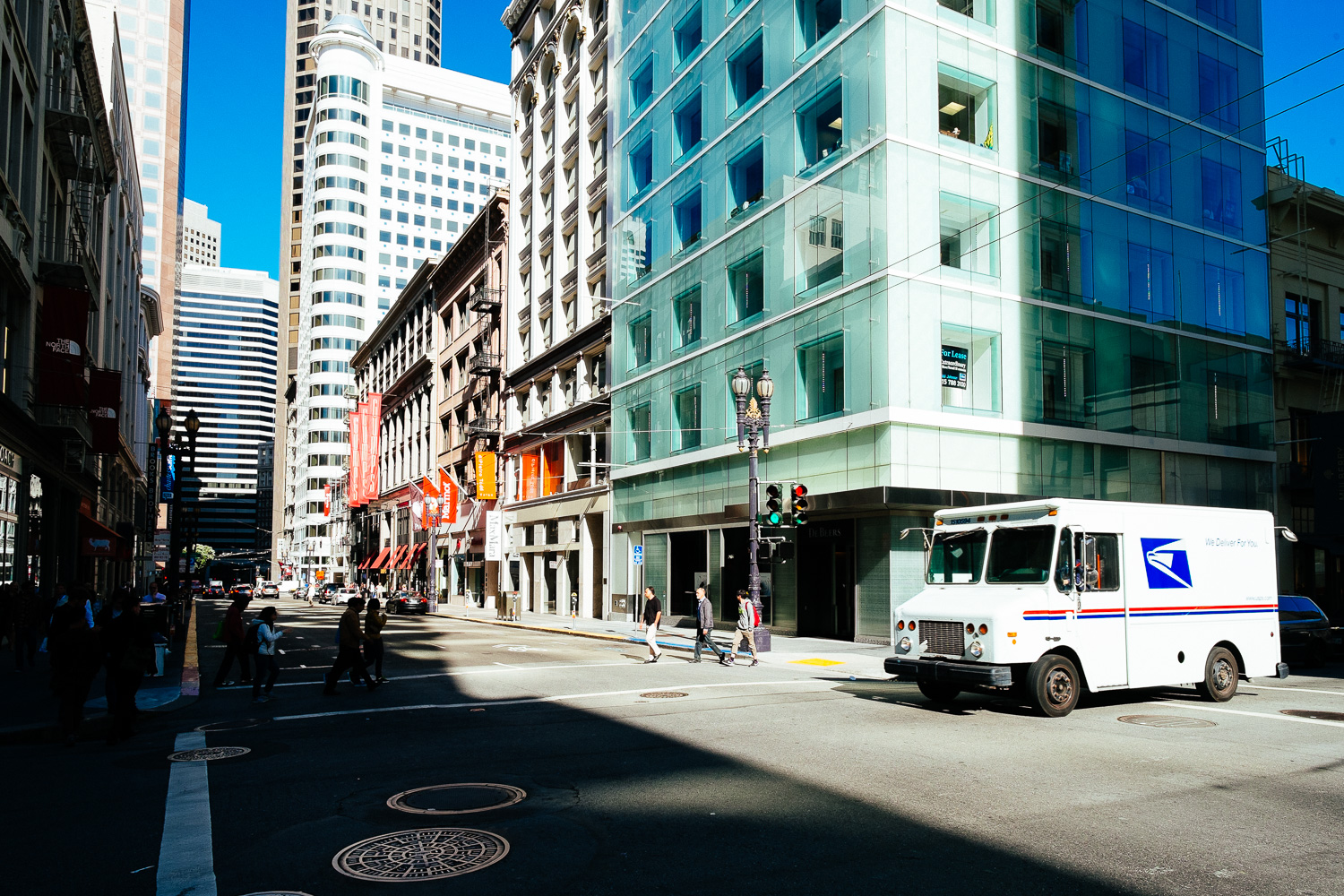 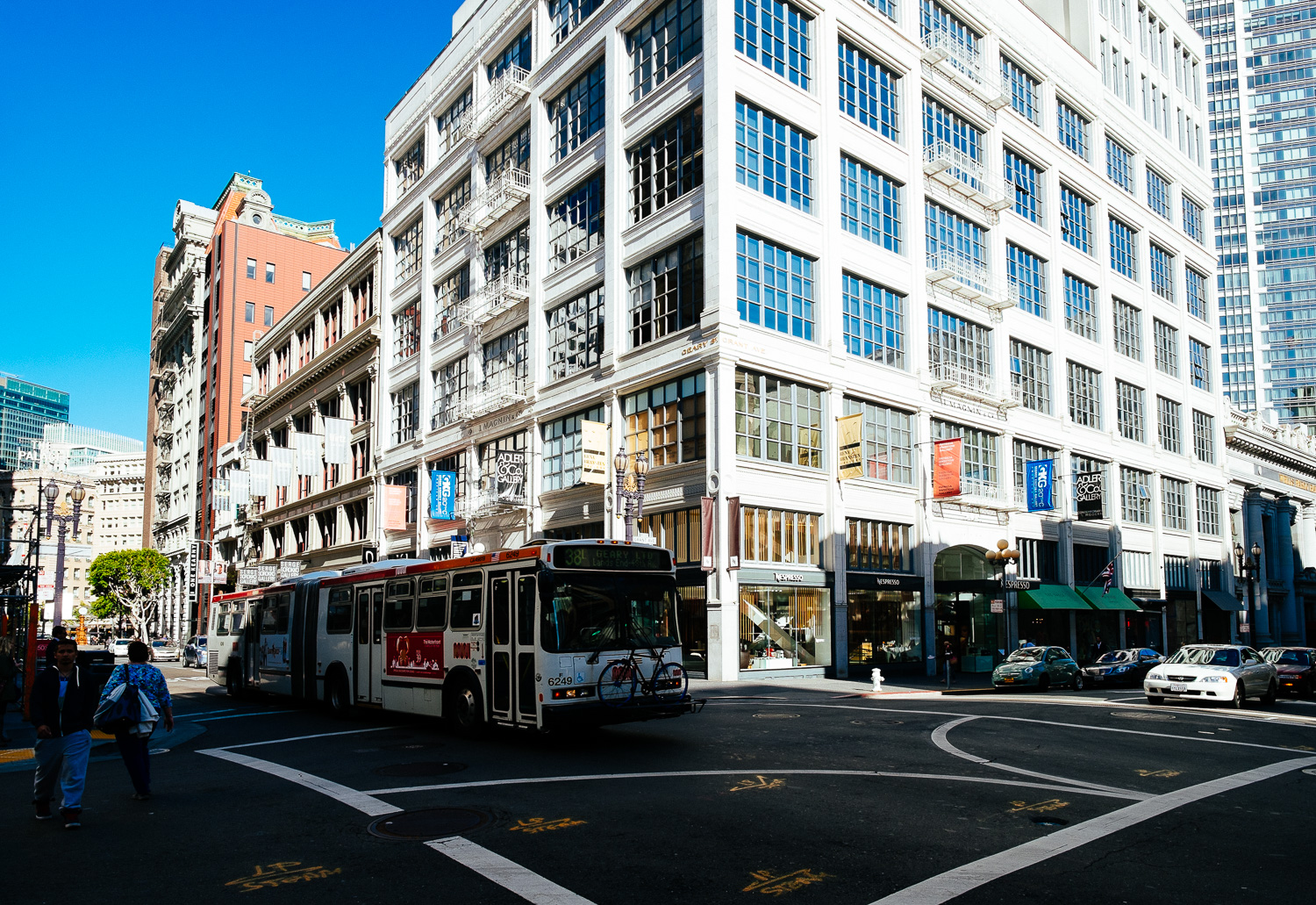 The biggest advantage of the XF14 is that it has no distortion. This is something that separates it from all the other super wide angles and standard zooms I have ever used before. Some of these zooms have massive distortion like the 24-105L from Canon or even the XF18-55 from Fuji. If you shoot JPEG it will be corrected in camera but if you shoot RAW you need to deal with it in your RAW converter. For most Canon lenses it is not a big deal since there are Lightroom profiles but there are no profiles for Fuji lenses so far.

So it is a very good thing to have a lens that has no distortion like the 14mm lens. There is another big advantage when shooting such a wide lens. You do not have to tilt the lens upward so far to get your subject (i.e. a building) into the frame. That makes a big difference. If you use the 18-55 zoom there is a big chance that you can not get a large and high subject into the frame when you can not increase the distance because there are other buildings. The only way is to shoot with the camera tilted up. That results into buildings that look if they are falling back. Very annoying.

Of course sometimes you need to tilt even with the 14mm lens and then you need to deal with it in Lightroom too. That’s what I did in some if those shots. 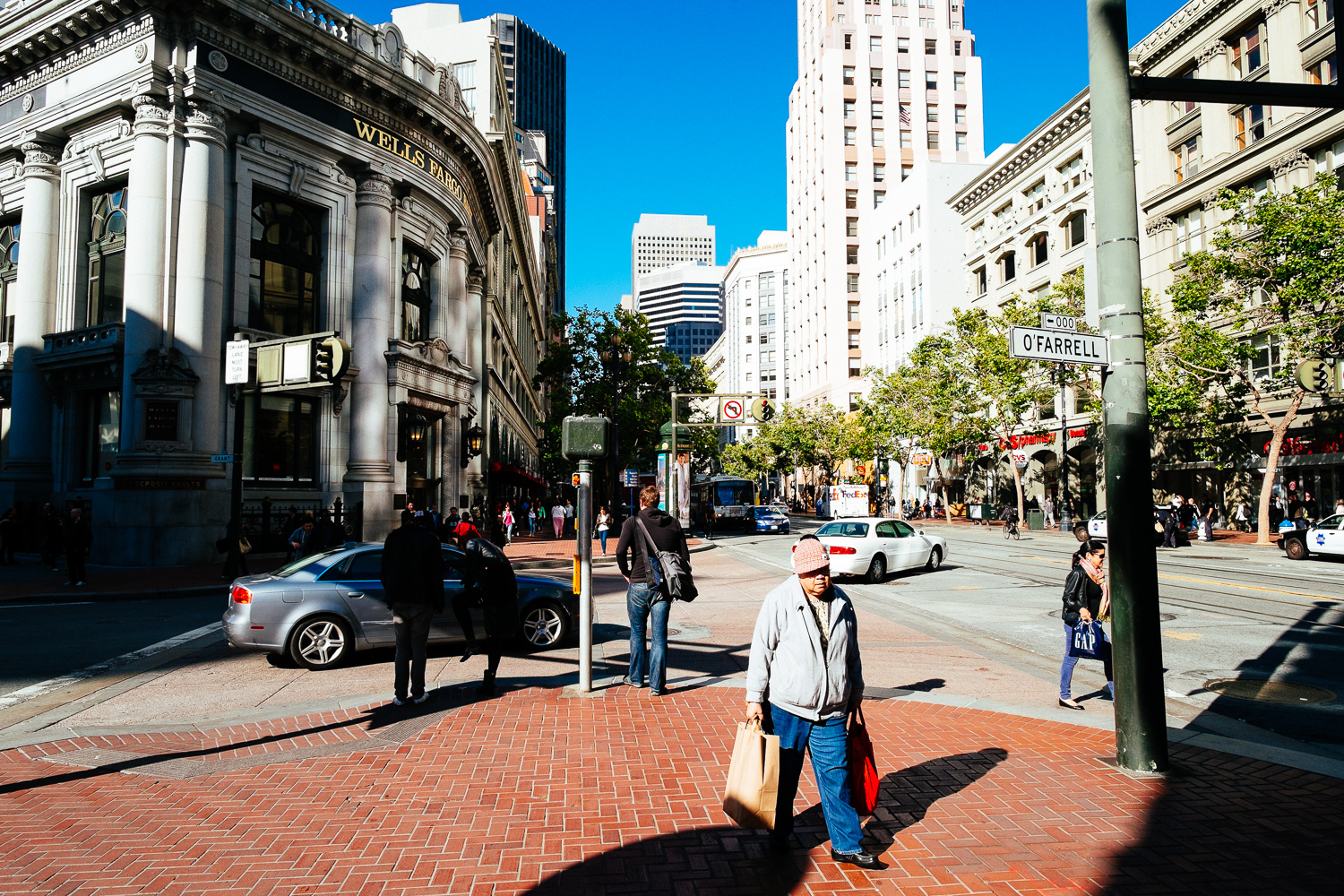 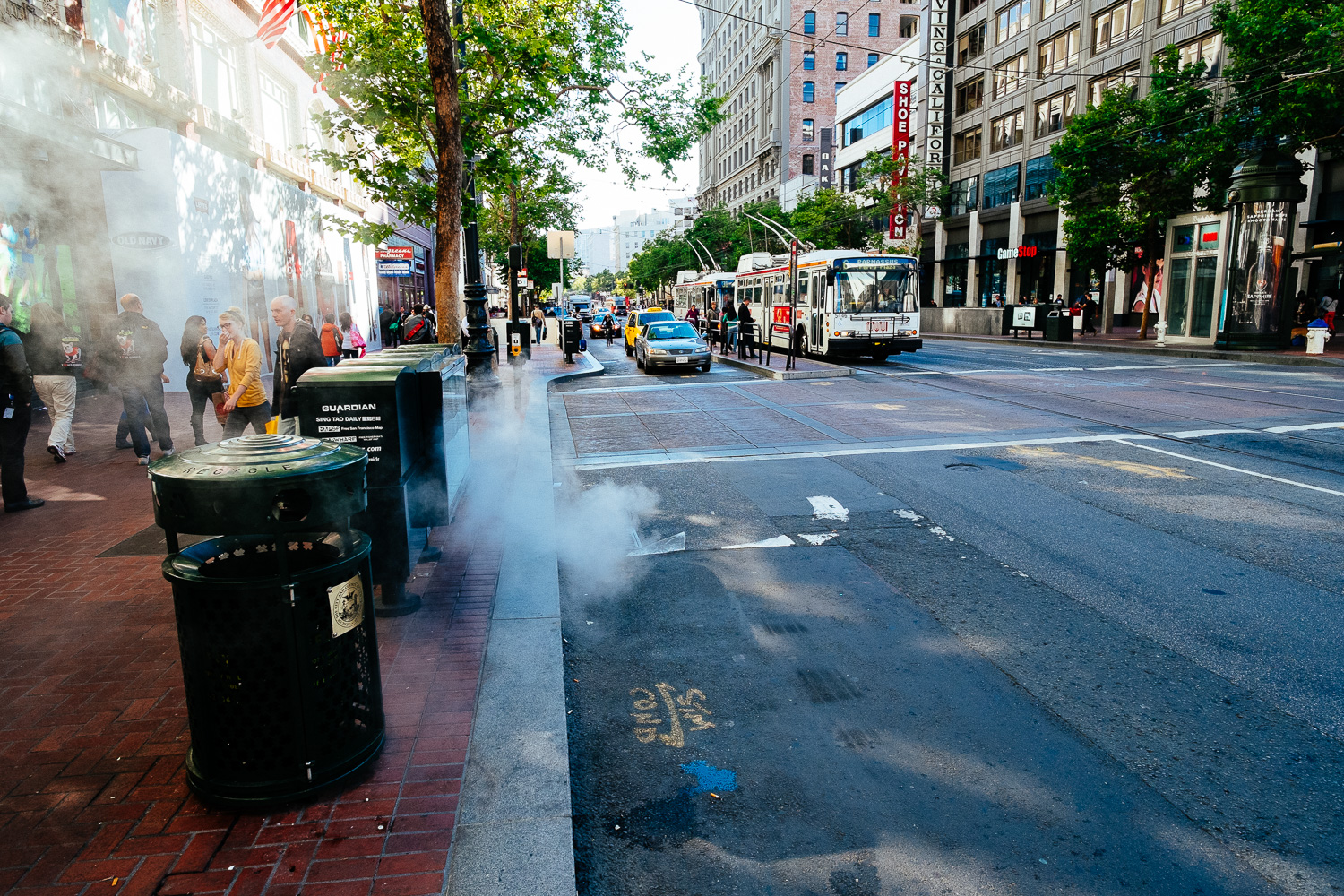 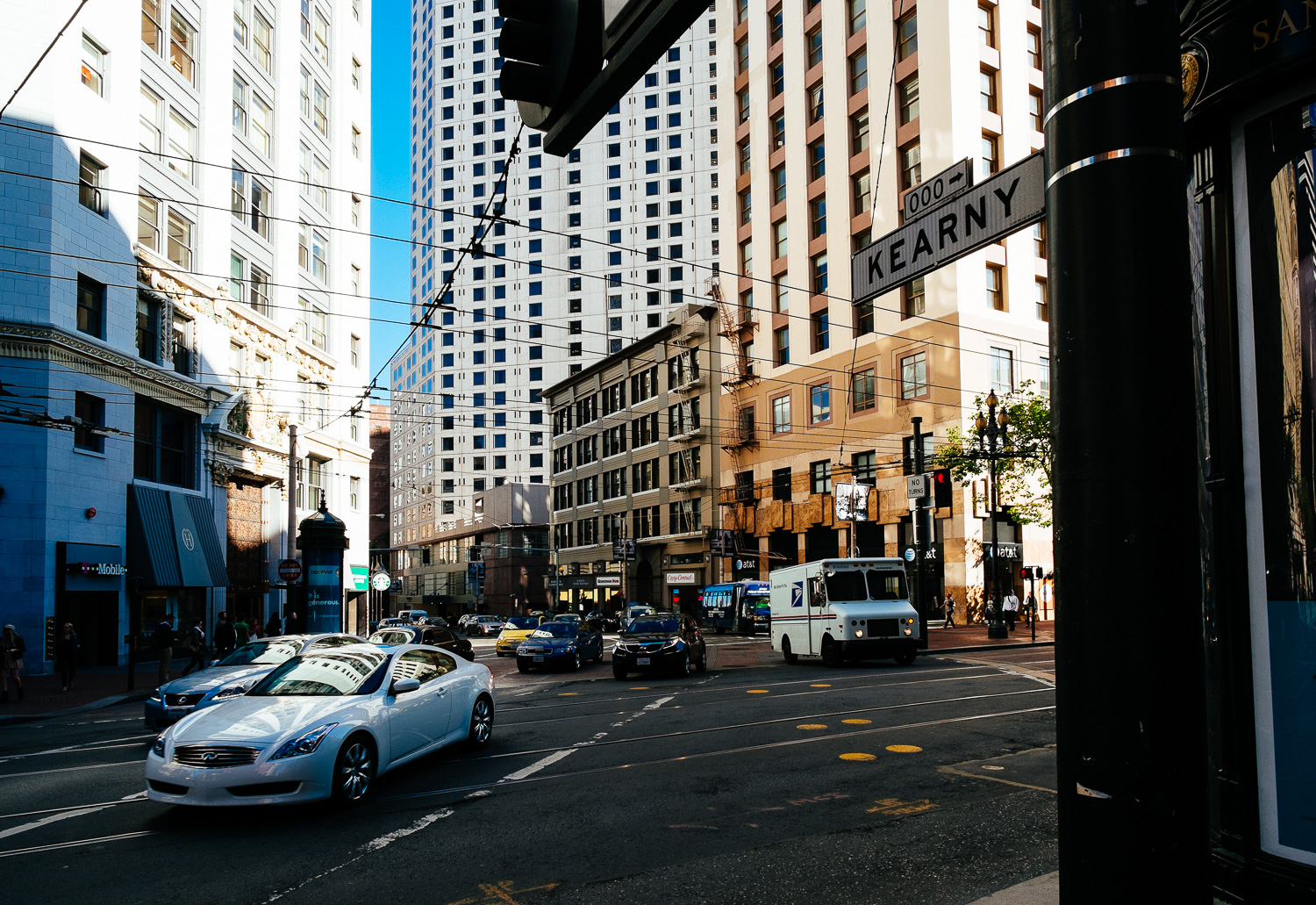 There is another thing you need to deal with on a bright day in San Francisco: High contrast. There are deep shadows and there is bright sunlight and it’s reflection in the buildings. Not a big issue with todays digital cameras. Today even APS-C sensors can easily handle the contrast. But for my taste the results are too flat. I used to shoot Velvia slide film a long time ago and I loved it’s bold colors and deep blacks.

Now I use VSCOs Velvia preset which of course is not exactly what you get from Fuji’s most famous slide film but it comes close. Much closer than Fuji’s own in camera Velvia settings when shooting JPEG. In some cases I had to tone down the highlights or lift the shadows but overall the results are much better than the flat RAW output from the camera.

The Fuji in camera JPEGS are most suitable if you are talking pictures during blue hour or during the night where a flat contrast camera helps to deal with the high contrast. 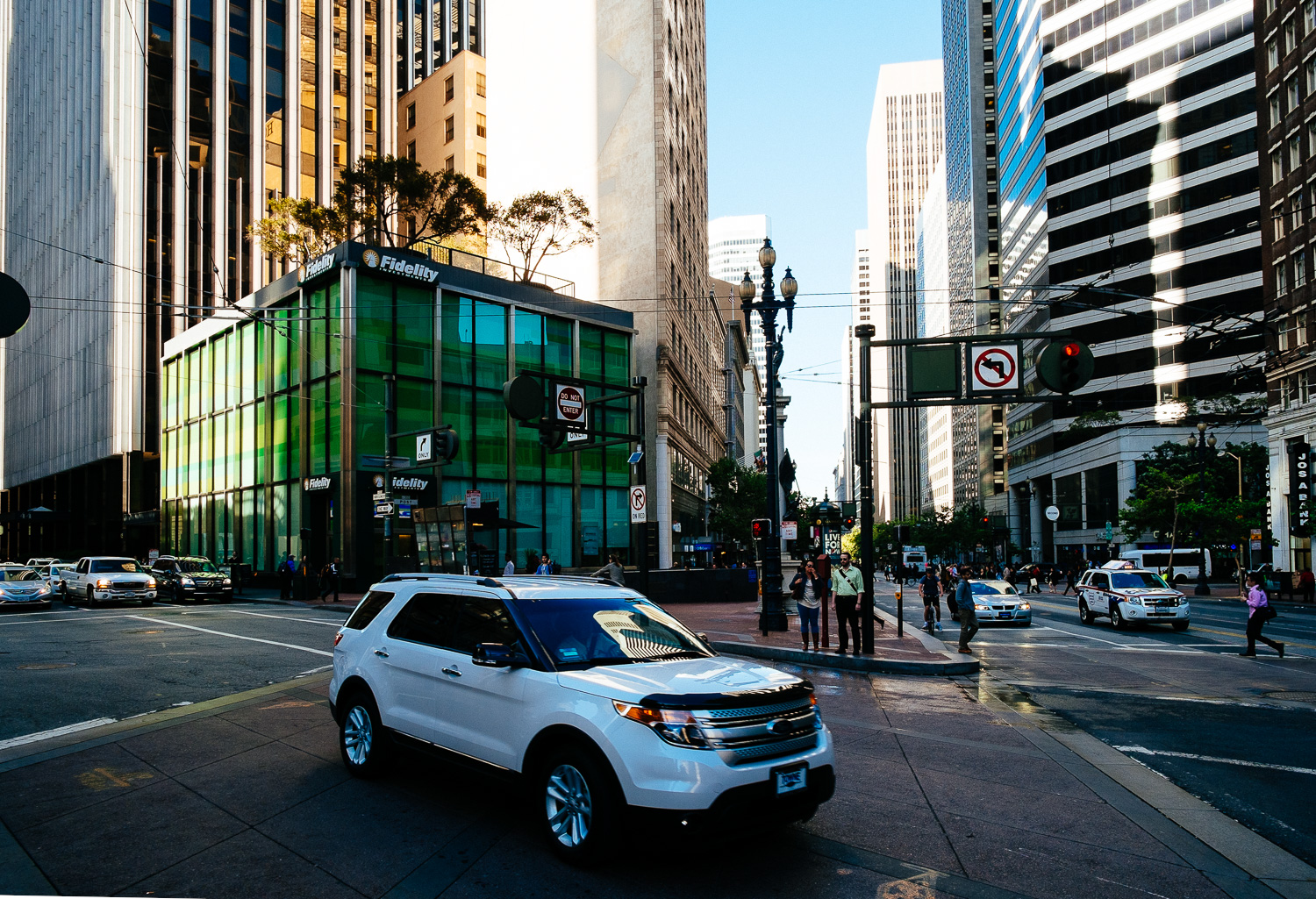 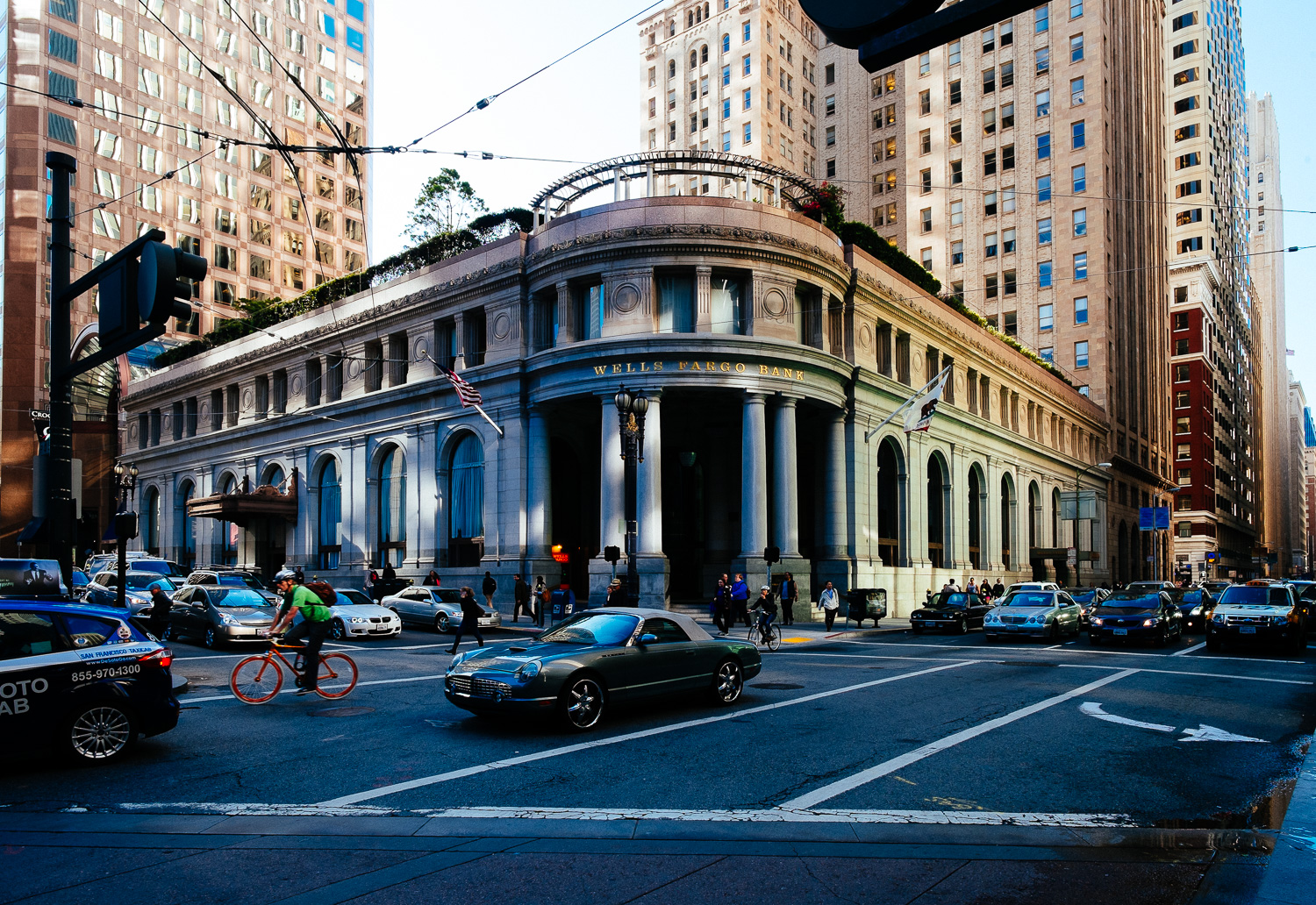 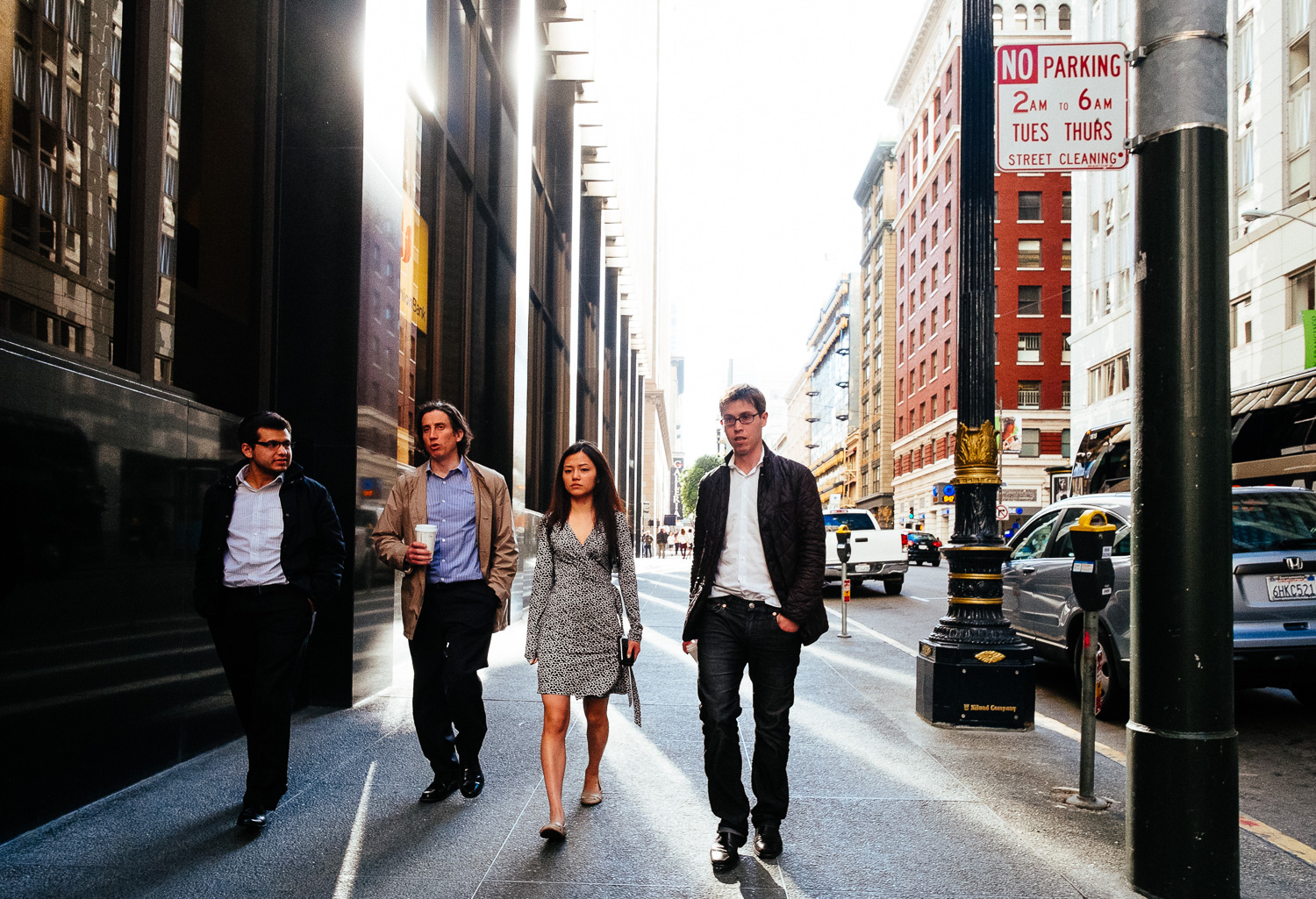 Sometimes what attracts me to an image are the deep shadows or better the contrast in between sunlight and shadow like in the image below. Those are anti-HDR images but I really like them. 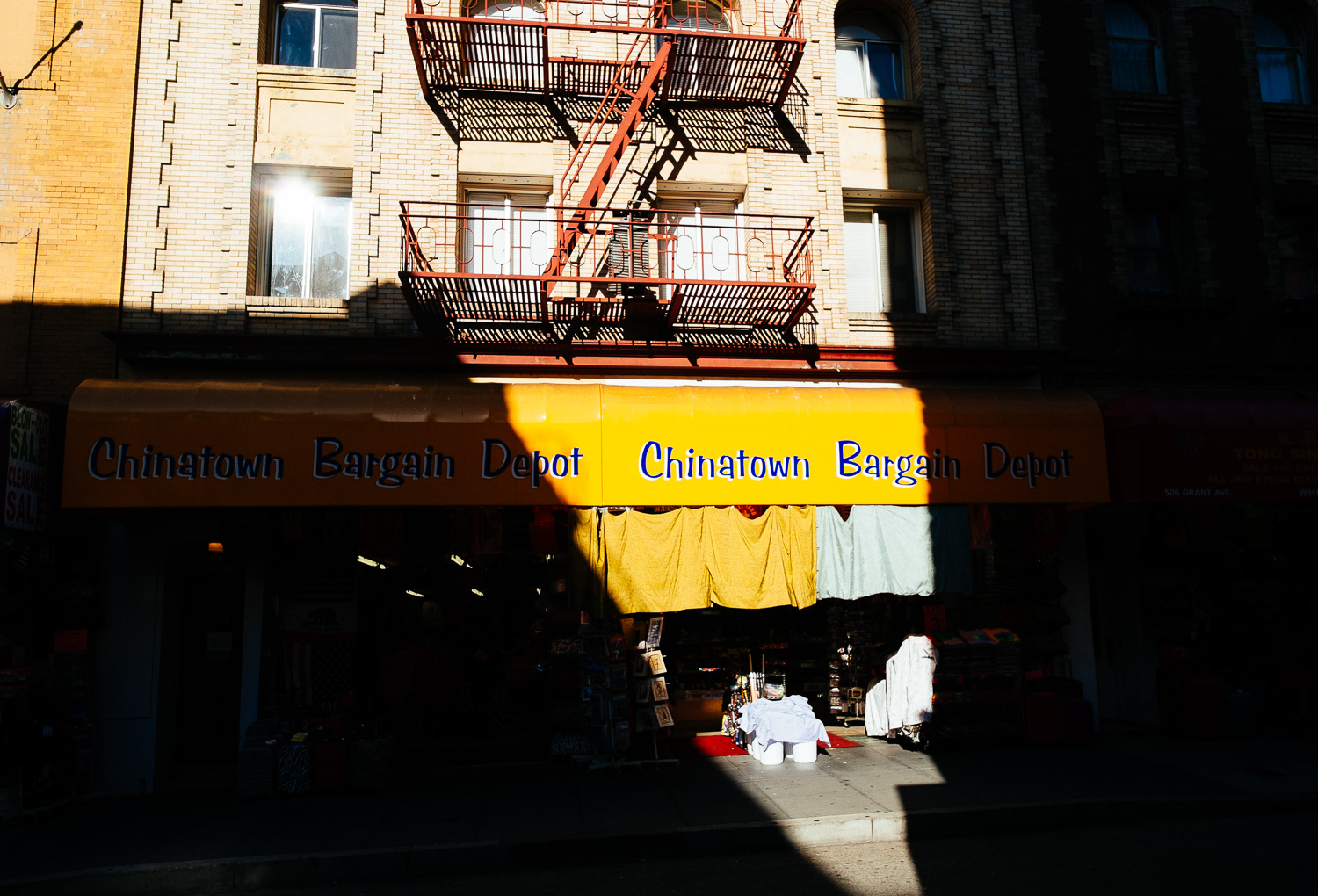 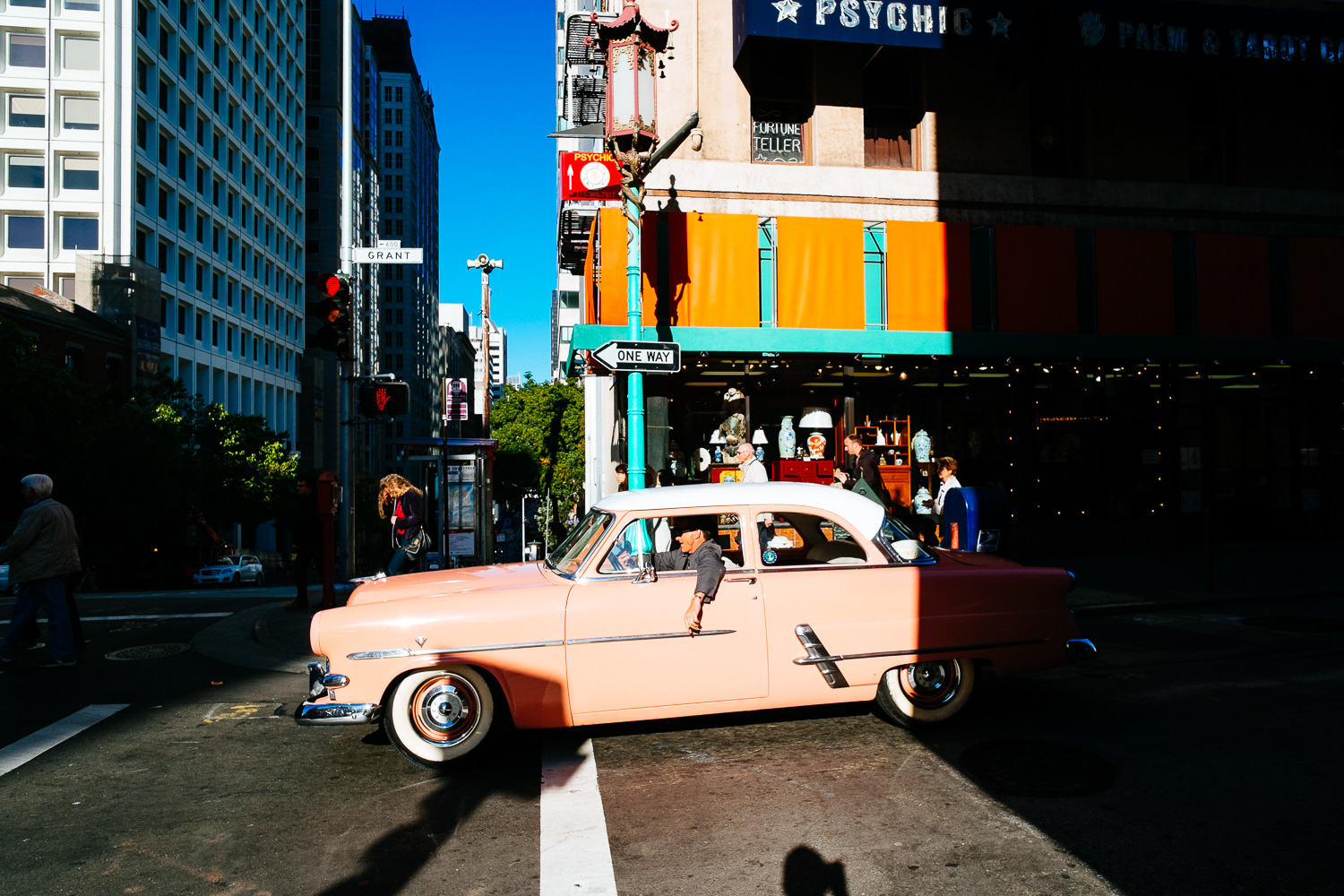 It really pays to be on the right spot at the right time like in the image above. I was standing at the crossroad when this beautiful car appeared. I was lucky enough to capture a shot before he was gone.

What a great first walk through the city. The only problem was that I didn’t bring my fleece jacket and it was rather cool when the sun began to set so we decided to go back to the hotel but not without some shopping in Chinatown. 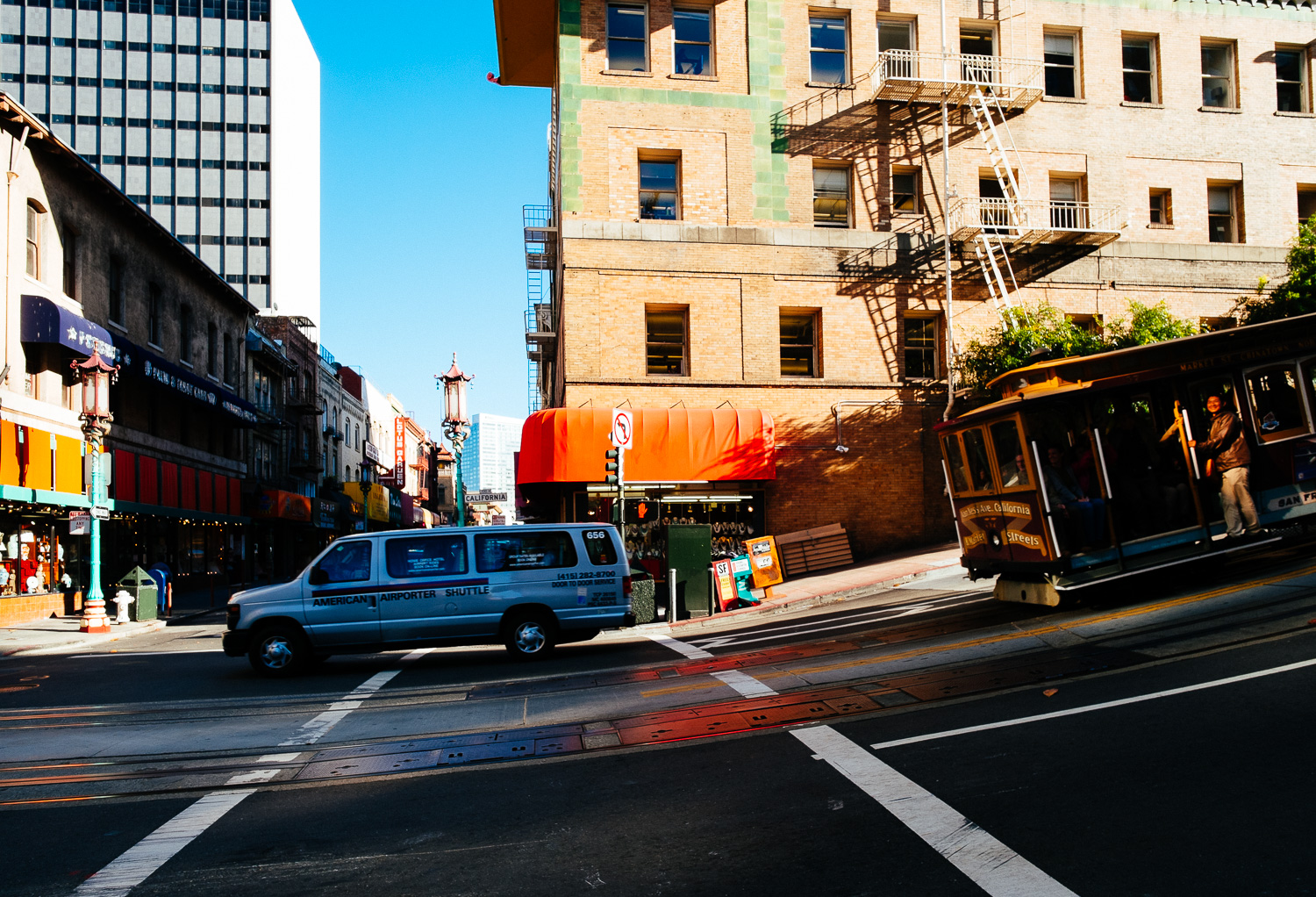 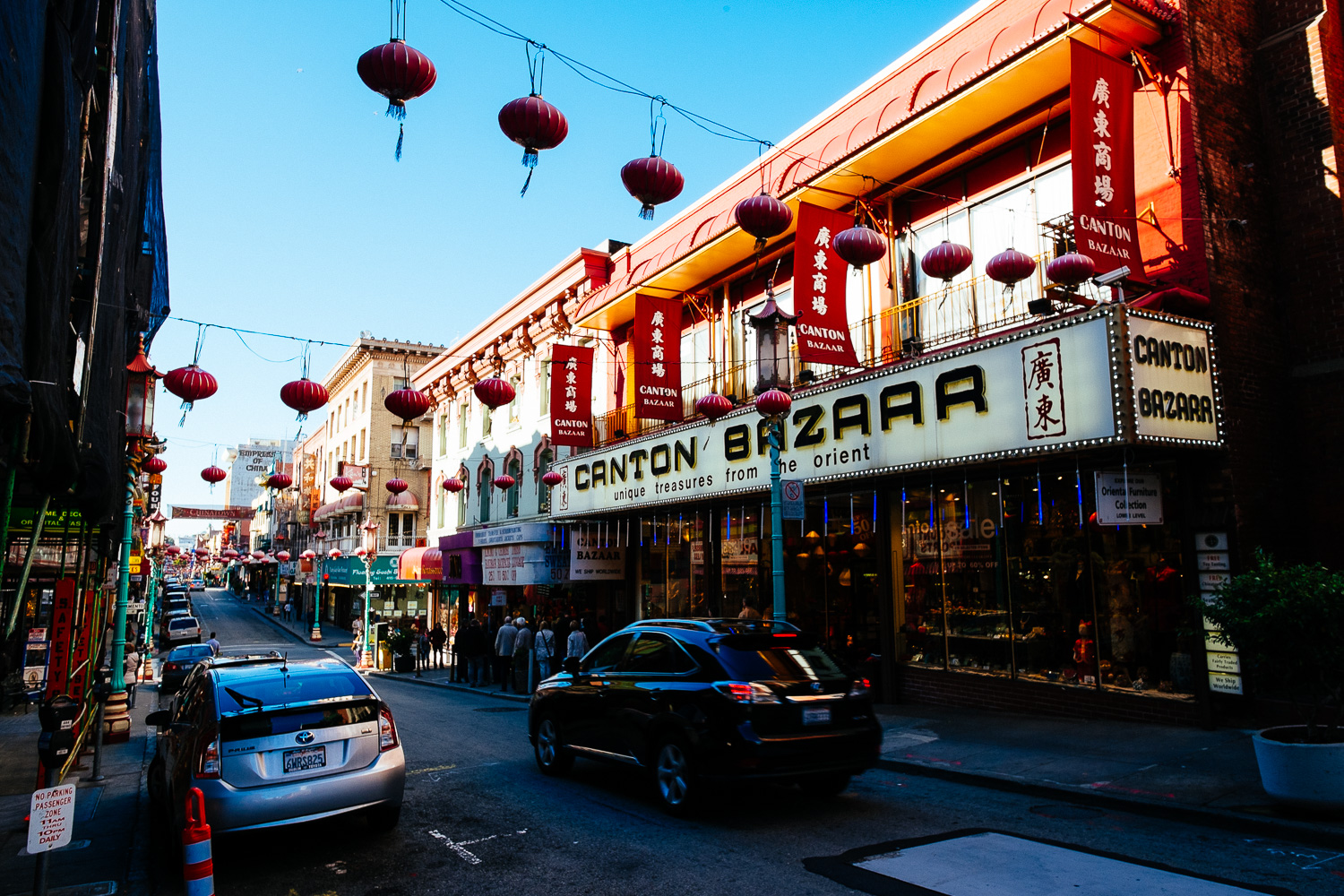 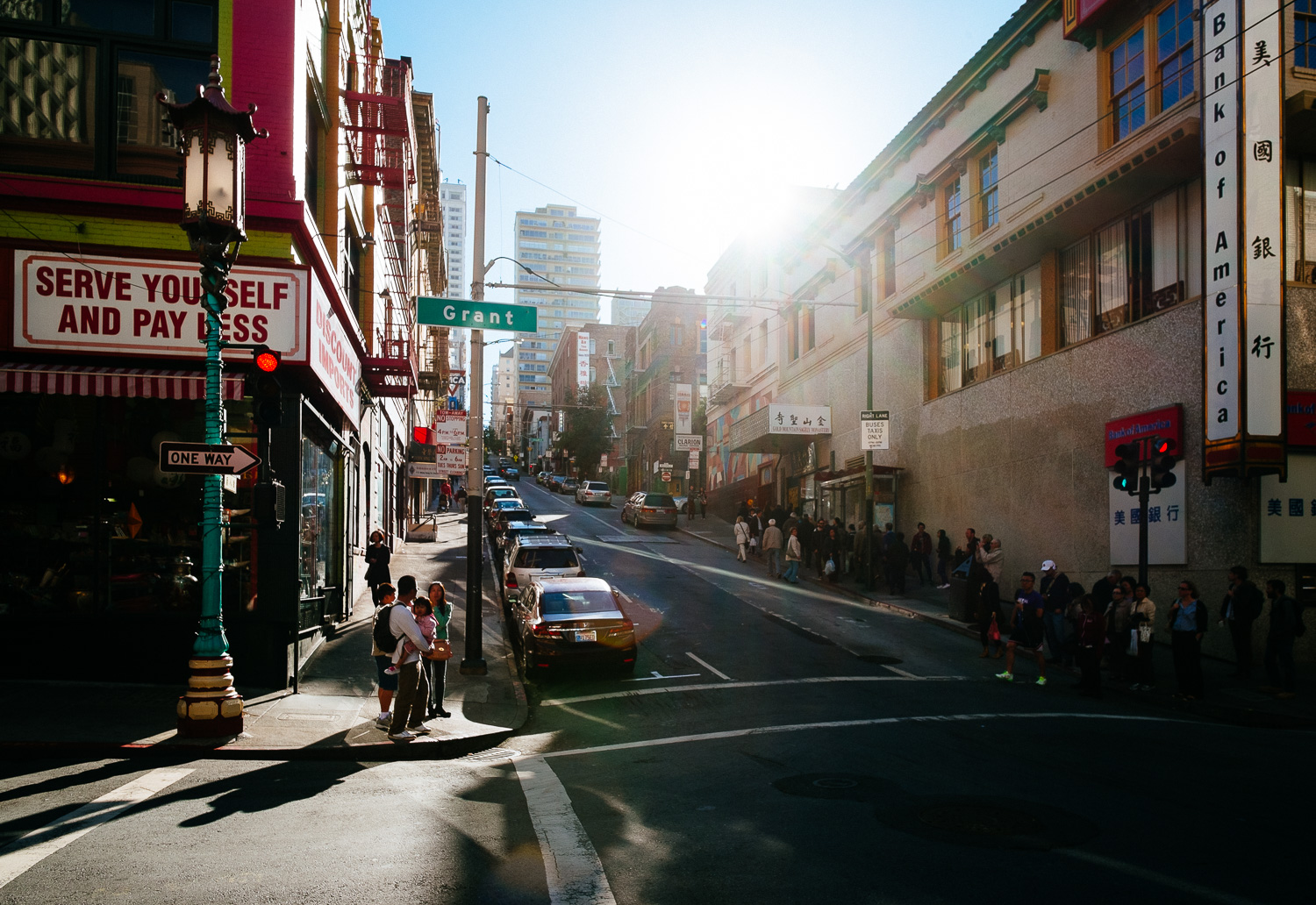 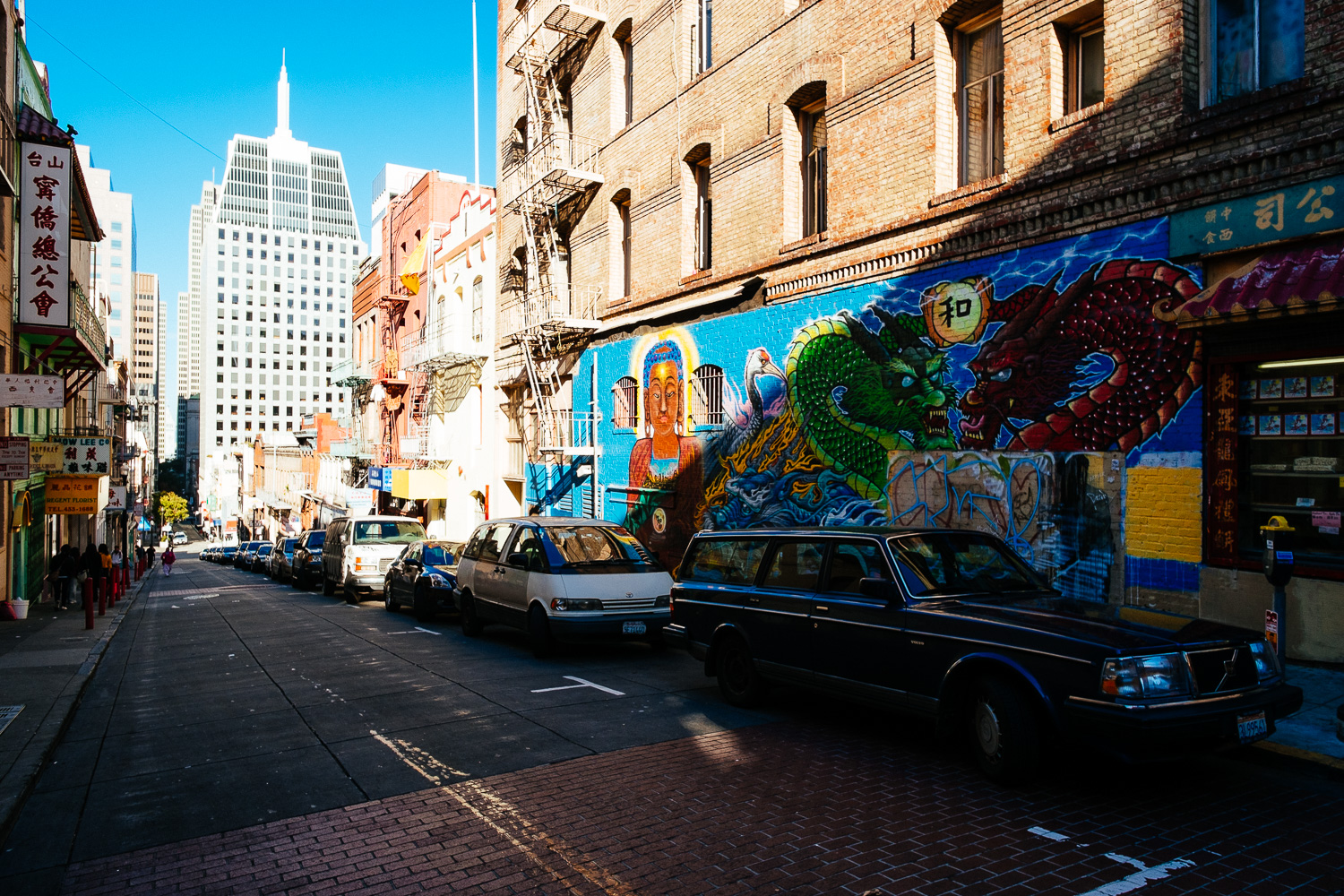 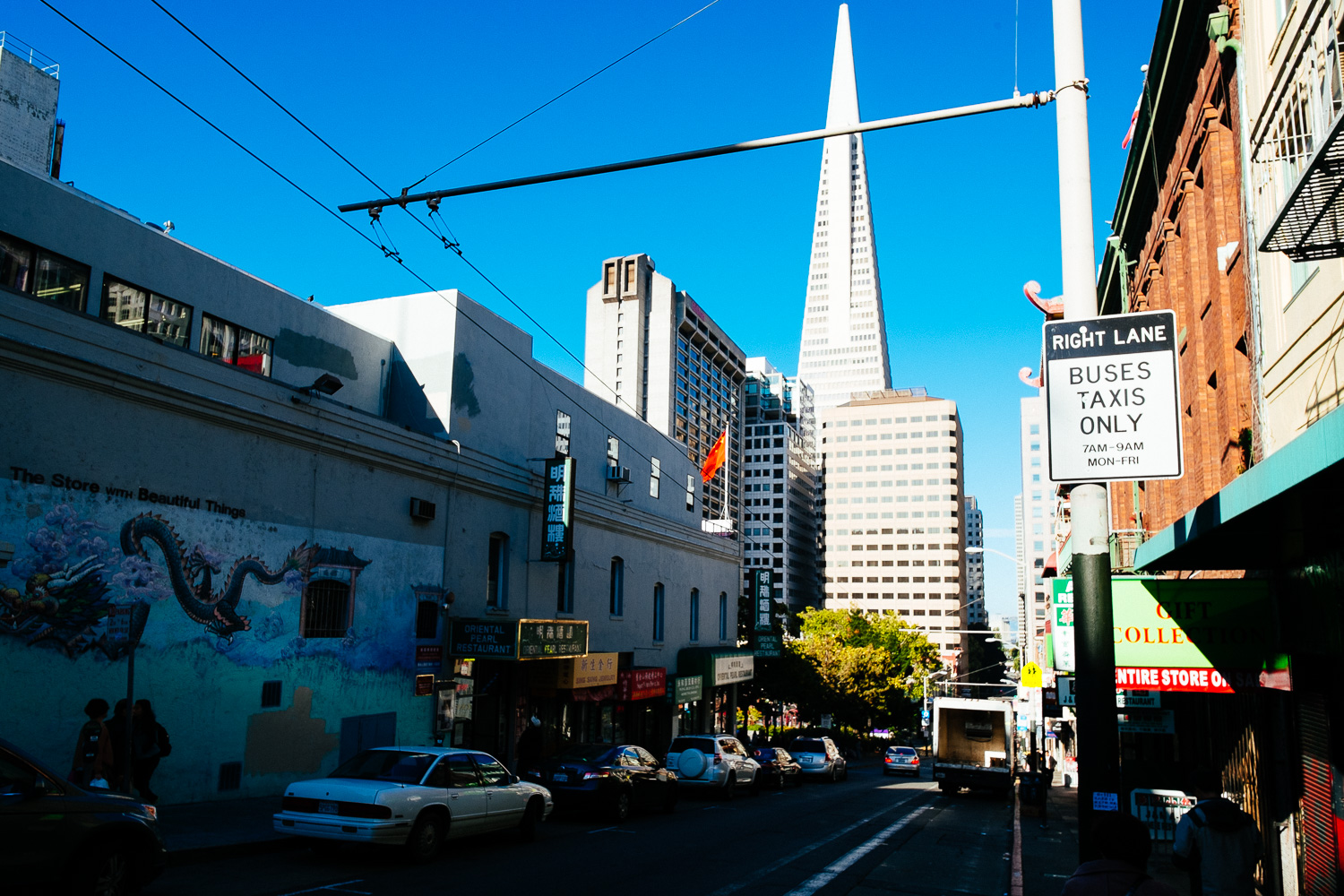 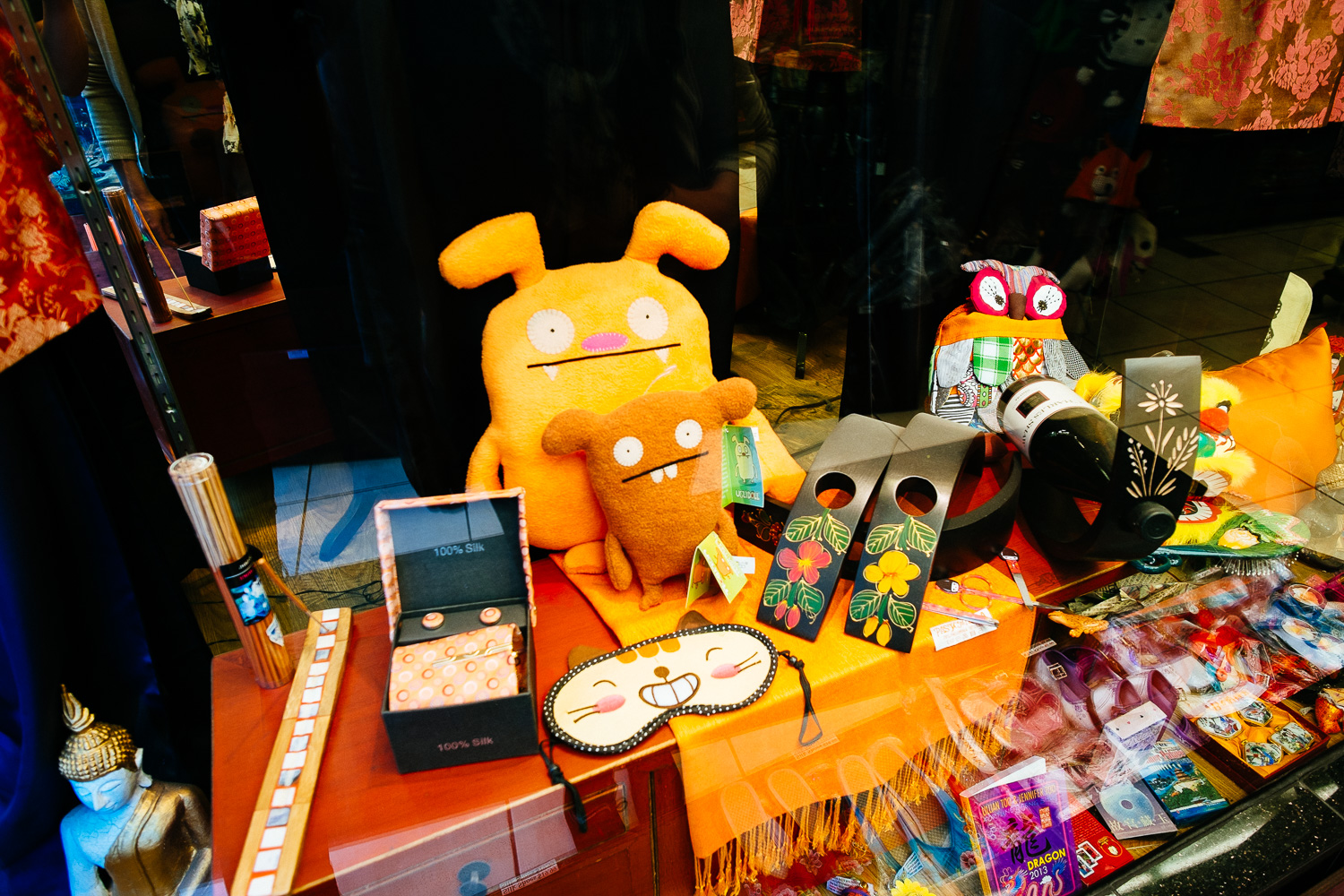 I got this great ugly doll (the small one in the image above). I thought I would include it in some of my pictures in the future and to travel with it to Asia but dropped the idea. I took some shots during the remaining trip but it just didn’t work as I expected. I was very impressed when I saw images of the two large penguins (one of them with a camera around his neck). I think it was a German photographer traveling the world with two big penguin statues. He always had to ask somebody to carry the second one for him. He put them in front of special places and took a picture. The results are really special. Traveling with a small ugly doll is far more convenient but the results are less impressive of course.

I still think it is a lovely doll. 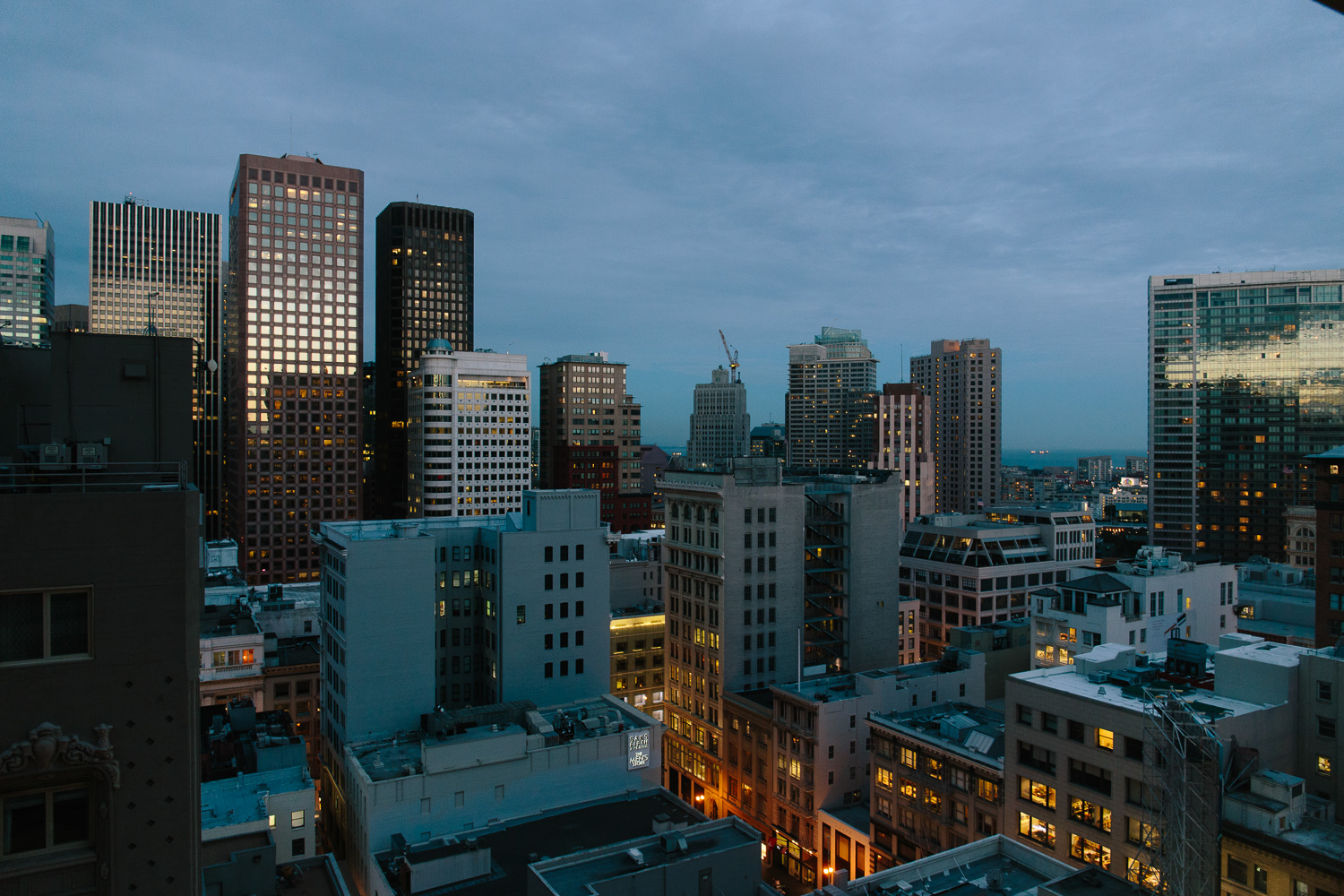 Back in the hotel I switched to the Canon 6D to capture the view from our window. It was amazing. I really loved it. On the image above you can even see the ocean in the upper right corner. So we had the Transamerica Pyramid on the left and the ocean on the right. We did not watch TV the first night. We were busy looking out of our window. 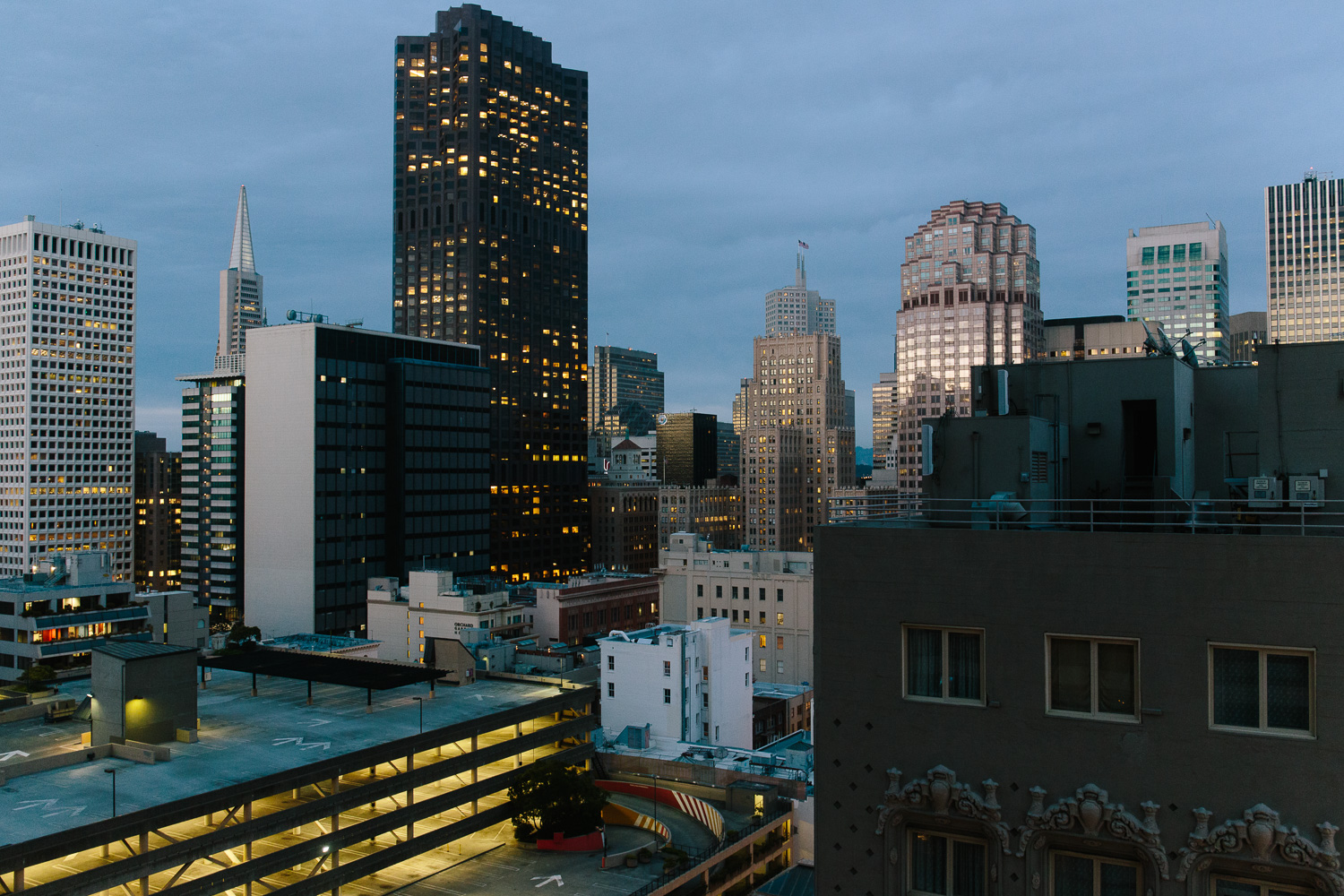 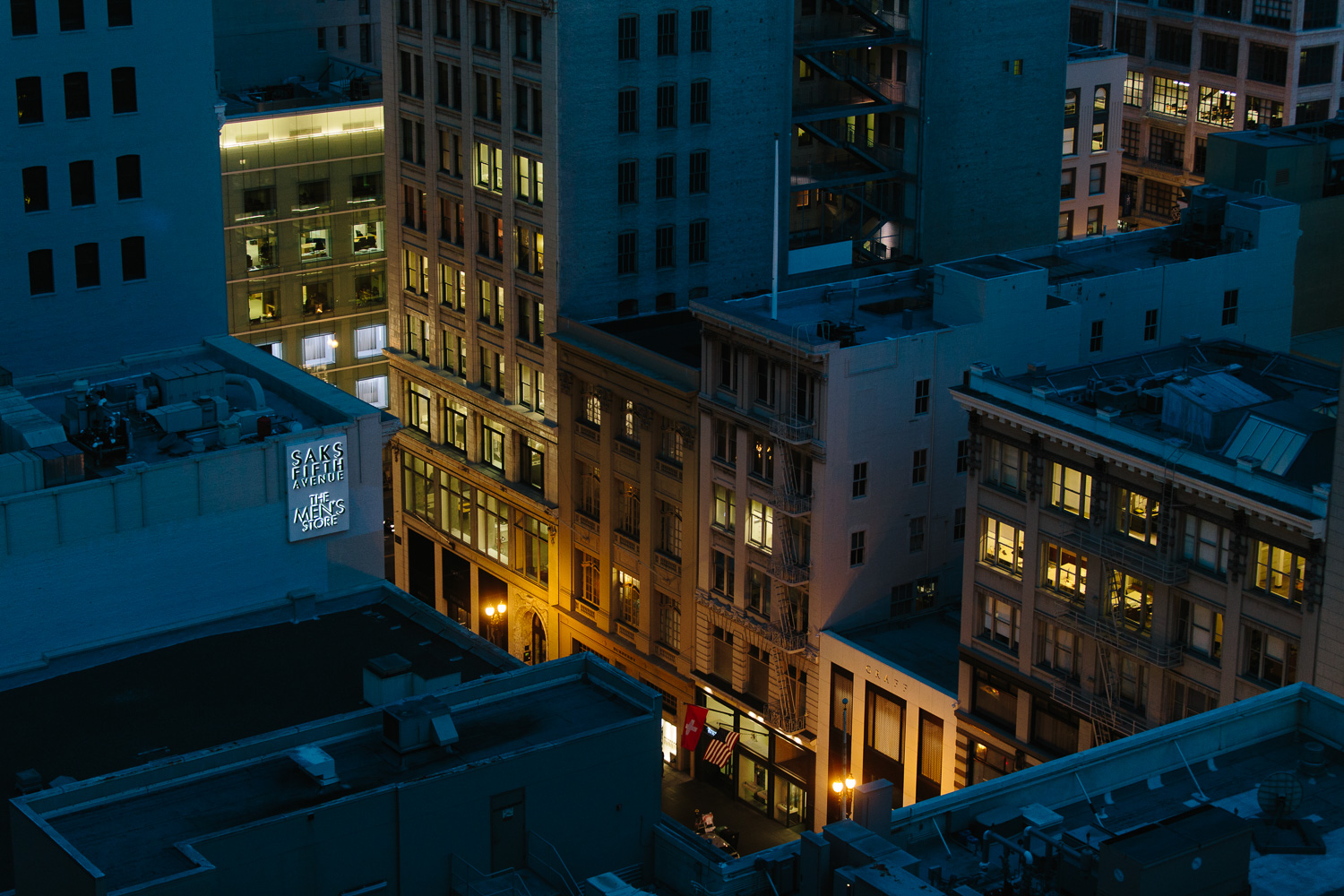 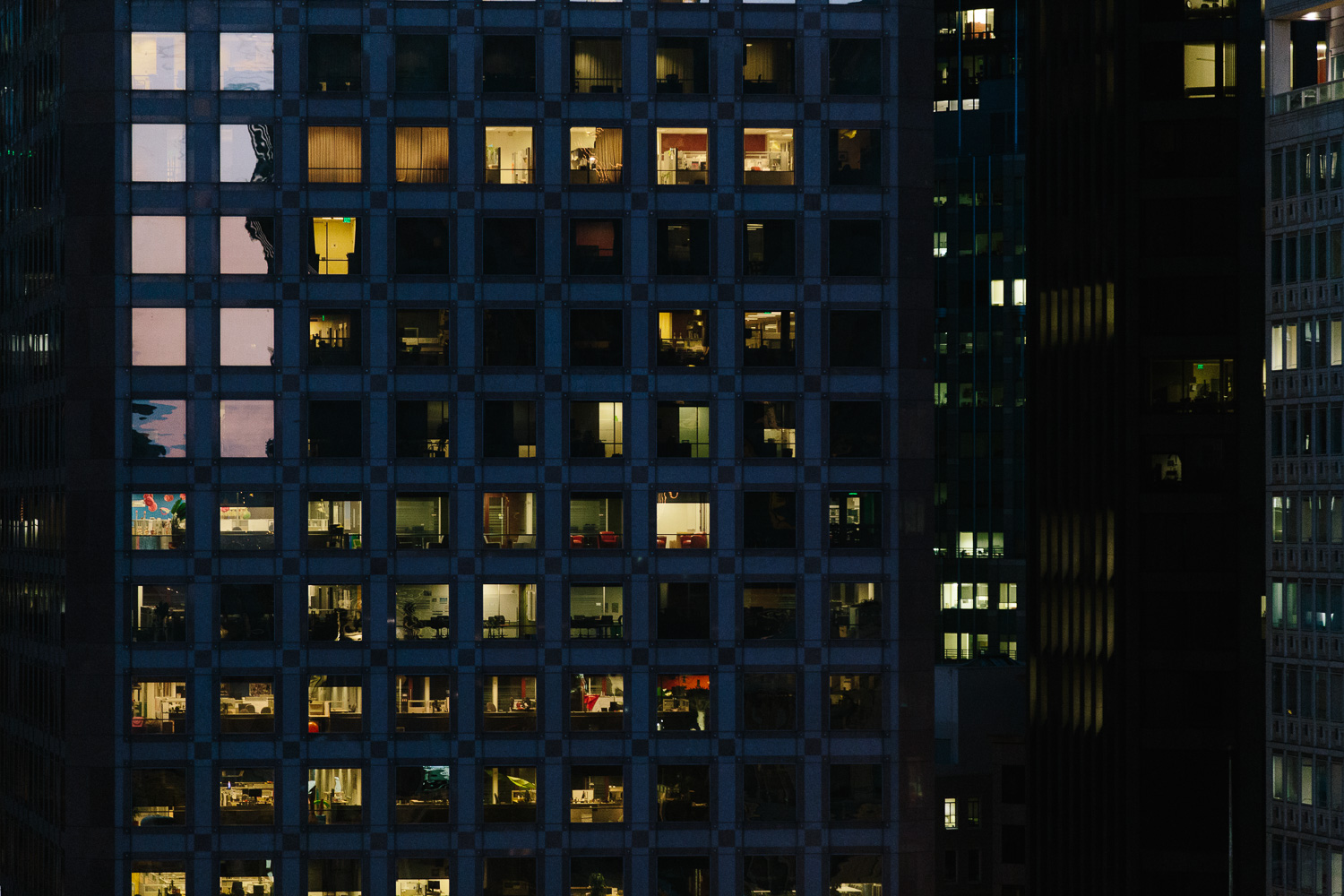 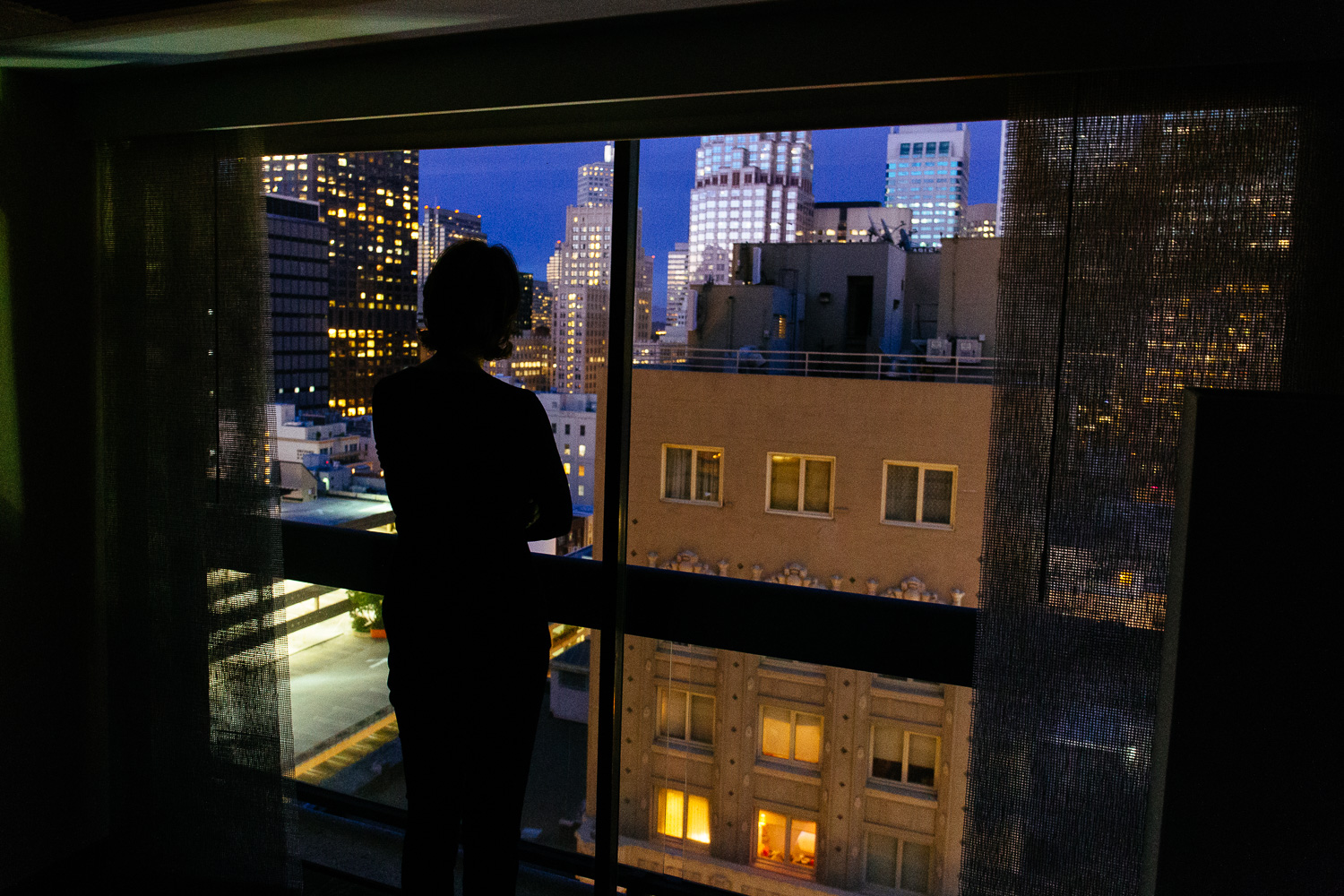