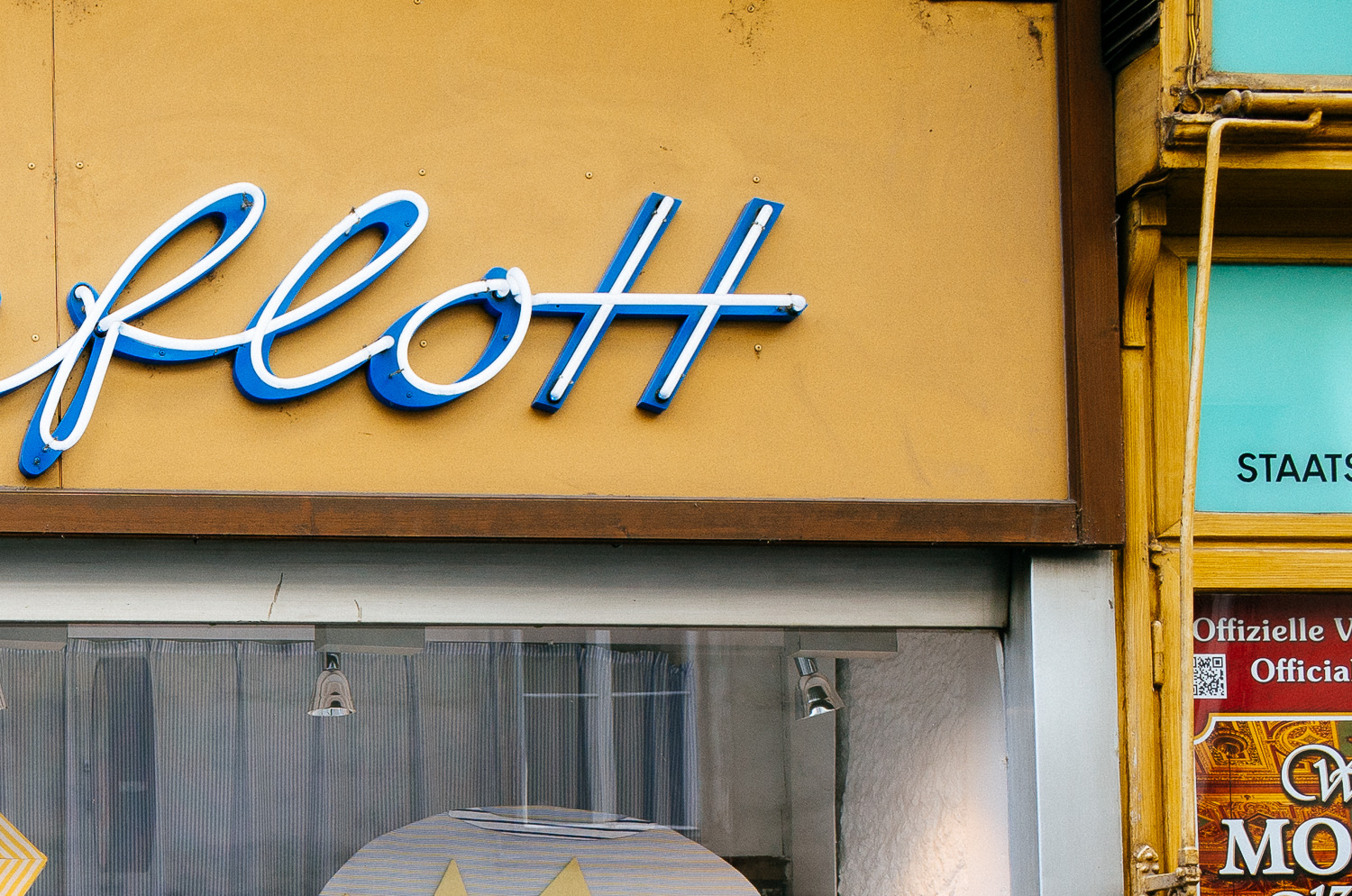 There are fast cameras and there are slow cameras. So it’s rather simple: If you want to shoot action get a fast camera! A camera like a Canon 1DX or a Nikon D4. Problem is: If you don’t want to spend a small fortune on a camera you need to search for alternatives.

Even if you can afford and justify to spend this amount of money you need to ask yourself if you are willing to carry those monsters around. They are almost twice as heavy as “normal” DSLRs.

Much lighter, a lot cheaper and still rather fast are the newest generation of DSLRs with APS-C sensor like a Canon 70D, a Sony A77mkII or, if the small buffer when shooting RAW is not an issue, the Nikon D7100. But today DSLRs seem to be kind of uncool. Still too big and too heavy.

So you want a mirror less camera. Problems is: most of these cameras are still hopeless when it comes to capture any kind of action. While AF for static subjects improved a lot with the latest generation of mirror less cameras their tracking capability still leaves a lot to be desired. With exception of the very latest and top of the line cameras like the Fuji XT-1 or the Sony A6000 you still can’t track anything but a turtle.

With an “older” generation mirror less camera it is worse. AF is slow even for static subjects and causes a latency when you trigger the shutter. This is often described as shutter lag but it is AF lag: the time the camera needs to achieve focus. On my trusty Fuji X Pro-1 this AF-lag is about 0,5 seconds in good light with the 35mm lens, the 14mm lens is faster but still far away from instant. Half a second doesn’t sound like much but in fact it’s far too long to capture that special moment. What to do?

Forget about AF! If you preset focus the only delay you have is the shutter lag. And according to Imaging Resource the shutter lag of the Fuji X Pro-1 is just 0,053 seconds. And that’s fast! 10 times faster than with AF! Slightly faster than a Canon 5DmkIII or even a Canon 1DX (at its default setting).

Here is one of my favorite shots I took in Vietnam. I was sitting in one of these small tour buses when we passed this lady. No chance that I would have captured this picture with AF. My Fuji X Pro-1 is simply not fast enough for that. In such low light the lag caused by the autofocus would have been massive. 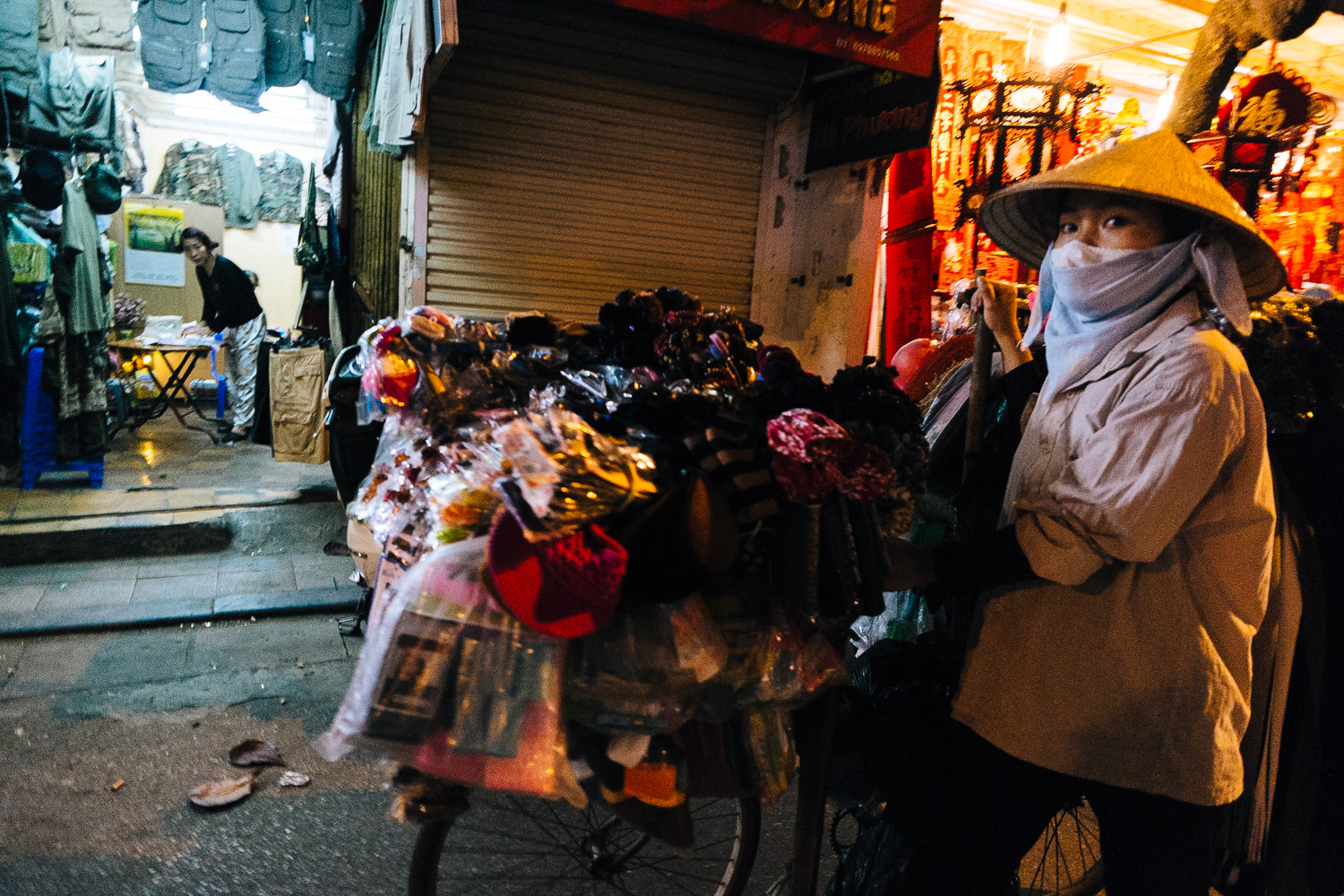 But how to work without AF? That depends on the camera or in case of Fuji also on the lens. Lenses like the 1.4/23mm or my personal favorite the 2.8/14mm offer a focus clutch on the lens. A ring that disengages AF without the need to use the AF switch on the camera body. By just pulling the clutch back the camera now is in manual focus mode. But to focus manually is even slower than to simply rely on AF. The trick is to use zone focus. There is a scale on the lens. Set aperture to something like f5.6 or slower to gain some depth of field and turn the ring that the f5.6 mark is aligned with the infinity mark. Now you can see the closest distance where subjects are still reasonable sharp right underneath the f5.6 mark on the other side.

That’s the theory. In my case the marks do not correspond with reality. But you can easily test it out. I just “auto-focused” on a subject about 1 meter in front of me and than switched back the clutch. The scale showed 2 meters instead of 1 meter. On my first trip I ended up with a lot of miss focused shots especially in cases where I wasn’t able to stop down a lot because the light. You always should test your gear and never trust anything!

Zone focus is the fastest way to take a picture. Short lenses like the XF14 from Fuji work best. With the Ricoh GR you can do the same though the process is different. The feature is called snap focus and here is how it works:

How does it work on the Ricoh GR?

The great thing on the GR is that you virtually can customize every single button and store your customization in three MY settings. Here I just want to explain how I set the camera up for shooting fast.

1. I choose Ricoh’s unique TAV mode because it allows me to preselect aperture and shutter speed while I can still use Auto-ISO and exposure compensation. Not a big thing you might say. Well try to do that on a Canon DSLR or on a Fuji X!

2. I assign the Effect button on the left side of the camera body to toggle in between AF and snap focus plus the Function 2 button on the back to set the distance. You can choose 1m, 1.5m 2m, 2.5m, 5m and infinity.

In TAV mode I usually set f4.5 or even f5.6 if light level allows and a shutter speed of 1/500s (again if light permits). That already allows some reasonable depth of field especially if your subject isn’t too close to the lens. 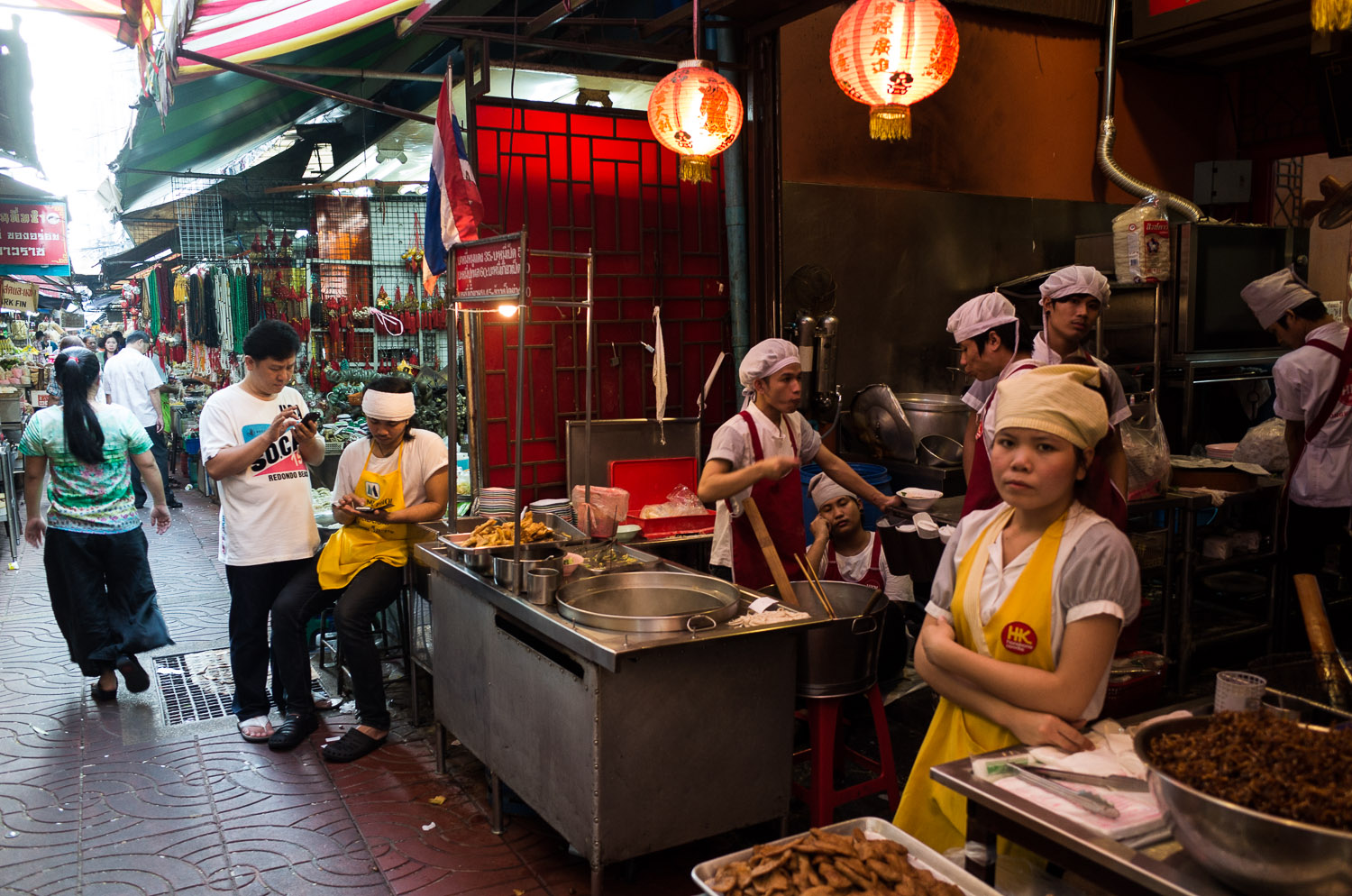 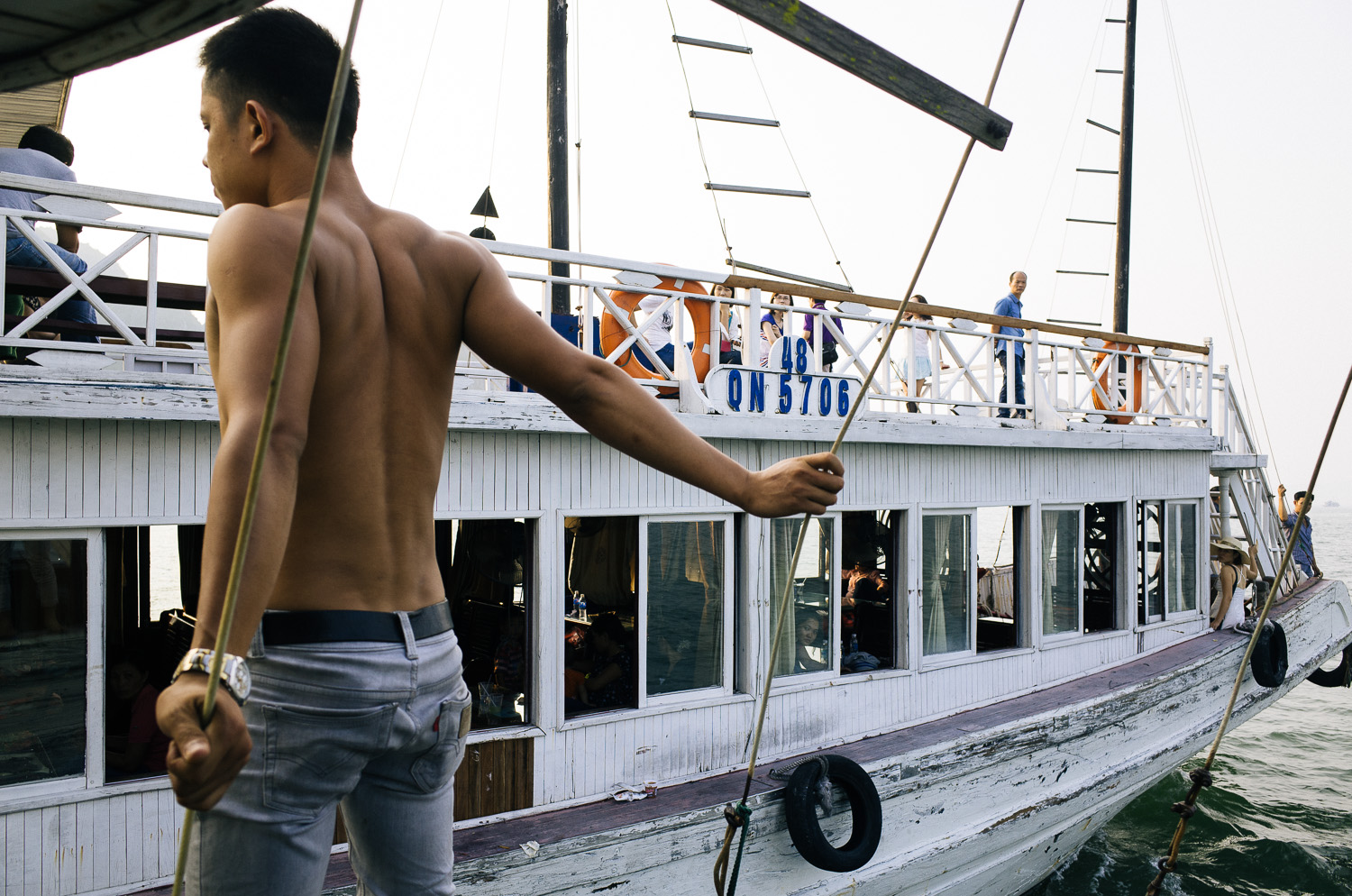 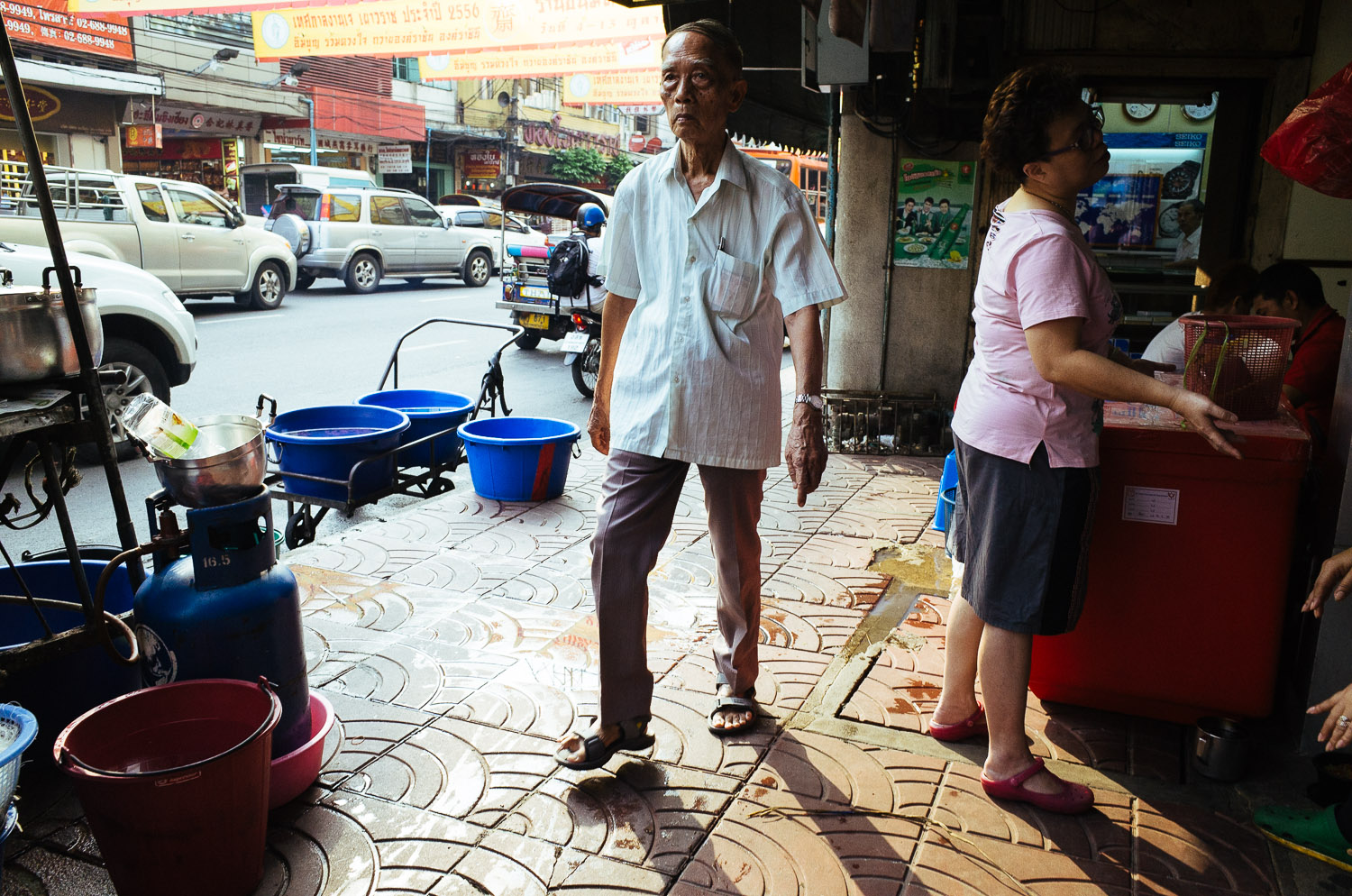 And here is another thing I have learned. We street shooters are rather optimistic when it comes to estimate how far away the subject will be from the front element of our lenses. As a result I preset distance to 1.5 meters for my first shooting which was of course nonsense. Hardly ever your main subject will be that close to you unless you are taking pictures of bugs. But if that’s the case you most likely don’t use a Ricoh GR in snap focus mode. A quick look at the small green bar that indicates the area of sharpness should have told me already that it makes no sense. You need f9 to get distant subjects sharp. f9 and 1/500 – good luck!

Most of the time, especially when shooting in the shade or at the end of the day, ISO will go up like mad. In Bangkok ISO went up to 25.600 when I was using f5 and 1/320s at a street market underneath the MRT!

Try 2.5 meters first. Trust me. f5 already gets you to infinity and f4.5 is still close enough to render sharp backgrounds. All subject in between about 2 meters to infinity will be sharp. Here is another strange thing I have learned: In street shooting if your “main” subject is really close it doesn’t hurt if it is slightly out of focus sometimes it even adds to the picture. Sounds crazy? Just give it a try! 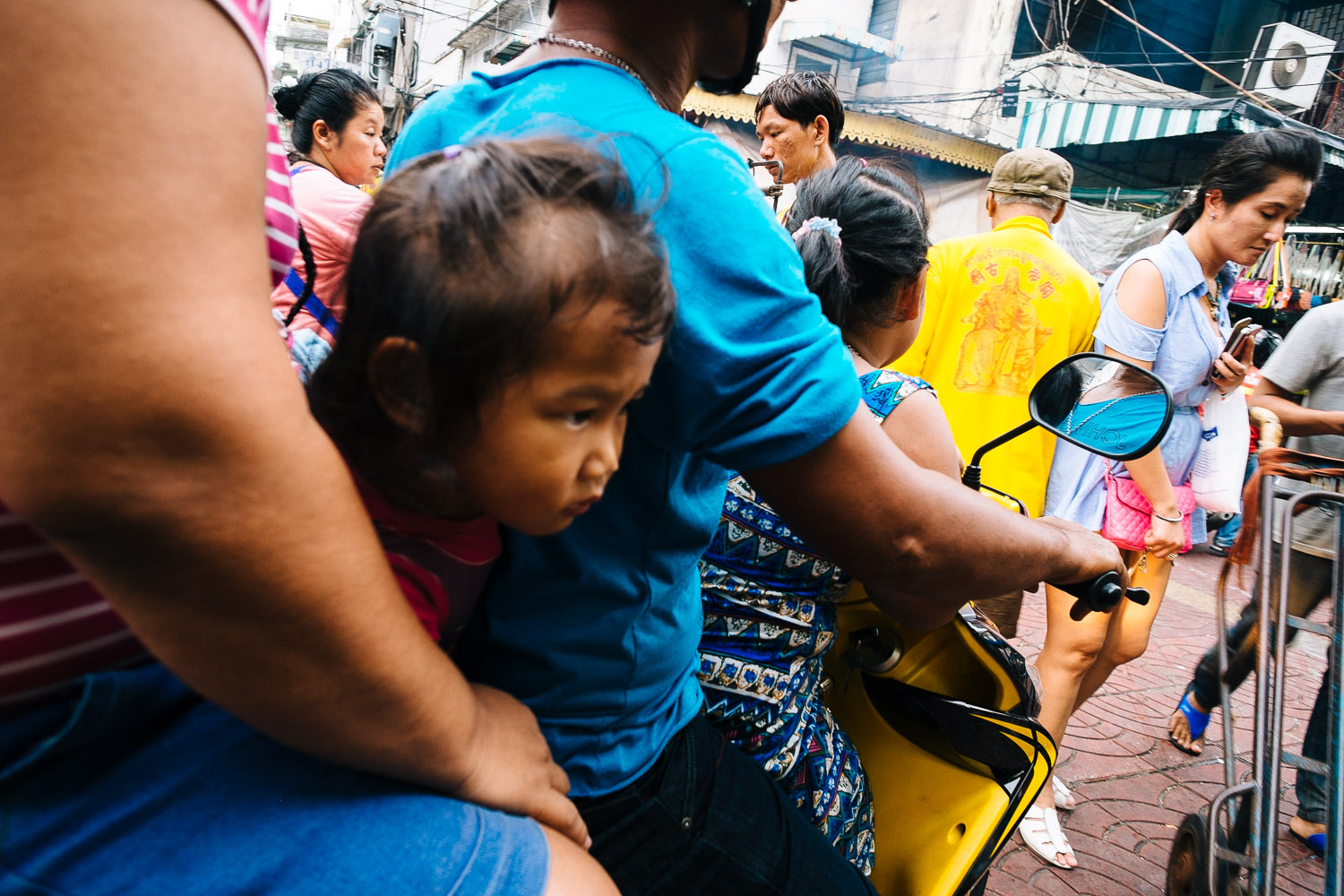 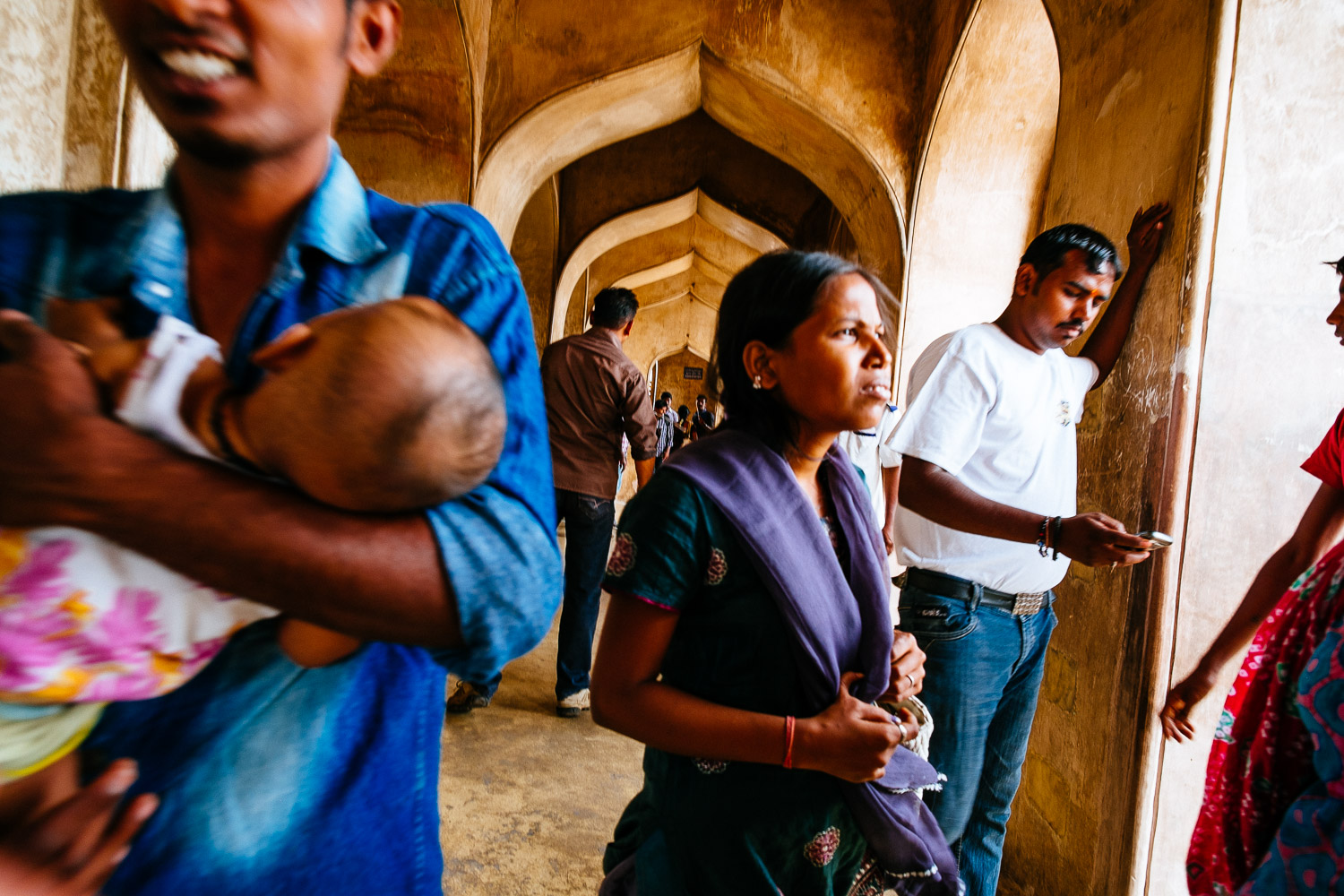 If you are shooting out of a car the infinity setting is the best solution to avoid that you end up with nice and sharp pictures of the dead bugs on your windscreen. When shooting with AF the camera will most likely focus on the bugs instead of your real subjects. 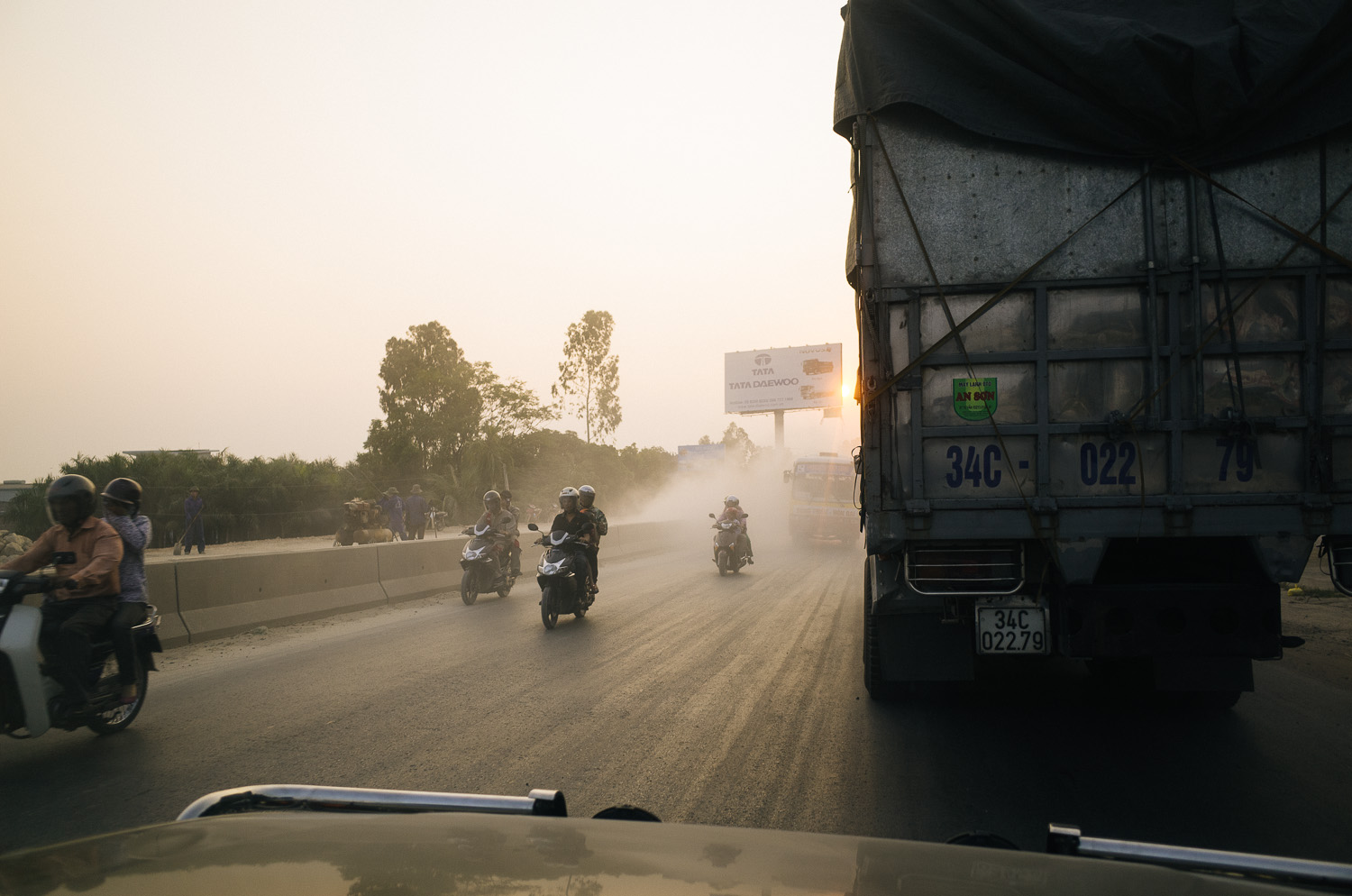 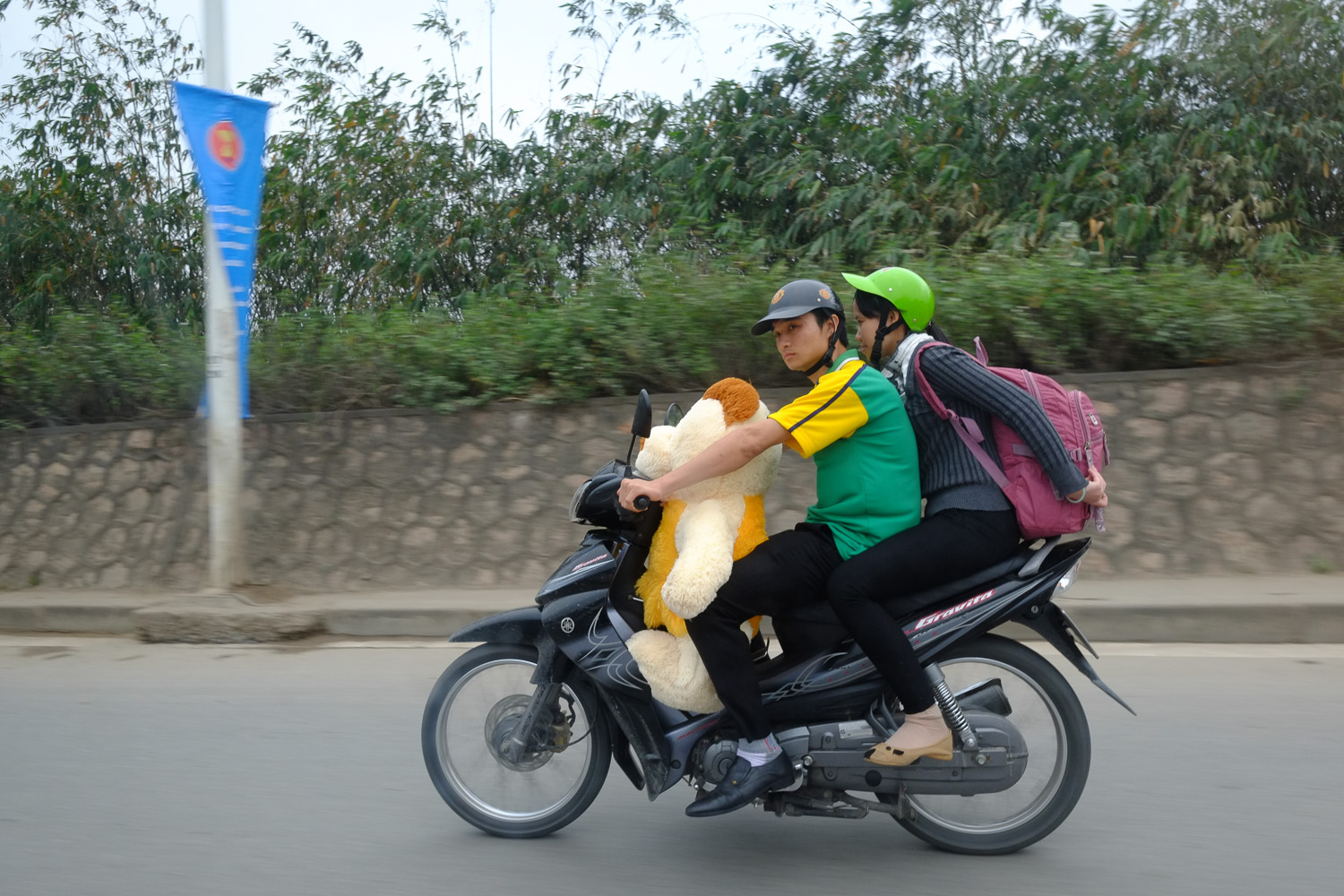 What are the disadvantages of shooting without AF?

There is a certain learning curve as described above. In order to avoid frustration I recommend to try at home first before you shoot like that on your once in a life time trip.

What are the advantages of shooting without AF?

1. It is incredibly fast! As described above the Fuji X Pro-1 or the Ricoh GR (both are not known for being speed monsters) become a Canon 1DX! There is very little delay which can be further decreased by shooting in real manual exposure mode. By real manual mode I mean without Auto ISO. The camera must not evaluate exposure therefore there is no delay. But the delay caused by the metering is much shorter than the one caused by autofocus. You need to decide if it is worth to give up that.

2. Total freedom regarding composition! No matter if you use “prefocus and recompose” or the even slower “relocate the AF-point to your subject” method both will take almost forever. The only option to get a quick shot when using AF is the very funny “focus and shoot” – feature on Olympus and Panasonic cameras. Like on your smartphone you select focus point with your finger tip on the touchscreen but you even take the shot at the same time! I love to shoot like that with my Panasonic GM1 with the Olympus 1.8/45mm lens attached. But it only works on those cameras and only thanks to their touch screens and their blazing fast AF. As great as it is it is still slower than shooting without AF. 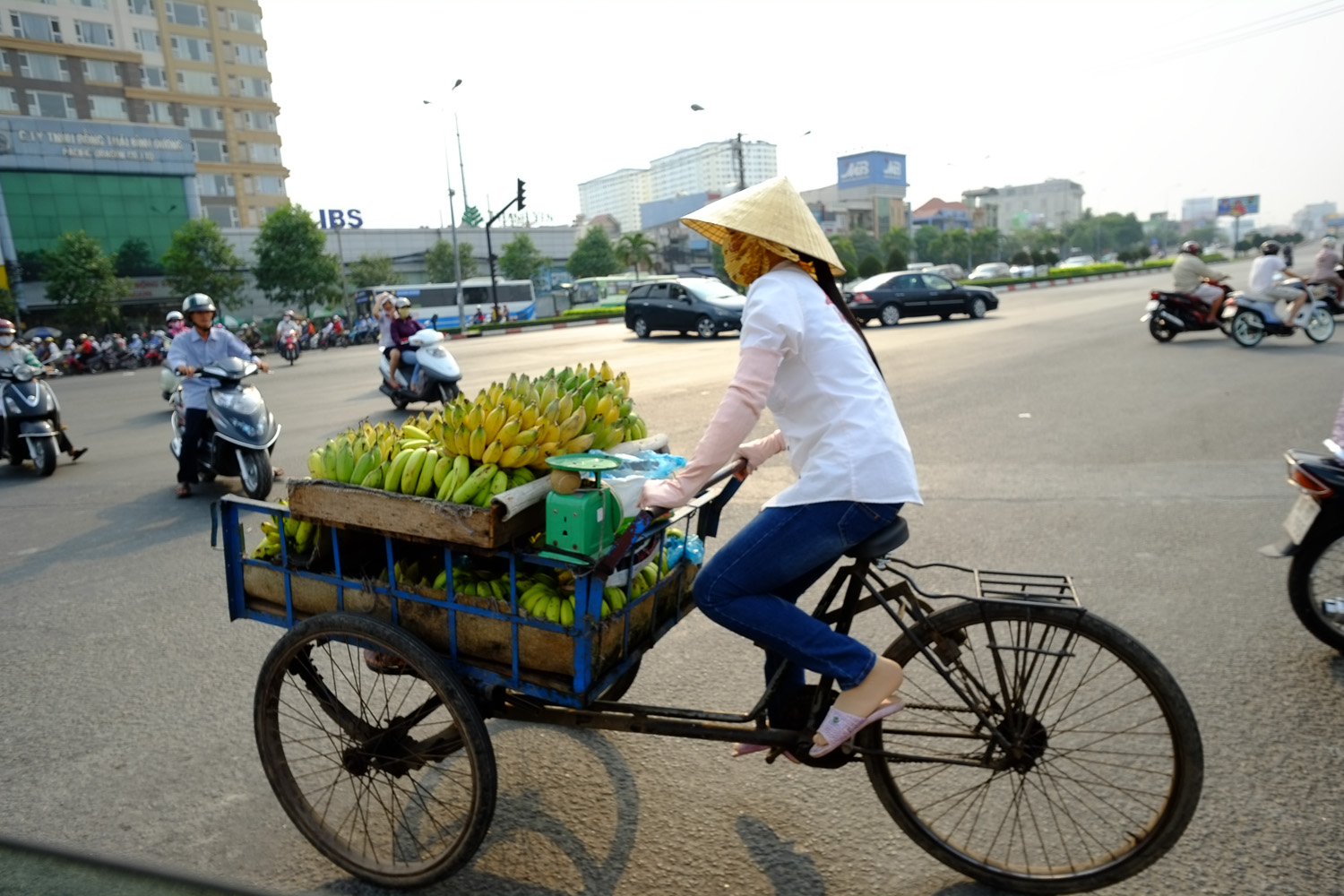 Is this technique only relevant for street shooters?

You do not have to be a street shooter to use this setting. If you have kids and you want to capture them running around this might be the only solution to capture the special moment or that special expression in their faces. But there are drawbacks:

1. It works only with wide angle lenses/short distance.

2. Depth of field will be big. Everything in focus means your pictures will have a kind of compact camera look.

Can I shoot action with a mirrorless camera?

Of course you can. You can also join a gun fight with a knife. I still think it’s better to get a fast DSLR if your main subject is action or your kids at play. If it has to be a mirror less camera for whatever reason (because they are cool) you can take a closer look at the new Sony A6000 or the Fuji XT-1 but I recommend to try before you buy. 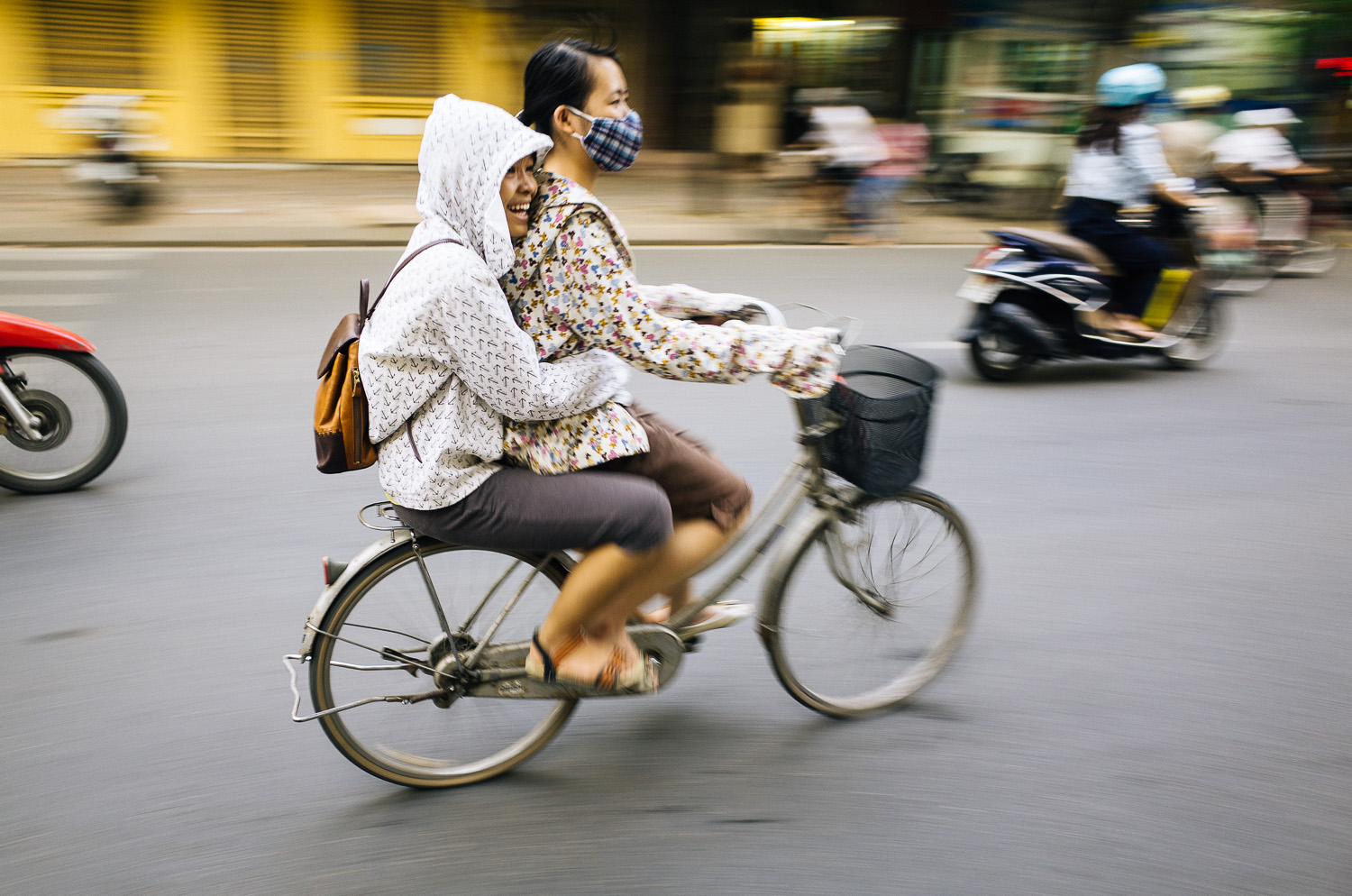 PS: Some try to convince others (or themselves) that mirrorless cameras are good enough for action by posting panning shots of racing cars. A racing car coming around the corner doesn’t proof anything! It’s true: a racing car most likely is faster than your toddler but 1. Racing cars usually are much farther away. 2. As long as the car doesn’t come straight towards you there is no need for fast AF. There is no need to use AF al all for those kind of shots.

But no matter if your camera is fast or slow. If you are shooting with a wide angle lens you should consider to switch off AF to practice zone focus. Free yourself from autofocus. It’s a real pleasure and you will never miss that special moment again.