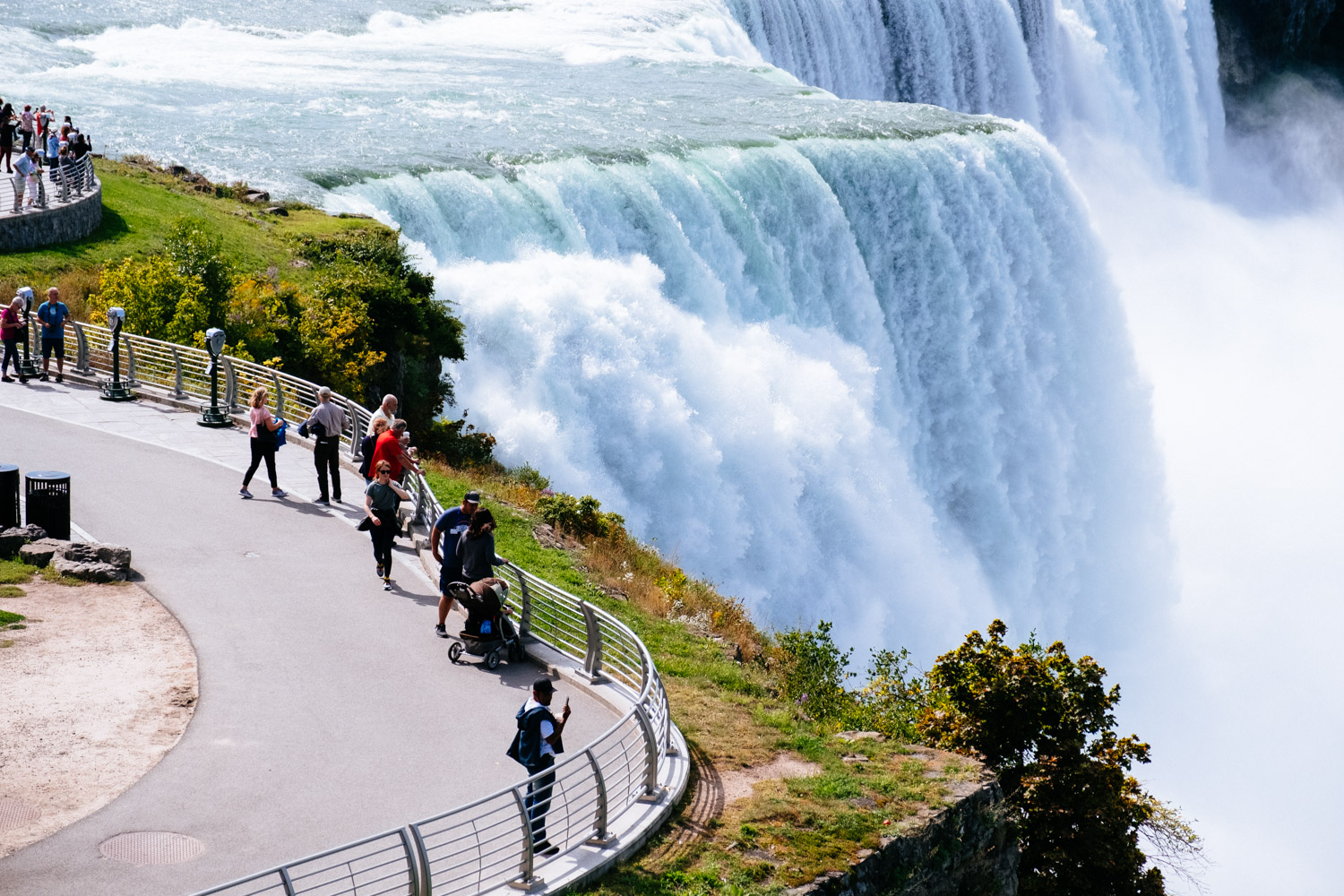 When we decided to finally visit the East side of the USA it was clear that we have to come here to the Niagara Falls. And rightly so.

Yes I have seen waterfalls before but that one is different. It’s not su much the height but the size and the amount of water. It is breathtaking. The waterfalls already looks spectacular when viewed from the top but of course if you come here you have to take the boat, The Maid of the Mist, to get the real experience. And that’s what we did. 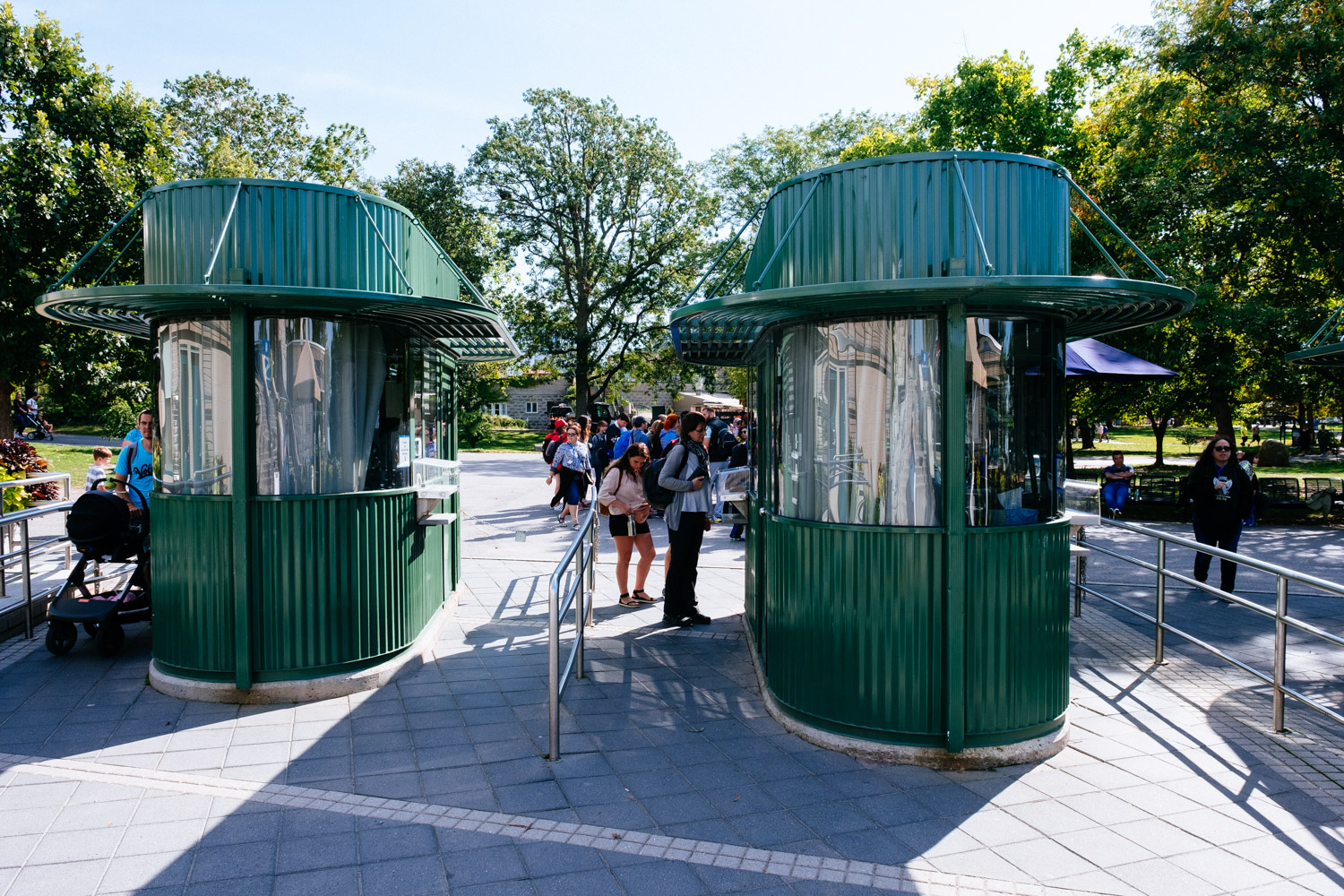 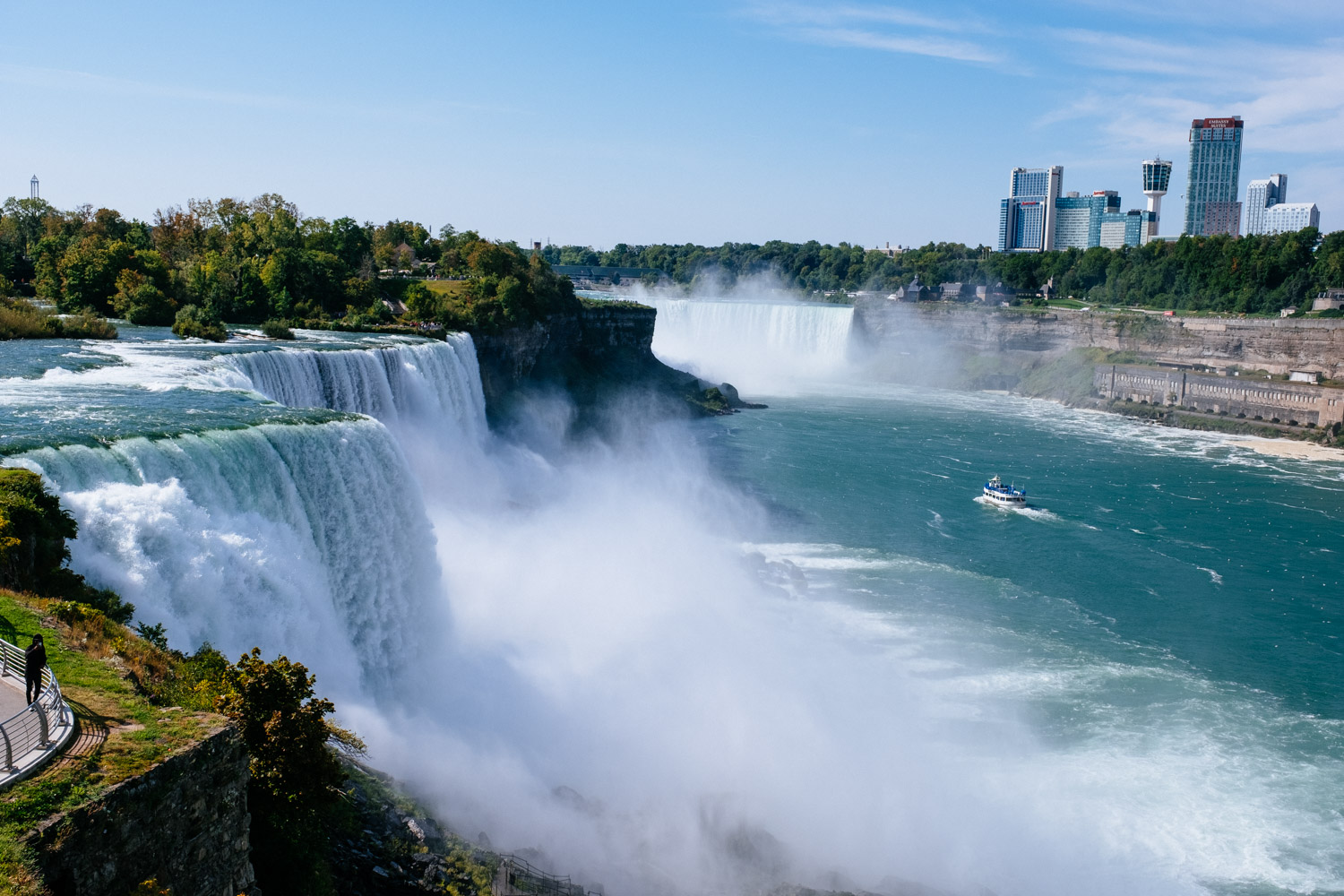 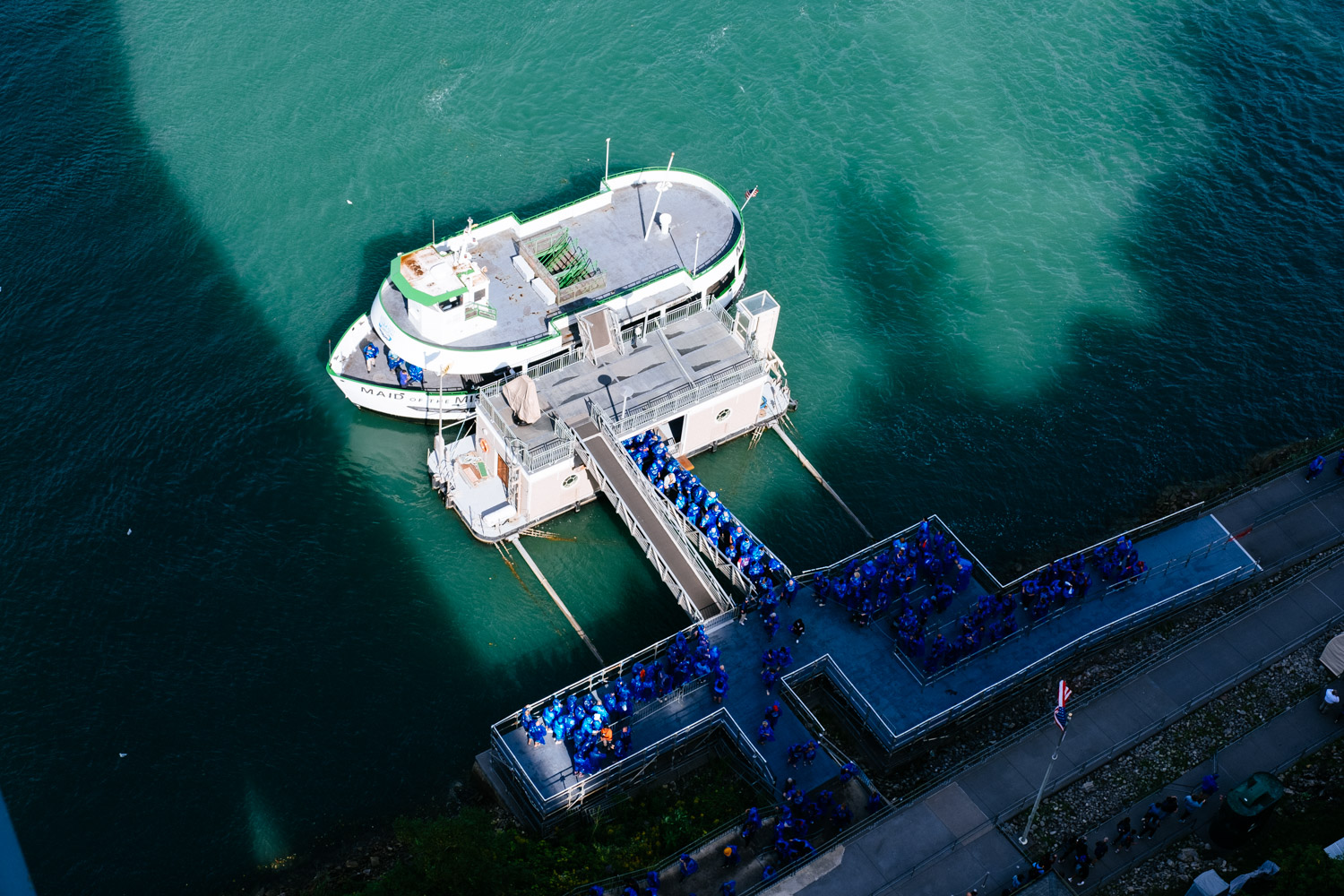 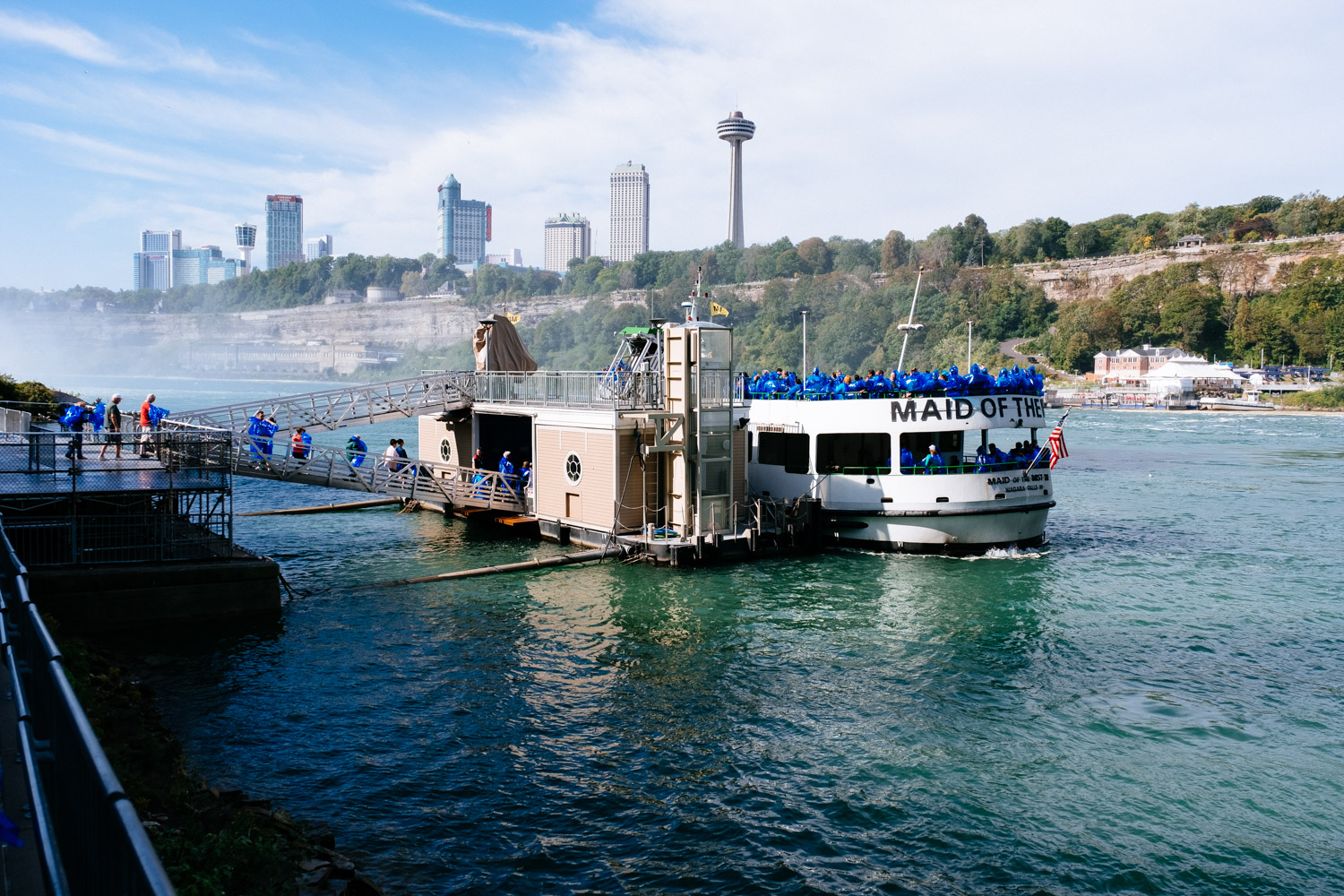 You can tell that it is going to get wet because they give you those blue rain ponchos. For me this was the opportunity to test if the weather sealing of the Fuji X-H1 and the XF 16-55/2.8 WR is serious. I left the other lenses in the car because it was clear to me that I wouldn’t have the opportunity to switch lenses. But that is the beauty of the 16-55 – there is no need to switch to another lens. It gives me a nice wide angle and a pretty decent tele lens too and of course everything in between.

The X-H1 is the most solid camera from Fuji that I have ever owned and it is more solid than most cameras I owned before that. It feels much more solid than my last DSLR, the Canon 6D, which I would never have taken on such a trip. The Fuji X-H1 feels more like my first DSLRs, the Nikon D1 and the D2H, and that’s as solid as it gets. 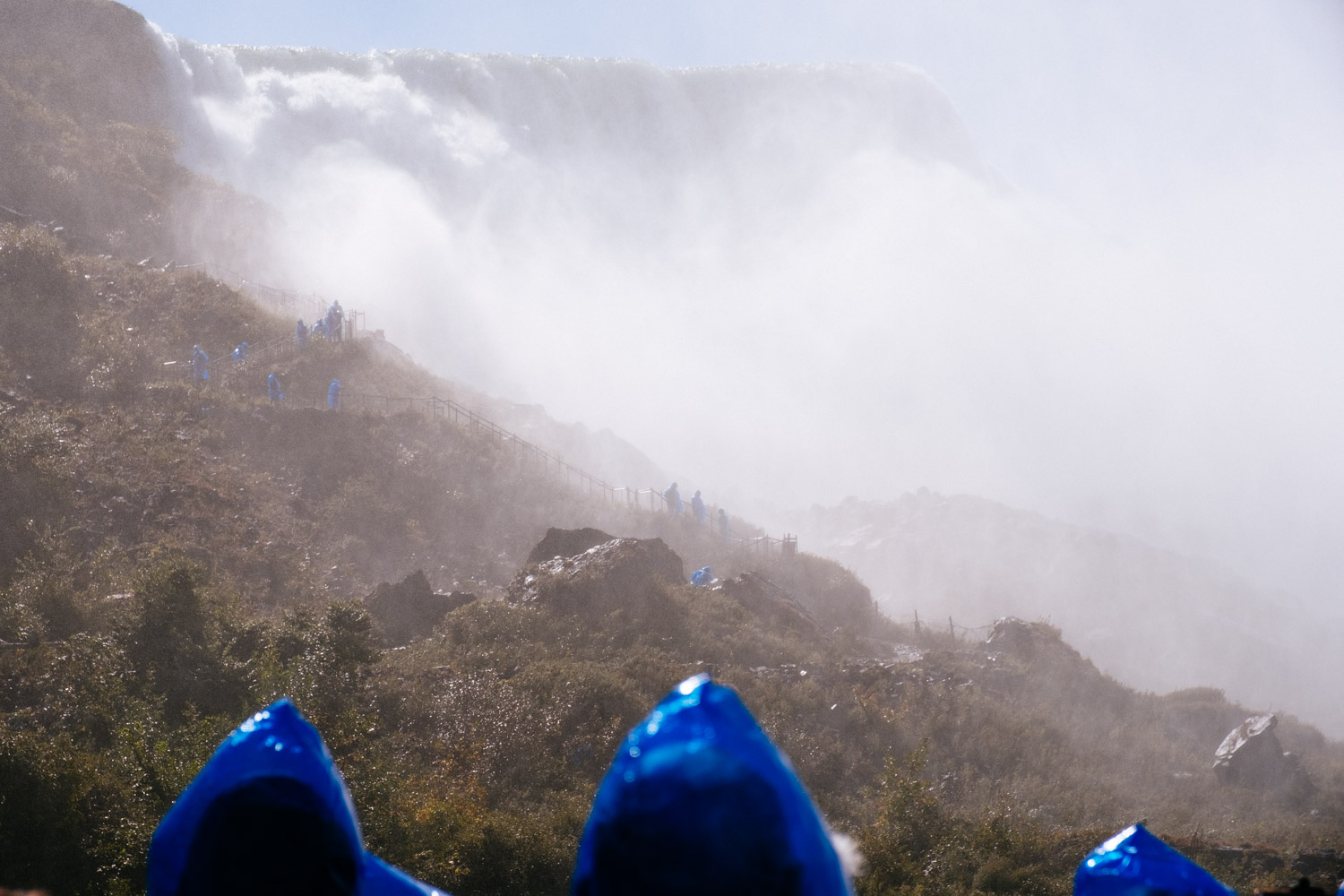 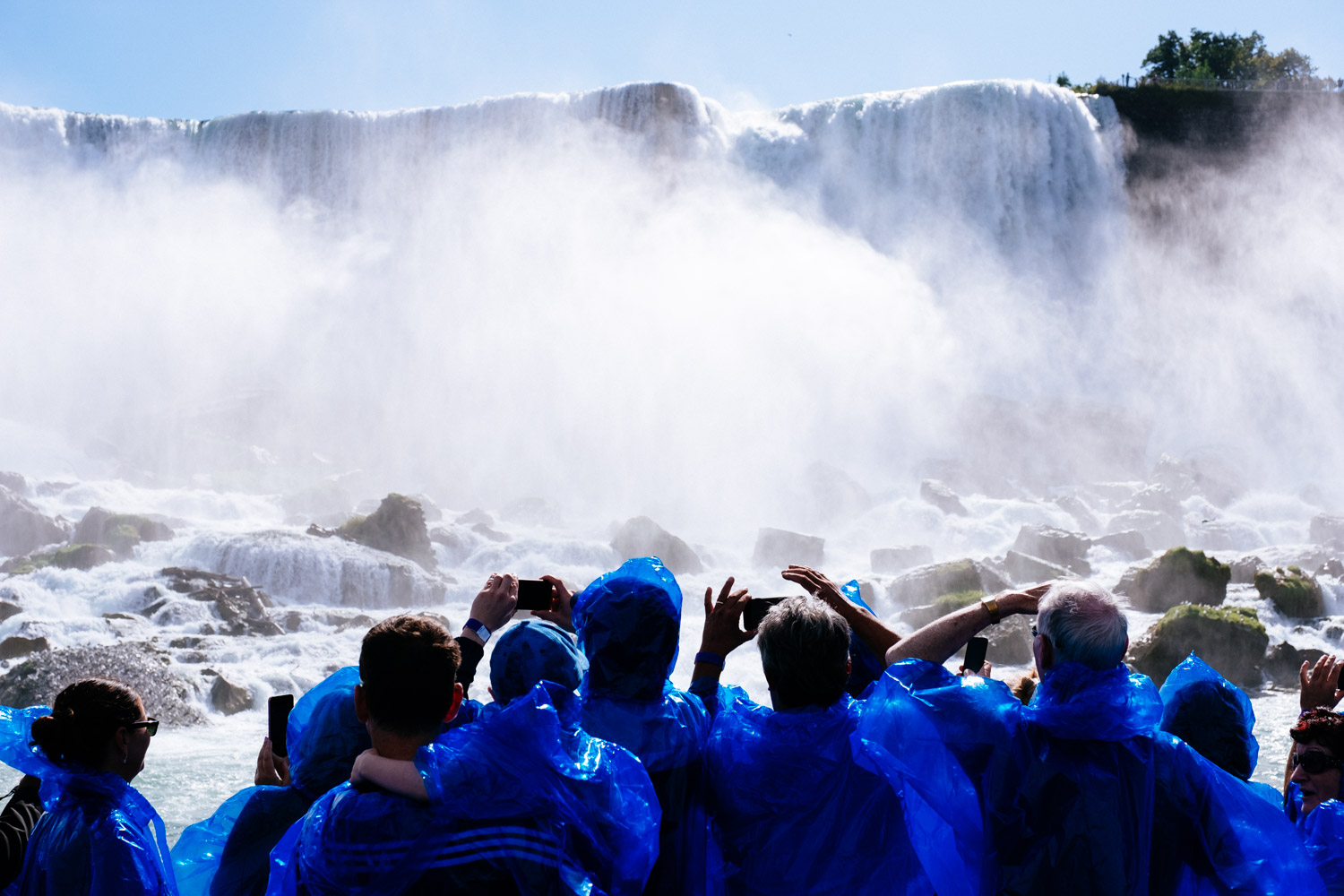 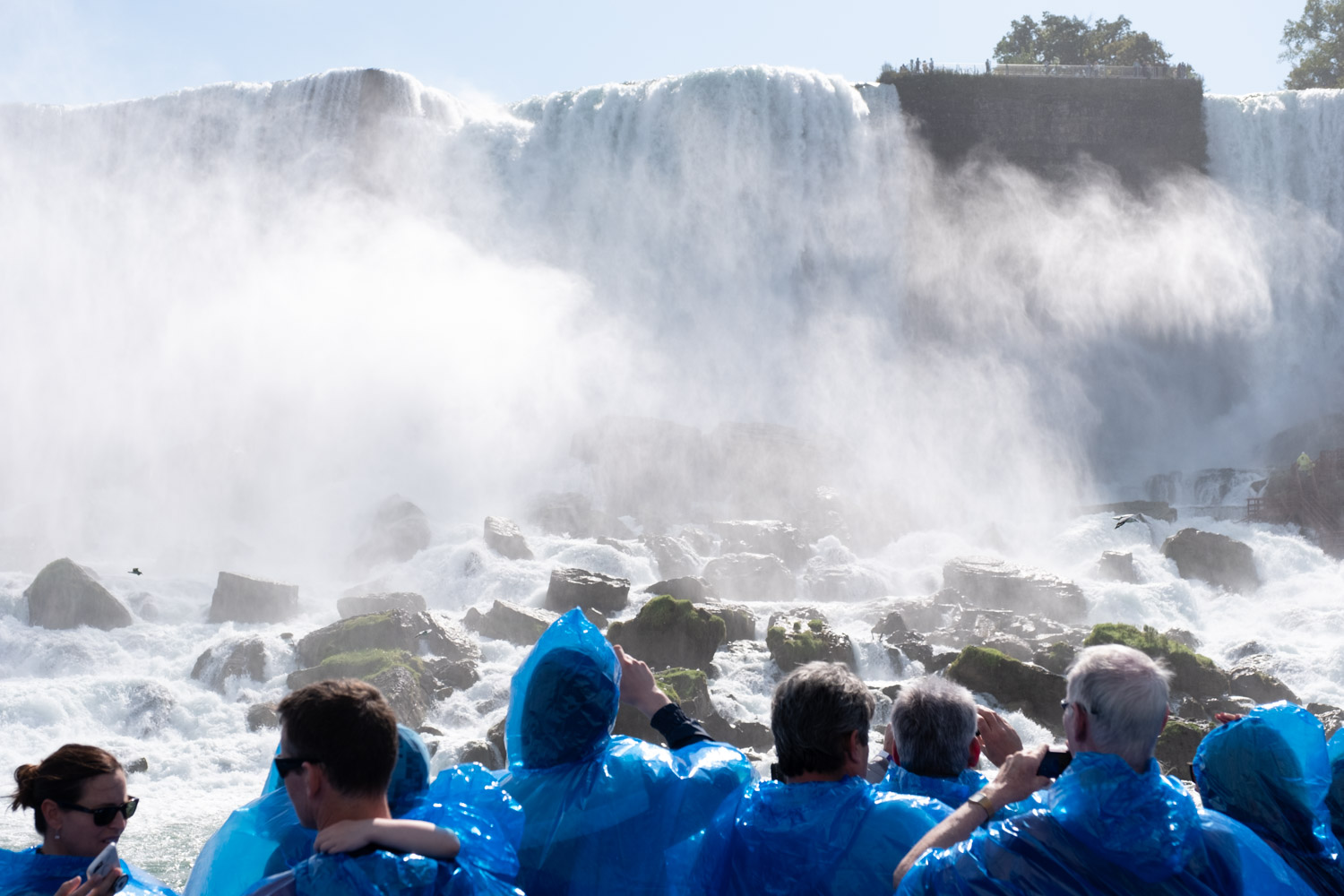 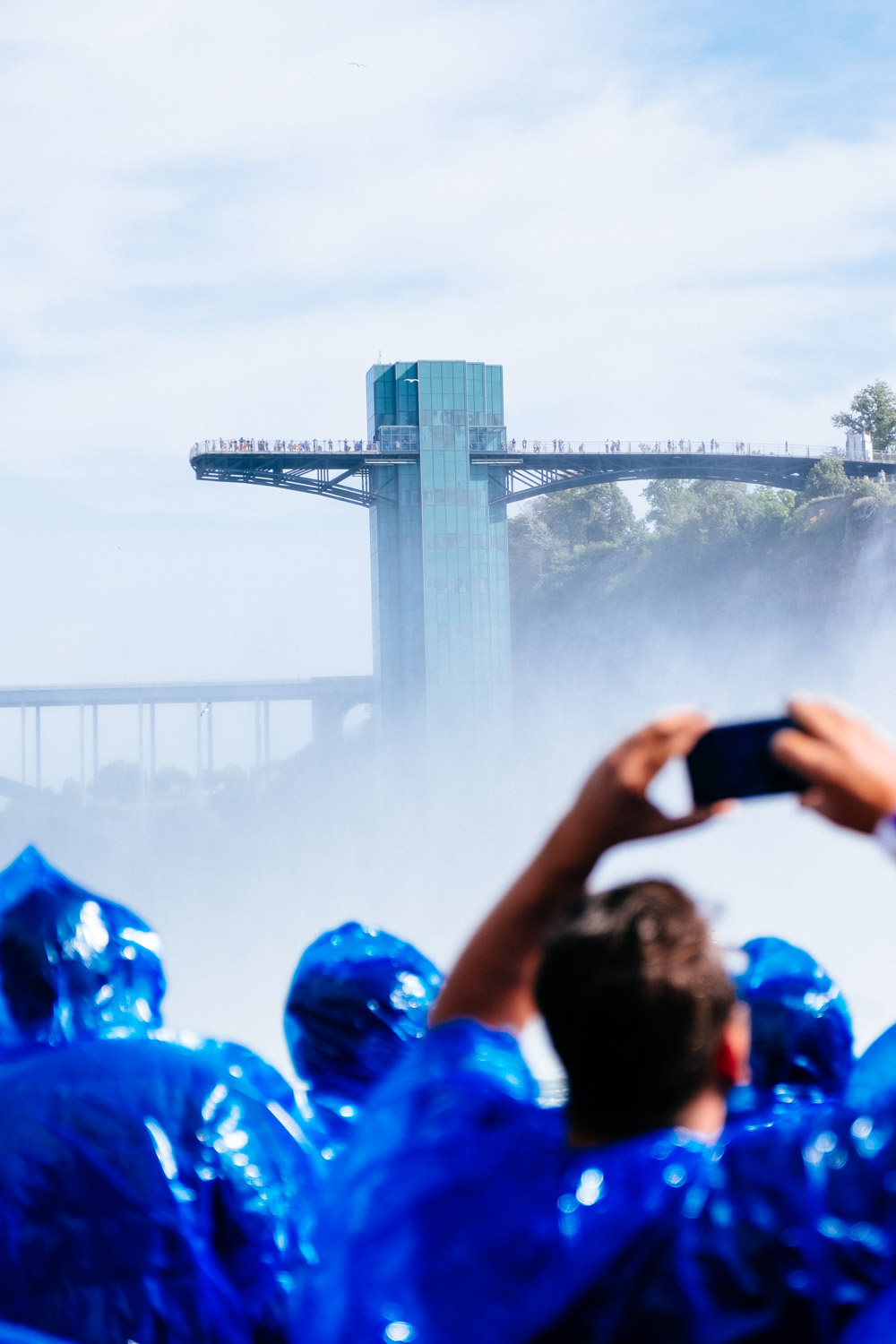 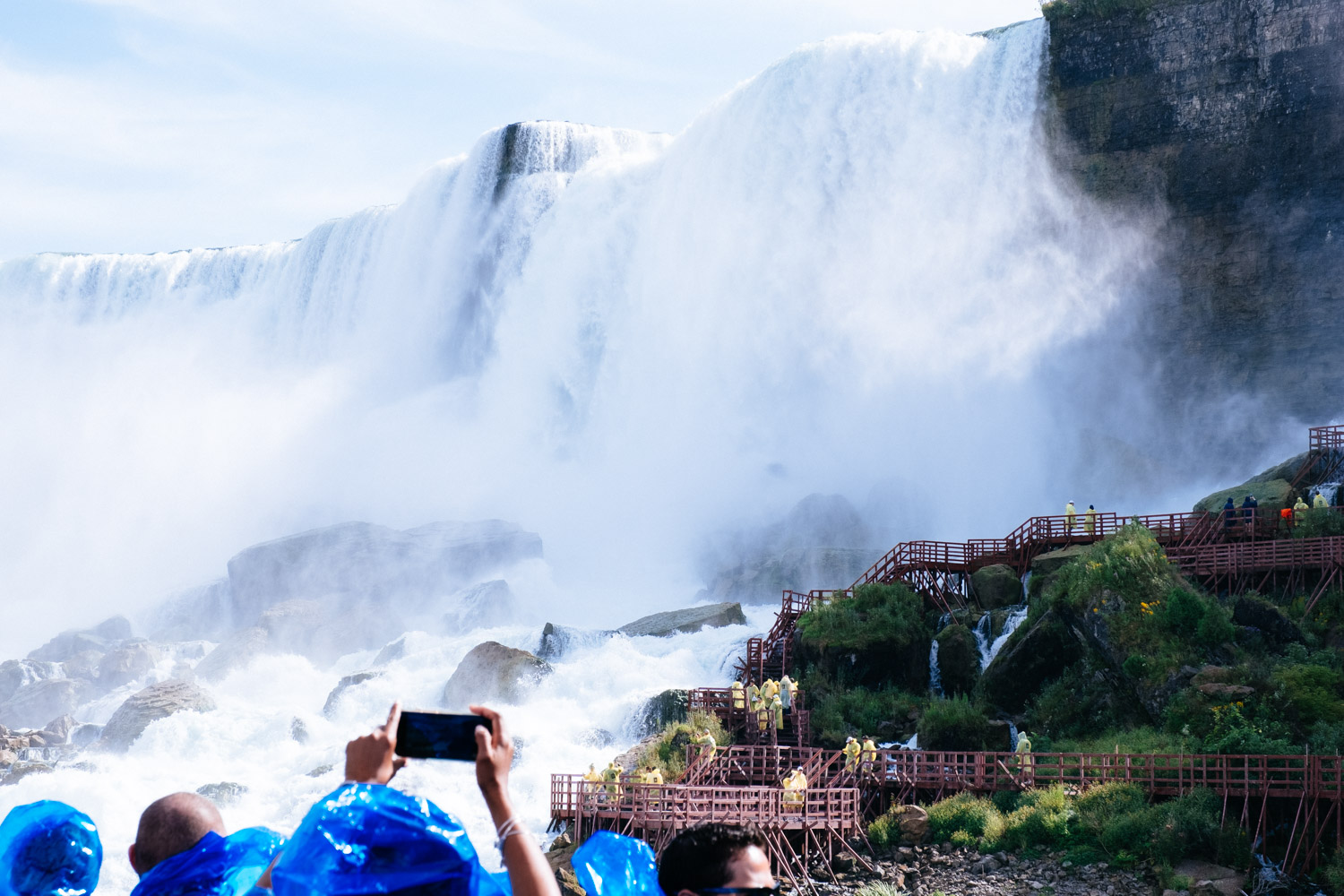 When we passed the the first part of the waterfall it already was more than just a little misty and I constantly wiped the front element of my lens with a tissue to get rid of the water droplets. In the beginning I also tried to wipe the lens barrel and the camera body but quickly gave up on that. It was just too much water and I was afraid to run out of paper tissues.

We passed the American Falls and the Bridal Veil Falls and then we got closer to the Horseshoe Falls or Canadian Falls. This is where 90% of the water of the Niagara river comes down. And you can feel it. I never experienced such an incredible power before.  There is a strong wind the closer the boat gets to the falls and there is water coming from all directions. At that point I gave up to wipe the front element of the lens, there was just too much water.

I later opened up the lens to f2.8 to avoid that water droplets would spoil my images and solely focused on taking pictures instead of trying to keep my gear dry. At this point I was the only guy with the camera still out of the camera bag and shooting. But of course most smartphones were still out. Another reason why smartphones are the most popular cameras now. You don’t have to worry to shoot them in such conditions. 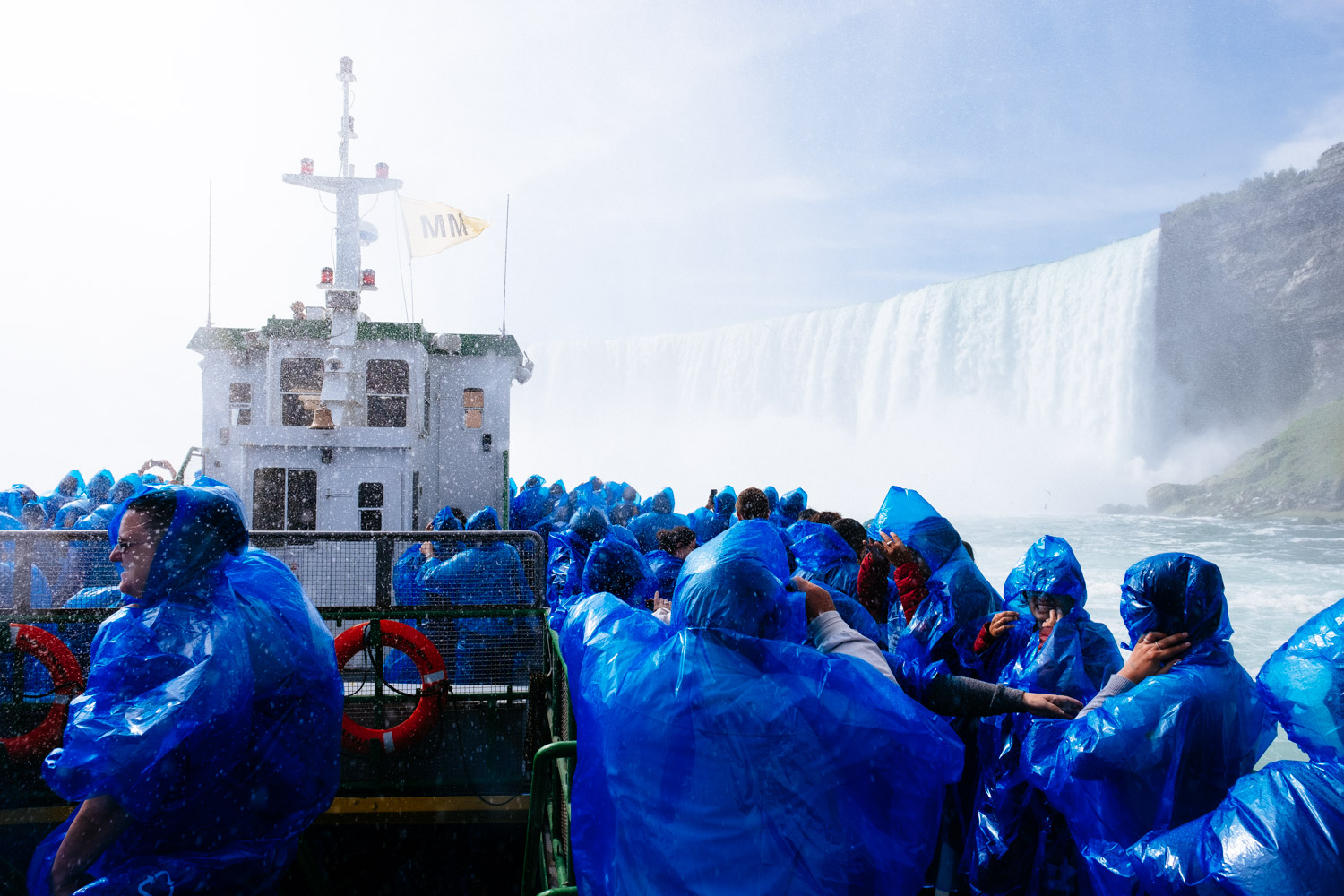 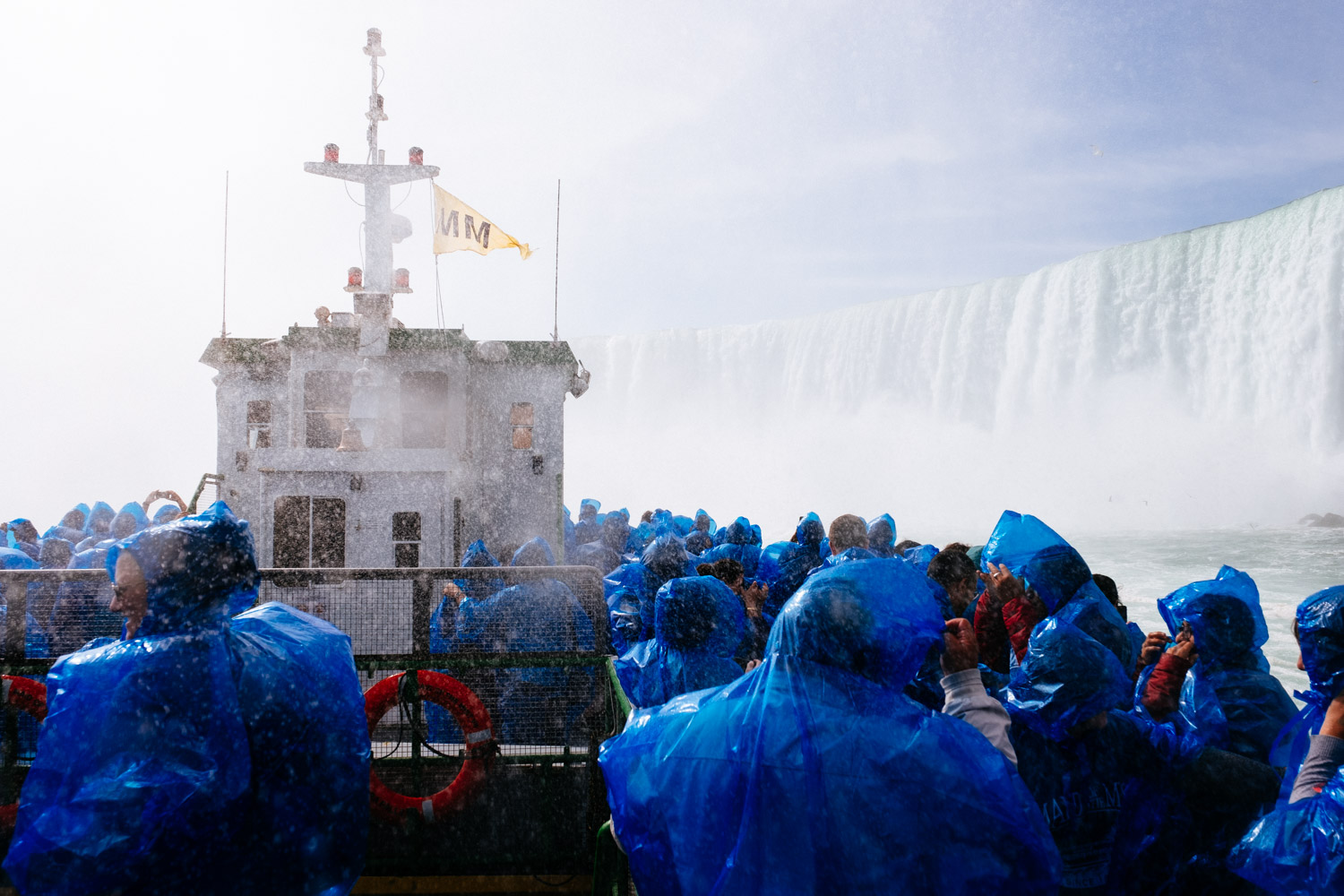 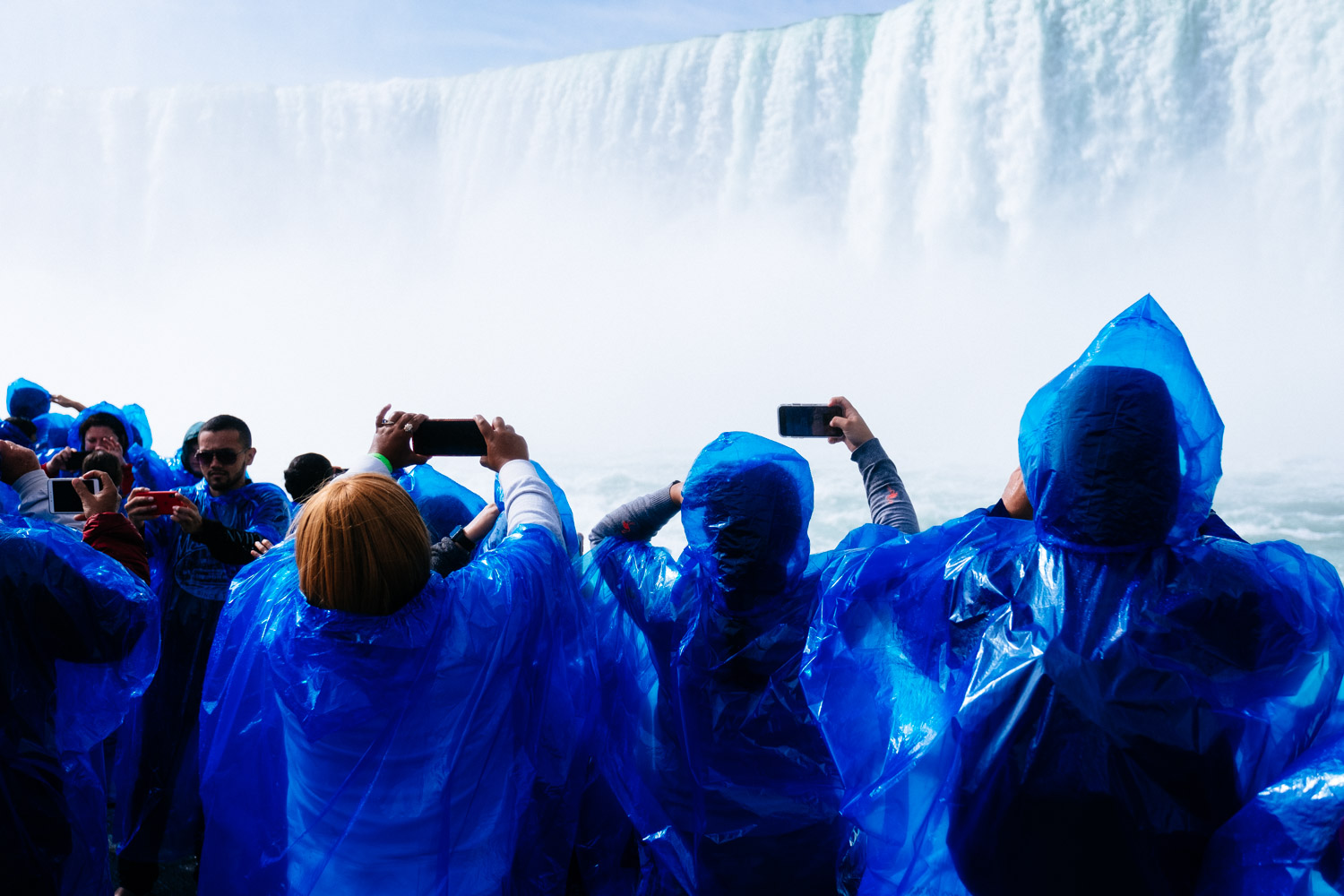 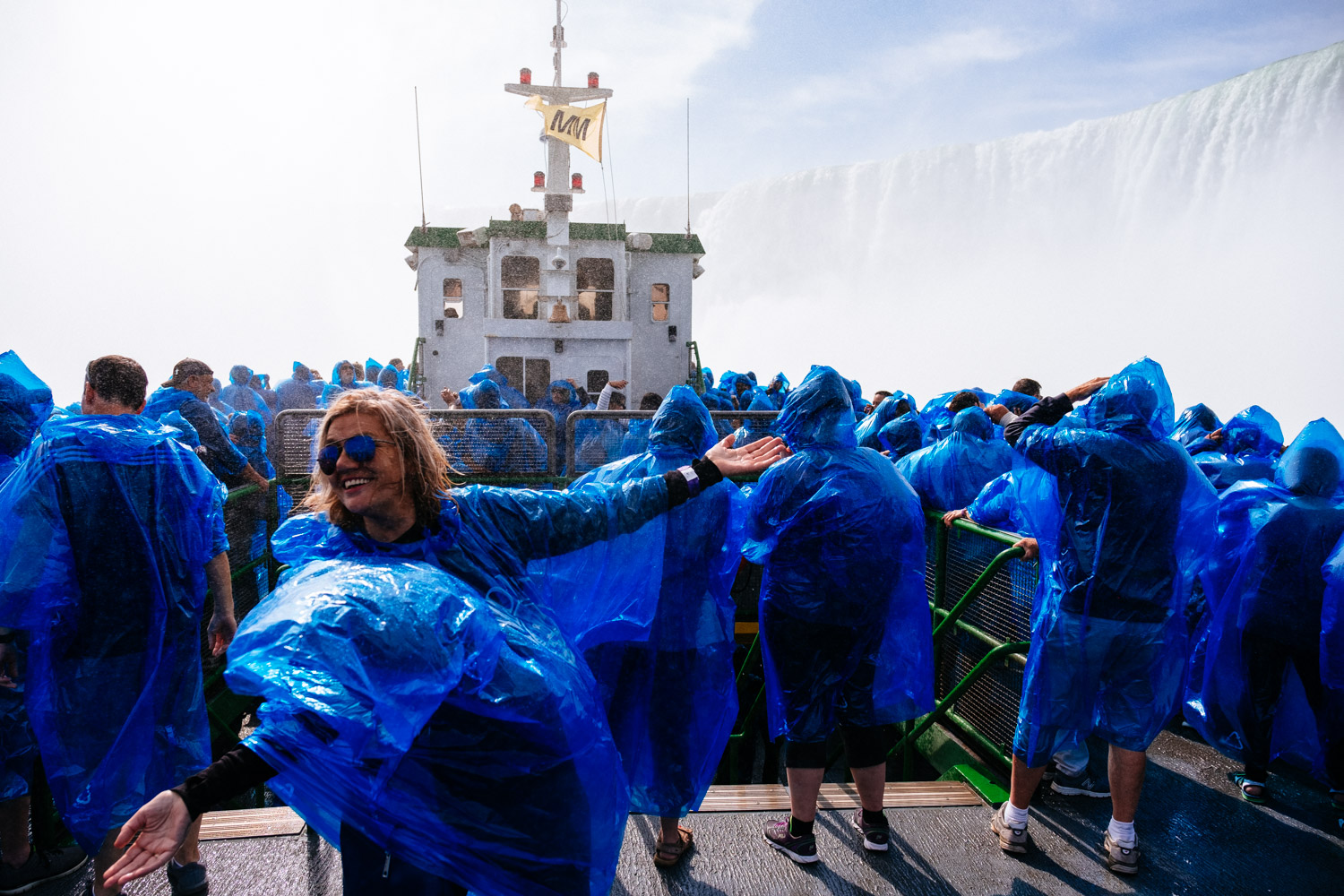 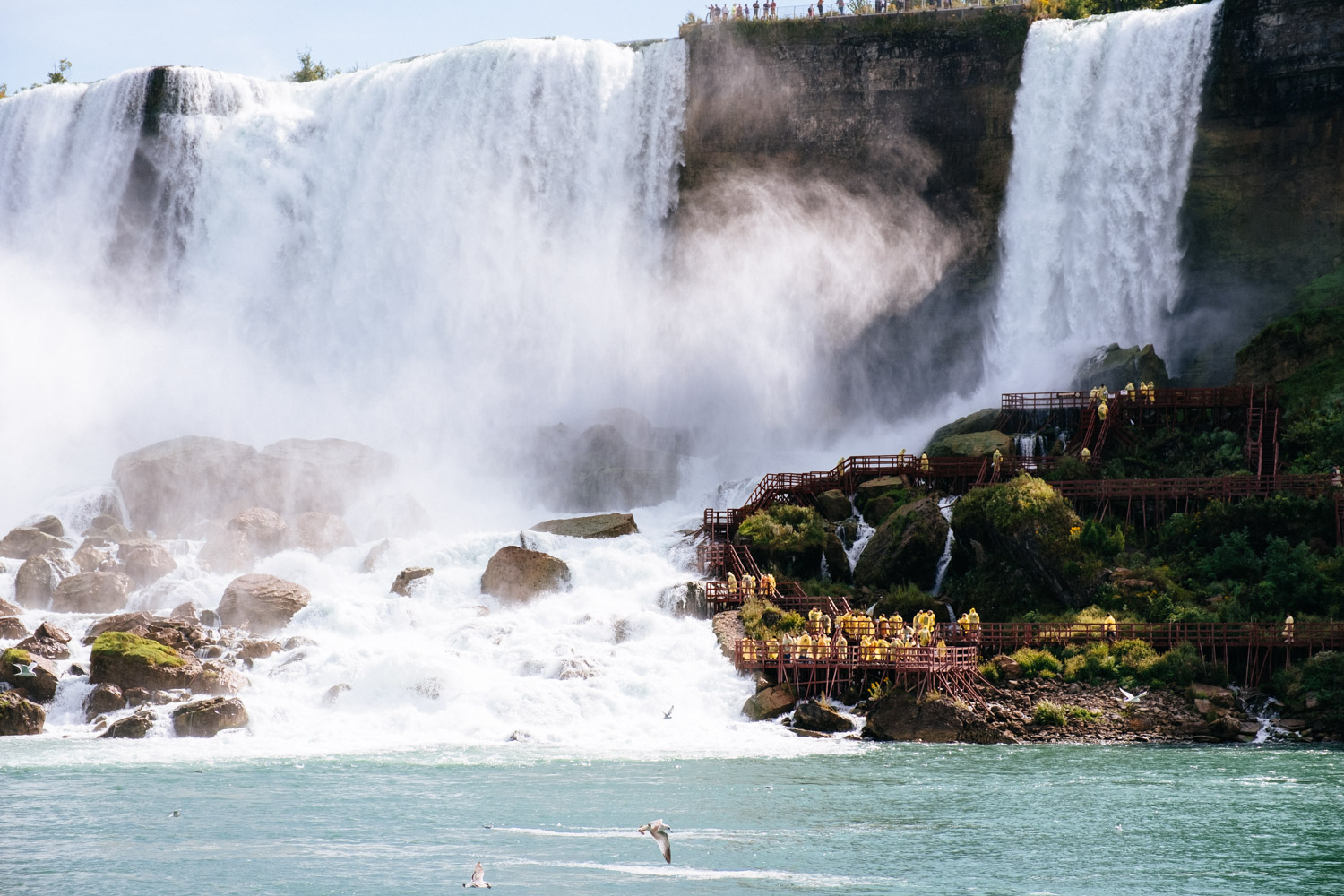 The inside a car wash experience probably lasted only a minute or two as this is not a long boat trip at all. It was still a real test regarding the weather resistance of the Fuji X-H1 and the XF 16-55/2.8 WR. But what about a very heavy monsoon rain? Would the weather sealing be good enough to deal with that? Well in that case I would still prefer to be under an umbrella but I wouldn’t shoot in such a massive rain with an unprotected Nikon D6 either. It just doesn’t make sense. My conclusion is that I would use the Fuji X-H1 in all conditions where I used to shoot with my professional Nikon DSLRs many years back.

Of course in such extreme conditions the lens should be WR too and a zoom lens because there is no way to change the lens without getting water into the camera and on the sensor.

Right after the boat trip I tried to walk up the trail beside the American Waterfall but I didn’t get far. There was just too much water. I was completely soaked and there was no way to take any meaningful pictures because of all the mist. So I returned to my wife and we took the elevator back to the viewing platform. 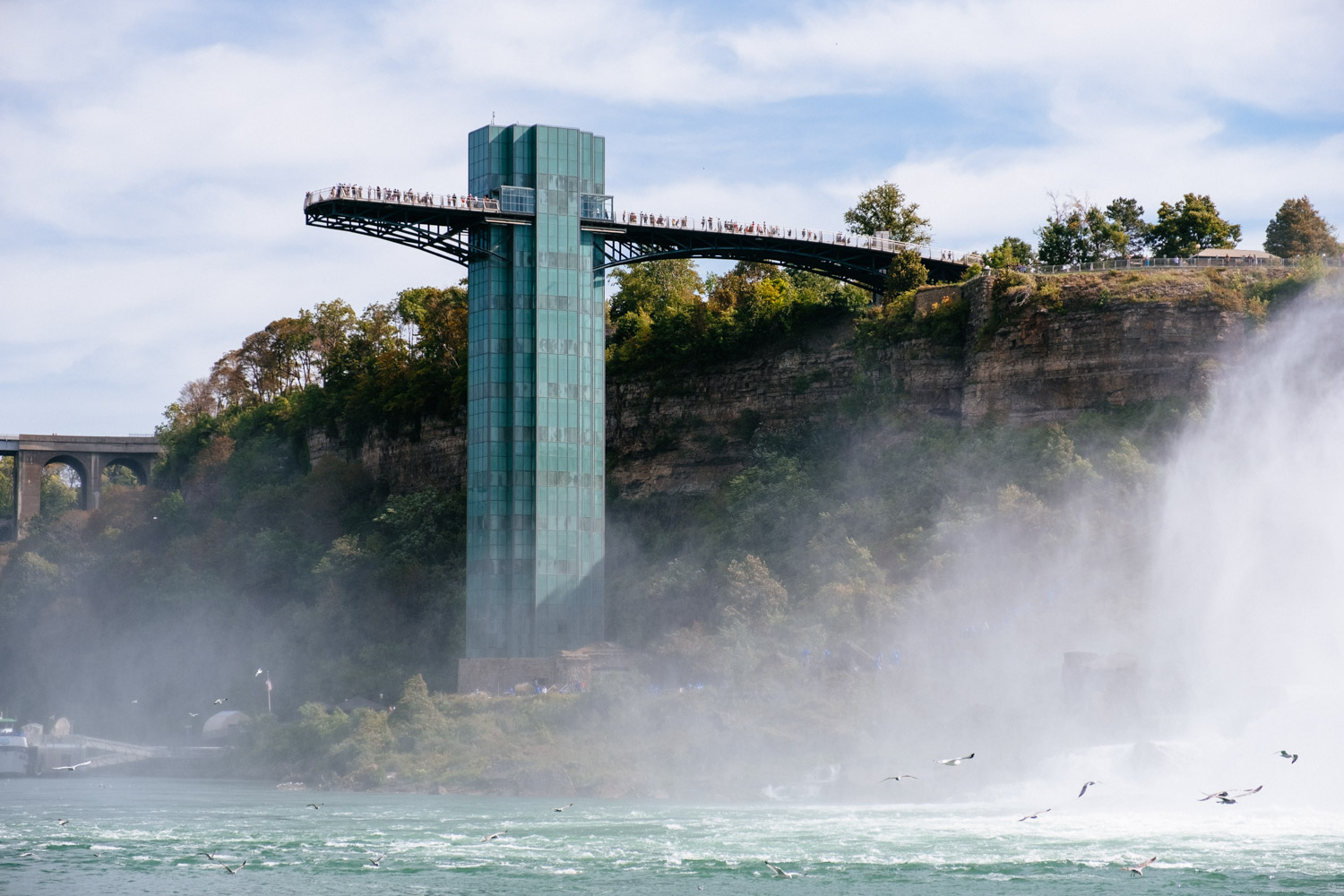 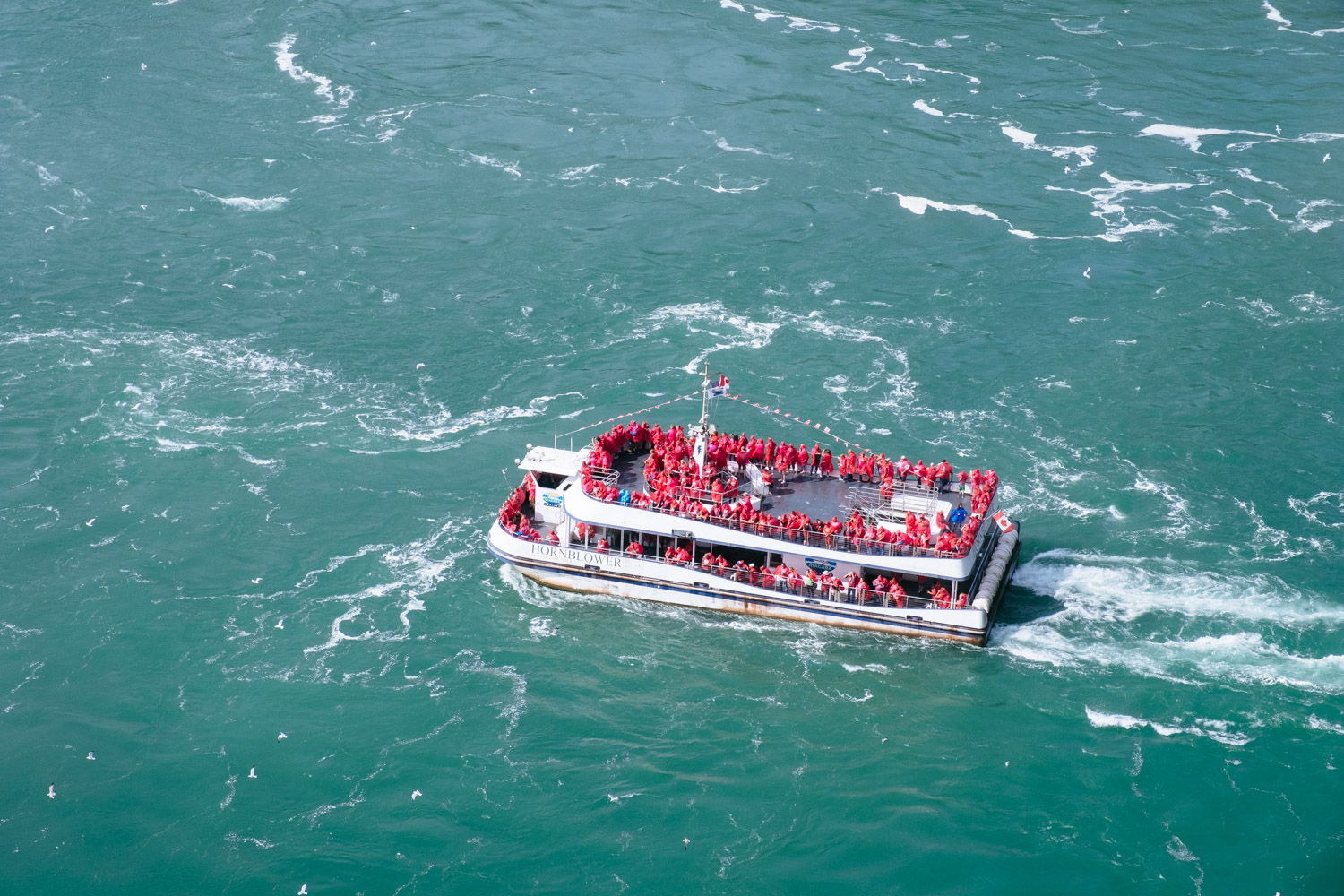 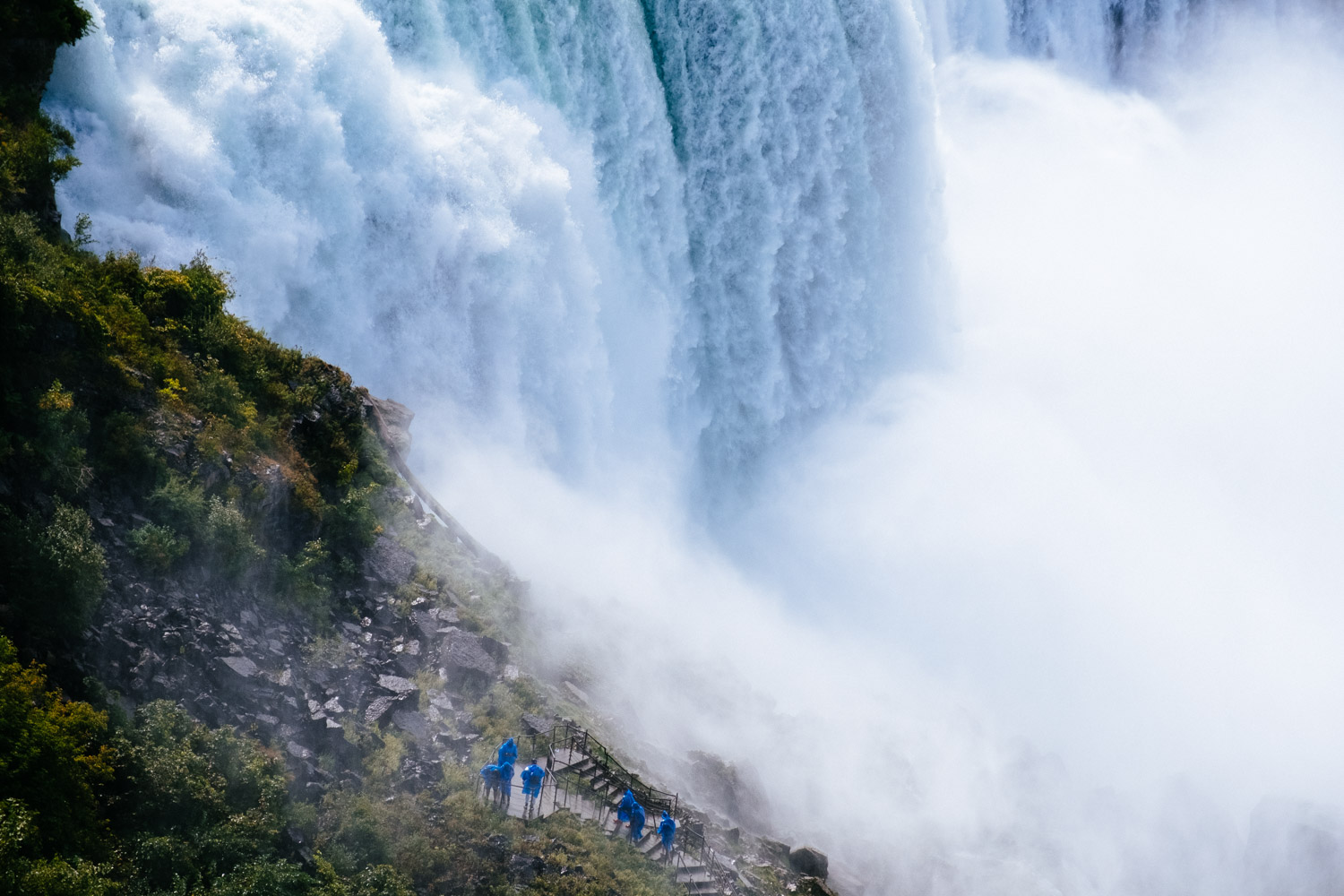 In the image above you can see the brave people who made it up to the end of the trail. I always like to include people in waterfall shots to provide some scale for the viewer.

I also increased the ISO to ISO 800 to get super short shutter speeds. With powerful waterfalls a shutter speed of 1/4000s or even 1/8000s looks best because it freezes all water droplets. A shutter speed of 1/1000s can’t do that, as a consequence you get some blur and the water looks less explosive. And on most shots I dialled in a 1 stop exposure compensation to avoid underexposure. 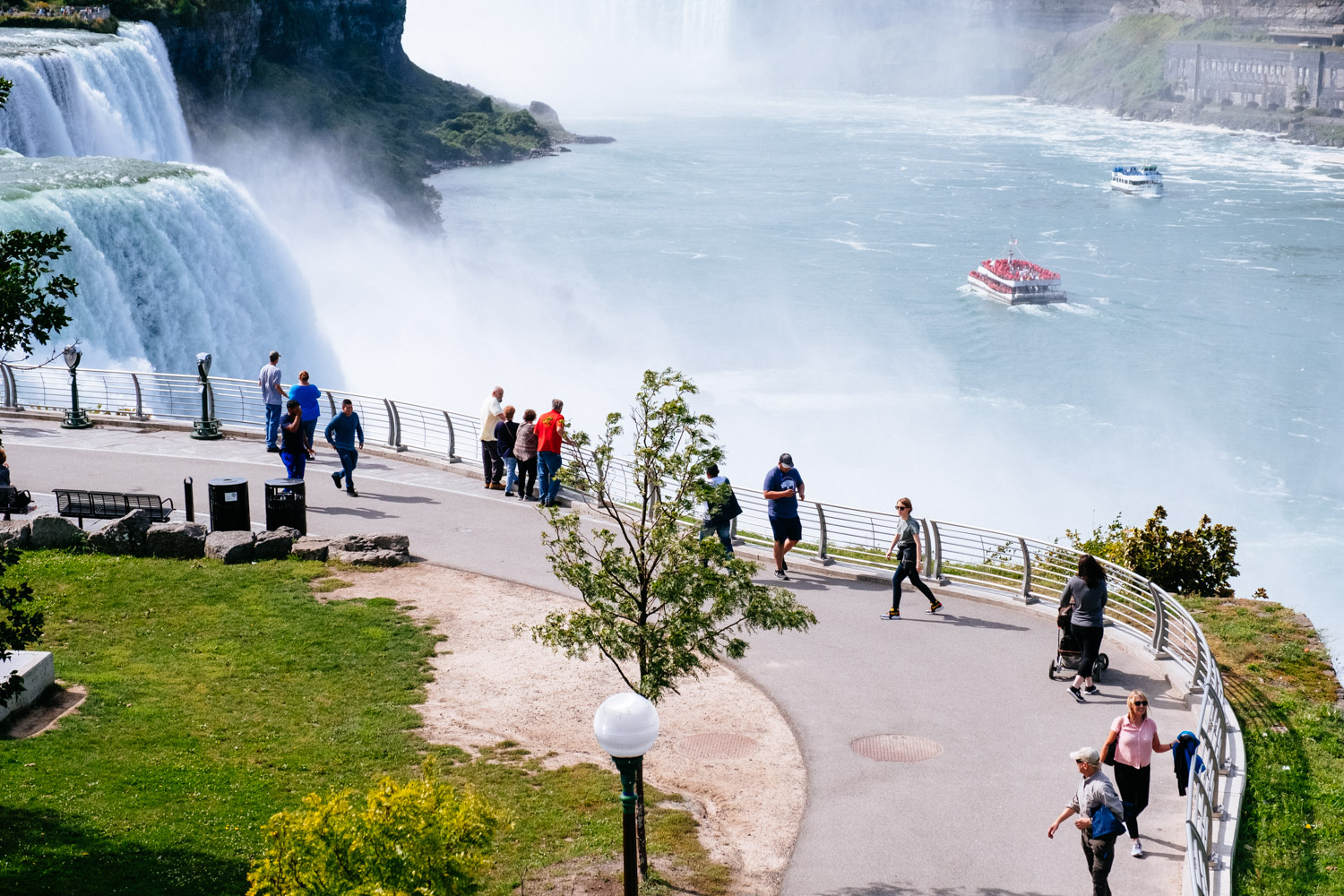 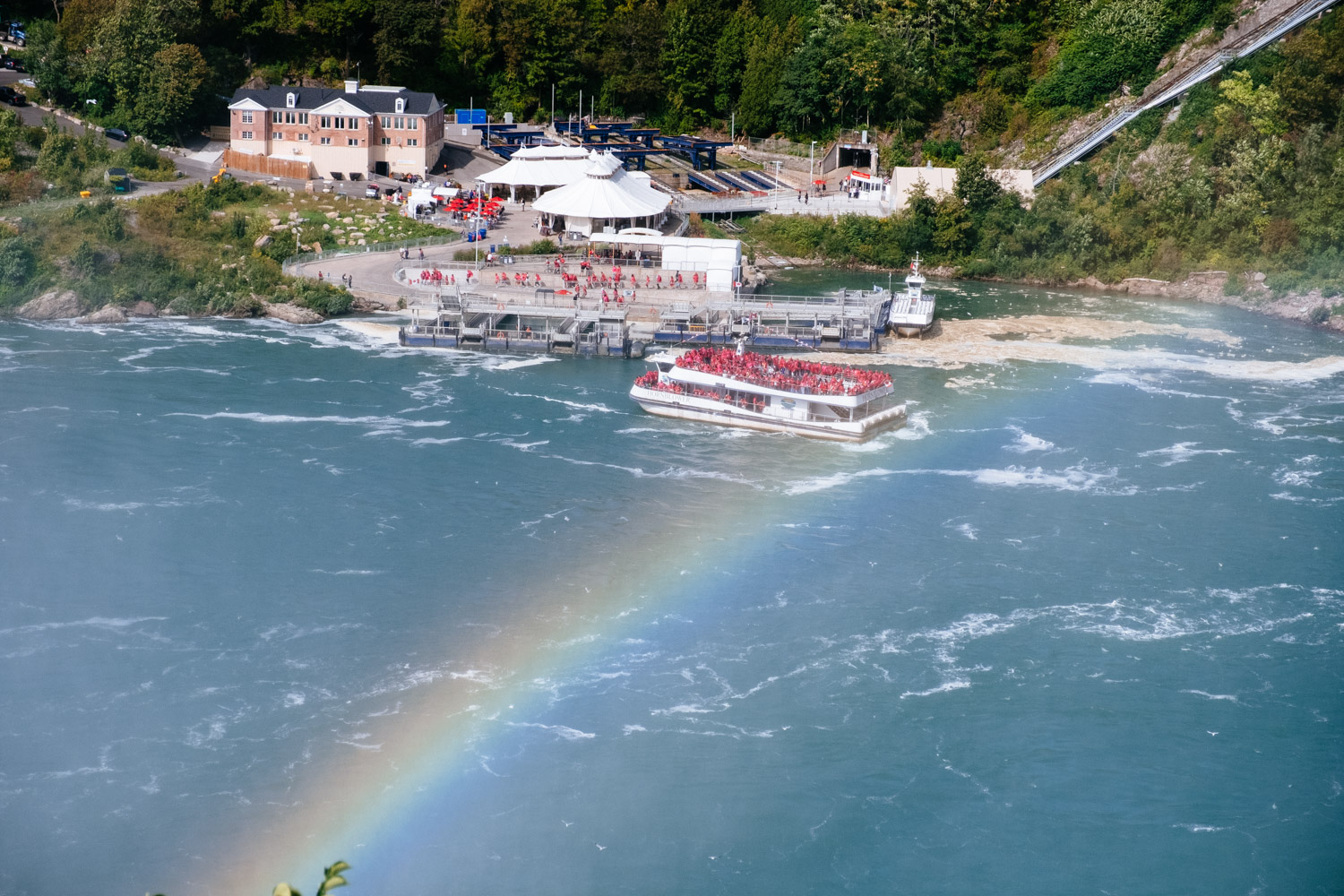 Before we left I took a couple more shots from the viewpoint closest to the waters edge. I was glad that there is a massive fence because in such places I sometimes don’t trust myself. Don’t get me wrong: I’m not suicidal but somehow such an abyss always attracts me somehow.

Time to move on. 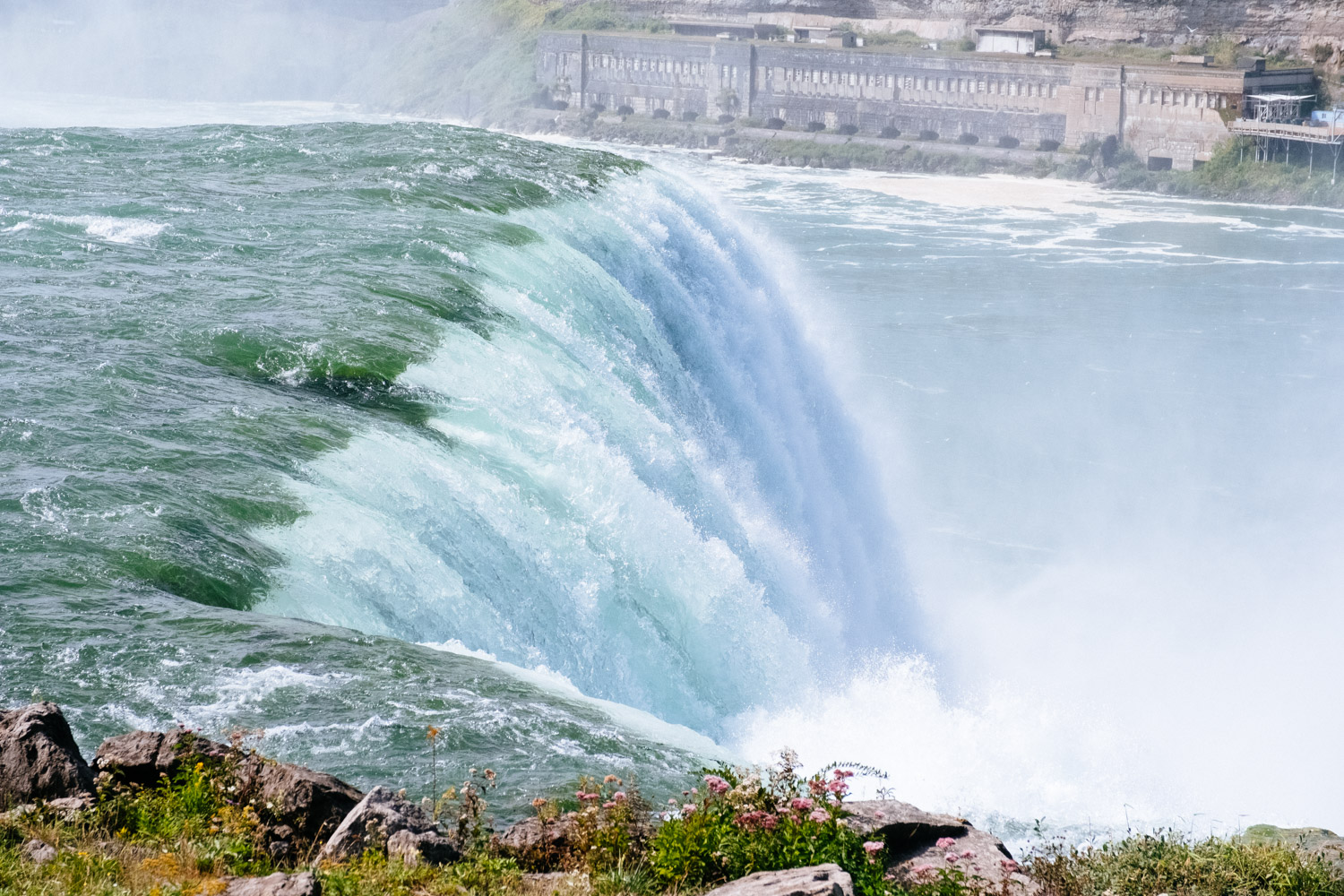