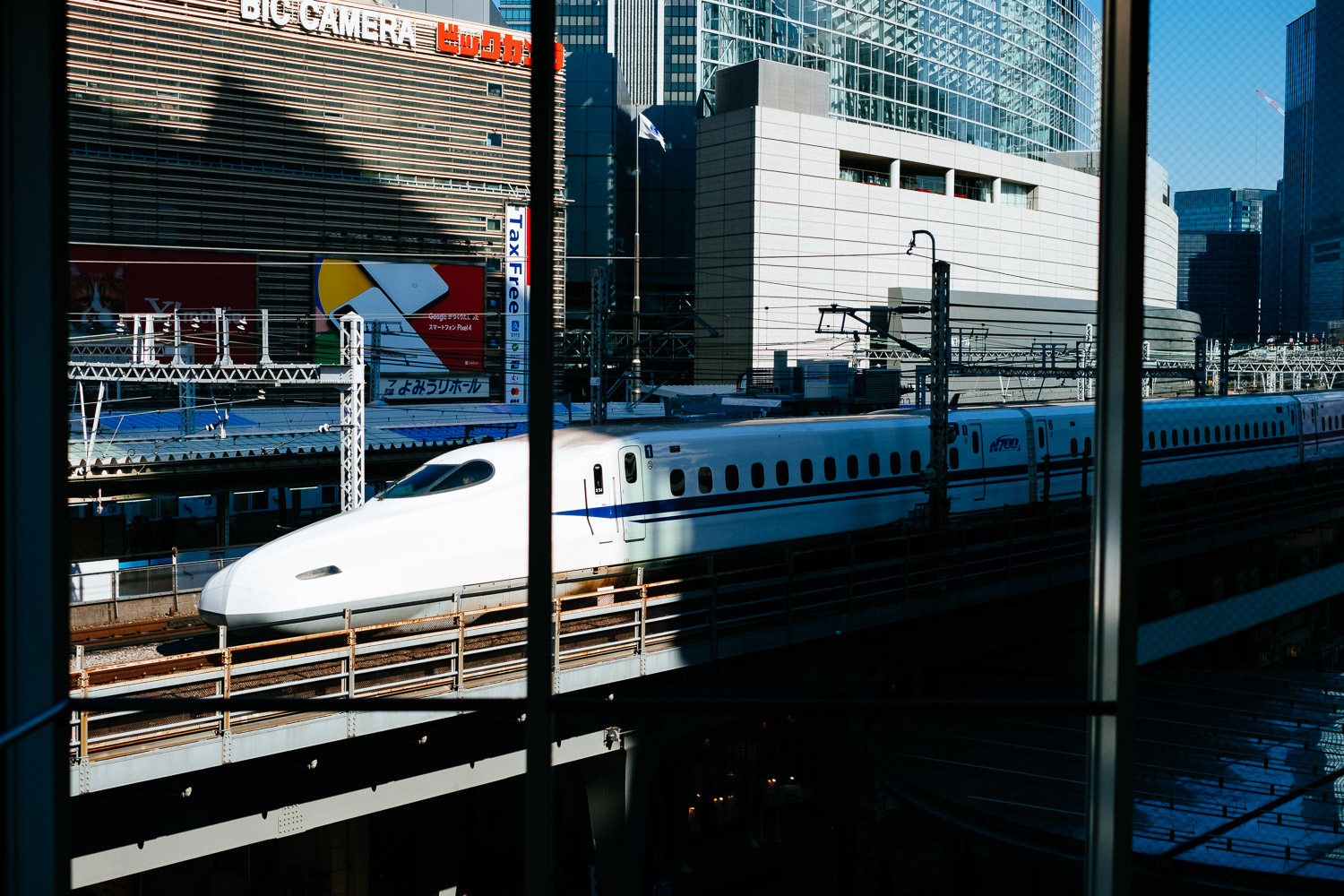 I just returned from Japan. My seventh trip. I still discover something new every time I go there.

This time it was so cold that I bought a cheap down jacket and a hat at Uniqlo on the first day. It was cold and windy but sunny. Far better weather compared to my last trip. And because of the Corona virus there were much less tourists in Japan especially from China of course. Chinese citizens were already banned on my flight to Japan.

Very nice weather and less tourists so I gave Senso-ji, the oldest temple in Tokyo and one of the most touristic spots, another try. I was not the only one. If you are after solitude go somewhere else. But if you don’t want to have people around you you should not go to the biggest city in the world in the first place. 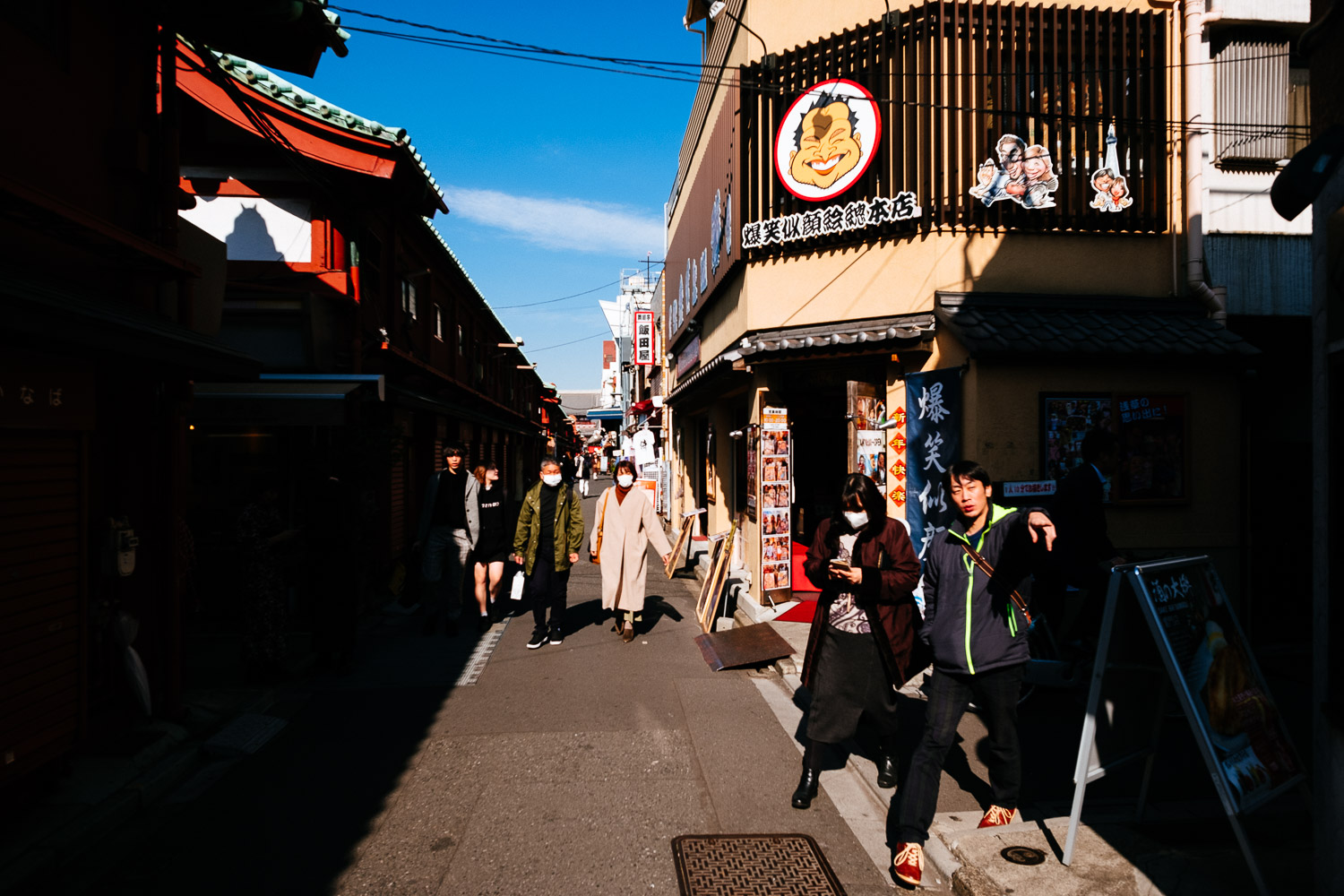 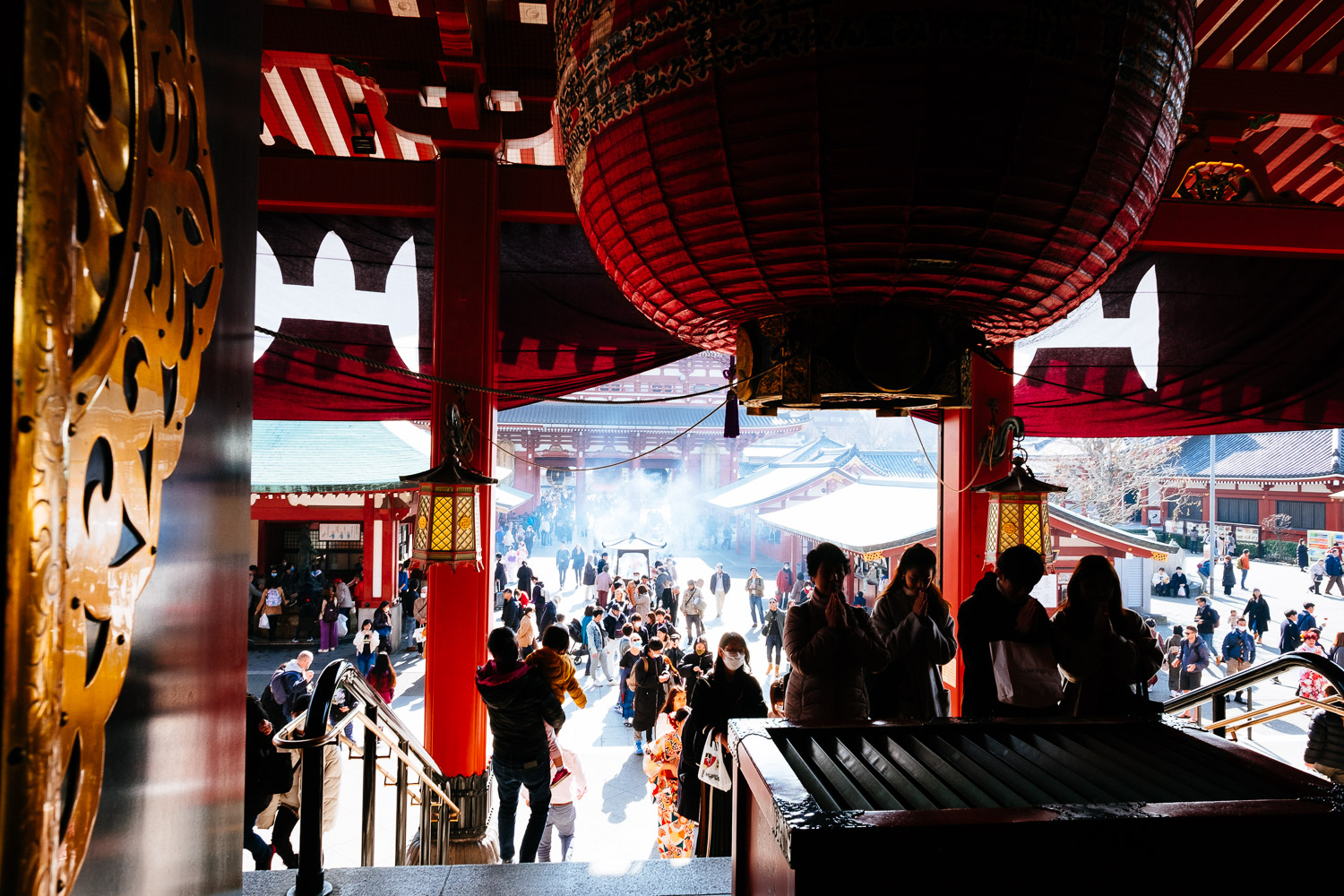 The temple was busy but not as bad as during my last visit. I find out that I like the place because of all the people. Some are dressed up in colourful costumes. I didn’t use the word kimono because some don’t look very traditional. There are kimono rental shops close to the temple because apparently it is a big thing to get a picture of yourself dressed up in front of the temple. A very nice photo opportunity especially if you like to take pictures of people who take pictures of each other.

Fake kimono or not the young ladies still look very nice. More about Senso-Ji in one of my next blog posts and here. 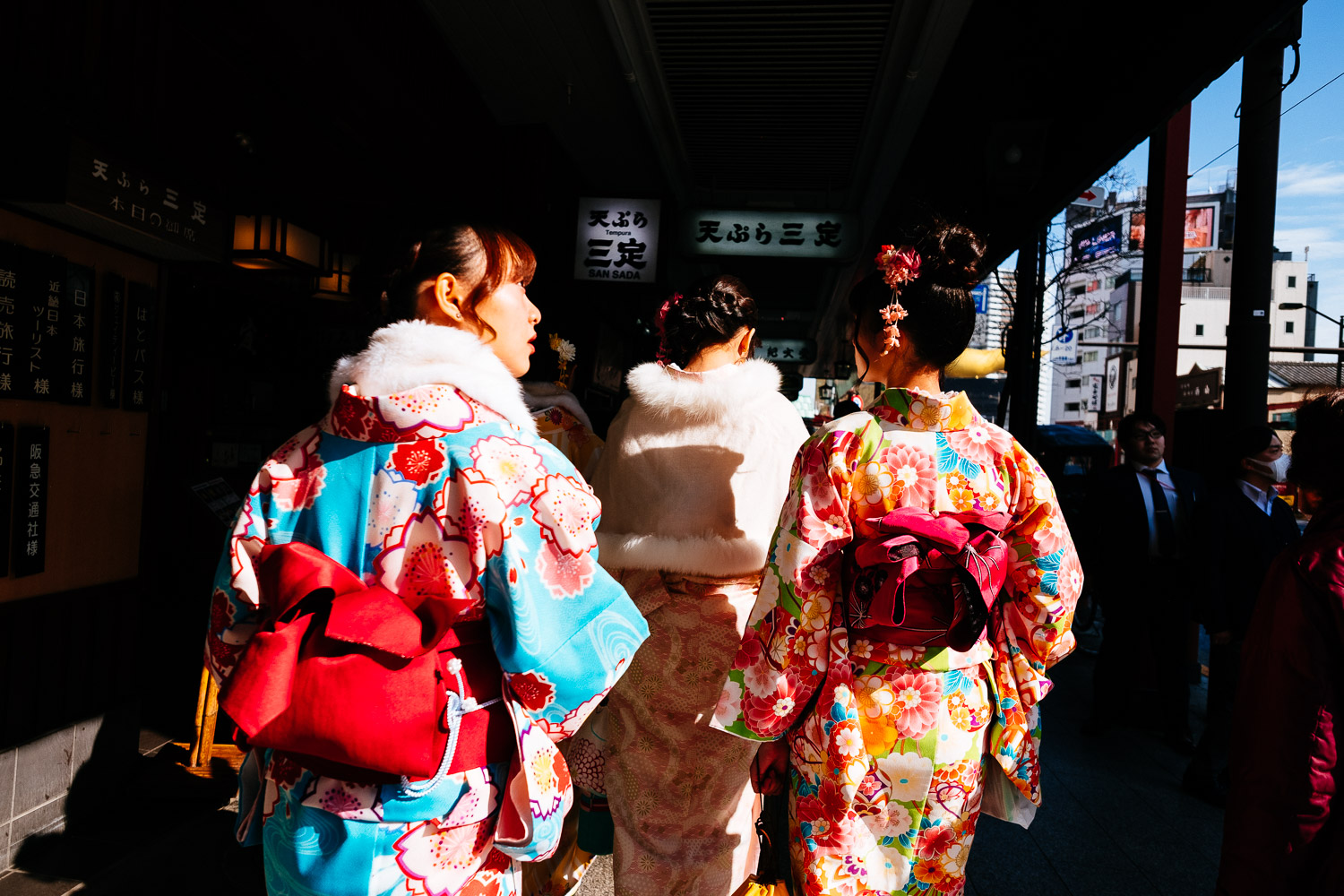 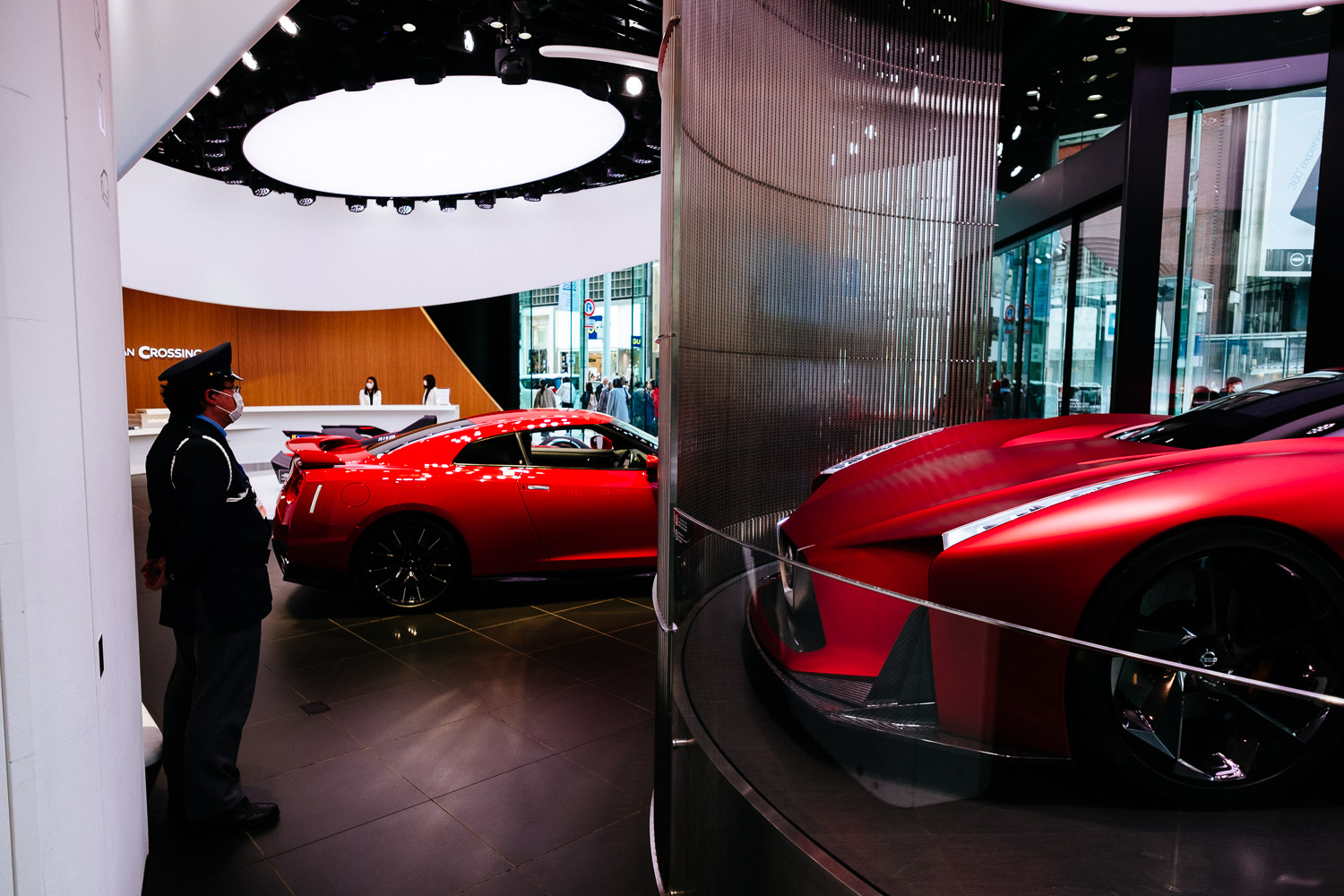 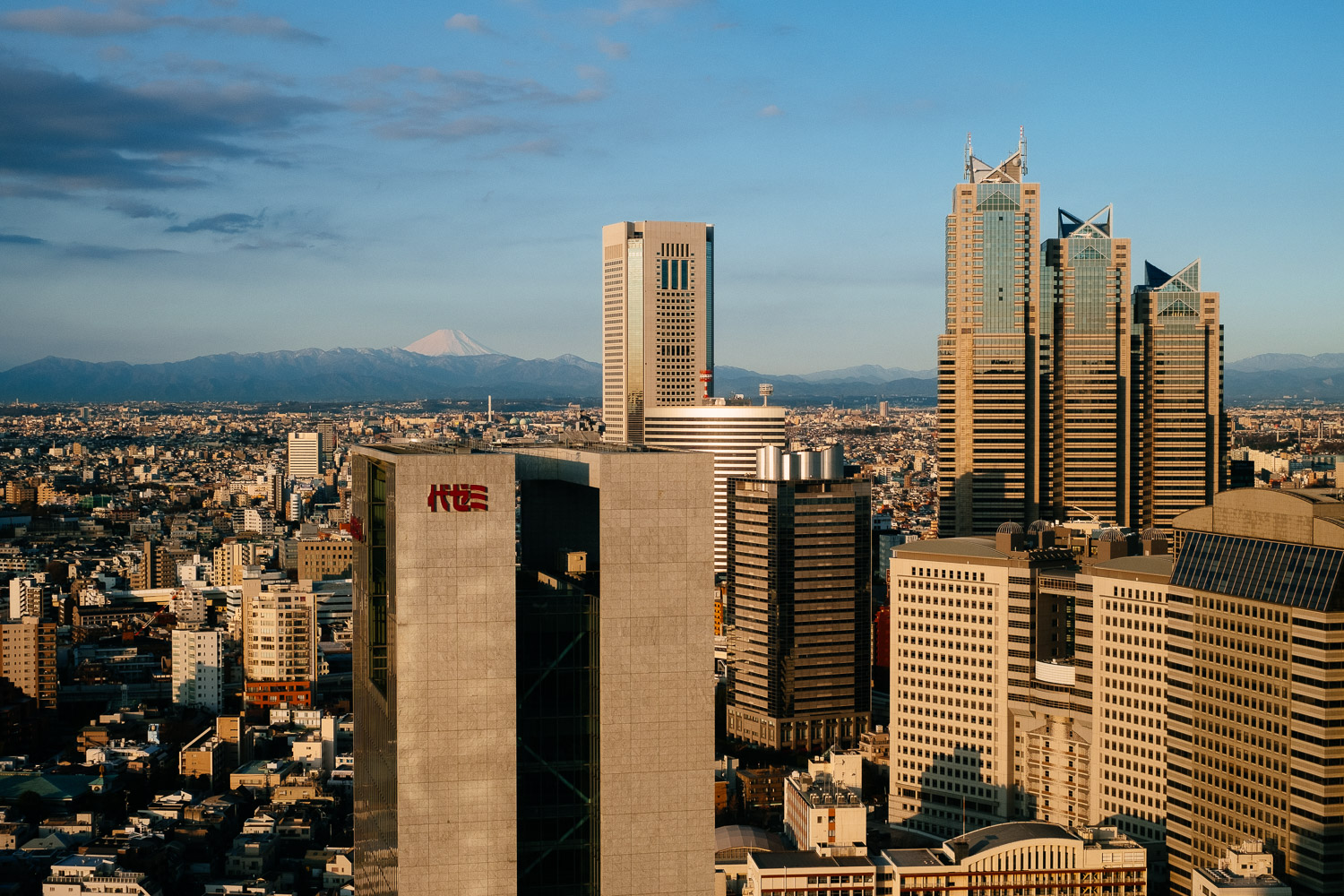 On a short walk through Ginza I saw the coolest car in the world and it was a Nissan! More about that one soon. And on the next morning I saw Mt. Fuji for the very first time! From my hotel room in Tokyo! This is my seventh trip to Japan and the first time I saw the mountain. I never had the luck to see it from the train. It was either already dark or cloudy when I passed it. I made already fun of it and said that I doubt that the mountain exists and now here it is. In the far distance but clearly visible on the horizon. Here is one taken from the train two days later: 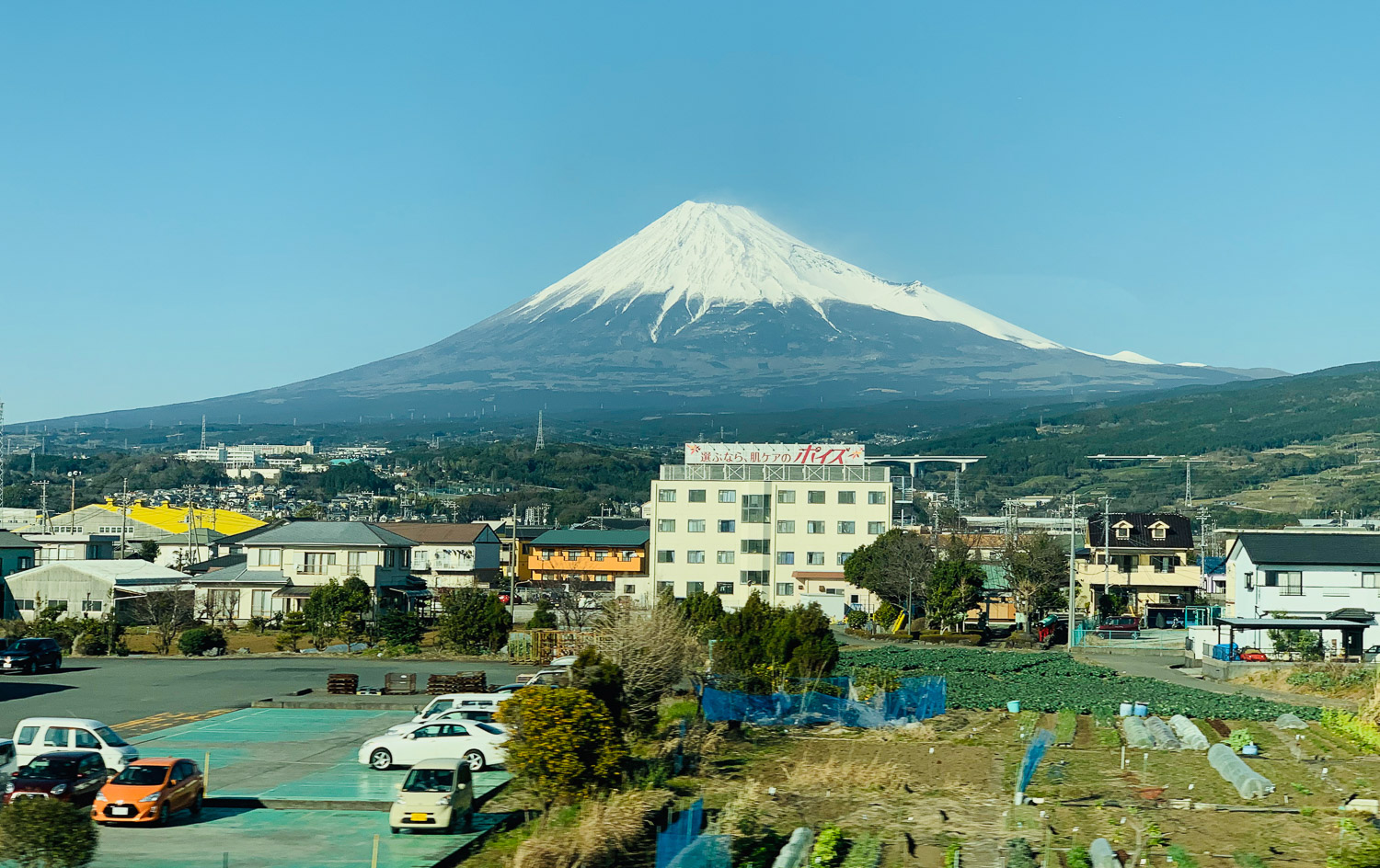 I was lucky that I got a hotel room on the side that faces Mt. Fuji and that my room was in the 34th floor. Two days later I was back in the same hotel. My room was on the Fuji side again but this time only on the 25th floor. So the building in the middle of the picture blocked the view.

Btw: The three towers on the right are the Park Hyatt in Tokyo. The famous hotel from “Lost in Translation”. One of my favourite movies. 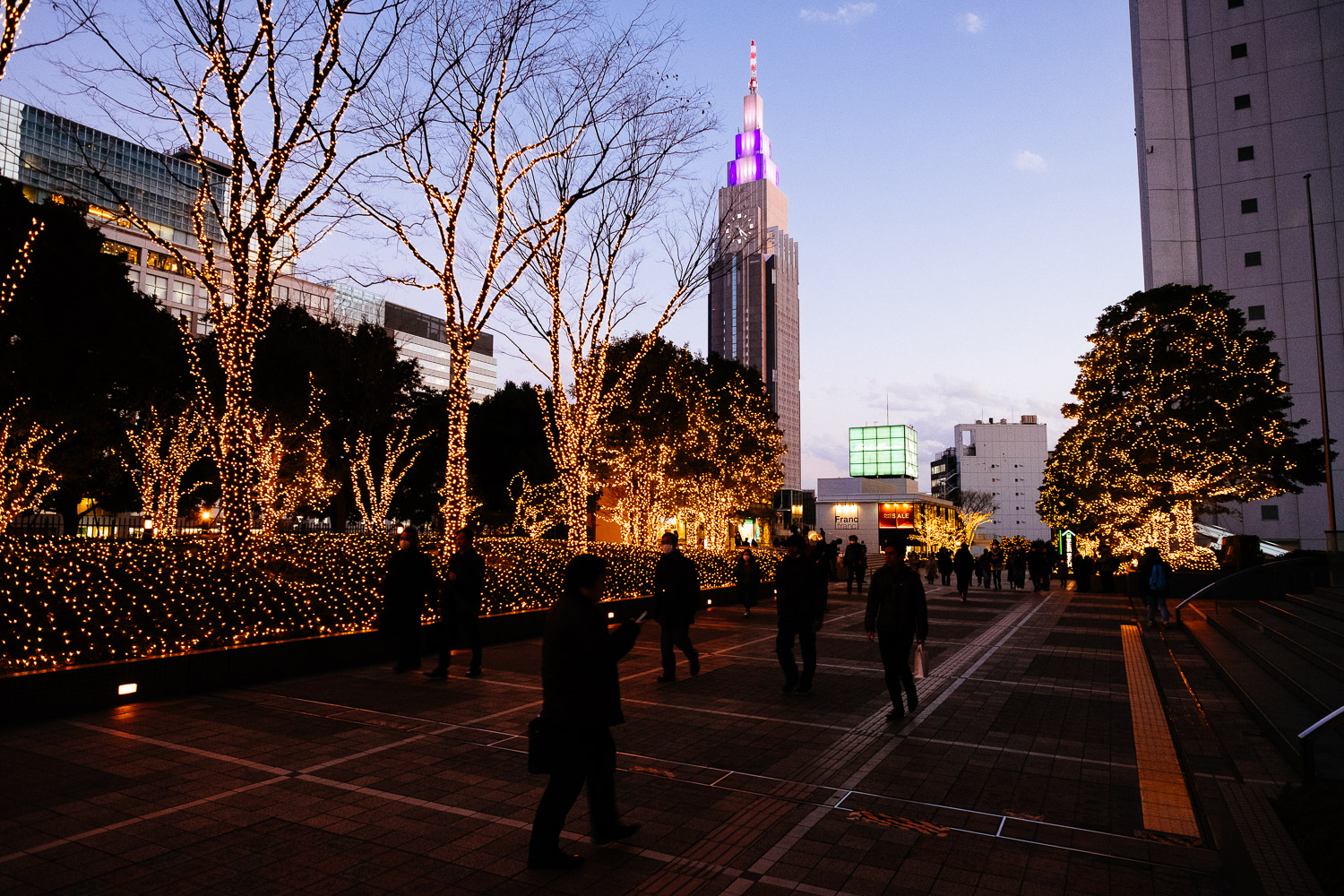 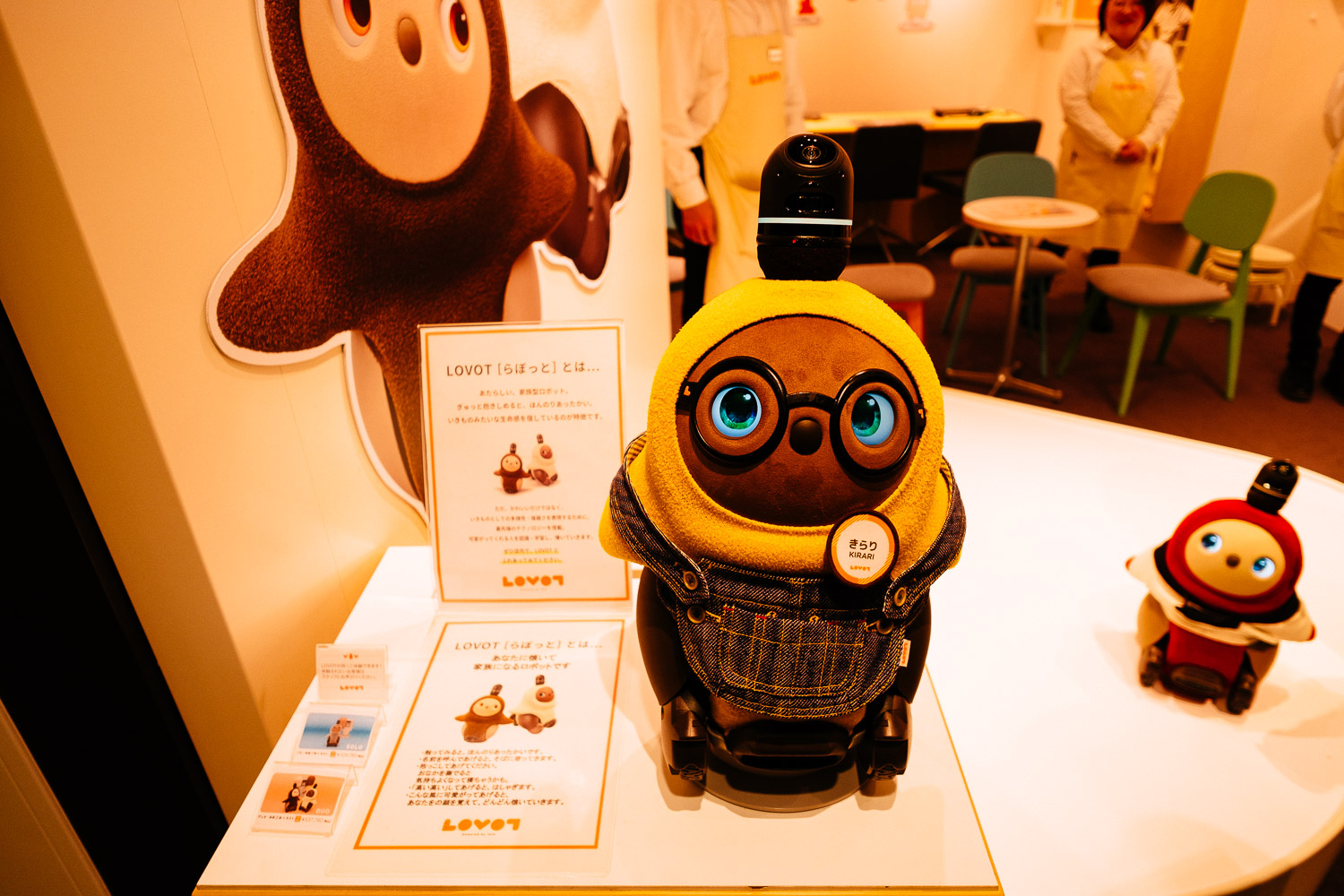 But my hotel is very nice too and it is perfectly located just next to the busiest train station in the world. Shinjuku station. 4 million passengers are changing trains here every day. According to Wikipedia during rush hour 500 people get on or off a train every single second!

And there are those big department stores right opposite of my hotel where I bought my down jacket and where I also saw this little fellow in the image above. A lovot: love + robot. I little robot purely designed for fun. Running around your house just like a Roomba but with no other purpose than to give you company. Cute and very sad at the same time. It sells around 2.800.-USD in case you are interested.

Finally to my main discovery of this trip. I travel with the Shinkansen or more precisely with the Nozomi Express on ever trip. Tokyo to Osaka in less than 2 hours 22 for 515 km (320 miles). Try to beat that with your car! And how often do you think this amazing train will go in between those two cities per day. Three to four times? Not even close! This thing runs every 7 to 8 minutes! So naturally Japan should be a good place for train spotting and one of the best places for train spotters is the Yurakucho station in Tokyo.

What makes the place special is that the Shinkansen passes by the skyscrapers of Tokyo and the fact that the train already is rather slow because it is about to enter or leaving Tokyo station. If you still miss it don’t be sad. The next one is coming within 3 to 4 minutes. Another nice feature of the Shinkansen is that its back looks exactly like its front. So you got two opportunities per train to get the shot.

My seventh trip to Japan but I can’t say that it is growing on me. I loved Japan straight away. 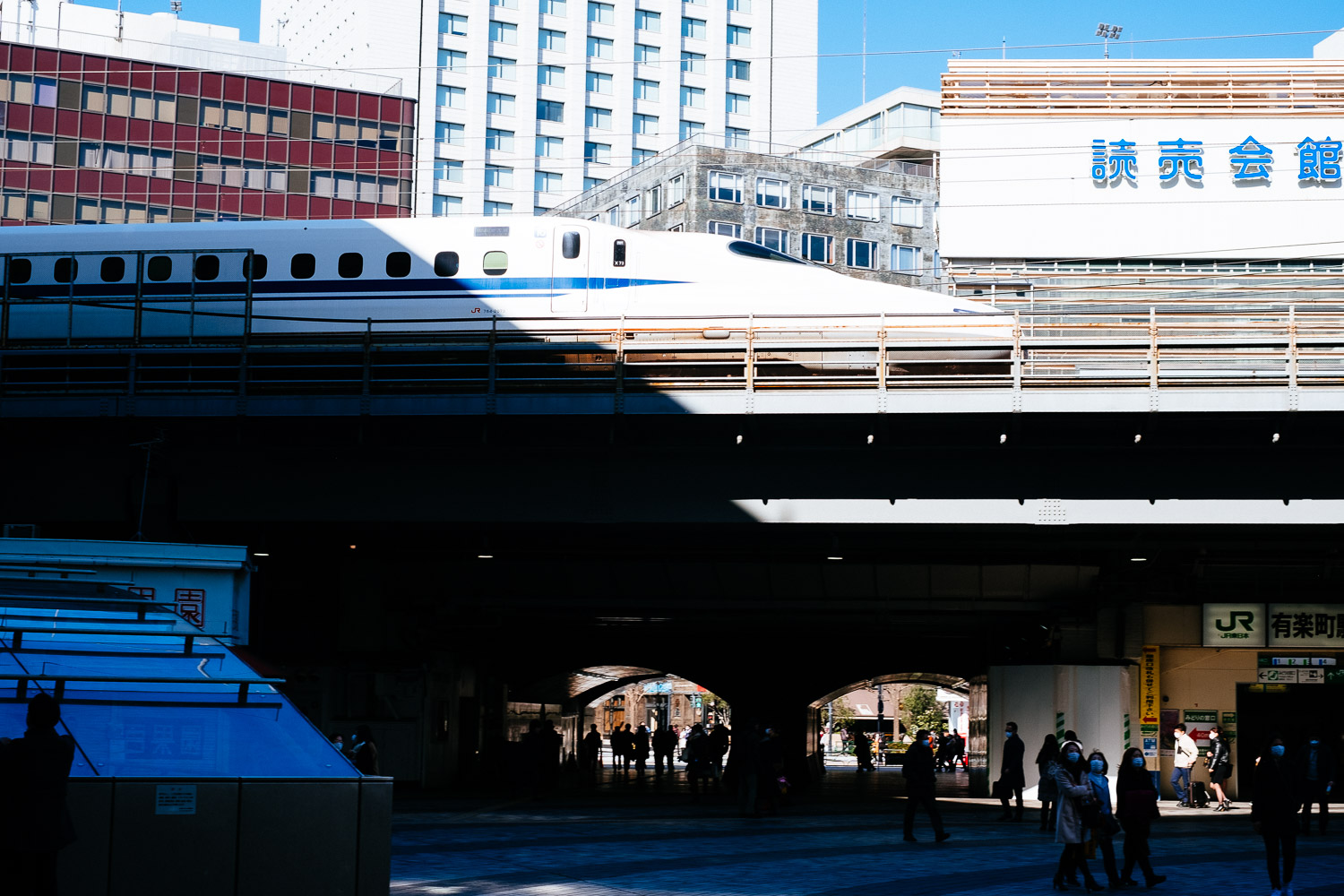