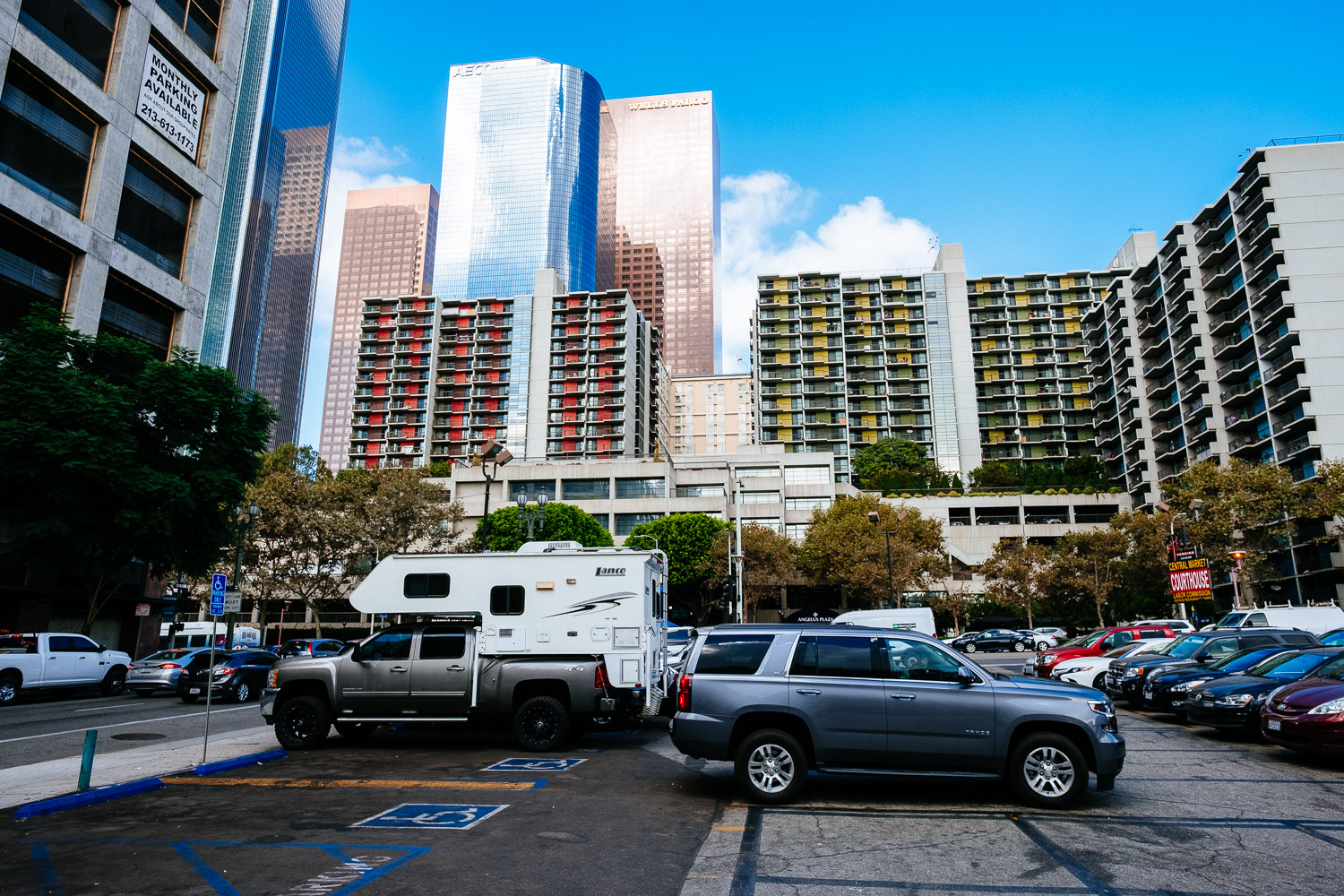 LA is the city of cars so of course we drove from one sight to the other with our compact rental car. In the image above next to the camper.

Initially I was worried to find a cheap place to park the car but of course there is no need to worry here. A protected car park in the centre. I still worried a little to leave my camera rucksack with all the lenses in the car but there is no way that I would take everything with me for a walk.

I just took my little shoulder camera bag with the X-Pro2 plus 14, 23/2 and 35/1.4. Initially we came to only visit the Bradbury Building. One of the oldest buildings in the centre of Los Angeles. Scenes of Bladerunner and Chinatown were filmed here.

Fun fact: I’m writing this more than one year after we visited the place. I couldn’t remember the name so I started to google for old skyscraper, old building, … Until I remembered that I also took some images with my new iPhone Xs. There is no way to deny that smartphones have some serious advantages. Just take a picture and you got the location. I wish my Fuji would have GPS inside. 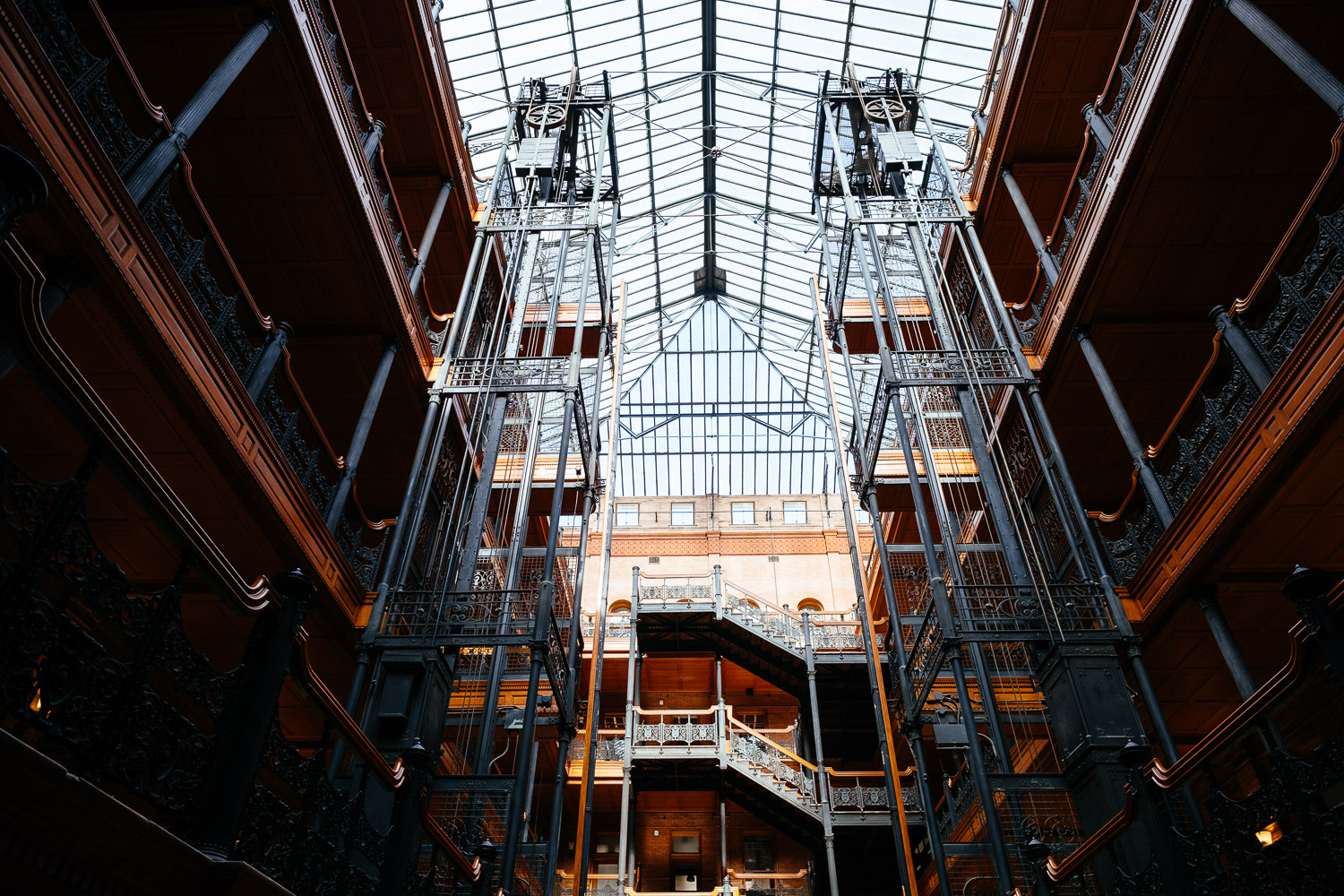 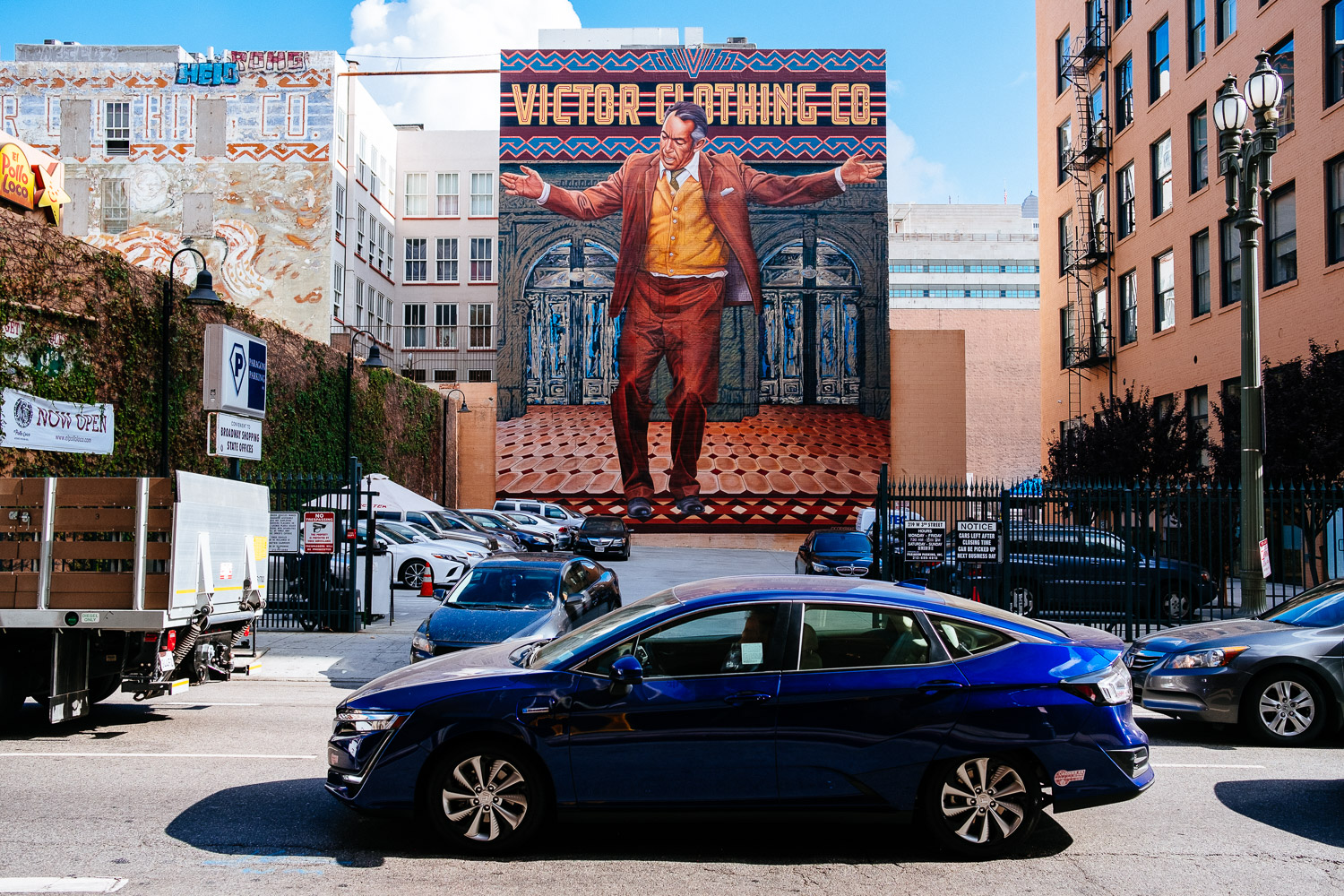 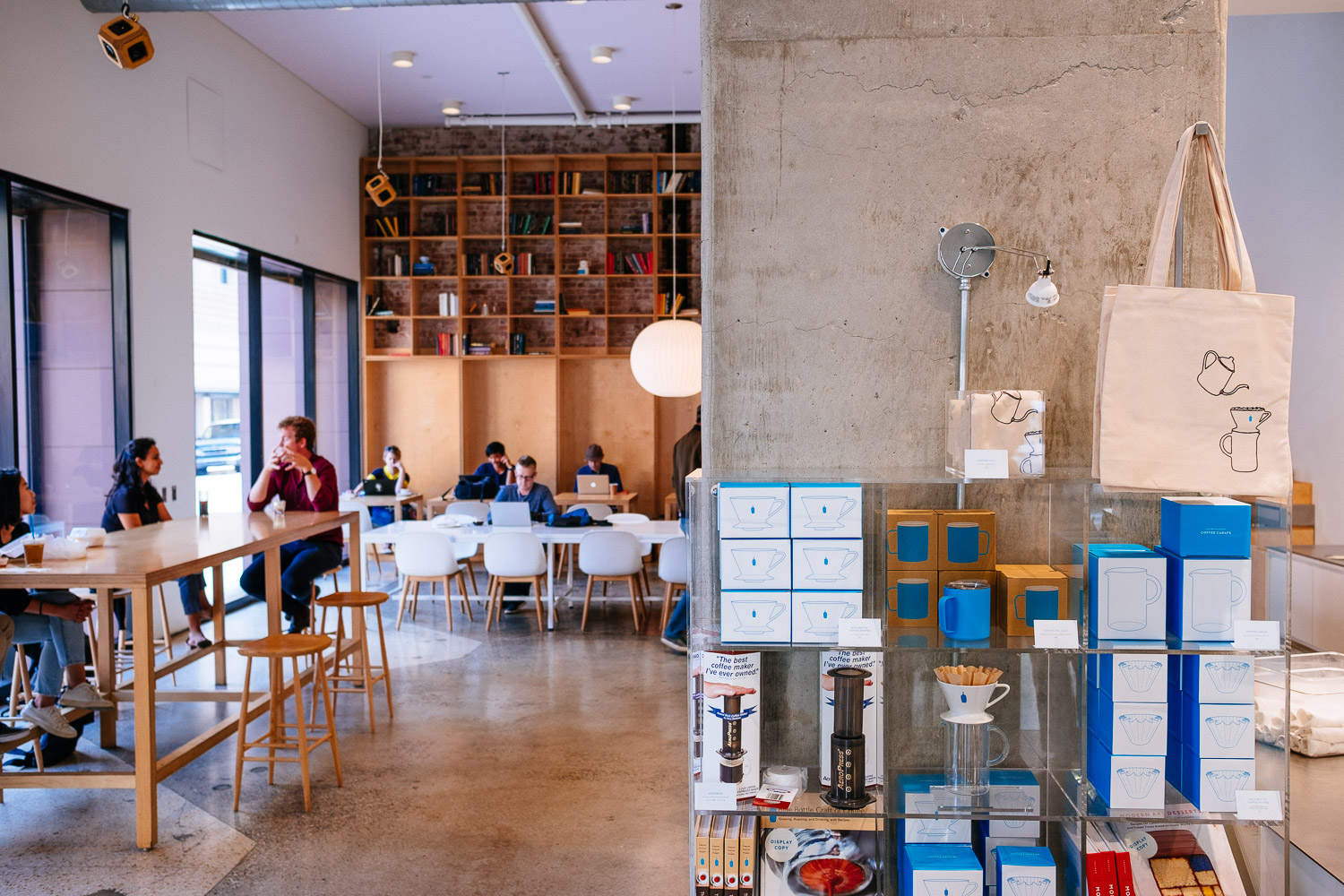 Downtown LA can look intimidating at the wrong time of the day. I remember when we passed it three weeks ago when we started our trip. Thanks to our jet lag it was early in the morning and the streets were empty. I wrote about it here some time ago: Leaving LA.

Three weeks later at the very same place we drank Espresso in a hip coffee shop and decided that this place is as safe as our backyard. Gentrification obviously has started already. Where will all the people go when the money moves in?

I guess it is easy to earn a poor reputation but it is though to get rid of it. Downtown LA, Detroit, … and many others are not as bad as their image. Go there and experience it yourself. One last thing: don’t get shot! 😉 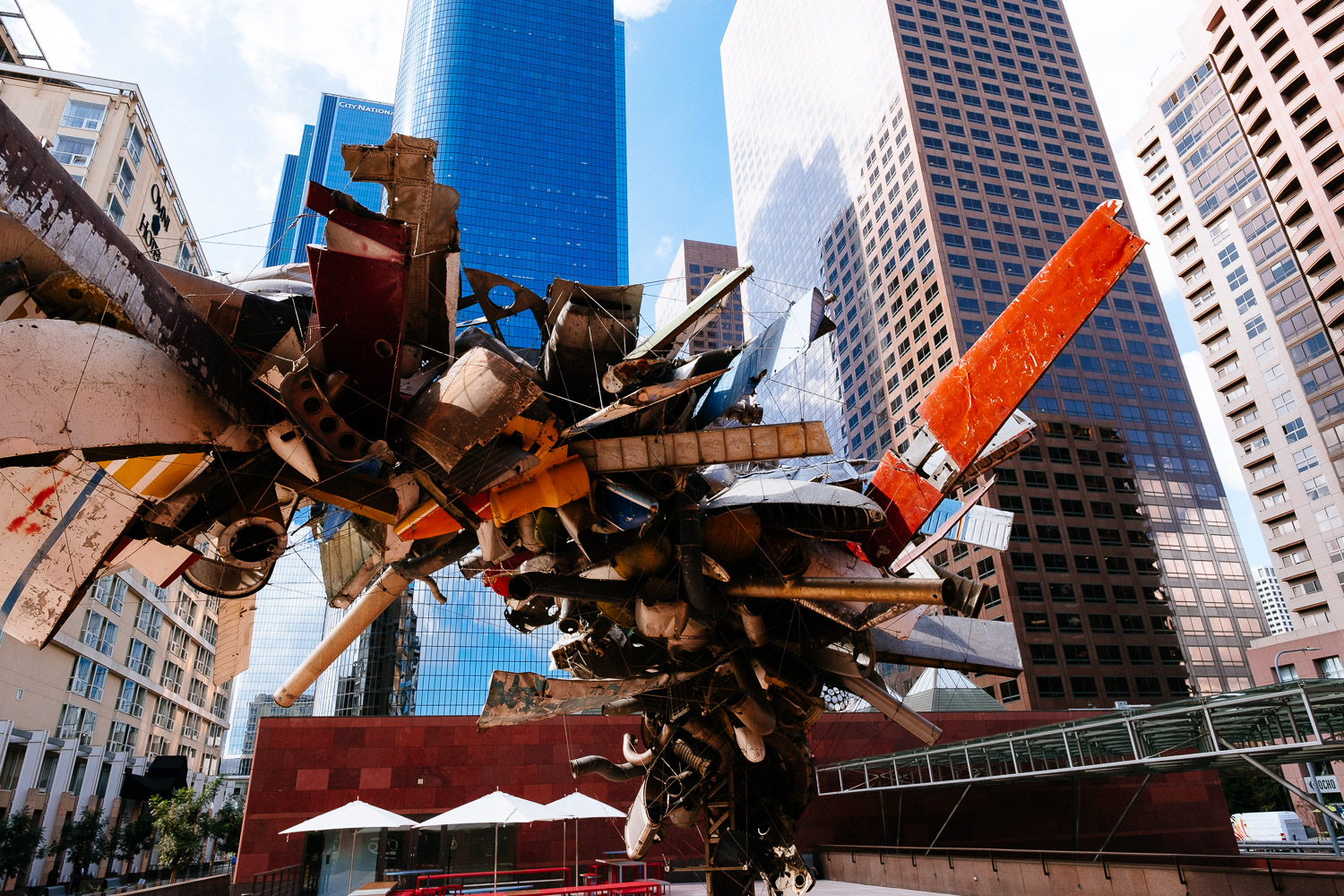 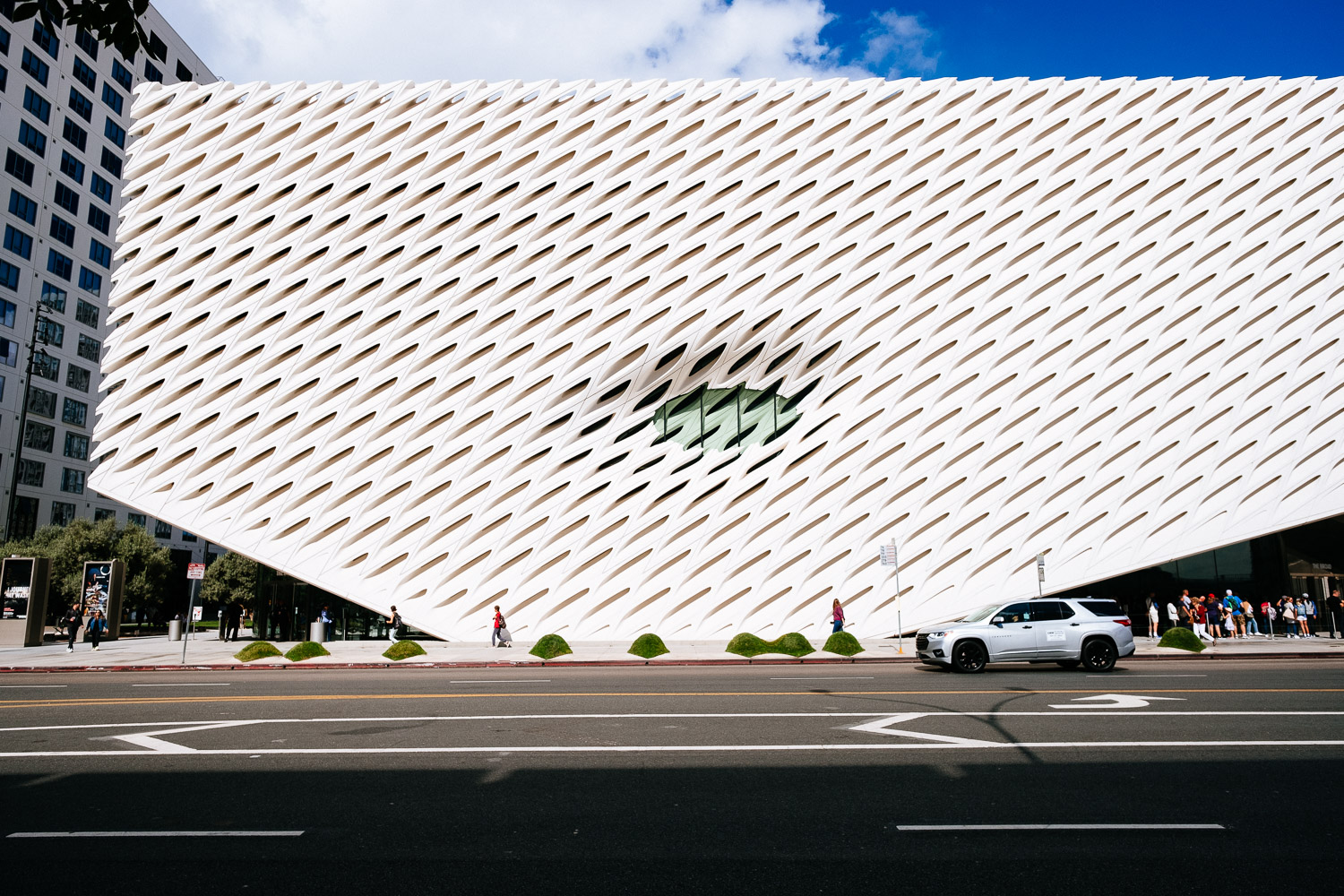 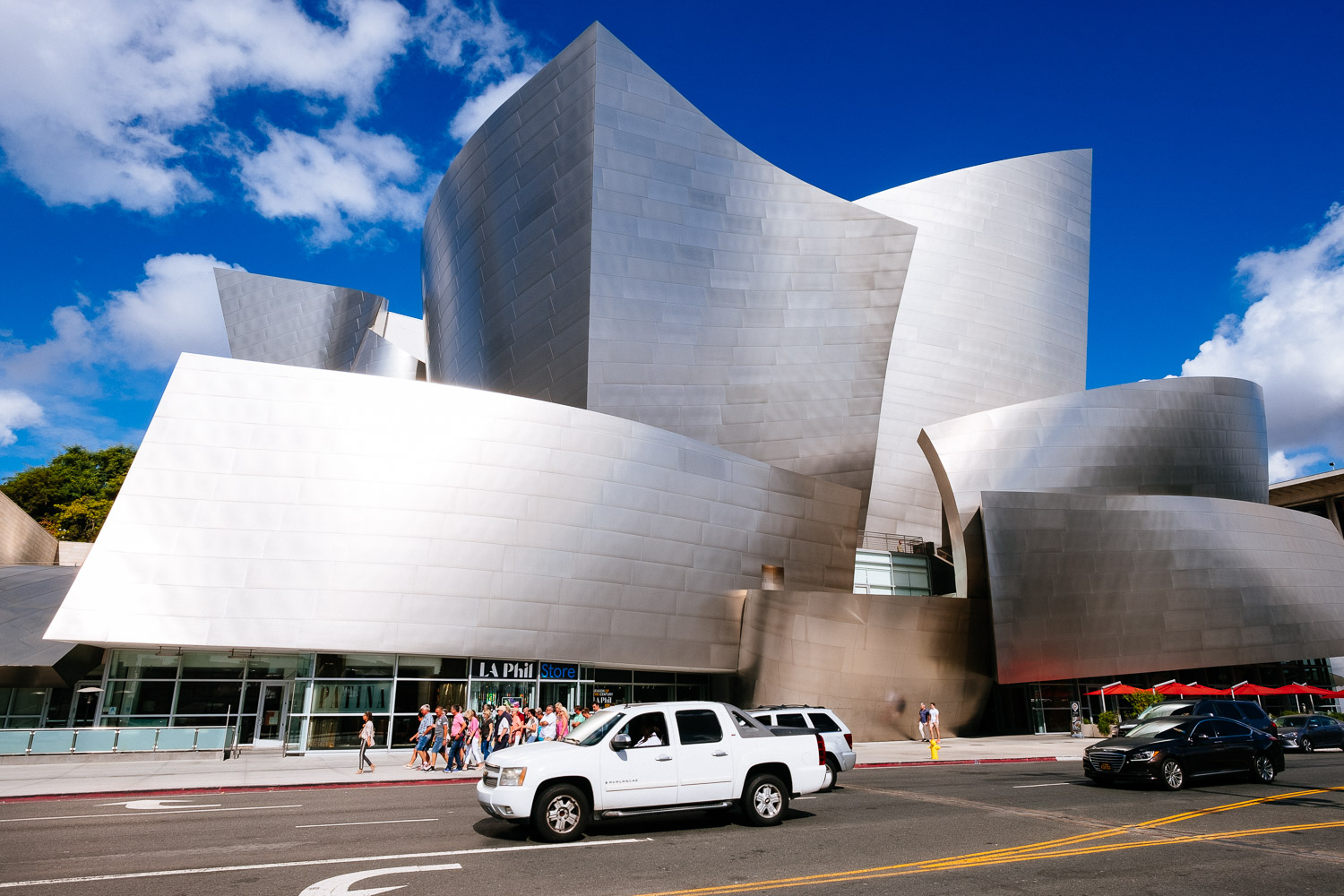 During this vacation I shot most images with the Fuji XF 16-55/2.8 WR for two reasons. First: It’s super convenient. The lens covers everything from wide angle to mild telephoto. There is no need to change the lens every couple of minutes. There is no need to change the lens most of the time. But even more important is the second reason: the XF 16-55/2.8 WR is an excellent lens. There is no compromise when you shoot it compared to primes. It is that good. The 18-55 OIS is a good lens but there is a big difference in between good and excellent.

But for the last two days in Los Angeles I changed back to my “Asia” gear. Instead of the 16-55 I took the 14/2.8, the 23/2 and the 35/1.4 with me. Mainly because 16mm is not wide enough but also because I just like to have a small camera around my neck when I’m walking around all day. With the 16-55 on my X-Pro2 the camera becomes rather big and heavy and my shoulder bag feels like someone stole my other lenses. With the primes the camera is always compact and light and the other two lenses are in my small shoulder bag together with a bunch of spare batteries.

So for me it is a three prime bag in the cities and zooms to cover the landscapes. On hikes I also usually switch to my camera rucksack because it is more comfortable to carry around especially with the water bottles. 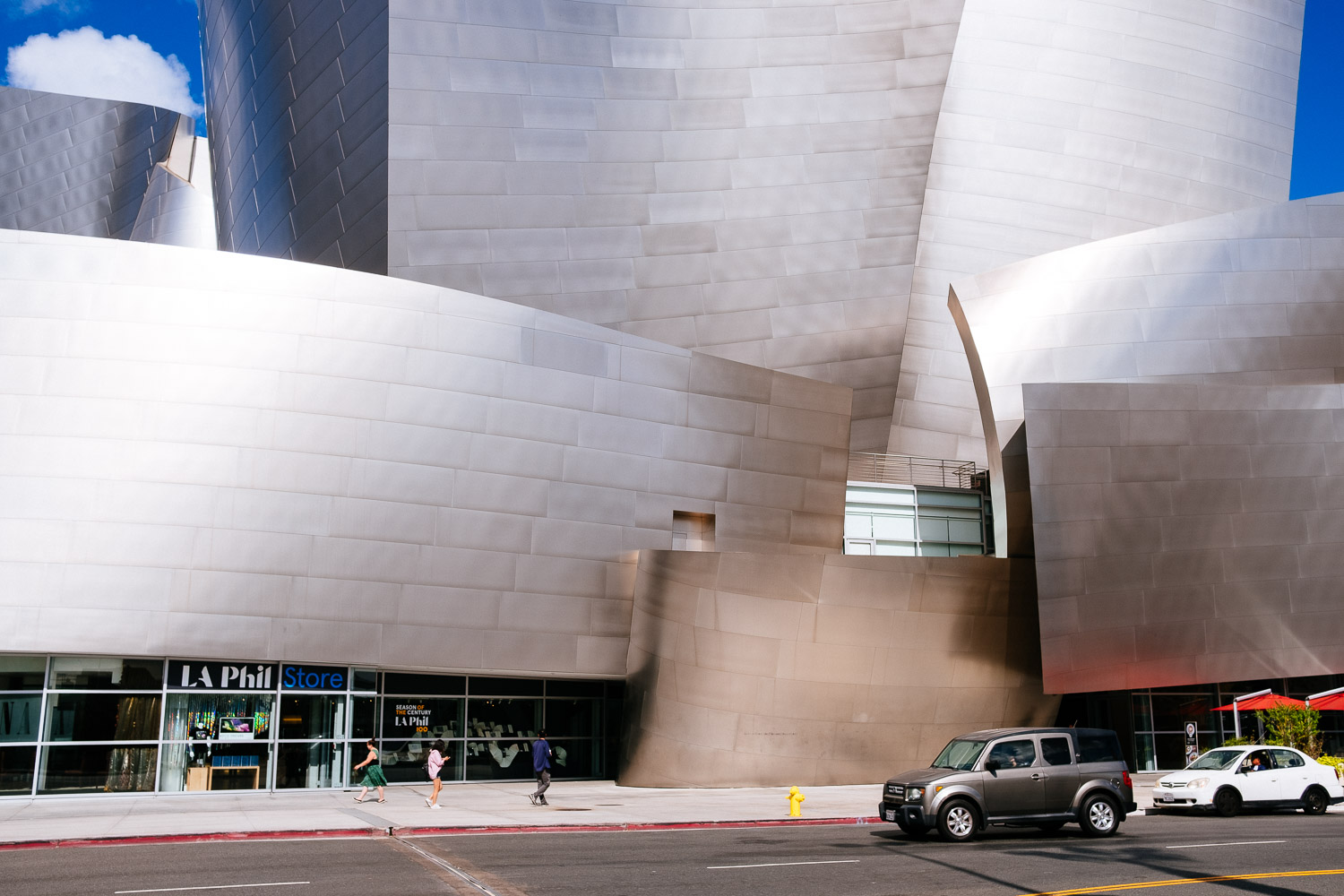