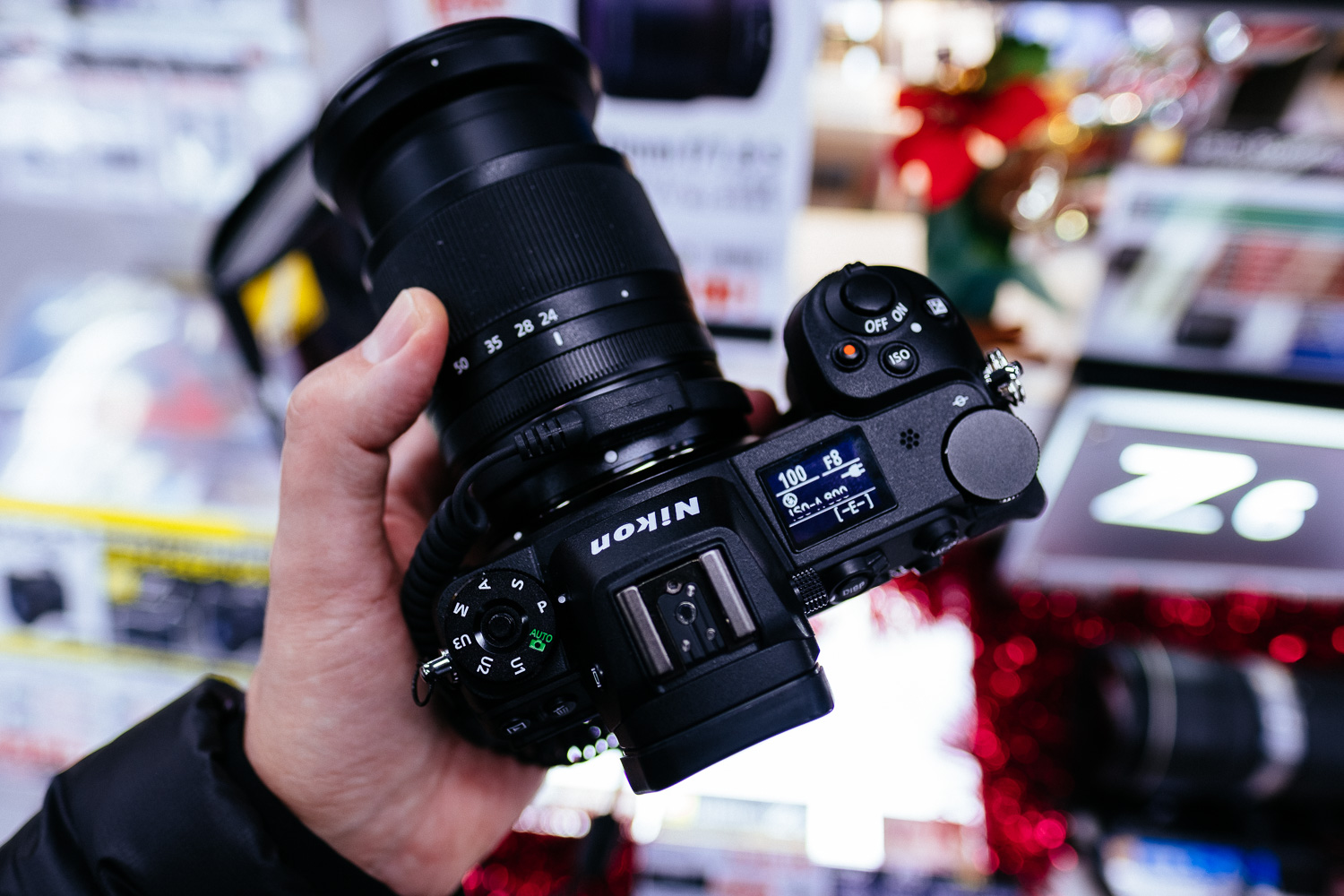 No I haven’t switched back to Nikon. I just happened to be in the Yodobashi Akiba store and had to play with all the new stuff.

This is my favorite store but I don’ want to repeat myself. If you want to have more details on Yodobashi Camera either have a look on my previous posts or google it. Of if you have ever been to a big Bass Pro shop just imagine a Bass Pro shop but for cameras and electronics and much bigger of course. 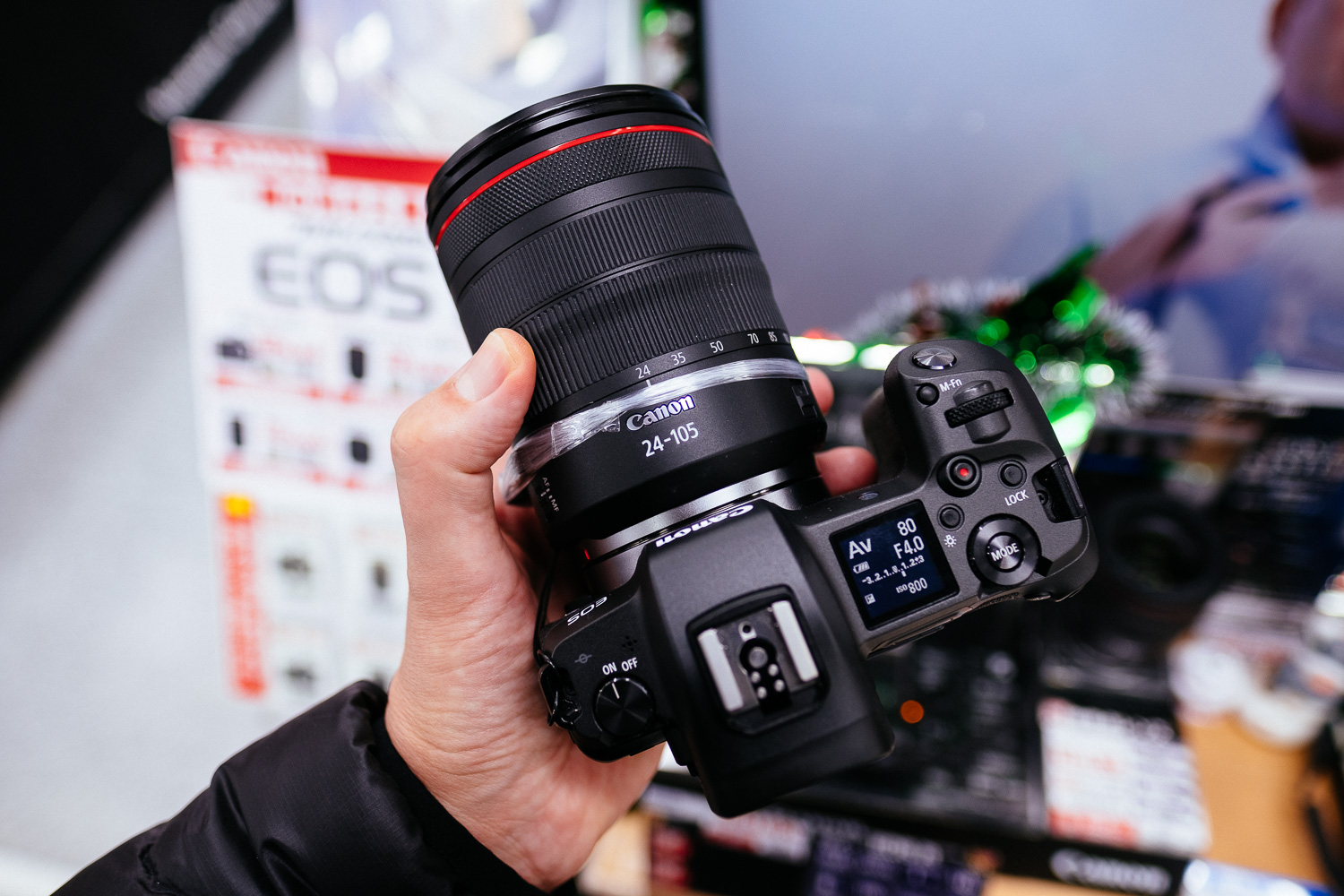 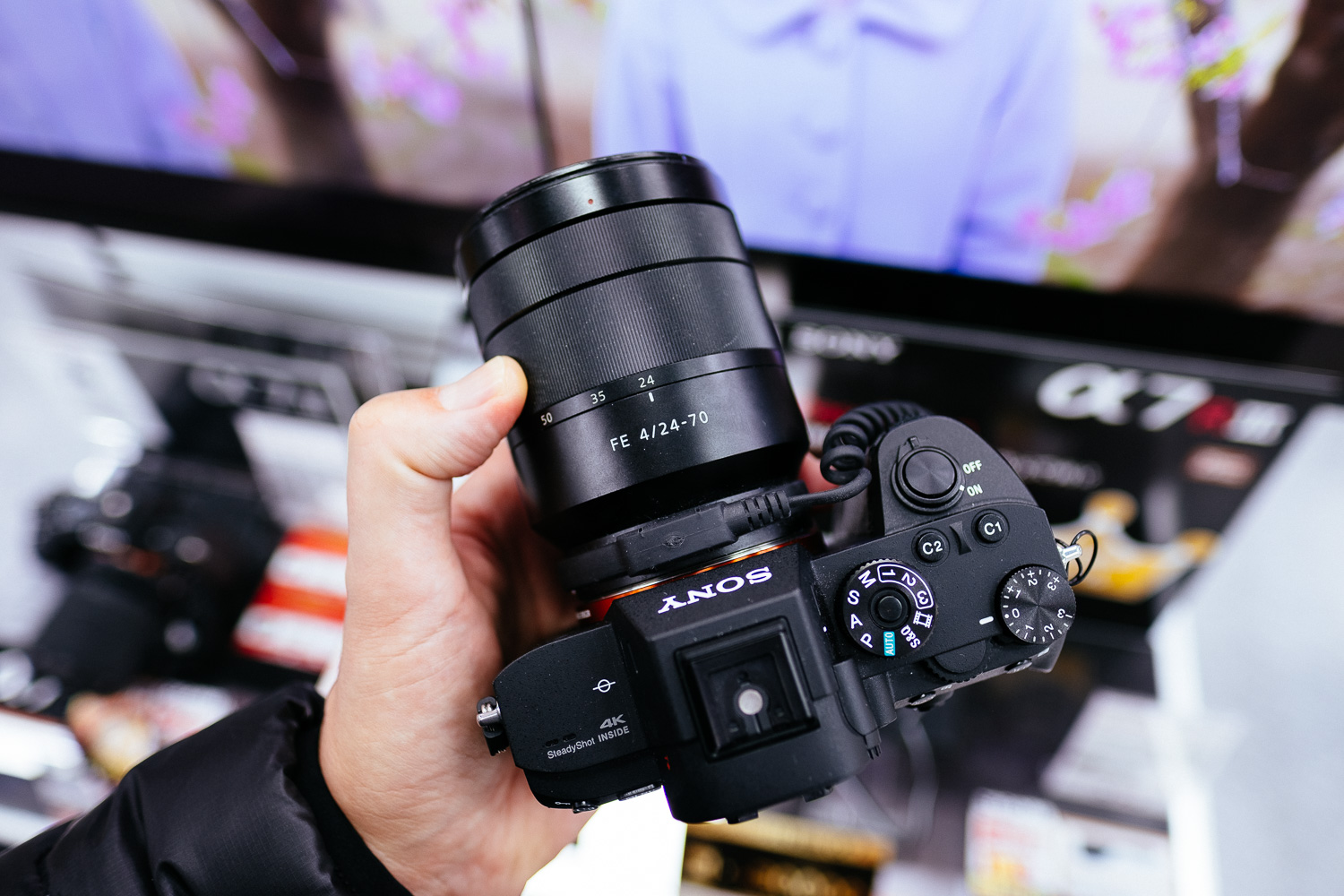 The nice thing here is that everything is on display, battery charged and ready to play. And that’s what I did. How is handling? How fast is AF? How does the shutter speed sound? How does the rubber grip smell? All those questions that you only can answer if you have the camera in your hands.

Of course I was interested in the new boys from Canon and Nikon so I tried them out first. The Nikon Z feels very nice in hand but still quite substantial. Of course that’s only true until you lift up the Canon R which feels like a DSLR. Of course the Canon has a slightly longer lens but what distracted me the most form the Nikon 24-70/4 was the fact that it extracts when you put it into the 24mm position. Last time I had this on a camera was on the Panasonic GM1 and I hated it. A lens on such a camera should never have a “parking position” for the lack of a better word for it. Poor design!

Otherwise the Nikon is nicely made and feels just right. One strange thing I realised though. Nikon introduced a PSAM mode dial while Canon went for a screen. On their SLRs and DSLRs it was always the other way around. I would always prefer the screen over that stupid PSAM dial. The viewfinder is very good though I can’t say it is so special. Maybe my eyes are not good enough to tell the difference. The newest batch of cameras all have fantastic EVFs.

Handling on both Canon and Nikon was much better than on the Sony mainly because of the much better grip. Regarding native lenses Sony is clearly the best. It’s funny how things have changed. Canon and Nikon need to put out some glass to make a nice system. Canon has made some interested first lenses but they should have integrated IBIS in their camera. Lenses aside I think that Nikon is the most attractive of the three.

Now back to Fuji. At first I had to look at the new Fuji GFX 50R which is much larger and heavier than I thought. It’s large and it’s heavy and it still manages to feel cheap especially compared to my X Pro-2. The smallest lens was attached but it didn’t help. This camera feels almost awkward in my hands and I have rather large hands.

But the worst is the shutter sound. It reminded me on the Canon 5D. I camera I loved for it’s image quality but hated for almost everything else. Essentially is was like an entry level DSLR with a full frame sensor. The Fuji GFX 50R feels a little bit like that. There is no doubt that image quality of this camera is excellent but I’m afraid the shooting experience is not. 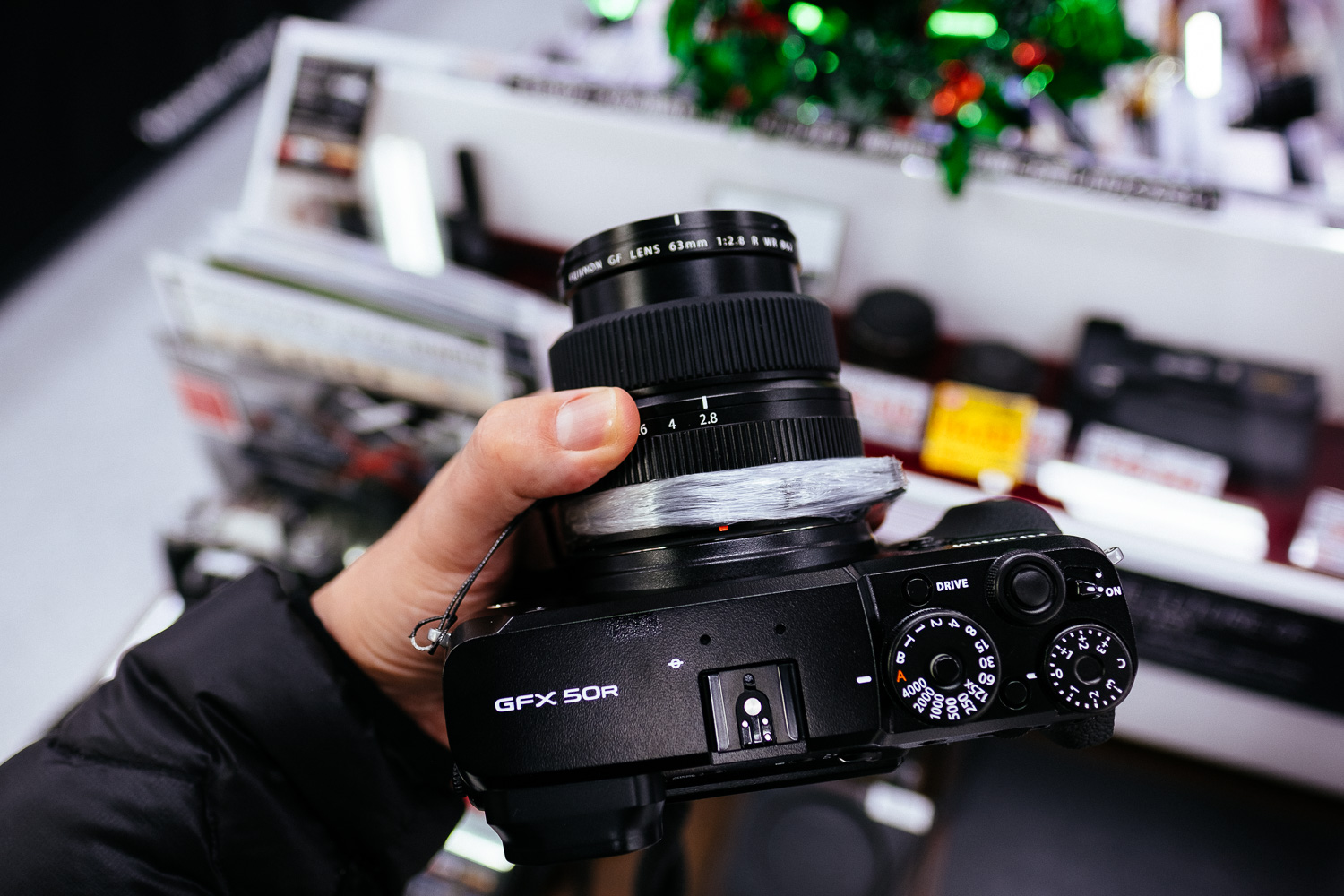 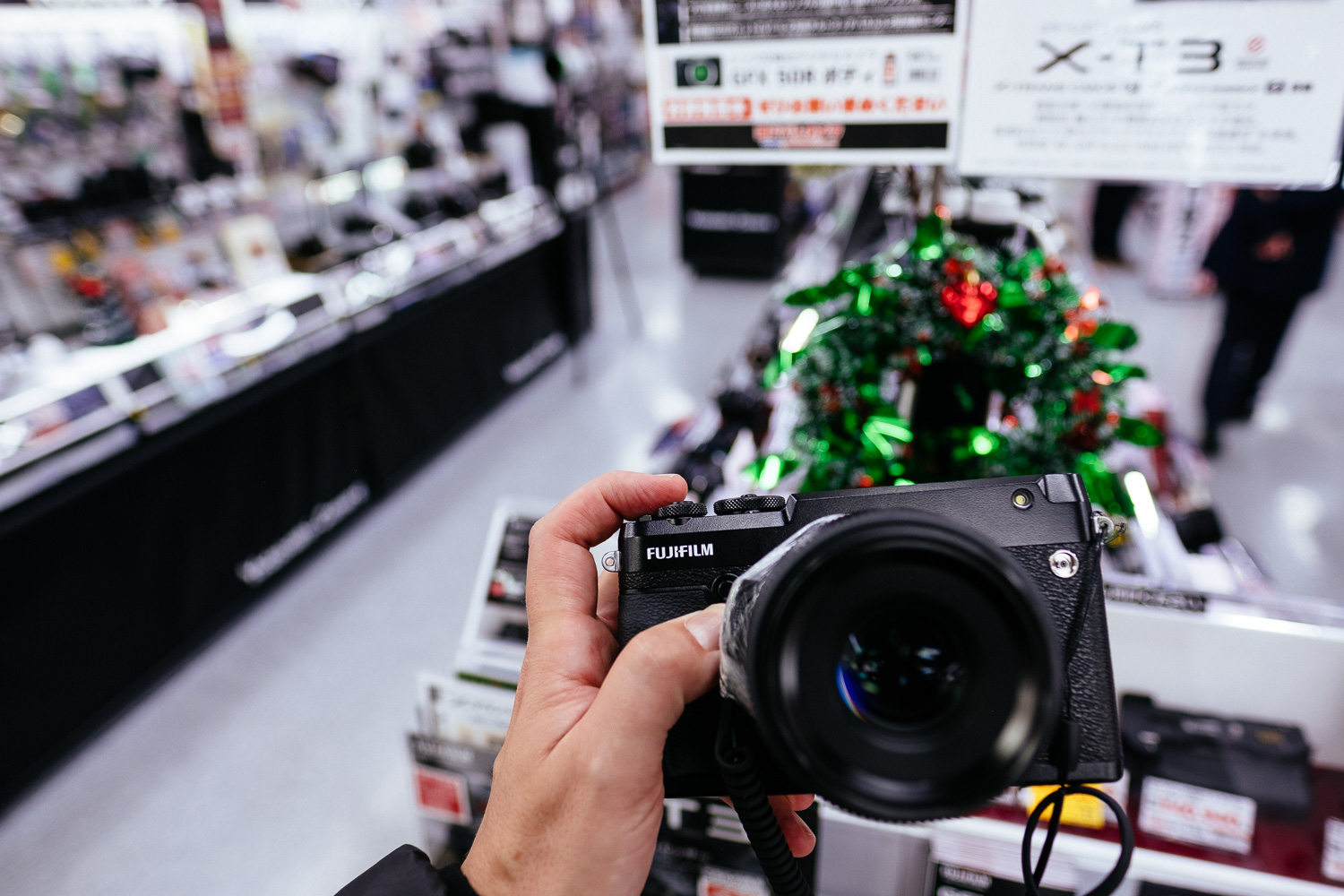 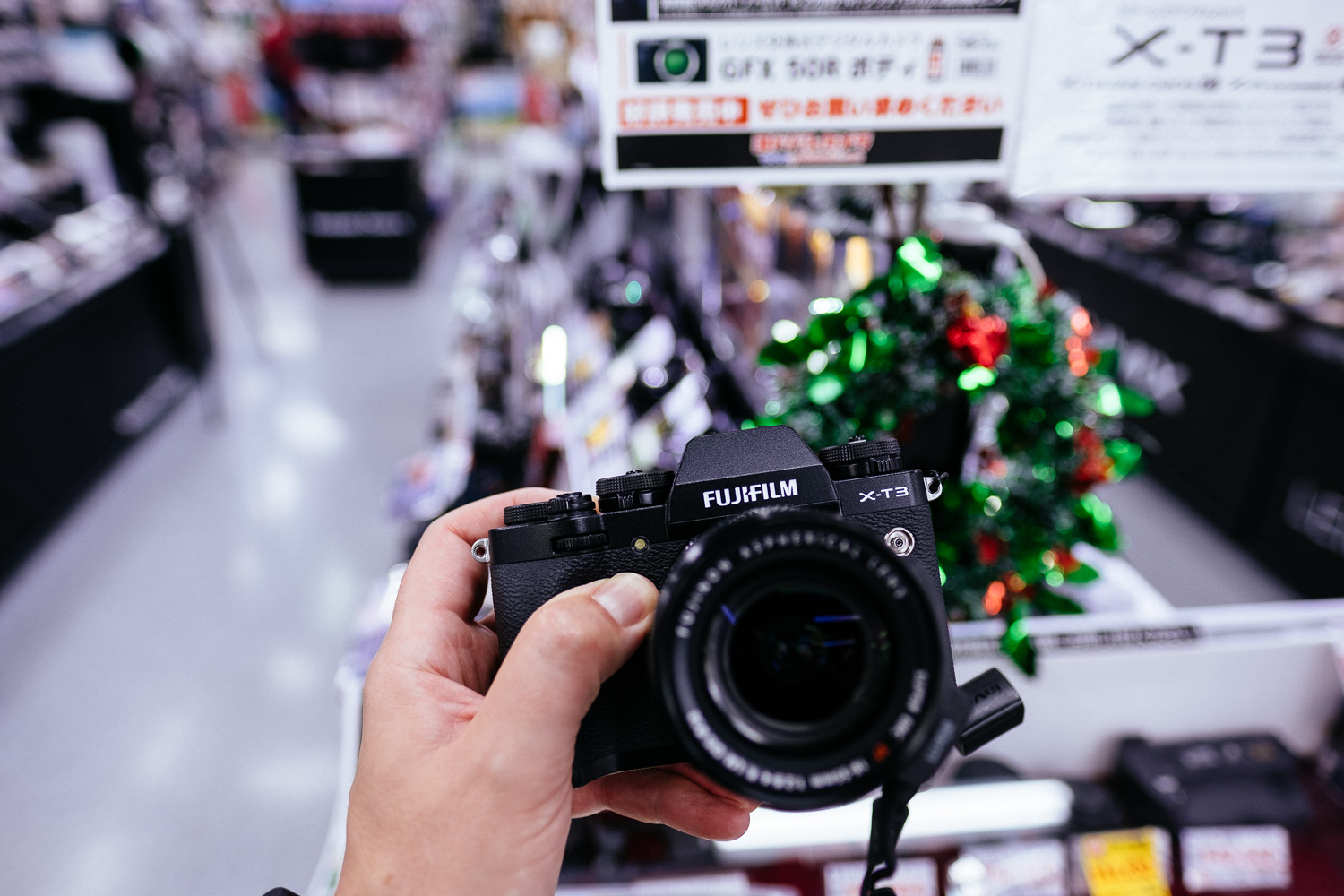 The Fuji X-T3 on the other hand feels like a perfectly rounded camera and the Fuji X-H1 even more so. I prefer the size and weight of the X-T3 but I really love the shutter release and the almost non-existent shutter sound of the X-H1. The X-H1 also feels better made in my hands while the X-T3 is still close to the X-T2.

If I would need a second camera for my X Pro-2 today I think I would rather get the X-H1 despite the AF advantages of the newer X-T3. The Fuji X-H1 just feels more solid and I think I have mentioned shutter button and shutter sound already. 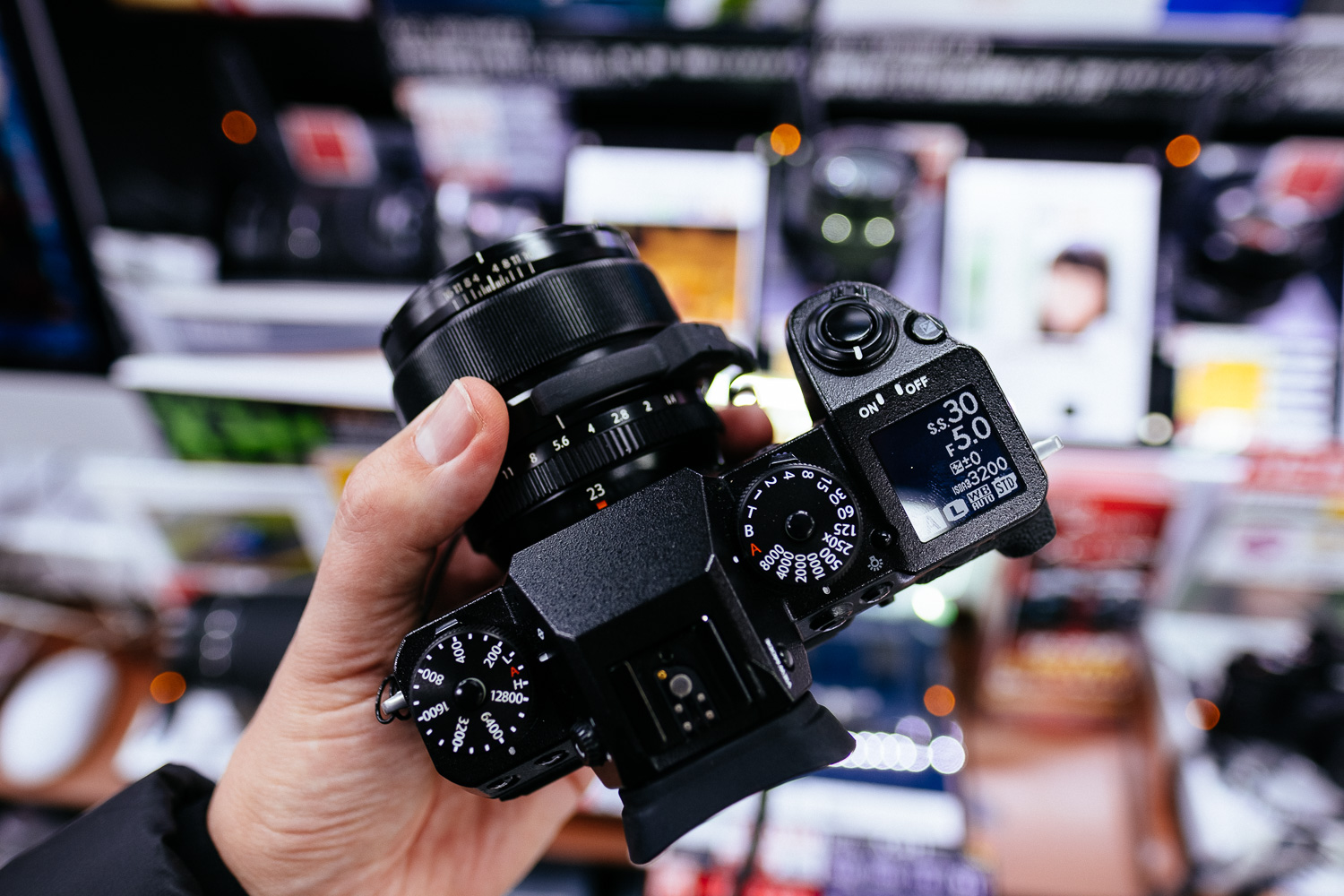 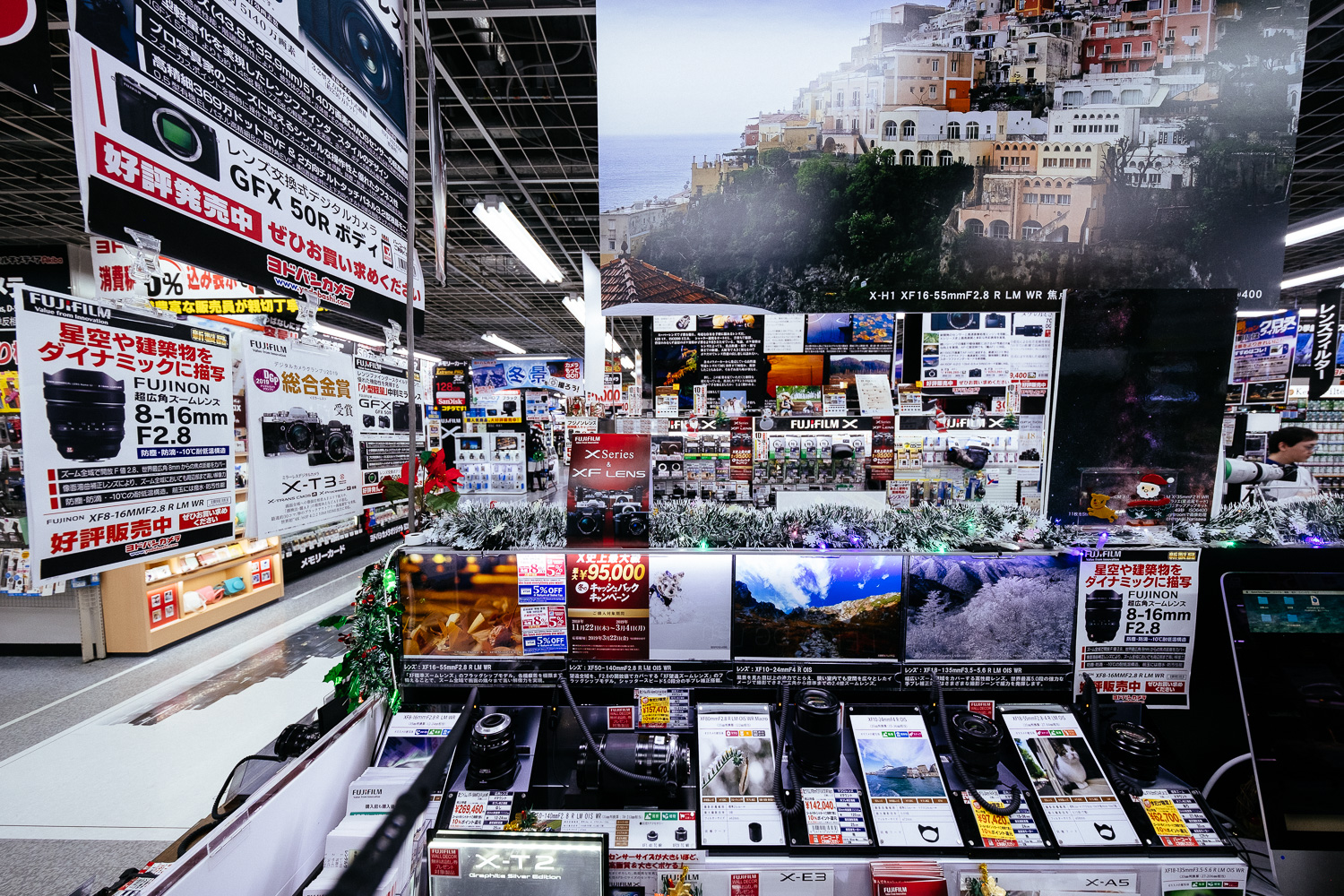 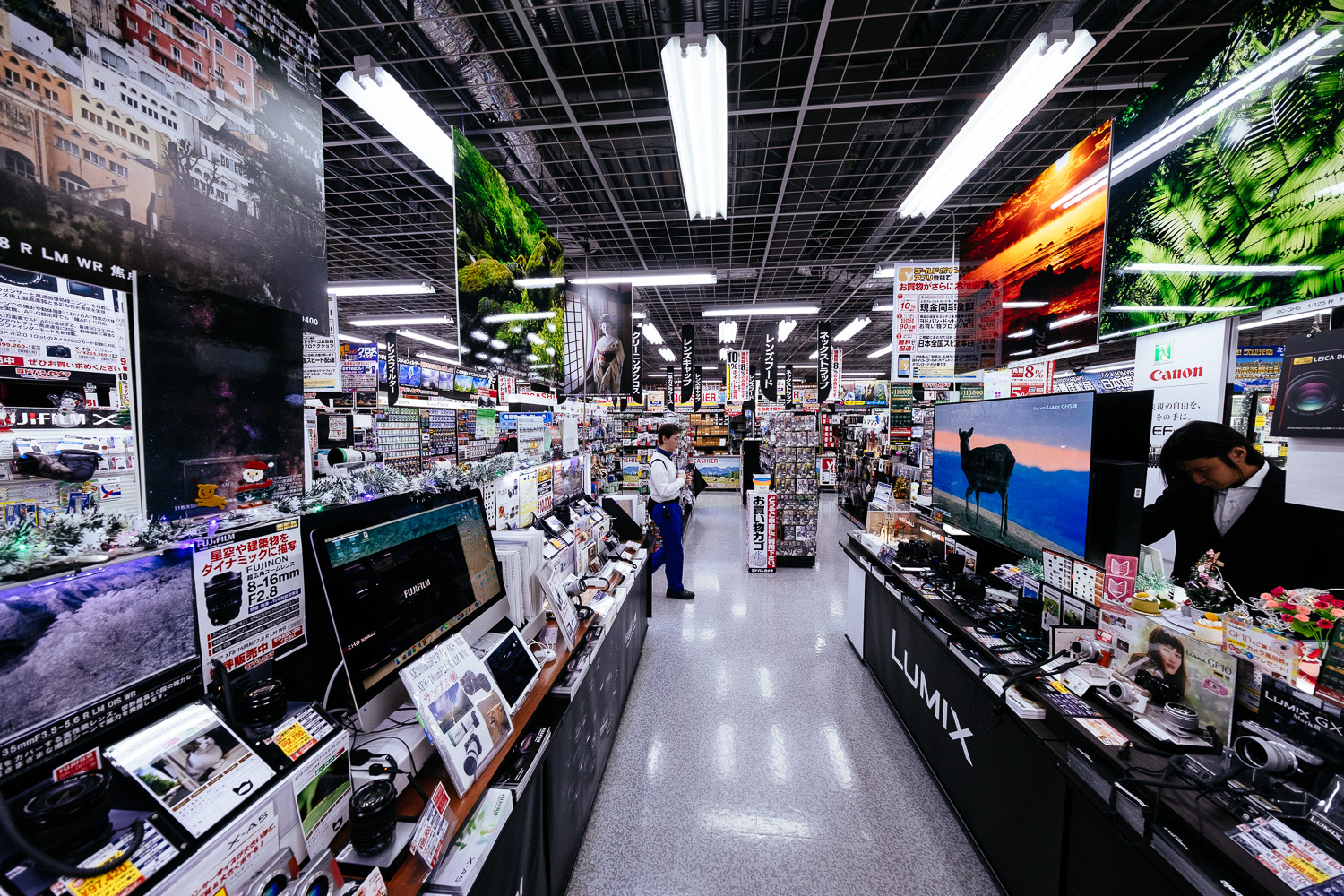 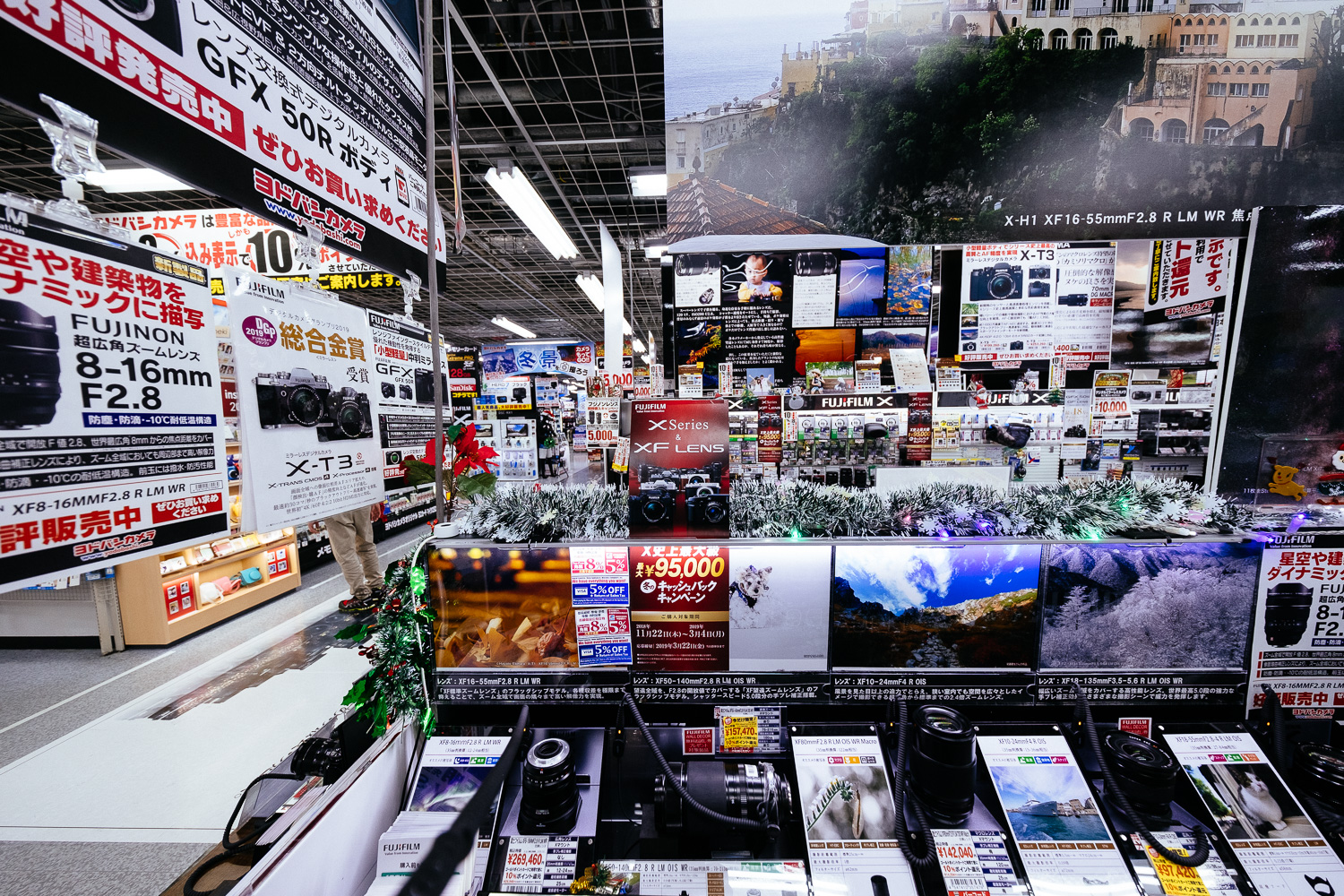 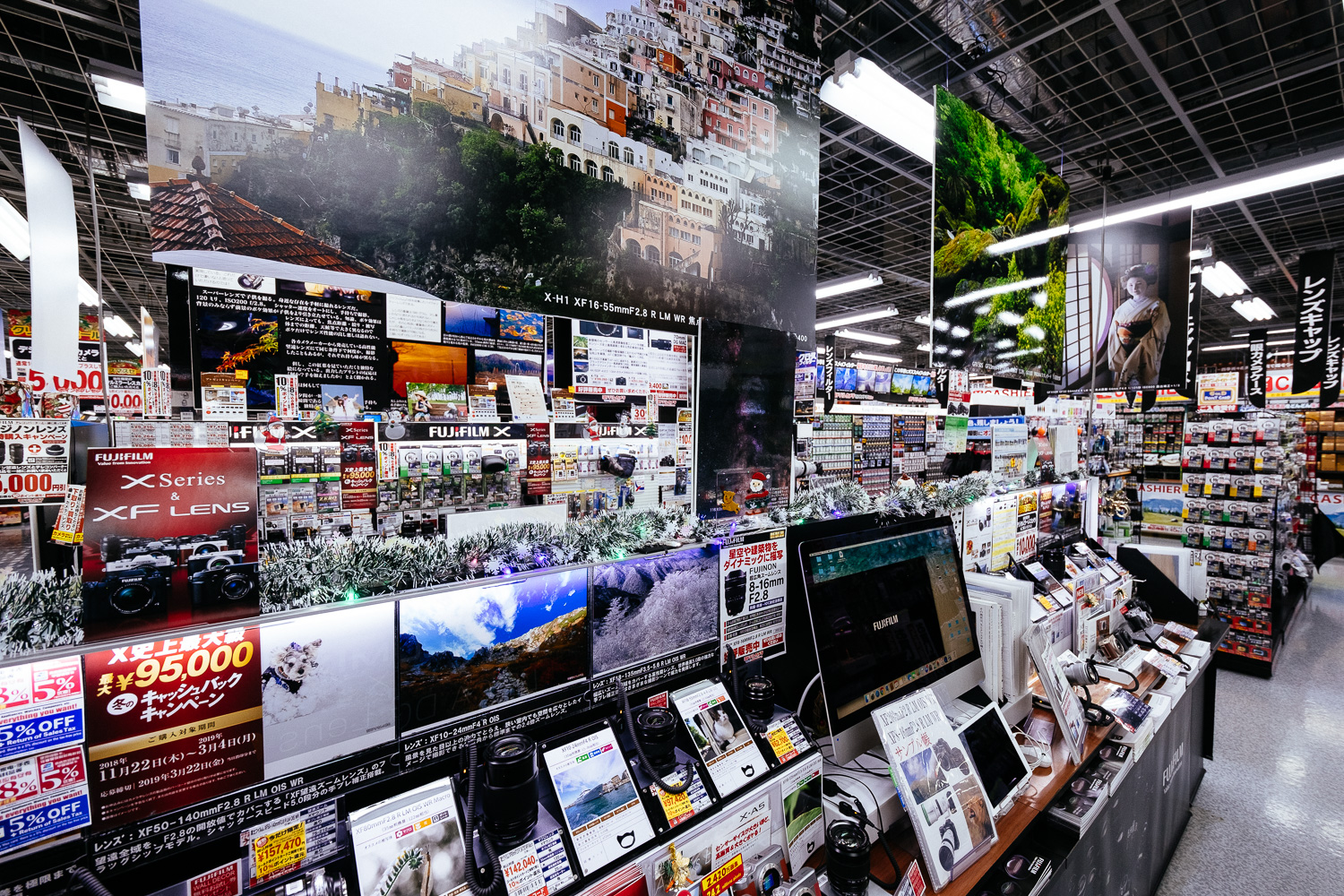 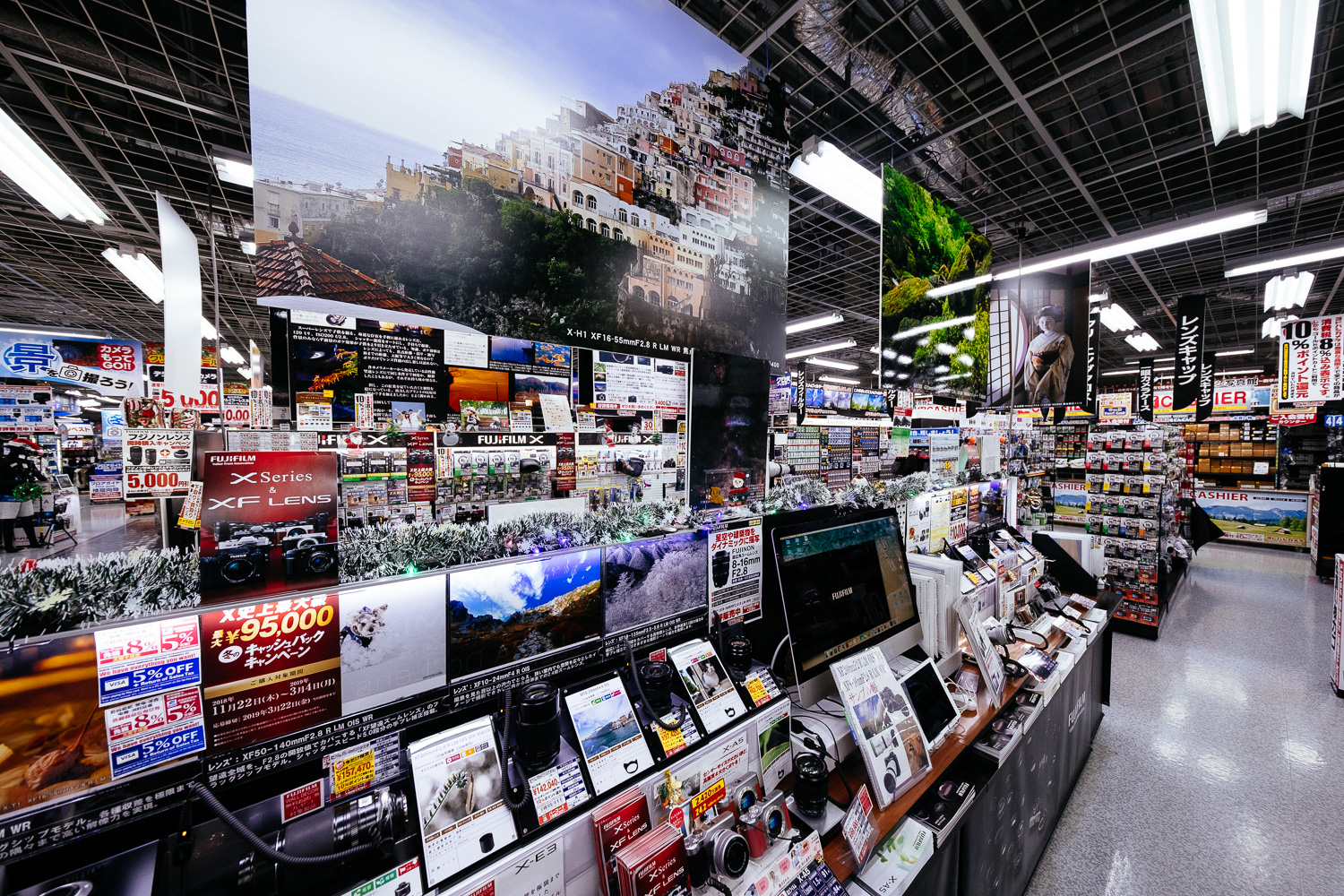 Now the nice thing about Yodobashi camera is that you can play with all the cameras and also with all the lenses for your camera. So if you brought your camera you can attach whatever is available and take some pictures. So of course I had to try out the new Fuji XF 8-16/2.8 R LM WR. Quite a long name but it means that all the good stuff is there: aperture ring, linear motor and weather resistance. And it’s fast and wide and I mean really wide.

When it was announced I was very certain that I will pass this lens. Too big, too heavy, too expensive, too wide. Too wide? I’m not so sure about that anymore. And regarding weight and size I think it is save to say that in the real world this lens will spend a lot of time on a camera which is mounted on a tripod. In that case weight of course becomes meaningless. This is a landscape/seascape lens or a lens for real estate interior photography that make the average living room like a ball room. I can see its potential potential for those occasions where you want to go ultra wide. Arches NP comes into mind or of course coastal images with some beautiful rocks in the foreground.

For city trips I think it is too wide and tricky to handle unless you have no problem with buildings that falling backwards. The last two images above show the difference in between 10 and 8mm. I think it is still quite substantial. I have to say that I’m attracted to it despite all its limitations mentioned above. 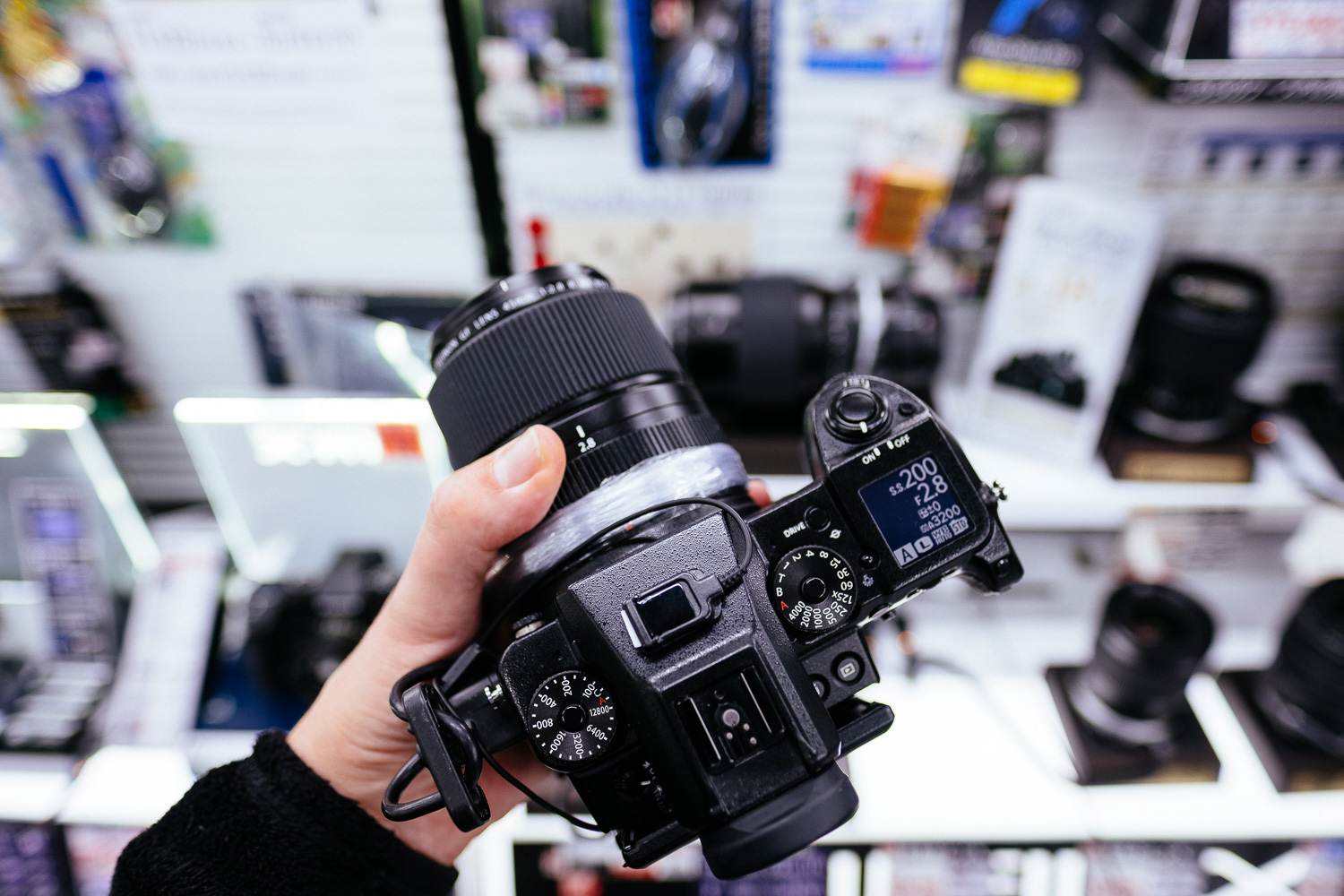 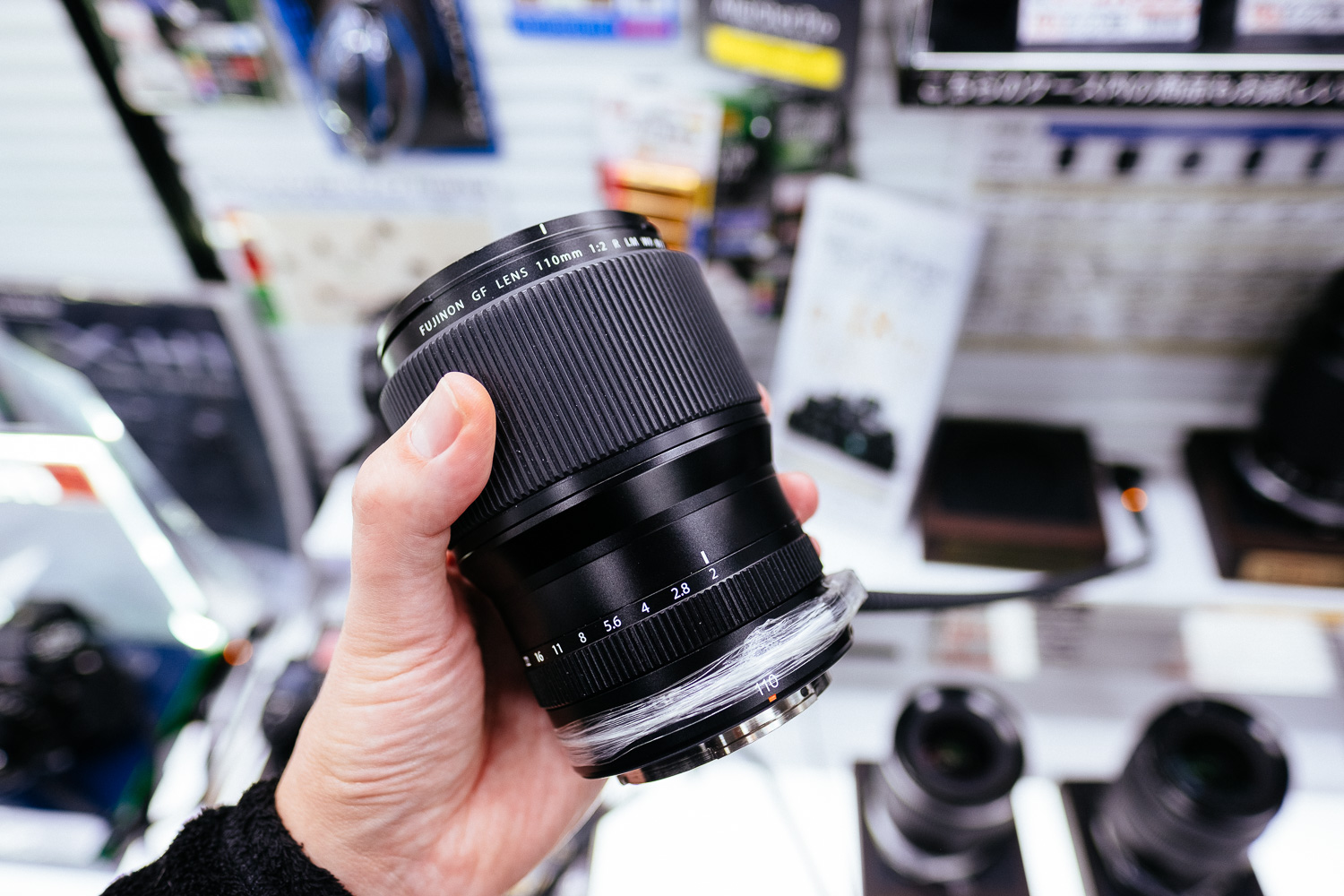 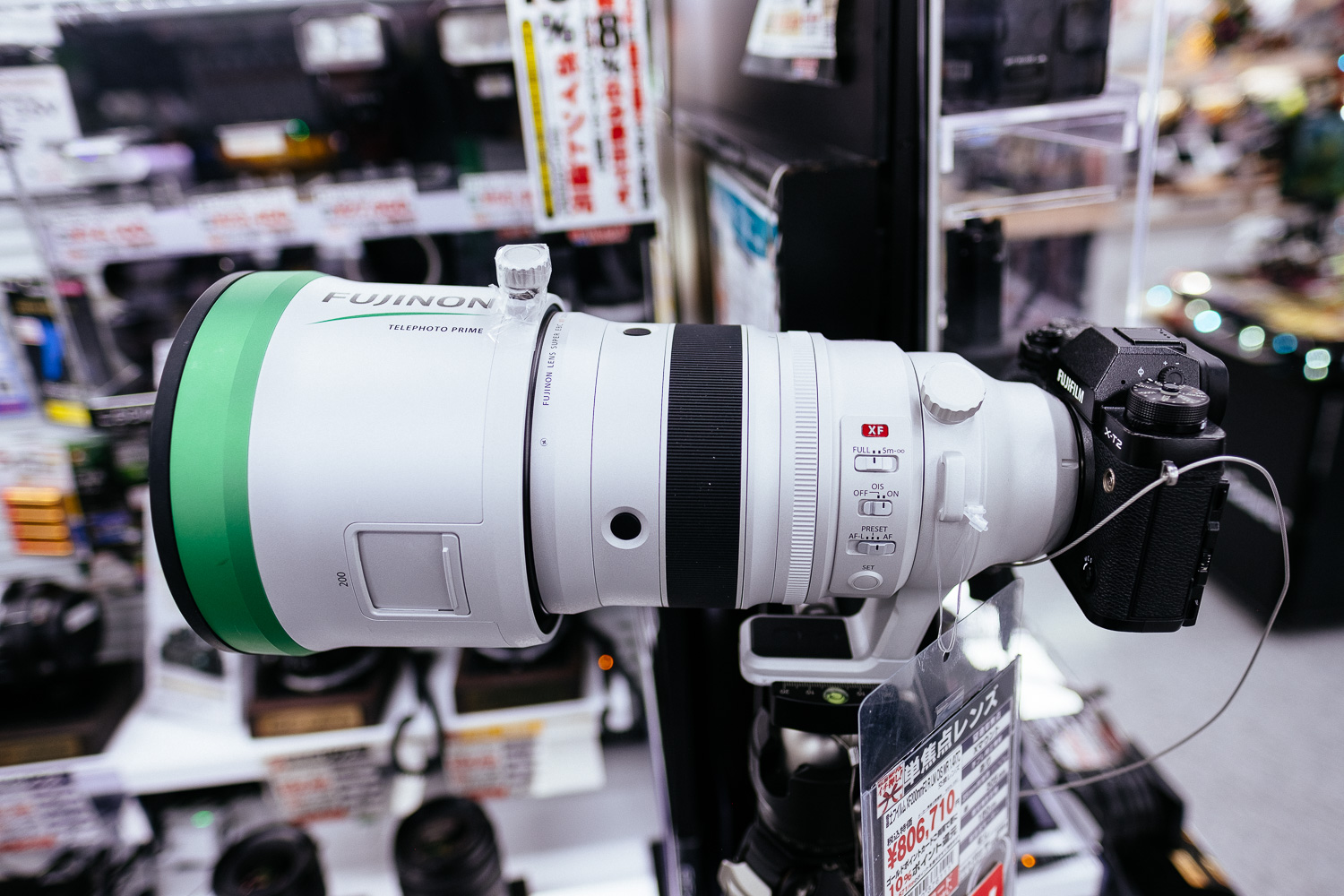 On the other end of the spectrum is the new Fuji XF 200/2 R LM OIS WR. This is one nice lens. It’s built quality seems to be superb. Cleary on par with the offerings from Canon and Nikon. I have also no problem with the white colour but I’m not so sure about the green ring and the black rubber on the focus ring that seems to cut the lens into two halves.

It’s a substantial lens with 2,3 kg but then my Nikon AF-S 2.8/300 ED was almost 3,5 kg. And like the 8-16 this lens will spend most of it’s time on a tripod too so weight is not a big deal. Even though it will not sell in huge numbers it is an important lens for Fuji because it puts the system on the map for professional photographers. A 300/2.8 is one of the most important and most versatile tele lenses. And I think it’s weight is still just manageable to take it on a vacation where wildlife photography would play an important part.

Below I have checked out a lens I would have liked when I still owned my Sony A7R. But back then there were almost no lenses to I adapted my Canon glass which was huge. The Sony FE 4/12-24 G looks like a very fine lens and practically the equivalent of Fuji’s new XF 8-16/2.8 R L WR. It looks a little cheaper made but it’s about the same price. It’s much lighter though! 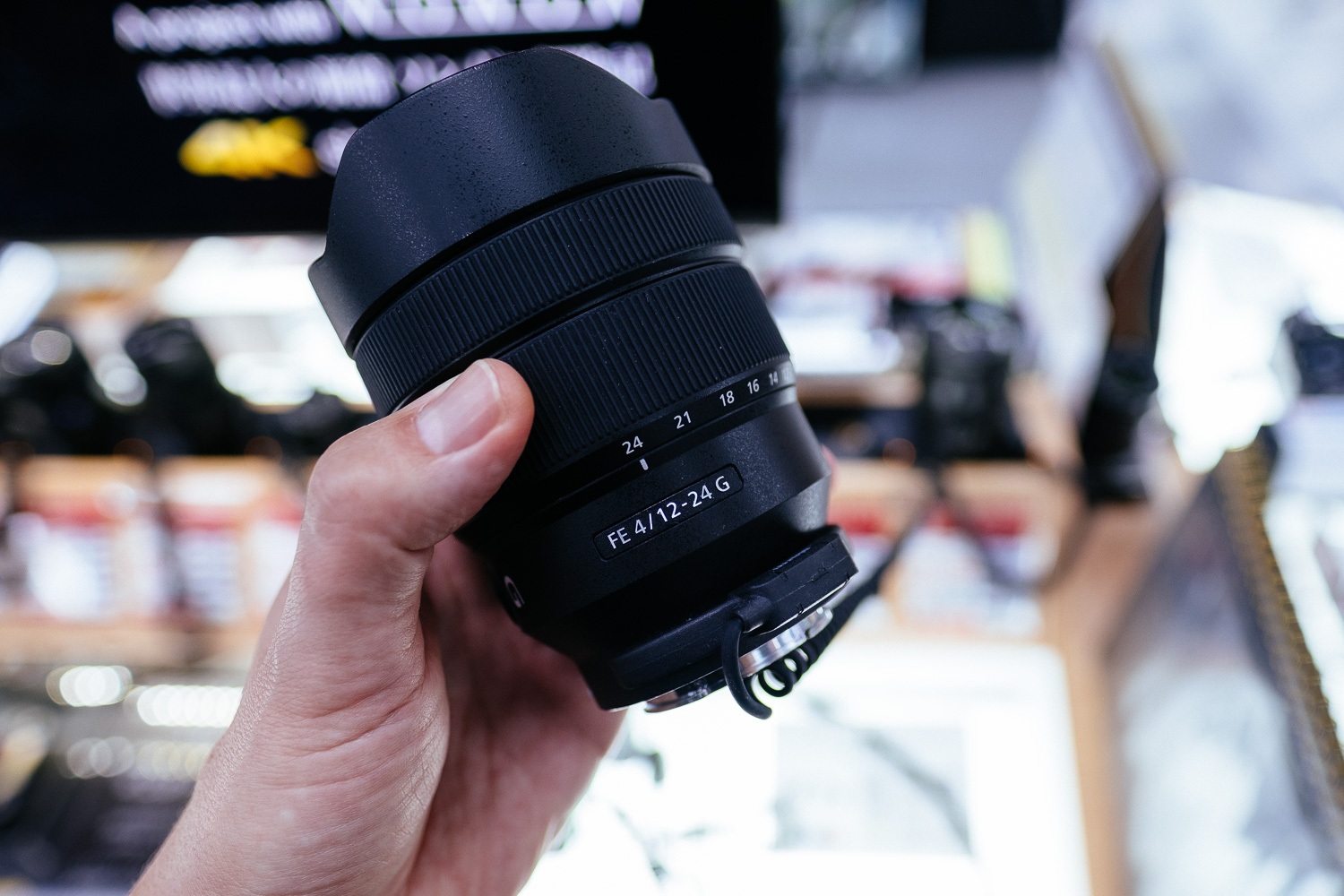 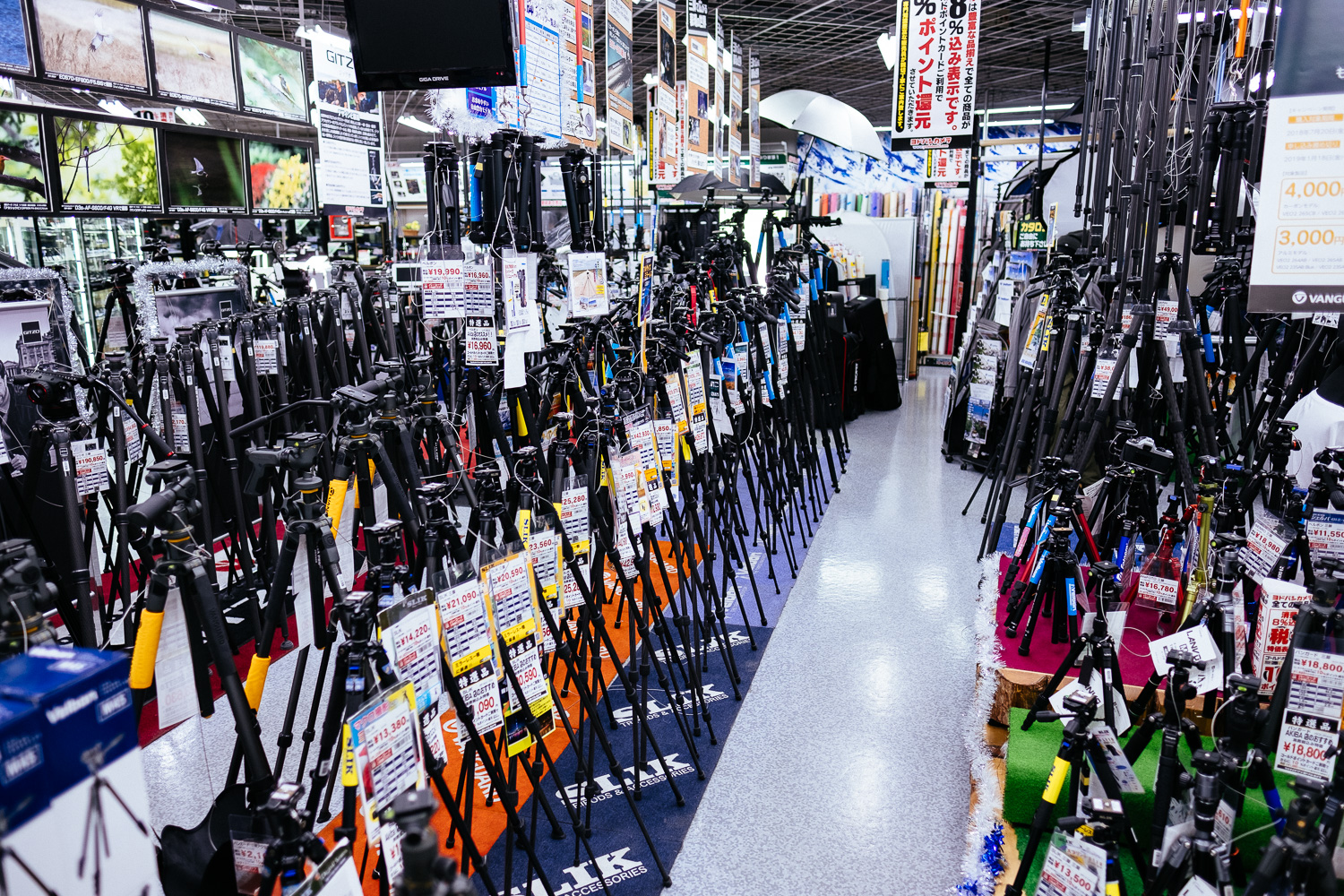 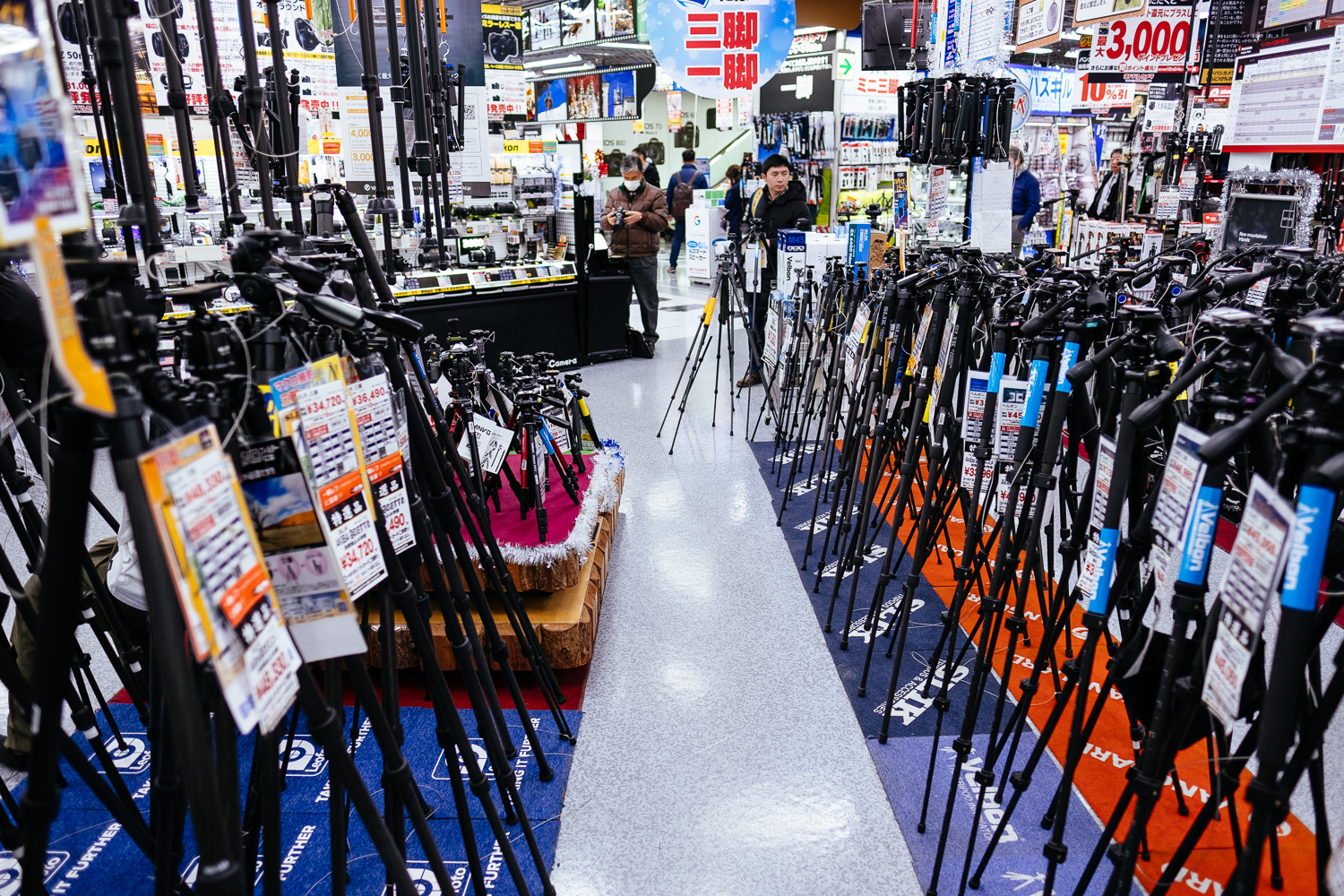 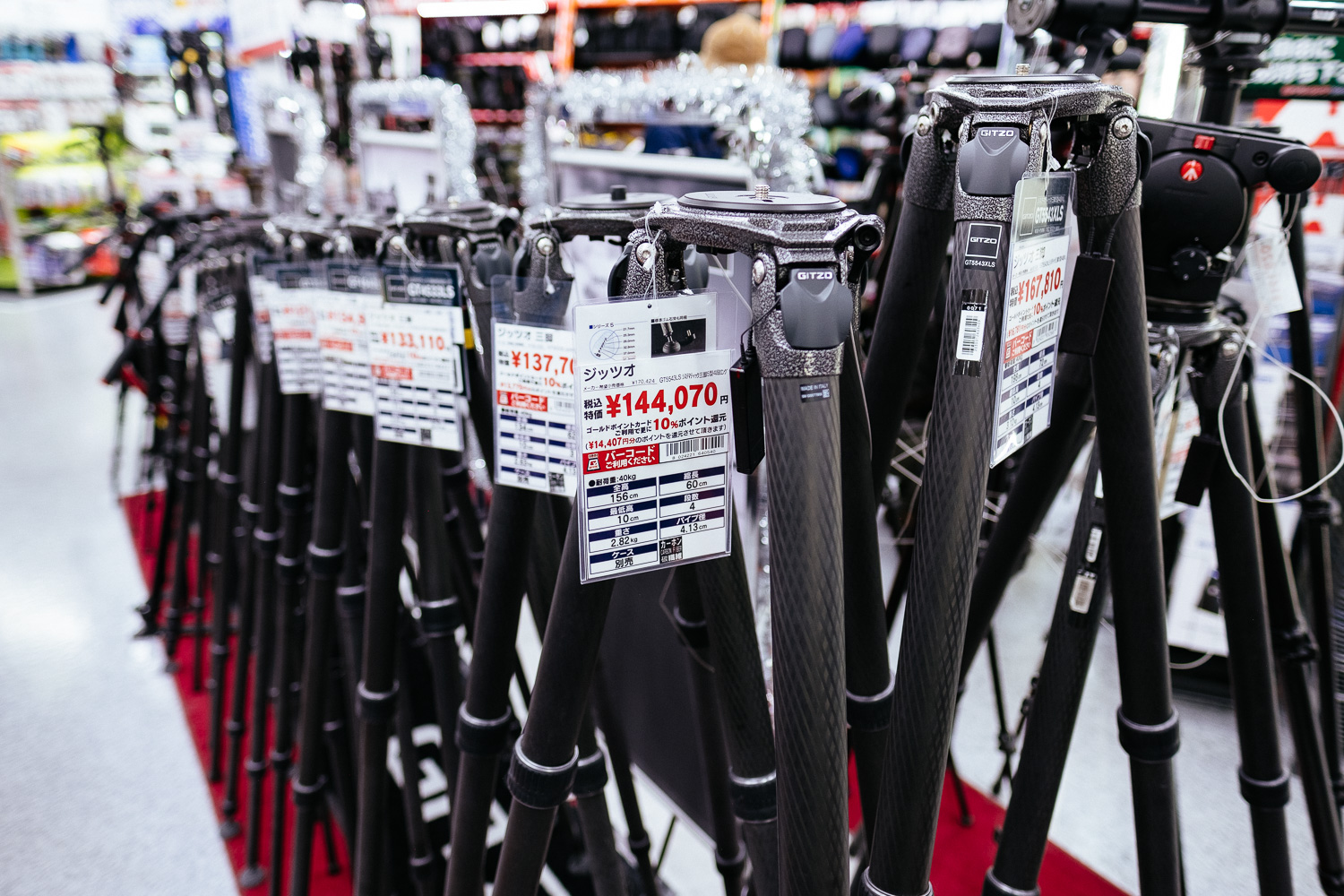 I haven’t used a tripod in years but looking at this forest of tripods almost make me want to buy one. I think that is the secret of Yodobashi camera. Everything is there. Every camera body, every lens, every tripod, every accessory. Everything is on display, everything is set up to play with it.

This is like a toy shop but for adults. I could spend hours here especially on a cold and rainy day like today and I did.

At the beginning I looked at the full frame mirrorless options and I liked how they handled. Especially the Nikon Z but then I also had a look at the lenses that I would eventually or better likely get for the larger sensors and those lenses are massive! The Zeiss Milvus 135/2 and even more so the Sigma 105/1.4 are good examples. Those are the lenses that would make a significant difference to what can be achieved with an APS-C camera. Especially for the Sigma there is no substitute in APS-C. That would be a 70/0.95. A crazy lens.

But how many ultra thin DOF images can you shoot before it wears out. It’s almost like with a fish eye lens. If you see an image now and then it is fine but if you look at dozens of fish eye shots they start to look the same. Same happens with images with ultra thin DOF. Still if this is your thing you have to shoot full frame. 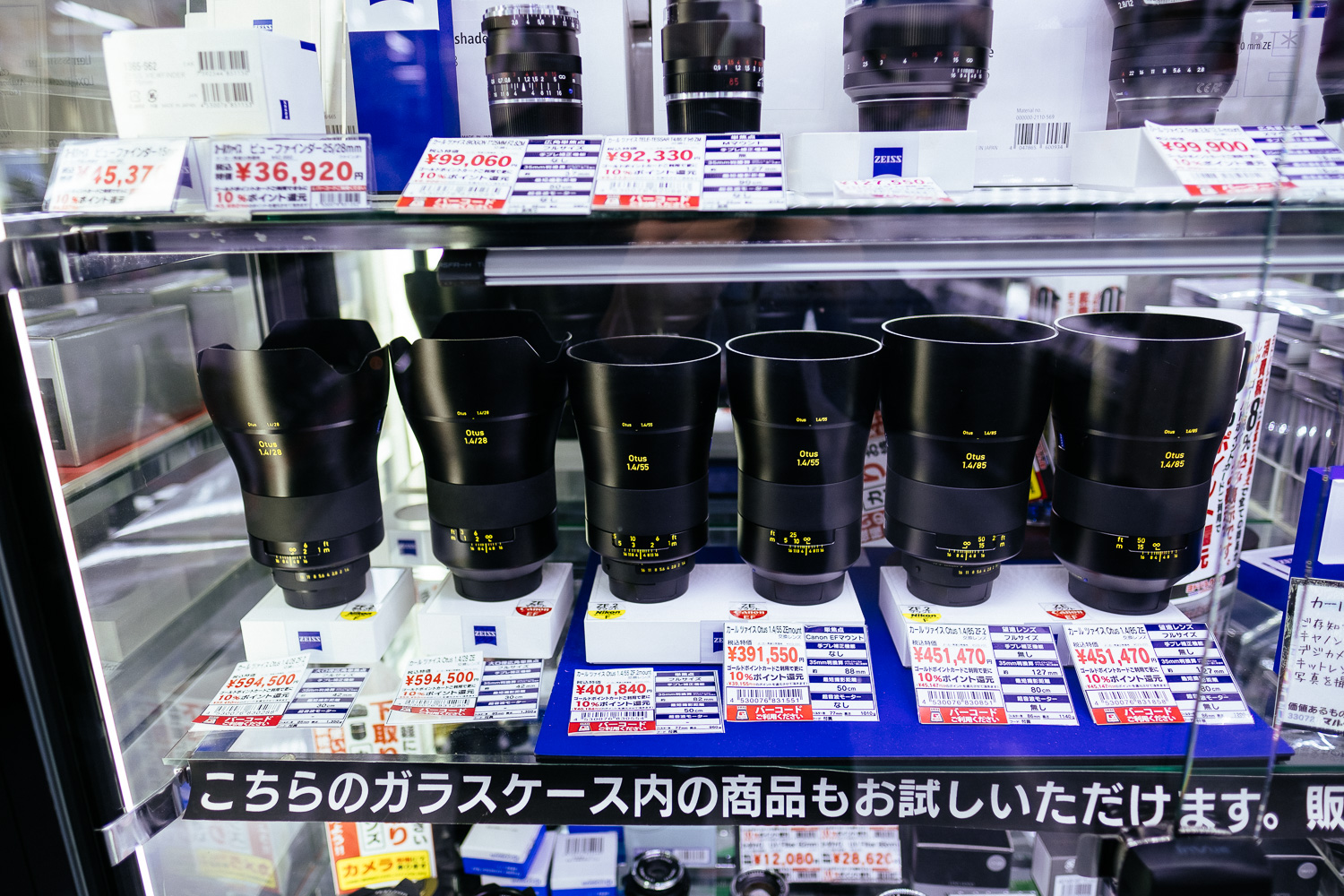 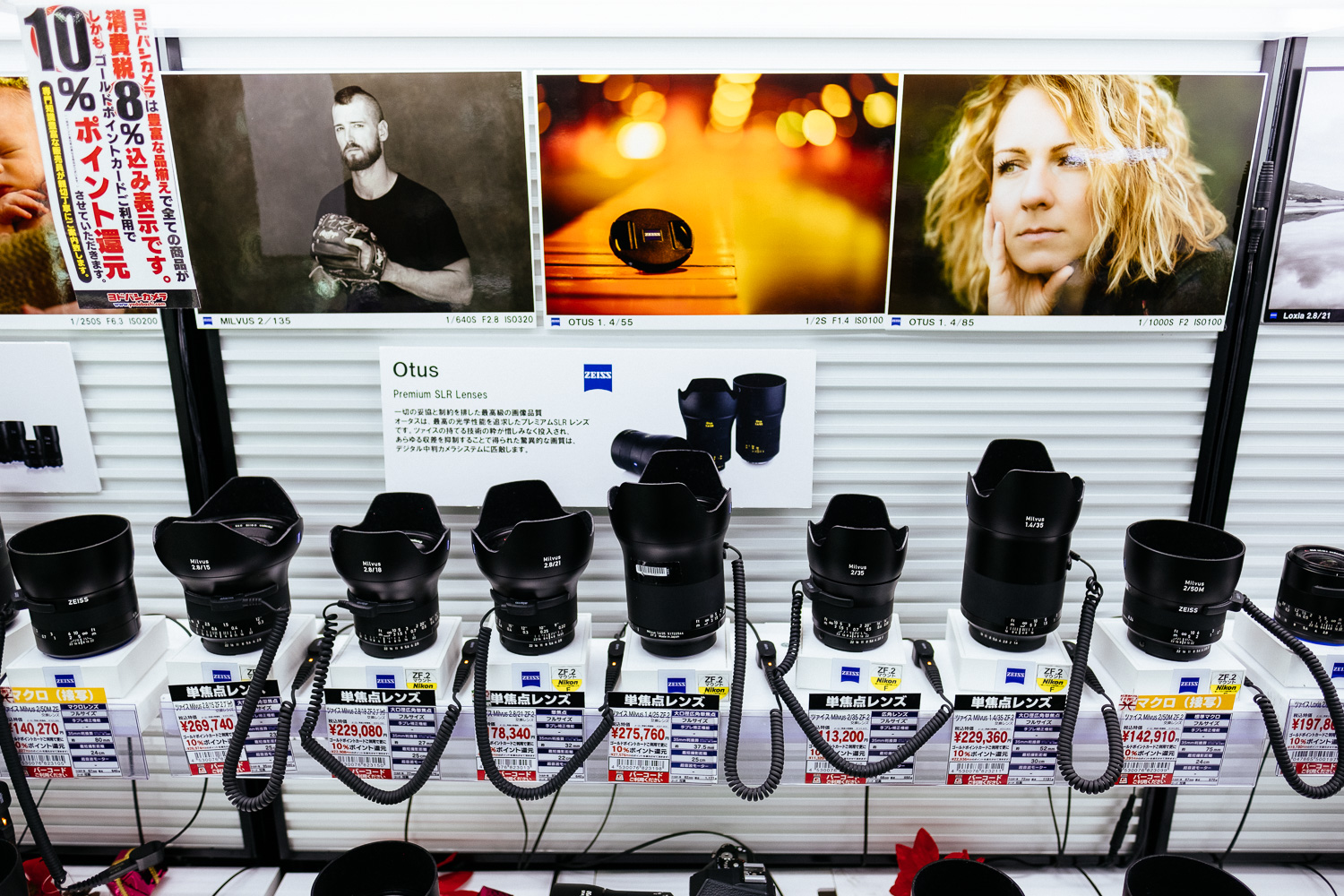 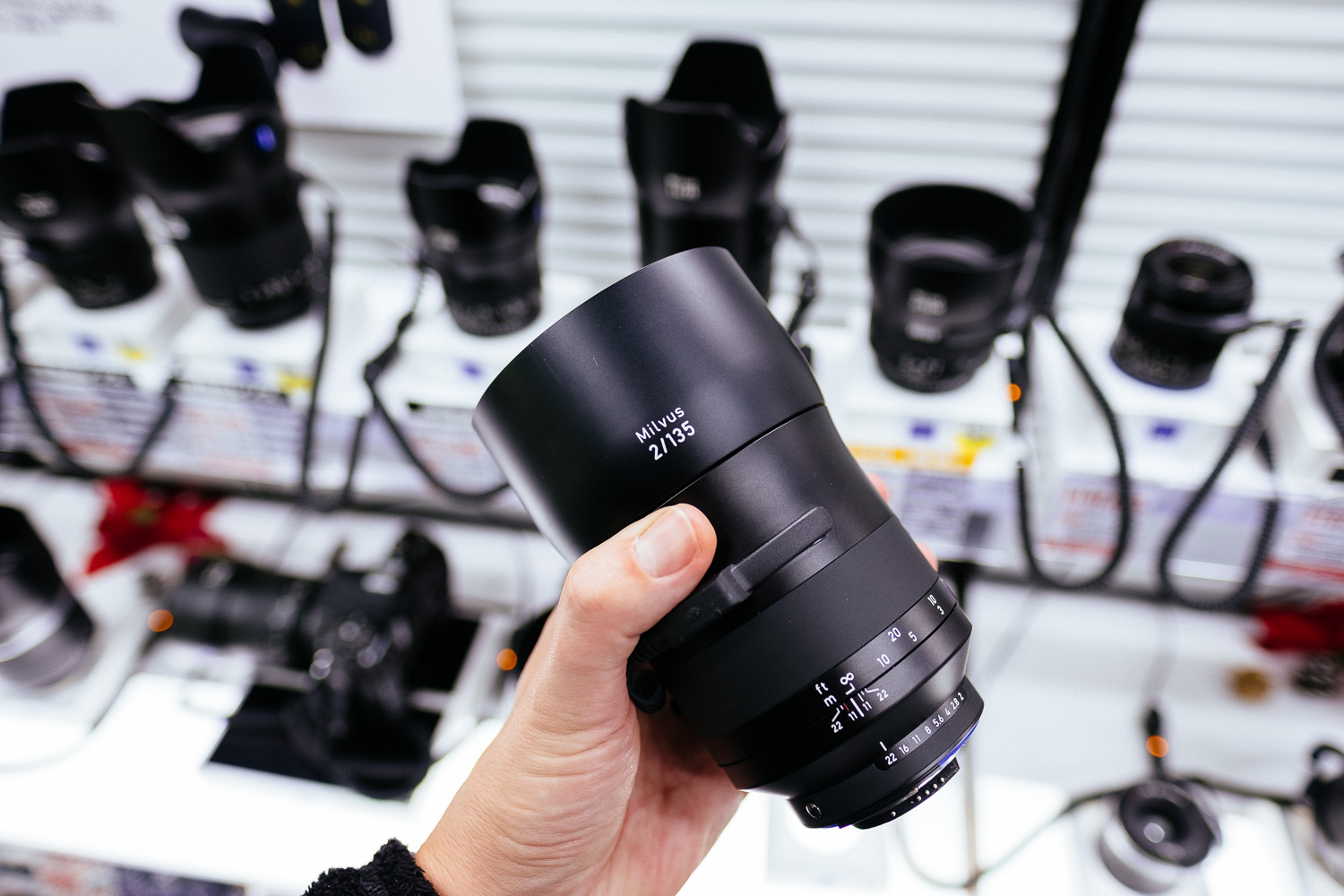 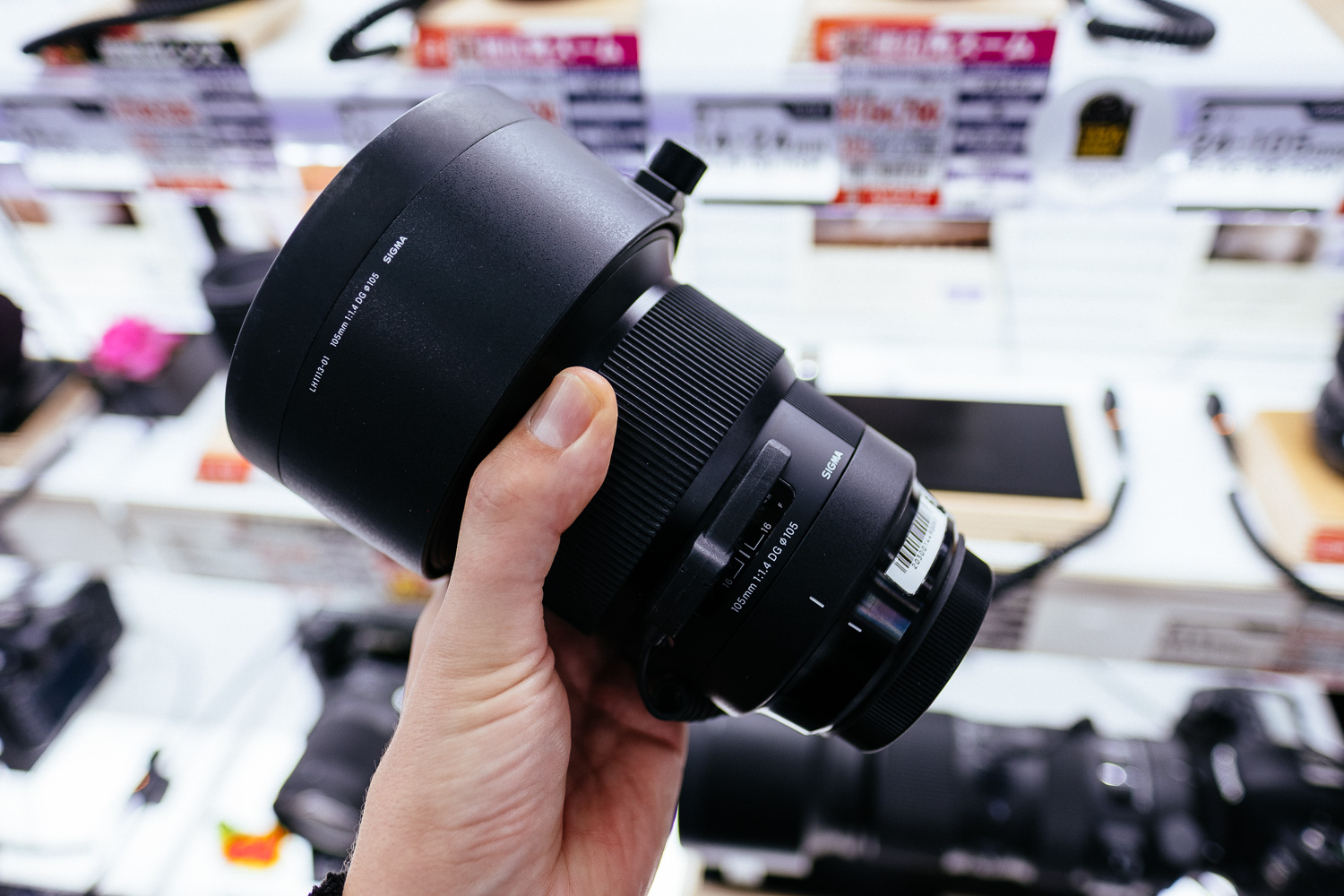 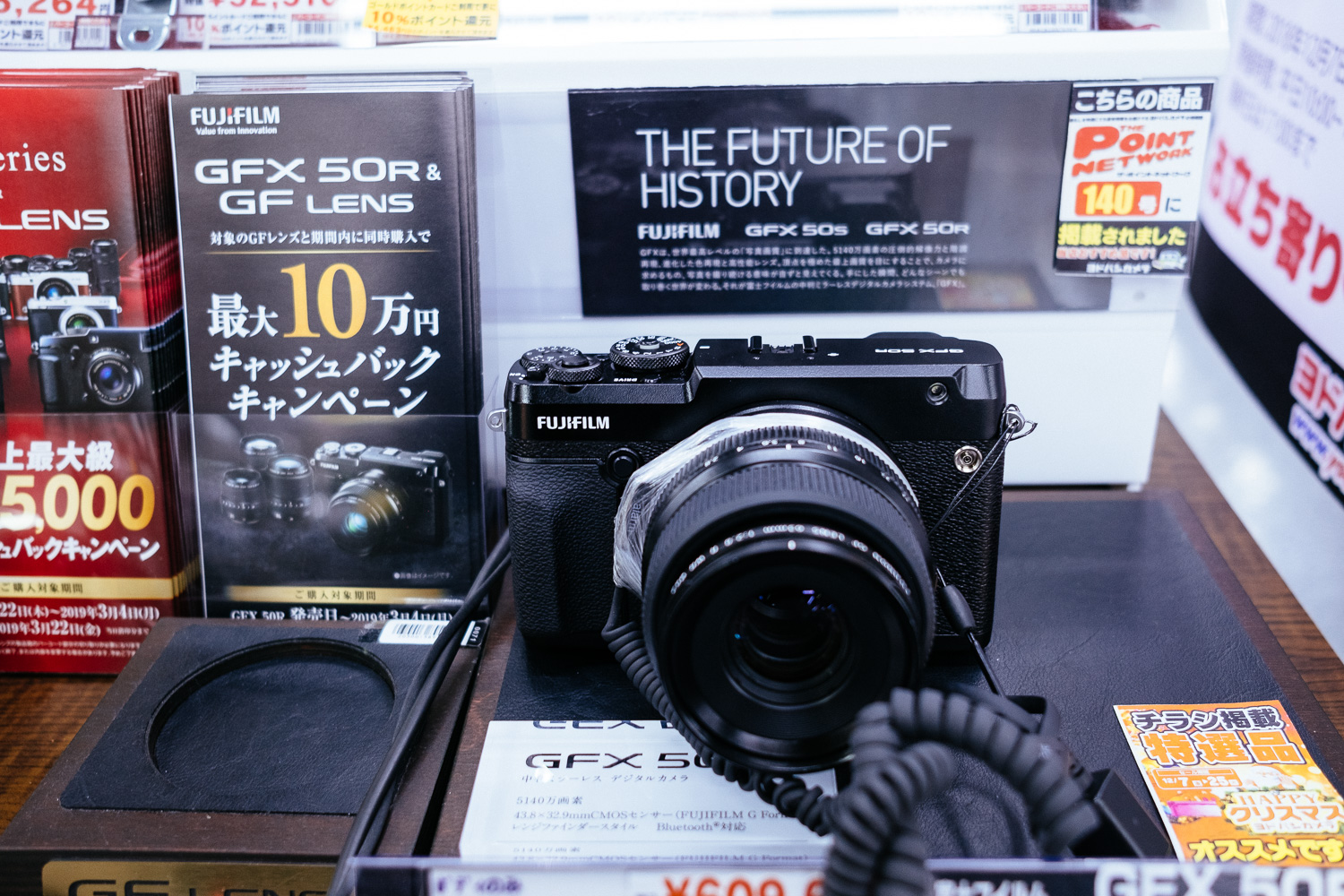 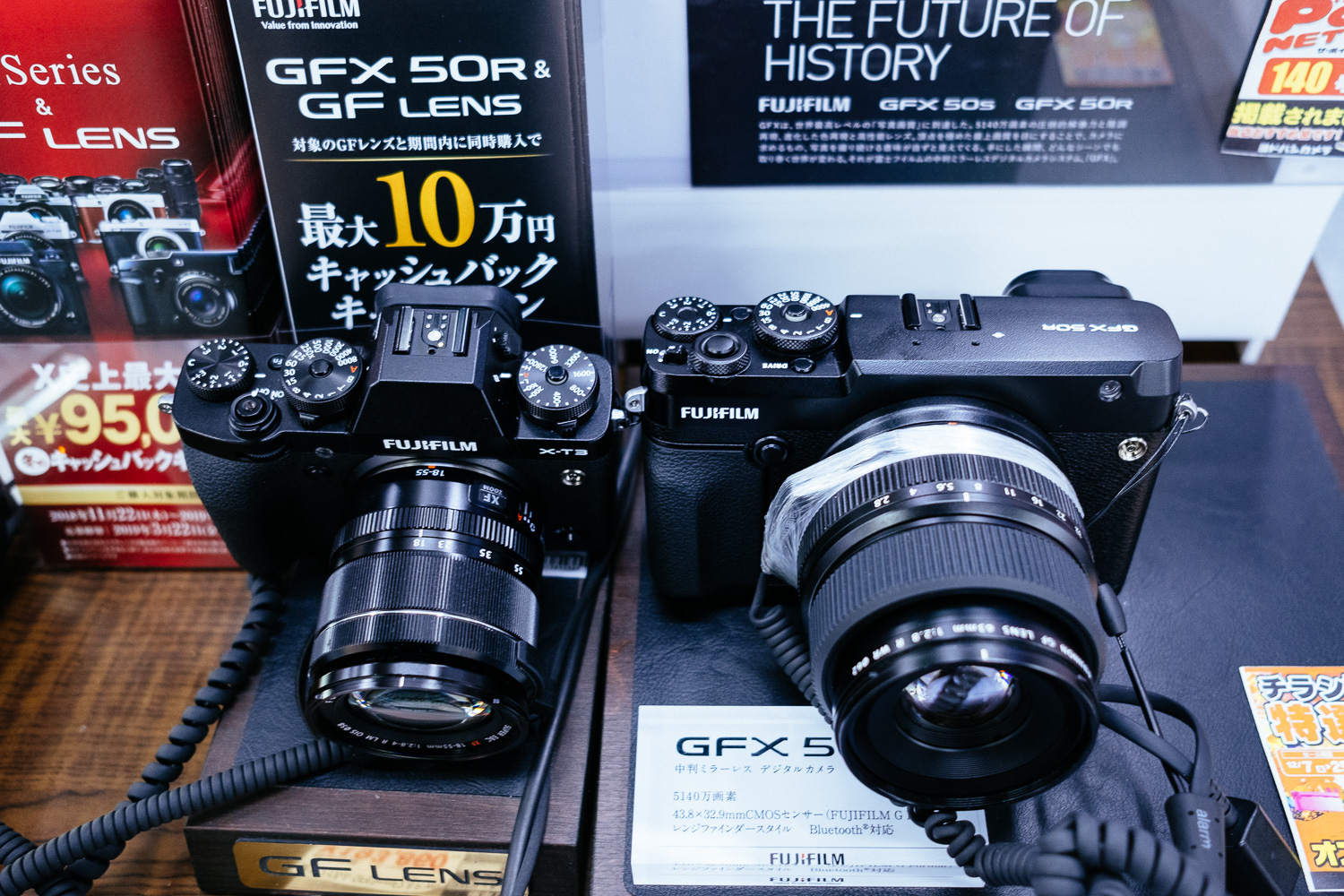 At the end I returned to the Fuji GFX 50R for one more hands on time. I can see the attraction of the larger format but I’m not sure about the GFX. It’s considered the medium format camera for traveling but it lacks the elegance of a Mamiya 7. I have put the Fuji X-T3 beside it just to give you an impression of the size but strangely it doesn’t look that big in the image. It feels big in my hands though and I’m used to an X Pro-2 which isn’t exactly a small camera.

The biggest drawback for me beside the size of the lenses is the shutter sound. It’s better than the shutter sound of the Hasselblad H1D which sounds like it might break any second but it is still ugly compared to any other camera that I have tried that day. The Fuji GFX 50R is definitely a camera that you should try before you buy. 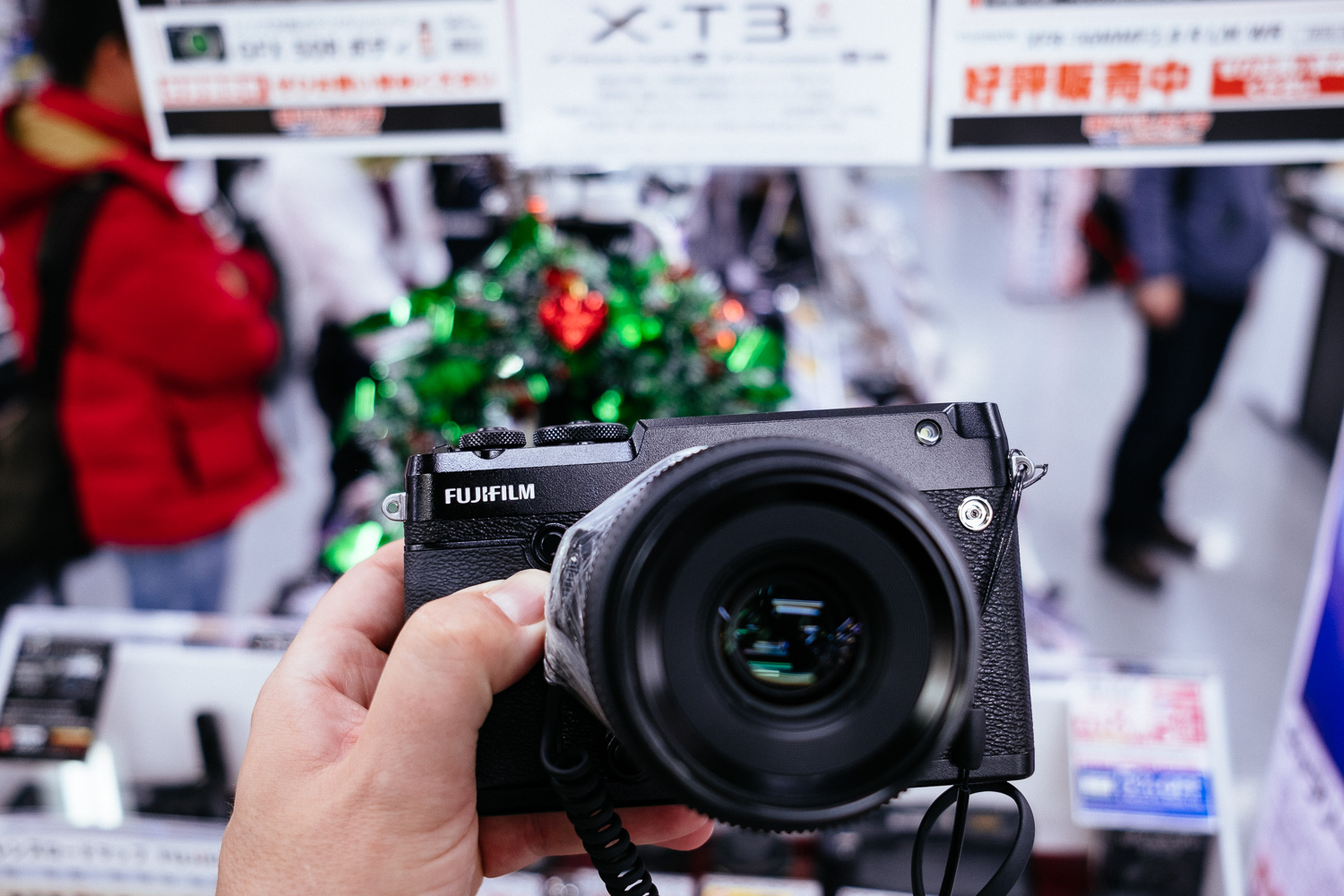 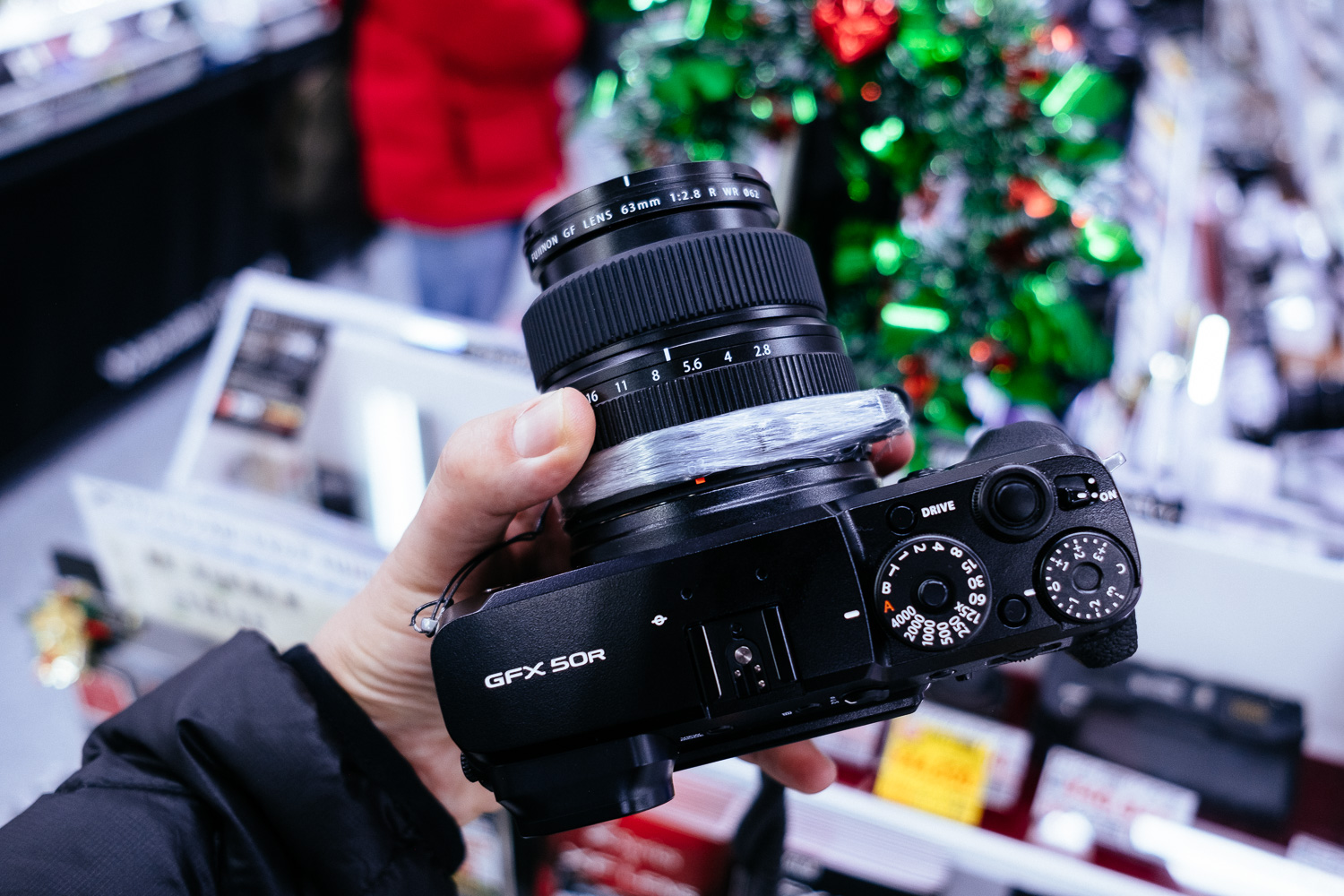 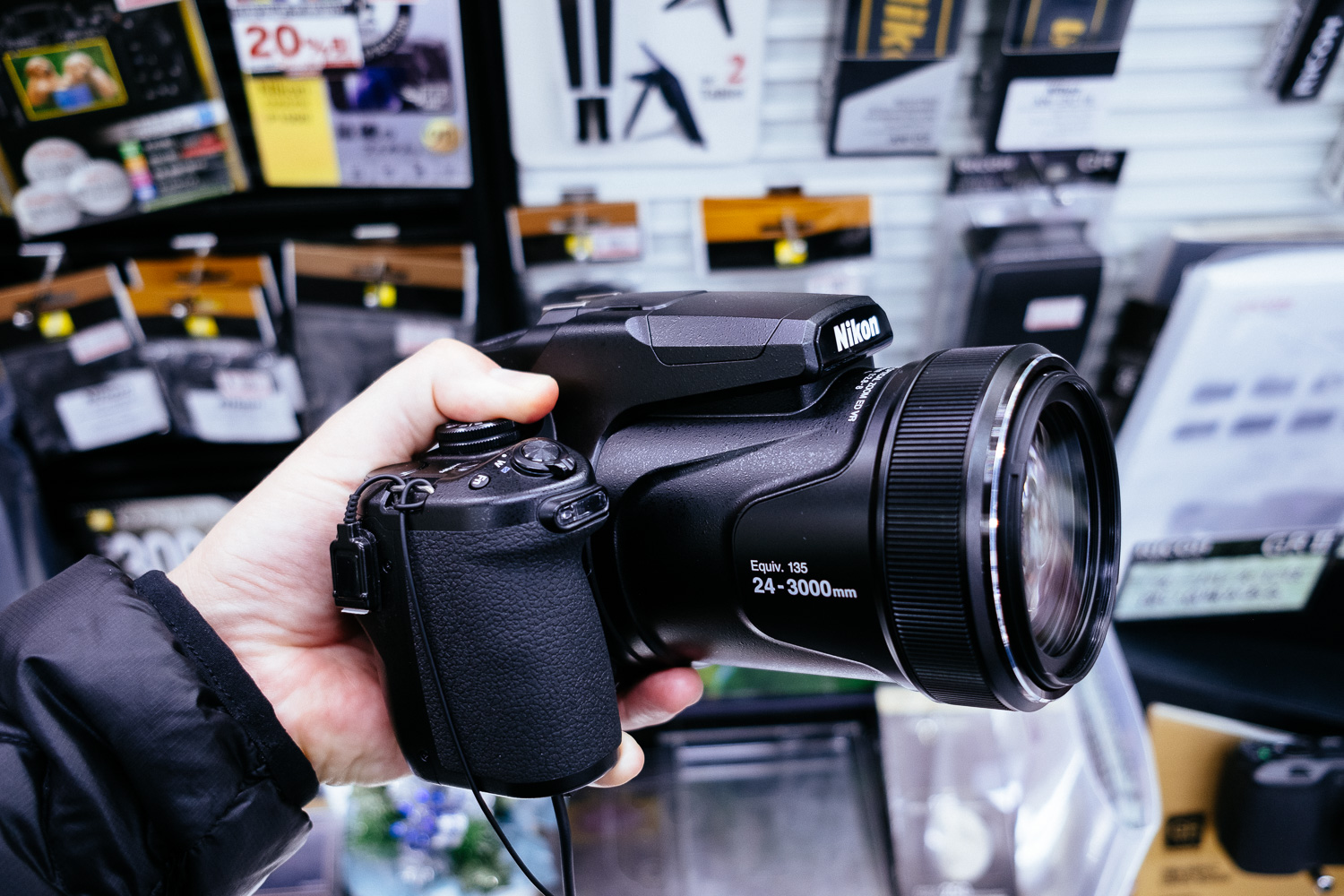 The great thing about Yodobashi camera is that you can try everything without the need to ask a sales person to show you the stuff. That’s why I also had a look at two cameras that I would never consider to buy. One was a Nikon camera with a small sensor but the size of a full crown DSLR. But the reason is simple: a 24-3000mm zoom. That’s what I call an excessive zoom range.

And last but not least a Sigma dp2. I finally understand the strange grip of this thing. It’s a selfie camera for lefty’s like me. Because the way I hold it in the image is the only way it makes sense to hold the camera. With the left hand and the lens facing yourself.

That’s it from Yodobashi. I’m quite happy with what I have today but I might have a closer look at the Fuji XF8-16/2.8 R LM WR again before my next vacation. 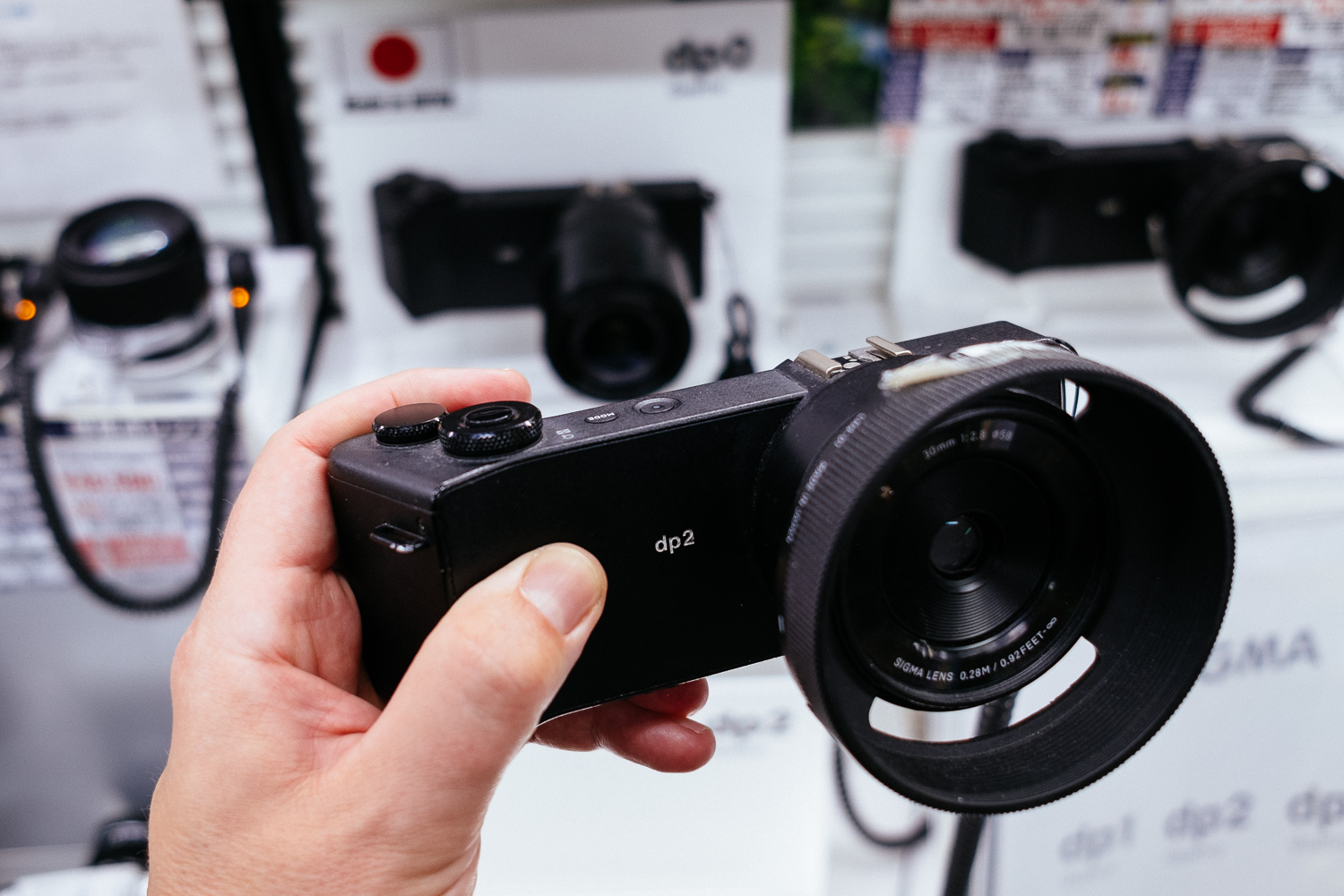