In May I was in Korea for the first time. The other Korea not the crazy one from the news. It’s maybe a little less exotic but it’s great.

I arrived the day before the first meeting to relax from the flight and to adjust to the local time. Of course I would never sit around in the hotel. Right after I had a shower I went out and I knew exactly where to go: The Dongdaemun Design Park designed by Zara Hadid. The famous architect who sadly died last year.

The centre is not exactly close to my hotel but the public transport in Seoul is excellent and easy to use for foreigners. What a difference compared to Japan where it’s next to impossible to get around without help.

I had to use Seoul’s transport system quite a lot because my hotel was placed in Gangnam (yes, the one from Gangnam style). A hip part of the town full of fancy shops and restaurants but a little far away from downtown. And since Seoul is a city with a population of 25 million in its metropolitan area it was a 45 minute trip to get to downtown. 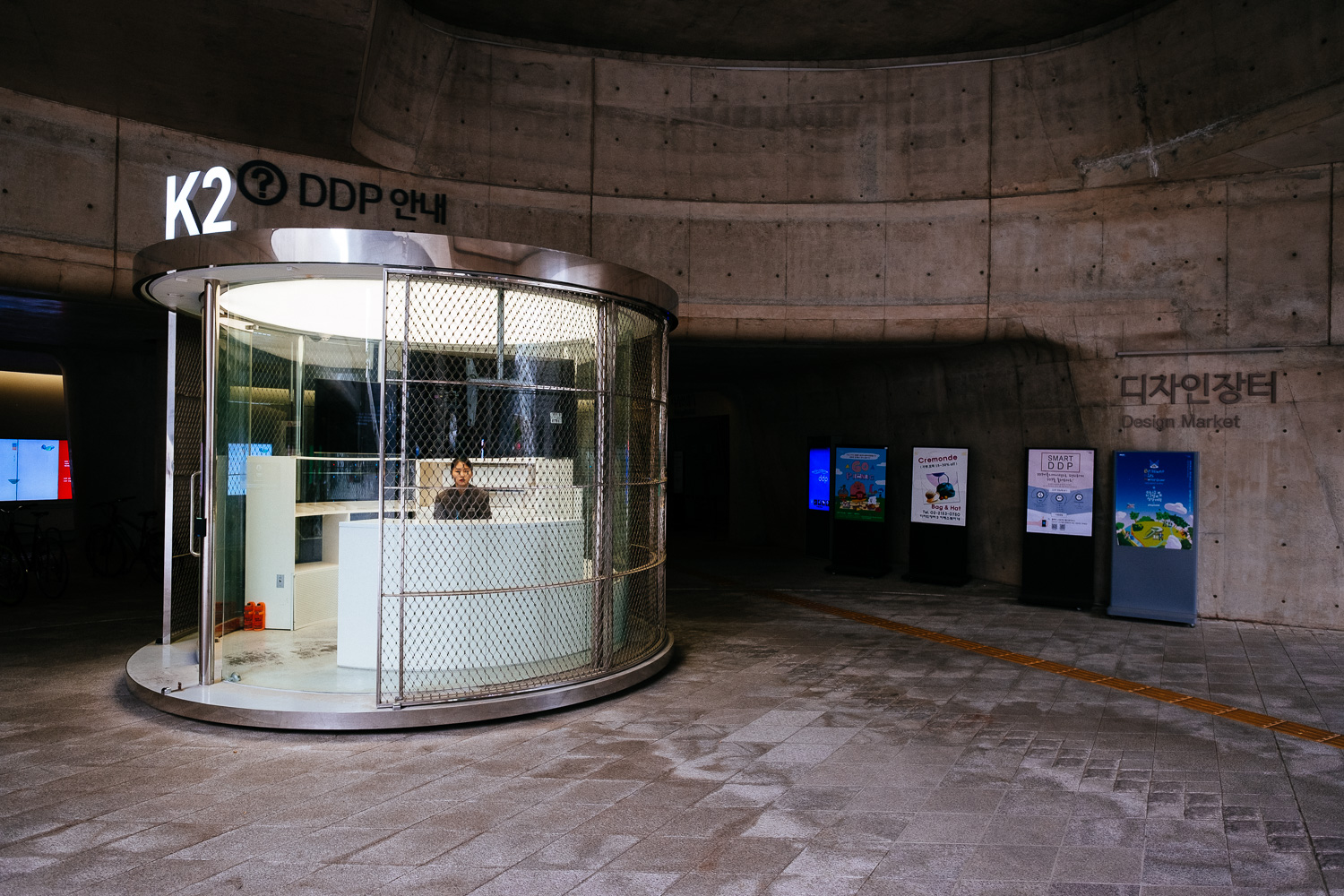 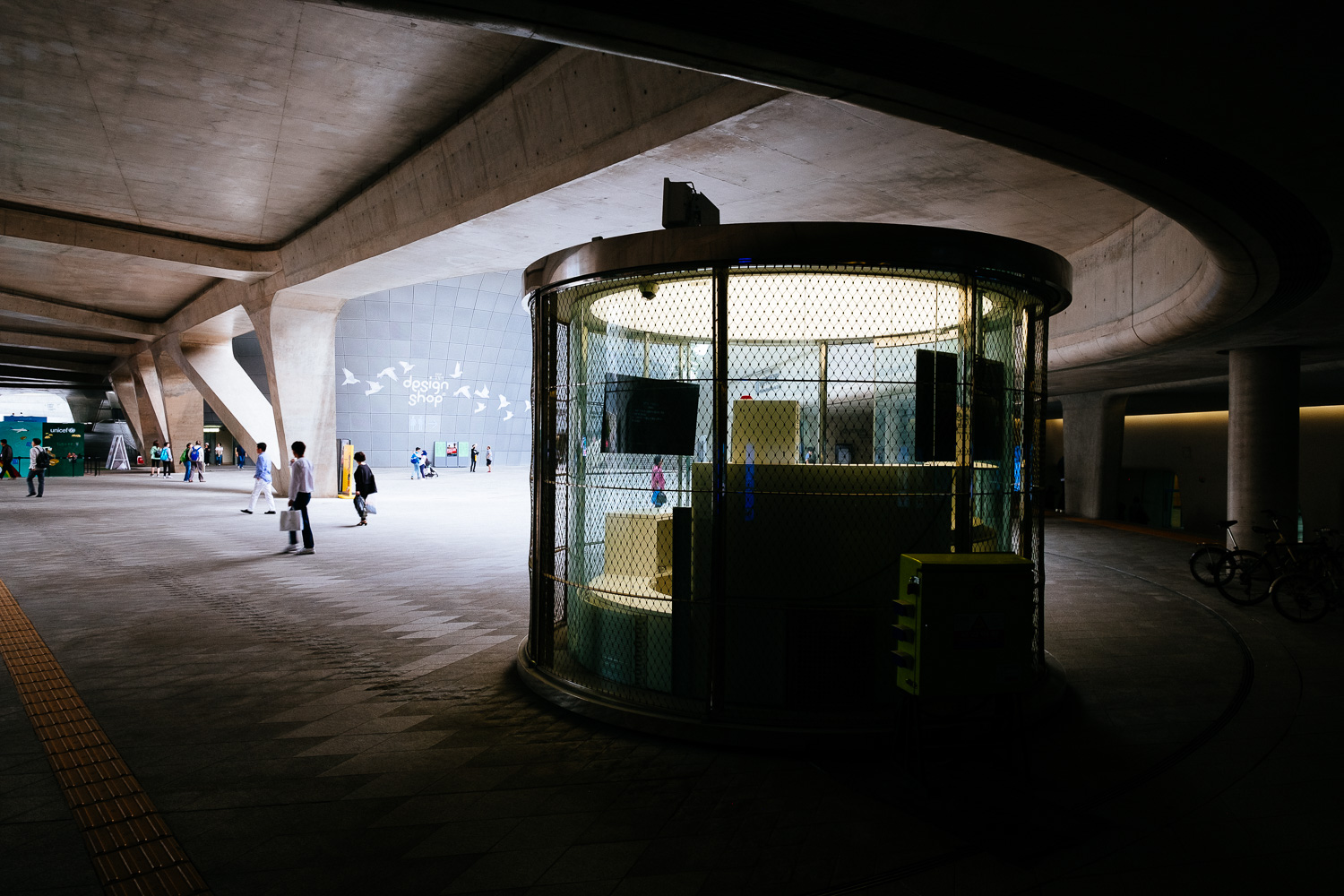 When I arrived I was a little disappointed because I expected the building to be much bigger. There are some truly fantastic pictures of the complex, the best of them taken at the blue hour.

But when I arrived it was just after lunch time and the light was anything but great. It was also clear that I would not be able to stay long enough to see the complex at night. I was just too tired from the long flight. So I focused on some shots inside the complex first. The picture above is my favourite. There is a very nice contrast in between the dark corners and the strong daylight. I also love the bow over the round the lit info desk.

I quickly learned that I have to make sure that the people are far away from the camera in order to keep them small. The smaller the people the bigger the construction. The great architectural shots of the design centre that I saw in the internet work exactly like that. They only show people in the background or close to it. Like in the shot below or in the image of the info desk above. A rather simple discovery but it was very hard for me to change my shooting style. In street photography you want to get as close as possible to the people but here it is better to keep a distance. 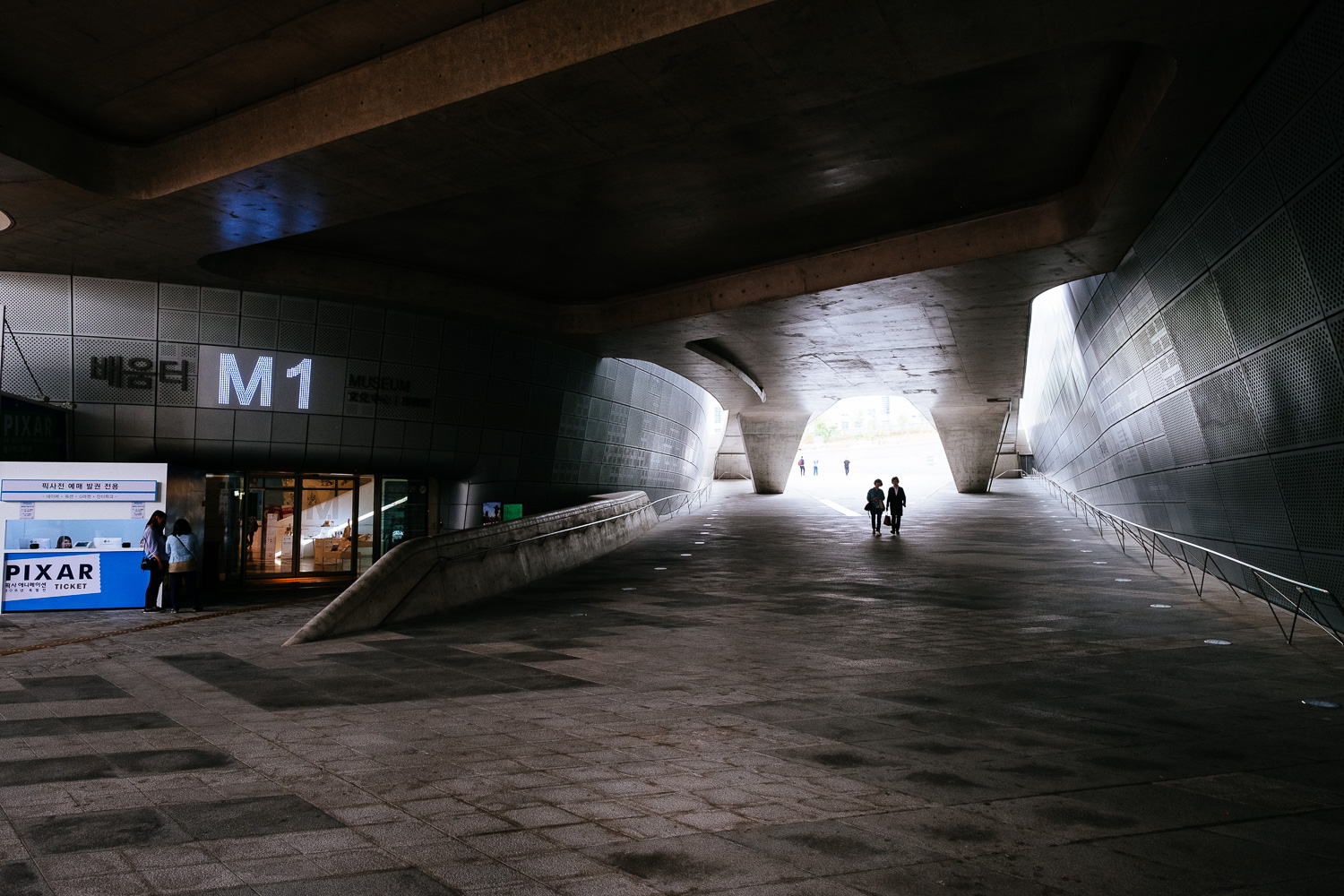 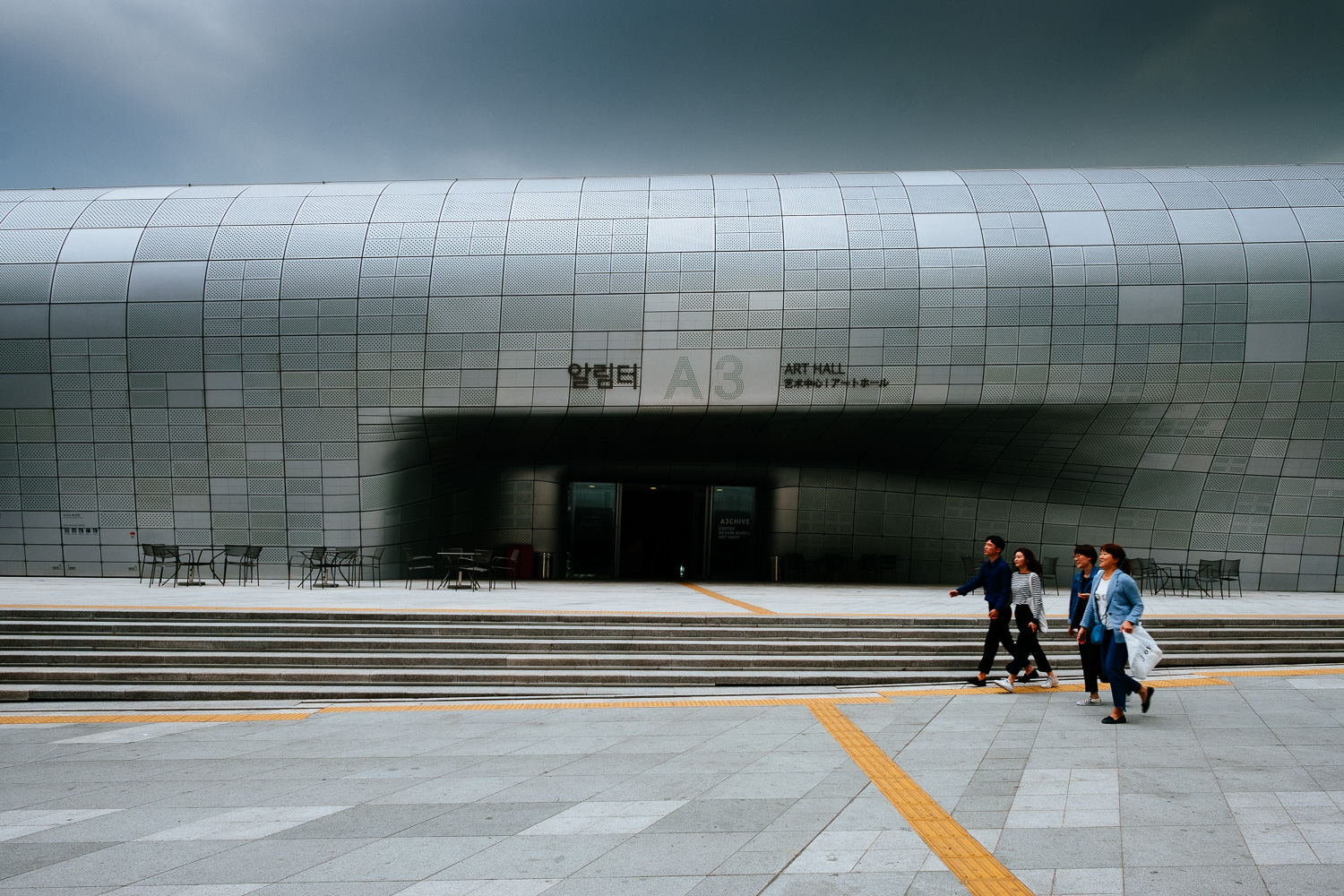 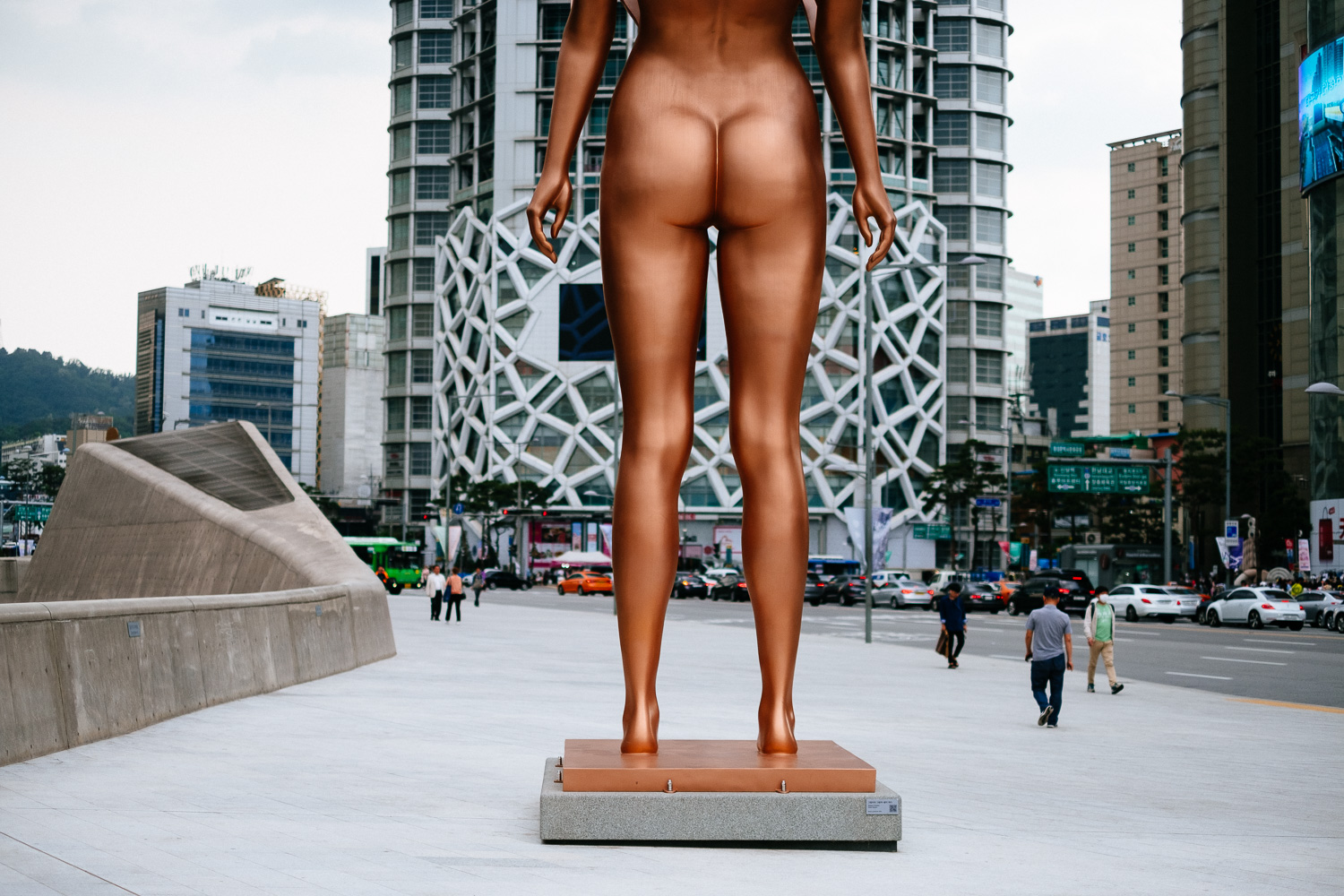 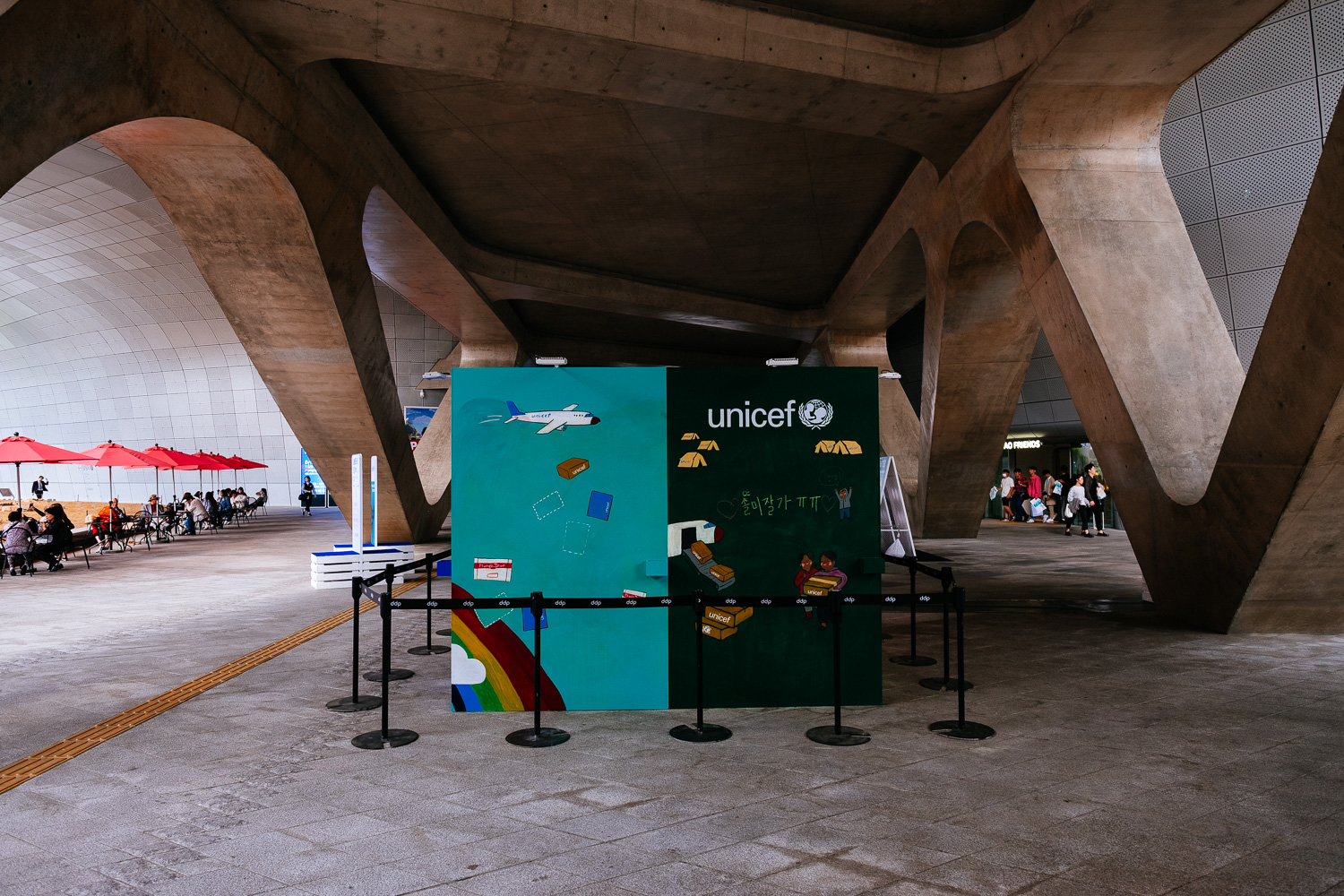 On this trip I carried three lenses: the XF 14/2.8 R, the XF 23/2 WR and the XF 35/1.4 R. This has become my perfect set for those business trips where I want to keep photo gear light but also want to have a very capable equipment to fully enjoy photography in my spare time. Those are the lenses I take if I plan to take pictures on the weekend in an exotic location. There are no long lenses but the reason is simple: I only stay in mega-cities and for me there is no need for a long lens here.

I always carry all three lenses because they are so light and small that I never consider to leave one in the hotel. I did that a couple of times when I took the XF 56/1.2. That’s why I finally replaced it again with the XF 35/1.4.

So I had all three lenses with me but beside the “naked lady” image all shots I posted here are taken with the XF 14/2.8 R. For me this is the most important and best lens in the excellent set of lenses from Fuji. It was the first lens that has been introduced after the initial three lenses when the launched the system. I got it when it came out in March 2013 and since then it has become my favourite lens even though I also have other real pearls like the XF 16/1.4 WR, the XF 23/1.4 R and the XF 56/1.2 R. 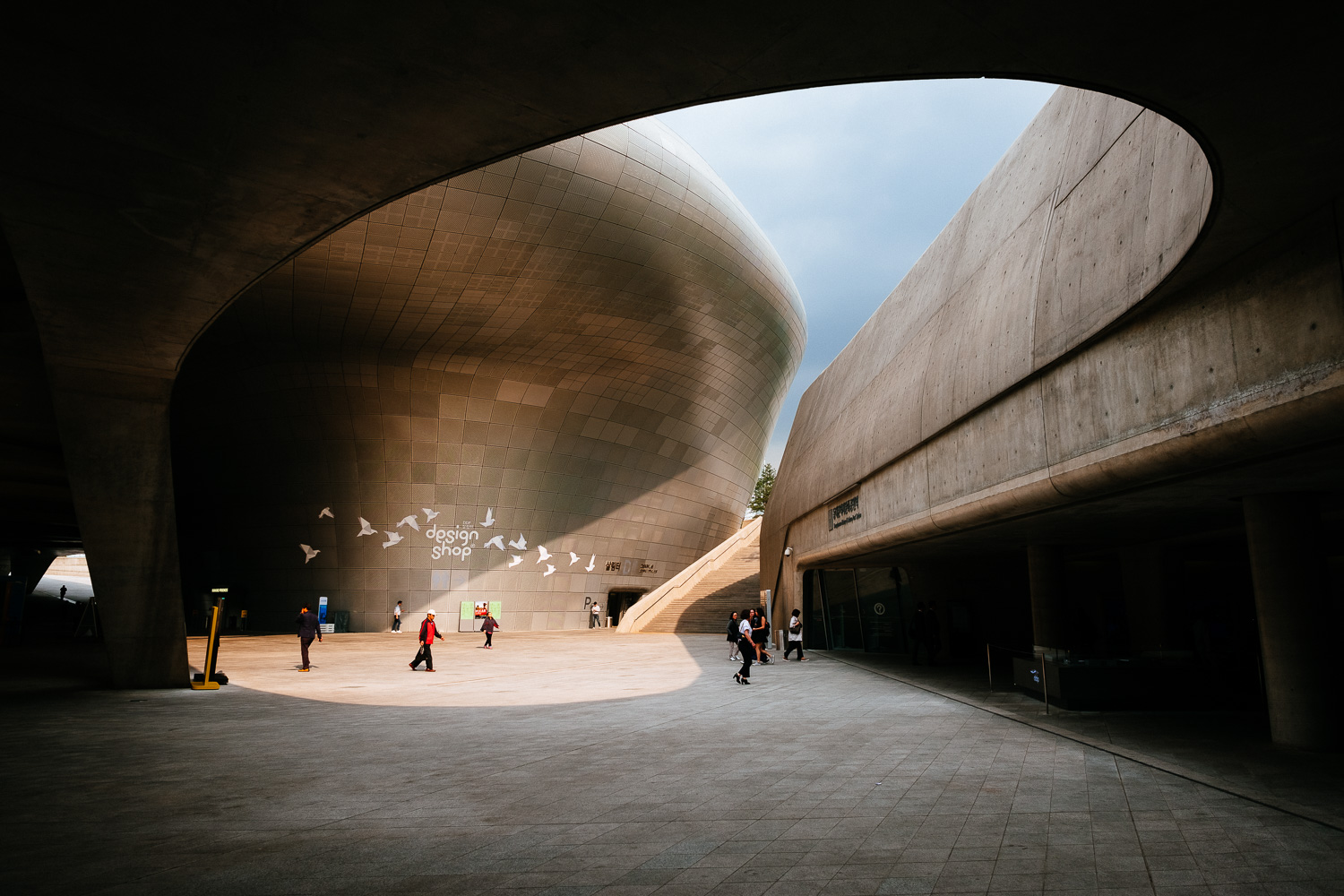 What makes the XF 14/2.8 R so special? First of all this lens is not only optically excellent and built to last it is also small and light. When Fuji started the X system in 2012 the introduced the X Pro-1 together with three small but fast prime lenses. I got the XF 18/2 R and the XF 35/1.4 together with the camera. It was a game changing experience for a DSLR shooter like me. Photography was simple again and fun! I later replaced the XF 18/2 R with the XF 14/2.8 R and I added much more lenses but the biggest joy I always have with the small primes. That’s why I prefer the XF 23/2 WR over the XF 23/1.4 R even though the later is the better lens optically.

But the XF 14/2.8 R is not only small and light it is also super sharp and there is practicably zero distortion. I have no idea how Fuji managed to do that but this is a very impressive feature for such a short focal length. I know that today even an image taken with the Canon 24-105 L looks fine once the lens correction is applied in Lightroom but there is a difference. If you look through the Canon lens you see the distortion, you see how straight lines bend when you frame the shot. It’s ugly. With the XF 14/2.8 R a straight line is a straight line and that’s a big thing.

At the end I was lucky to get some very nice light. The sun and especially the dark rain clouds in the sky helped to get a balanced shot. I went for a contrasty look with deep blacks to accentuate the organic bows of this complex building. 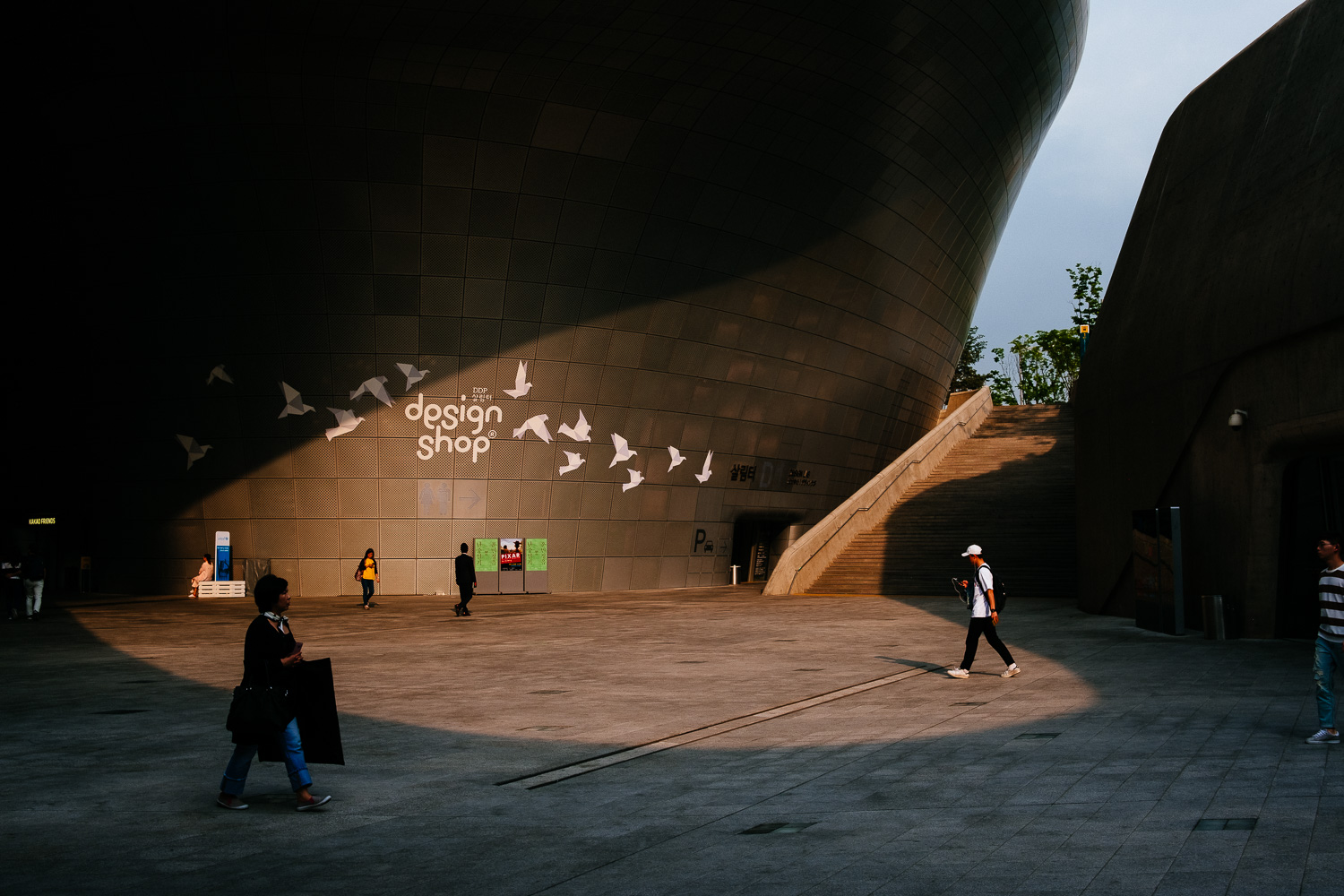